The small twin prop plane dropped, recovered, dropped, swung from side-to-side, recovered and finally, finally dived for the runway. Snow splatted against the window and through it I could see thick fog and the ground and fog and the ground – and the ground was approaching fast – then I caught sight of a terrified face, eyes so extended from sockets they could have been on stilts. My face. ‘What the hell’, that’s what the locals would say, but what the hell appeared lame for my condition. I hate flying in small planes and when I booked the flight to Portland, Maine, I didn’t quite appreciate what the final stage of the journey would entail. I counted how many times I had landed and taken off from Lukla Airport in Nepal, the most dangerous airport in the world, it was fourteen and here I was in one of the most advanced countries, about to check out in a blaze of gory.

My present condition needed more than ‘what the hell’ it definitely needed expletives and loads of them. Why at times like this did I always picture being ripped apart and then my whimpering bloody pulp being fried like chicken wings.

The plane hit the runway, skidding and swerving, an animal attempting to shake the snow from its aluminium coat. Engines screamed. I nearly screamed, but it slowed and slowed and then pulled up at a gate.

The door opened and the pilot greeted the ground crew,

I’ve now been in New Hampshire for a week. The first few days were taken up with the Mount Washington Ice Festival, a crazy thriving festival of the likeminded, but then the climbing began, and I blame that flight – nothing could be as dangerous or as scary as that could it? 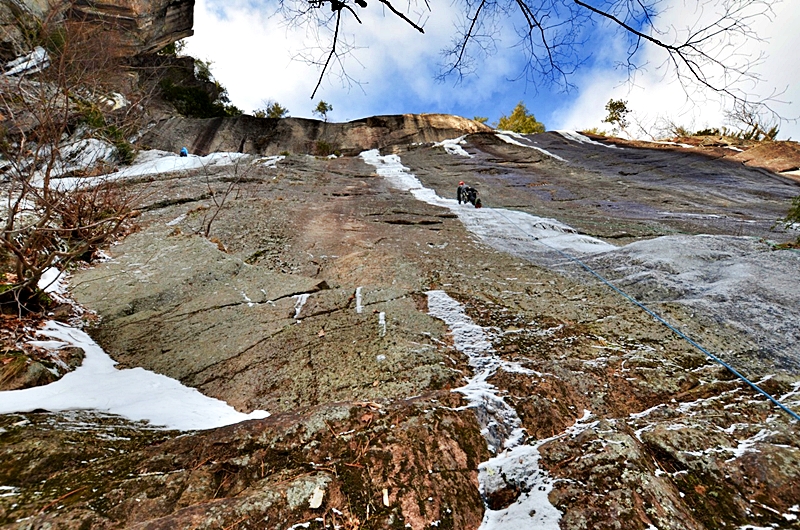 Nick Bullock on Still in Saigon. Possibly the first winter ascent of a streak that runs by the side of the summer line. My first ice route in a while which was OK as i didn’t need to think of how to place gear. Kev Mahoney. 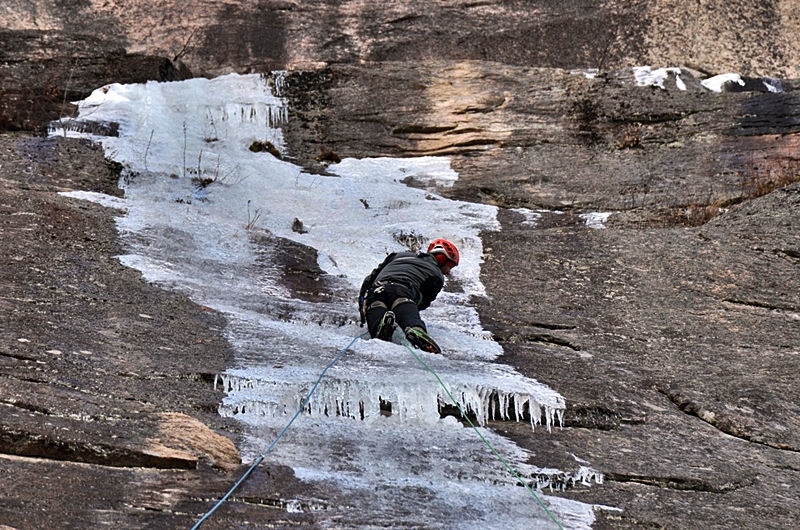 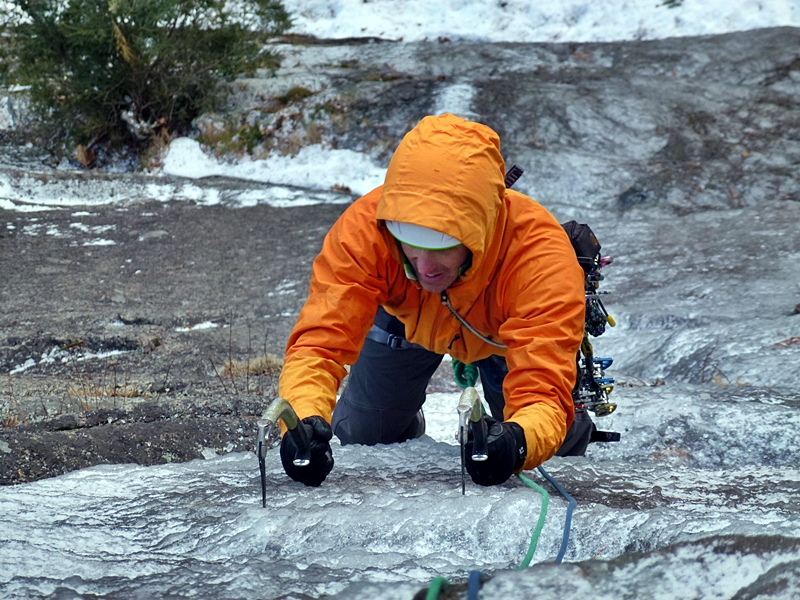 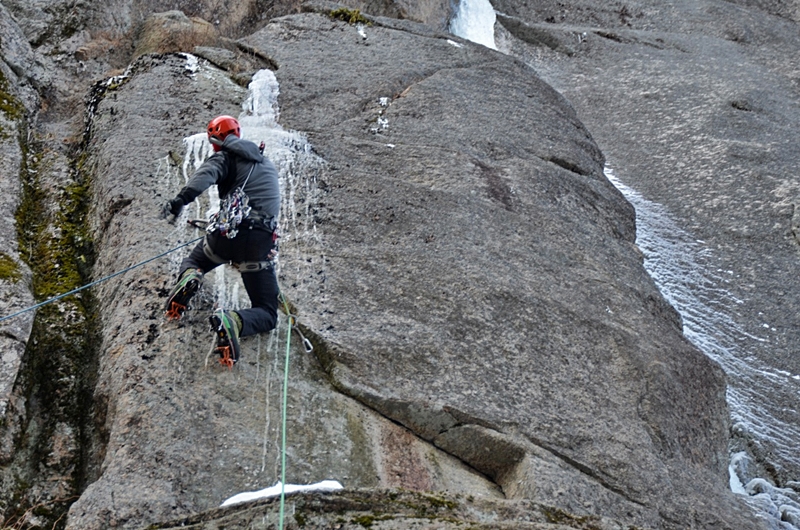 Nick Bullock climbing an un-named climb first climbed by Kev Mahoney and Ben Gilmore at Cathedral. Its a bit spicey said Kev, no shit said I, as I torqued my way up the creaking expanding flake, which had the gear in its creaking mouth . Kev Mahoney. 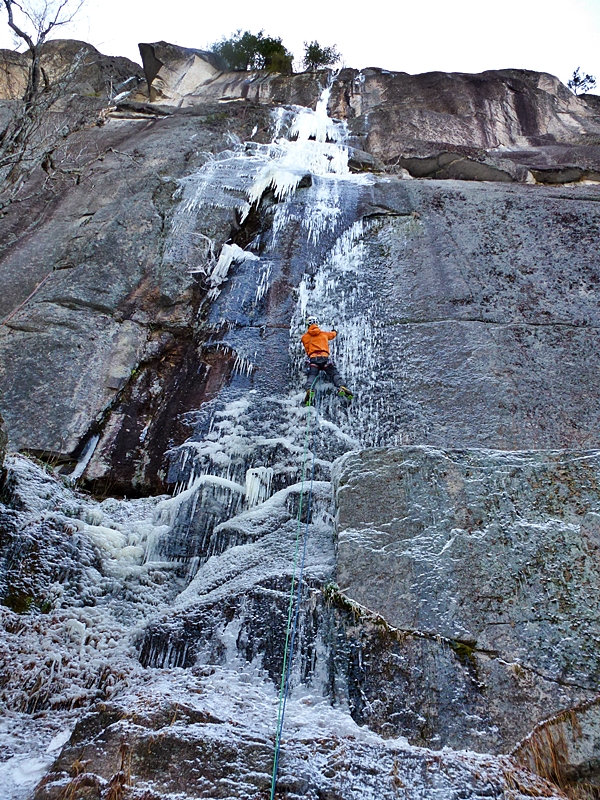 Kev Mahoney sets off on Remission Direct. It has only had a few ascents and never in this condition. Nick Bullock 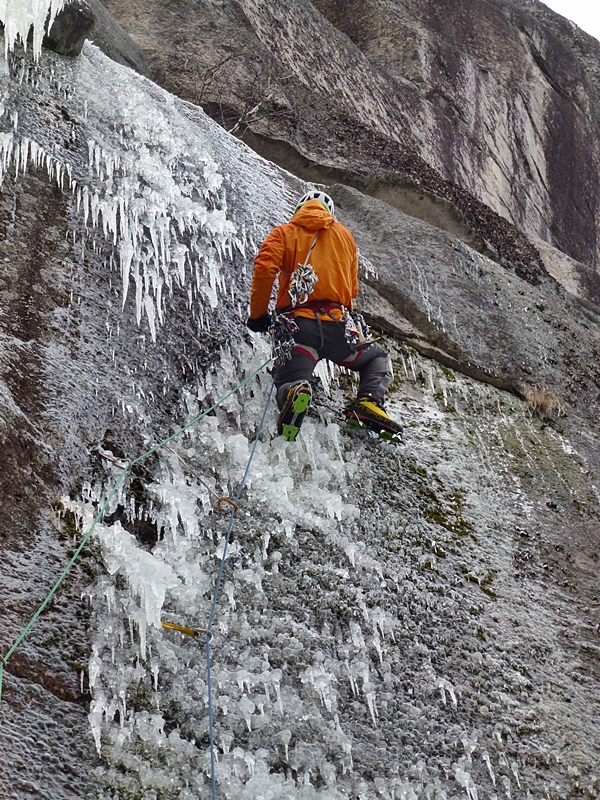 Kev Mahoney reaches the point of very little ice and very little gear. Run away! Day one on Remission Direct comes to an end. Nick Bullock. 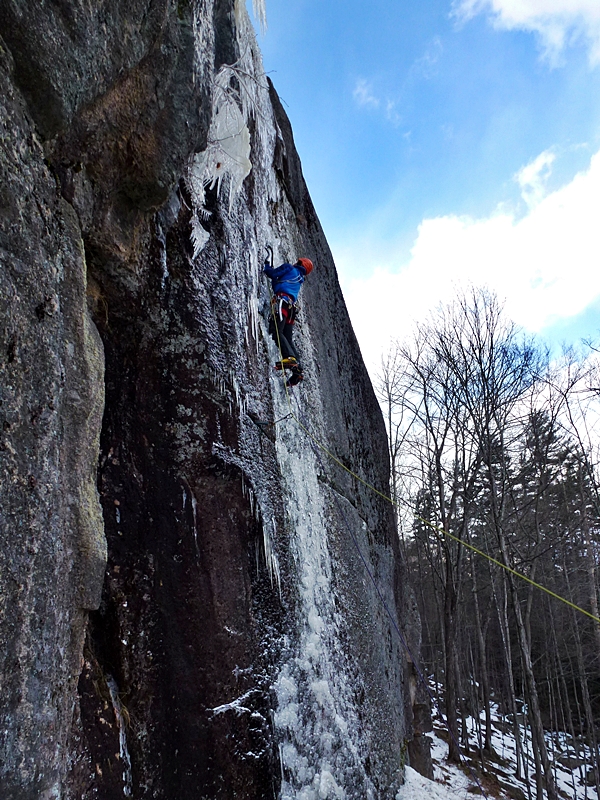 Day two, Matt McCormick takes over after I take a thirty foot fall from above the roof. There is a bolt but on the first go I couldn’t reach it from a powerful and scary styne-pull off the overhang. Nick Bullock. 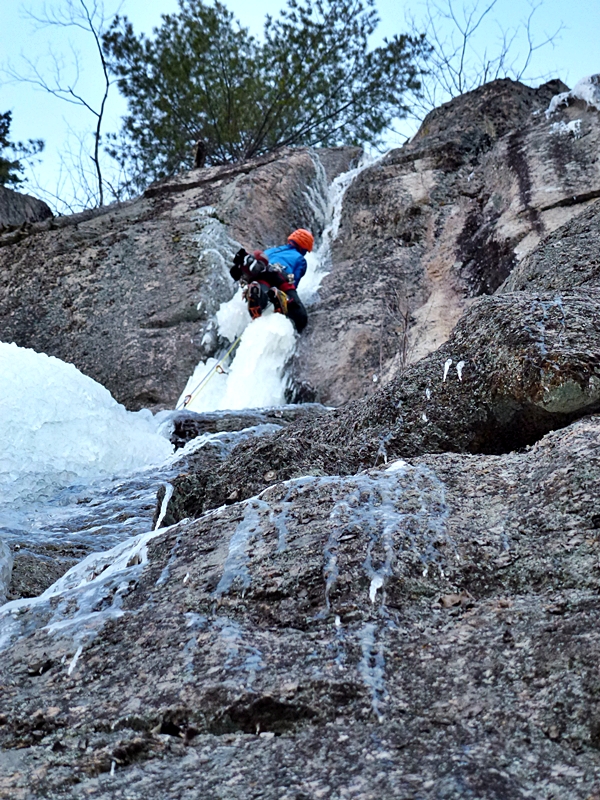 Matt backed off the direct start, (sensible) and I returned armed with a hex (not sensible) and mangaged to pull like a train with the hex as protection, and eventually clipped the bolt to sketch my way through the bulge, leading Matt to the slightly fatter second pitch of Remission. Nick Bullock 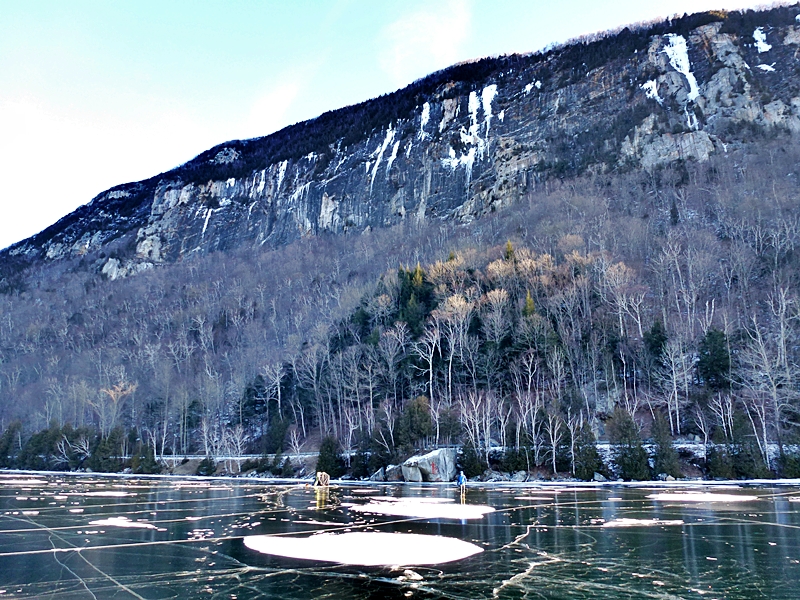 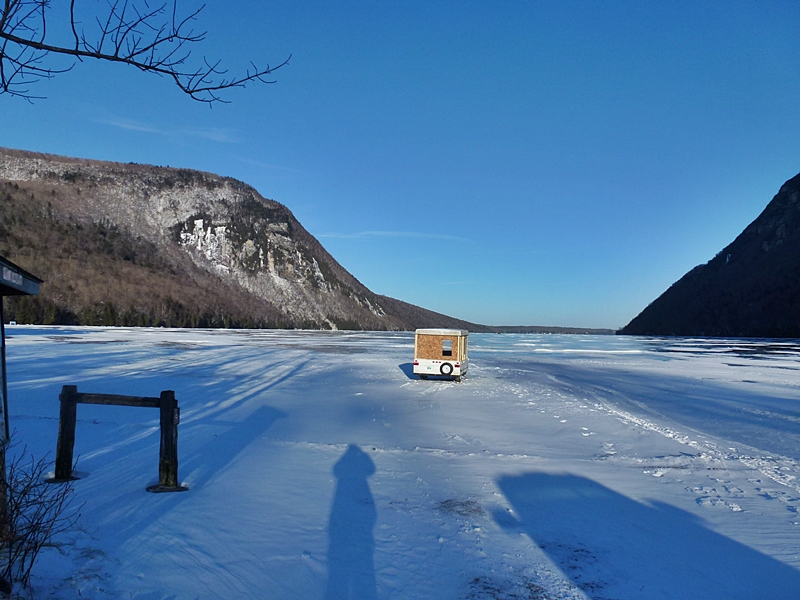 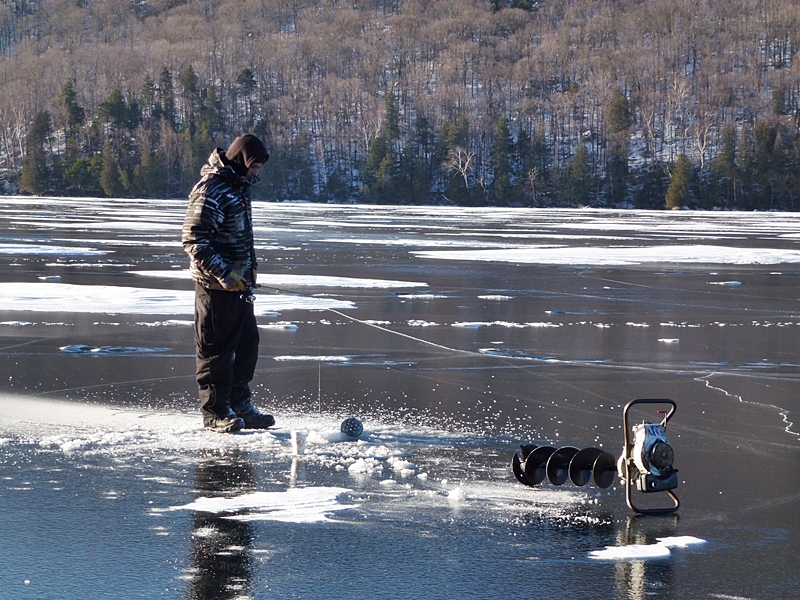 And I thought ice climbing was odd! 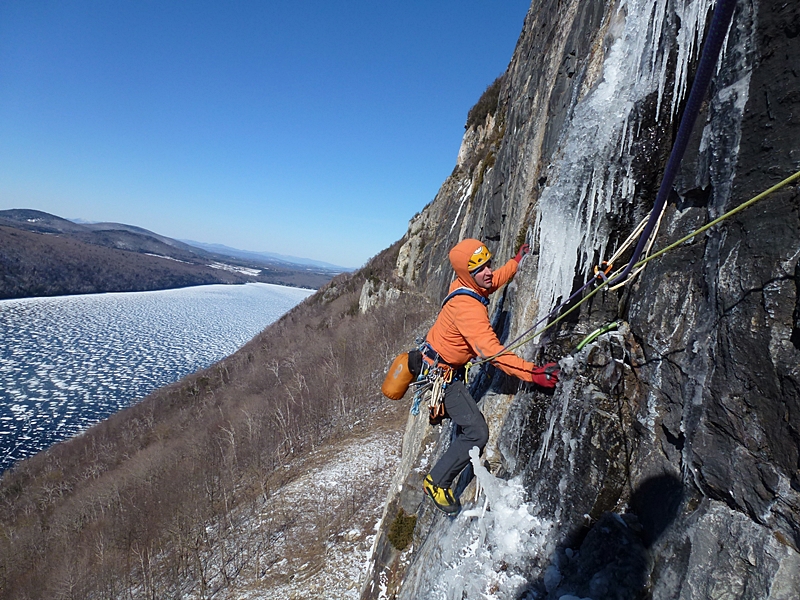 Bayard Russell on the third pitch of Astroturf after Matt McCormick had run the first and second pitch together. Nick Bullock 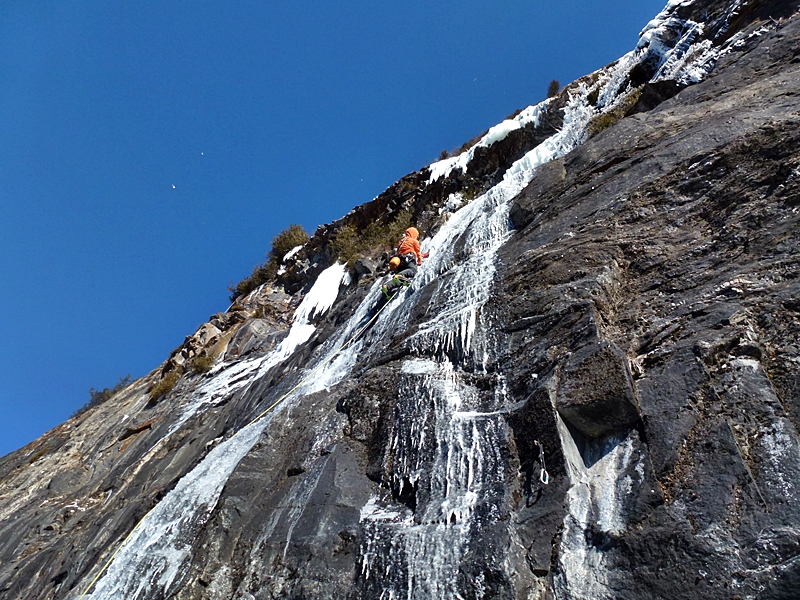 Whats becoming a common New Hampshire theme, even though Lake Willoughby is in Vermont. Bayard Russell on the run-out, thin-ice, third pitch of Astroturf. Nick Bullock 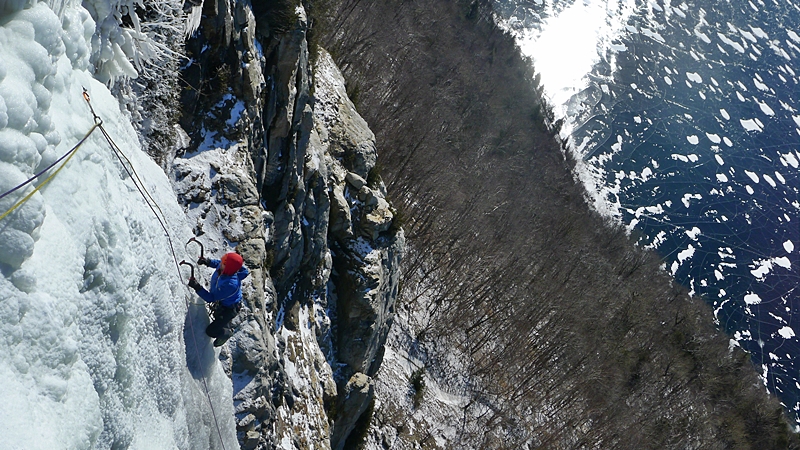 Nick Bullock approaching the belay on the third pitch of Astroturf. Baytard Russell. 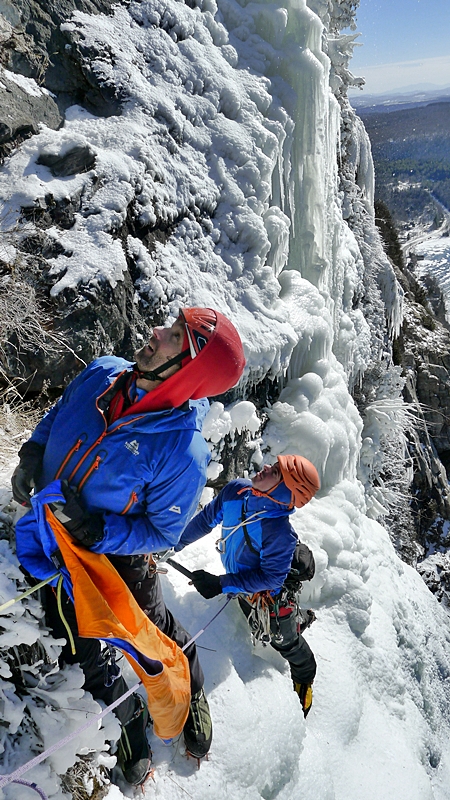 It goes where? Matt McCormick knew what was coming as its his route. I didn’t. Bayard Russell. 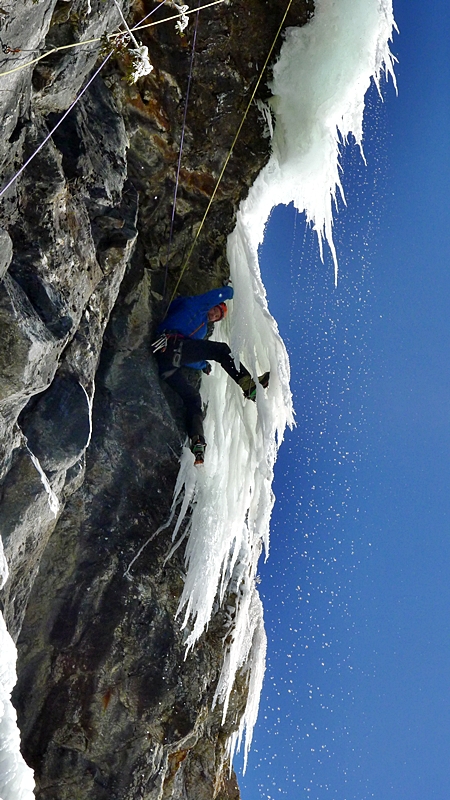 After climbing to the roof directly above the belay and finding a massive ice roof where all previous ascents have not had one, I gingerly minced right, after swinging around for a while, aiming for an ice fringe. No gear, few footholds, but ice on the horizon… make a B-line! Engauge arms, dis-engauge brain! Bayard Russell. 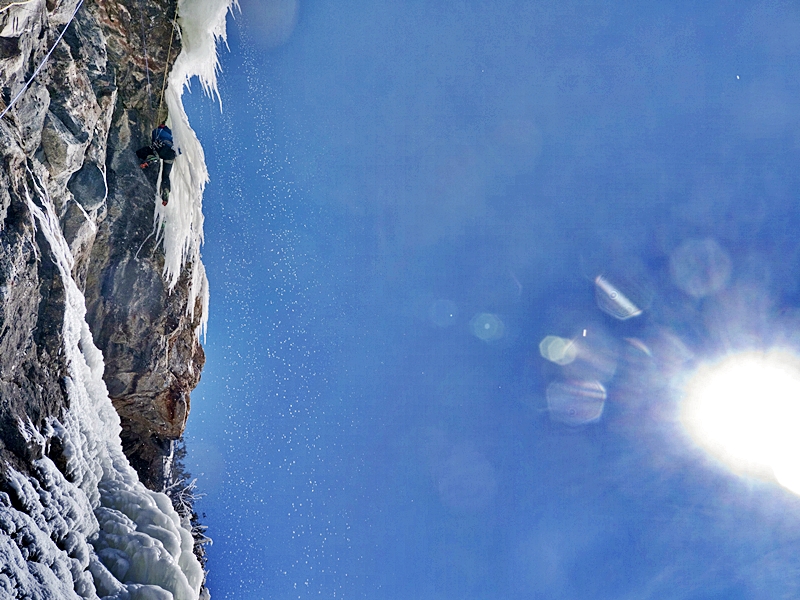 On the fringe. Nick Bullock climbing a new variation of the crux pitch of Astroturf. Its a weak mans way but a strong head is required. Matt McCormick

5 Responses to Live Free or Die.