Who Has the Right? 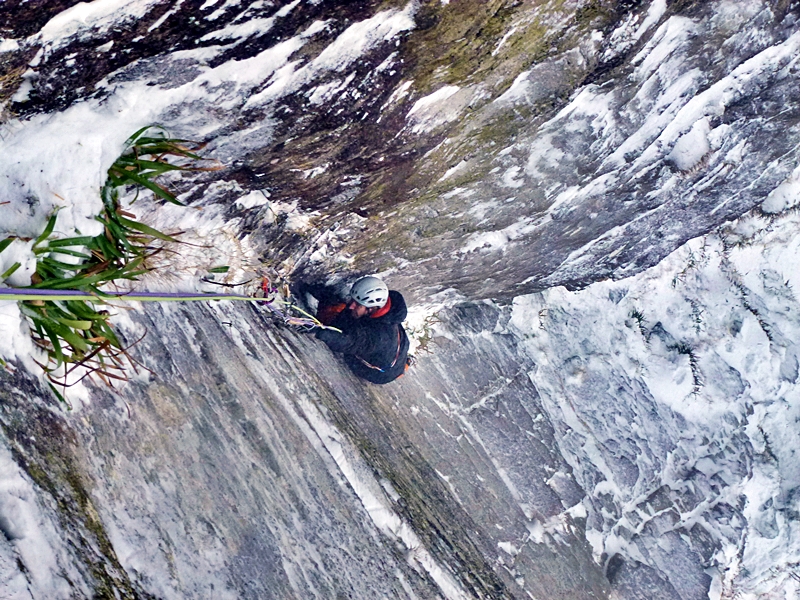 Winter climbing for me came to an end on Monday 8th with the ascent of Nevermore on Lochnagar. Nevermore is a summer E2 and in the aftermath, as I prepare for rock climbing in the rain of North Wales, I suppose this is as good a time as any to reflect on an issue and a blog post I was pointed at a few weeks ago.

I often read John Appleby’s well written blog To Hatch a Crow and enjoy doing so, but recently John has taken to shouting rather loud about winter climbing in North Wales. Some of the issues John raises are valid and I agree, but on occasion I feel he lets himself and his usual excellent standard of writing down.

As far as I know John Appleby does not mix climb to a high standard, I’m not sure he winter climbs at all and at times he appears to confuse himself. In one post, written in December, a post about winter climbing in unfrozen conditions and damaging the flora and fauna, I shared a similar feeling, but then in a separate post, he states it is fine to rip loads of vegetation from the cliff so it can be cleaned for rock climbing. Both obviously damage so why is one more acceptable than the other? And the only answer I can come to is it’s because one is for rock climbing, something John understands and participates and the other is about winter climbing, something he does not participate in,(?) and given some of his recent comments, he does not understand.

He is obviously very passionate about climbing in Wales, but his passion sometimes appears to cloud and his viewpoint comes across as ranting and ignorant and arrogant. His writing, normally balanced and intelligent, has the feel of uncontrolled anger and includes derogatory terms and hyperbole.

“With autumn tumbling into winter, the work was done. Just a wait for spring to arrive in a few months before it could be re-climbed in pristine conditions. And then the winter warriors arrived A friend who was aware of these events commented glumly ‘probably scratched to buggery now!’ Who knows? However, given the lack of vegetation and the line the routes takes, it’s a fair bet that it could only be climbed by almost dry tooling it. It’s an oft debated issue on the climbing forums. The point when winter snow & ice climb becomes a dry tooling ascent.” John Appleby.

‘Winter warriors’ I am not a warrior Mr Appleby, I climb for the challenge certainly and on occasion the fight, although the fight is generally with myself, but I also climb for the friendship and connection with those I climb alongside, for the joy of the environment and the mountains and the history which is captured within these climbs. I climb in spring, summer, autumn and winter and I have done so for nearly twenty years, and in that twenty years I have possibly climbed two lifetimes worth of rock, ice, snow and big mountains. Please try to take this into consideration when you make sweeping and ignorant comments about the style in which I climb.

John, your friend should go and climb The Great Corner and then report how scratched it is, because I think she/he will find there is very little damage, maybe even none at all and certainly in our ascent there was nothing like the environmental damage caused by the savage gardening I know took place as your friend who cleaned this climb is also my friend. It is a surprise to find that someone like yourself, who obviously has intelligence, would so readily reduce to speculation and assumption without any evidence.

A few years ago I was involved in a meeting arranged by Simon Panton and Baggy, as was Pete Harrison my partner on The Great Corner. The sole aim of the meeting was to thrash-out some of the more delicate issues surrounding winter climbing in North Wales; what is deemed fair game, what is out of bounds for winter climbing, ethics etc. I don’t remember you being there John, but maybe I’m mistaken. In that meeting certain climbs and crags were deemed not for winter and personally I would have added more. Certain rock routes on the Glyders, routes that have pristine rock and very little vegetation, would in my mind, be out – but they are not – and that’s what the majority has decided so that is what I will accept as climbing is for everyone.

The Great Corner is one of the most obvious winter climbs I have climbed in Wales, it truly equals some of the great Scottish winter climbs. This very rarely climbed summer route made a magnificent winter climb and in my mind makes a much better winter climb than it does a summer one – speculation I know as I have not climbed The Great Corner in summer, but speculation appears abundant around this topic. (If the weather is kind this summer I will endeavour to change this.)

I came to the conclusion a few years back that a climb like many on Clogwyn Du and even the crag itself have more to offer in way of the winter climber than the summer only activist, this is shown by the large amount people who climb in winter on Clogwyn Du in comparison to the one or two who climb on the crag in summer. When this is the case the crag or the climb should be recognised as such and valued for what it is and how much joy it gives in its winter garb.

John uses some quite confrontational and derogatory language in his post,

“It’s a shame really as there is certainly a death or glory mentality amongst winter warriors who prefer to see their name in lights than effect good practice in climbing.”

Who is this aimed and what is the evidence? Have I missed several deaths this winter while the ‘warriors’ have been attacking the cliffs in Wales? Or is it once again ignorant speculation and hyperbole? I certainly do not have a death or glory approach to my own winter climbing. The skill needed to climb top-end winter routes is high, and if Mr Appleby had any depth of knowledge about the topic he would know that routes above a certain standard are not ‘peddled’ they have to be climbed precise and very much in control.

I will agree that on Clogwyn Du the scratches and the scars made by crampons on El Mancho really did shock me. I found it difficult to believe that such damage could occur as the placements for the picks were so positive. If the leader is well prepared in both techniques and fitness to attempt a climb of this standard there should be hardly any peddling.

Fortunately we do not have crag police and a climbing proficiency test to pass before we are allowed onto the winter or summer cliffs and so people will push there grade, all be it on some occasion a little too soon and damage will happen, but who has the right to say what is correct and what is wrong? Well, I suppose everybody and nobody. Is there a way to solve the problem, if it is a problem as climbing is different things for all of us – well possibly by talking cohesive and been informative and making people think more about their preparation and the consequences of their actions will help, but damming rebuke that offends, attempts to belittle and alienates in my mind just doesn’t cut it.

4 Responses to Who Has the Right?