Elfyngate… (AKA, a thinly disguised advert for Llanberis Resoles.) 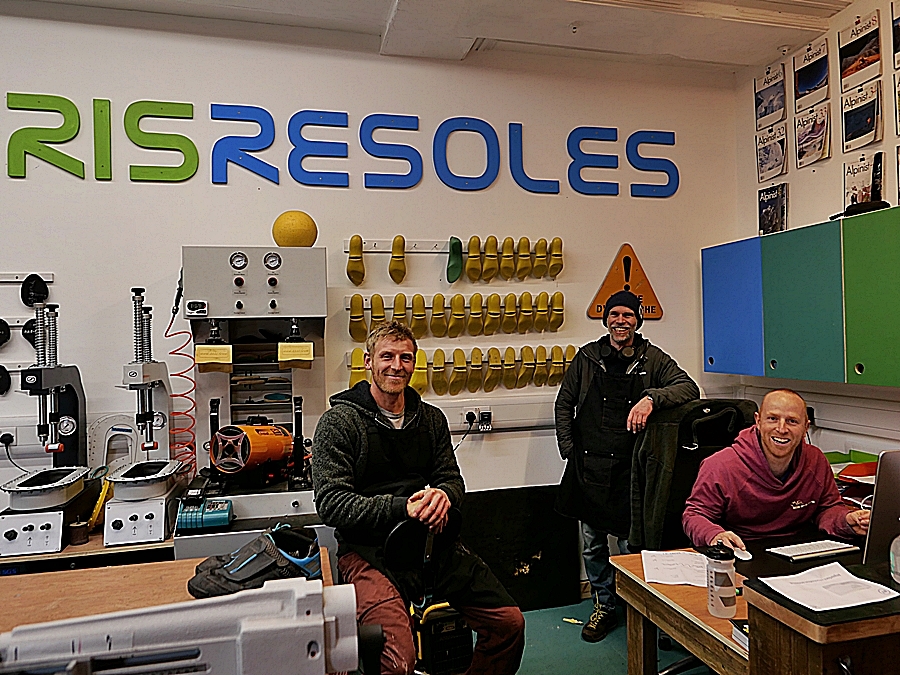 I walked into Llanberis, the pavement was damp and dark. A chilly breeze from the centre of town funnelled between houses. It was winter, so I suppose anything other than pouring rain was a bonus. Passing the gated entrance to V12 Outdoor, the old chapel that is now a climbing gear shop, (other climbing gear shops are available) I turned right and headed up the metal staircase attached to the outside of the building. At the top of the stairs was a door, and at the side of the door, a sign; Llanberis Resoles. I knocked on the door and waited…

[I have only had climbing shoes resoled once, about twenty-five years ago, (I’ve been fortunate to receive free shoes for quite a while, (thanks Boreal) but after seeing what the resoled shoes of friends looked like, and with all the Covid and Brexit difficulties for businesses, I thought, what the hell, I’ll save Boreal a bit of expense and export hassle, (Gaining back control since Brexit is a wonderful thing isn’t it!) and I’ll pass on a bit of cash to a local business. Also, becoming more conscious of getting things repaired, (in a small attempt to do a bit for the planet) helped me with the decision to part with cash, but it was touch and go and kept me awake for several nights!]

…Torquil, the owner of Llanberis Resoles, opened the door. I’ve known Torquil for several years since he first moved to Llanberis. I like Torquil, he’s a tad quirky and down to earth and like me, a bit scruffy. He climbs, summer and winter, and is a keen cyclist, although at the moment is recovering from breaking his femur after hitting at sheep at 60mph (ouch!). As the story goes, the sheep ran away unharmed, but I’m no vet, so this is pure speculation on my behalf. Torquil has built up his resoling business over several years and now employs two other friends, Jimmy ‘Big Guns’ McCormack and Llyr Hughes. Unlike Jimmy, Llyr doesn’t have his first and last name separated by ‘Big Guns’ which is a tad confusing because he’s built like Thor, god of thunder, (which, by coincidence, is where the name Torquil originates) and in a gun-off competition, I reckon he could hold his own against Jimmy! I asked Torquil if a prerequisite for working in the business was having massive arms, he assured me, it wasn’t.

[I also know Llyr’s dad, Alun Hughes, the adventure filmmaker of, to name a few, Birdman, Upside-down Wales and Stone Monkey. A year or two ago, I stood in The Beacon Climbing Centre chatting to Al, (Llyr was also climbing) and I couldn’t help turn to Al and say, “Holy shit, where did he get those arms?”  Without hesitation, Al turned, stared me in the eyes, pointed to his chest, and said, “I made those.”]

…I walked into the brightly lit workshop and lent against the wall. Torquil handed me my repaired shoes and I (reluctantly) fished for my wallet. “Tell you what Nick, put something up on Social Media about having them done, and you can have the repair free.” I don’t really do advertising apart from for my sponsors, (And I don’t really do that very well!) I dislike Social Media, and I’ve exceedingly high morals, so, after much deliberation, (nanoseconds) snapped his hand off, but I said I wouldn’t do Social Media, I’d write something on my blog, (God only knows, with everything going on and being stuck in the house in a Cwm Y Glo all winter, anything that motivates me to write is welcome!) with the caveat he should be careful for what he wishes, because once writing, I’m never sure the direction my rambling will take. Torquil said this was fine, he’d take a chance. I then went on to explain that I never really appreciated the reputation my scribblings had, until one day last winter when I was in the Beacon Climbing Centre… 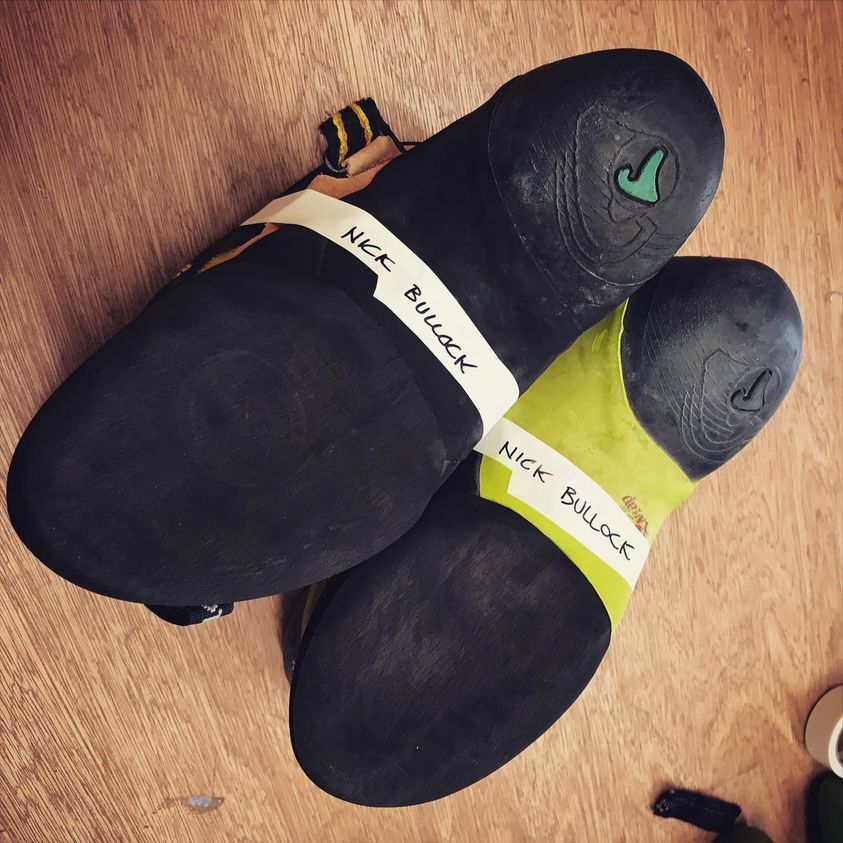 … I never take indoor climbing serious, only a fool would get wound up about indoor climbing, and getting obsessive about plastic routes, now that truly is a sign of utter craziness. On the day in question, I was climbing in the Beacon with Keith Scarlett and Zylo. I had rested for two days in anticipation of the session, because I was on my fifth day of attempting to successfully climb, ‘The Black’ 7c+, a beautifully crafted Alex Mason climb of much intricacy and difficulty. It was a Saturday, I had rung ahead and asked for the skylight to be opened so the connies were crisp. Unfortunately, the word was out that the grade of, ‘The Black’ was soft, so crowds were flocking, but as luck had it, none were here, so, I warmed up, refined a few moves, methodically brushed each hold, then sat down for a while.

After resting, I stood up, and began some quirky Ian Curtis dance while imagining the moves, then strutted towards MY climb. But, just as I reached the rope to tie on, someone stepped left and began to climb a yellow 6b+ that weaved in and out of MY route. Reluctantly and deflated, I returned to the bench and sat down. They wouldn’t be long, share and share alike, but at that very moment, they had a take, and began working the moves! How could they do this, this was MY section of wall? I untied and very graciously suggested to Keith, and Zylo, they should go and climb elsewhere, while telling myself that it was OK, the day was young. But, just as I thought the day couldn’t get any worse, in through the door came one of the other climbers I knew was working MY route. I panicked then because I knew they were weirdly obsessive, (who would get like that!) and once established, I knew they would hog the route all day. BOLLOCKS! I’ll could do something else, but the route was going to be stripped soon, and I had rested for two days, and the connies were great, and I had been awake for nights visualizing myself clipping the chains… I had to do it.

As predicted, the other person proceeded to hog the route, on one occasion they even left the rope clipped to the first draw while resting! I was very angry. How could they be so inconsiderate? To make matters worse, they were getting higher than me, and making the climb look relatively easy. Then, the inevitable happened, they only went and did it! If my eyes could shoot lasers, I swear, they would have been toast, but instead, through gritted, almost gnashed-down tooth-stubs, I gave a tight-lipped smile, and grunted something along the lines of, oh, how marvellous.

At least with their success, I would get my chance, but I had to wait for a while until the person who had just done MY route left the building, but my chance did arrive at last…

The first difficult moves felt OK. This is it! More difficult moves led to the only shake-out on the climb. I hit the shake-out hold with aplomb. Bloody hell, I’m so good! It’s going down. This is it! I began my well-practiced, shake-out and psyching-up procedure and then decided to take a quick look down. What the hell, Elfyn, bloody, Jones – BMC Cymru Access & Conservation Officer, the little wanker, was climbing beneath me, and he was on the yellow 6b+ the route that weaves in and out of MY route. Elfyn is actually a good friend, but at that moment, I hated his happy go bloody lucky smiling face, how dare he be so happy? I continued to shake-out, but with every happy move Elfyn made, my panic and anger rose. I was on the edge of breakdown and shouted, “Do the BMC not give lessons in how to look up and see where a route goes, you’re the bloody access officer for crying out aloud!?” I thought Elfyn would apologize because, without doubt, this was a catastrophic mistake on his part, and he would surely lower-off, as, let’s face it, my climbing was way more important than his, but no, he just kept coming and happily said, “I thought you’d fly up that route Nick, superstar that you are, what’s your problem?” This was just too much and before my brain hit total meltdown, I shouted, “TAKE”.  The vein in my forehead almost burst, but just when I thought he couldn’t make the matter worse, he looked down and shouted to the others, “Oh no, I guess I’m going to get a blog written about me now.” Which everyone (apart from me) thought hysterical!

So, the moral of the story is threefold; it’s a thinly disguised advert for Llanberis Resoles, purveyors of a quality service that cost me a bit of writing, (bargain) as the shoes were well repaired at a very good rate! All enquiries can be made here, Llanberis Resoles.

Two – The BMC should have indoor route reading night school for their employees, and three, never get obsessive about plastic, it’s the road to madness.

7 Responses to Elfyngate… (AKA, a thinly disguised advert for Llanberis Resoles.)