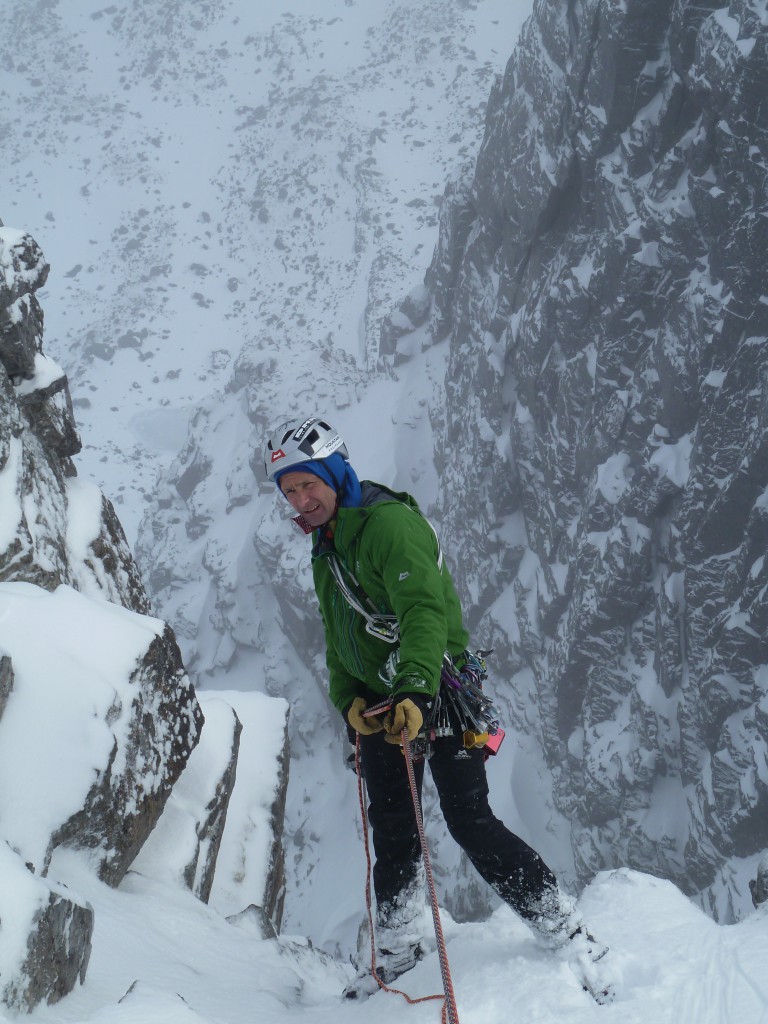 When the going is good, it’s generally only a matter of time before shit happens. Call me a cynic, but this is what I believe. (Well, unless you are Matt Helliker, then no matter what, you come out smelling of freshly baked bread.) So for us normal folk, you realise this and accept, when the going has been too good for too long, you are about to be dealt a muck cart piled high. If you cant deal with this you just have to roll over and give up or take up sport climbing.

Climbing Godzilla on Beinn Bhàn was definitely good… so, as I’m running at one new route per trip north, I should have gladly accepted this and driven south. Another fact of life is climbers are greedy. I’m especially greedy. I’m a glutton for experience and adventure, but of course, this leads to the inevitable, good-shit, bad-shit scenario…

Andy Houseman and I walked in to Beinn Eighe on Thursday to climb Blood Sweat and Frozen Tears. Pumped on success and the thought that I was actually going to get two climbs in on one trip, I merrily ignored the above mentioned rule. Mistake!

Standing opposite the climb, balanced on the craggy dinosaur spine of the central buttress, looking down into a Huntsmans Leap type cleft, it’s not that obvious where Blood Sweat and Frozen Tears actually goes. The wall is steep and overhanging and a series of grooves and corners and overlaps make spotting the line difficult. The wind buffeted, snow poured down the face. Eventually, we decided where the top of the climb was and carefully kicked around the ice and the snow curling the top of West Central Gully until we stood, all geared up and ready to go.

Finding some tat wrapped around a huge thread well back from the top of the cliff, the voice in my head shouted, ‘overhanging cliff, traversing climb, overhangs, abseil point well back – bad shit scenario – change the abseil station to nearer the edge of the cliff’. But did I do this, no, of course not.

I scuttled over the edge of the cliff. The wind blew, the snow stung, big burly cumulous clouds scudded and as I lowered over the edge, I felt a weight. The bad shit scenario fairy fluttered and with glee settled on my shoulder. I looked down into a maze of corners and cracks and thought, ‘Ah well, there will be something obvious.’ There wasn’t of course and sixty metres down, I had been drawn toward the big girdle ledge and a stuck wire in a groove just above it. We certainly needed to be directly beneath the ropes as they would never pull from the side, surely there will be some gear placements to construct an abseil point? The fairy on my shoulder sniggered and egged me on. Landing on the snowy ledge it soon came apparent that this was the wrong place and actually there was nothing to abseil from. “Bugger.”

After crawling around, I spotted some tat about ten metres to my right, but the ledge I was now slithering narrowed into a tight horizontal chimney and no way was I going to solo-squirm along this to reach what I now concluded was the line of Blood Sweat and Frozen Tears.

I shouted to Houseman and asked him to go to the top of the Central Buttress to check out the line before coming down. The bad shit scenario fairy was dancing a Michael Flaherty jig along the ledge and kicking off loose blocks while river dancing

.
‘Ok, no problem’, my mind concluded, running through the scenario – Houseman abseils to the correct station – pulls the ropes – abseils again – picks me up on the way – simple.

The fairy shook her head in a, ‘No-it-isn’t dickwad,’ kind of way, and continued with her jig.

Having checked the correct line, Andy launched over the cliff and found the abseil point about fifteen metres above me and hidden in a large corner to the right. Out of sight, he now began to pull the ropes… “It’s pulling, its pulling, its pulling… Bollocks, it’s not pulling…”

I held my breath and began to think of get out of jail scenarios. I imagined soloing the rubble strewn ledge into West Central Gully to my left… then after clenching my buttocks, I thought no more.

“Shit, the ropes are stuck and the other end is now out of reach.”

The bad shit scenario fairy fluttered around my snowy ledge. A big cheesy grin spread long across her smug face. I tried to swat her but she buzzed around and gave me the finger.

Much tugging and pulling and swearing and huffing and puffing went on above my lonely ledge and never did the joyous shout of liberation come. After a while it became apparent the only option was to cut the rope.

The wind whistled around the cliff and fresh snow collected on ledges before hissing down the pink rock. I felt alone. Then i felt a wet slither down my neck. Looking up I watched the bad shit scenario fairy wet herself with laughter while hovvering directly above.

After some time, two ends of rope dropped onto the ledge to my right, swiftly followed by Houseman… He looked over and began laughing. And I lay on my ledge laughing. “Why are we both laughing, this is serious.”

Houseman pulled the piece of rope as I shuffled on my stomach inching toward him along the ledge. The bad shit scenario fairy was not looking so happy now, and she flitted in and out from the cliff throwing handfuls of snow at me. “F*#k Off” I swatted her and in doing so, nearly rolled off the ledge. Houseman laughed and I laughed and with a belay now fixed, he threw the frayed end of rope, which I caught and tied to my harness. 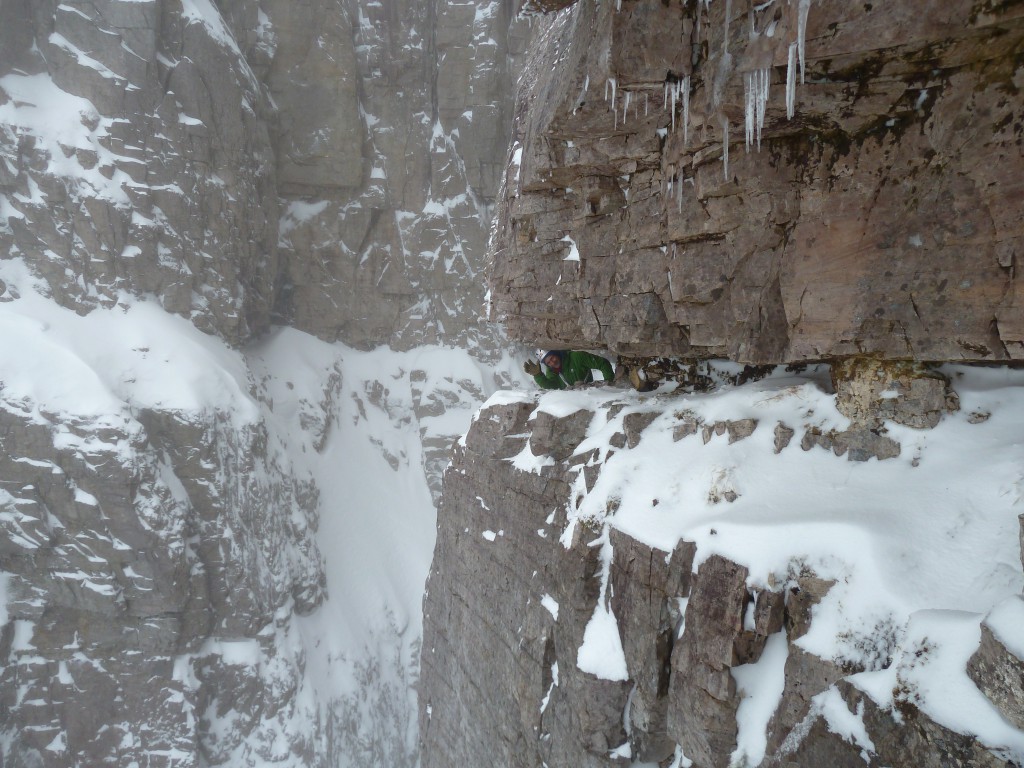 It became apparent that the horizontal chimney would only go in reverse, so I turned and went-at-it, feet first, under the watchful eye of Houseman who was picturing a Bullock roll, and plummet and splat. The fairy seeing this ridiculous spectacle cheered up a tad.
But eventually, with much grovelling and laughing and instruction of where to put my feet, I made it across the void to stand next to Houseman. All that remained was to fix the piece of rope and abseil into West Central Gully, down climb this, and climb up Fuselage Gully. 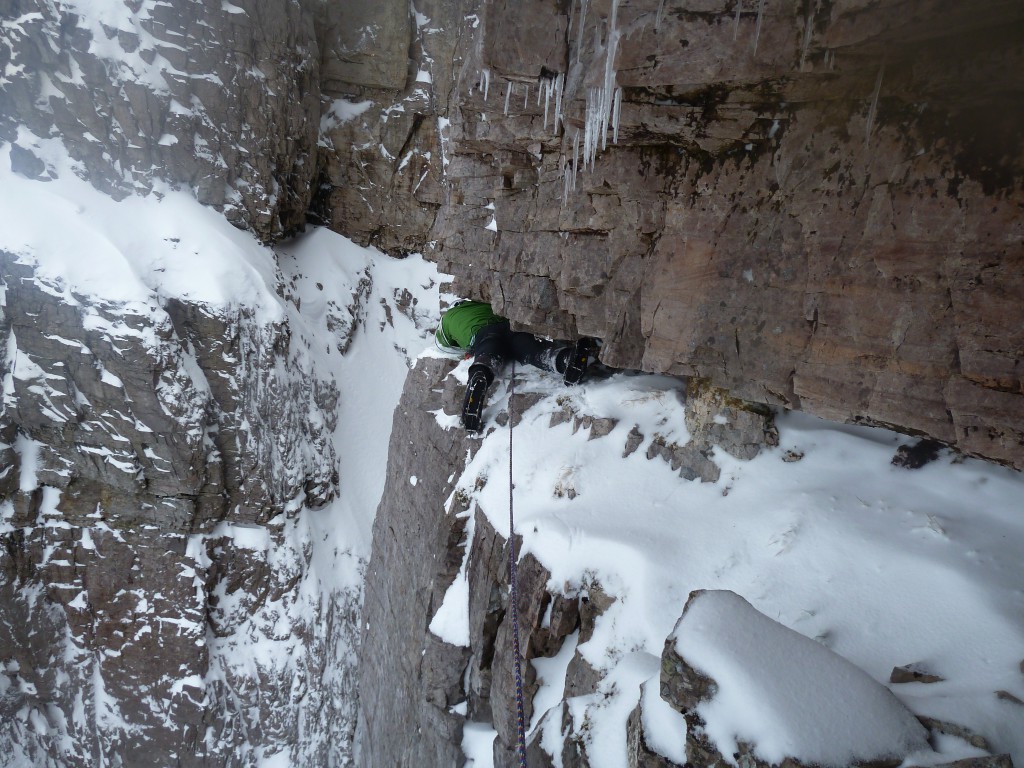 And the bad shit scenario fairy was no-where to be seen! 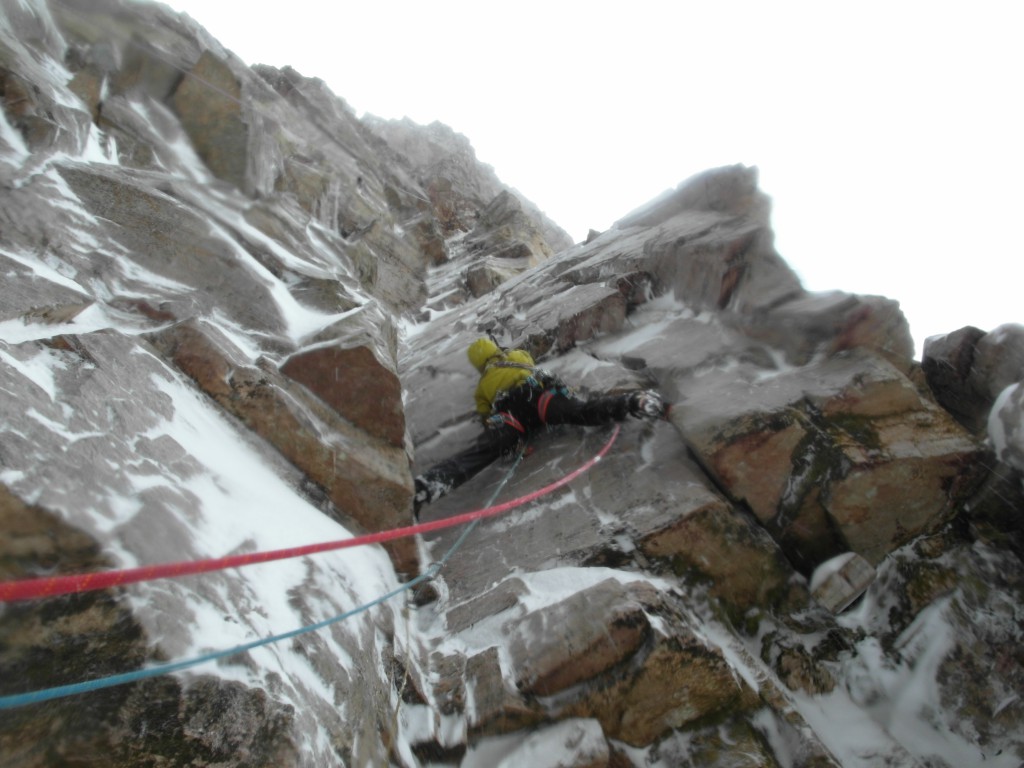 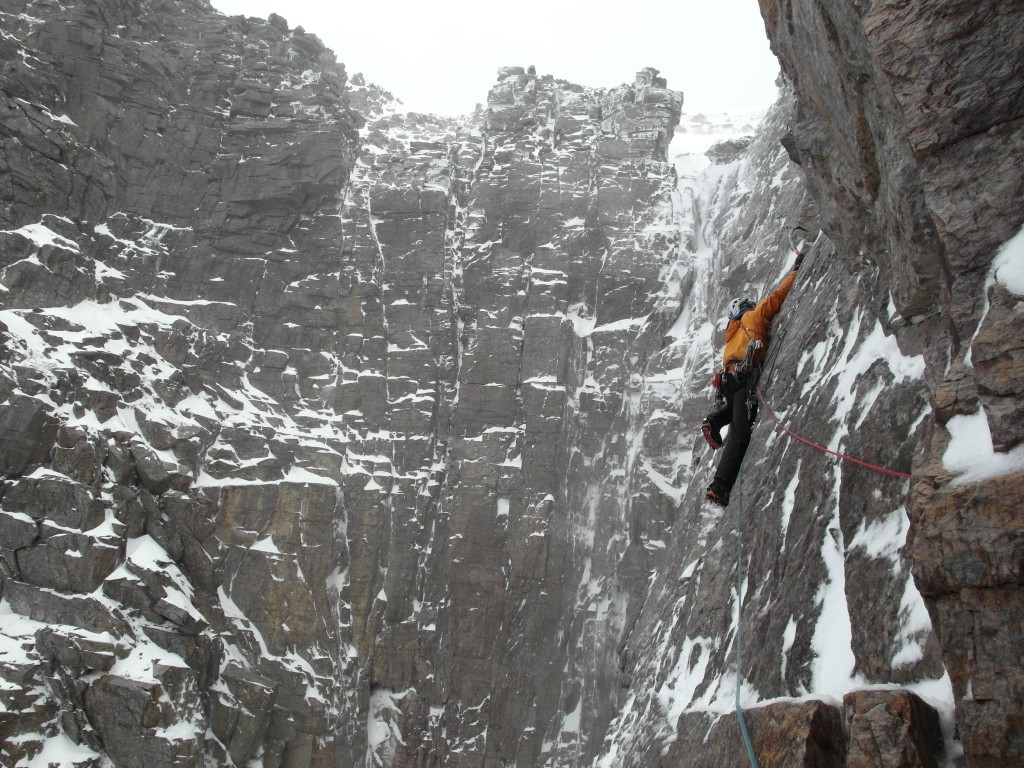 Leave a Reply to Will Sim Cancel reply