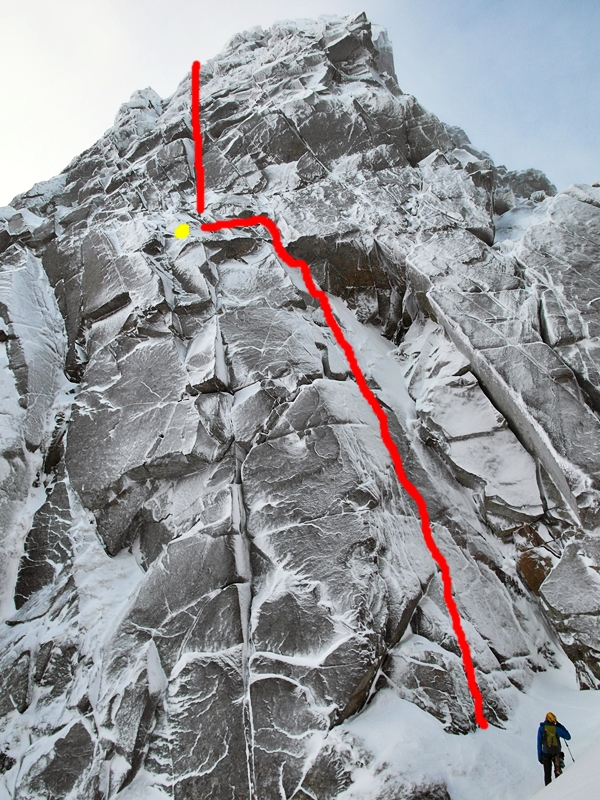 The drive from Roy Bridge to Lochnagar is becoming a regular occurrence. A slow twisting, mesmerising battle with fatigue and hare avoidance.

Arriving at the Glen Muick car park at seven pm, I shuffle, re-arrange, plug-in the stove, wrap my sleeping bag, settle down and wait. At some point the bundle of built up angry energy Guy Robertson will arrive.

Waking at four fifteen, breakfasting, coffee x 2, and walking, and walking. The col looking over the crag is never a disappointment, and now that the weekend is over the weather has once again turned drop dead gorgeous. Its mornings like this that make my frugal, roving existence worth more than any wage slip.

Three false starts, the clock ticks but eventually the Robbenator is cautiously creeping the technical groove of an E6 called Steep Frowning Glory on Black Spout Wall. He climbs beneath a huge roof which is passed on the left by using poor hooks and imaginary footholds and now he stands belaying on the sloping ledge at the top of the first pitch of the E3 Black Spout Wall. 40m, Technical 9. (The first two pitches of Steep Frowning Glories E6) 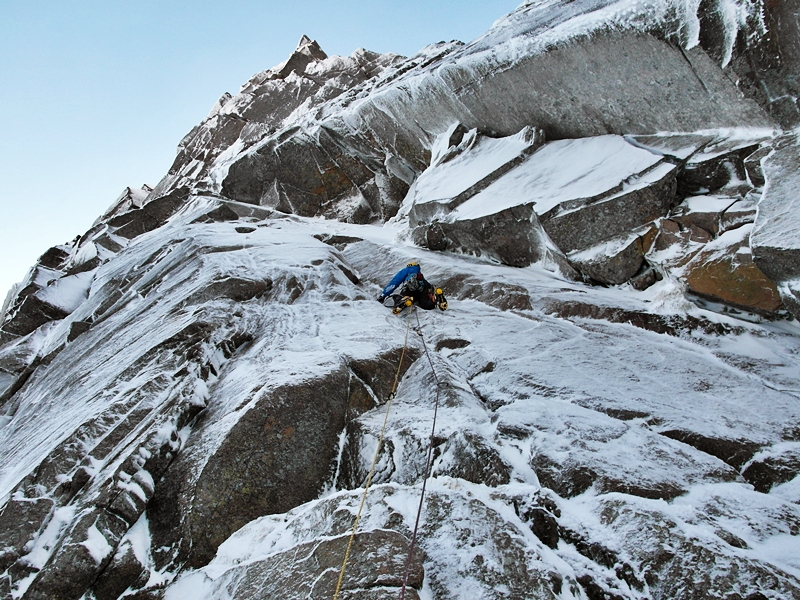 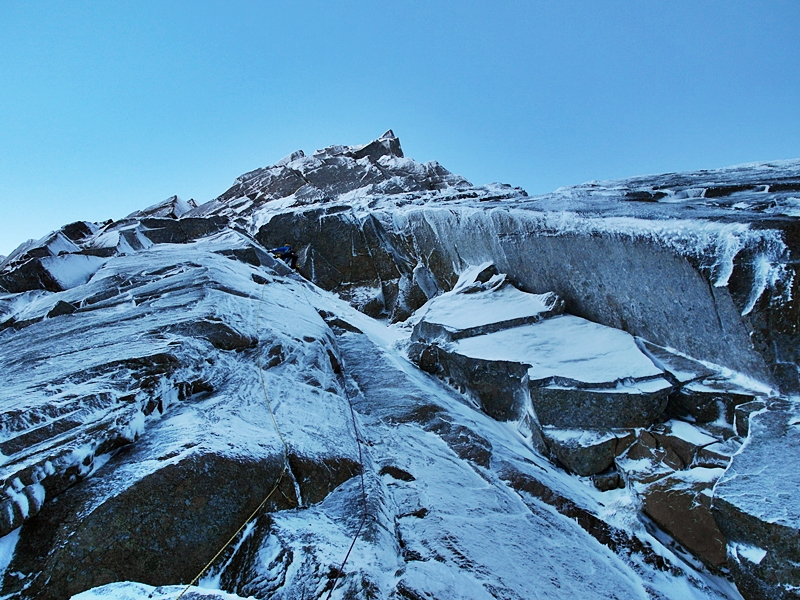 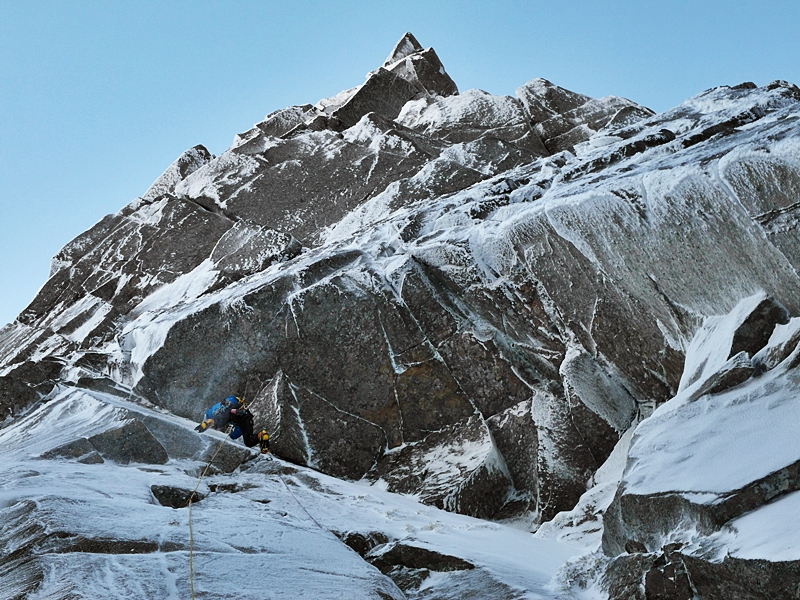 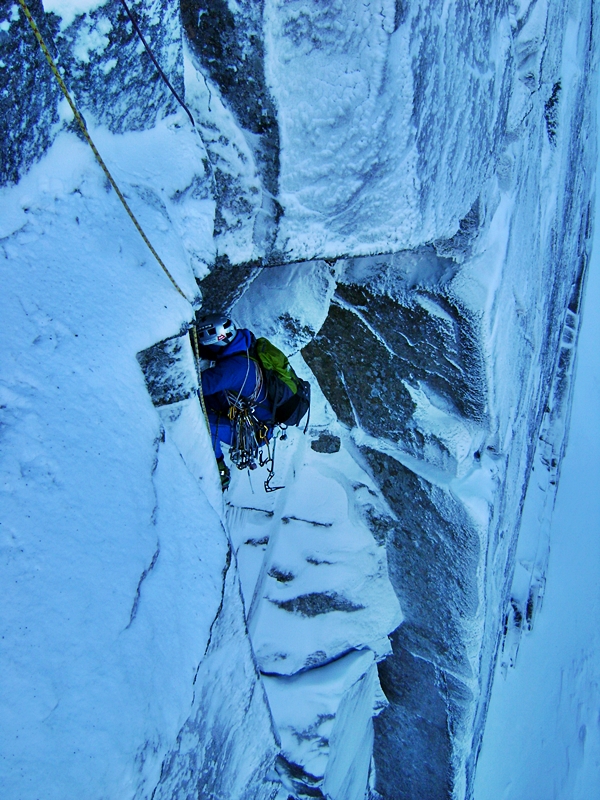 I start to climb, Robbo informs me that once I’m on my way it will be fine, but getting going is the second 5c pitch of Black Spout Wall and starting is bold, technical and scary. “Jesus, these sloping ledges give nothing.” Laybacking from a poor hook I reach… ‘Wonders’… a perfect pick slot and I’m away for a further twenty-five metres, burling on torques, passing roofs with imaginary feet. 30m, Technical 8. (The second pitch of Black Spout Wall. E3.) 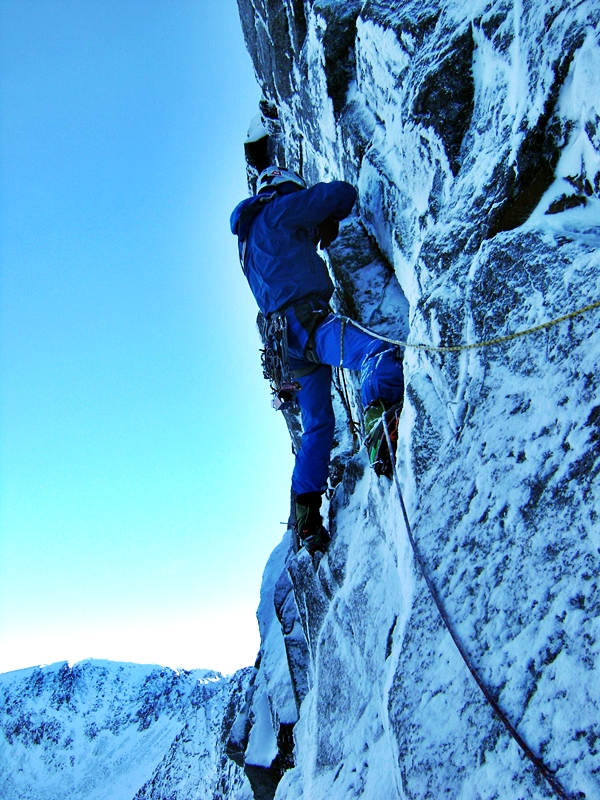 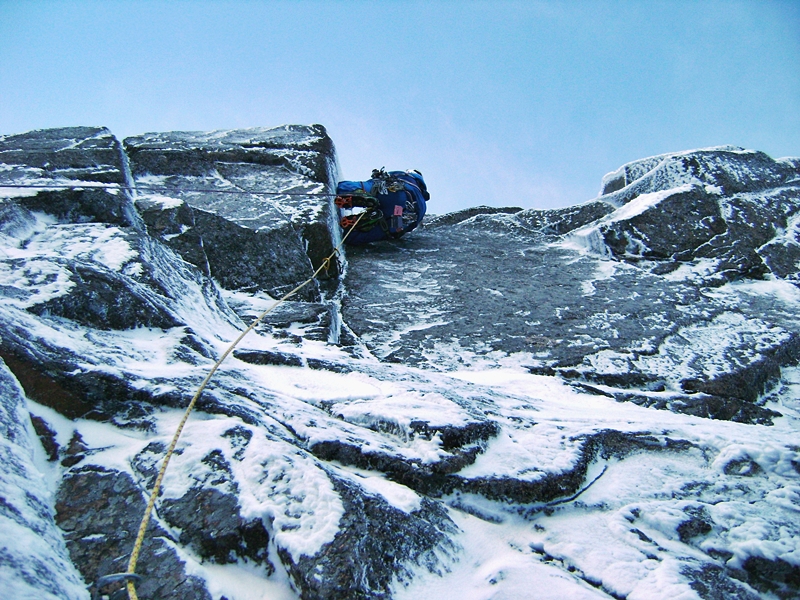 Robbo joins me in the red of another sunset on Lochnagar and climbs the summer Link pitch three to stand on a crest beneath a wall split by several off-width cracks. After spending over six hours on the first two pitches the movement is welcomed. 30m, Technical 7. (The third pitch of Summer Link.) 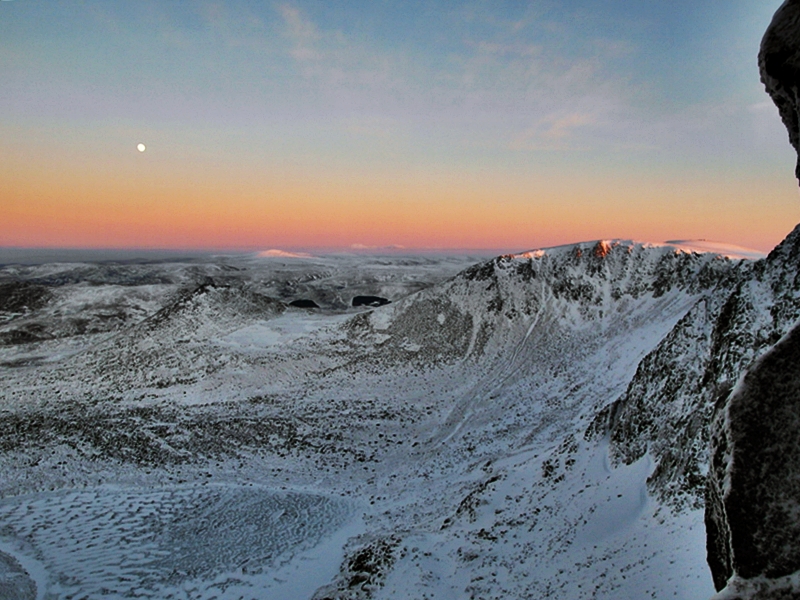 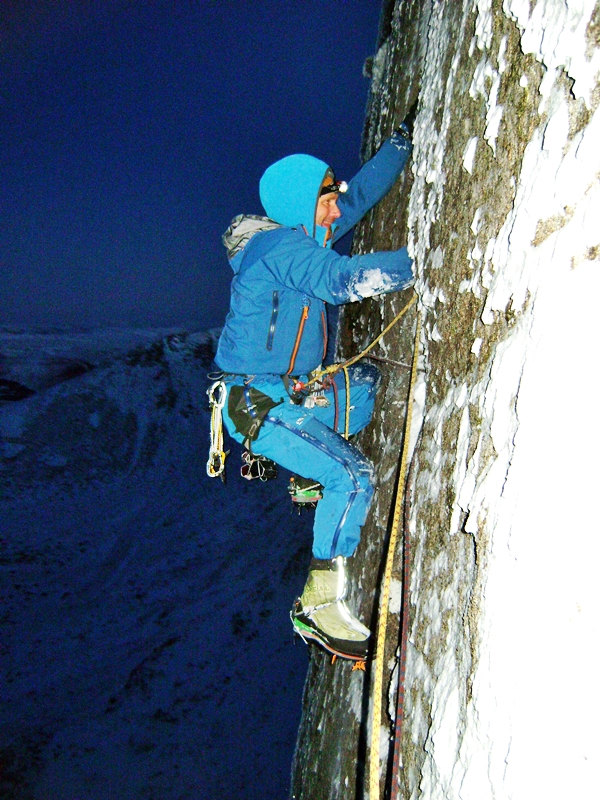 Overtaken by the dark I pull into a steep off-width on the left of the wall. My headtorch beam fails to illuminate any footholds, well apart from the leg gobbling crack. Having climbed the Link Direct a few days before I can tell this crack leads to just beneath the overhanging finish of that route, I refuse to be stopped now. Stuffing a leg into the off-width my left leg scrabbles and flags, shoulders burn and up is the way, failure is not allowed. Suddenly I recognise my position; I’m halfway up the final crux pitch of the Link Direct. I consider belaying knowing how steep the final three metres of climbing is, but I know Robbo will crucify me and call me a southern pansy. 30m Technical 8. (The Inhospitable Crack of Black Spout Wall and final few moves of The Link Direct overhang crux) 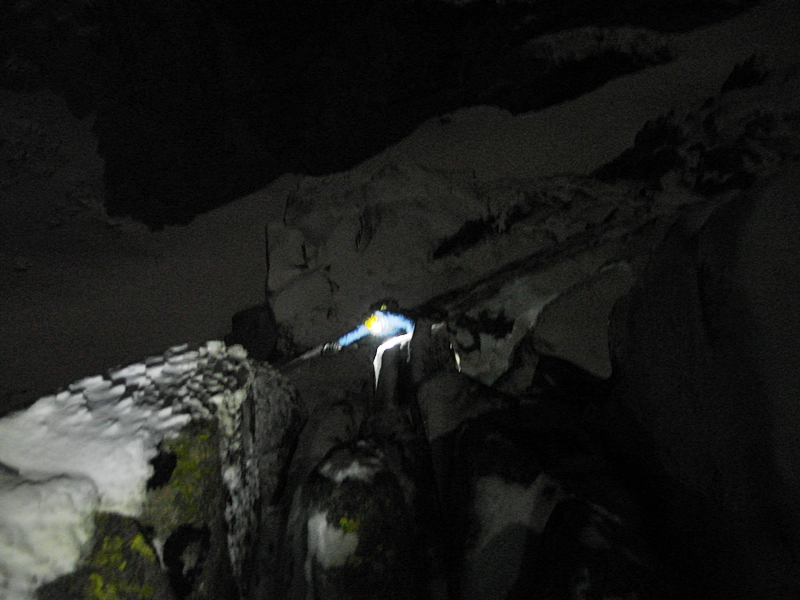 “It will go to the left.” I shout but I can hear the gnashing of teeth and the cursing of my southern weakness, “The left, the left, traverse off the line, raaaa, never!” Robbo pulls onto the crest of the Pinnacle and belays on the summit.  60m. 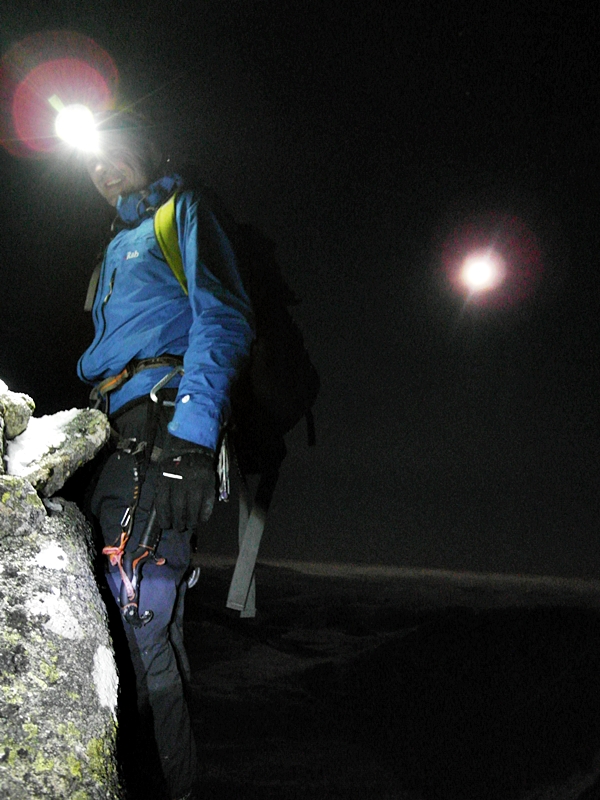 Reaching my van at ten-twenty pm, I shake hands with the bundle of fury which now appears to be pacified and begin the hare avoidance driving across the moon lit moors. Finally, twenty-two hours since waking, I lie in my van outside the hut and wrap my sleeping bag around me. The moon shines just the same in Roy Bridge as it does on Lochnagar which is bright and full but the memories I have in my head shine even brighter.

Winter Black Spout Wall. IX/9. 170m. 6/2/12. Robertson/Bullock. (Not enough stars in the system to start to think about attaching to this adventure.)