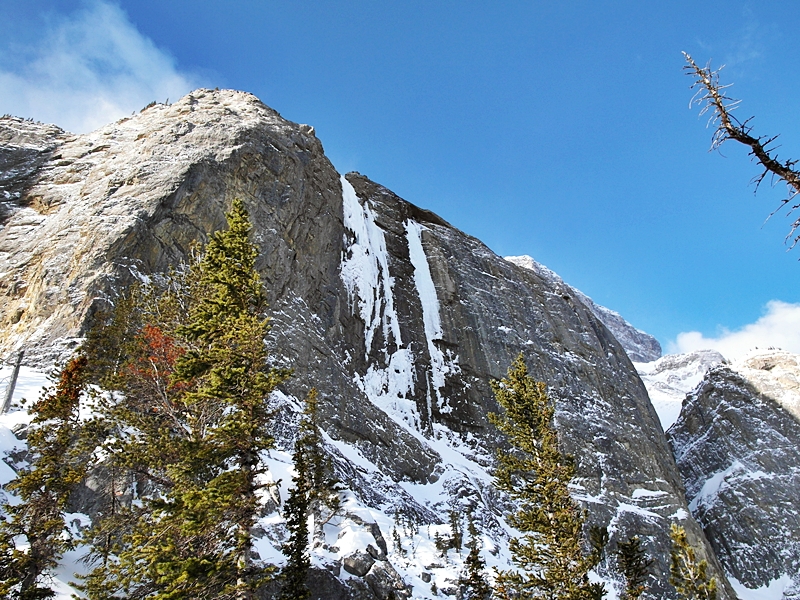 [‘Zugzwang (German for “compulsion to move”, pronounced [ˈtsuːktsvaŋ]) is a term usually used in chess which also applies to various other games. The term finds its formal definition in combinatorial game theory, and it describes a situation where one player is put at a disadvantage because he has to make a move when he would prefer to pass and make no move.’]

On my second visit to Canada in March 2004 the call of Mount Rundle and the fabled Sea of Vapours was strong but The Sea was not formed that year and had seen only one ascent by visiting Japanese climbers. Not to be deterred Dave Hunter and I on-sighted the walk in, not as easy as you may think, and in snow and wind and with wild wailing voices running through my mind we threw caution to the cold and strapped it on. The start to The Sea wasn’t in, Postscriptum – the other way to the Sea – also wasn’t in … so I dry tooled the start and eventually, one false start later, and one big fall later I reached a thin skin and tapped my way to the Whipper Traverse where Hunter took us to the thick ice and success.

The memory of The Trophy Wall, a name given by climbers because every route on this wall is something to be treasured, remained engrained in my memory. In the quiet times I could still hear the forlorn horn of the freight train passing through the centre of Banff and in the very quiet times I listened to the squeak of branches rubbing together, I could smell the sap of Canadian pine.

It took Hunter and I eighteen hours, car to car to climb The Sea, and I remember the experience like it was yesterday. 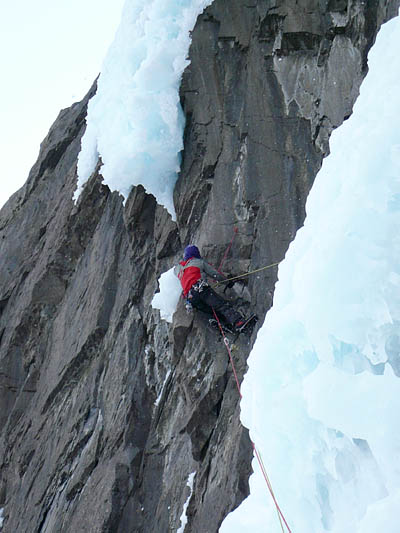 In April 2008 I returned to The Trophy Wall with Ian Parnell and once again the climb we chose was in bad condition. The Terminator, a thick ice pillar cut short where it had broken was climbed too by dry tooling. This start is recognised and called T-2, but the ice in April was even higher, more out-of-reach than normal. I torqued axe picks to reach The Blob and after placing two screws into The Blob, mantled, stood and contemplated. A thick ice roof above was two or three body lengths away and all I could see in front of my face was smooth rock. Teetering, gentle, gentle – I caught sight of the only protection, the screws into The Blob, but kept climbing until a crack, some gear, sanity. At full stretch hooking a hole in the ice, my legs pushed out to the side level with my head, then cutting loose, I performed the only one arm pull up I have ever managed before swinging the other axe, planting it deep, and pulling-up toward safety and success.

Yesterday Rob and I climbed what is for me the final of the big classic three ice lines of Rundle and the Trophy Wall, The Replicant. This is one route I was coming to Canada to climb but much the same as my other two climbs on The Trophy Wall it didn’t come without preperation and effort.

On the second day in Canada Rob and I burbled down the wide Potomac scar of the Trans Canadian Highway and looked up to see The Trophy Wall in the distance. Like massive white icy slug trails the climbs drooled the steep cliff and beckoned. “Game on.”

Returning to the Canadian Alpine Clubhouse in Canmore once again the talk was of poor conditions, ‘The ice is too thin, it won’t happen,’ but I stopped a long time ago listening to the majority of people who have opinions about conditions without any personal evidence. Climbing is full of this type of speculation, especially on the internet and I have always found I prefer to look and try for myself, go have a go, give something a pop and then if it doesn’t work out at least I know for myself.

In our favour, locals Raphael Slawinski, Jen Olson and Sean Isaac all said it was worth a punt and given the really serious avalanche conditions the approach would be threatened but justifiable.

Day three in the country and the call of The Wall was strong. Rob and I walked in half way to familiarise myself again with the thrash through the trees and to see what the snow was like but it then decided to snow and snow and snow some more. The Wall was put on hold.

A week and a half later with a better forecast once again Rob and I walked in, but this time inspired by reading an article in the Canadian Alpine Journal about the first ascent of Tangle Ridge which the climbers prepared their approach by shovelling a trench we took shovels. 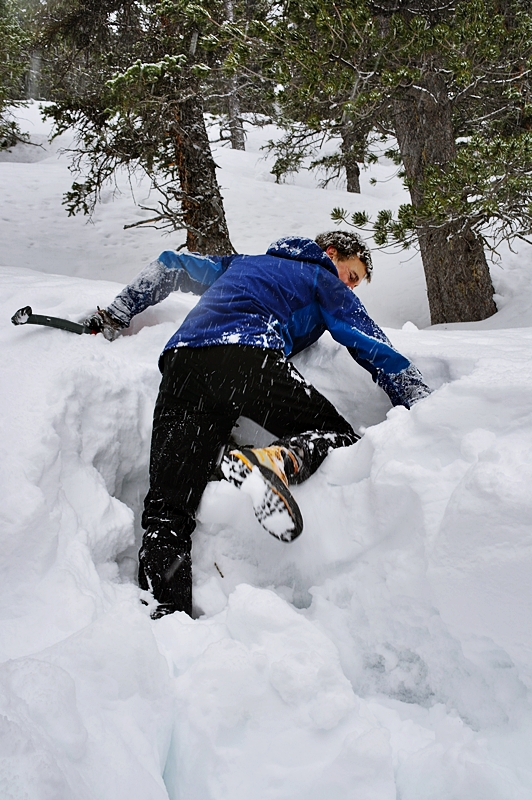 Rob, loud young enthusiastic youth, aka, Chopper Greenwood, really found his true way this day and has now gained the name of Bobby Snowplough Greenwood. He stomped, and dug and tramped and thrashed and burrowed and dug and swam and crawled and dug and dug and eventually with much encouragement from me – following in the tunnel a strategic distance behind – we stood on a spur overlooking one of the danger zones, a snow field in the lee of The Wall heavily loaded with fresh windblown snow. Why did Bobby have to draw my attention to that picture of the whole of the forest to our left covered with an avalanche. I stood and looked and in my mind’s eye I could see the plumes of powder blasting trees and rock, billowing and roaring and destroying. “Yes, its fine Rob, go on, go have a look.” I stood and from behind a boulder watched as The Snowplough trundled into action sinking deep into slab. “Wow, there is a really nasty layer here.” “Yeah, I’m sure… keep going, see what happens.” I crossed my fingers and began whistling Adele, or something else to suit the situation of possible loss as The Wall above our present position called. 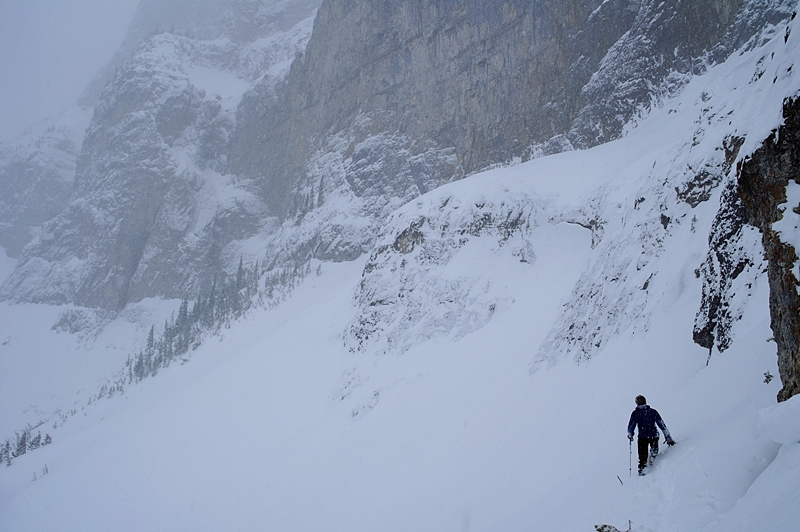 Bobby Snowplough continued to cut a trough and eventually stood in safety beneath the gully we had to climb to reach the higher snow-field. I minced across the slope to meet Bobby expecting the whole slope to sheer but it didn’t, then I climbed half way up the linking gully but could go no farther without an axe and crampons. “Right then, this is as far as we go today.” But the feeling of not quite doing enough to give us the satisfaction that we knew we would get in tomorrow for certain was strong. Trudging the two hour descent we both continued to cut and deepen the furrow in a hope the snow forecast for overnight would leave us something to follow in the dark pre-dawn hours.

Several hours later, early the following day, I stood on a crest looking at the blue sky and some of the most amazing ice streaks in the world and I knew if you really do want something bad enough and are prepared to work hard enough you will get it most of the time 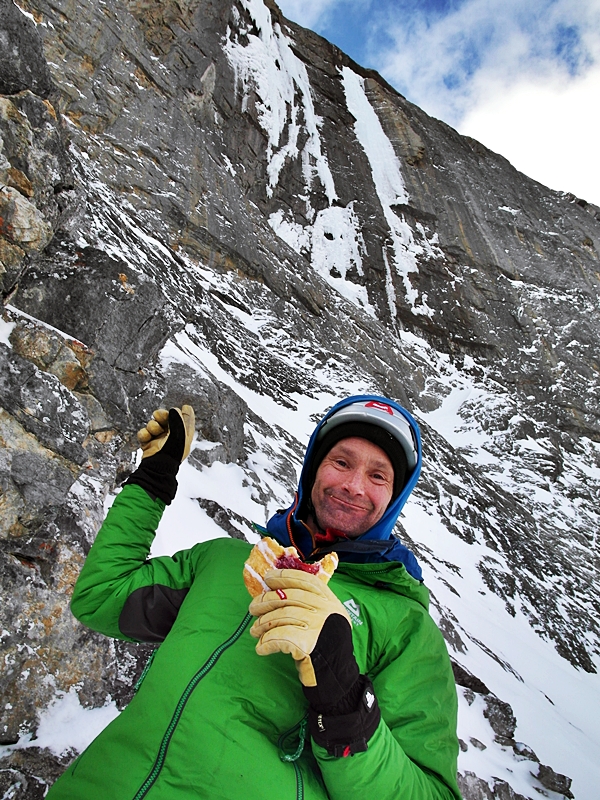 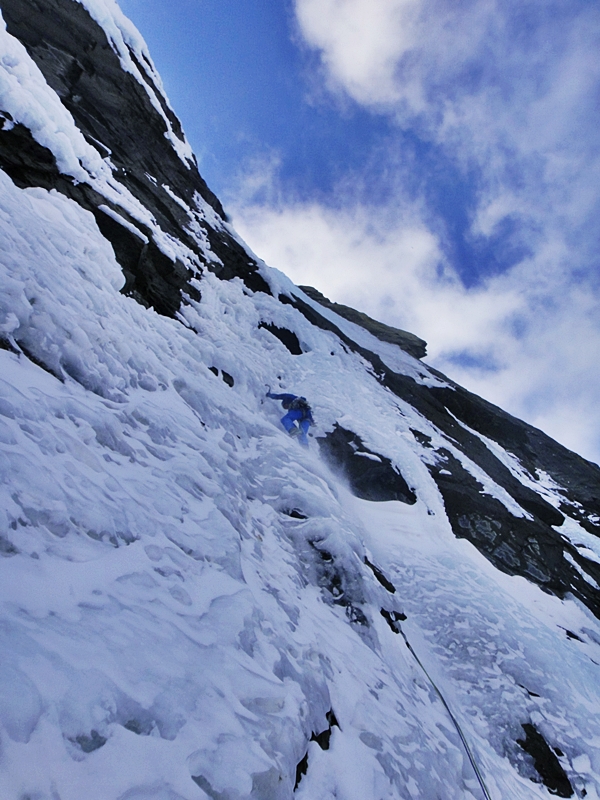 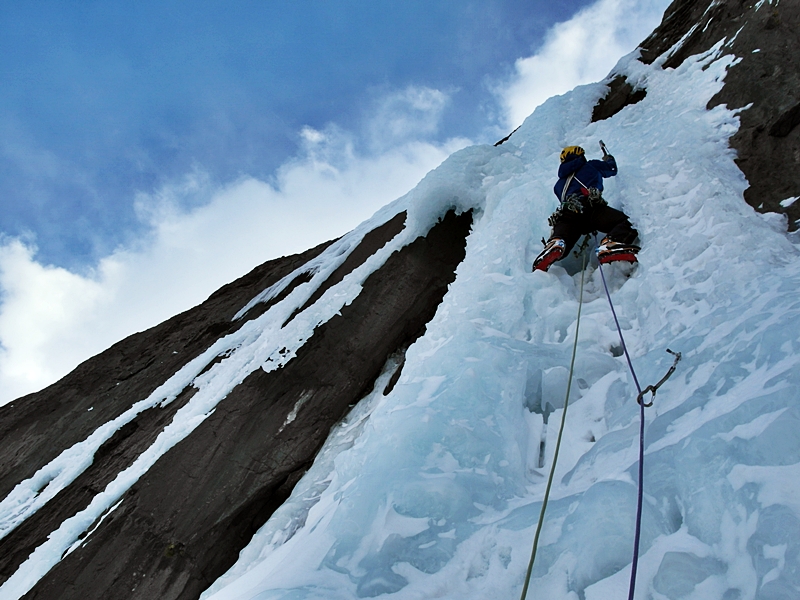 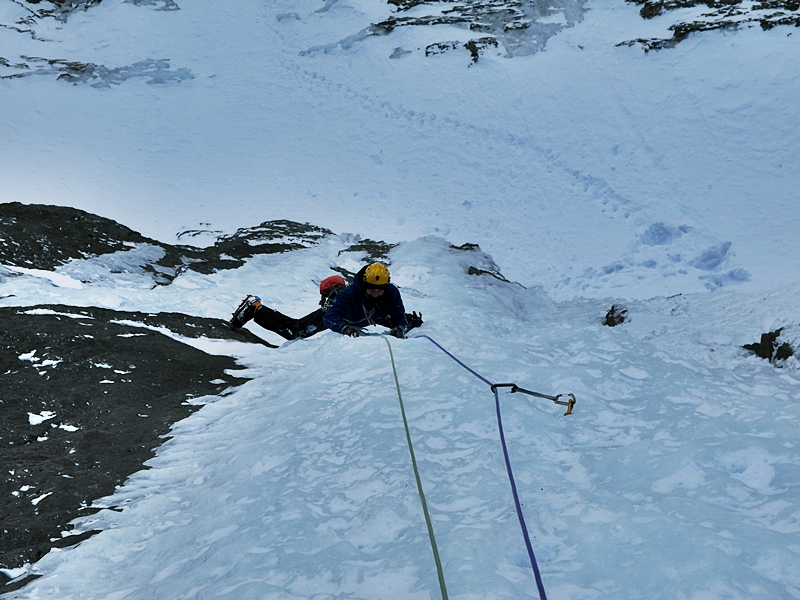 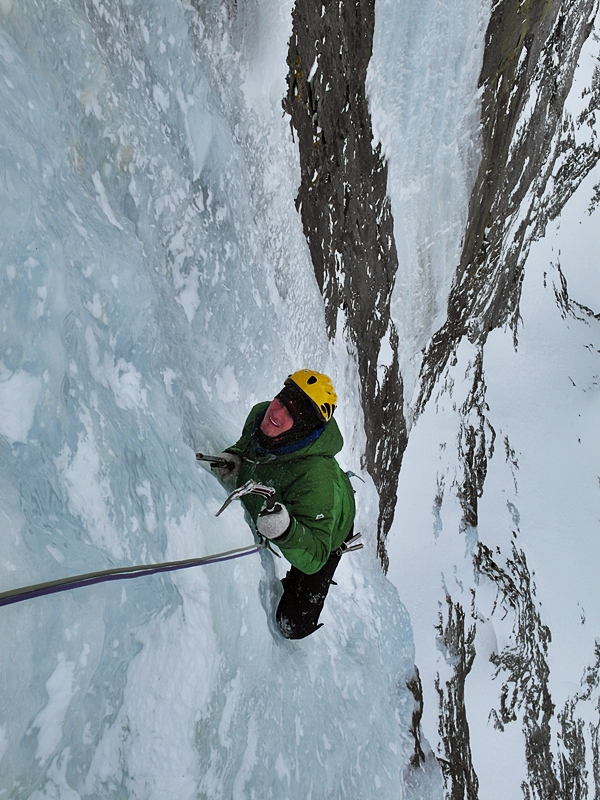 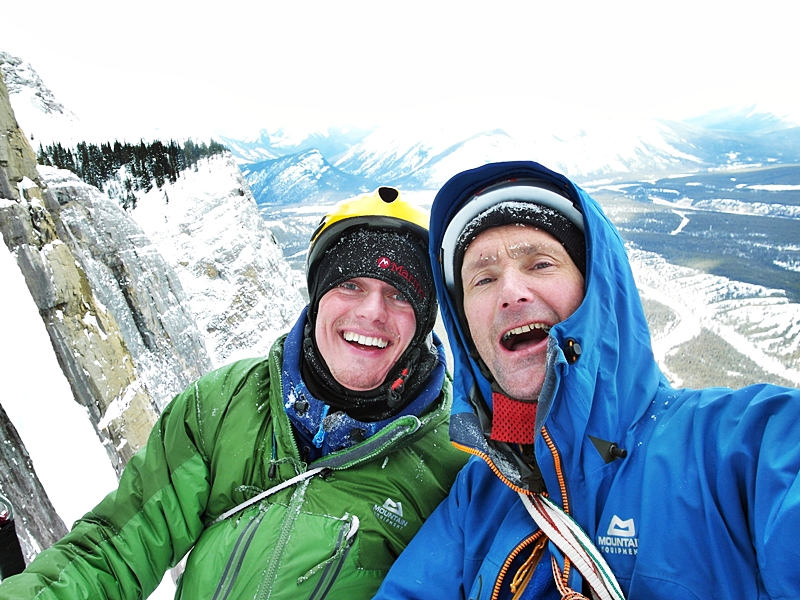