Conquering by Scaling the Biggest, Baddest, Hardest, for the First Time Today by the Youngest, Oldest, Bestest! 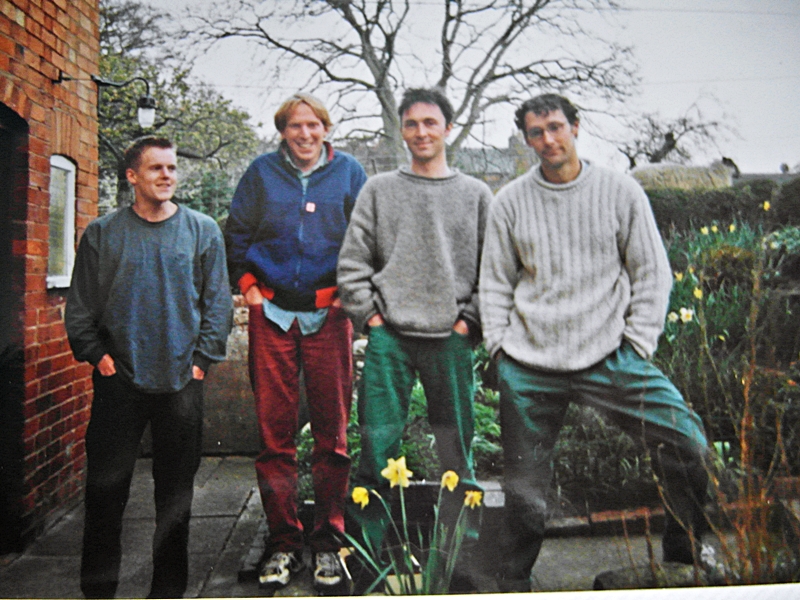 Four of the world's leading, conquering, best, scaling, youngest, big-wool-jumpered, coloured-jean-wearing, expedition climbers who teetered on that untrodden piece of garden path on the pecipice of the most difficult to reach back yard in Leicestershire EVER, for the first time today!! (And without oxygen or fixed rope). L-R Jules Cartwright, Jamie Fisher, Owain Jones, Nick Bullock.

I’m pretty laid back. Well at least that’s what I think. I wasn’t so laid back when I worked for Her Majesties Hotels, but now I’m certainly one happy go lucky.

“Who’s that really laid back guy?” I hear people say as I walk past, “Oh that’s laid back Nick.”

But, (you all knew there was going to be a but) while perusing Facebook, a social medium that I try to avoid as much as possible as it’s all-seeing, big-brother-feel concerns me, I noticed a story posted by John Roberts with a link for a climbing photography article on The Daily Mail website.

I clicked onto the article which featured Alex Messenger’s photography, nothing to get worked-up about as Alex takes some dandy shots, but the title of the article, Hard rock life: Eye-watering photographs capture intrepid climbers in action as they conquer world’s most challenging summits, had me choking on my bran flakes.

Now I know that the Daily Mail, the paper and web version, isn’t renowned for its literacy and substance or even the truth of its reports but I can’t believe that Rebecca Seales, the reporter who penned this title, who is, I would guess, a well-educated person, would and could write something so hyped and untrue and with so many clichés. What was going through her mind when she signed off on this piece of writing? Well I can tell you what it wasn’t – it wasn’t, ‘and there is another great piece of well investigated intelligent journalism’ that’s for certain.

I just can’t believe she wanted to write this, it must have been the payment she received – that will have run into the hundreds of thousands – it must have been this much to justify her putting her name on it. I’m a no-body writer but all of the money in the world wouldn’t have persuaded me to put my name next to this unintelligent uninformed, hyped, clichéd piece of dross.

For those who have not seen Alex’s wonderful pictures and read the article, after reading the title you possibly imagine the pictures are of climbers on Meru’s Sharks Fin, or Cerro Torre, or something on Baffin Island, but no, would you credit, I’ve actually conquered two of the world’s most challenging summits which are Clogwyn du’r Arrdu in North Wales and The Upper Tier of The Roaches in The Peak District. In fact I’ve conquered both repeatedly – get me!

On another matter I really, really hate the word conquer when it is associated with climbing, its appeasing to the masses, its hype, it’s untrue, its lazy writing. As climbers we never conquer, how the hell is a massive mountain conquered by a little person? Mountains are inanimate, they present a challenge for the individual certainly, but the mountains are not a challenge that is ever subdued, or won-over, or beaten to the ground, or slain on the battle-field or dominated. Conquer is a word mainly used when writing or talking about battles and killing and domineering, so I ask the unimaginative to stop using this word in connection with a pursuit and lifestyle that has nothing to do with war and battle and domineering and come up with something new.

Well – get me again – because when the shot was taken of Nico Favresse ‘scaling’ (I also hate this word when it is used to describe climbing, yes its factually correct, but it’s used so often by the lazy it has become a hyped cliché) The Axe, I was the person stood out of picture belaying him and unless I’m mistaken (which I’m not) we didn’t move together when the rope ran-out and Nico didn’t take a hanging belay half way up the climb which suggests that in the picture – as my ropes were both 60 metres long – Nico is not 100 metres up. In fact the total length of the climb is only 50 metres, a fact any writer (but obviously not Rebecca Seales) could find out in a second on the internet and Nico still wouldnt be 100 metres up in that picture if you stood one Axe on top of another!

‘The summit was given its name due to the blade-like appearance of the rock face.’ It’s not a bloody summit!

Elsewhere, Brit Jordan Buys, 31, from Burnley, Lancs, can be seen clinging onto the underside of a stone face in the Peak District, Staffs. The climb is one of the most difficult in the world and competitors come from all over the world to test their skills.

No they don’t, climbers, not competitors, as we don’t have competitors in traditional climbing, come from all over the world to experience the unique atmosphere and climbing movement of Peak Gritstone. Much respect to Jordan Buys for climbing Paralogism an E7 6C, but E7 6c certainly isn’t one of the most difficult climbs in the world by a long stretch of the imagination which i’m sure Jordan will agree having climbed much harder. Yet again more poorly researched hype for the masses to devour and make judgement. I suppose in the end if you are an unscrupulous, unimaginative, ignorant writer who writes for an audience who are also ignorant and who can’t see beyond hype, glorification and untruths, why should it matter that your writing is utter codswallop as long as it pays the bills?

Speaking to Lukasz Warzecha, a professional photographer who has recently had images in the non-climbing media, he says it is up to the photographers to try and educate the reporters so a more balanced and factual report is published but more often than not the reporters will write what they want.

I know we all have to live and feed ourselves and by Christ, doing that in Britain at the moment isn’t easy, but I would say it is for everyone involved in climbing – writers, photographers, climbers, people in the industry – to take note of this hype and distortion of our beloved activity, our chosen lifestyle – don’t sit back and laugh when Ernie, “Yes and if these idiots fall it costs millions to rescue them and us tax payers can foot the bills. Make them pay everything themselves if anything happens, they won’t be climbing around much then.” writes his ignorant diatribe. We need to stand up for climbers and climbing and tell Ernie how it is because when more and more of these factually incorrect pieces are published and the backlash from the uninformed masses is acted on by the politicians so they can win their next election, we climbers are going to lose out big time.

Maybe, dare I say it, if we really care about our lifestyle and beloved activity it is time for everyone – the climbers, photographers, film makers – to begin insisting on proof reading and editing what is being published in their/our name and if it is full of hyped clichés that damage the reputation and credibility of climbing and climbers we should refuse to work with such people no matter the individual loss of wage or support for that next big trip?

9 Responses to Conquering by Scaling the Biggest, Baddest, Hardest, for the First Time Today by the Youngest, Oldest, Bestest!