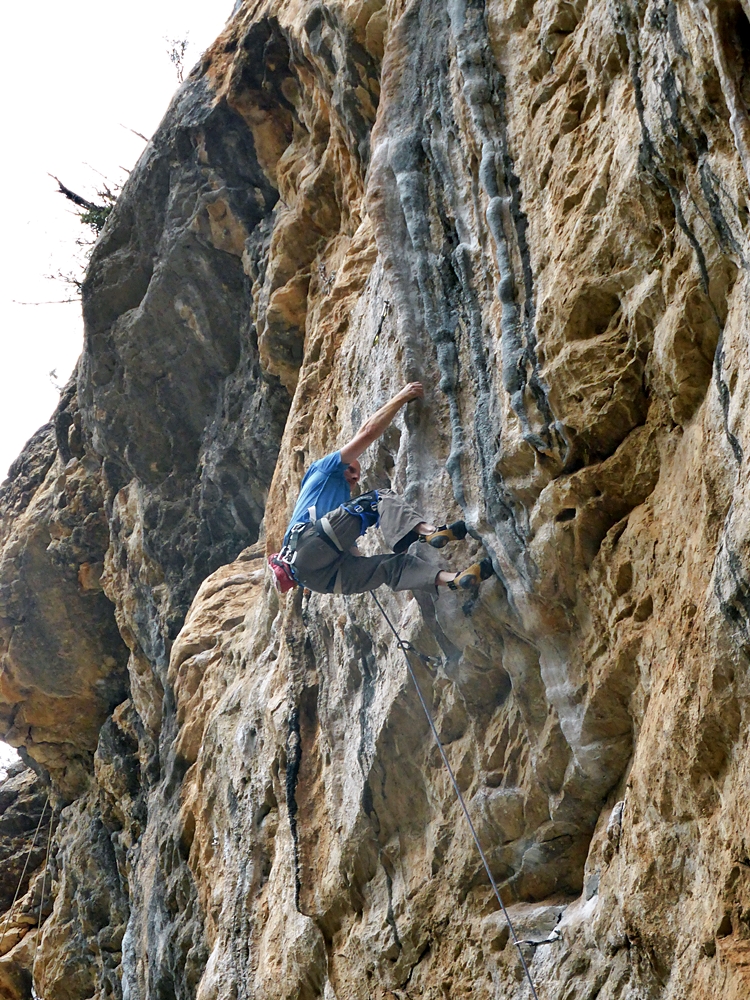 Matt Pascoe, an Australian with a particular penchant for going up at break neck (which he was very good at)… or, on a rare occasion, ejecting big time but always while wearing a smile.

The hues were golden and to the worn fingertips, the orange rock was cool. White chalk dots traced winding trails. Weeping tufas glistened in the early morning sun. The dust beneath the overhanging cliff was crushed bone and the vista, while standing and looking-out from a million year old platform of dead creatures, was autumnal – trees shone a traffic light radiance.

The climbing on, Les Bruixes, Terradets is possibly some of the most suited to my style, its physical and sustained and generally there are big holds and rests via knee bars. The climbing made me happy. On many of the climbs, the hardest move would often be at the half way point, but often there would be a sting, just one hard finale to keep you on your sticky rubber toes. Over the course of three weeks it became common to see people ejected from the very top of a climb. I let go from a few on-sight attempts while longingly looking at the chain and when this happened, I laughed and then celebrated in the effort and the battle and my exhaustion. Sometimes while being lowered I speculated if I could have tried harder, I analysed what I could have done different and how I could improve but as I hit the ground I was always smiling and enthusing… letting go meant I could do it all again.

Les Bruixes, in general, is high class and reasonably top-end and if you don’t climb 7c and above you will soon run out of objectives. Over a three week period I climbed routes graded from 7a+ to 8a and the feeling of being a climber, only of average ability, was strong. Regularly people were on-sighting 7c, 7c+ or 8a and 8a+ and 8b were grades of climbs successfully summited on, nearly, a daily basis . The crag was busy, especially at the weekend – Americans, Catalans, Canadians, Australians, Poles, Dutch, Brits, German; the craic was good, I don’t think I have ever experienced such a feeling of camaraderie and psyche for fellow climbers. I was inspired and heartened.

I’m embarrassed to say rock climbing for me was not always as enjoyable and relaxed and at times in the past I would have struggled with being average. Watching some of the people climbing on Les Bruixes, I could see a former self from about fifteen years ago, from a time when I mistakenly considered myself good because I had climbed E7 – from a time when I was not so happy in other aspects of my life and climbing, to counter the bad, was placed exceptionally high to make me feel better. This attitude was always going to lead to disappointment, because climbing, much the same as anything where so much weight is placed, will, at some point, kick you in the teeth. We are all just human and in the words of Sly Stallone, “gravity is a bitch”. In days long gone, I would quietly measure myself against others at the crag; I remember thinking, being a person who climbs harder routes would somehow improve standing, lead to popularity and acceptance, make me a better person. Failing on a climb in those days was very disappointing – I judged myself, my worthiness – I questioned if I had trained hard enough, everything was measured by how I had performed on a climb and if I was not performing to what I perceived was the best of my ability, I felt a failure. Fortunately I am reasonable strong upstairs and this feeling would not last long, I suppose deep-down, I knew that being a good climber does not mean you are a good person and I’d move on, try the next thing and celebrate in the successes. Placing so much pressure on myself, back in the day, so much pressure from something which should have been fun, made climbing at times more stressful than the stresses I was trying to escape.

Sport climbing must be one of the few activities where success and failure is so black and white – success is getting to the top without falling or hanging – failure is letting go and ejection. Sport climbing at a busy crag is spectator sport, it spotlights success, it highlights failure, that’s if you see falling as failure and not a journey, and if you push yourself and want to improve on previously climbed grades, you are going to fail and  fall and fail and fall and fail again and again but if you don’t like to fail or to be seen failing or if you judge yourself against your climbing ability, you are going to have a very mentally bruising time. Failure and accepting failure is part of pushing and learning and learning to fail with dignity and acceptance, while still in control to analyse and put into practice what you have gleened, I think, is a big part of succeeding and in the end this is what makes for a better person, accepting failure and falling with dignity and a laugh.

I vividly remember climbing in 2000 with Tom Briggs on a busy Blue Scar in Yorkshire. I had not long been back from Peru and my rock climbing standard was low from time spent in the hills. Tom floated up an E5 that I thought I would also like to lead but when I hit the crux, the wheels fell from my psyche-bike and I plummeted… and I plummeted repeatedly. Instead of gracefully accepting that personal climbing abilities go up and down and it doesn’t mean anything to anyone apart from yourself and instead of enjoying being out with a friend, I  became frustrated and shouted to Tom in a loud voice – loud enough so everyone could hear, how I had been to Peru and how weak I felt and how I would normally find the climb easy. In the end I gave up and was lowered and Tom re-climbed so I could second but not before he said, “Well Nick, you can be sure of one thing, everyone on the crag knows you have been to Peru and would normally easily climb E5.” I’m glad to say that it was going dark as Tom left the ground because the colour of my face resembled the setting sun.

Climbing at Les Bruixes over the last three weeks has been fascinating, watching people and the different way individuals accept failure, or don’t, and the reasons why, in some cases, that failure has resulted in screaming and tantrums, excuses, sulking and generally attempting to blame anything apart from the obvious. I’m happy to say from our group of six, the support and encouragement for each other was fantastic and healthy, there was not a single case of the dolly being thrown or performance anxiety, perceived greatness, envy or sulking and because of this healthy and supportive atmosphere everyone had a great time and a really fun trip. Climbing will bite back, no-matter who you are and accepting this, accepting that no matter who you think you are and how good you think you climb or should climb, you will never have continually improving days, it’s an impossible scenario and it’s a fact of life that some days, for whatever reason, will be better or worse than others.

I love climbing – I love rock climbing, ice climbing, the mountains, mixed, but it has taken a lot of self-analysis and getting my life to a reasonably happy, satisfied place and growing-up to get to this point – a point where I truly enjoy and have fun and if I fall and fail, generally I scream as I fly through the air and then as I am lowered, I laugh because its fun to try and everybody fails on occasion and no-one cares and you know what, the sooner we all learn to laugh, the sooner we will all be having fun and the sooner life will become better and when this happens the climbing will be what it should be, enjoyable.

To finish, although a very well used quote, so used it’s almost a cliché, but a quote well worth repeating and remembering is the one by Alex Lowe, “The best climber in the world is the one that has the most fun.”

5 Responses to After the Event.