The Sound of Bill Birkett’s Jaw Hitting the Table… 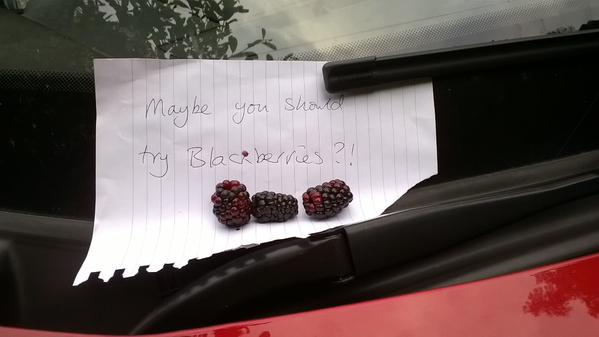 Annie Wilkes, aka, Rachael Crewesmith leaves a little note of encouragement on my van windscreen.

I sat in front of my laptop and booked a ferry for France. My finger hovered for a second before hitting the confirm payment. I felt the strength ooze from my forearms. That’s it, my Strawberry relationship is over. Move on, walk away, time for the mountains.

Later, sinking deep into the sofa, broiling in front of the fire at Ynys Ettws, the CC hut situated in the Llanberis Pass, my friends Mark and Nikki sat opposite planning their day for tomorrow. Also on the sofa was Rachael Crewesmith who was staying at the hut for a big chunk of the summer while cragging – well, that’s what she told people, but the main reason was to prepare for her mountain instructors award. I met Rachel for the first time three days earlier when she burst into the living room, a forceful bundle of, you will get to know me, energy. Rachel is one of those people you instantly take too – small in stature but big in character and presence – bubbly, a couple of bottles short of a six pack, self-assured, fun, confident – she made me laugh. She had bright eyes that said, ‘take me on if you dare’ and a big smile. She also appeared to have that enviable skill, one which has always eluded, the ability to introduce herself to strangers and continue the conversation like they had been friends for life. Don’t get the wrong idea, she wasn’t all fluffy – a hippy type who sees no wrong and loves everyone – there were certainly some who scuffed her skin, especially the type who felt the need to offer forceful advice for passing the MIA.

“Everyone wants to tell me what I should be doing.” I let her know she was in no fear of that from me.

Mark and Nikki decided they would be climbing at Tremadog the following day. My ears pricked. “Really.” After hours if subtle cajoling, well, no, in fact it was full on badgering, I convinced Mark he would love to stand on a ledge in the middle of the Vector Headwall and belay me on my millionth attempt at Strawberries. Mark is a Poet. This may conjure softly spoken bard, but in reality he is opinionated and tough. Scrape beneath that forty something leather-bound cover and there is also deeply sensitive (he is a poet after all) and as I sat bullying and cajoling, I could see the thought of holding the rope as I climbed to the edge of my ability, with big lob potential, was already causing him to fret. “But I’m not sure I can’t give a dynamic belay while attached to the rock.” “Yes you can.” I had turned into one of Rachael’s feared harbingers of forced information, but maybe I had been one all along! 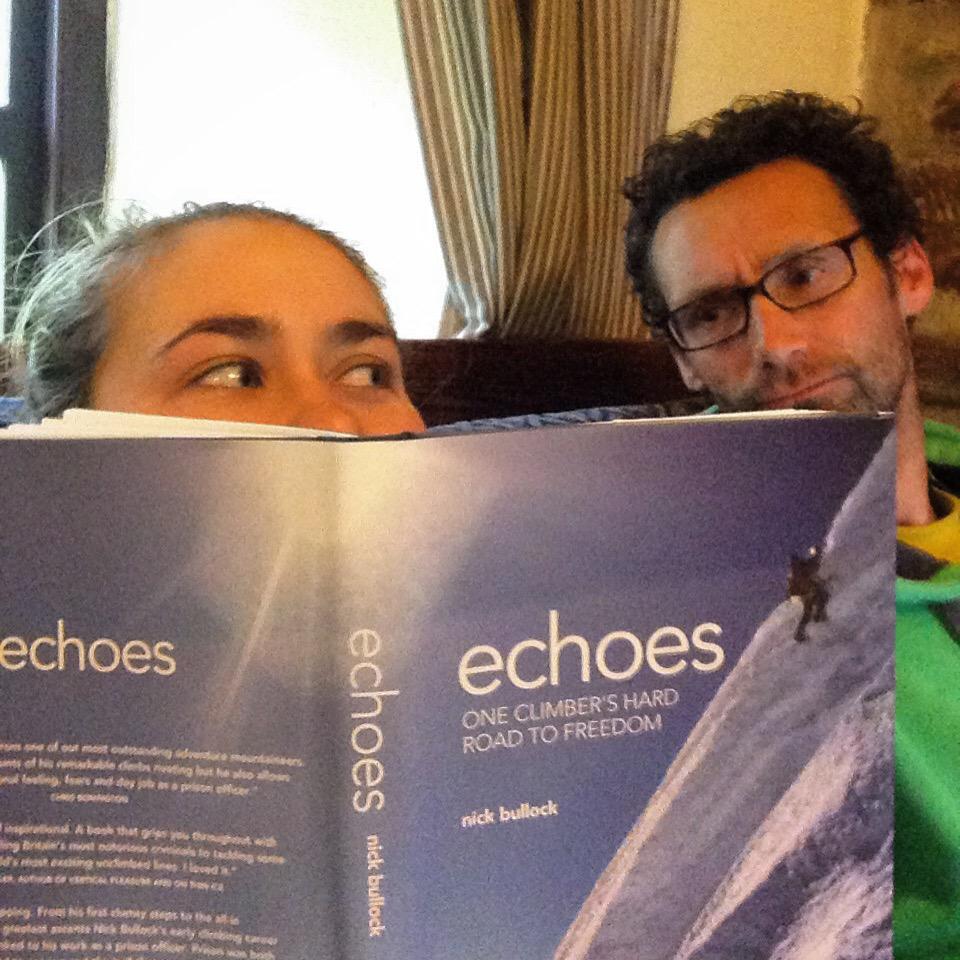 Rachael does a bloody good impression of Annie Wilkes from the film, Misery. If she starts to call me, “Dirty ole birdy and brings a sledgehammer to the hut.” I’m out of there.

Apart from being eccentric, well read, at times scary and most certainly barking, The Poet is also very cunning, think something along the lines of Jason Bourne meets Professor Brian Cox and within minutes of agreeing to belay, he turned to Rachael and suggested she join us, making a party of four, which would give her the opportunity to climb with Nikki on a VS or two in preparation for her award. Win, win…

Arriving at a sunny Tremadog the next day, The Poet pulled his masterstroke. “I’m going to climb a VS with Nikki first then I’ll belay you on Strawberries,” said in a Brian Cox voice with underlying Jason Bourne menace. This was fine; I’m not so selfish to insist he spend the whole day strapped to the Vector Headwall belaying me… (looks shifty), and without hesitation, I happily agreed to belay and follow Rachael on a VS called Clapton’s Crack (looks shifty all over again). Everyone appeared to find it amusing that I was about to second a VS, not me though, I had climbed quite a few Very Severes before and all had been with axes and crampons in the Scottish Highlands.

After slithering in mud and fighting the undergrowth we arrived beneath a fine looking corner. No, really, it was – it would have been brilliant to torque with picks and the walls either side had enough in the way of edges for front points.
Rachael geared up while I discovered I had forgotten my rock shoes. “Oh well, I’ll follow in trainers.” This garnered a stern, instructor-y kind of glair, “That’s very rude, we have been told never to climb in approach shoes because it demeans the client.” “But I am the client?”

Following Clapton’s Crack in trainers, I found the climbing style was quite similar to winter climbing, all thrutch and body parts, which gave pangs of winter longing. After fighting the cornice of ivy we returned to my van. Mark and Nikki had not returned from their climb (no doubt a planned scenario from the undercover professor of poetry), so, as I had enjoyed myself in my imagined VS winter wonderland, I suggested to Rachael she lead another climb. When she picked herself from the mud, she happily agreed and a climb called Shadrach was chosen. 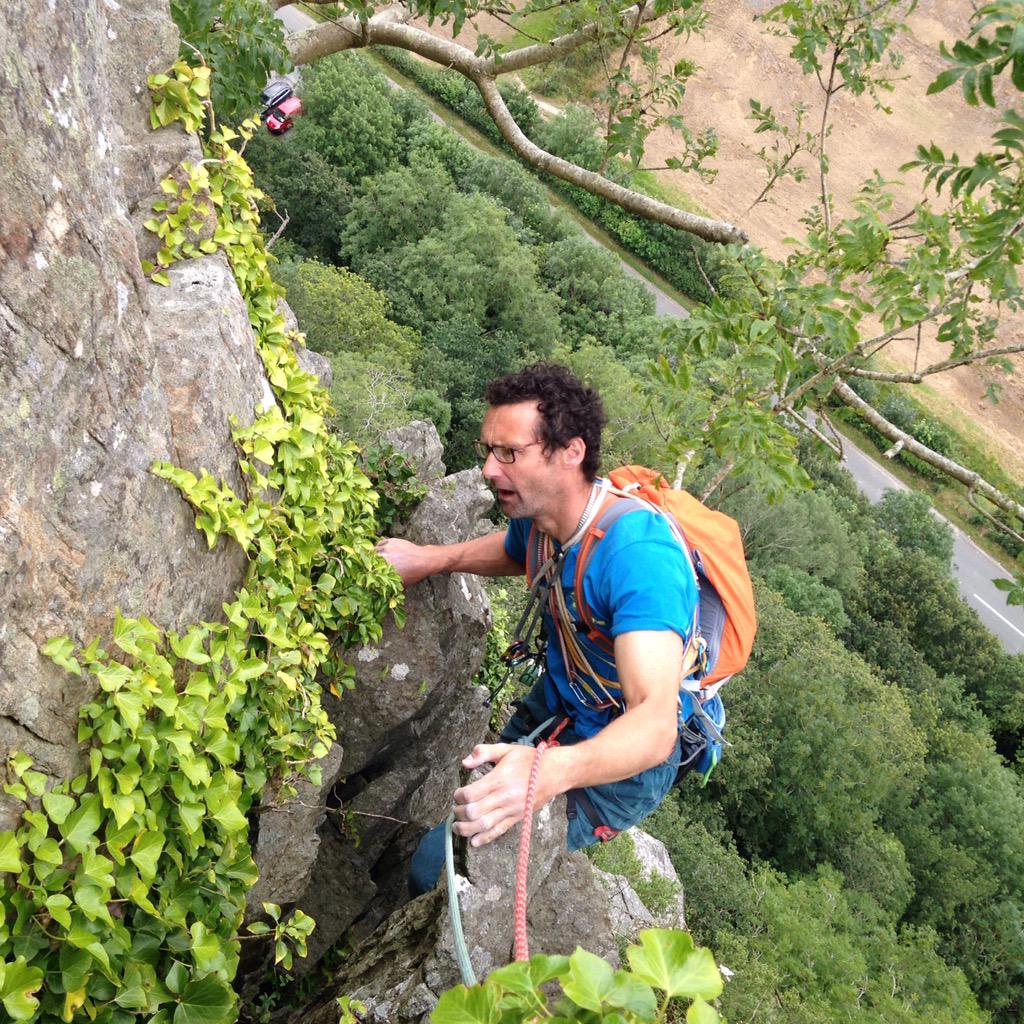 Shadrack was even more like a burly winter climb and even more fun than Clapton’s Crack and not to appear rude, I remembered my rock shoes this time but forgot to wear them.

Everyone returned to the van. Nikki, The Poet, Rachel and me, and within seconds the Poet, now in his Bourne the Bard role threw his literary poetic grenade, “It would be nice to do another climb with Nikki.” And Rachael, obviously an undercover, deep rooted mole in this conspiracy joined in, “Yes, you two should do another climb, I’ll belay Nick on Strawberries.”

On the surface, cool calm and collected, I agreed, but underneath my mind screamed, ‘MIA INSTUCTOR IN TRAINING, ONLY KNOWN EACH OTHER FOR THREE DAYS, NEVER CLIMBED TOGETHER UNTIL TODAY, WHAT A WANKER THE POET IS… CONSPIRACY, DEATH LOB SCENARIO, RON HILLS, RED SOCKS, BIG BEARD…’

The sun soaked the ledge above the Vector Headwall. The fields opposite, no longer resembled the Maasai Mara, they were boggy with furrows full of water, more paddy than Wildebeest. Rachael’s instructor experience came in handy. I tied-on and prepared to be lowered for a top-rope, warm-up, while feeding the rope the wrong way through the Gri Gri… “What do you mean I’m the hand?” Her paranoia, something I find in equal measure, be it instructor type or mountain guide, was already a bit too honed. “This block moves and the tree you have slung is a twig.” “Its fine, it’s well tested.”

The warm up went well; I managed to top-rope Strawberries in a single push and after sorting the gear for the belay, abseiled to the ledge beneath that other three star classic, Cream. Waiting to abseil, basking in the sun, Rachael practiced her dynamic belaying running back and forth on the dusty ledge above while rehearsing short roping scenarios and lapping the rope techniques. Her phone rang. “Hi Iain… Yes I found someone to climb with … no, just some bloke I met in the hut…. We are at Tremadog; yes I’ve led two climbs… I’m about to belay him… Oh, just something near Grim Wall.”

On lead – huffing and puffing, climbing at my limit – inches from the slim, but you’re never going to let go of rail at the end if the difficult climbing, I let go, and as I let go the image that ran through my mind was a person practicing dynamic belaying…

“BASTAAAAAAAAAAAAAAAAARD… “Rachael’s dynamic belay practice on top of the crag must have paid dividends; she was ripped from the stance and closely inspected the top pitch of Cream while always considerate, apologising to the climbers on Grim Wall Direct about the noise I was making.

Game over for another day, we all trooped back to Ynys Ettws.

The hut was warm. Fug swirled. Everyone sat in the living room. Around the large wooden table Rachel made new bezzy mates including Bill Birkett the Lakeland legend. Bill, gnarled and staid, was already hooked, he turned to Rachael, “Where did you go to today?”

“What did you climb?”

“Yes, I thought so and the top was very overgrown and had ants.” (Cheeky smile for effect)

“Did you climb anything else?”

“So was that it, did you climb anything else?”

“Ah, yes, well, randomly we finished the day with… (pause for effect), Strawberries.”

The room went silent; the only sound was the bump of Bill Birketts jaw hitting the table.

Here is a link to a film of that day on my attempt at Strawberries with Annie Wilkes belaying. Thanks to Nikki Clayton for the film, next time it would be great if you held the camera in the correct way 😉

Strawberries attempt by some old guy from the hut, belayed by Annie Wilkes