The view while walking from Racó de misa, Montsant.

I’m driving north from Catalunya, through the high pass of the Pyrenees, into France and on past a busy Bordeaux. Earlier that day Rich Kirby and I had climbed the last route of a six-week trip, El Zulú Demente, a 300m 7a+ at Riglos, and after a final brew together I had begun the long drive home. Eventually the thought of a shower pushes away all other thoughts and I stop in a motorway service station.

I’m walking from the service station feeling clean and refreshed, when a loud banging noise catches my attention. Across the garage forecourt, next to some fuel pumps, is a lorry with a cream coloured, double decker-double trailer. It’s dusk and the forecourt lights shine bright. Through slats in the side of both trailers I see large gleaming eyes. A car, headlights on, drives near the trailer, and as it passes the cows bump into each other, hooves skittering against the metal floor, some fall down and scrabble to stand. After a while they settle once again, before pushing their heads to the narrow gap. Brown eyes blink and look from their dark confined space onto an alien world. It made me think of images from the Holocaust.

I continue driving into the night with The Clash for company, but also with thoughts of what it would be like to be taken from a green field, to something completely beyond comprehension – the sound of speeding traffic, slamming doors, the clunking and whirring of petrol pumps, people. Headlights coming from the opposite direction remind me of the eyes looking from the trailer. 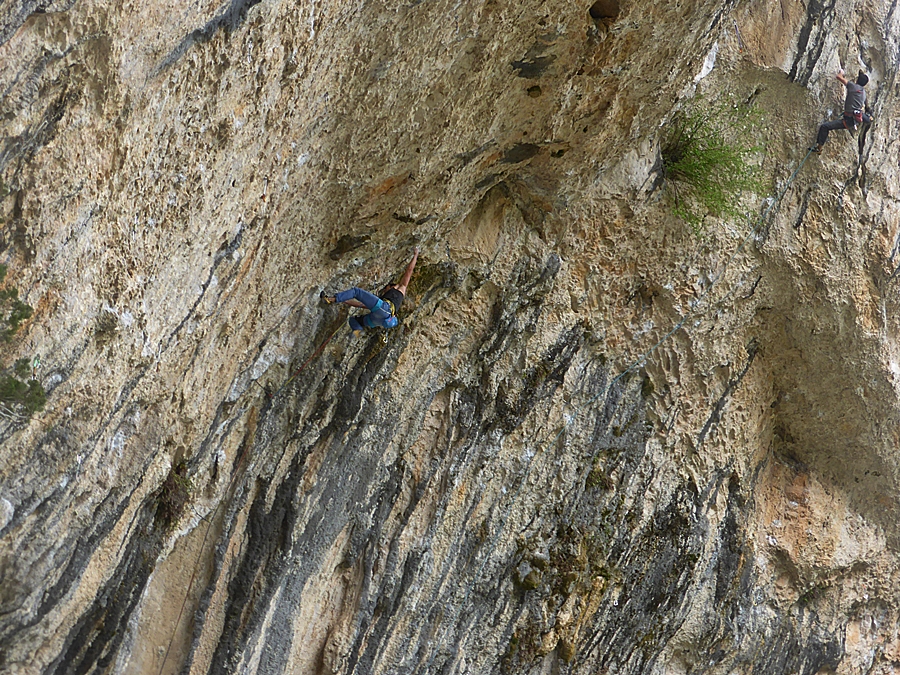 Unknown climber about to reach the cave on Coliseum, Rodellar.

In Rodella Rich’s eyes had been similar to the cows the day we first approached and worked Coliseum, although mine were more so as I climbed out of the cave, a third of the way up the climb, while putting the clips in and fathoming moves between falls. It had been a few years since I’d first stood under this route, a 40m 8a, all corners, tufas, three dimensional and the most continuously overhanging climb I had ever contemplated. The description on UKC claimed: ‘No move is more difficult than British 6a, but every move is 6a’. “What a load of rubbish.” I said to Rich later that first night as I swigged a Voll Damm beer. “I’m not sure.” Rich replied. I looked over to see what he was drinking; Voll Damm do a 9% and I suspected he had quaffed a six pack of them!

After two days on the climb and following a rest day, Rich climbed Coliseum clean. And I was the one needing 9% to numb my battered body. Everything ached: fingers, elbows, knees, thighs, toes, stomach, back, head. After four days on, the climb it was getting easier, but not that easy. I had reached the last difficult section without falling twice before falling twice. What a route. What great climbing. 6a every move? What a load of bollocks!

On my last attempt, before we left, I managed to get through the bit I had repeatedly fallen from – a corner of slopers and fins with poor feet. Shocked to have reached the other side, I dropped a knee and threw some fingers for the pocket that would surely mean success… The wall, all yellow and orange with black streaks, blurred, and my fingers bounced from the rock to the side of the pocket before I was ejected once again. Game over. I pulled back on and began the job of getting my clips out. 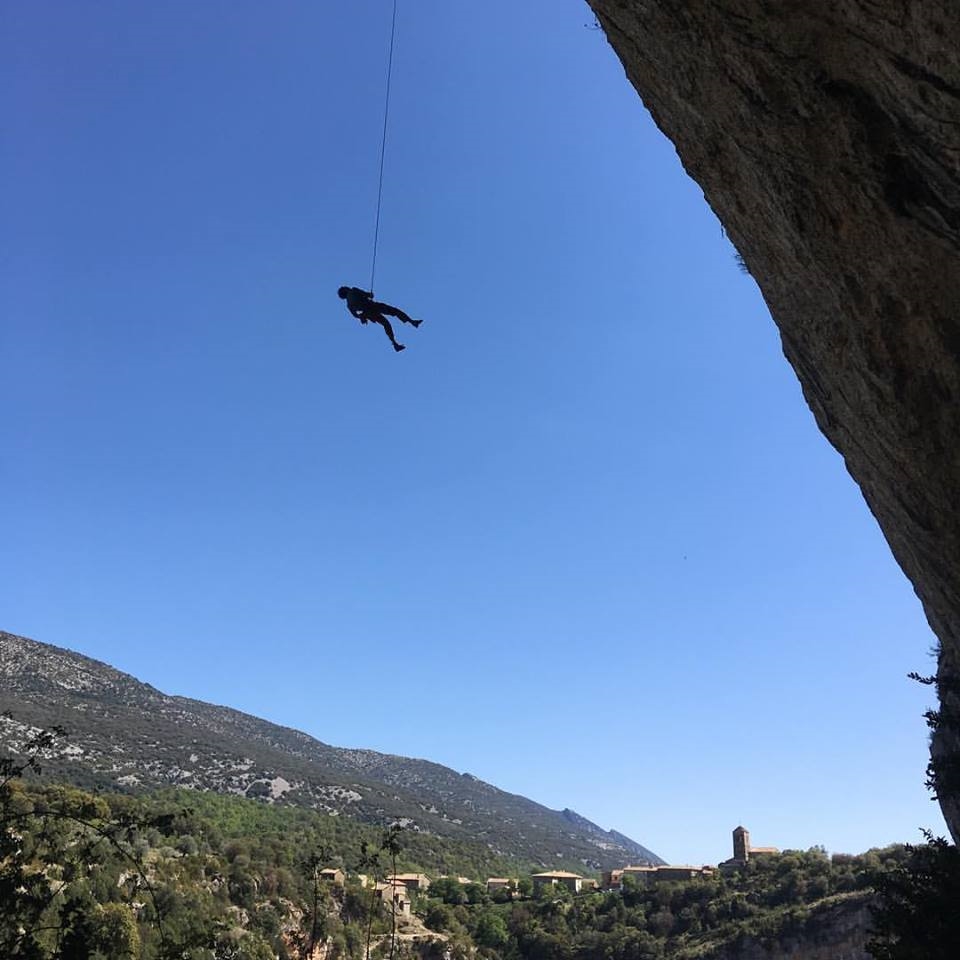 Day one done and the clips are in. Being lowered from Coliseum. Pic credit, Rich Kirby. 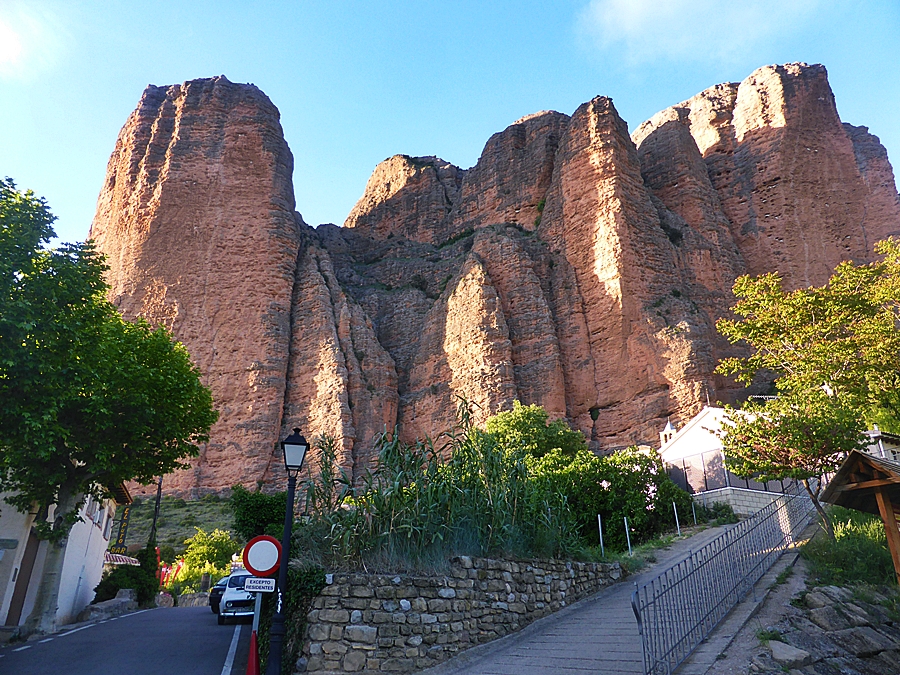 Later that same day, the conglomerate towers of Riglos came into sight. Vultures circled and the air became fresh and clear. The peace of Riglos was welcomed after the oppressiveness and the stink of piss of Rodellar. I could have stayed in Rodellar and continued to attempt Coliseum. It was going to happen soon (that’s what I told myself anyway…), but I really wasn’t that worried or even disappointed that I hadn’t managed to climb it clean. Hopefully I’ll get back there and give it another go; it came at the wrong end of a long trip and I had already screamed and pushed and laughed so many times on so many climbs.

The night before Rich had said, “Change your ferry, you’ll get it.” I explained to him I wasn’t that bothered, that after years of expeditions and all of the time and costs and failure, walking away from a forty metre rock climb didn’t feel like that big a deal. In fact it wasn’t a deal at all. The important thing was I had had a great experience trying – the improvement with each attempt was satisfying and thrilling, and on the final blast, I had so many people from different countries shouting and supporting, it was brilliant. I loved it.

Maybe I will never climb as hard as I possibly could while clipping bolts because of this lack of killer instinct, but that’s OK, because as I fall from another climb it won’t be the end of the world, it will just be the end of another attempt. And unlike the cows in the trailer I will live to enjoy another day. 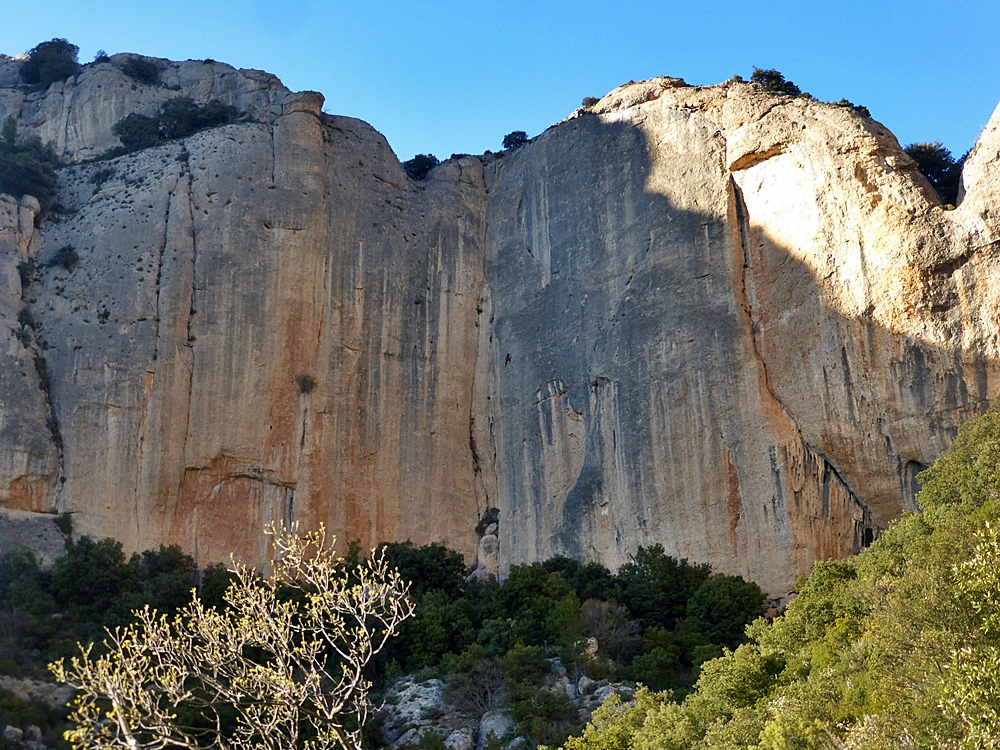 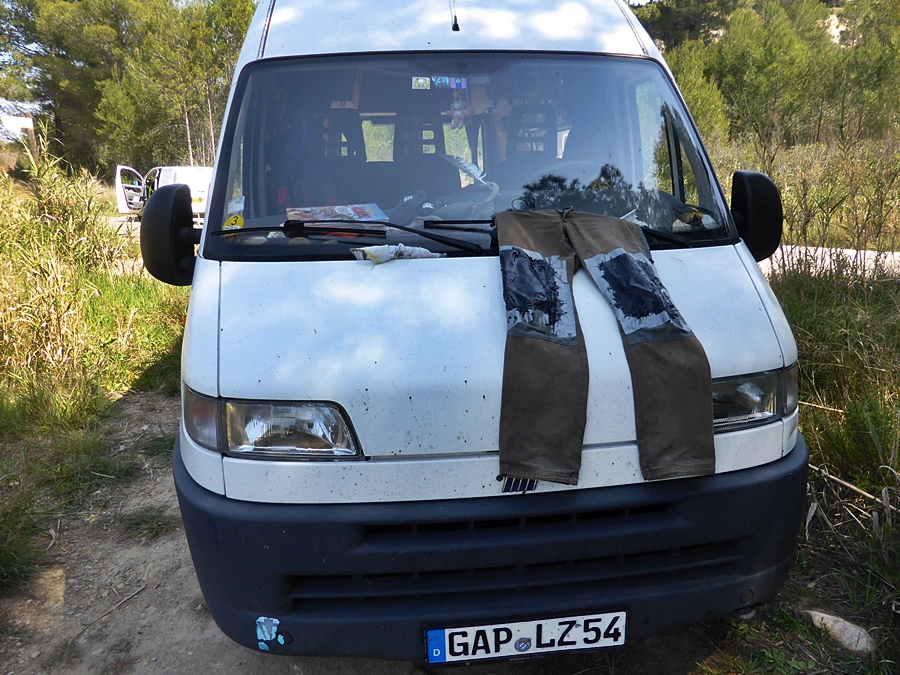 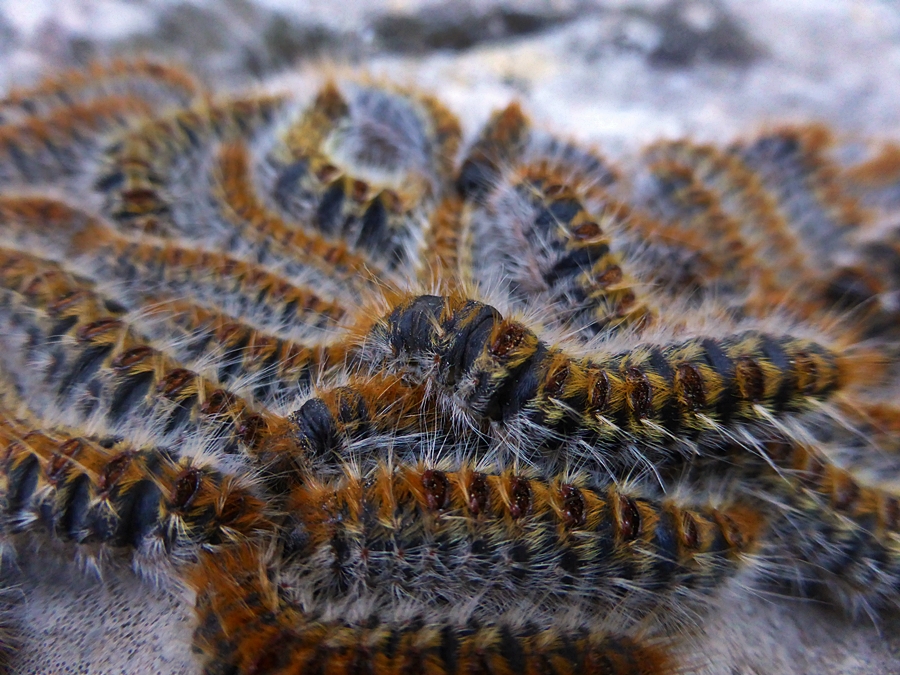 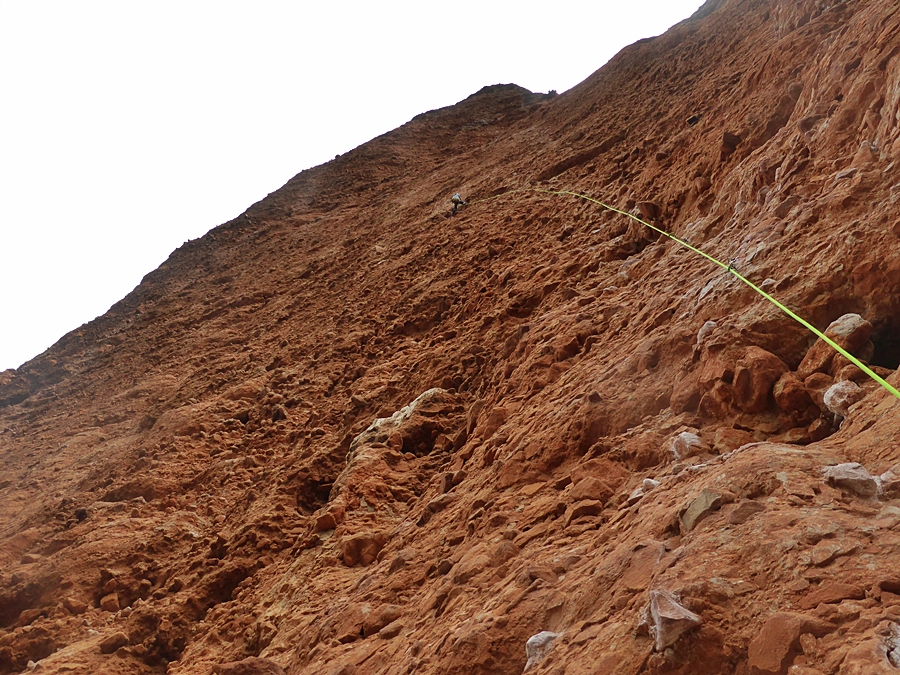 Rich Kirby on our third pitch of Zulu, Riglos. We climbed the whole route in five pitches running two pitches together. 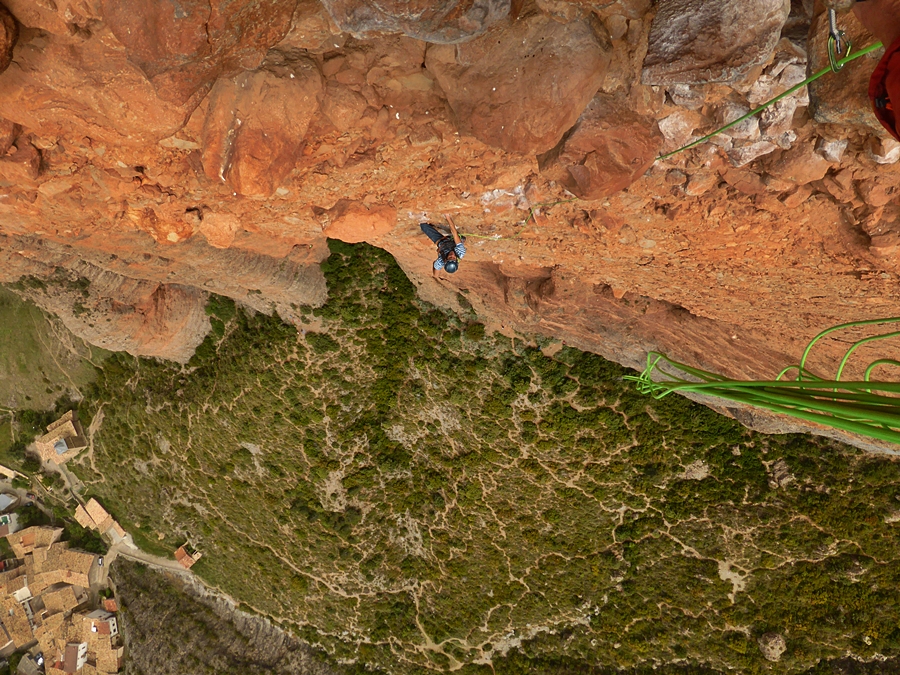 The penultimate pitch of Zulu, Looking down on Rich.

One Response to Driving north from Catalunya