Shifting Thresholds… A long letter of thanks. 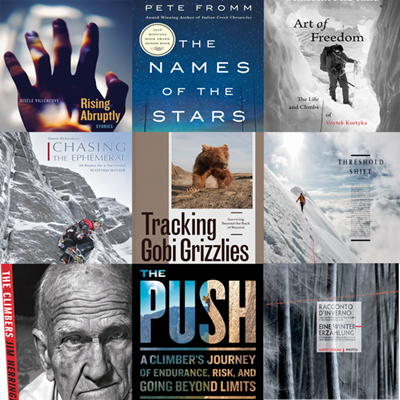 …The world is changing. I’m changing. People—or at least many of them—appear to be more each for their own: they want walls between them, and the louder an individual can shout the better they are thought. And what of solidarity, what of feeling of community, what of loyalty?  [from Threshold Shift Alpinist 57]

I’m working, stuck behind a computer and maybe feeling a bit low, lacking confidence, lacking drive, wondering where it’s all leading and I see a social media post, or more commonly, repeated posts, over and over – pictures of rock climbing, pictures of success in the mountains, a slither of ice, messages of fun, orange tufas dripping like jewels from the roof of a cave. And almost, almost without pause, the pressure I feel to try and emulate, the feeling of not living my life as full as I could, hits me with the force of a truck.

I write a blog and put a link on Facebook and within hours, maybe even seconds, a throwaway comment, hurtful and typed in a thoughtless second by a close friend, can be even more crushing. “But it’s just a bit of banter.” But it isn’t and the effects are long lasting.

I constantly battle with the concept of social media, the boasts, the one up man ship, the hubris, the advertising, the self-promotion and I especially struggle with Facebook, because I feel it has made its-self, something of a necessary evil for people like me, people attempting to make a living from what they write or do, although I do wonder if permanently signing off comes from a lack of courage and confidence on my part. I’m also confused why it is that people who earn money in ways that don’t require advertising share their lives and activities with such vigour. I’m confused why there is a lack of empathy for the effects their constant pictures have on others, people who are less fortunate, people stuck in a situation they struggle to escape. Are they trying to prove something to others or (more likely) themselves with their continuous posts? Do they care about the effects of their sharing on others and why is it we only see the happy times?

This being so affected by social media and the constant my-life-is-better-than-yours advertising may sound ridiculous coming from someone like me and given the way I live, but driven people are forever striving and the downtimes are full of self-contemplation and questions. Imagine then how bad this drip feed of fun and privilege can be for others?

It could be an age thing but I find hitting the publish button on a social media site can truly be traumatic, and boasting about achievements makes me feel incredibly ashamed. Hitting a re-tweet on something favourable that someone else has written about me takes serious contemplation and often I will not re-tweet or I will hit re-tweet only to cancel it a few seconds later, which then leads to me feeling rude for not acknowledging or thanking the person publicly. It really is a complex situation brought about, in the main, by very clever people working on our emotional fragility, ultimately topping up their already overflowing bank accounts.

But, over time, I’ve become more confident about not hitting the publish button. I have given up reading news-feeds, I have given up liking, wishing happy birthday, saying well done, giving it the big thumb or the smiley. I much prefer to talk, say hi, say thanks, offer support and encourage face-to-face. Interactions with people without advertising and gloating. I don’t need to advertise my support because if you are my friend you will know it is there. I’ve found I enjoy being out of the loop and feeling surprised when I hear first-hand stories from friends. This first hand, face-to-face interaction is rewarding and enlightening and it’s being lost. I prefer to give as little away as possible to Facebook (a multimillion dollar, advertising behemoth) so their algorithms have less information to profile me and then use to influence the way I live or what I buy. I still feel rude when I ignore friends’ posts and birthdays on Facebook, but this is what these influences of modern culture prey on: they love that humans have guilt and they love even more that people just can’t help themselves with their need for attention. I can’t imagine how much pressure there is on young people in our Facebook-Snapchat-Instagram-Twitter, society, and the damage it inflicts is, I think, becoming obvious. On the other side, for the young but confident (and sometimes the not so young) I can’t imagine how it is to be so at ease with their boasts. The world we live is becoming one big advert.

The internet is a wonder of the modern world, but a curse also, and social media is the worst offender. I think in time the effects of social media will bring about a massive rise in mental health issues. In fact, I’m sure it already has.

I have never done recreational drugs because I know I will like them too much. Like my old man in Threshold Shift, its generally black or white, full throttle or stationary, and social media, is addictive, but I hope, at last, I’m getting balance right, but I do think there will come a time it will go from my life completely.

I will continue writing in what I hope is a constructive and thought-provoking way on my blog, which I like to think is a bit deeper than many social media posts. People also have the choice to hit the open button on a blog, an important difference to the in-your-faceness of a news-feed that goes around and around and around, and the only advertising you’ll see is that of my sponsors, people I value and trust.

My article, Threshold Shift has just won an award, and I need to thank some people, because if it were not for them my article would not have been what it is and it would not have received the attention it has. And for this I am very grateful, because all said and done, a writer writes to be read. I’m probably fooling myself, but in a small way I hope my writing helps some people and makes a small difference, but maybe this is hubris of my own, because as I sit and write this, I know I will advertise it on social media, and because of this I have a strong feeling of confliction… #complicated

Threshold Shift, the whole article can be read on Alpinist website here

Katie Ives and everyone at Alpinist Magazine, including Christian Beckwith the original editor. I was first published in Alpinist 5, and ever since the people at Alpinist Magazine have had a firm belief in my writing and have helped me tremendously. Long may the magazine continue because it gives such a valuable platform and support for climbing writers who strive to be a little different.

Zylo my girlfriend who is patient, supportive, a great editor and a fine sounding platform and puts up with me even when I become obsessed.

Jo Croston and everyone at the Banff Centre who have been incredibly friendly, helpful and supportive and like Alpinist Magazine, if it wasn’t for the Banff Centre and the platform it offers where would we be.

John Long, Kelly Cordes and Angie Payne for being shortlisted alongside me for this award. I constantly remind myself that awards, in general, are the personal preference of a few people and it does not devalue work when not selected. I have not read any of Angie Payne’s writing but John Long and Kelly Cordes have always inspired me and I’m sure Angie’s writing would also, thanks for the inspiration.

Finally, thanks to Mayan Gobat-Smith, David Stevenson and Ian Welsted. The cheque is in the post, although since Brexit it’s worth very little.

3 Responses to Shifting Thresholds… A long letter of thanks.