Modern Scottish climbing fables #3: Just because you share the same birthday as Jesus, doesn’t mean you can walk on water. 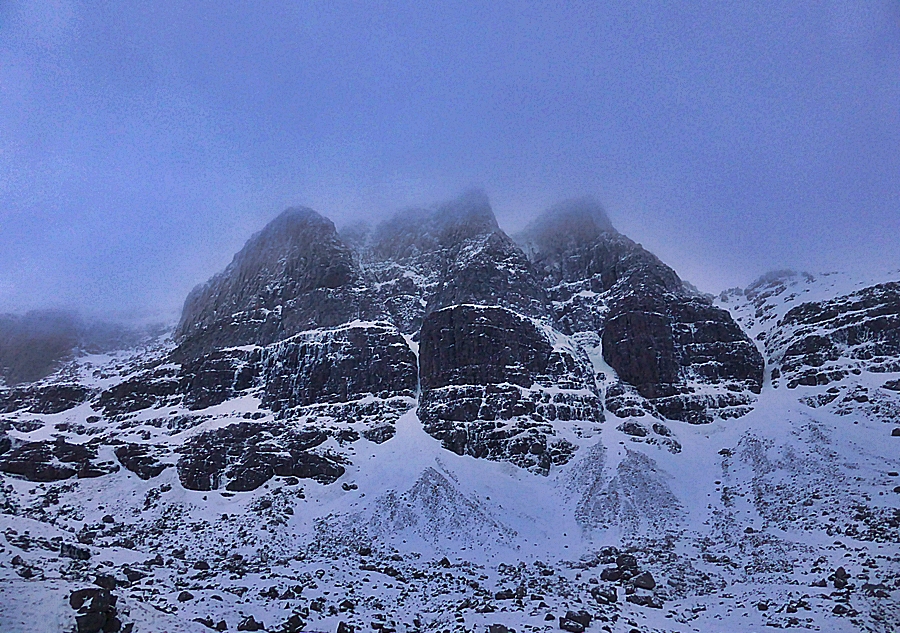 The Triple Buttresses of Beinn Eighe.

I have walked the long and gently, uphill path to Beinn Eighe’s Triple Buttresses many times. I have plodded past the smooth rocks scattered randomly amongst the heather, and carefully hopped the stepping stones that lead to that wonderfully wide vista of rounded mountains and snow-covered ridges. In later years, as objectives changed, an in over the top approach has been more usual, but on occasion, around the back is still used. My first climb, although for me, not the first time in the coire, was on a climb called Achilles. Achilles is not actually on the Triple Buttresses of Beinn Eighe, but on the steep, dark cliffs of Sail Mhor. The cliffs of Sail Mhor are on the right when entering the hanging coire, whereas the Triple Buttresses form the natural barrier at the back of the coire making it an even longer approach. On that visit to the coire, Jon Bracey and I had a late start. The snow had been down to the road and delayed our arrival, and after four hours of knee and waist deep, we decided we had done enough. It was already midday, and a line to our right – a line of icicles and daggers hanging from the entrance of a cave with steep rock above, looked worthy.

To cut a long story, Jon and I had a long day that continued into the early evening. We definitely had a bit of a tussle. We both took a big and rattling fall, but continued to the end of the climb with the direct finish. A traverse of the summit ridge, in a white-out followed, I navigated, (ha, how times have changed!) and a careful trudge down the steep slope, in the dark once again, landed us on the path and at last the van. They don’t make grade IV’s like that any more! Climbing on Beinn Eighe, or Sail Mhor had made an impression. 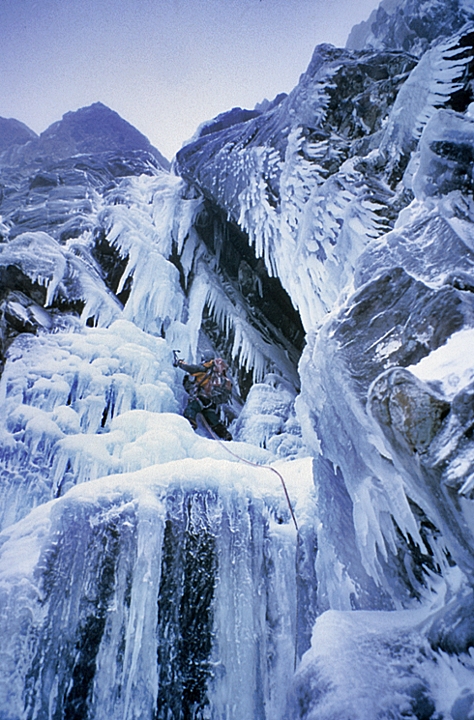 Old school. Rucksack, warthogs, leashes, straight shafts, big boots and grade IV. The guidebook description said, ‘After the ice, traverse left into the gully, although it may be possible to continue direct.’ Jon and I continued direct, and both took a big fall attempting to pull an overhang. It went eventually though. The picture, taken by Jon, is a scan from a slide.

The second climb, a few years later with Jules Cartwright, also made an impression because it was Piggotts Route on the Central Buttress, first climbed in winter by Alex McIntyre and Al Rouse, two climbers, who, in my earlier climbing life, had been revered.

Climbing, not only on Beinn Eighe, but in the Northwest, has always very much appealed and suited. I prefer the space, and the lack of crowds, and the extra effort needed to get there. I prefer the feeling of ancient, the smoothed-round mountains emanate old – the mountains almost speak of times past.

Earlier this winter Matt Stygall, Tim Neill and I climbed the East Buttress on Beinn Eighe in a day of less than perfect weather. Most of the time I like to climb routes that challenge me and to do this I prefer the weather to be calm. I do not climb at my best when soaked from the walk-in, and I do not enjoy being cold and wet, after all enjoyment is what it is supposedly about. But in some way, climbing the east Buttress in poor weather felt the right thing to do, (or at least, OK) as the difficulties are moderate, and if anything, the climb became more memorable because of the buffeting winds and the hail. The place was wild and empty, and to be there felt privileged. It was also relaxing for me because I was climbing alongside two mountain guides who would navigate me from the summit in the white-out. 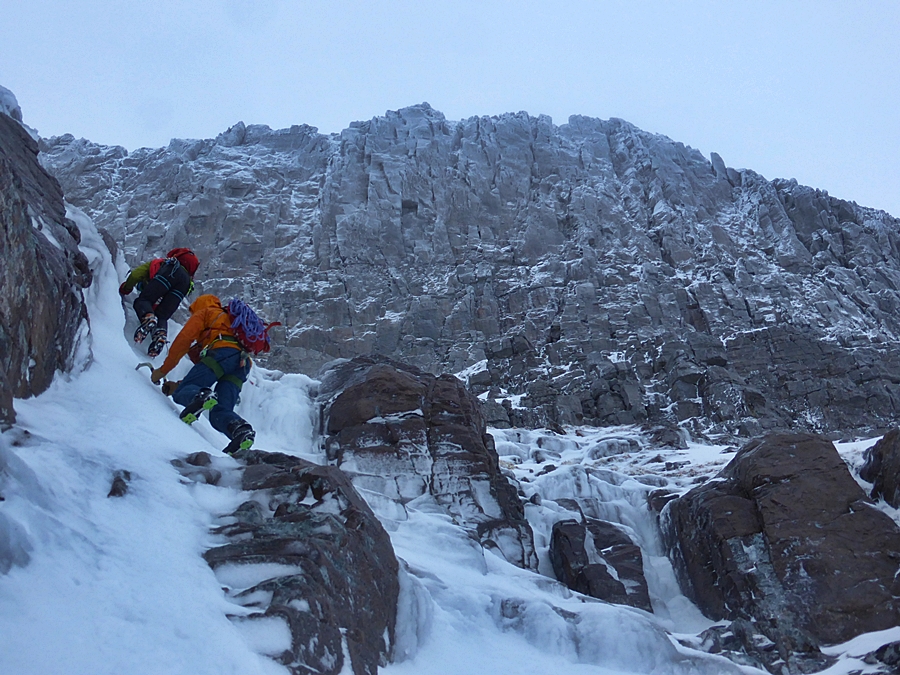 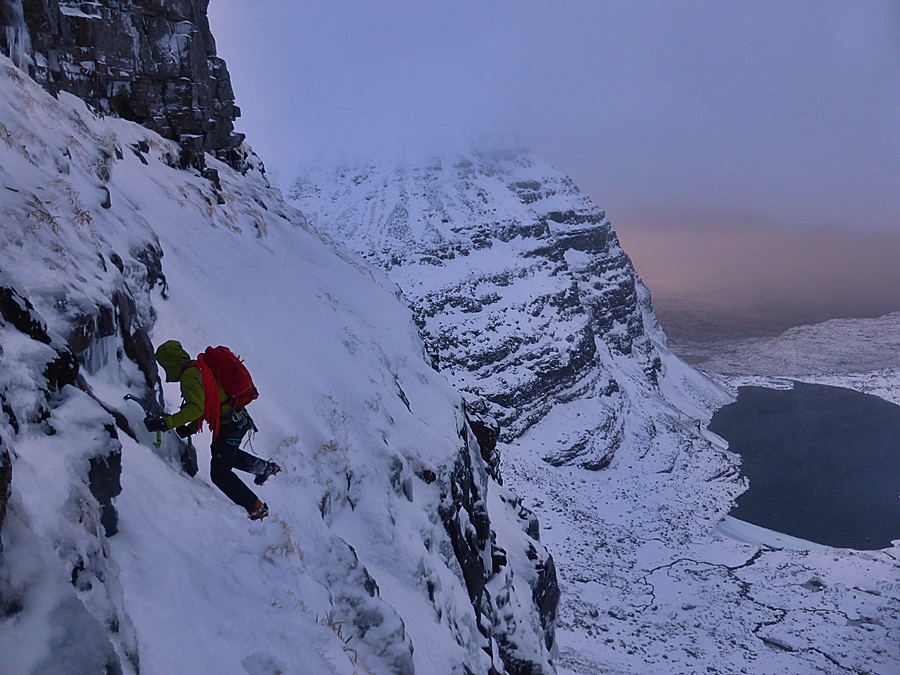 Tim Neill traversing the East Buttress to find the beginning of the route. 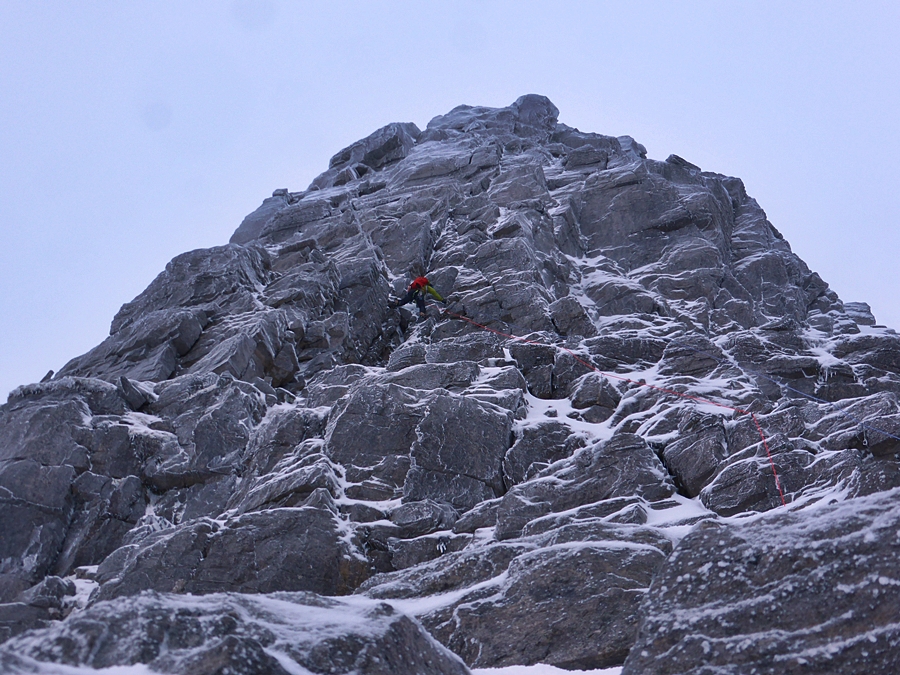 Tim on one of the upper pitches of the East Buttress. 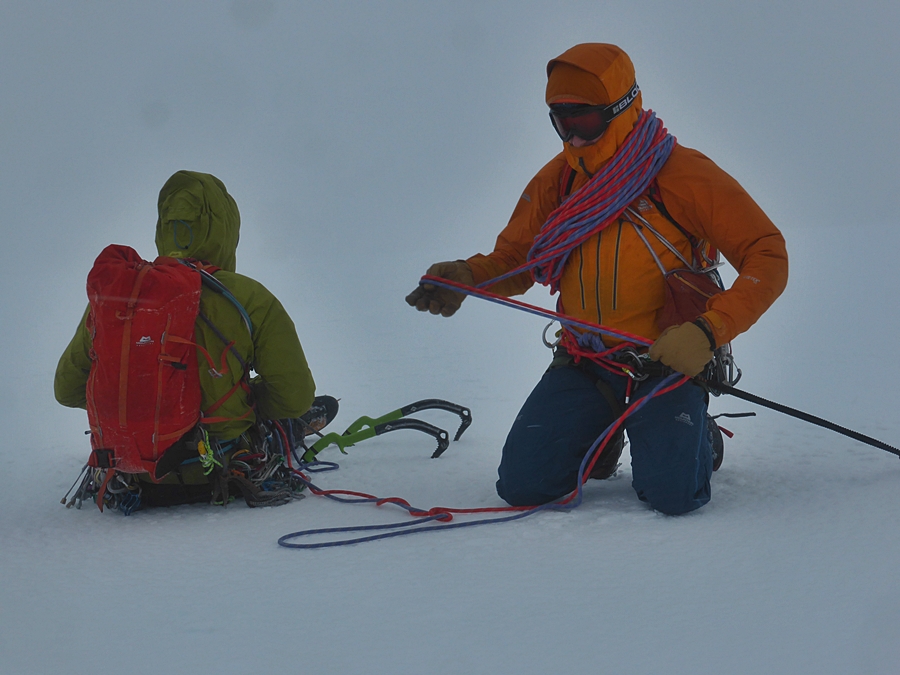 I wanted to share this place with Zylo, my girlfriend, who had never climbed on, or seen the Triple Buttresses, and several days after climbing the East Buttress we returned together.

We left the car park in the dark. Our headtorches lit the track. Lying, and surrounded by snow covered heather, just a few feet from the path, was a stag. We took a moment – the stag looked at us from beneath his white coat that covered his red coat and we looked at him. He didn’t move, even though we were close enough to brush the snow from his antlered head. After a few minutes we left him alone and continued walking. A shower of hail stones made me hide beneath my hood, and beneath our feet the snow and rounded lumps of ice built. Reaching the coire, the wind and snow increased, and we made our way around the left side of the small lochan aiming for the West Buttress, our intended climb.

In front, I kicked a trail crossing a flat section of snow, when my foot broke through what turned out to be the partially frozen surface of a pool. Stepping forward quickly, my right foot plunged through the surface and then both my hands and in a second, I was wading in chest deep water. Zylo laughed, and then grew concerned, as I waded and floundered and struggled to get out of the pool, but get out I did, and that ended the climbing for that day. 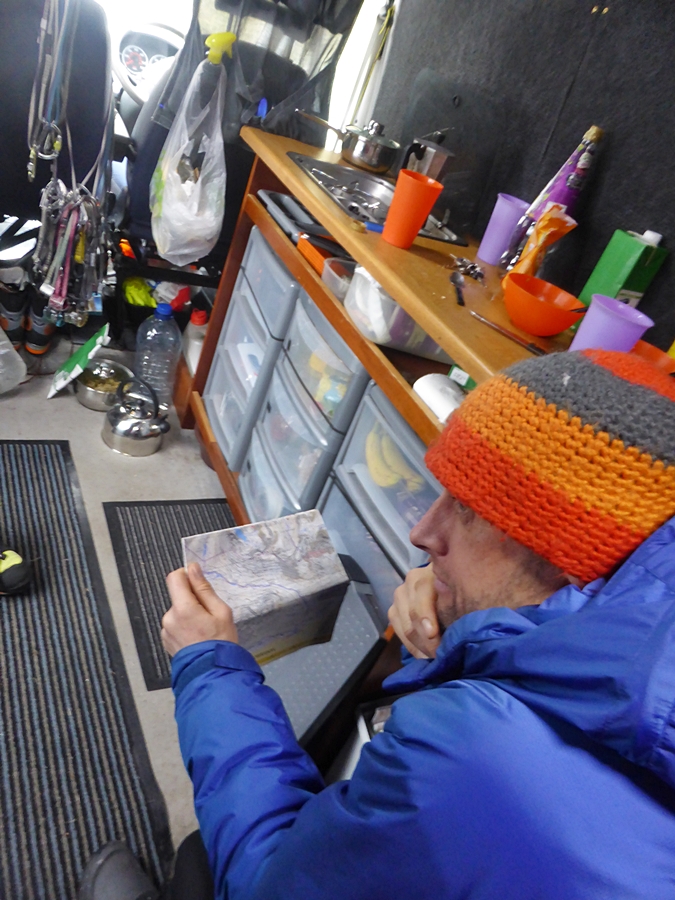 Keith checks the way, because when it comes to navigation, he knows he’s on his own! Inside the bigger white van the night before the climb.

A few days later and with dry feet, I parked my white van alongside a bigger white van. Keith Ball was ensconced inside. The lay-by, beneath Achnashellach train station, near Loch Carron in the Northwest Highlands, was covered in deep snow, and the falling snow, blown on a cold wind, deadens and muffles any sound. Almost, without exception, whenever I drive the narrow roads towards Applecross and Loch Carron – the white passing place signs, Eilean Donan Castle, the train line running alongside the road, I reminisce, remembering a family camping holiday to Applecross years before, and the snow also brings back childhood memories…

… It was six p.m. and dark. The power was off in 6 Brookhouse Road. The heavy snow had brought down the telephone cables. The road passing the front of the house was covered. The rose bushes in the small flowerbed beneath the window were buried. A car sailed past, its headlights illuminating a million falling flakes, its tyres making a swishing sound.

Dad and I stood in the front room looking and watching while the candle in its brass holder flickered yellow. “Mum should be back by now.” Half an hour passed before a green, short wheel base Land Rover pulled up outside the house. Mum jumped out and waved goodbye, before wading the snow to reach the back door.

Mum’s car, the old blue Hillman Minx with the diesel engine taken from a van, was stuck in a drift of snow on the steep and winding top-lane, somewhere above the Rose and Crown pub in Dilhorne. “What made you come that way?” Dad asked. “I stopped and was just about to turn around to take the longer road to Cheadle, when a snow plough slowed and the driver told me to follow. Silly bugger got stuck, so I thought I’d carry on anyway. Lucky for me that Land rover was behind when I skidded off the corner into the snowdrift.” Mum’s hair and face were wet, the warmth from the log burner had melted the snow sticking to her hair. “OK, I’ll get a shovel and some sand and we can drive back, let’s see if we can get up there and dig it out before the snow gets deeper.” Mum turned to me, “Hi my love, how are you, I’ll get some tea on in a bit when we get back.”

I stood looking out of the front window. Yellowing candlelight flickered across the herringbone bricks of the chimney breast. The log burning cast iron stove pumped heat and inside the stove, the burning logs made a snapping sound. Outside, the snow continued to fall and I watched mum and dad slowly drive away heading towards Dilhorne. The back lights of dad’s car, blurred and dimmed before disappearing into the blizzard…

… At 6am, Keith Ball and I started walking from our white vans and towards Fuar Tholl, the snow was still falling. We walked the track past the lonely building that passed as a train station, before crossing the tracks and heading onto barren, snow swept moorlands. Keith was navigating and the snow was deep.

It was light now, although seeing anything through the driven snow and the cloud was difficult. We dropped down from where the path should have been and Keith, in front, crossed a large stream that flowed with gurgling peaty brown water. Following, I stepped onto an ice covered boulder, and slipped, diving forward, arms and legs plunging into the water, both boots filled.

Sitting on my rucksack, I poured the water from my boots, wrung both socks and replaced them. “Guess that’s it, we should go back?” Keith said, but as I stood with the snow and cloud swirling all around us, I decided I couldn’t turn now, not again, we had already been out here for three hours and the cliff would have be in sight if it wasn’t shrouded. “Let’s keep going, its only wet feet, we’ll be back to the vans later.”

And we did, and we were… 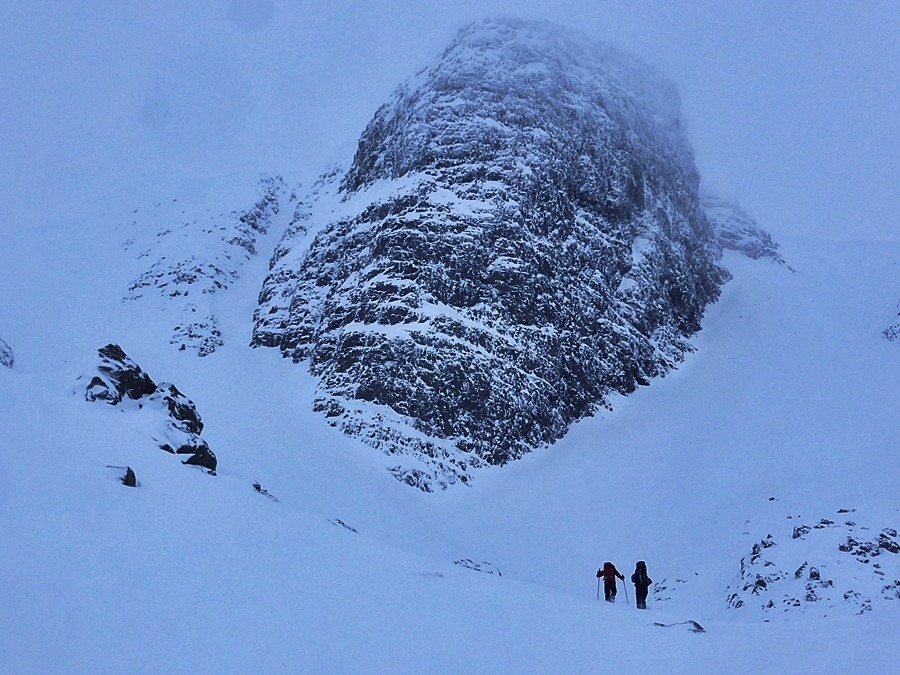 Fuar Tholl’s Mainreachan Buttress. Snoopy, VII/7, first climbed by Chris Dale and Andy Nisbet, March 1998, takes the left to right, snowy ramp on the right-hand side of the buttress. 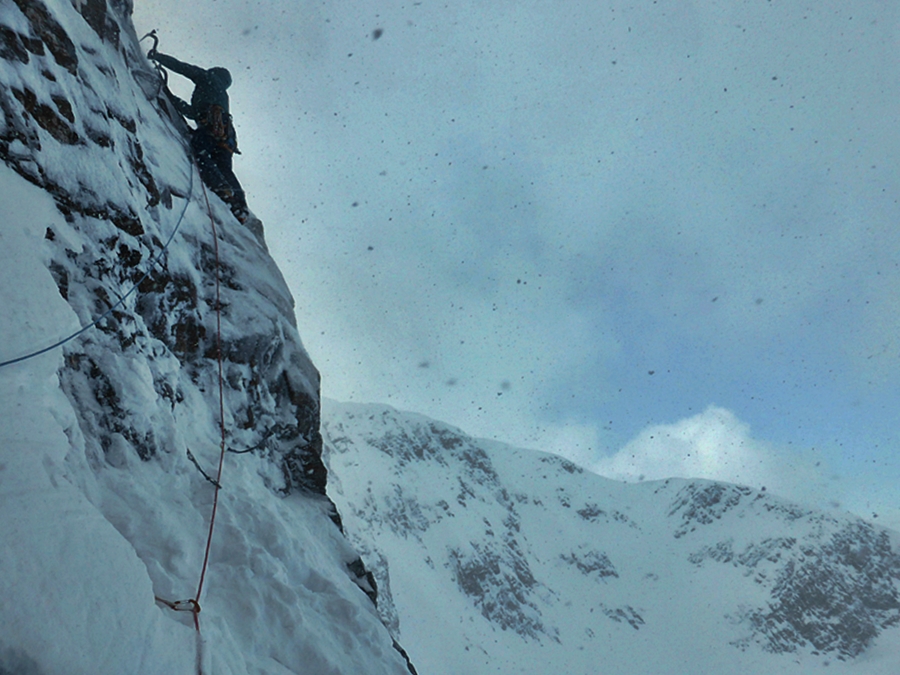 Keith and I climbed Snoopy in 7 pitches. It is possible to run a few together. This is Keith on the third pitch after one of the steep and insecure shuffles! 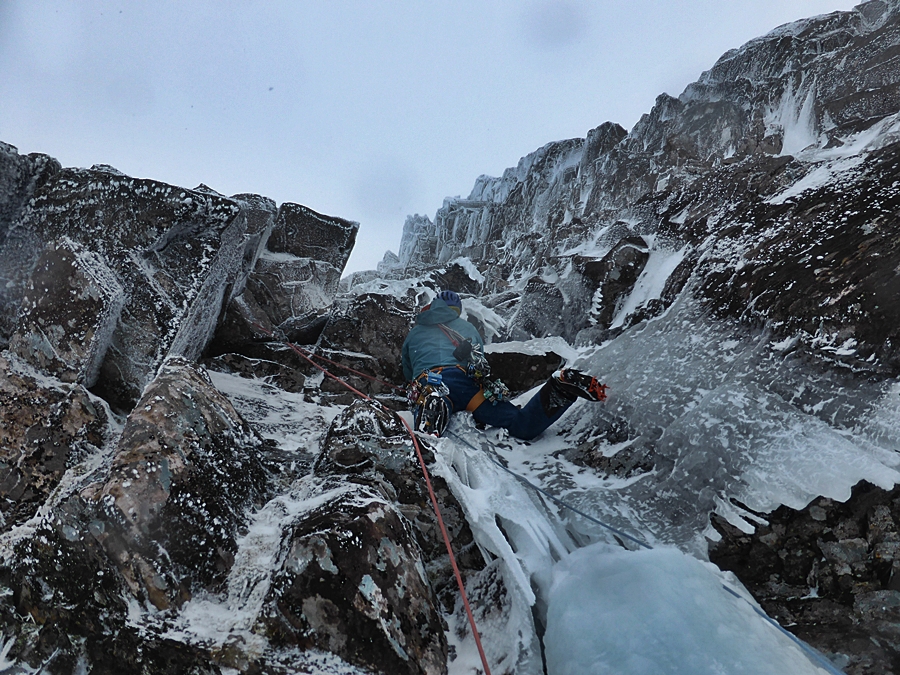 I climbed, what in the description was the fourth, crux pitch – a pitch of superb thin ice with minimal protection, and belayed on a thick pillar of ice beneath this, the fifth pitch. Keith climbed direct instead of following the description, which describes a left traverse to join the line by moving right again higher. I thought by climbing direct it made this the technical crux of the climb, but it was well protected and very worth doing.

2 Responses to Modern Scottish climbing fables #3: Just because you share the same birthday as Jesus, doesn’t mean you can walk on water.