A new route, a new perspective? 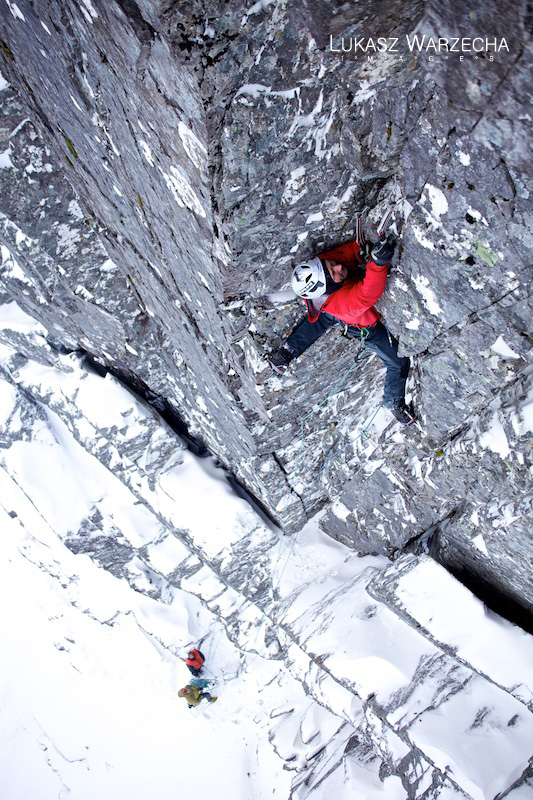 On Thursday 17th, Andy Turner, Bruce Poll and I decided to have a look up Tower Gully in the Echo Wall area, or to be more specific to the right of the buttress with the great chimney. This buttress does not have any summer or winter routes at all. The wall is split by a wide crack/chimney somewhat reminiscent to Darth Vader low down and goes into a very steep wide crack near the top, with a thinner crack running right to a recess and a seriously overhanging top-out. I eventually climbed this right hand line as the thinner crack looked protectable as I had already used all of the big gear.

The main pitch of The Pretender is approximately 25-metres long, with an introductory tech 3 pitch of about 30-metres to get you beneath the wall. The second pitch is sustained with loads of tech 7, 8, and a few moves of 9. Knee bar rests, head jams and shoulder jams are advisable and available for the weak (me) or not needed for the strong, (Andy turner) and a very tight rope on occasion was welcomed by Bruce! Hand jams, drop knees, and all modern techniques are required. But the main pitch is very well protected by a good rack of cams up to number 4 and a good selection of wires and a few Torque Nuts, (hex’s for the old fashioned!). The overall grade of the route is VII/9. In climbing, and with the subsequent grading of this new route, I got to thinking about grades and our winter climbing ethics and the style we use.

It took a while for me to settle with VII/9 as the climb is very short, very safe, and easy to approach, and easy to get off. No commitment required, just arms and go juice and the ability to hold on. I did think of grading it on a system that would make Robbo (Guy Robertson) happy and give it III/9, but that would have been a tad political and silly although Andy and I decided if a grade of III/9 was given you could continue to the top of tower ridge which would then bump the grade to IV/9, and if you go to the summit you can give yourself the full V/9 tick. Obviously I’m not being totally serious but I’m not sure how we all move on with our winter grading system, or whether we need to. In rock climbing it is accepted that an E1 in, let’s say, Bus Stop Quarry above Llanberis next to the road, is very different than an E1 like Shrike on Cloggy, but both are E1 and people appear to accept this and know that Shrike is a mountain E1 in a lot more of a serious situation which requires a whole bunch of skills above and beyond an E1 next to the road like Fools Gold in Bus Stop.

In winter it appears to be different, and to tell you the truth i do struggle with the grades and grading of hard, short, easy to get to routes in the Corries, or routes like this one, and I totally see where Guy Robertson is coming when he makes the point,

“Both Pete and I feel strongly that there is considerable over-grading surrounding today’s trendy, short routes.  I’ve climbed quite over two dozen grade VIII’s and IX’s now – including others as well as my own – and most of these I’m fairly sure I could have led all the pitches if push came to shove.  This route however (and The Steeple for that matter) are in a different ball park altogether; there’s just no way on earth I could conceive of leading it from bottom to top [by myself].  So does that make it grade X?  In my opinion it doesn’t – but other route grades would need to come down.  If that’s not going to happen then maybe grade X it should be.”

But the system we have is the only system and we have to use it the best we can and even though I can see where Guy is coming from I’m not sure you can start to grade a climb on whether you, as an individual, can lead every pitch, or whether you need an equally strong team so as to climb the whole route by swinging leads. Robbo, and Pete are very talented climbers who get-off on big adventurous climbs, maybe should realise their talent and just grade their climbs and then let the rest of the climbing community make up our own minds and not worry so. In fact, don’t we all do this kind of thing anyway in both summer and winter? I know when I look up at a climb one of the first things I do when assessing it is to see who the first ascentionist was. If it is Mick Fowler for example you can generally expect unbelievably adventurous run out and loose in summer and two grades harder in winter.

Bruce Poll followed The Pretender, that’s Bruce Poll of folk law fall from Knuckleduster and the first winter ascent of Arthur, he said to me when I suggested the grade of VII/9, “it’s a lot harder, it’s harder than Soux Wall which is given an overall grade of VIII.” Having never climbed Soux Wall I can’t say, but I felt to give this short route a hefty grade of VIII/9 which after all would have been more difficult than The Godfather, or Blood Sweat and Frozen Tears, or The Needle, would have been ridiculous and not representative of the climb, the situation and the commitment required, or the lack of it.

So I suppose what I’m suggesting in a round-a-bout kind of way is grades and the people putting grades on new winter routes should begin to take in to consideration the situation, the commitment, the distance from rescue, the distance from car or shelter, the descent and the extra skills required which do not necessarily involve the actual climb and even their own personal preferences to adventure and training and realistically look at how good they are, or how good they think they are and then folk who want to repeat the climb will just have to use their own judgement to come up with the obvious conclusion that a VIII in the Corries is not the same as an VIII in Torridon. A different set of skills will be required for both, meaning a VIII in the Corries will possibly have harder climbing of a more sustained nature over a shorter length but the over-all length of the climb will be shorter than a VIII in the wilds. And maybe, if you jump on a Robbo route you should expect adventure and run-out and big commitment at a relative low grade?

All said and done, climbing is about personal experiences and we are all different. I prefer the big long adventurous routes in the middle of nowhere. I remember these days vividly and they give me a massive reward, but that’s just me and like-minded people like Robbo and Pete Benson to name two, but there are also the folk who want to minimise the walk in and save time for savage technical pulling at the top of the game, which challenges their physical limits and makes the most of all of that training. These short routes will also challenge mental limits all be it differently than the mental challenges encountered on a route way out in the middle of no-where, but there is definitely still a big psychological element to tackling a short route. To quote Andy Turner, the ground is still as hard and unforgiving in the Corries as it is in Torridon. People who prefer this type of route, and there are many, will have just as amazing and vivid memories which are as valuable as my own.

Climbing short very technical winter routes and trying to compare then with long adventurous winter routes is impossible and not really worth dwelling on and given our system which does not differentiate between the two, we will just have to plod on and try to work it out for ourselves knowing that if we get in the shit on one type of climb we may need to work a bit harder to sort it out!

I think a lot more serious situation starting to arise in Britain’s winter climbing game is the sterilisation and watering down of style. Britain’s crags on the world scale are nothing, they are small and insignificant. The thing that makes our crags special and memorable is the style in which we climb them. In my mind with every drop in style from ground up, placing gear on lead, leading with intent to get to the top clean and no abseil inspection, we are diluting what makes our crags and our climbing special.

How long will it be before new winter routes and established routes are top-roped, climbed with in-situ gear, and red pointed? Not that long as the seed has already been sown over the last two winters. And when the majority of winter climbers are going out with a rigging rope, or are intent and happy to make a few moves before sitting on gear, then placing some extra gear while resting before moving up a few moves and then resting again, etc, etc, before finally redpointing a climb with the gear in place, we will have lost what makes our climbing special and our crags will just be small and pissy and insignificant and we all may as well go abroad to some properly big crags where the style does not make such an impact on the experience.

Guy Robertson expresses brilliantly what winter climbing should be about and as with most types of interaction that I have had with Robbo, I’ll leave the final word to him…

… Whatever the grade, it’s kind of irrelevant.  The [Shelter] Stone has some of the most inspiring and challenging winter climbing this great country has to offer.  For a well-balanced and keen team there’s probably nothing anywhere else to compare!”

6 Responses to A new route, a new perspective?