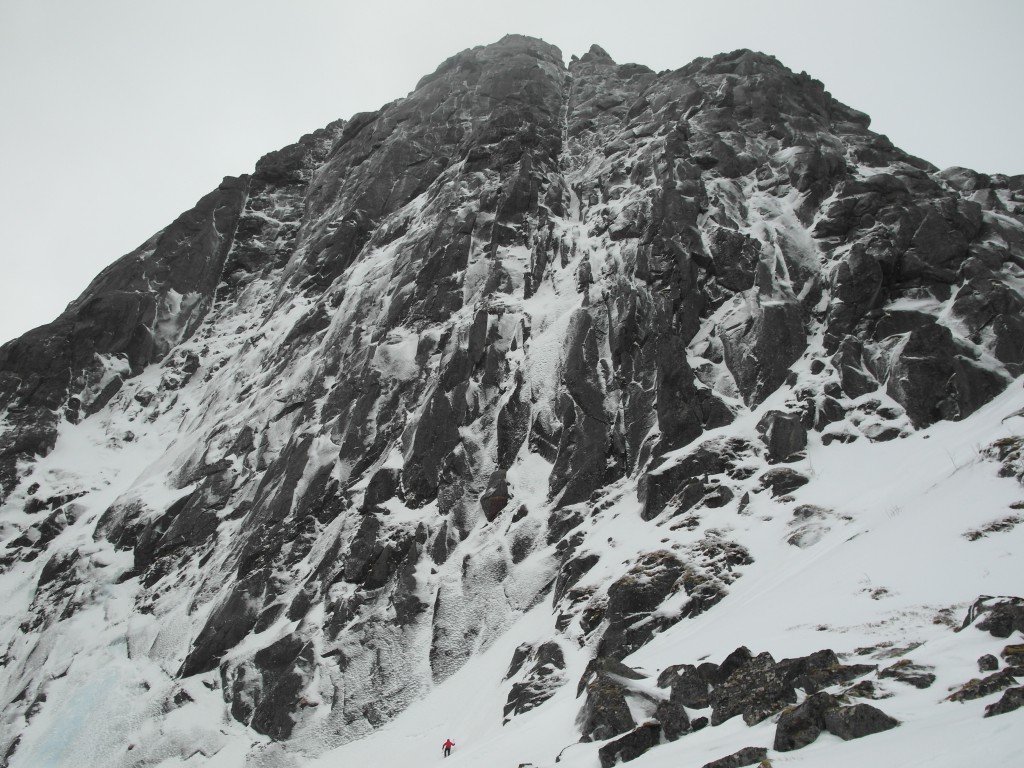 Bridge-tunnel-bridge-tunnel-tunnel-bridge… Sleet pummelled against the windscreen. Its way past midnight. In the dark I can see the sea ripping against the shore. The side of the road is wave washed. Spume and salt mingle with dark and expectation and fat flakes of wet snow. White horses gallop across the surface of ice puddles. The van transporting us to Lofoten swayed and delivered team Benson, Turner, Warzecha and I to the lodge in the centre of town. It was 2am as we slid into the self contained apartment.

Monday morning slithered into grey and cold and snowy. We drive out of the tin roof, wooden house town and along snow covered roads. The hire car splutters. 278000km on the clock. The car was tired… I hoped after tomorrow I would be also.

On our spluttering tour we scoped a lot of potential for new lines and eventually settled on one of the final things we saw, a splitter ice-crack-chimney on a perfect pyramid peak…

“Oh that line, yes, the Swiss climbed it in 2009, spent all week going in and out, in and out.” Marko Prezlj explained later that evening as we mingled with the rest of the collective for this new routing extravaganza.

“Bollocks, oh well, we can climb the second ascent.”

Mortin Blixt (what a great surname), the local guy running this meet powered up his computer and yes, there was a topo, and pictures of our line. Nothing Compares to You, M6- WI6. 420m.

Slippering. Skidding. Underfoot the friction was low. But for the first time ever while walking into a winter route, I was not sliding on ice, but seaweed. The four of us scuttled around the dark, wind-whipped fjord, ancient moss covered trees bent in the wind. The pointed peak eventually came into focus, but its edges were blurred by cloud and spindrift.

Two and a half hours later necks were crained. Eyes had to be sheltered from the pebble dashing our pupils received. A soaring Shelter Stone face slapped with wind and snow reared into the cloud filled sky. The wind roared over the col where we cowered beneath this supplement fed, outsize Scottish crag.

The team agreed. But still we didn’t move apart from when the wind insisted.

In a lull, Benson went for a quick look at the bottom of the face, he swung an axe. It stuck to the thin white bubble covering the compact granite. I then knew it was only a matter of time, and in the worsening forecast that predicted heavy snow and gails, we would be going up.

Up, and up and up. The wind tore at the col. Plumes of powder curled like breakers. Up, and up, ice covered slabs, clotted rippled corners, choked cracks, turf blobs… We were going to make it… Three pitches from the summit, the storm hit and the face shed its white into the gutter that was our climb… Pounded, pummled,blind and choking. 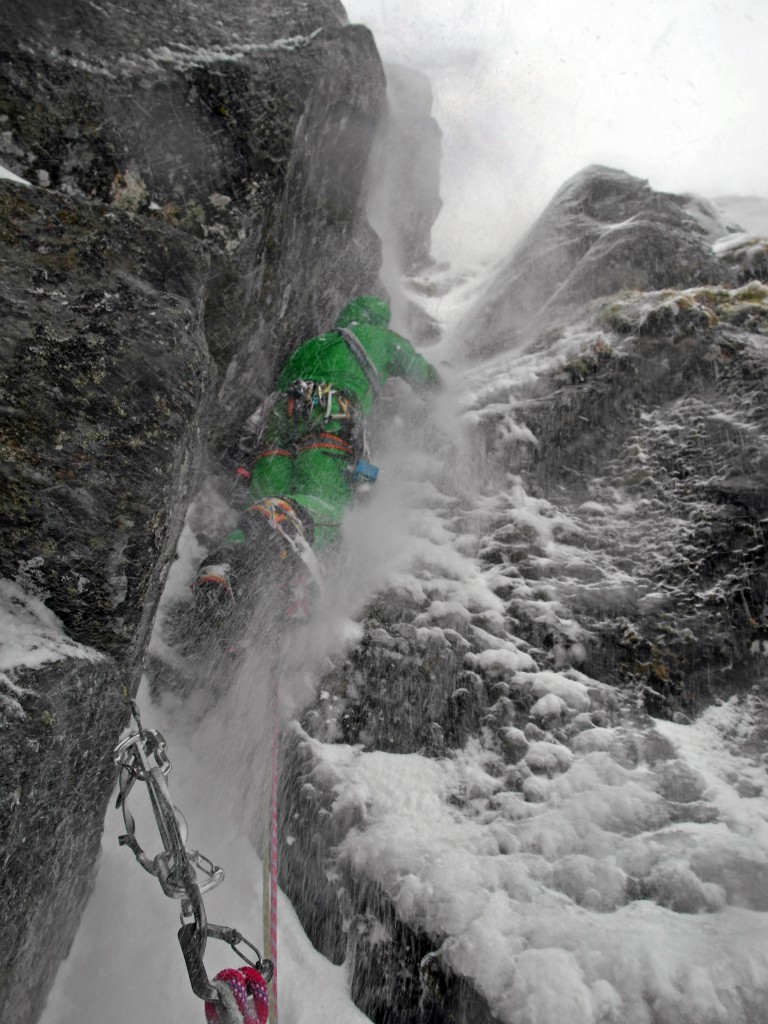 We needed to run.
And run we did.

Today the rain smashes into the surf-froth pounding into the rocky inlet just outside our warm wooden haven. Cormorants huddle on a sea scoured rock. Seagulls swoop and scream. The smell of the sea blows through the streets. Fishing boats line the harbour, redundant…

But what about tomorrow?

2 Responses to Nothing Compares…