Building Steam in the Sea of Snow 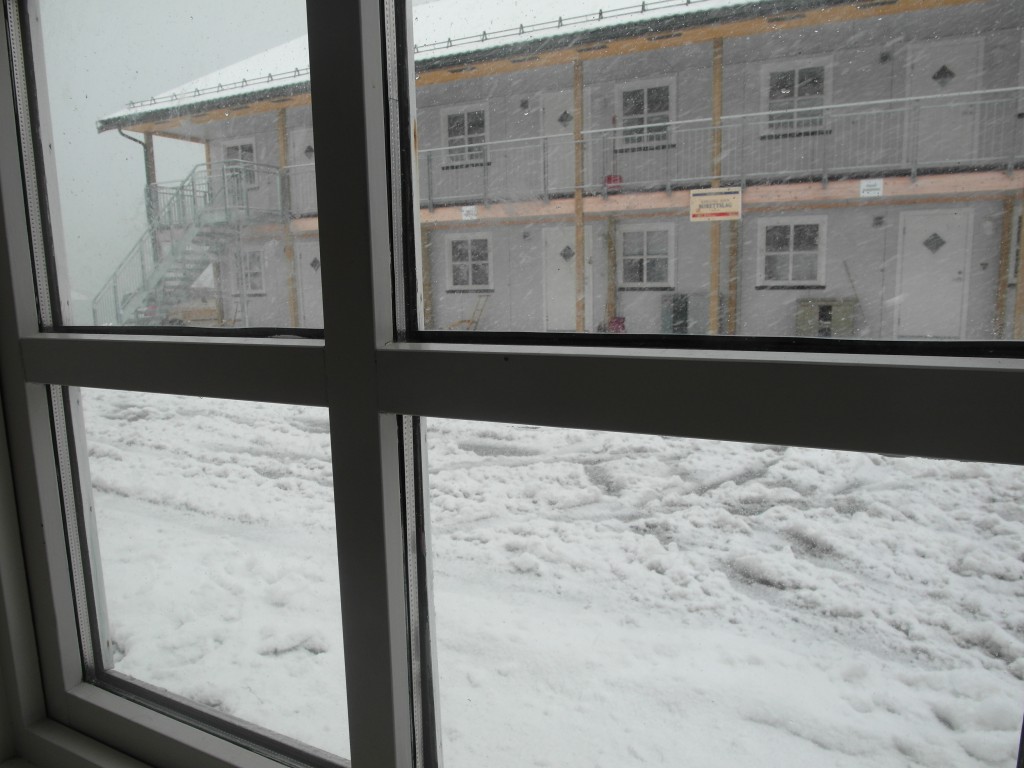 Driving. Headlight beams light the dark and capture nothing but white. The Cairngorm Plateau in full blizzard has hit the Lofoten roads. Once again we are hoping to climb the Odermatt/Röthlin route, Nothing compares to you, high up on Abrahams. We park the car in the empty drive of the lonely yellow house and procrastinate. Condensation runs in rivulets down the inside of the car windows. Clearing a viewing hole – driving snow, bent trees, strafing spume clouds – the conditions for climbing high, or even climbing, are not the best, but eventually we leave the car and begin to walk. The walk lasts five minutes before another heavy snow squall hits and our hill disappears behind a blanket of pain…

Back to the car.

Options open, we drive back to Lofoten and beyond, heading toward a hill called Vargerkalen, and a corner system spotted on day one.

Vorgakallen is big but low, the sea butts against the opposite face to that which we were hoping to climb. A short approach seals the deal, we take the plunge and walk.

Spindrift pours down our corner that, after much plunging and wading and crossing of avalanche debris, has turned into a huge gorge filled with a wave of rotting ice.

Soloing over the large blocks of avalanche debris and into the bowels of Vorgakallen I have a flashback to 2003 and my first attempt to climb the southeast face of Jirishanca in Peru and of being swiped unceremoniously 400ft down the face. Would I have been climbing in conditions like this back home? I’m sure I would not!

Two pitches up, the gully filled with fresh snow spewed powder strong enough to knock me back down a bloody long way. I waited beneath a steep corner and timed it well to climb the rotten ice above, that was reminiscent of the crux of Point Five Gully on Ben Nevis, before belaying to the side.

Climbing higher and deeper into the gully on the next pitch I began to look for safer, more interesting options and by the time the other two had pulled onto the snow step where I stood belaying, a possibility on the left face had been spotted. 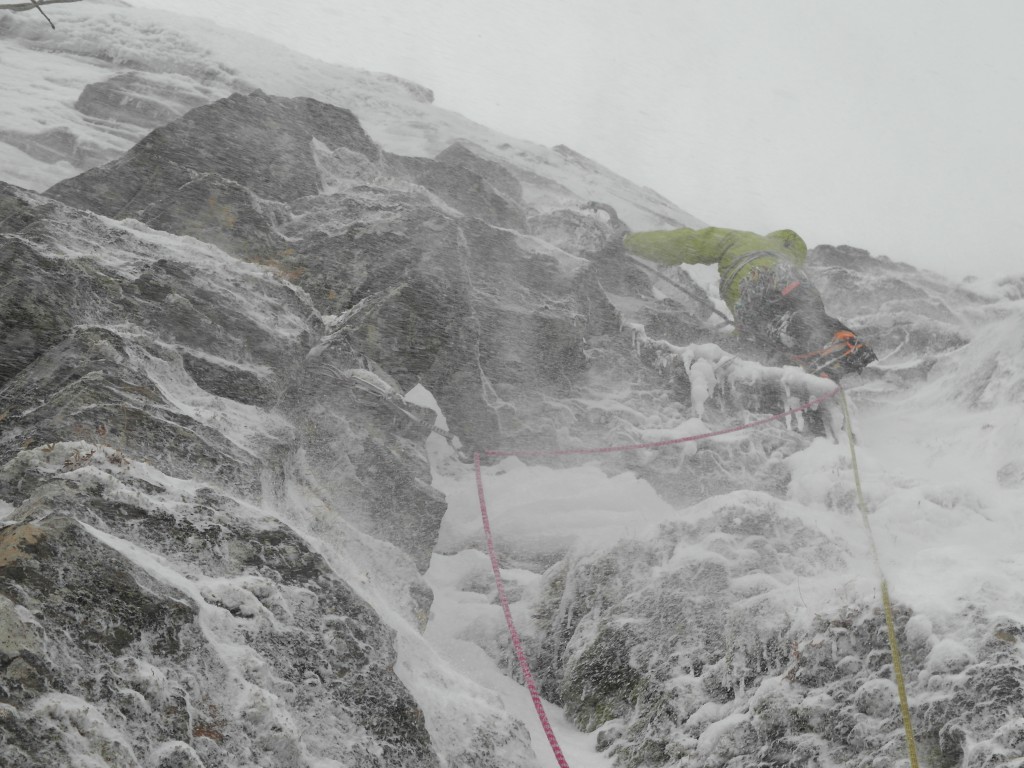 The line led into the middle of a steep blank Carn Dearg type of wall with a bit of the Black Ladders and Indicator Wall thrown into the melange to keep interest high. Turf and cracks and ice looked to be in abundance, and for as far as we could see (which wasn’t far). These little islands of hope gave us the right amount of encouragement to begin moving into the unknown. 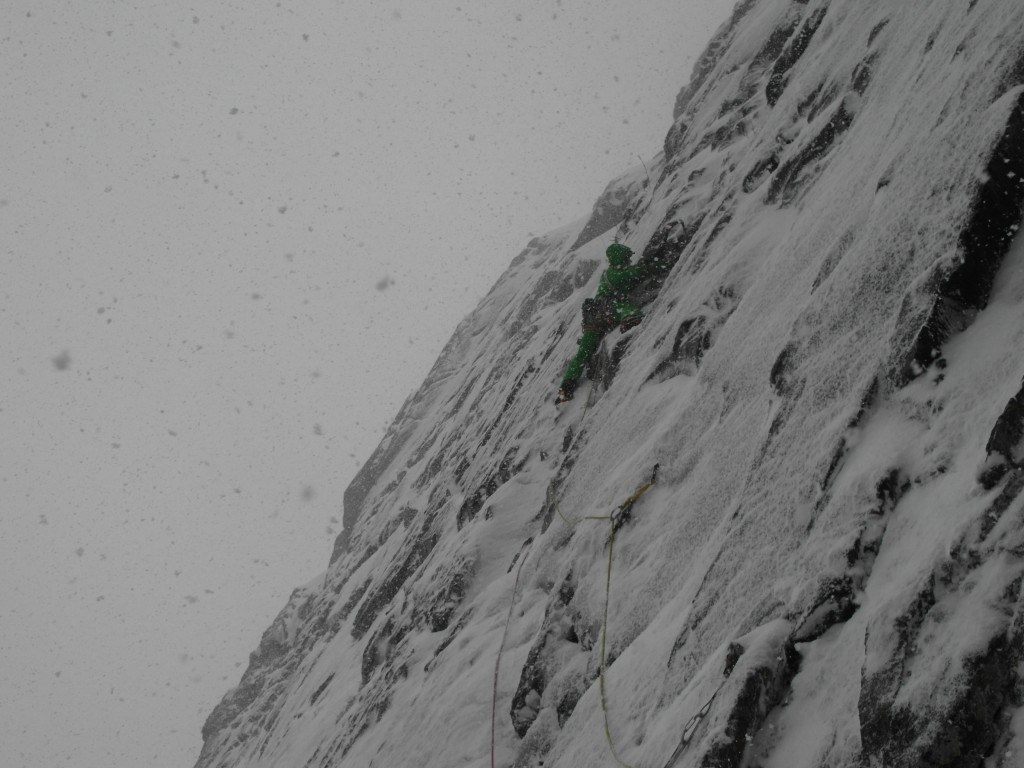 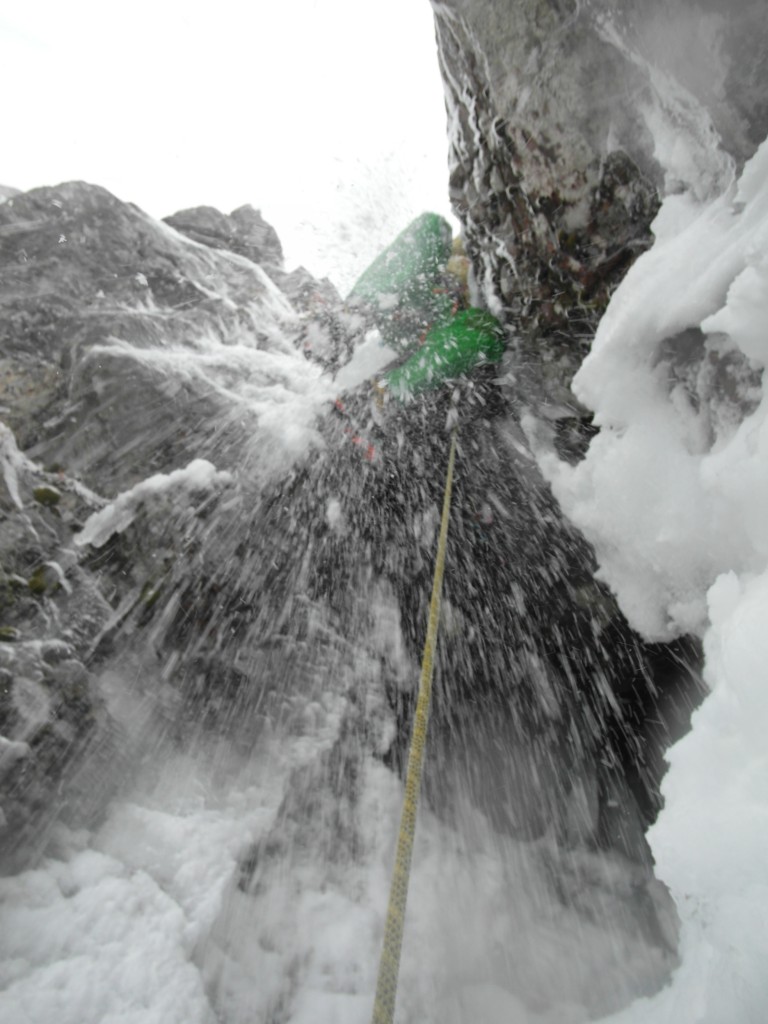 Several pitches later the three of us stood on the summit ridge of Vargerkalen, a new route bagged, an experience and adventure stored. The green sea smell wafted on the wind and the screaming call of seagulls pierced the imagination and felt out of place on this snowy ridge.

Its Friday morning, and as I sit in the apartment, the success of yesterday, the euphoria of a new route and an adventure feel good…

But… (There always has to be a but doesn’t there?)

This morning, keen to climb, the team mobilised and breakfasted, but wet snow and sleet is falling and the wind is blowing and the temperatures are well above freezing. I have opted not to climb. Andy, Pete and Lukasz have gone for a drive to look for tomorrow’s options. I sit looking out of the snow splattered window and numerous questions run through my mind;

Does being involved in a meet of very talented, driven alpinists and winter climbers, who have pushed and won on many occasions, bring about an unhealthy and dangerous feeling of competition?

Does having the opportunity to climb, for only a short time and in a seldom visited, wild environment, that also has numerous and unbelievable opportunity for new routes and adventure, bring about pressure to climb in questionable conditions ?

Does the euphoria you experience from success in questionable conditions make it worth the risk to repeatedly go out and force it?

And does the feeling of not being up-to-it, or being a lightweight when others have gone out to climb or insist that you should be climbing in these conditions, threaten to overwhelm and actually make you think that risking your life by going to have a go is an easier option than listening to those derogatory questioning voices that shout loud with every jibe or snide comment?

For me, it doesn’t. Although sometimes, I must admit, it is difficult to resist, and there will always be occasions when someone gets their climb on a day you decided it wasn’t worth the risk. So what! Make a decision and stand by it and be happy with it.

As winter climbers, alpinists, mountaineers, it is always a fine line between pulling one out of the bag and glorious success, to that feeling of you just didn’t try hard enough. Surround yourself with some of the best and most driven and it easy to be drawn into pushing too hard when conditions are questionable. I find given the right time, partner, objective, conditions, weather, rest, and motivation, anything feels possible and then it is well worth the risk.

The secret and the skill is to recognise that time and not be drawn into some pointless worthless filler-in just because you just happen to be there, and there is nothing better to do, or someone insists, or you are suffering FOMO (Fear of Missing Out).

Weaken to pressures and it will only be a matter of time before your time runs out and that filler-in climb will be your last.

One Response to Building Steam in the Sea of Snow