The Ups and Downs of Climbing in the Hinku. Kyashar Expedition 2011.

(Above is Kyashar and the South Pillar. Credit Andy Houseman.) 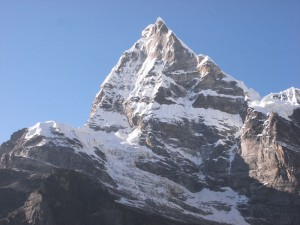 On the 6th of April, Andy Houseman and I fly from Heathrow to Kathmandu. After a couple of days in Kath, it’s the death flight into Lukla, followed by the steep walk over the Zatra La and down, and down, into the beautiful Hinku Valley. Day three of the walk-in will be through the pine forest and along the track running by the side of the deep flowing river until we reach the village of Kotte. On day four, we will arrive at our final destination, the small village of Tagnag. Tagnag is a few stone and wood and blue tin roof lodges perched above the sweeping river bed and boulder fields. The ice streaked north face of Mera overlooks the village and behind, Kusum Kanguru and Kyashar make the formidable boundary between the Hinku and the Khumbu.

Tagnag is my favourite place in the Hinku, although that is not saying much as I think the environment and the nature of the people in Hinku has been ruined by the hundreds of commercial expeditions, whom as far as I can see make large profits and put nothing back to off-set the environmental damage their expeditions cause. Also, due to the commercial trips prices are inflated to the point that in the future, small non-commercial trips will not be able to afford to visit the Hinku. The litter and waste management was also a major concern with none of the litter bins or waste management schemes of the Khumbu. 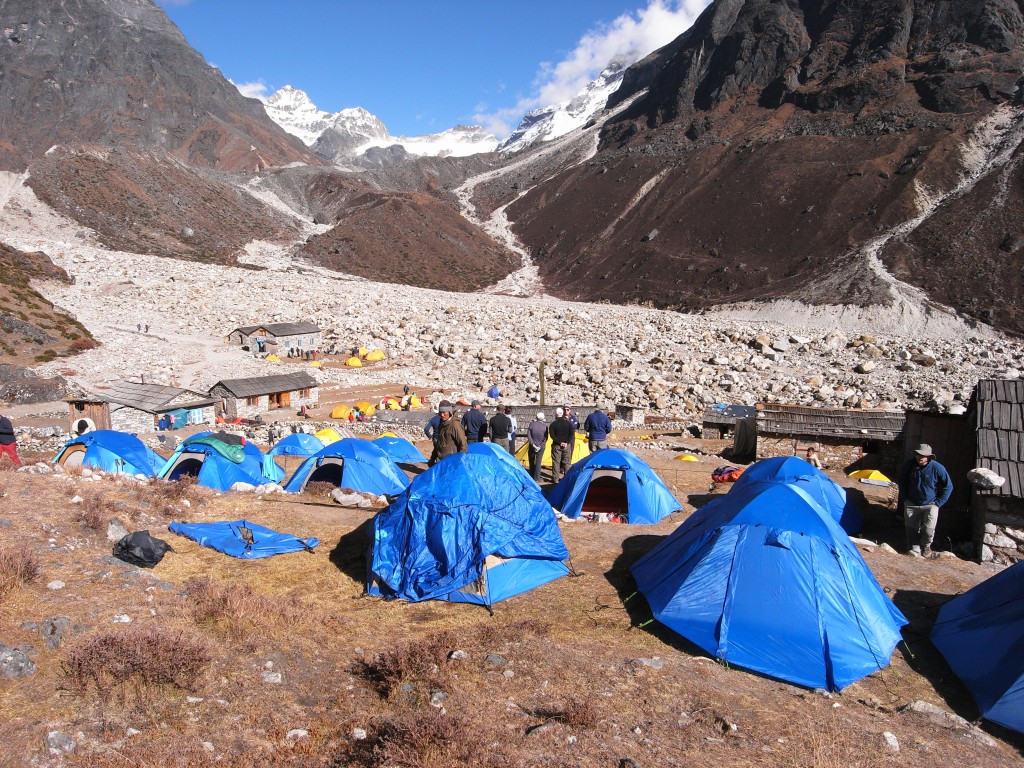 This will be the third time that Andy and I have been to the Hinku, although it will only be the second time together. On our previous visit we were attempting a new route on a mountain called Peak 41(6575m). Peak 41 is off the radar and away from the hundreds of folk being led to the crowded trekking peak Mera. As for many of my trips, we were doing it on the cheap, no BC support, no pre-arranged porters, no cook, no LO, just the two of us camped in a secluded moraine valley about 45 minutes’ walk from Khare, the final dismal stop for the poor souls that have paid over the odds for adventure and found cattle market mountaineering.

We had acclimatised, and were ready for our attempt on a never climbed, deep fault line on Peak 41, but first we decided to spend a few days down the valley in the relatively oxygen-rich luxury of Tagnag. After our two day sabbatical we returned to find the whole of our BC had been robbed. Game over and £10 000 worth of gear lighter. Immediately and miserable we began the walk-out.

On our return to Kathmandu, Andy left for Britain, but I stayed to sort out the red tape with the ministry of tourism. This was going to take a few days and while I waited I fired out a few emails. Amazingly, Dave Noddings, (Noddy) a rep at the time with DMM, replied to my e-mail suggesting he fly from Britain with a whole load of new gear and the two of us go back into the Hinku. Noddy’s experience in the big hills was a tad limited, he had climbed Point Five on Ben Nevis and bouldered-out a hefty V grade, but he promised to do his best. I thought hell, I’m here now, so why not. This second visit to the Hinku ended in me reaching approximately 300 metres beneath the summit on a solo attempt. Noddy, unfortunately, had found his first Himalayan experience a tad in his face, but considering I dragged him to high camp on Mera for an acclimatisation jaunt, and then ragged him up to the base of 41, which was a super technical approach and all in about 9 days since leaving North Wales, he did well and at the end of the trip enjoyed himself and the experience. 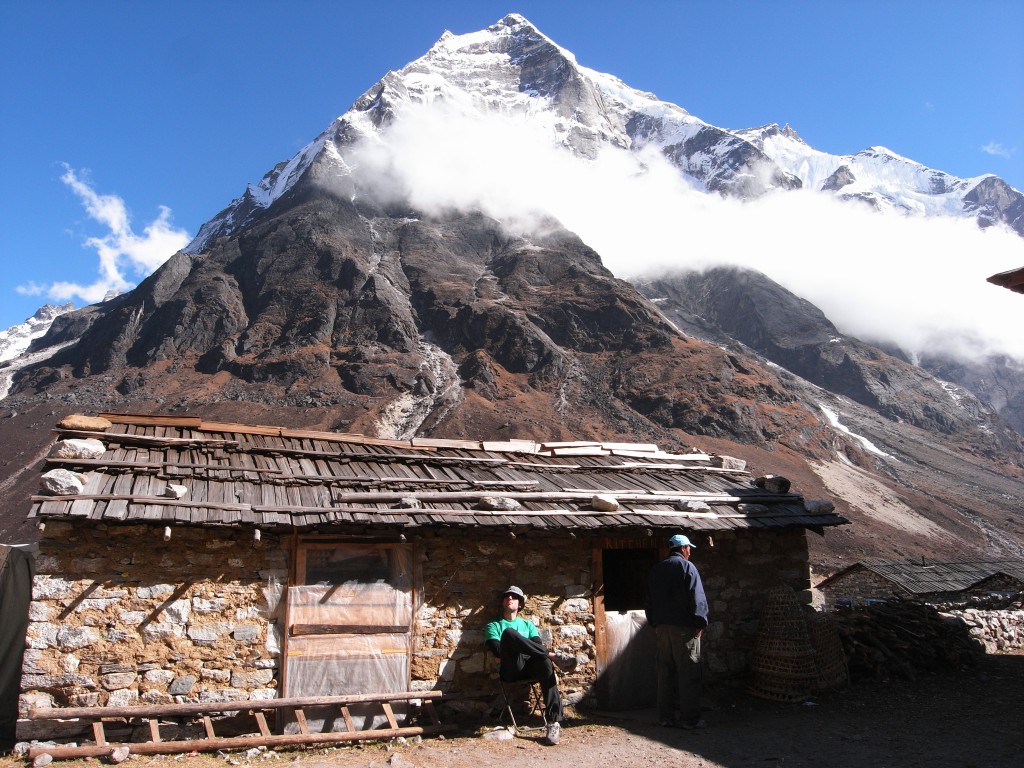 I spent a lot of time at Tagnag and for nearly all of that time, in between getting very disillusioned about the amount of commercial trips pushing up costs for individuals and small non-commercial expeditions, I was looking up at another mountain called Kyashar, (6770m) (aka Peak 43). And for all of that time I was thinking ‘why am I attempting 41, I should be trying Kyashar.

Kyashar has only had one ascent via its West Ridge in 2003 (Broderik/Frank/Normand). Since then it has received little attention apart from two attempts by the Czech’s (Doudlebsky/Holecek) on the South Pillar and a line by Doudlebsky and Holecek up the West Face which stopped on joining the West Ridge. You would think on a mountain so beautiful and accessible as Kyashar it would have seen more attention, but unfortunately, or fortunately, as the case may be for those with imagination, this is quite usual, as in this most stunning range of a million unclimbed lines, people appear happy to be dragged up a crowded peak and lie in tents surrounded by human excrement or they are content to jug fixed ropes on the same mountains as everyone else jugging fixed ropes.

Kyashar starts with a 1000 metre rock buttress virtually from the village of Tagnag and then, after climbing the rock and reaching a snow shoulder, the mountain steepens into a dramatic 1000 metre pillar of rock and ice finishing at the pointed summit. The thought of attempting this line is compulsive, and, as I sat on the dry grass in 2008, basking in the sun sitting outside the lodge, watching the groups come in and out, without questioning where all of their garbage was been dumped, (It’s behind the boulders on the moraine) I was already planning my return.

Houseman’s second visit to the Hinku was last year with Tony Stone; this was the same time as I was attempting Annapurna III. The two of them were going to try what I have come to affectionately know as my line. (youngsters nowadays have no respect for their elders!), but, they were stopped on the snow shoulder after climbing the 1000 metre rock buttress due to Tony having difficulties acclimatising. I offered my commiserations, but not for long 😉 and thought game on. Unfortunately for me, the game was on more than I was expecting, as Houseman, annoyed with failure, but buoyed by what he had already climbed, had my name on a spring grant permit before I had left Annapurna III BC. 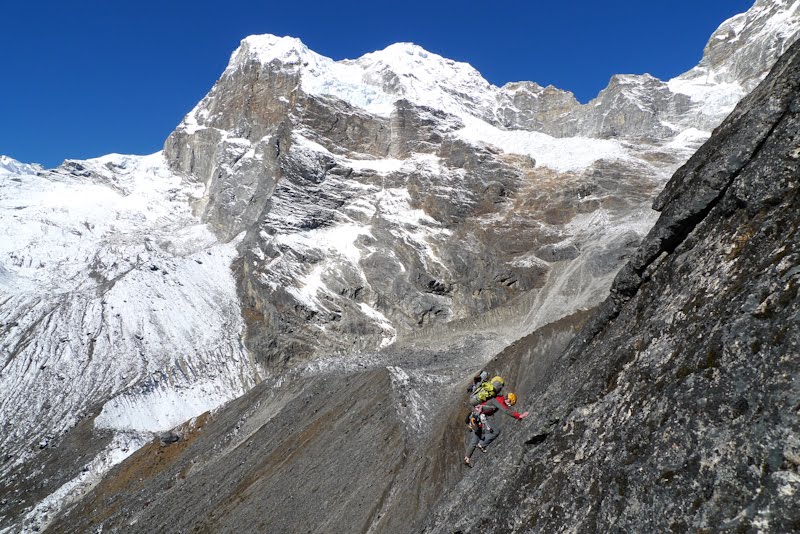 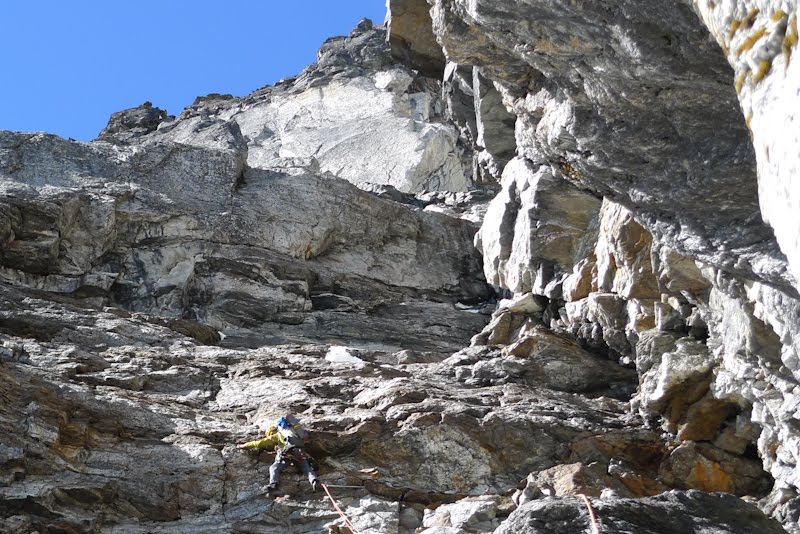 Usually I spend my winters near Chamonix, and I do no plastic pulling or training for rock at all. This winter was different, being in Britain I could visit the Beacon Climbing Centre in between climbs in Wales and Scotland and for the first time in several years actually come out of winter reasonably fit for rock. But in one sweep of the grant signing application pen, bang went all of my plans, goodbye BMC International Meet, goodbye Fairhead, and hello weakness. I know I will get very annoyed once again by the commercial destruction and over population and lack of support from the big companies to help maintain the beauty of the valley but how can I ignore this stunning mountain and this great line? 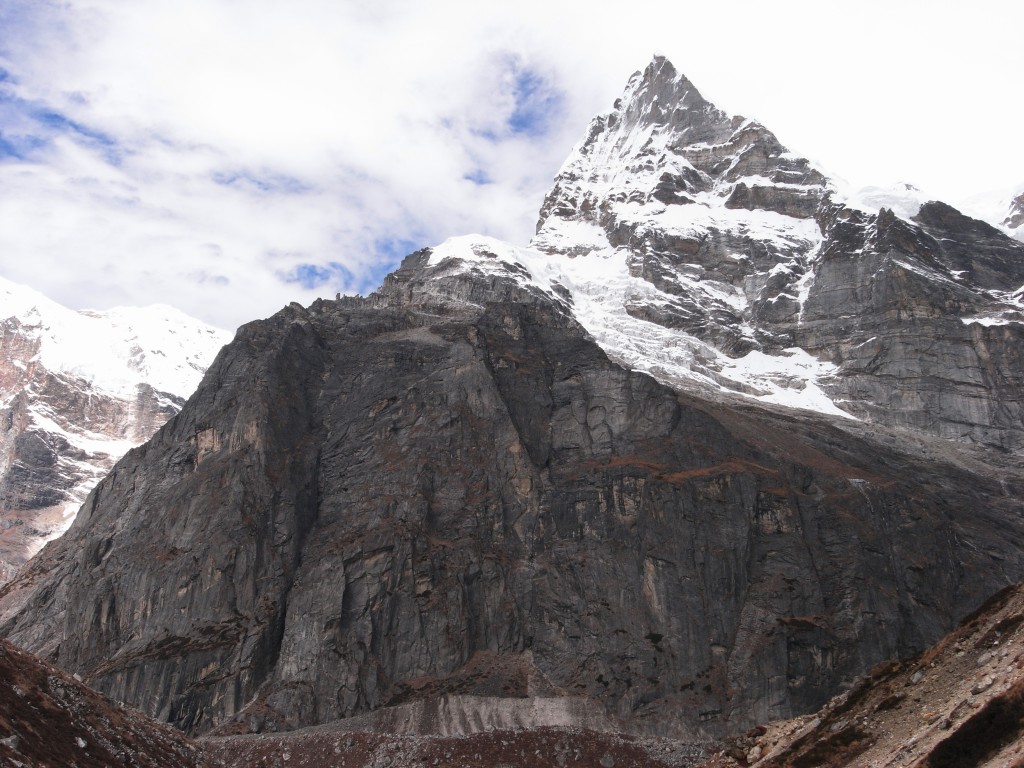 And after all, it is my line?

And thanks for the fianancial help to The Nick Estcourt Award.   http://www.nickestcourtaward.org/index.htm

4 Responses to The Ups and Downs of Climbing in the Hinku. Kyashar Expedition 2011.