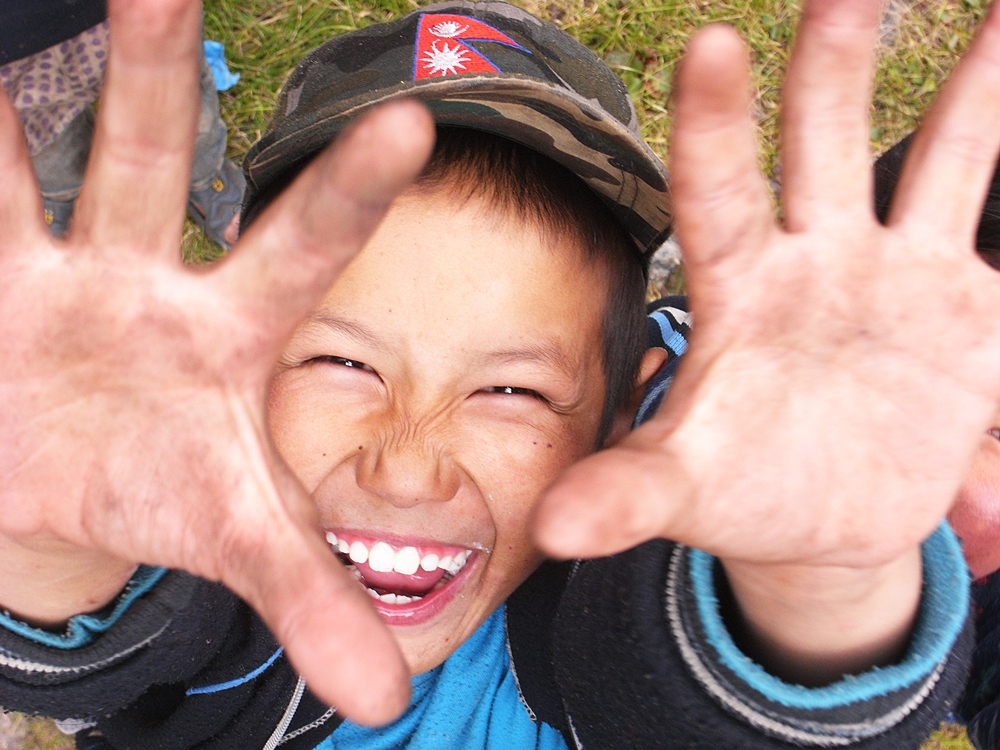 Between Thamel buildings, an early morning slice of sun reflects as shoals of silver. The smell of the night is heavy in the gutter. A woman squats. Fingers break the water’s surface. Drops flick from a blue bucket damping down dust.

A smear of blood on the pavement. The smell of stale piss. Sun-dried vomit. Rotting vegetables wrapped in see-through plastic.

The pavement supports a bundle of sleeping lads. Skinny chaffinch-legs and grass-stalk arms poke from this mound of rags, boys and stray dogs.

A mop of black matted hair, punk-spiky, belongs to one boy who is striking in a grubby, town-fox kind of way.  His eyes are brooding, bloodshot, old, young. This lad never begs. He plays, he fights, he sleeps, he forages for food – food often found rotting wrapped in see-through plastic.  He gets high. Breathing chemicals. In and out, inflating and deflating a toxic balloon. He hides, and then shows. 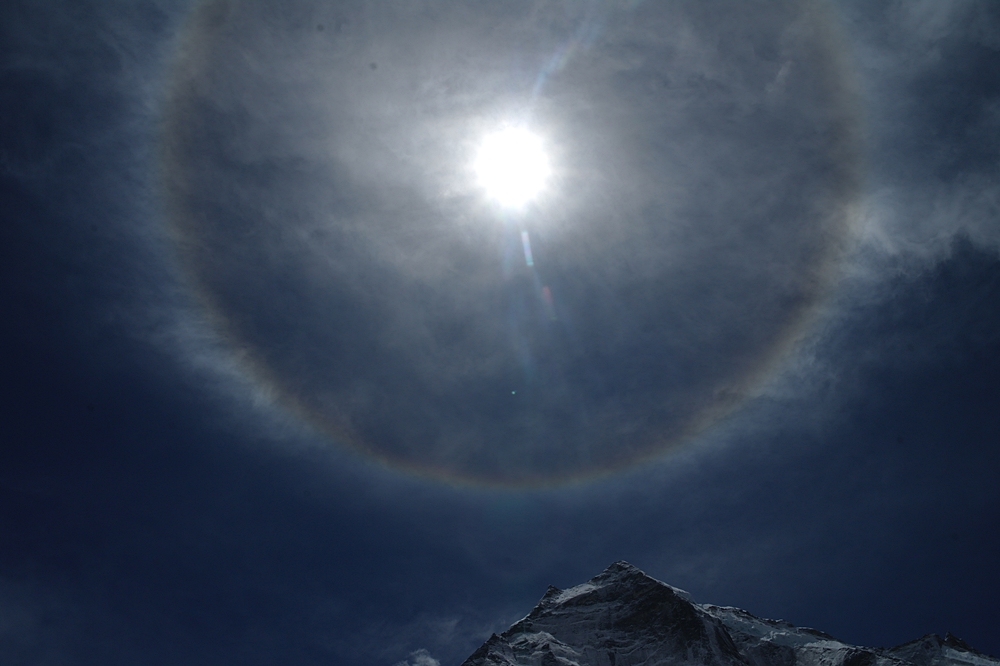 Returning to Kathmandu after failure on Kyashar is not easy. The ensuing questioning of my abilities, determination and drive always simmers inside me, and is especially strong in early morning. But the style of the climbing, be it successful or a failure, the style is the most important aspect. (Is it a failure if what you are searching for is experience and growth, not just a summit?) What a climber needs (or is that wants?) to ask is: why go in the first place; what have I received; are these the returns I was seeking; is my attempt worthy of those who have tried before; have I acquitted myself well; have I given the hill a chance; am I strong enough and grown up enough to accept the outcome, whatever it may be; is the style I have chosen worthy of the line; does climbing this line say something about me; am I appreciating an environment and landscape so few people experience?

The snow fell every afternoon on our attempt to climb Kyashar, and in the end the South Pillar, our objective, plastered white, was not an option. We turned to the West Ridge. A striking line, and only climbed once before, with the technical crux, a crumbling 150 metre rock pillar, in the lower half of the route.

Setting out at midnight from BC, the threatened approach was climbed without incident until we straddled the heavily snowed-up rock ridge between Kusum Kanguru and Kayashar at a height of 5800 metres. At 11 am we stood, looking up at the tottering pile of buttress which guarded the West ridge. The rock climbing was covered by snow and resembled an overhanging Scottish winter climb. There was a possibility of something easier, or at least, something more in keeping with the conditions around the corner.

Andy led a block of four pitches to by-pass the rock pillar, and in the end these pitches proved a lot more difficult than the original climb. Snow and hail poured down the face. Mist swirled. Drips of water thudded into clothing, falling from overhanging rock. The climbing proved to be tenuous and committing. There was no ice. The snow covering the rock was powder; there was not a single piece of névé anywhere. The rock was loose, so loose in-fact as to make the climbing some of the most insecure I have encountered, either in summer or winter. It was impossible to say whether the hook or torque you were pulling, (the final two pitches were vertical with overhanging steps, chimneys and cracks) was going to stay in place. At one point, leaning back onto a large person-sized spike of rock, I was horrified as it tumbled down the face leaving me tight on belay anchors. The ropes, fortunately, were still in one piece.

To say traversing out onto the West Face and looking into the deep cloud-filled valley of the Khumbu, kilometres away, felt secluded would surpass the most British of understatement. While Houseman led the final two pitches to the snowy West Ridge, I planned. I planned how to get us off this face without any person other than ourselves to help, or call, or even notice us. I planned… I planned for the time when Houseman ripped a block, which he surely would given the territory … and it would hit me, breaking or maiming. I planned for Houseman’s fall that would strip half a pitch, and I planned for the fridge-sized boulders that would follow his fall… After a while, stood belaying in the hail and the snow, I stopped planning.

Eight hours since traversing onto the West Face and nineteen hours since leaving BC , and with 1600 metres of vertical ascent into our lightweight quick-push, Houseman and I were eventually above the technical difficulties at approximately 5900 metres. At 7pm we dug into the deep snow beneath a boulder. We were travelling light remember: this was not a wear it down into submission, a pull up your porta-ledge home, slide down on fixed ropes to BC comfort kind of affair, not a climb made easy by technical advances, or local hired help to break trail. No, this was giving the hill a chance, pushing as hard as your body will allow and moving in the one direction … UP! At 7pm beneath the boulder, Houseman and I, having climbed free and with rucksacks were wasted.

The hill was winning.

But after a few hours of digging and eating: The moon’s sharp crescent gleamed, the plough’s stars flickered, and the silhouettes of the mountains surrounding our bivvy were crisp and jagged but comforting. I felt content … fortunate … privileged …

At 3am we woke, and by 5am we began the traverse to the West Ridge. Our one day of food had been eaten. All that remained were a few gels and bars. As I waded through thigh deep snow I knew to plunge an unbroken line to the summit of Kyashar was not going to happen.

Our stall at the start had been set; we would carry on our backs what we needed for a two-day ascent and descent of this 6770 metre mountain, but we knew we taking a gamble on the snow being firm, which would make our passage quick. But the snow was anything but firm and it would’ve taken another two days at least to climb and return. And so, in the end, the decision was taken  to abseil the rock rib.  Retracing our steps beneath the South Face, we reached BC at 1pm, thirty seven hours from the start, with three thousand two hundred metres covered.

The street boys in Kathmandu lay baking on the pavement. As I walked in the afternoon sun, I thought about our climb, about our style of ascent … and what it all means … 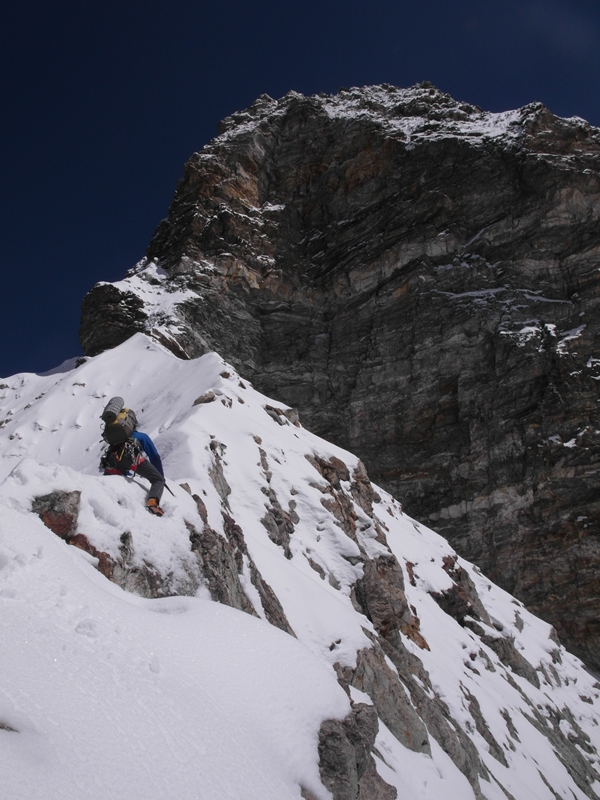 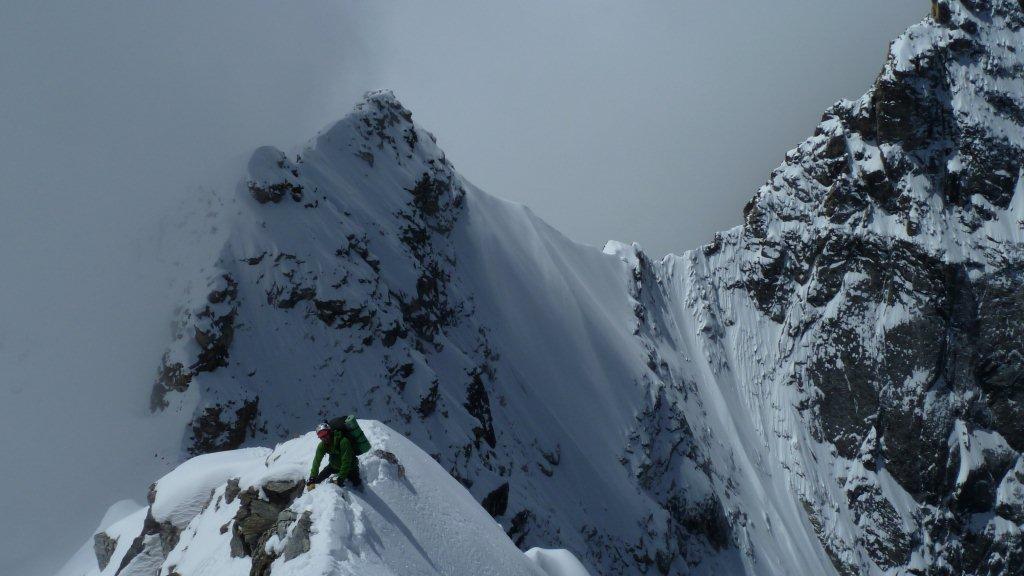 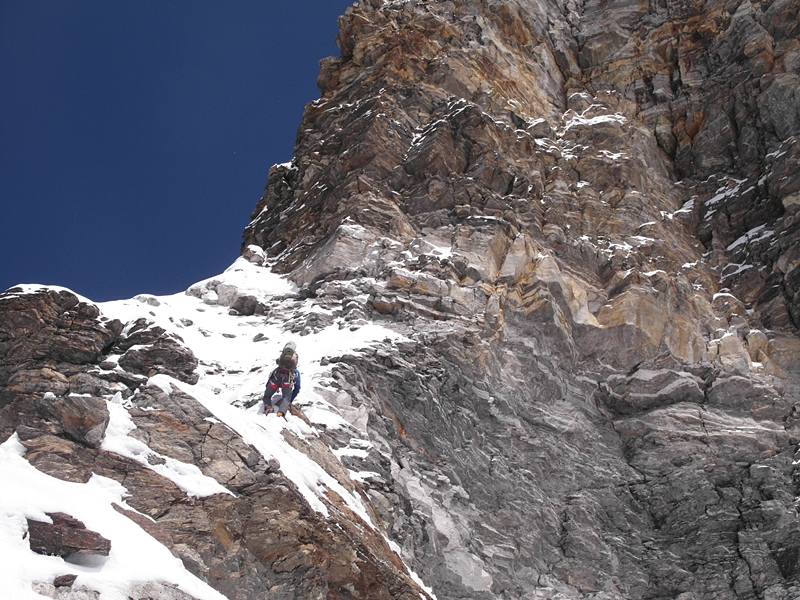 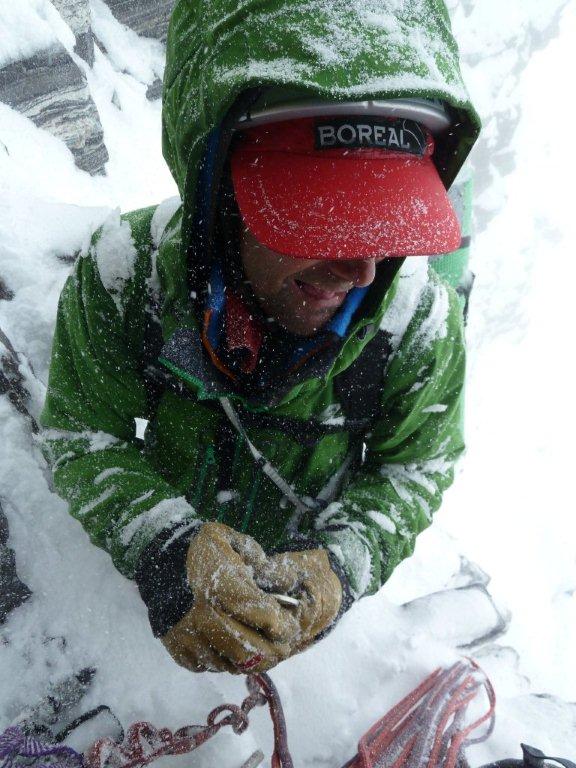 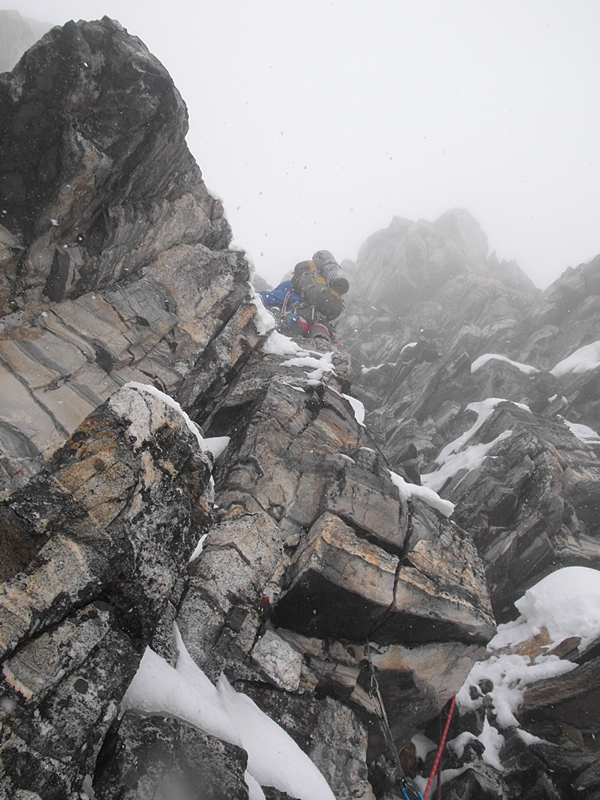 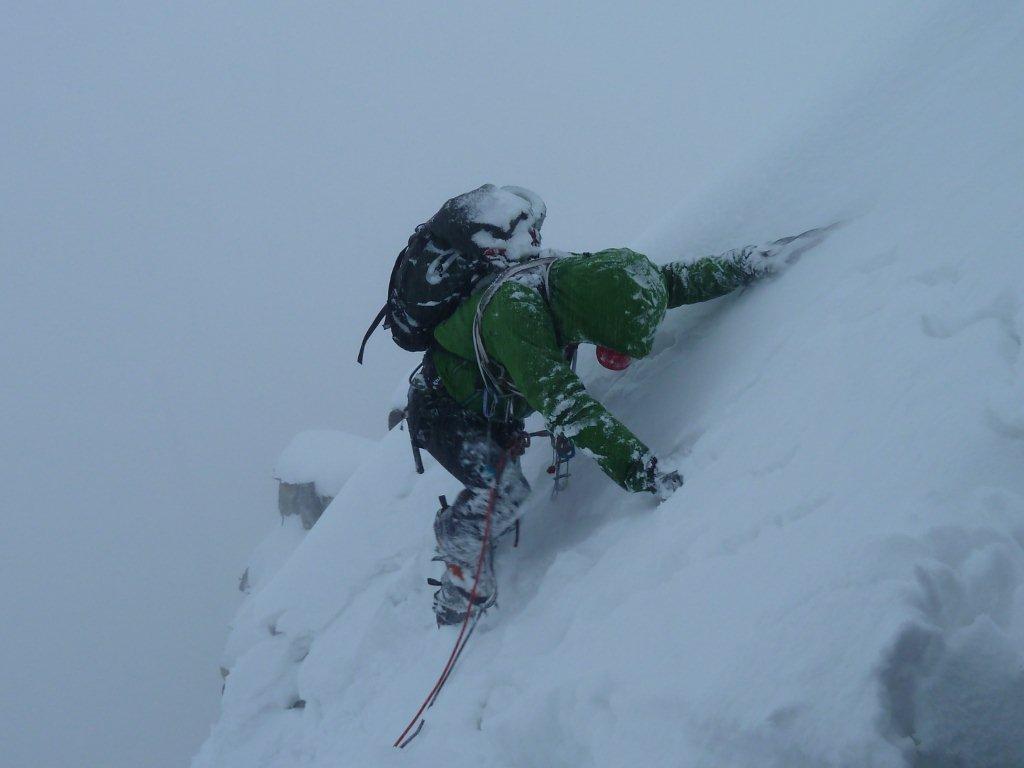 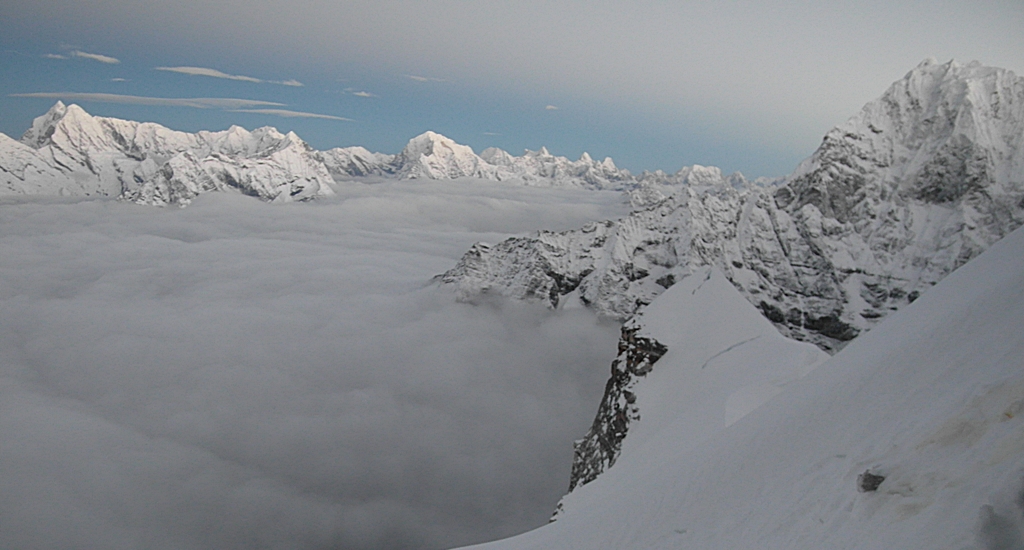 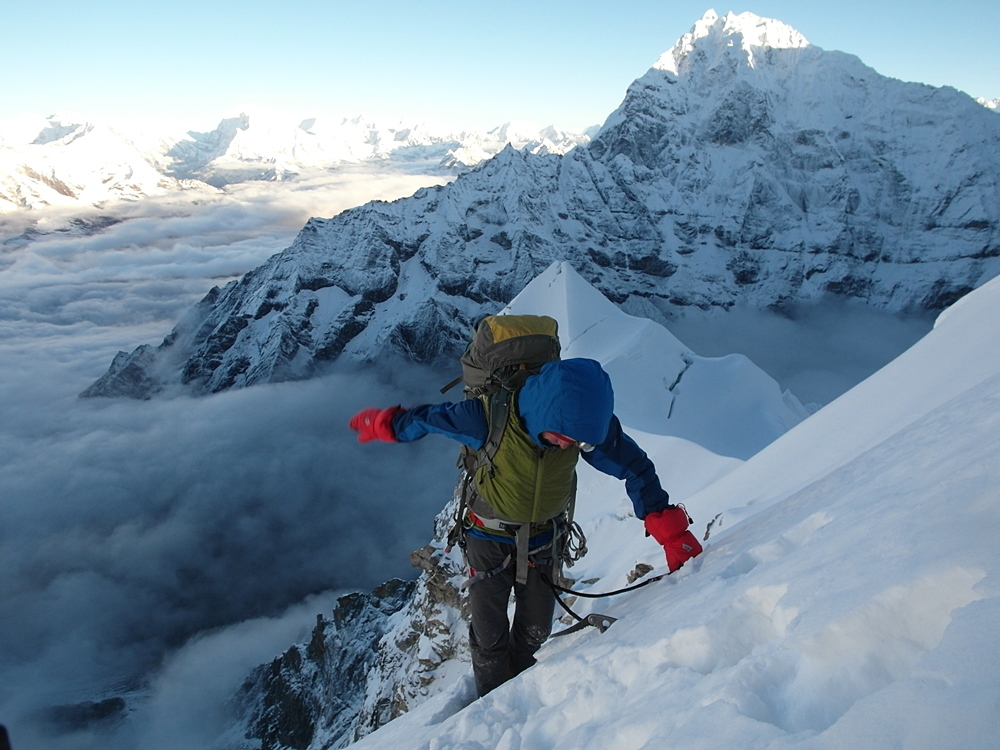 (Below is a link to two short clips of film of Andy Houseman and me climbing some of the more interesting pitches on Kyashar.)

Kyashar West Ridge variation. One of the more tricky pitches. from nick bullock on Vimeo.

Kyashar Expedition 2011. The lovely ridge between Kusum Kanguru and Kyashar. from nick bullock on Vimeo.

[Over the past couple of years, having passed through Kathmandu a number of times, I’ve been, on and off, working on the prose-poem at the start of this post, which has had various titles, and which still probably remains as an unfinished draft.]

Thanks to Mark Goodwin. Friend, teacher, poet and at times a bloody pain in the arse 😉