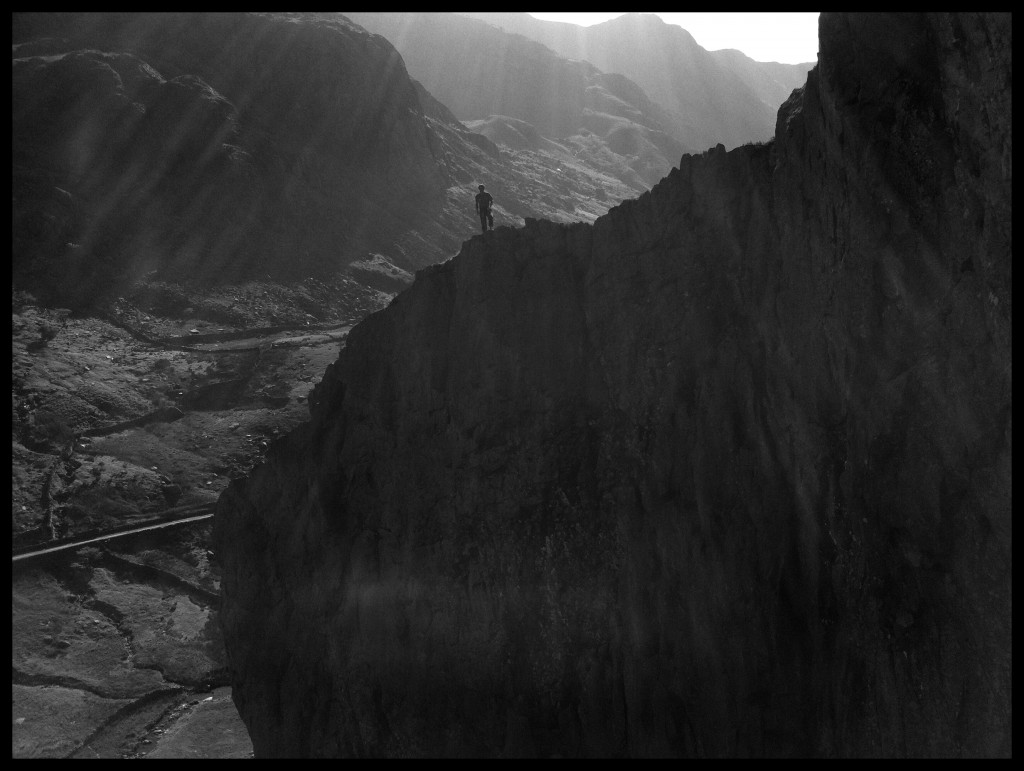 Scimitar Ridge, is a wave of corrugated cardboard  cut-out from the heather-hillside high on the northside of the Llanberis Pass. Scimitar is for me, THE chosen venue.

The wind often cuts through the scree beneath Scimitar’s dagger-overhangs. The sun shines in the morning, shadow fingers delve deep into the cool dark corners of the Rhyolite-fold, but then, as the sun moves down the Pass, the shade generally gives sharp fresh temperatures in which to climb. Ash tree’s spindle limbs waver in the breeze. Sheep wander the steep hill and grind grass between brown molars. A small trickle of fresh water drips from the rock step green with algae. Ticks scuttle and midges, when the wind drops, bite annoyingly. Shaking legs, pumped forearms, frayed nerves, eyes on stalks… The Ridge gives.

Returning from an expedition leaves muscle weak and nerves shaky, but the enthusiasm to get strong and fit and then launch into hard run-out sequence is just too tempting for someone who places the psychological way above the physical.

And so the question, how to get into a strong head-space quickly, this for me is the most important question as every summer my time is limited by going on expedition.

There are a few climbs on Scimitar that I will never be good enough to climb on-sight, or even ground-up, so for me the best way to go about ticking these brilliant climbs, and in the journey to doing this, to get into a strong head-space, is to work them, and then lead them. Sport climbing will certainly get my arms fit for pulling but what it does not do is get my head strong… In fact, in my opinion, sport climbing actually weakens the mind if the intended path is for on-sight, run-out trad on suspect rock.

And so, back to Scimitar Ridge, the best and most neglected crag in the Llanberis Pass…

“Jonny, can we top-rope your climb please?” Was how it all started two years ago after I had lead Romany Soup with the usual suspects, Streaky and Tim Neill. Jonny Dawes was also on the ridge that day, the first ascensionist of the 39 Slaps, (the climb we wanted to top-rope). “Yes, certainly.” came the reply.  “I’m chuffed you want to try my route… in fact, do you mind if I join you?”

Jonny climbed The 39 Slaps way back when, and in doing so placed five pegs to protect it. (The rock on Scimitar is very compact.) And he enthused about wanting to make something that people would want to climb, something safe and fun… I’m not sure he succeeded though as all of the pegs he had placed were sawn-off.

A very pleasant afternoon/evening followed with much slapping and frivolity and banter. The most vivid memory I have from that afternoon/eve, was watching Jonny climb his own route, with that very quirky-jerky-slappy natural style that he has made his own. The second recollection from the evening was everyone going quiet and then heckling as I, much to every-one’s surprise and disappointment (on a top-rope of course) proceeded to do quite well on my first go.

The 39 slaps was just about everything I want from a route. It had style, technicalities, power, grace, and burl… Throw in uncertainty of rock, a stomach churning mistrust of the in-situ protection, which if you have limited imagination you can fool yourself the pegs are good and hey presto, the perfect get fit route… I led The 39 slaps later that summer with The Pimp, aka, Ian Hey belaying and The Hobbit aka, Jonny Ratcliffe and Andy Scott watching. Eventually, later in that summer, this ascent gave me the courage to ground-up the climb I was aiming, a Paul Pritchard scary classic called Surgical Lust. Job done. Theory proven.

Two years down the line and here I am again needing a get fit, get into a strong head-space climb…

Throwing a rope down Adam Wainright’s climb, The Trumpet Blowers, didn’t give me the work-out I wanted, I couldn’t touch the crux sequence… ‘Bugger’! But then I remembered the Trumpet Slappers, a combo of the 39 Slaps and the Trumpet Blowers… ‘Climb a brilliant climb I’ve done before and then extend it into a brilliant climb above the hard bit I haven’t done before… Perfect’. And to top it all, The Trumpet Slappers is a Jack Geldard route so that would mean it was a soft touch. (Sorry Jack, I couldn’t resist ;-)) (Side-note; I did talk to Adam about the Trumpet Blowers and his response was quality, “Yes, that will certainly get you fit, it’s a boulder problem in the sky”! Which I then had to tell him that actually as I’m pathetic at bouldering it wouldn’t get me fit as it was too hard for me to even work.) (Note to myself, get stronger and lighter).

And so, two days ago, the getting fit, getting into a strong head space project for summer 2011 finally culminated in me climbing the second ascent of The Trumpet Slappers, ‘let’s give the weak boy a cigar!’ What a brilliant route, well done Jonny, well Done Adam, well done Jack. And thanks to The Hobbit for the belay and to Ray Wood for filming the action. Hopefully Ray filmed it with the camera the right way, unlike the Hobbit, who unbeknown to me filmed my original ascent of the 39 Slaps on his phone holding it the wrong way!

The Trumpet slappers is a super sustained E76c burl which climbs all of the hard stuff on the 39 Slaps before moving left and finishing up the final section of the Trumpet Blowers. Jack Geldard thought a French grade would be 7c, I’m not sure about that, but it is sustained, especially for the weak, e.g. me. There is no rest on the whole route, not in the lower section, the middle or the upper… especially the upper, where actually, if there was a rest to shake out and contemplate how far you are going to fall onto the top peg of the 39 Slaps should you muff the crux move, this would possibly not be conducive of successfully completing the climb. The big spike of rock which points the way up the route from the base was mentioned regularly by the crew who shared my slapping obsession and I do recall having dreams or should I say nightmares of falling and receiving a forceful Rhyolite enema.

Even though I worked the route, personally I don’t think this makes it a formality to lead as the monster lob potential from way out left of the peg should the sky hook blow is not good for an active imagination. But for anyone out there that thinks they can do better, I’m more than willing to hold your ropes and place an outsized surgical rubber glove on that prominent and prostrate, tear-inducing finger spike!

And in my, let’s get into a strong head space plan; several others who have joined me have now got the slapping bug… Only time will tell to see if they can convert the physical into the mental and lead the climb! 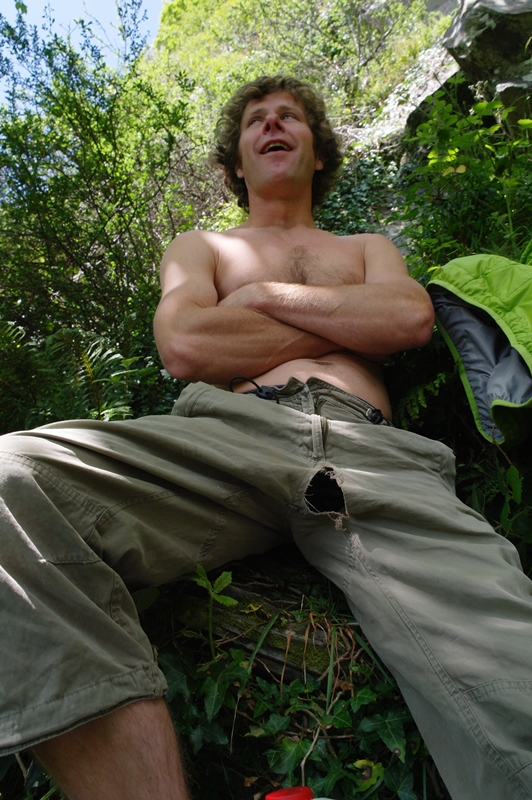 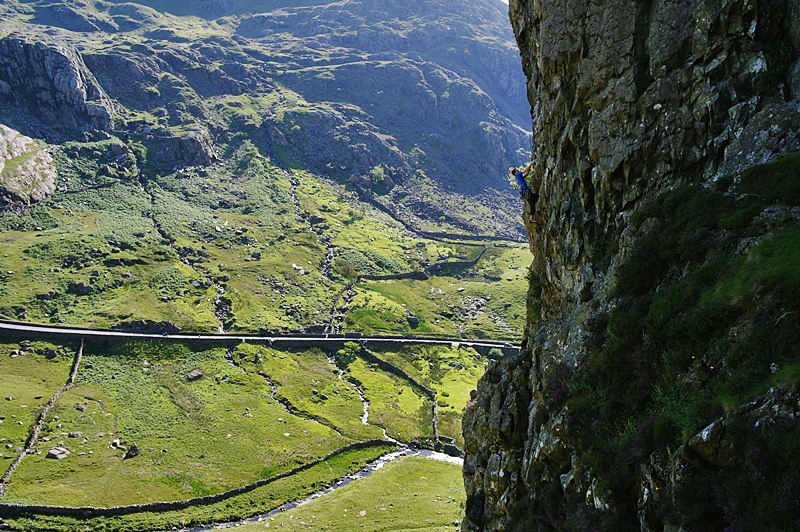