The Man in Black Points the Way to The Lost Pillar of Scheiser. 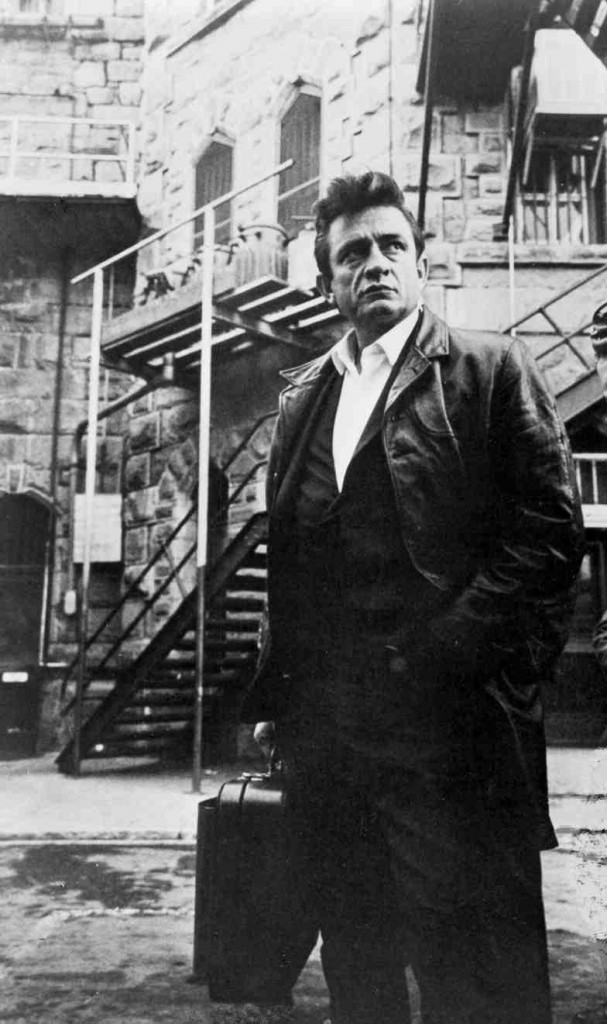 On the car stereo, boom-chikka-boom, Johnny Cash sang in his freight train bass about his burning ring of fire, but there was certainly no ring of fire this Saturday morning in Wales. And as we crossed from the mainland to the Island of Anglesey, the Menai Straights slewed swollen green turbulent beneath Stevenson’s stone bridge. Rain slapped the car windscreen. The Hippy and I were on a mission to Rhoscolyn, hopes high that dry rock could be found.

Pulling-up in-front of the solidly built Rhoscolyn church we packed bags, but just as the lid shut tight, the rain, a cloud of drizzly wind-blown schmee, buffeted in on a westerly.

Earlier that morning, before setting off, an impromptu gathering at the hippy’s place found four of us, Hippy, Geordie Gary, Dave Simpson and I drinking coffee. “I paddled past an interesting looking zawn, somewhat reminiscent of Mousetrap Zawn the other day Nick, just your kind of thing I reckon.” Dave said.

“Where was that then?”

It turned out that this mini Mousetrap was on the north coast of Anglesey and had one established route which was a route called The Lost Pillar of Scheiser. Now call me quirky and weird, but this was actually a route I knew about. To this day, I can’t remember what had originally drawn me to this climb, but words like decomposing, rotting-quartz-vein, George Smith and XS were all words that had been used and these are words I find appealing.

Though, only just warmed up for summer, and still in the month of July, a month too early for choss shuffling as the bird bans don’t come off until August, the Hippy and I decided to ‘Go have a look.’

It was raining quite heavy now, so this was definitely only going to be a look, even though bird bans were not applicable to the north coast and the Hippy had a glint in his, let’s be mellow-man, eyes. With anything but ‘mellow man driving, the Hippy took us in his usual, somewhat aggressive and erratic style, navigating and swerving the grass growing in the middle of the single-track lanes. I was ready to barf, but within about the same time it took the man in black to sing A Boy Named Sue and the Folsom Prison Blues we were there.

The waves crashed, gulls screamed and the sun shone as we walked down the short, sheep nuzzled grass, of the headland.  Scrambling kelp covered rock and timing the scuttle between waves, we stopped beneath an overhanging tottering quartz pillar that cut the only semi-solid path through guano and mud and sand. Behind, a sea arch and a pebble beach would have made this an idyllic spot but I was starting to sense enthusiasm sprouting from beneath thinning hair held in place by a red bandanna. Sitting on a rock wanting to chunder, the tune, Don’t bring your guns to town weaselled its way into my sub-conscious.

Travel sickness is a sod. Once I start to feel nauseous, lethargy, tiredness and general unwillingness to do anything consume, so for once I was happy just to look around and chill, but I could sense trouble on the horizon. ‘Well, bugger that, the Hippy could take on this overhanging tottering pile if he must and I for once would take the soft option of the second.’

“Shall we do it then?” I asked with trepidation not wanting to sound like a lightweight and hoping the Hippy would see sense.

“We might as well as we are here.” Red bandanna enthusiasm spurted knowing he had a get out clause.

“Who’s going to do it then?” Big trepidation knowing I didn’t have a get out clause.

“I’ll give it a go.” Big red bandanna enthusiasm with a touch of blissful ignorance.

Try as much as I could the feeling of doubt wriggled from the back of my mind and reared its ugly slimy head until a line from Who Killed Bambi, a  Sex Pistols song came to mind…’Never trust a hippy’. Ropes were laid out on the big flat boulder beneath this pillar of uncertainty, and all I could envisage was the Hippy getting a little way up, filling the climb full of my gear and then deciding it wasn’t for him leaving me, in my delicate state of barfdom, to take on the choss.

Shaking my head clear of this pessimistic scenario, I settled in for a relaxing belay. The hippy said a prayer and pootled off … five feet high and rising and quite nonchalantly he walked the line pulling his white jeaned, red bandanna form upward. ‘My, what bravery, what bottle … what foolishness.’ A foothold snapped leaving him hanging from one arm but still he continued in the direction of doom … “Great, keep going Hippy.” ‘Amazing’, I thought, this is actually going to happen. For once I was on the sensible end of the rope while the nutter above skittered and pulled lumps and looked at ground fall while exploding gear ricocheting all around… ‘So this is what it’s like?’ 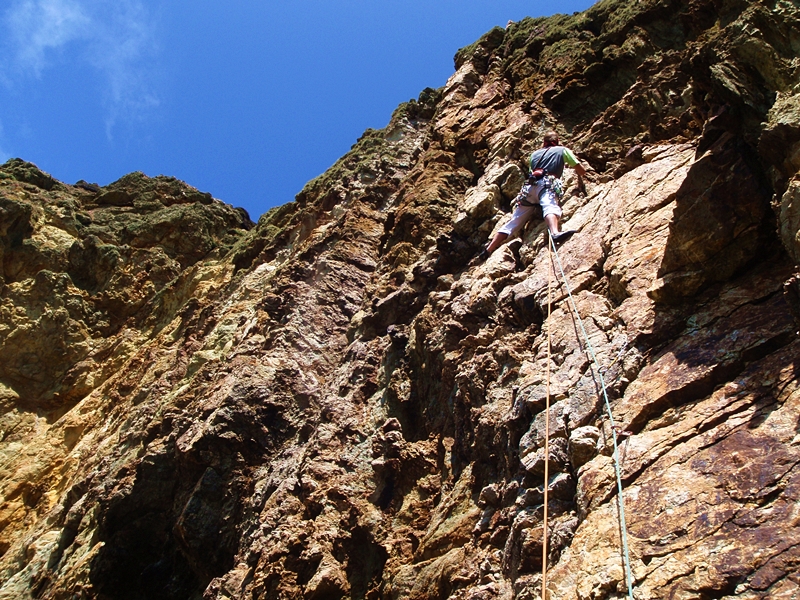 Another pull, another pull, a lump flew, a foot skittered, and then it happened… For the first time since starting on this teetering journey of quartz uncertainty, the Hippy started to thump the rock to test, and for the first time he came out from his summer of love bubble and realised that the whole pillar was detached and hollow… “Shit, that hold I just banged above my head caused the rock I’m stood on to vibrate!” At this point I would have offered the usual and immortal words of encouragement, SCS, (work it out for yourself children!) but still feeling like I was going to barf and not feeling mentally prepared to take on this horror, I offered kind words of encouragement, the words your belayer often offers when they don’t want to try… “Go on Hippy, you’re doing great, keep it going, I’m with you all the way.” Which I wasn’t of course and I didn’t really care if he was doing well or not, or even if he landed in a bloody twisted mess of cheesecloth at my feet, I just didn’t want him to realise his mistake and back off.

And with that the wan*#r reversed and lowered off… 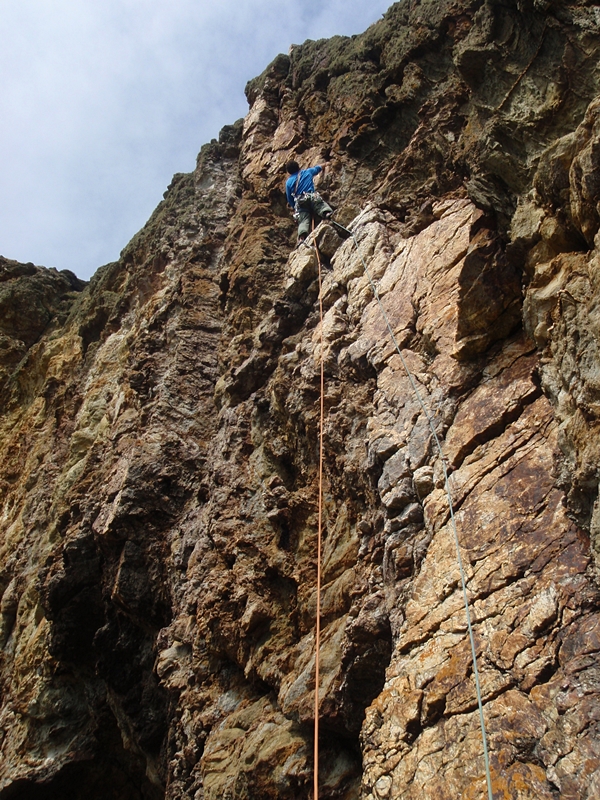 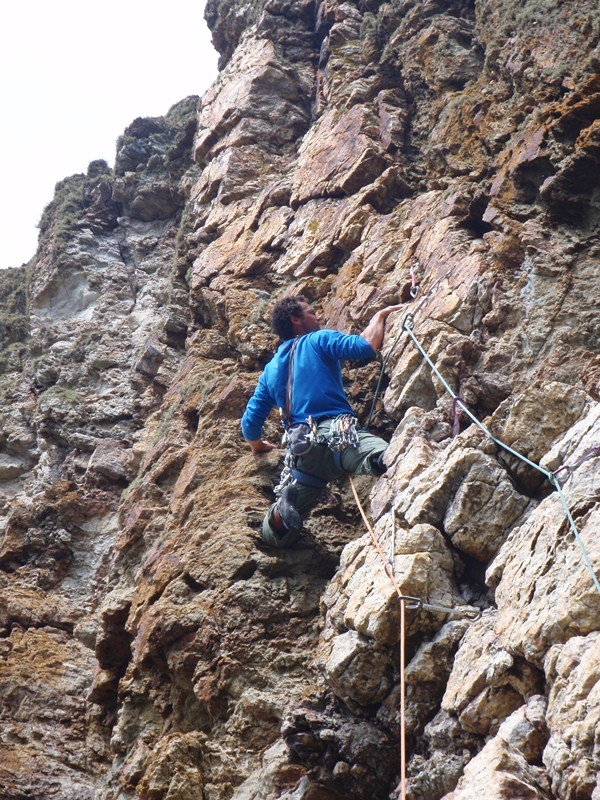 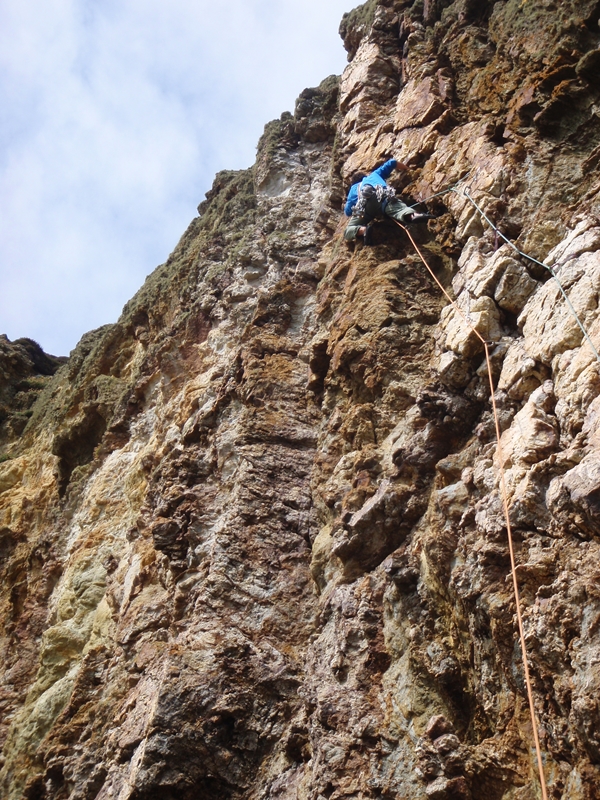 2 Responses to The Man in Black Points the Way to The Lost Pillar of Scheiser.