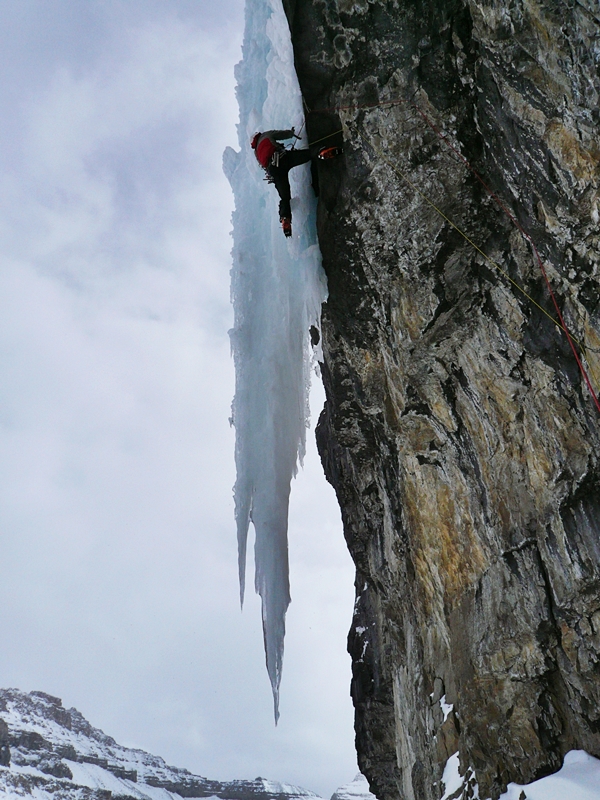 After the brief Indian summer a week ago, October in Wales is damp novelty. Novelty… because this is the first autumn in a long time I haven’t been on an expedition. Writing a book and putting together a powerpoint presentation for Kendal Film Festival takes time, so much time, so not being away on expedition is a bonus, that’s what I tell myself anyway. Although not being away and sitting in front of a computer while friends are in Nepal and the Alps is a tad frustrating, but running and the odd day of rock climbing and training at the Beacon Climbing Centre and dry tooling at White Goods between tapping the keys and inserting slides keeps me sane. The thought of actually being fit coming into winter instead of the worn out wreck that usually returns from the Himalayas is a nice thought also.

As the winter approaches and the word count increases, being in front of the screen also increases my determination. The plan for the winter is a good one, Wales and Scotland and the Alps for December/January including the BMC Scottish International meet as long as I pass the requirements needed to be involved! Not too sure about one of the questions on the form I filled to be considered for a host, the question asked something along the lines of, can you navigate… !

Early February will be Scotland and mid to late Feb is hopefully into the far north of Norway with Andy Turner to try a new route.

March is a three or four week trip to Canada… and hopefully a few seldom climbed big mixed lines.

On the Canada trip I’m going with super keen loud young youth Rob Greenwood, and I sent him a few links with picks of a few things I would like to try http://whitespider.net/climbs.html … he texted me later to say he needed to pull over into a layby, he was so excited. Unfortunately by the third email he had passed the layby and the van was a mess and by the fourth and fifth he was exhausted and out of tissue. Youngsters really need to learn control! Here’s to Rob breaking a trail to Patterson, The Ghost and The Stanley Headwall.

Talking about keen young loud youth, he dragged me away from the computer last weekend… or was it the weekend before? I’m not sure, they all merge into Times New Roman, CASTELLA, or AR BLANCA. But away from the computer I was dragged and the steep hill up to the Cromlech we went. Rob wanted to climb Lord of the Flies. Arriving at the crag in the Indian summer, hot and slathering, we were shocked to find the crag awash with people. “What do you want to do?” We were asked as slippery sliding up the polished step to reach the ledge beneath Cenotaph. “Left Wall and Lord.” “Oh, that’s OK then.”

Anyway, to cut a story of biblical length into just novel size, we geared up and as we did, one chap let go from the start of Right Wall hitting the belay ledge a mighty thump. A body staggered around from Ivy Sepulchre covered in blood and the leader of the team now on Left Wall turned it into A2… For the first time in my life while rock climbing I felt unsettled, I had to sit down before someone knocked me off the ledge and I wasn’t even going to lead Lord! Keen Loud Young Youth, unperturbed by the mayhem got on and continued regardless, thrusting his way up the climb with confidence, well, until he had the finishing holds grasped tight in his sweaty mitts somewhere near the very tippy top and then, oh no, he decided to let go… Doh! I, full of sympathy called him a wa*#er, which, considering his layby antics from above, he obviously is … but it would have been out of place to have actually climbed something on the crag that day, so we ran away and returned on Sunday for a smooth ascent and no blood, no aid, no air… Hmm, well I say no air but that’s not true is it Andy 😉