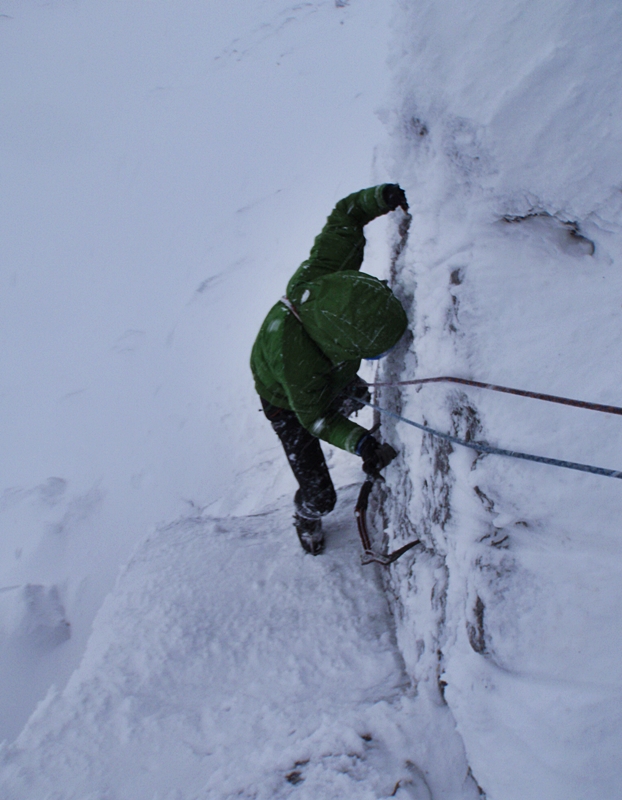 Tower Ridge, a slim snowy finger pointing toward the CIC Hut was on our left and on the right, the short and beefy Observatory Ridge, encrust in ice and snow, hemmed us. The snow, perfect powder in which to ski, lapped around my knees.  Dougal behind, separated by a distance we thought would make a difference should the slope go, followed. On occasion I stopped and turned to watch Tavener’s decent and in turn, on occasion, he stopped to watch me. The slope, fortunately behaved, and when it was safe, we joined together and revelled in how amazing it would be to have a set of skis.

Observatory Gully was loaded, but it hadn’t stopped us reaching and attempting a second new route on the east flank of Tower Ridge, but the route had not succumbed on the first, second or even the third go. I played out the moves with each plunging step – slotting a fist jam into the back of the overhanging off-width, breathing deep and allowing gravity to swing my body out into space before placing a front-point to a small edge – releasing the axe below the overhang – slotting it into a constriction in the crack above, and all done with baited breath. Shake-out, relax, de-stress, de-pump… and then go to battle. The crack was wide at the base and the steepness pushed. A very poor pick placement, a savage pull, slot a leg into the crack, another ice-hand-jam… pumped, fighting, slipping… And I’m flying. Time to run away.

The next day we drove from Roy Bridge to the Carngorms in blizzard following snow furrows. Fairy lights, wrapped around fir trees for Christmas lined the road through Newtonmore. They flickered a blurry red-blue-green through my iced up windscreen, through my sleep deprived cornea.

During the walk-in, into The Lochain, the snow pushed by the strong wind didn’t particularly make me feel at ease with our choice of route which was Daddy Longlegs, a hard and technical climb. And the slightly whiter than white conditions on reaching the crag made us opt for something less taxing, but Ventricle, the climb we chose, was still going to be challenge enough.

Dougal climbed the same steep start from our climb Ventriloquist a few days before but this time he continued to traverse to the right. “Is it above or below this block?” “I’m sure it’s below, that’s what Pete said the other day anyway.” The Pete in question was Pete Benson, knower of everything Scottish, or so I thought until Ventriloquist when I asked him where to go and he said up!

Dougal continued, moving a lot more free and confidently than he had the last time we were here, torqueing an axe pick and straddling the void before finding poor pick placements from which to pull. “Where now?”  “I’ve no idea, just keep climbing where ever it looks like you should climb.” I was obviously learning a thing or two about Scottish winter climbing from Pete. “I think it just follows the groove to the right.” The trouble was neither of us had a guidebook and all I could remember was the line the summer route took was the obvious diagonal fault.

Hanging off a pick wedged into a crack Dougal threw a leg out onto a steep slab to the right before heaving his short, stocky frame directly up. And up again he pulled, both feet were now pressed against the smooth rock. He matched hands onto the same axe and up again … his foot pressed against smooth and icy, it skidded, and with this his body swings freely into space with both hands gripping onto the one axe like a child on a rope swing. Battling, a foot is pushed back to the rock and he tries again. And again a foot shoots off the face. But again he places his foot to the cold rock and something this time gives purchase. A pull higher with the aid of a crampon point, but with the extra height the axe rips from the crack and he’s flying.

The wind is howling and laughing now and driven in on the wind the fat flakes of snow slap into rock and stick.

After a brief rest Dougal tries again and reaches the top of the wall and leaning over the lip, hooks and scrabbles and swings an axe and catches a large block which holds him long enough to allow a pull-up.  But without warning the block rips clean from the top of the buttress and twists and turns and plummets until exploding beside me into the snow. Tavener is once again hanging but now he is totally a part of the game.

“Try going right, I’m sure that will be the way.”

A tiny flake to the right was hooked and matched before a delicate layaway and a high step enabled the turf and ice above to be reached. A belay was found and I seconded the pitch clean. The Eurowad was beginning to come good and get to grips with the intricacies of Scottish winter climbing.

Unbeknown to both of us was we had just climbed the summer line of Ventricle, the winter line avoids this section of the climb by a corner to the left. 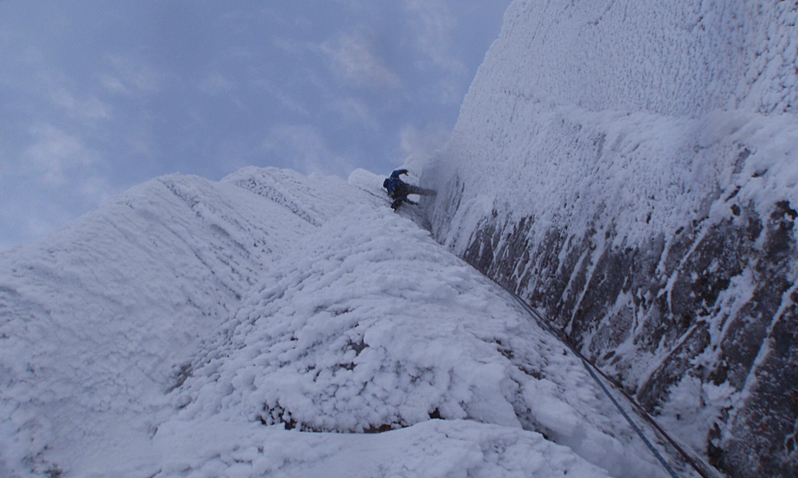 A vertical snow encrust corner like Cenotaph on Dinas Cromlech now soared above me, but after all of the insecurities below it was a joy. I slotted pick after pick, pressed front points on opposing walls and dropped in bomber nut after bomber nut until I pulled out of the corner a free man, let out on probation for a short while anyway until Tavener caught up. And the roaring wind applauded our persistence and in its zeal for our continued struggle it slapped our backs with a mighty white hand. 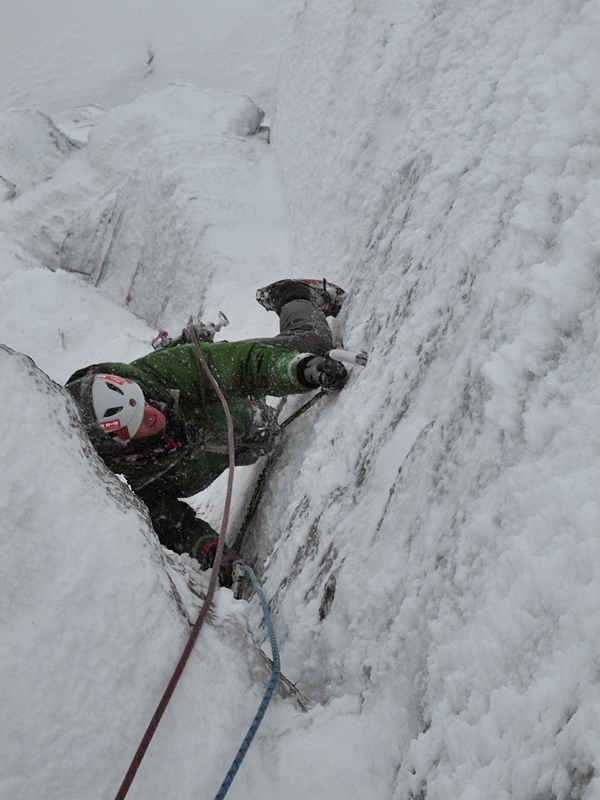 The final pitch was a narrow overhanging chimney and a steep corner that was plastered in a thick layer of rime stuck to the rock like crunchy crackling skin, oozing oil on the outside of a pork joint. Satisfaction coursed through our veins as much as eating the crackling would have and blasted by the gale and peppered by cornea melting snow pellets we crawled like blind men from the top of the crag. 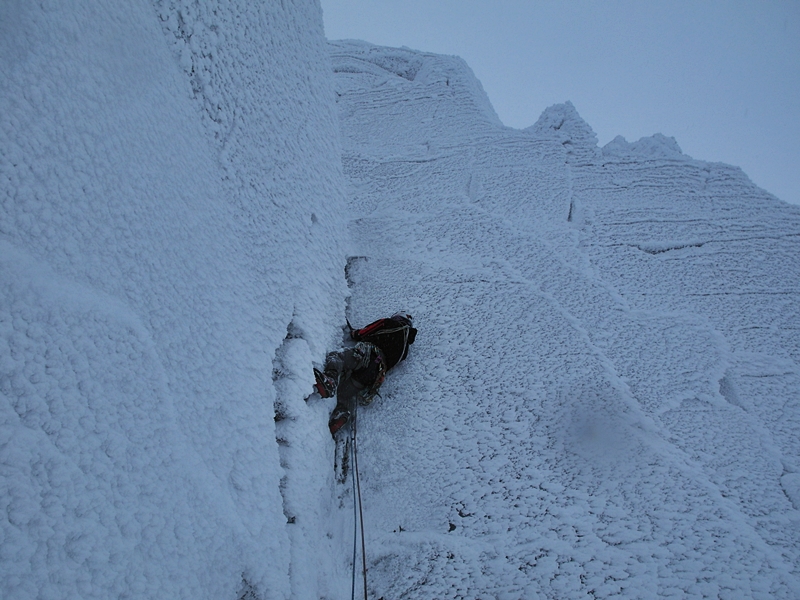 Another day, and after trudging for over an hour we stand fifty metres away from the crag. The loaded slope of Observatory Gully has gone, we have walked across the top of the avalanche debris, thousands of tons of Quaker harvest crunch clusters filling the gully that make it safer, or so we hope while trying not to think that the harvest crunch may be lying in wait on top of a layer of snow similar the one which has already gone.

Short of the climb we are faced with a crown wall to our left and an unstable section of snow we need to cross to reach the climb. And so we turn…

For tomorrow is another day.