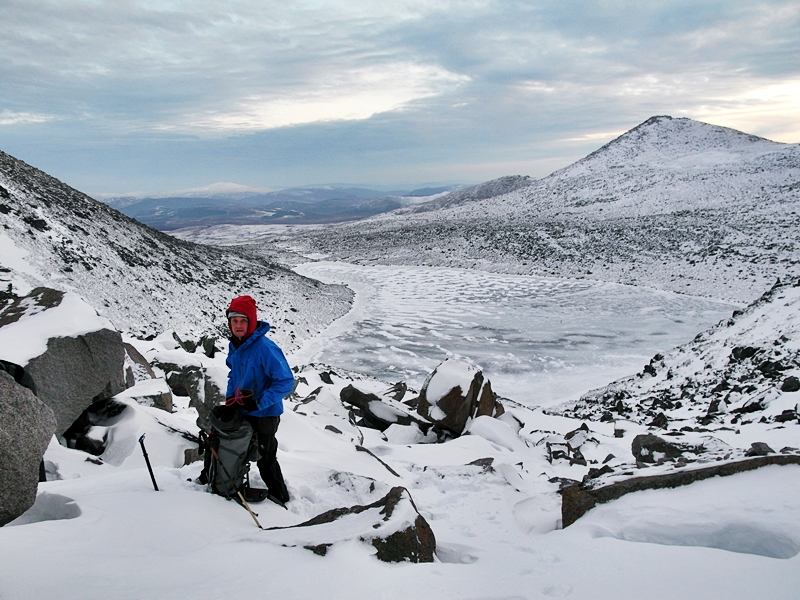 Riasg, the CC Hut at Roy Bridge is a modern bungalow. Sitting close to the radiator looking through the large window I watch the rain fall, it soaks the grey lichen stuck to the crisp bark of the silver birch. The rain pours darkening the straight and sturdy hazel – flattening the mole hills. Yesterday the whole of Scotland felt like an orange sucked dry, a barren frozen desert.  But for once I don’t mind the rain, it gives time for reflection.

Two days ago I dumped my van at the side of the road in the middle of Aviemore and hitched a ride to Lochnagar in Big Tim’s Transporter. On the way we passed Keith Ball who was parked-up in his van snoozing in some out of the way layby. Keith woke up and followed. It was so dry the moors were burning. Smoke filled the glens. White hares skidded into the road, twisting bendy bodies, wheel-spinning paws, large erect ears. The sun set behind the smoking moors, the sky a striped blue, red, grey and the moon began to glow. Stars flickered. Glenfiddich, Glenlivet, Arbelour, Tomintoul, The Spey River, houses that look like castles and hump backed bridges with bigger humps than camels. Driving through the stone town of Ballater we called into co-op and bought a bottle of Argentinian Shiraz. 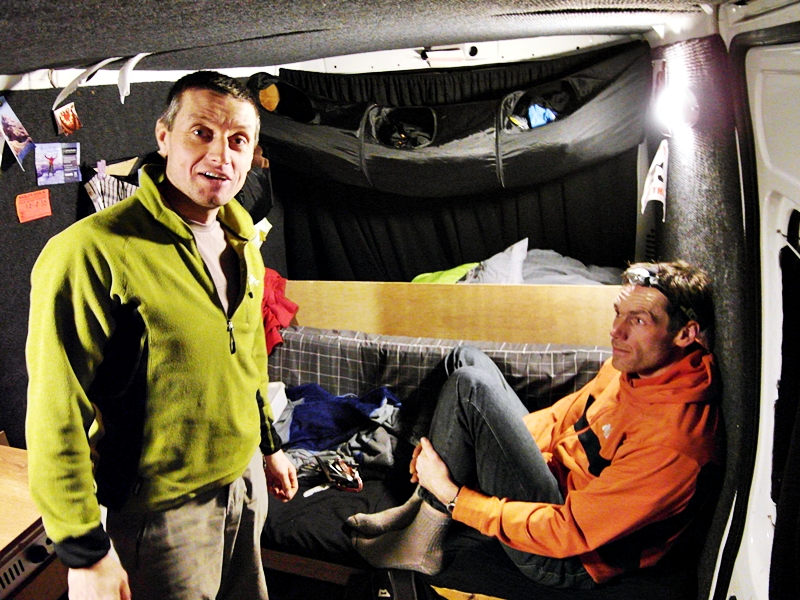 Later, sitting in Keith’s van parked in the Lochnagar car park the rack was sorted – wires, nuts, torque nuts, cams, extenders, a few pegs and a couple of turf hooks – we drank the wine, chatted, ate a meal, chilled and eventually crashed. Outside the moon cast a shadow and ice silently grew.

Waking at 5am and walking into the Gar the following morning was magical. Chuckling grouse ran through the heather. Ptarmigan exploded in a flurry of white wings and the river with its dark peaty water flowed over rocks that had a lion’s mane of ice. Stars fade and slowly the night loses the battle with day and reveals stark beauty. The rocks on the col stood out in the razor sunlight like someone had hit the sharpen button on photoshop too many times. Scoops of snow wrapped smiling around the rocks.

Entering the wide Black Spout Gully, we are surrounded by rimed rock and towering walls. We stop beneath twin vegetated cracks, the start of our climb, The Link Direct, a four star 180 metre, seven pitch, VIII/7 first climbed by Richardson and Cartwright in 98.

Tim set off and once again I am travelling in time, living and making memories that will stay with me forever. 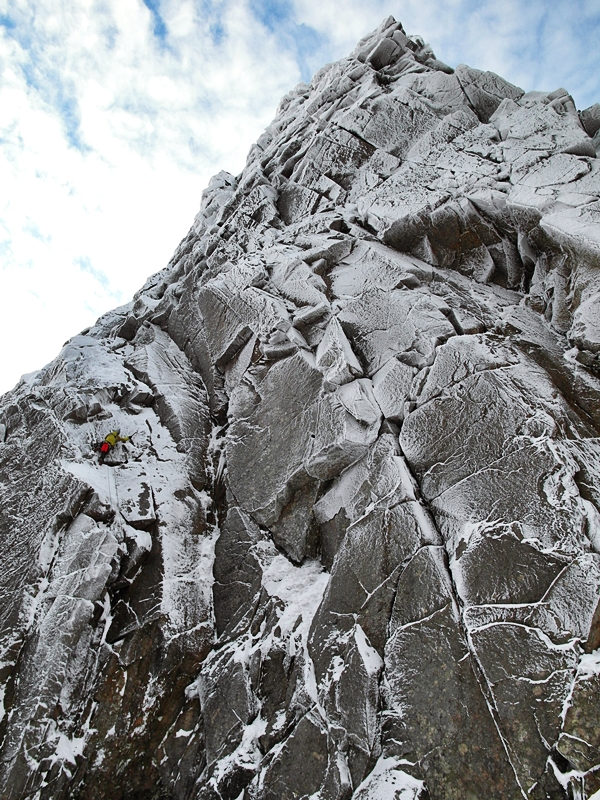 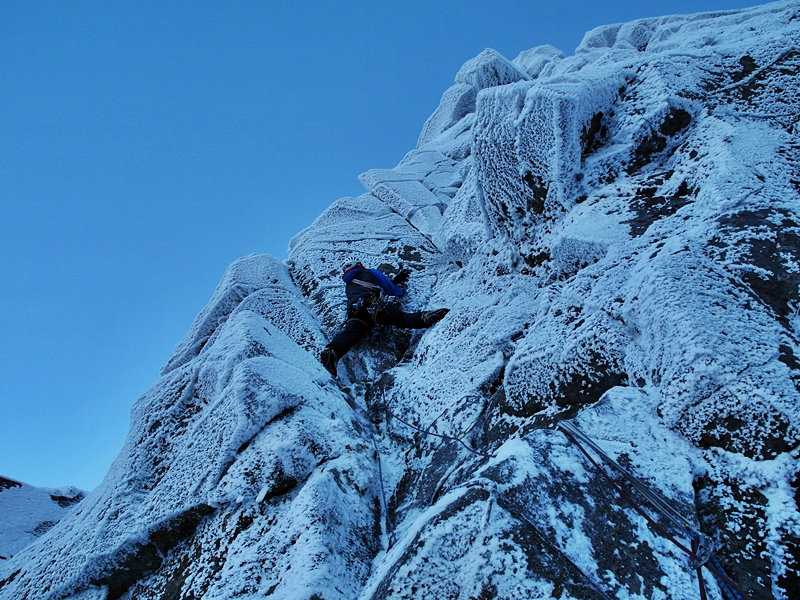 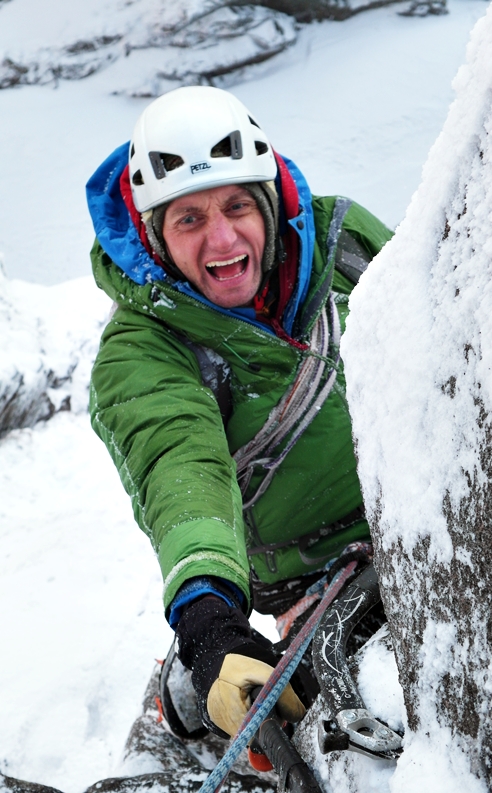 We successfully top-out in the daylight and rig an abseil around the summit cairn of the pinnacle. Sliding into Black Spout Gully the moon is once more in the sky and bands like a cocktail layer the horizon. 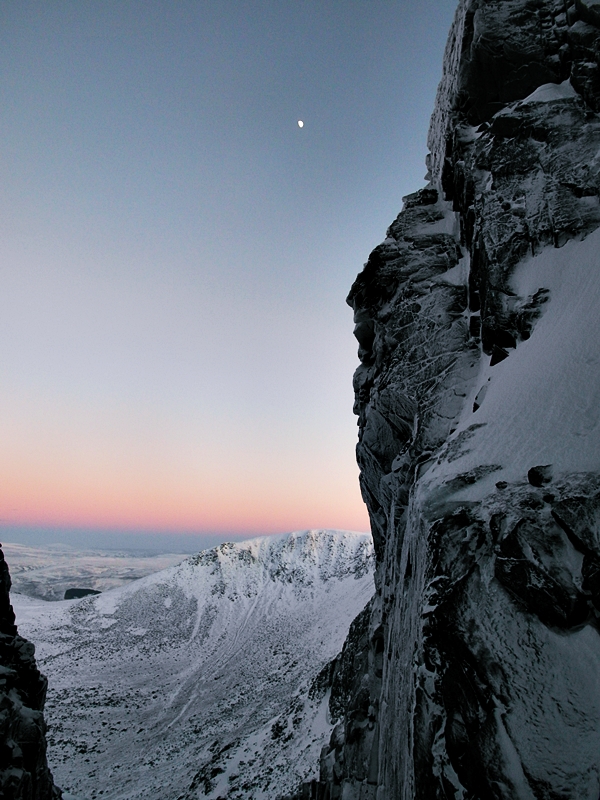 A couple of hours later we are back at the vans and heading to Aviemore and the Northern Corries. I sit in the passenger seat slipping into and out of contented sleep, house lights and the odd street light pass by in a yellow blur through the fug on the windcreen. Tim flicks the i-pod, Underworld are bumping. I wake up to “Larger, larger larger … And punch the air.

I don’t eat chips and sitting in Aviemore, having just bought a box of chips for £2.50 and then having to buy a portion of tomato sauce for 20p, (It’s no wonder Britain is in a poor state when you have to pay extra for sauce!) to stop them being as dry as the road, I now know why I don’t eat chips any more. But later in Keith’s van the South African Chardonnay makes up for the cardboard potatoes and feeling 14 percent re-hydrated I was now ready for another day of climbing.

It’s easy to dismiss the climbing in Lochain, but all said and done it is brilliant – even if the situation and the closeness to the road don’t give that feeling of major adventure. Tim and Mark Walker climbed the Migrant Direct while Keith and I climbed Nocando Crack and I would like to say it was a breeze, but it wasn’t. Picks rounded, turf like steel, thin cracks all welded with water ice and unbelievably sustained technical climbing found me nearly falling when both picks refused to bite and popped simultaneously. A swing caught something and it never fails to amaze me how strong I can be when hanging from one shoddily thrown pick placement. Thrashing and flailing, eventually I extricated myself from the body-eating flake at the very top of the climb and Keith with much less flail than me soon joins me to stand alongside.

Walking out of the Corrie, once again stars were appearing and a full moon large enough for us to look into the craters peppering its surface was hanging high above the crag. Grouse were chuckling, hares skittered punching holes in the powder-dry-snow and the still silence hissed in my ears. We walked out of the Corrie avoiding the large wax like smears of ice and after an hour we were back at the vans.

Today the rain falls and sitting in the warm living room with eleven routes in the last two weeks I feel exceptionally fortunate to be me and to be in Scotland.