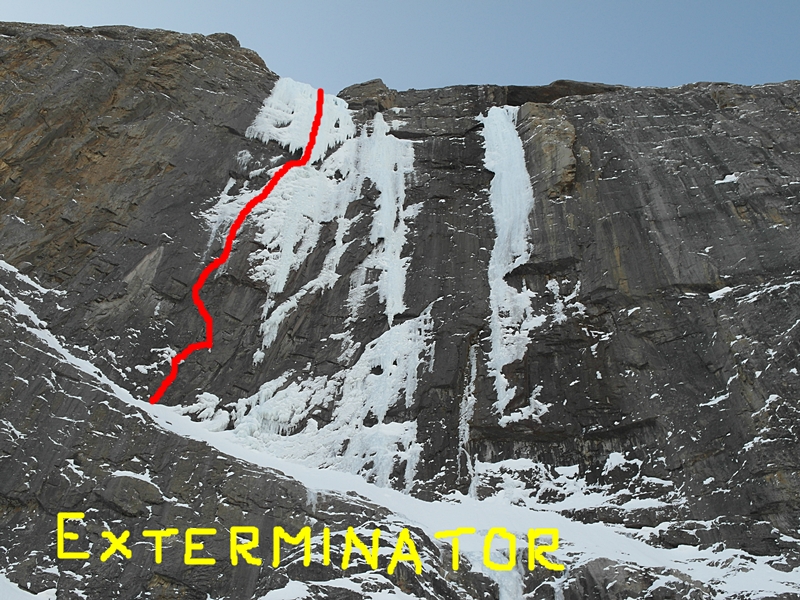 I slump and the large leather chair wraps its comforting arms around me. A rest today after climbing Whiteman Falls yesterday. The living room in The Alpine Club of Canada’s Clubhouse is spacious. Clubhouse conjures images of austere, frugal, sparse – this clubhouse is anything but. A fire warms the room. The floor is made of wood and polished. Shelving stuffed with climbing journals and books runs the length of one wall. Another wall is not a wall at all; it’s thick wood pillars hewn from ancient pine separating large panes of glass that look over forest and scrub to snow covered mountains. A freight train pulling gravel hoppers rumbles through the outskirts of town. Bright patches of snow dappled with sun lie beneath the trees. A blue and orange nuthatch gripping a large trunk faces down and probes the bark. Pine Martens, like large red ferrets but with broad shoulders and heads and furry legs flit between the trees – backs arched, alert, sharp, alive.

Computer in lap and I receive emails from one of the greats of Canadian climbing, Raphael Slawinski. We are meeting on Sunday to attempt Haunted by Waters, the direct start to The Sea of Vapours on The Trophy Wall. The climb passes a massive roof, followed by two more roofs until meeting that aircraft-exhaust-trail-of-ice, but it does have a few bolts as long as they are not covered. ‘If they are covered in ice just put a screw in,’ I hear you question, but what if the ice is not thick enough for screws? Dilemma. But isn’t this the way? Raphael refuses to walk the golf course road on the Trophy Wall approach, who can blame him when he’s no-doubt done the approach a thousand times, so after much collective email wrangling, today, Chopper and I have to find Eamonn Walsh’s house, another Canadian climbing legend and attempt to fit two bikes into the muscle car.

We are meeting Raphael at the Summit café at 7am tomorrow, Raphael doesn’t like early starts! This makes Chopper Greenwood and I laugh as the morning we climbed Replicant we woke at four, left the hut at five and locked the car to begin walking at twenty to six. No doubt we will also have time for a coffee, maybe a bagel?

Through the glass of the Clubhouse the air is clear and for once the wind is still, the sky blue. I look at Rob Owens blog and the picture of him pulling the moves to get around the first roof and the picture makes me slightly concerned, but nowhere near as concerned as Chopper. Straight shafted axes’s, leashes, body extended. Wow, that roof is big but given that old school gear, how hard can it be? … 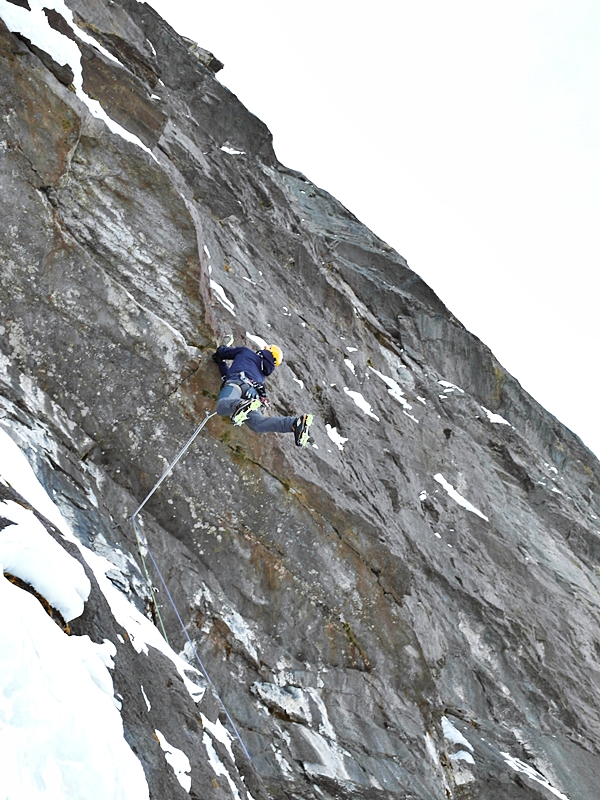 Raphael Slawinski doing what he does. It aint Scotland! Rob Greenwood.

…Impossible in its present state is the answer. Raphael has cut loose, swings, pulls, swings, he’s given it a really good shot but the ice isn’t low enough and water worn limestone doesn’t lend itself to dry tooling, “Take.” The luxury of bolts.

I stand and look up at the slither of ice that should be Postscriptum. A quickdraw, disguised in the moss and dirt hangs. I remember using it to pull and stand to reach a skin of ice out right – I remember Dave Hunter doing the same and then struggling some more. The quickdraw is attached to the number one nut from our 2003 Sea of Vapours ascent. The nut that held a twenty-five foot fall, and even though there is more ice now than in 2003 I don’t relish the thought of tapping the skin with no gear and possibly repeating the experience. Raphael climbed a thin Postscriptum earlier in the season and no way is he repeating that experience. Chopper hasn’t volunteered either! “It’s X rated going up there, super dangerous ground fall.”

We kick steps in deep snow – move left, look up … The Wall calls and time ticks. 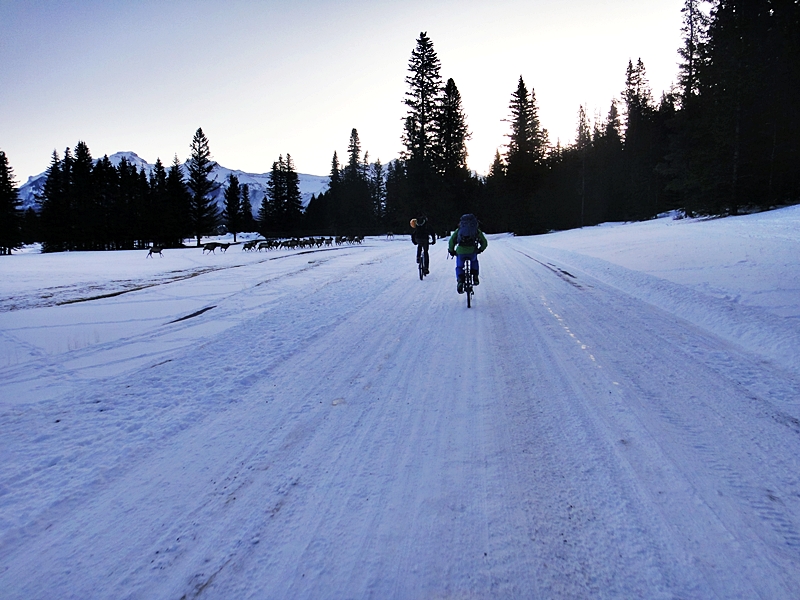 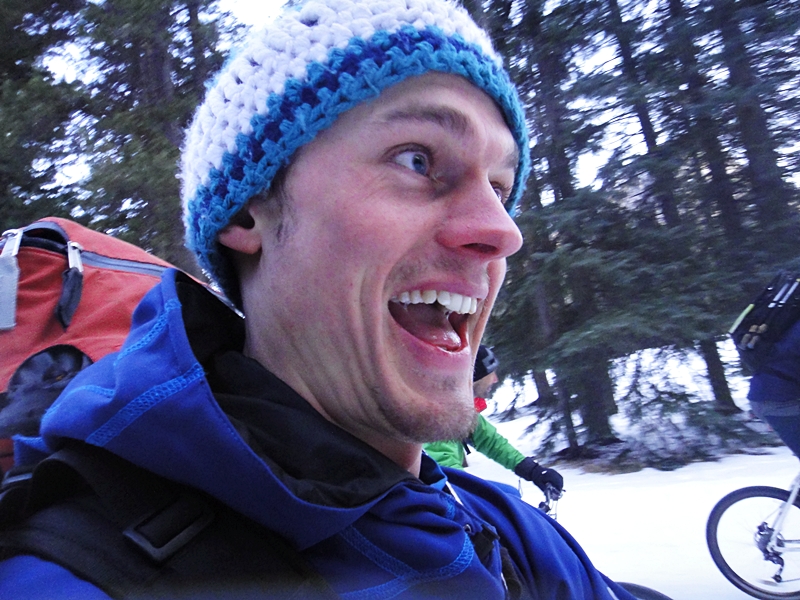 Cycling some of the approach through the golf course passing the heard of elk was fun and speedy – well, until the tyre went flat on my bike and then it became a thigh burning, lung busting sweat-fest, but it hadn’t saved that much with our relaxed start.

Terminator with the T-2 start looks funky but the ice looks suspect, we move left again until stood beneath Raphael’s new route Exterminator put up early this winter with a crew of partners, Eric Dumerac, Juan Henriquez and Simon Parsons. “So what does this entail Raph?” I ask with trepidation, Dr Slawinski sandbags are infamous, although I truly believe it isn’t because of any evil streak, it’s similar to Mick Fowler who at one time gave every Scottish climb grade VI, because he didn’t appreciate how useless the rest of us are. “Its M7+ Nick, it has some bolts and natural pro.” “How much natural pro does it take?” I asked this as we only had ice screws and quick draws. I had asked Raphael at the car, which was parked three hours away, what gear he had packed and he sounded quite confident at the time that we had enough. In his defence we did have enough gear for the intended route but how often do things change when on missions like this. “So, correct me if I’m wrong, your route is M7+ (read anything into this, it could actually mean Scottish tech 10), it hasn’t had a second ascent and the only attempt was by Jon Walsh, he of Man Yoga on the Stanley Headwall and uber climber, and he was shut down, (all be it in super cold weather) and the route needs gear.” “Yes.” I ploughed a furrow to beneath the line, looked up and saw holds. “Ok Raph, let’s give it a go.” Having the first ascentionist on the team who knew the exact line and the position of the bolts and pegs would, I hope, trump the not having any natural gear. 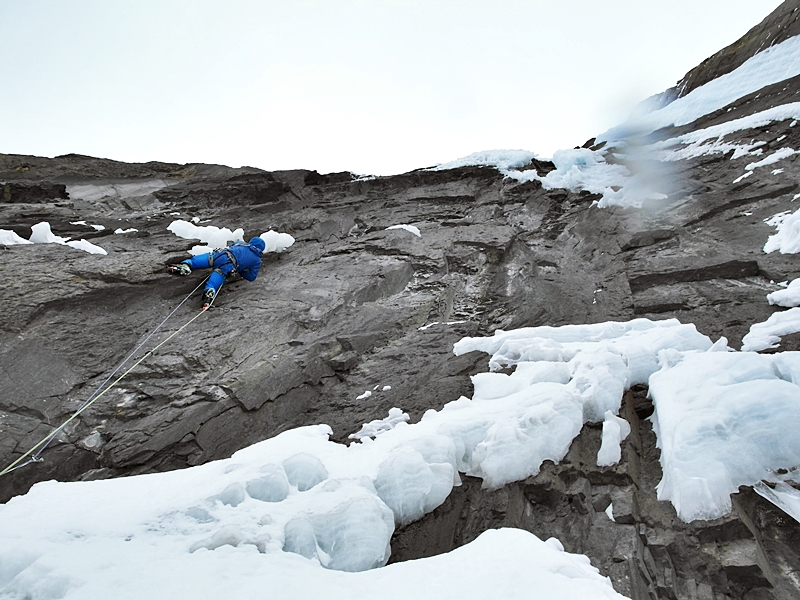 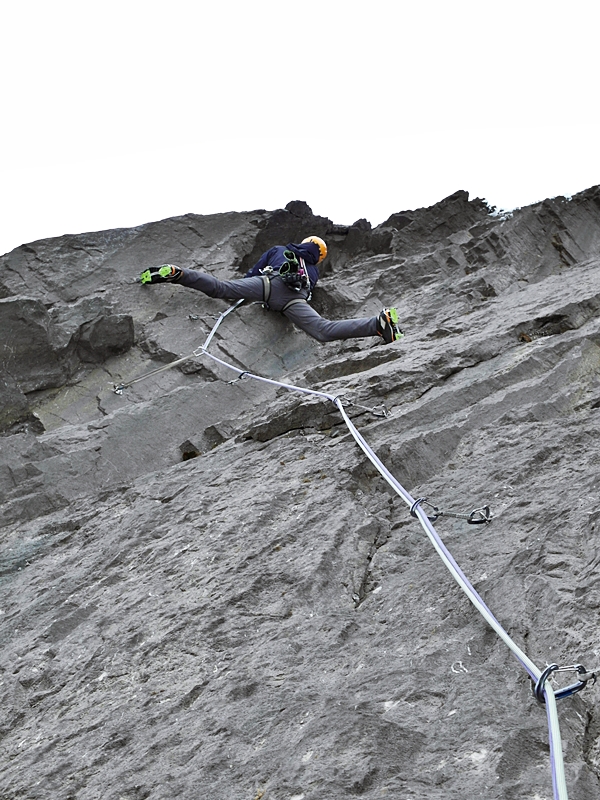 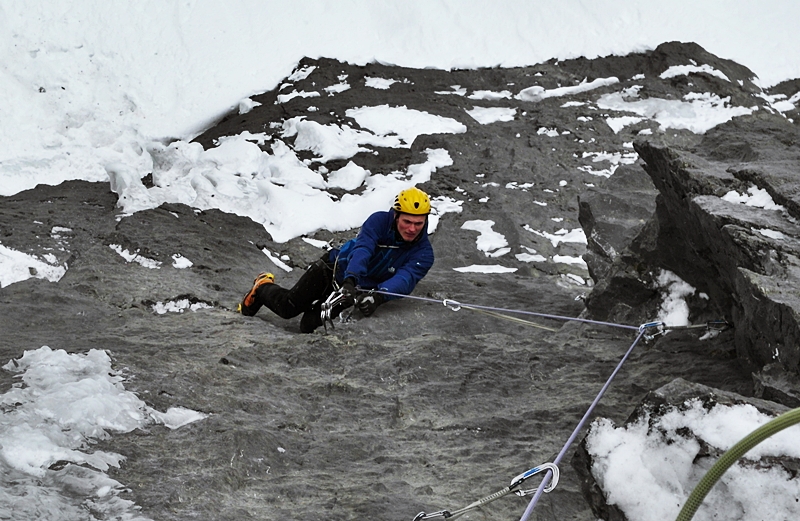 Chopper Greenwood not looking all that cool or composed. "Its like a whole new game." 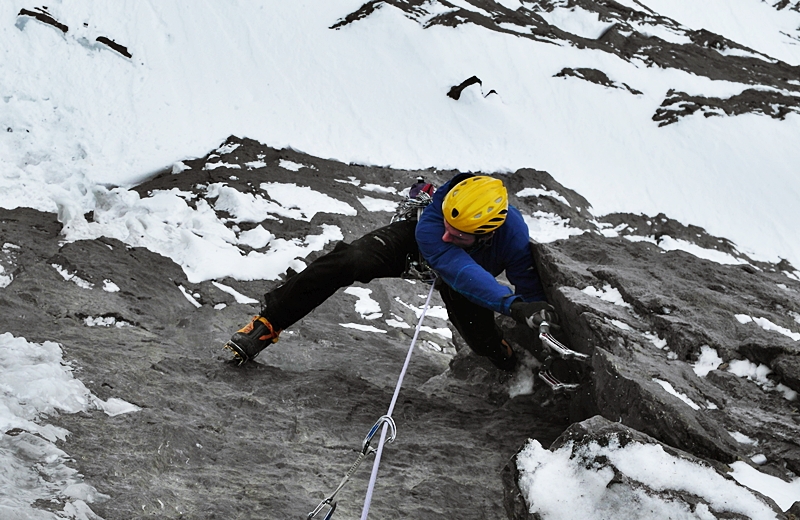 Two pitches up and things were looking rosy. The crux pitch was below and one more forty metre pitch would lead to the cave and the final sixty metre pillar of the Terminator. The third pitch of Exterminator followed a crack and traversed hard to the right aiming for the ice of Terminator, but since Raphael had climbed the first ascent ice had gripped the rock, and covered what was a dry tool pitch. Three pegs and four bolts were hidden beneath the cold skin and the perfect torqueing crack was clotted with water ice. I set off, the climbing immediately steep without much in the way for feet. 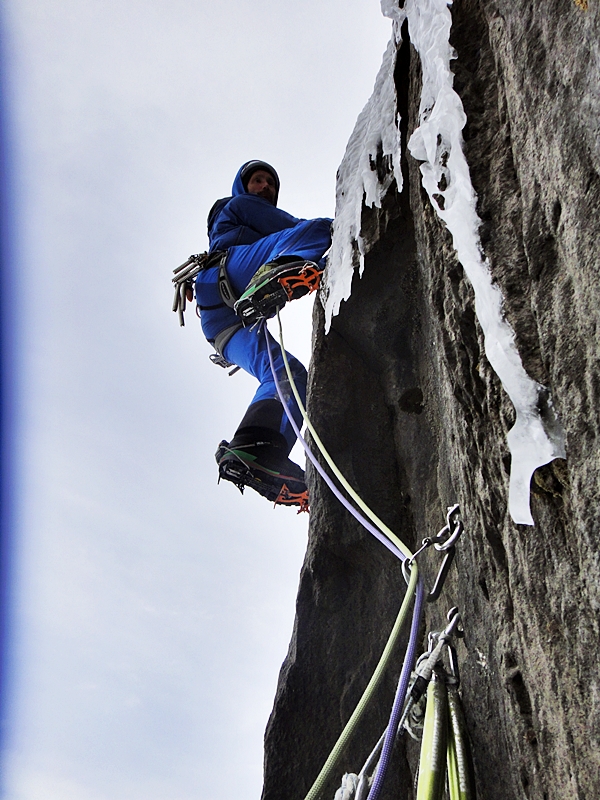 Starting the third pitch. There would be cams to protect these moves if we had any! A belayers worse nightmare. Rob Greenwood.

Swing, the pick penetrated ice and found the crack. I dug out the first peg. Swing, once again the crack was found. Slowly, teetering, the thin ice skin penetrated, creeping, flick, balance. At the height of the original traverse I continue direct preferring thin ice and tied off stubby screws. It was one of those situations, one of those, should I or shouldn’t I. Do I go for the bolts that were buried with more difficult climbing or go direct with easier but bolder climbing. No choice really, I flicked a pick above and teetered up into crud and no protection and adventure. 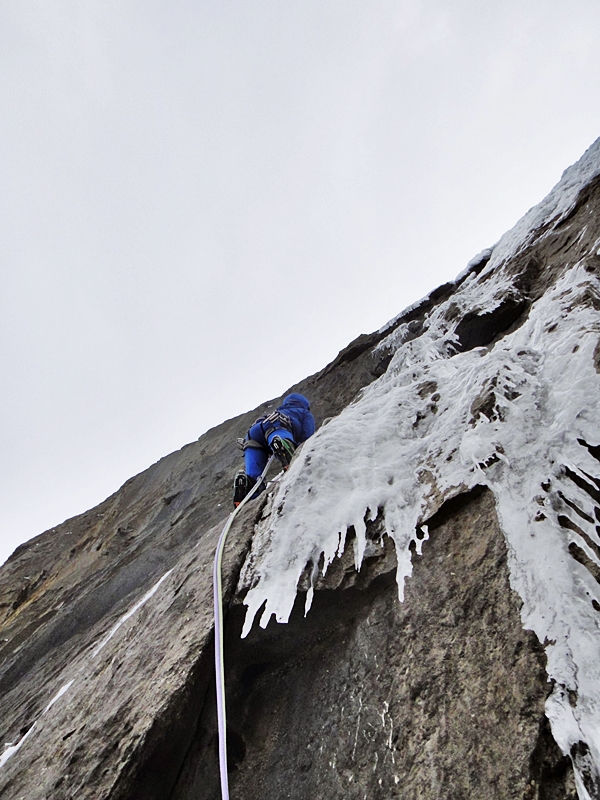 Stood in the cave at the top of the new direct third pitch surrounded by the drooling ice of The Terminator I looked out towards the Trans Canadian Highway and snow covered mountains and pine forest. The Trophy Wall, certainly one of the most special, unspoilt places to climb in the world. 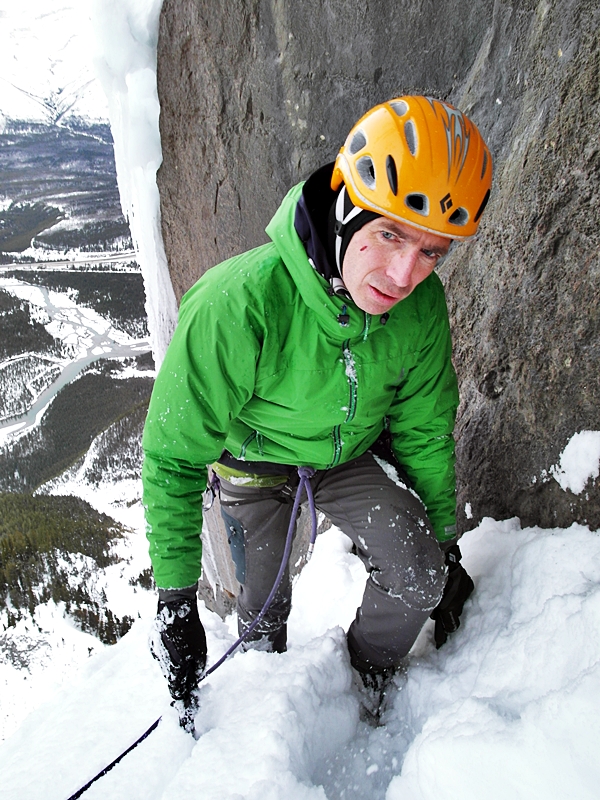 Dr Slawinski topping out on pitch three. "Ah, a stubby in the belay... Novel!" 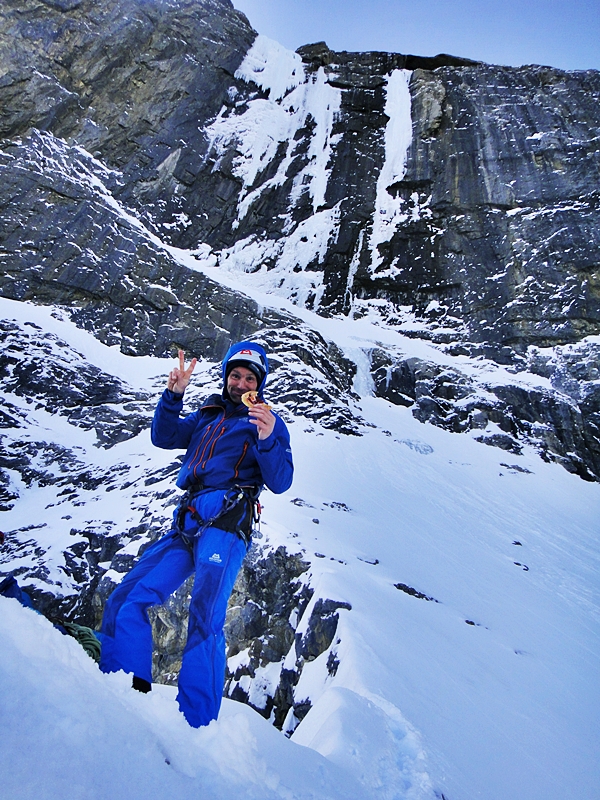 Victory, twice on THE WALL in the same trip and more Danish. Rob Greenwood.

2 Responses to Exterminator. The Trophy Wall.