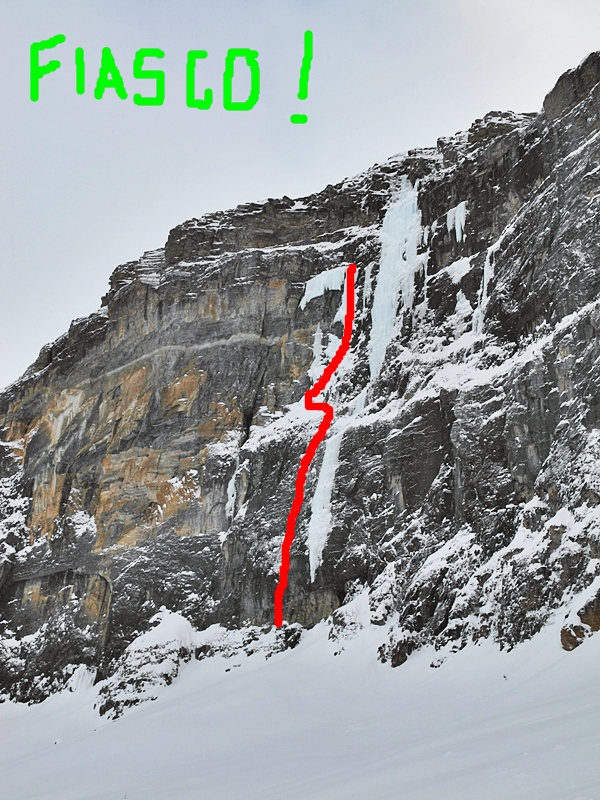 We sat for two days. Snow fell – a thousand-million fat flakes, a maelstrom of white plastering the hills. Unconcerned, near the end of this amazing Canadian trip, we sat, knackered but satisfied, knackered, but wanting just that wafer thin mint to add to a stomach overflowing with ice and mixed and cold. We wanted one more of what The Stanley Headwall could throw at us, but the snow brought about doubt as The Headwall is not a place to be in the fresh.

Two days passed and Saturday arrived, our final day to climb, and we took it. 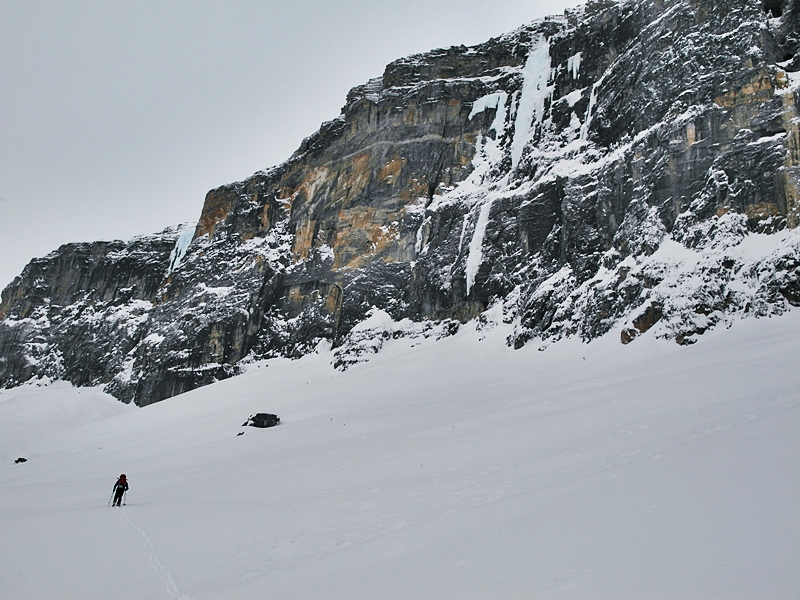 To The Headwall but not for the route we really wanted to sample, the route we chose would be a safe easy option given the conditions, it would be a nice way to finish the trip. 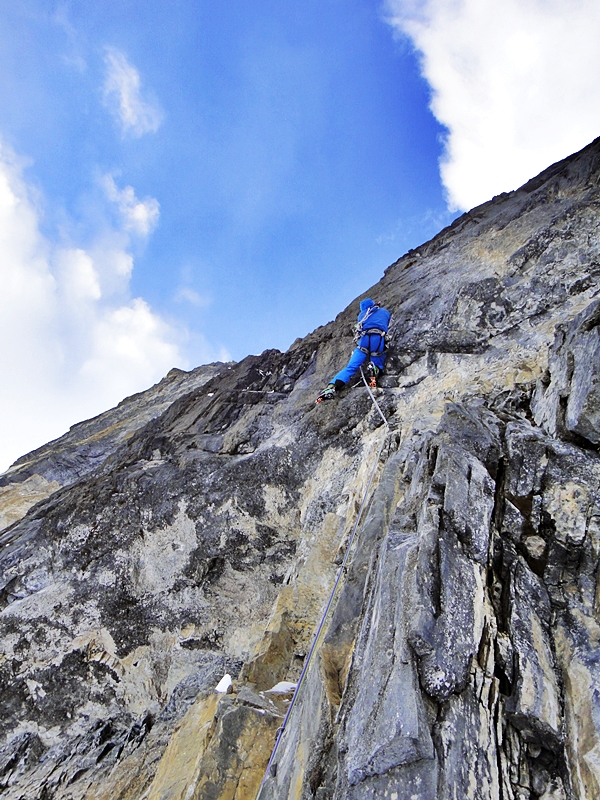 "OK, its all pretty cushty up here, nice bolts, good climbing, nothing can go wrong!"

Swinging left with a bolt to protect the very thin moves, I climbed the crux of Fiasco with relative ease. ‘OK, I must now be a God?’ Pulling into a groove with a perfect hook, all of the one tooth placements and overhangs behind, a massive block ripped and I was flying. In some ways it was ok, it was well protected, but in some ways it was a bas#*rd, I wanted to climb this pitch clean, this was the first fall of the trip. ‘Robbed’.

Pulling back on I climbed to the top of the difficult section and looked up to what should have been grade WI4 ice protected by screws. A steep groove covered in snow with islands of frozen moss and patches of rotten ice was what I saw. I continued to climb way above the last bolt with only screws on my harness. With each move the climbing became more insecure, farther away from the bolt, more scary. If I fell I would be falling for quite some time until hitting the snow next to our ski’s. Was this what I wanted from our final climb?

Rob had some wires and pegs on his harness but he was out of reach, out of sight. I hung from two insecure placements, standing on two insecure sloping foot holds and after pulling through a loop and dropping it – Rob had climbed to the loop and attached the gear – I pulled it up and eventually hammered two blades and an off-set.

Leaving the gear beneath, a long way beneath, the bulging groove turned into the most wiggy-cheeky-spicy pitch of the trip. These unwanted words ran through my head, Raphael had now begun grading on the Tim Emmett scale after climbing with him at Helmkem Falls earlier in the winter, and wiggy ( a James McHaffie term and one I had introduced into the melting pot to Raphael) cheeky-spicy were not words I wished to use on my final climb.

Teetering, picks in a rotten skin or just resting on loose flakes, teetering, breathing controlled, teetering, higher, higher… the gear was at least ten metres below, I found another wire placement before tapping a rotten skin and rocking over on rounded footholds to reach the belay. 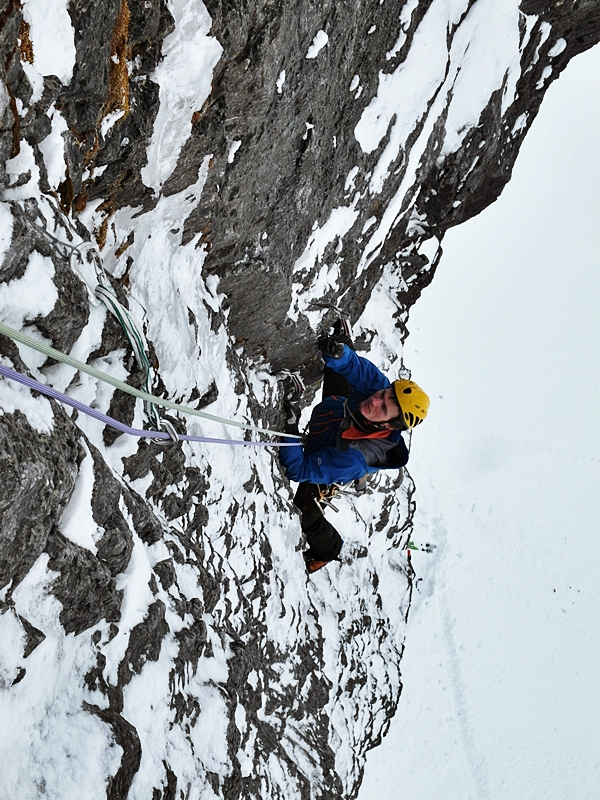 Entering THE GROOVE. "But where is the ice" 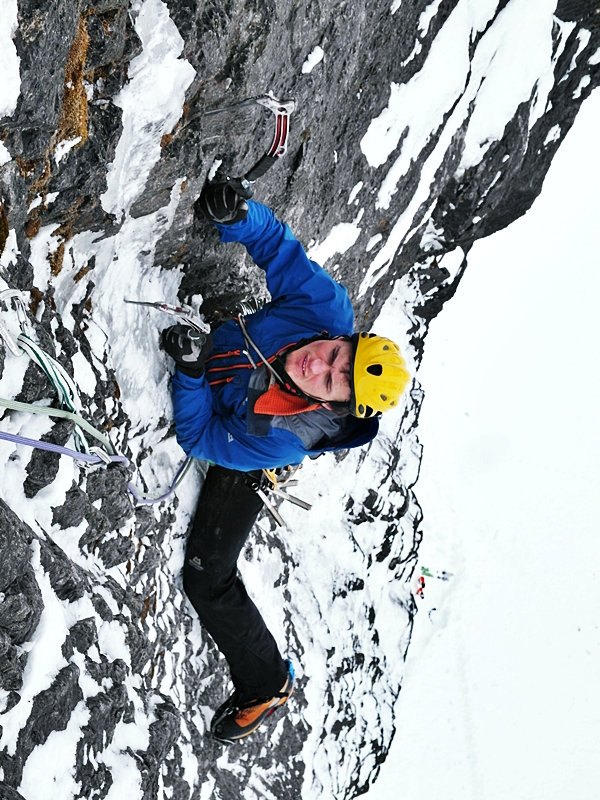 "Hmm, i thought WI4 was supposed to be easier than this." THE HORROR GROOVE. Nick Bullock

Rob joined me and set off on pitch two… a funky looking rock-flake and thin ice streak. This climb was not going the way we had anticipated, but I’m sure it would be the final climb of the trip to end all final climbs of future trips. 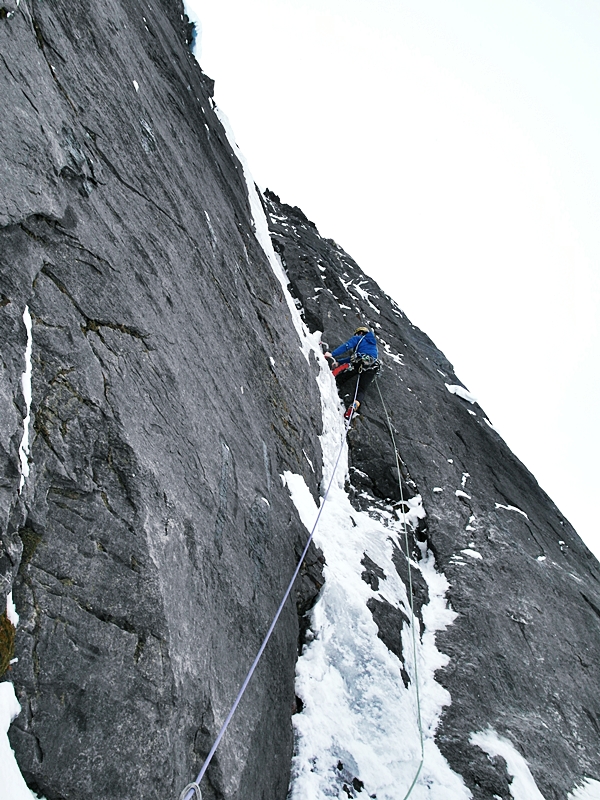 "I'll just take off my gloves and layback it.! 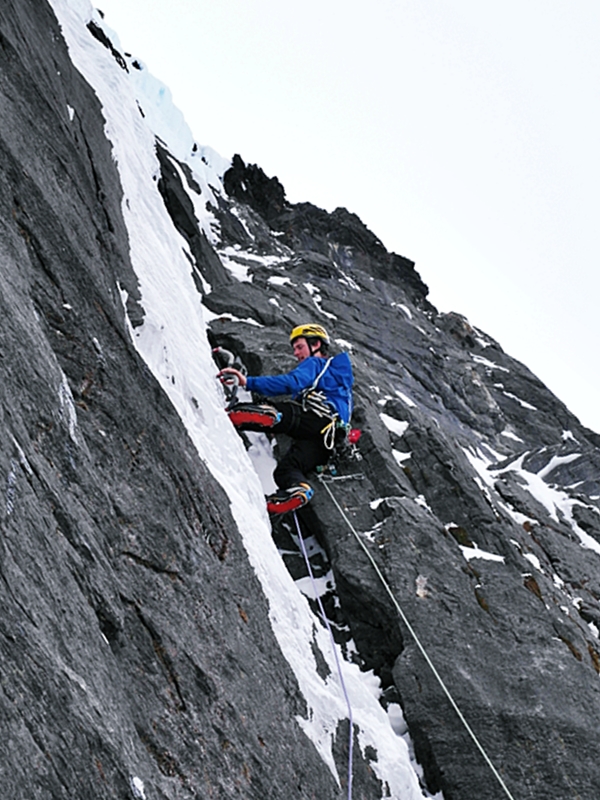 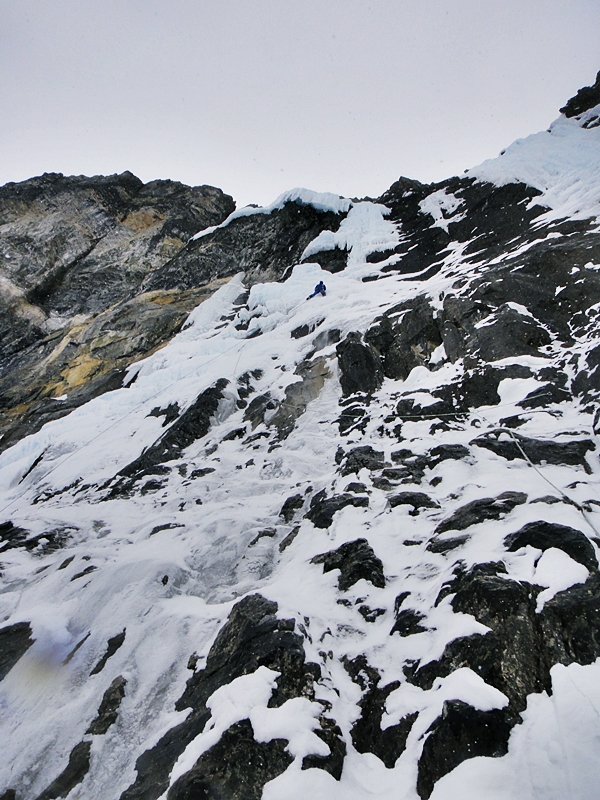 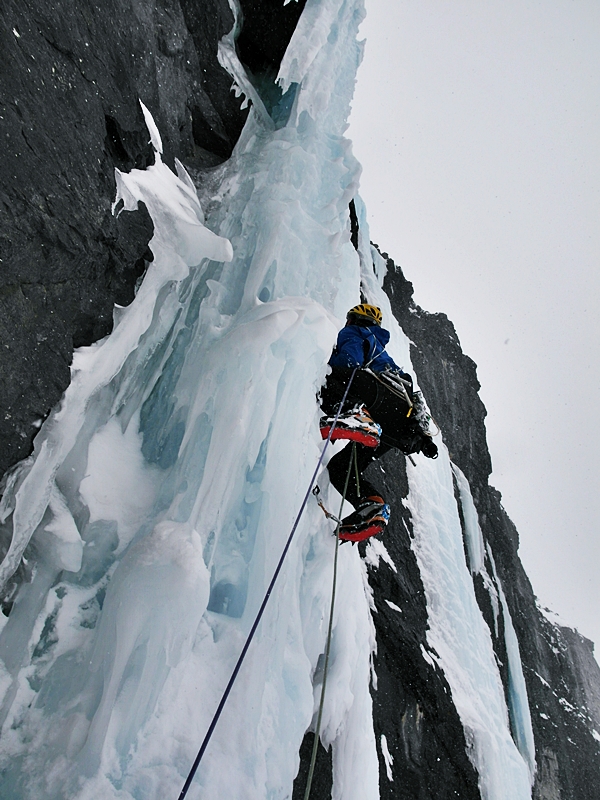 We jump on a plane later today. Fifteen routes in twenty days, great memorable climbs, with great people along the way. This is surely what being a full time climber is about, this untainted adventure in wonderful surroundings without any other reason to be here other than the act of climbing and testing one’s own abilities.

Busy times ahead on my return, the BMC Alpine Lectures and a book to finalise the editing, with images to sort out with my publishers Vertebrate and all before leaving again to go to Alaska to attempt the Slovak (Czech) Direct with Andy Houseman on Denali.

Cheers for all of the help, loan of gear, support, beta, encouragement, but most of all cheers to everyone in Canada for the friendship and for those coming in the future remember one thing, there is a term in the guide book that goes something like this ‘There are grades and then there is being Dr Slawinskied!’