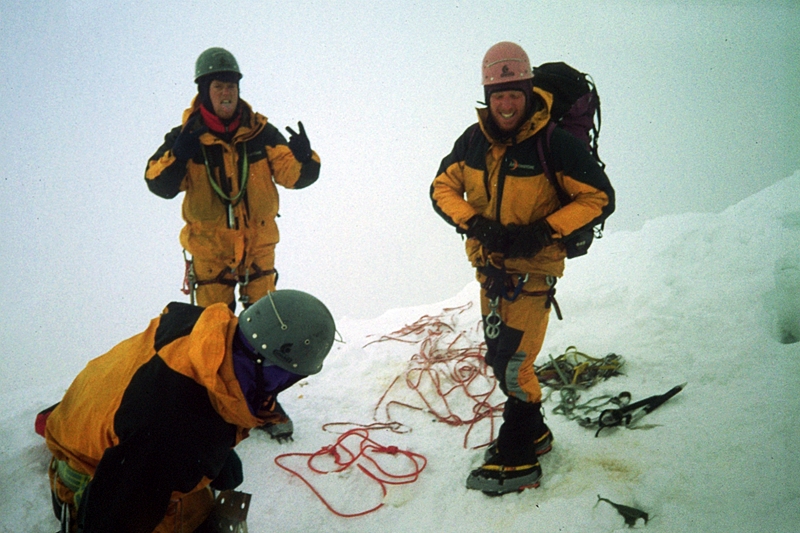 On May the 21st, with Andy Houseman and thanks to TNF, (Andy’s sponsors, I’m just the camera man, although as there will only be the two of us I don’t think I’ll get away with seconding all of the hard pitches) we fly for Alaska. We hope to climb the sixth ascent of the Slovak Direct on Denali (Czech Direct, Adam, Krizo and Korl 1984 http://old.risk.ru/eng/mount/reports/czech/index.html ), 58 technical pitches topped by a slog up the Cassin Ridge to the 6194 metre high summit of Denali. (We will I’m sure consider the climb unsuccesful if the summit of Denali is not reached, although, whatever, I’m sure the outing will be an adventure.)

The base of the climb is difficult to reach and after reaching the halfway point, according to Jesse Huey – one of the team of two, Mark Westerman being the other who made the fifth ascent in 2010 – “Rapping from anywhere above the halfway mark will be almost impossible.”

Riding the Hippy’s new red road bike through the mountain passes of North Wales, thin rubber tyres stickily whistle as I battle the headwind along the side of Llyn Cwellyn, that deep whispering lake rubbing against the base of the moody Castell Cidwm (Woolf Castle). I ride past the reconstructed narrow gauge railway station and on through the hamlet of Beddgellert – ice cream, The Royal Goat Hotel, B&B, beer, milling tourists – past the Red Dragon Bunkhouse and the start of The Watkin Path where Gore-Tex grinding forms that began the day spritely are returning – tap, tap, tap, walking pole points like a piano timer lead the attached withering body’s to their cars.

Churning the steep hill, head down, middle cog – the cars behind crawling as the road twists, lungs full to bursting, another corner, steeper, another corner, higher, past the ice cream van … at last the Pen y Pass and the youth hostel, the cafe, then I’m speeding, flying-freedom, speeding, overtaking cars – Scimitar Ridge, The Cromlech, The Grochan – The Llanberis Pass is a rhyolite blur.

Finally through Beris – legs, body and mind hit the wall, I nearly vomit passing the Galt y Glyn hotel – Pizza and a Pint… no thanks!

“Czech Direct” aka the Slovak Route. The hardest route on Denali climbs the south face. It’s rated 5.9, WI6, M5, Alaskan Grade VI. We made the 3rd ascent in 60 hours non-stop. Climbing this route left me psychologically drained for over a year. In part due to the stress of being so far out there and in part due to the realization that I had finished what I had started in the Alaska Range seven years earlier. It was my first world-class route.” Steve House commented after climbing the third ascent of the Slovak in a single 60 hour push with Mark Twight and Scott Backes.”

Its another day. Running the steep and at times nearly single track of Fachwen in the heavy rain – head bowed, two jackets, two hoods, squelching trainers – Denali rises in front of me, the hedgerows are billowing rolls of fresh snow, the slate blocks that form the walls of the single story cottages are now hewn lumps of ice. Fachwen rises above Llyn Peris and the town of Llanberis – cars moving along the road are dots – people trudging the Kahiltna Glacier far below. The deciduous trees lining the lane are wearing a new fresh jacket of broad leaves that hold water and then release like some Chinese water-garden bamboo balancing feature.

“The Czech Direct is certainly one of the best mixed climbs in the world. It’s crazy that it went unrepeated for 14 years.” Scott Backes

Travelling around the country with Tim Neill presenting the BMC Alpine Lecture Series I laugh and then complain and then moan at Tim about some people’s attitudes who complain about me swearing in the lectures or not being serious or not delivering the correct amount of technical advice. Life in the mountains isn’t clean, pristine, innocent – it isn’t always straight from the pages of a know how to book, it isn’t always good weather and perfect – mountaineering, I like to think, has moved on from the landed gentry conquering with their lackeys to carry the t-pot, but in some people’s minds maybe it hasn’t, maybe we should all just be stiff upper and long live the empire?

Crossing the busy road in London City Centre, people shoulder to shoulder bump and jostle and look at the ground. Walking fast, sometimes they catch your eye, sometimes they turn their head concentrating even more on the damp grey pavement. A steel box attached to the wall near the door of a pub smells of damp ground tabacco ash. Large banners high above the road show the perfect airbrushed forms of models, I wonder if this is how the mountains are seen by some who listen to the marketing pitch of the mountaineers who sell the beauty of the hills like perfume, a commodity for them to get rich, a one off adventure as long as you dont mind sharing your adventure with hundreds of other like minded, as long as you don’t mind walking through their shit?  The pavements, like the shiney ash boxes are full to overflowing with people ground into their existence, into the city life, life is grinding them grey. The guy sprawled on the concrete, leaning against the pen-daubed-tiles of the underpass doesn’t even lift his head and neither do I; I walk past him as if he isn’t there. I wonder if he worries about people using the word fuck? Guiltily I pass his hat which holds a few coins but I don’t increase his collection. I feel ashamed.

The TV programme I watch while waiting in the hotel, or is it a premier prison cell, shows people in Nepal and the jungle being taken drugs for inoculation. Even in the jungle the village headman lords it over the less fortunate taking their food like a fat politician taking taxes to feather their own multi floored, multi toilet, multi flat screen TV, drive-in, sweep-out inner city nest. Like a well to do upper middle class fool in a lecture that doesn’t have the balls to complain to my face but writes his or her complaint about my foul language on the BMC site, they both appal me nearly as much as, I’m sure, I disgust them.

“It was a nice climb.” Katsutaka Yokoyama, Yusuke Sato and Fumitaka Ichimura after the 4th ascent of The Slovak Direct.

Mountaineering also has the ability to shock. No doubt feeling very happy with their speedy ascent of the Slovak Direct the Giri Giri Boys must have been devastated to find that their friends were missing presumed dead on Denali’s Cassin Ridge.

Leaving London I feel fortunate that I have the choice and ability to leave and the choice to use whatever language I decide on that day.

The Alpine lecture at Newcastle on 24/4/12 was very good from Tim Neil. However Nick bullock was a bad example for British climbing to a mixed audience many of which will be the future for Alpine mountaineering. Follow his example after this and someone will kill themselves. He also mixed a fair amount of foul language and swearing into his half hour slot. Get rid BMC or get a hold of him and teach him how to grow up and be professional. Anonymous. (No doubt clean speaking, well educated but lacking the moral fibre and the commitment to sign their name or approach me at the end of the evening.)  http://www.thebmc.co.uk/modules/article.aspx?id=4553

If growing up and being professional means I have to toe the line and answer to the likes of this person I’m happy to remain a child and continue to attempt new climbs around the world and have adventures that inspire others and keep me truly alive. The day a few profanities begin to upset me is the day I die.

Not so long ago I read an article in the Guardian titled ‘Top five regrets of the dying.’  http://www.guardian.co.uk/lifeandstyle/2012/feb/01/top-five-regrets-of-the-dying

The number one regret was ‘I wish I’d had the courage to live a life true to myself, not the life others expected of me.’

Well I am living a life true to myself and I am not afraid to tell how it is and I hope I will continue to live this way and the day I become scared and brought to heel like this person calls is the day I will ask to be shot.

I will leave the final words to Carl Phillips, someone who doesn’t mind signing their name and who is open minded enough to be a climber and a mountaineer.

I attended the Bristol lecture just last night and was really impressed, both speakers were great but Nick was epic! He has a passion for his craft that shone through in every gritty story he told! I know people may have criticise him for being dangerous but its fiery, impetuous and daring climbers like nick that inspire and ignite our own passions to push our own limits a little further which is the entire point of climbing/mountaineering. Keep up the good work Nick, don’t let people that may not understand the personality of climbers get to you. You have to live on the edge or you wouldn’t be a climber! I could never do what you do and nor would I attempt it but hearing your stories makes me proud to call myself a climber and I am inspired to learn and do more, that you so much you inspire us all!

Thanks Carl and thanks to all of the folk who approached me after the lectures with wide shining eyes and aspirations and big smiles and dreams, long may you live free.