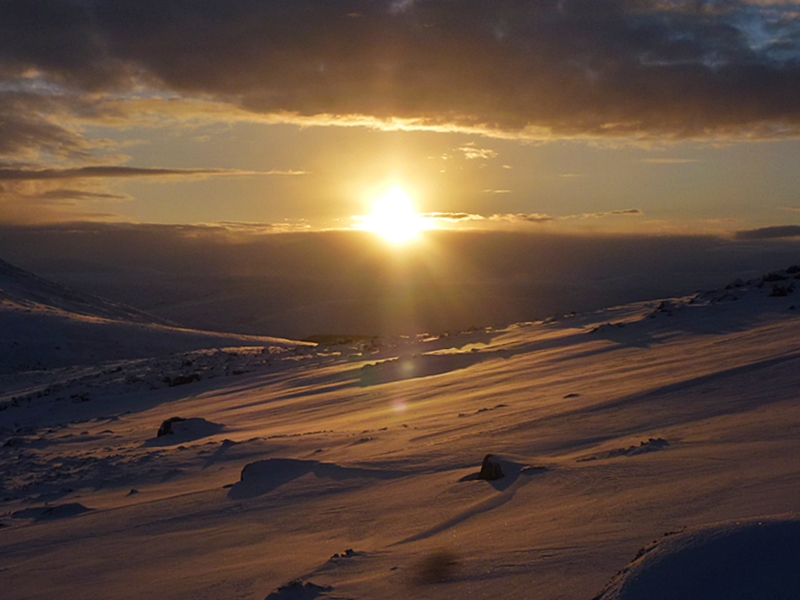 The hare, white fur with flecks of brown, stood still balancing on the crest of a snowdrift at the side of the road. “Don’t do it”

The breeze caught, ruffling soft fur. The hares run was perfect. Perfect that is for ending it all. Large dark eyes, long limbs, long ears like a victory sign. Bump. A loud thud resonated through the floor of my van. One less life. I continued to drive the Lecht road but felt sad. The moon grabbed angular man-made shapes built along the roadside – signs, gates, fences, white and orange snow-wands – lengthy shadows pointed the way across the moor. Mysterious. Dark. Barren?

Who decides when that’s it, time to die, game over? It certainly shouldn’t be someone in a red van!

Life is for the taking and having worked for most of January I was taking – but as always it was the sights, sounds, people, the mysteries and the experience that made climbing liberating, life-enhancing. It was the space and the never quite knowing, it was these peripheral things, the things that some people maybe can’t quite see, or maybe they just have not quite arrived yet?

Maybe I was just getting old and sentimental?

Two days ago – this time driving from Roy Bridge to Lochnagar, the snow fell heavy – so heavy as to close the road over the Lecht. White out was caught in the yellow cone of my headlamps. Ten-miles-an-hour – sideways Past Glenlivet distillery – sideways through Dufftown, my mind was sideways with concentration. I stopped and chained up in the sodium light. Granite buildings making-up the high street funneled the falling snow, which took no notice of the give way signs or the red traffic lights. Fat snowflakes settled on my shoulders, the heat in my body grabbed the crystals and melted. Fingers, wet and dirty from fiddling with snow chains, froze. Blood clotted on the back of my hand where I caught it on the wheel arch.

Why exactly. But I knew why.

Image surrounds us, engulfs us, but how much do we actually take in, how much do we see. Some people go through life not seeing. Arrogant of me to say this – certainly – but true I fear? Prove me wrong … please.

A bunch of classics, Vanishing Gully and Two Step on the Ben, Crowberry Gully on The Buachaille and Smiths Gully on Meggy. The sun shone – Scotland was almost Alpine. I had climbed Vanishing Gully nearly seventeen years before and Smiths sixteen years ago, but climbing them again with someone who enjoyed them for the first time, someone who looked through fresh bright eyes, opened my mind to the on-going wonder of the hills in winter. 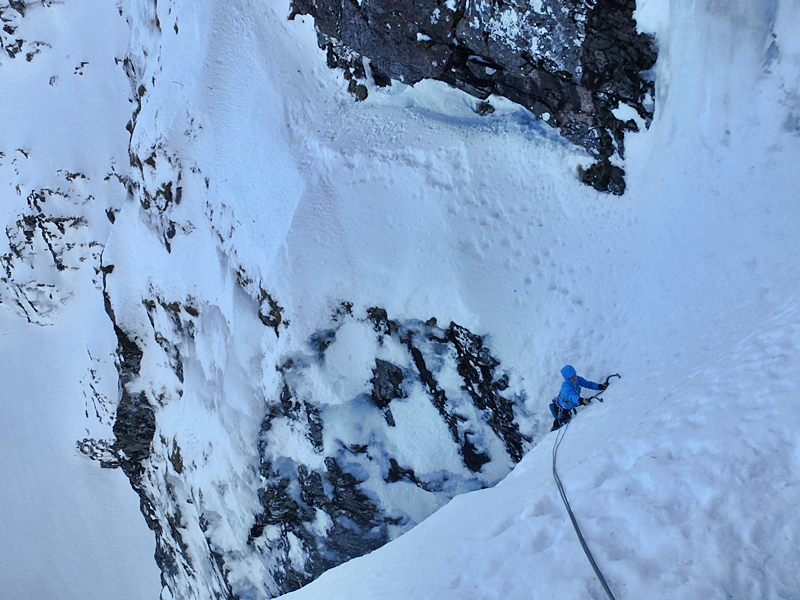 A front-point placed precise on a ripple of rock is a window to intense and through the glass the dark creeps close. Watching the first tooth of a pick wobble on a rock crystal while pulling past it – face so close, eyes wide and focused, the mind like burning magnesium. I felt like a hare. Pushing down, higher above the teetering pick, fishing for a crack high above, while waiting for the pick to rip and my wasted body to rag. Hunting for something to pull-up-on in the frozen white water stuck to the crag. Fishing, but catching nothing except disappointment.

Robbo, Pete and I were trying their last great problem on the Gar. At that point I had only had four-hours sleep in thirty-five. Dark was threatening and my mind raced. Three pitches up, after several walk-in’s and two proper attempts over the last two years this was the first time they had stood where we now stood and with all of the climbing beneath us and the climbing  completed clean. One pitch remained between us and success but the light was fading and the stars were threatening and across the rounded snow covered hills, the light was red, time was crimson clock hands. 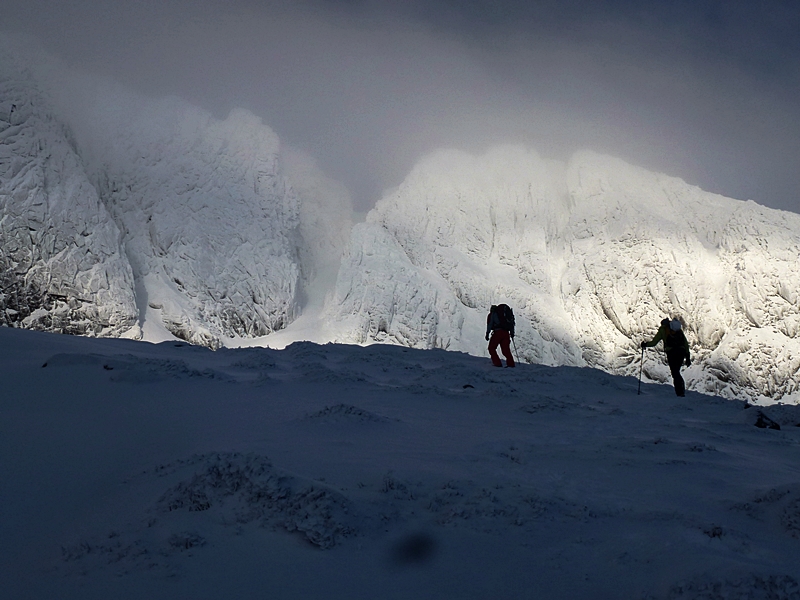 The walk in to Lochnagar. Nick Bullock

The Lecht road had re-opened, it was eleven pm and once again I was passing the tumbling moorlands. Fighting sleep deprivation, the cramps and failure ran through my body and my mind. In the dark we had abseiled off the new route with the final hard pitch still unclimbed. I watched the hares skittering on the snow at the side of the road… ‘Don’t do it, it’s not worth it, life is for living.

In the last twenty-four hours I had watched the sun rising and setting. Witnessed Tawny Owls silently flop and twist through skeletal silver birch. Seen scallops of snow carved sastrugi stretch across the Lochnagar plateau. Watched the clouds cut the horizon while snow storms tracked the Scottish hills and I had been surprised and thrilled with the exploding black Ptarmigan skimming the blue-white hillside. We had failed on the new route… but had we really failed? 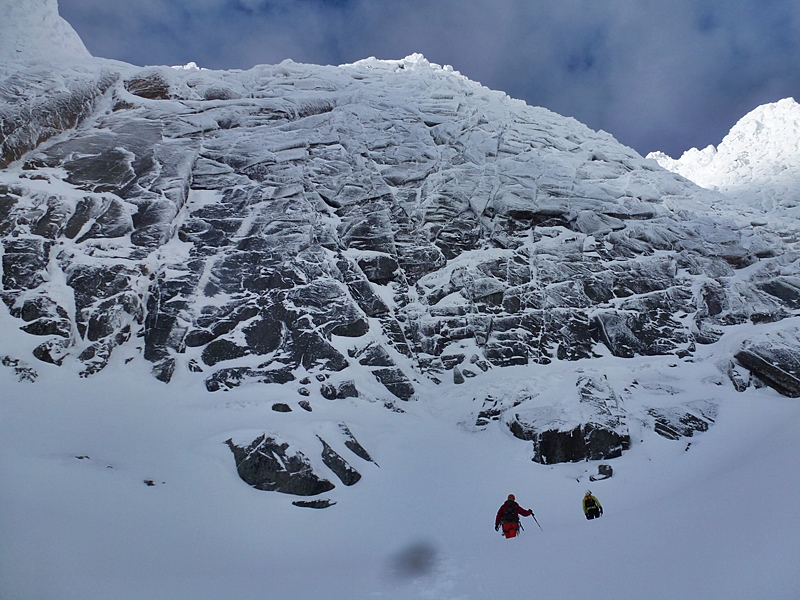 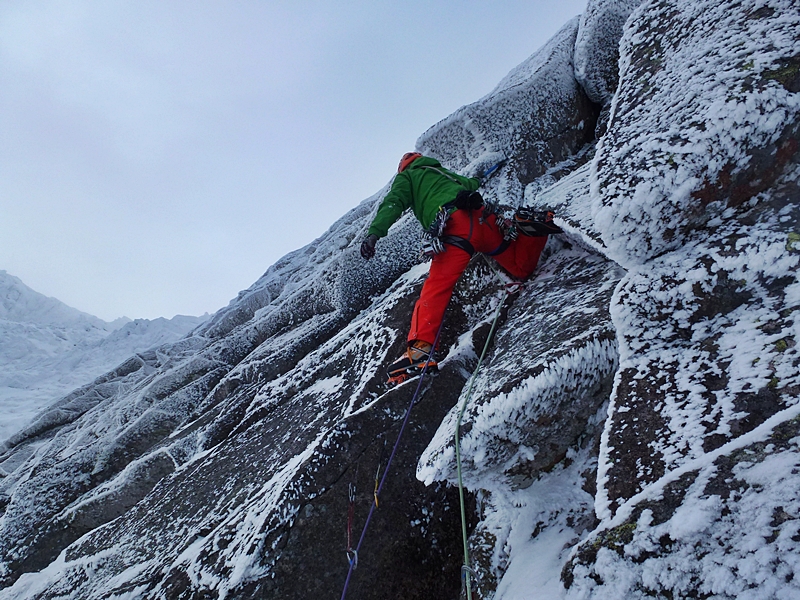 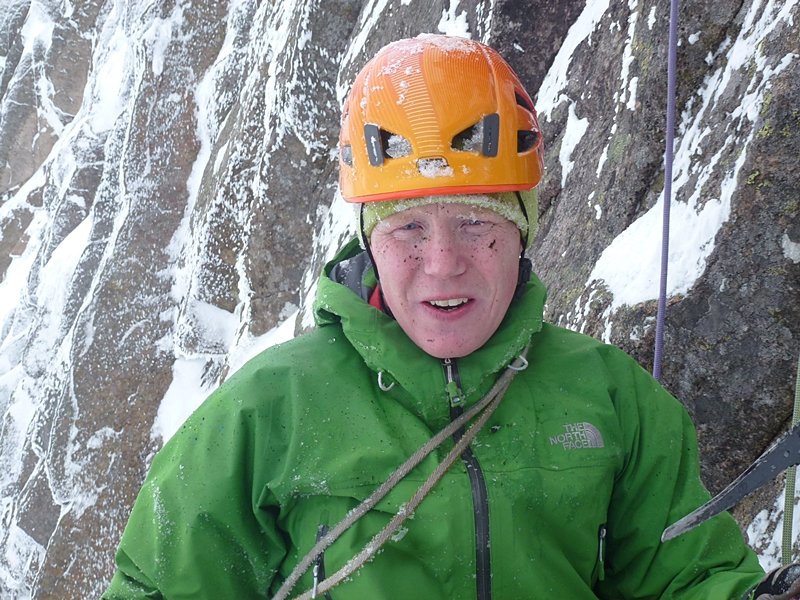 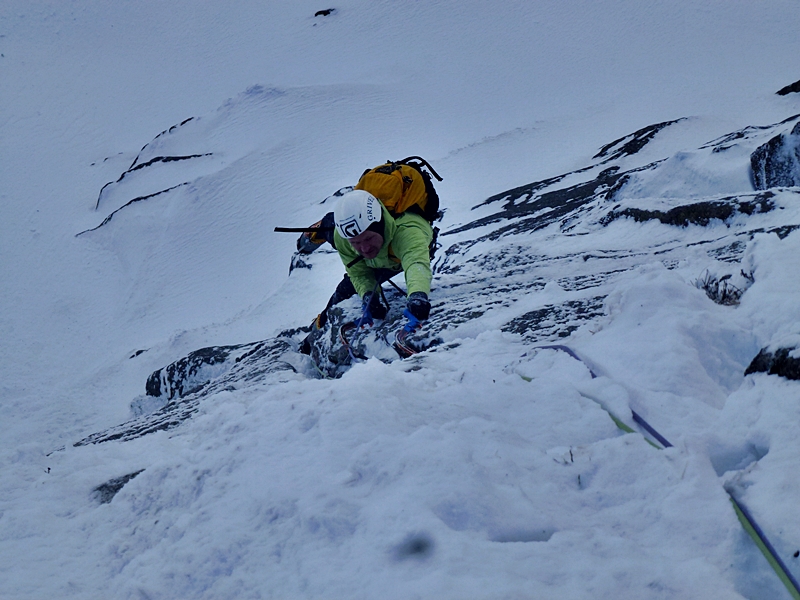 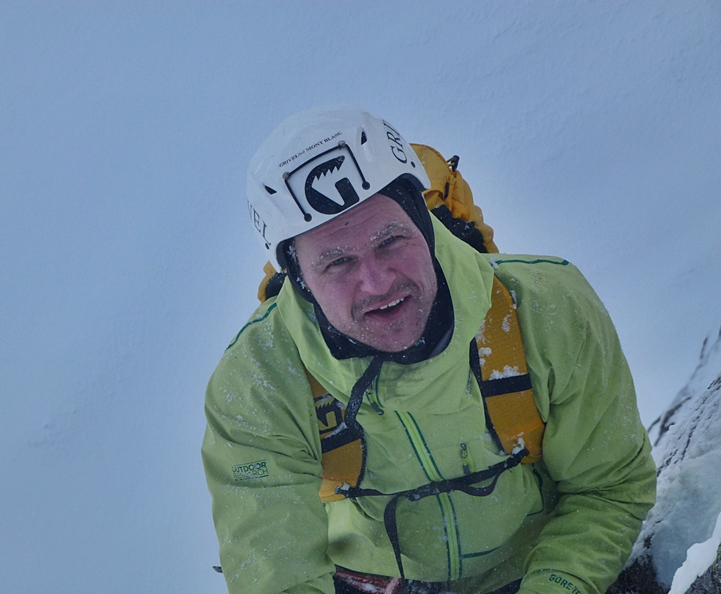 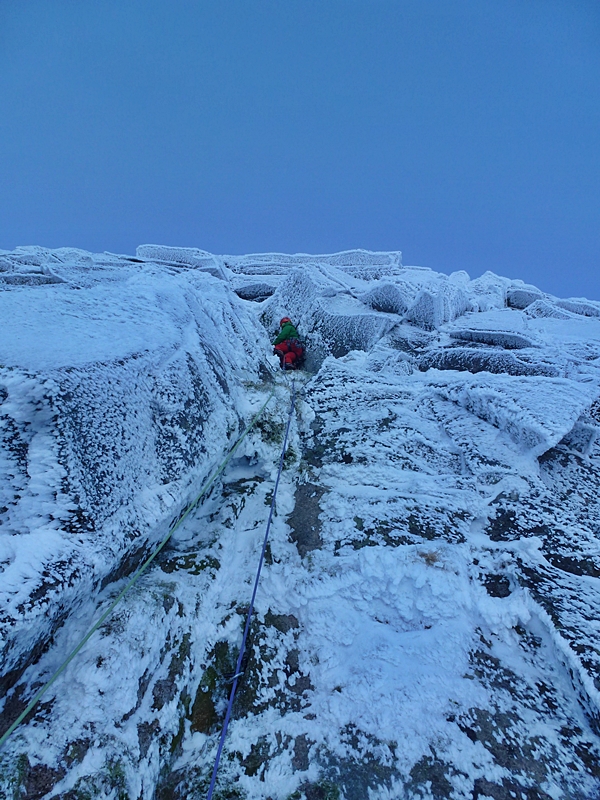 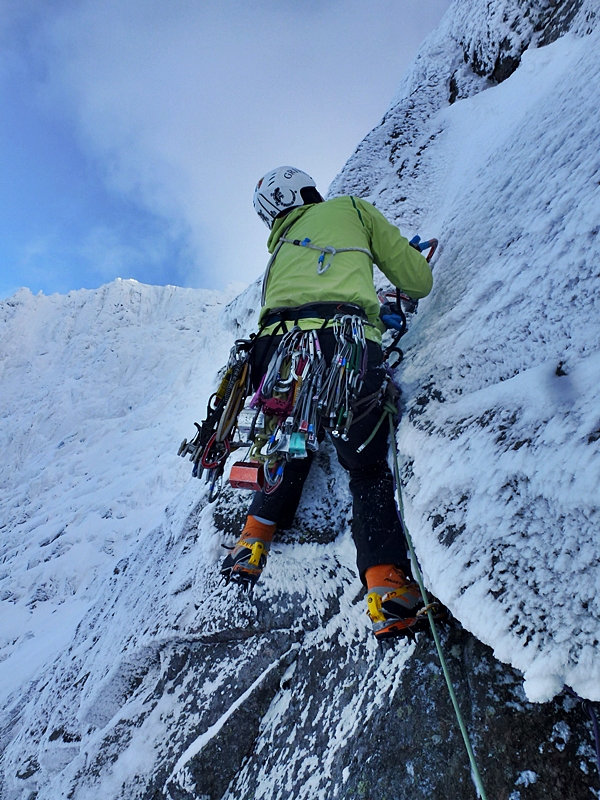 Robbo setting off on pitch four… The red hands of time were turning. Nick Bullock