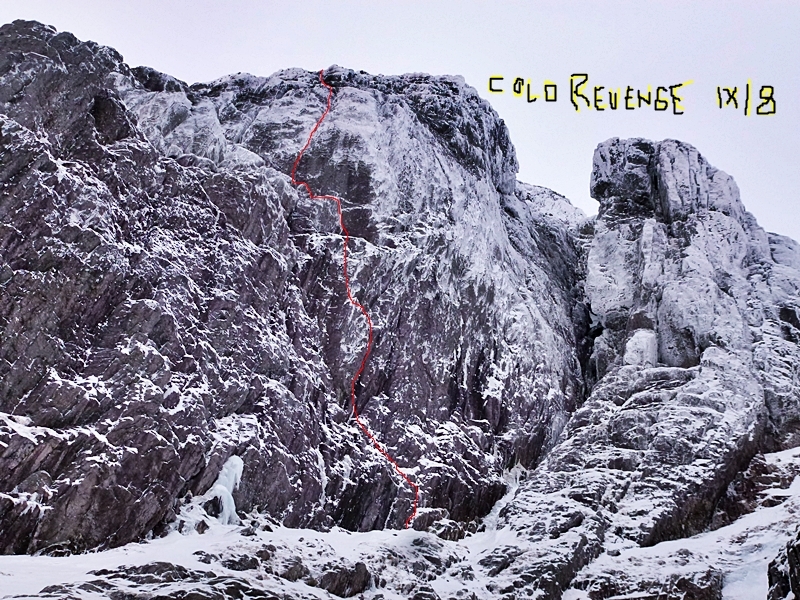 The black and white picture showed. A face. Weary acceptance of what? Did he know? A dark turbulent quiff. Creased eye skin. Face skin scuffed with life’s challenge.

Killed at thirty-six abseiling from a sea stack called The Maiden. The Maiden called … As many maidens do. And Tom Patey gave.

Leaving  The Kingshouse, nearly eleven pm, I stared at the picture. Connection?

Would I put myself into the same league as Patey … No?

I walked from the pub into a snow squall. Flakes caught my brown hair and withered. The orange glow of the hotel lights illuminated a million never to be repeated, gusted like a white sail across bleak Rannoch.

Guy Robertson followed me into the night. We retired to our vehicles for broken sleep.

At four, we woke and by six twenty we stood beneath Buachaille Etive Mor, beneath Slime Wall, Ravens Gully and beneath echoes …echoes of more recent and echoes of past triumph and suffering.

Ravens Gully was a deep chimney formed by Slime wall on the left and Cuniform buttress on the right. First climbed in the summer of 1937 it remained the hardest climb in Glen Coe for nearly ten years. In my minds-eye, I had images of Bonington and McIness on the first ascent in 53. The two spent the night just meters from the top of the gully.

A stance kicked in deep snow. Robbo and I pulled gear from rucksacks. And as I pulled clothes, gloves, hardware… I knew I had forgotten to pack my harness and belay plate. How do I break this to Robertson, a man who has one day a week to climb?

“I forgot my harness.”

Robbo looked crestfallen. Another squall of heavy snow swept across Rannoch. Or was this in my imagination?

“If there is any suffering to be had Nicholas, you’ll be the one having it.”

I didn’t think this was a good time to tell Robbo that on Sunday I had walked into Great Gable in the Lakes, also without a harness. Fortunately on that occasion we hadn’t even unpacked as the wind was strong and standing upright was the crux of that day.

After much pontificating we decided on Bludger’s Revelation a HVS on the left side of the wall which had never had a winter ascent.

I looked across the steep folds of Slime Wall, across at that other HVS to the right, Gurdon Grooves. Gurdon Grooves had always spoken to me and still I find it difficult to believe Robbo, Bayard Russel and me had made the second winter ascent last year, twenty-eight years after the first winter ascent.

To the right again I looked at Cuneiform Buttress and traced the line of Ravens Edge, a climb Michael Tweedley and I had climbed the third winter ascent back in 2003.

I climbed the first easy entry pitch just to see if my ‘harness’ a tangle of two four foot slings cupped around thighs and clipped by snap-gates to an eight foot sling tied around my waste would work. I reached the belay and clipped in … “safe.” It had worked, but I wasn’t sure how safe or for how long it would continue to work for what was to come above.

Robbo climbed the next two pitches of Bludger’s, the first, a steep corner groove with perfect hooks and even better gear and the second a serious and committing test of nerve, pick friction and a detached block he became intimate.

It is at this point pitch four of Bludger’s goes right to follow steep slabs around the corner. I took a look and thought, ‘bugger that’ and ran up some very nice flakes to the left. Just the type of pitch for someone sporting a harness made of thin slings and held together by snap gate karabiners.

Unfortunately I was now belayed beneath a forty metre pitch of E1 5b called Bloody Crack and as we were climbing in blocks this would also be my lead unless I could convince Robbo he needed to do this pitch.

“I think this pitch has your name on it Guy.”

“I think this pitch is your second lead Nicholas.”

As I pulled the steep start to the climb it soon became apparent that Bloody crack was not really a crack of true crack character. It was more a thin shallow groove system with small edges to place picks and lay-back. Good footholds were the salvation which kept me moving up, but at about half way the impostor crack turned into exactly what it looked like from below, a steep groove with not a lot of positive – no positive footholds, no positive gear placements and no positive pick placements. Connection.

I placed my head against snowed up rock. I smelt earth, rock, the metallic tang of closeness. I saw Stag deer in the van headlights at the roadside – peeling antler felt, yellow eyes, a beating heart pumping rich oxygenated blood. I smelled fear. I saw seriousness. ‘Why did winter appear to be going on forever this year?’

Several creeping moves higher, the gear as marginal as the pick placements I felt a sling fall down my thigh and all I could think about was falling thirty foot and castrating myself. This climb had become very serious, and just because I was called Bullock did not mean I had to literally live up to the title.

For one of the first times in my life I actually took the time to dig and try to find some gear that would hold a fall and stop me from unofficially ending the chance of having children. Don’t get me wrong, I really don’t want to be a father, but I really didn’t want to do birth control by testicular strangulation via four foot sling with Guy Robertson as my savour. The pain would be horrific, but the thought of Robbo doing a check for injury was terrifying.

After about thirty minutes of scraping, a perfect wire placement appeared which had me throwing a party in celebration of staying in contact with my gonads.

The final section of the groove was much as it looked, unprotected and technical and the final mantel onto the ledge required a match in a patch of millimetre thick moss with a sideways pick used as an under-cling.

Robbo reached my stance and climbed direct to the top via a satisfying grade V/5 pitch which was new and felt deserved.

Guy was in-front down climbing the gully. The setting sun cast hues on the snow covered hills and I felt truly connected.

Cold Revenge IX/8  Six pitches, Guy Robertson, Nick Bullock, 27/3/13 – a combination of the first three pitches of Bludger’s Revelation followed by an easy link pitch to beneath Bloody Crack, which is climbed and followed by a new fifty metre pitch to the large ledge below the summit. 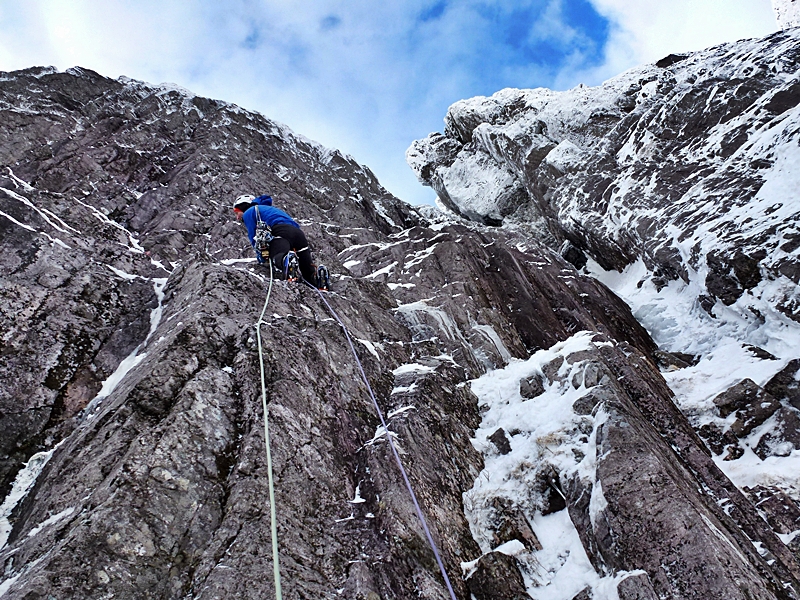 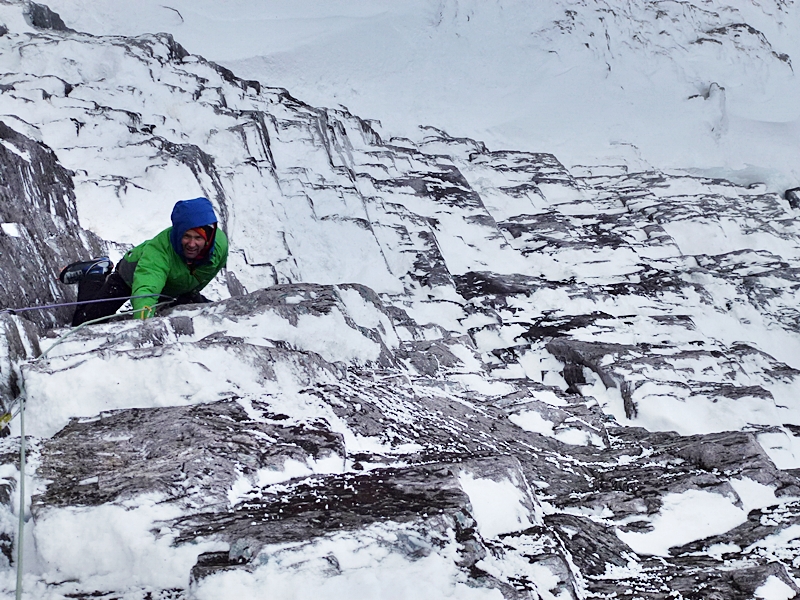 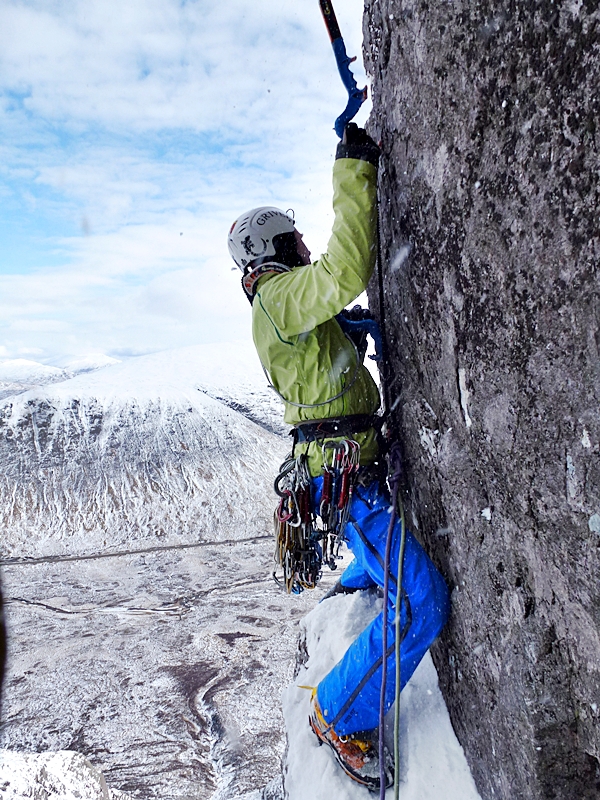 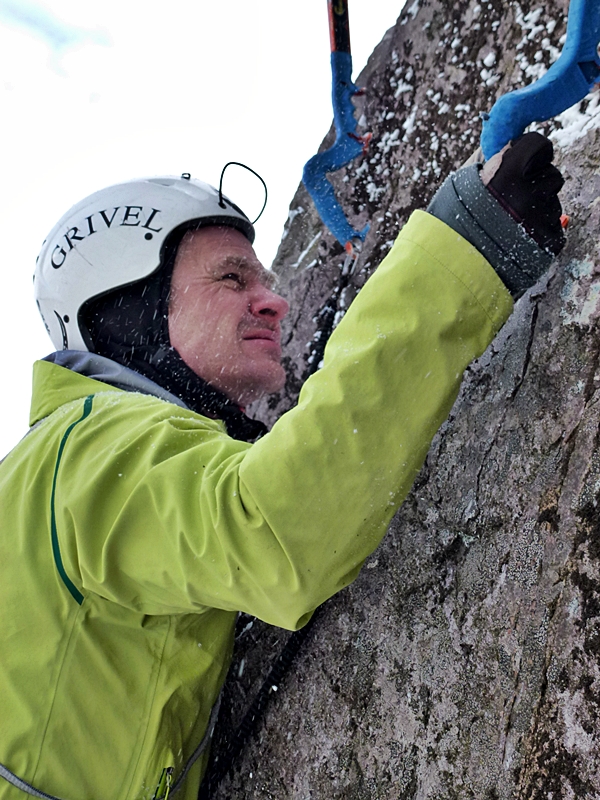 “I don’t really want to go out there.” Guy Robertson not liking what he’s finding on pitch 3 of Bludger’s. Nick Bullock. 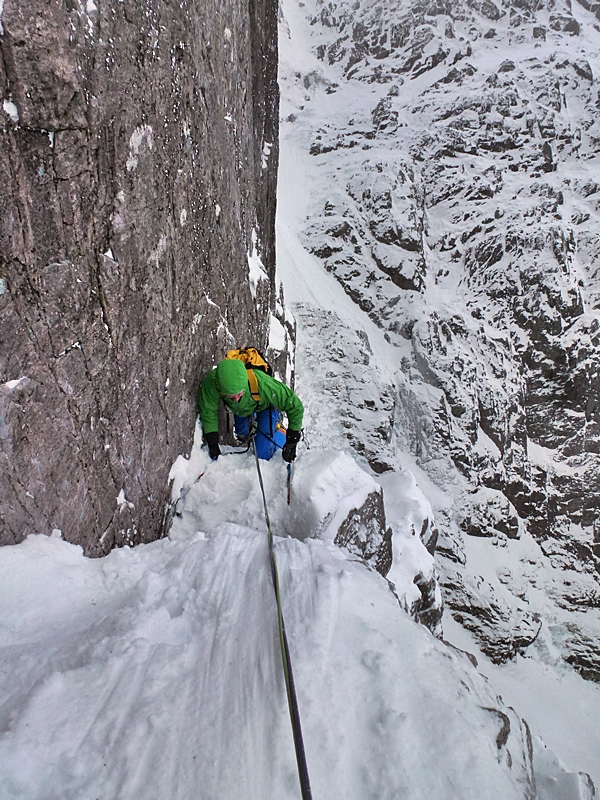 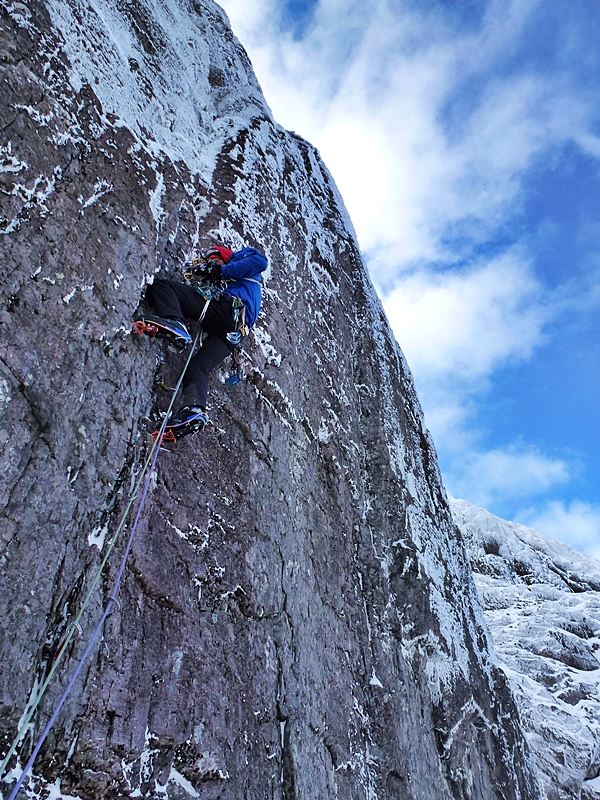 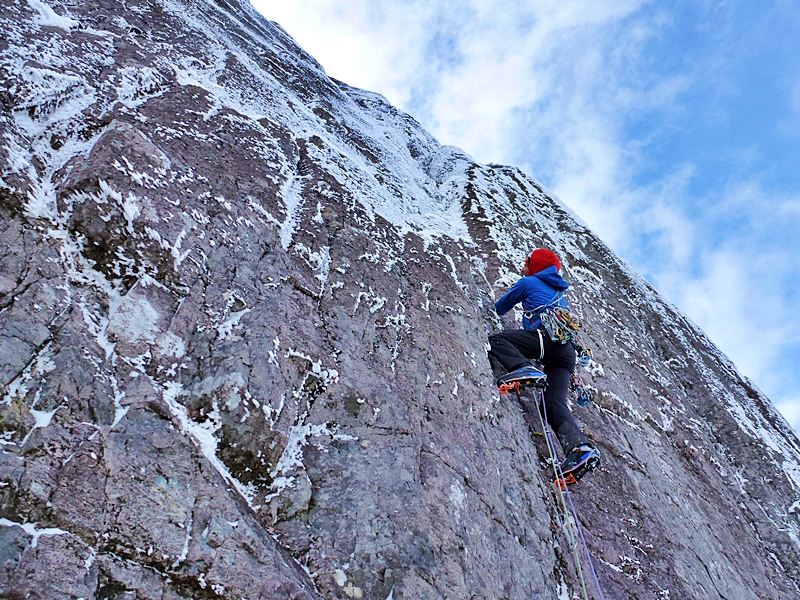 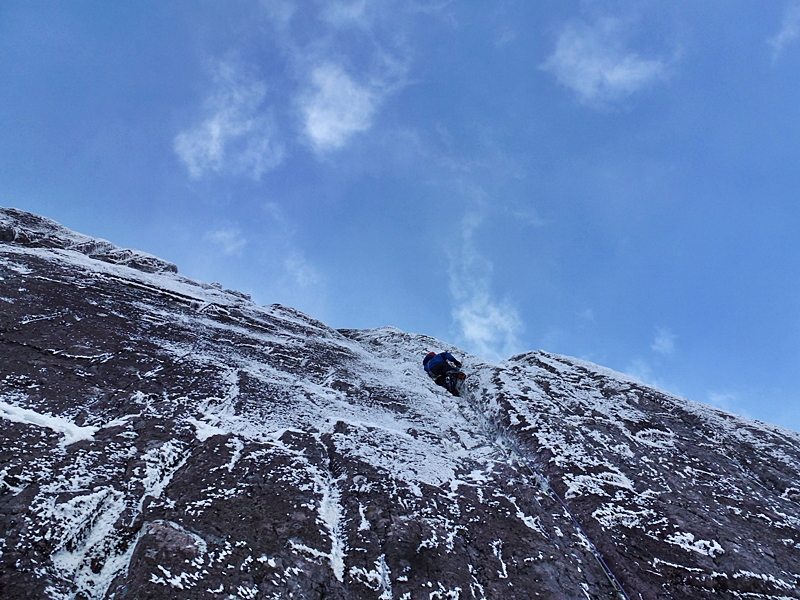 Nick Bullock on Bloody Crack. This was the point I started to think that modern methods of contraception were very favourable from the method I was looking at taking! Guy Robertson. 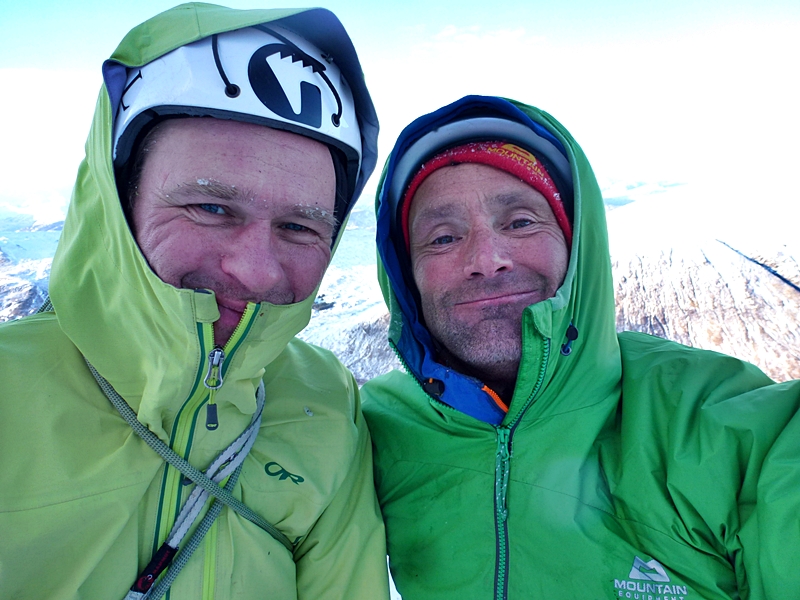 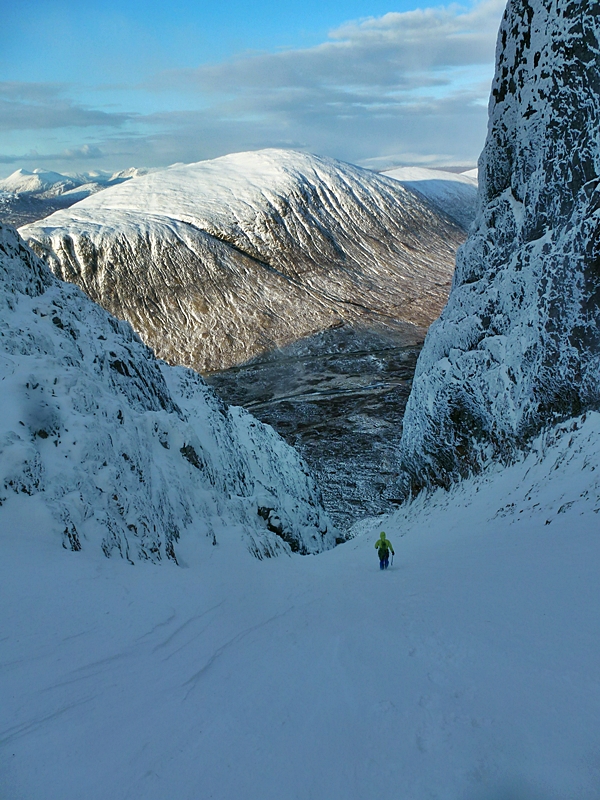 Guy Robertson on the way down. Nick Bullock