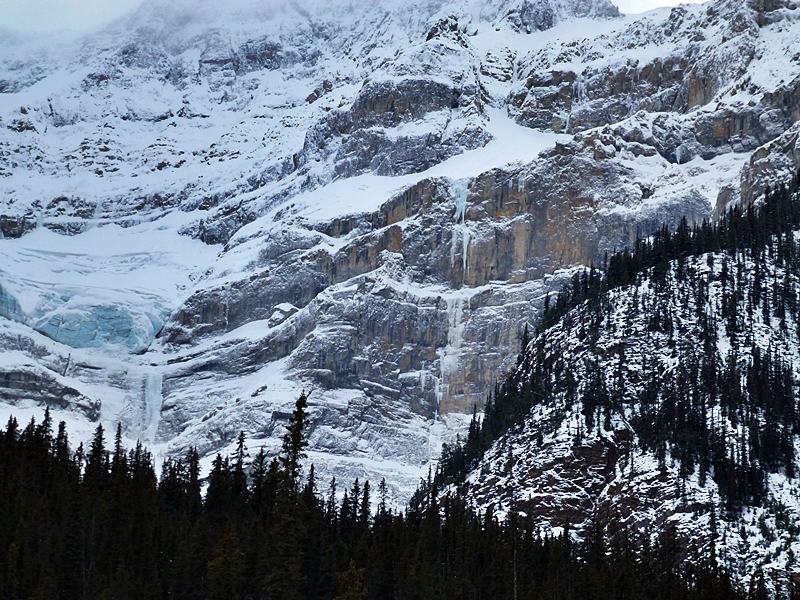 Rocket Man: M7+, WI5+, 350m. The line of daggers running up the centre of the cliff to the right of the serac.

Once again I sit looking out of the Canadian Alpine Clubhouse window. A red squirrel, slim and elastic, bounces youthfully along the wooden decking. A freight train trundles the tracks that run parallel to the road leading into Canmore. Row after row of old hoppers are dragged behind the two tractors. Some are painted, but most are rusty.

An eighteen hour day has taken its toll. My body feels as rusty as a hopper and as drained of cargo when it is emptied at the port. But my mind is loud like the freight train horn.

Dave Thomson, Kefira Allen, Eric Dumerac and Raphael Slawinski’s Rocketman on Patterson, first climbed in March/April 1999, is up there with some of the most sustained climbs of the type I have been fortunate enough to climb. Sitting here in the warmth of the hut, looking out across the pine, the roads, the hills, the snow – my mind flits from Sea of Vapours, Man Yoga, No Use Crying, Riptide, Nemesis, Polar Circus, Whiteman Falls and Terminator. Each of these climbs has a place in my memory.

Sleeping in the car, the night before the climb, I listen to the wind. I sense the emptiness of The Icefields Parkway. The long icy road is running away from where I lie. The road is always running away.

We crossed the river by hopping on icebergs. Stepping over fallen trees. Breaking the perfect cover that insulates the meadow. And the steep snow moraine which is a bastard – one hour and forty-five minutes of walking. I remember the five and a half hour thrash from 2008 when Parnell and I climbed Riptide, but this time the walk is soon over. Following the Youths steps in the snow helps.

Climbing begins at eight, like getting up for school.

Nine pitches – fat ice, thin ice, cruddy ice, unconsolidated snow, hard dry tooling, dripping daggers of clear frozen water, rotten rock. Images of Jon Walsh ripping a bolt when he pulled a hold are strong in my minds eye … and that descent –  that descent had too many sideways abseils over hanging cliffs. Shining the beam of my headtorch while spinning on a thread my body aches with tension. I’m unable to see the end of the rope.

Back at the bags at the base of the climb for nine pm.

And arriving at the quiet Canmore hut with lights left on at one-thirty.

Bed at one-forty-five is to the sound of heavy freight trundling along the tracks.

And I fall asleep wondering where and when those rusty hoppers will reach the end of the line.

Thanks to Ian Welsted for the picture of Rocket Man that fired us up. 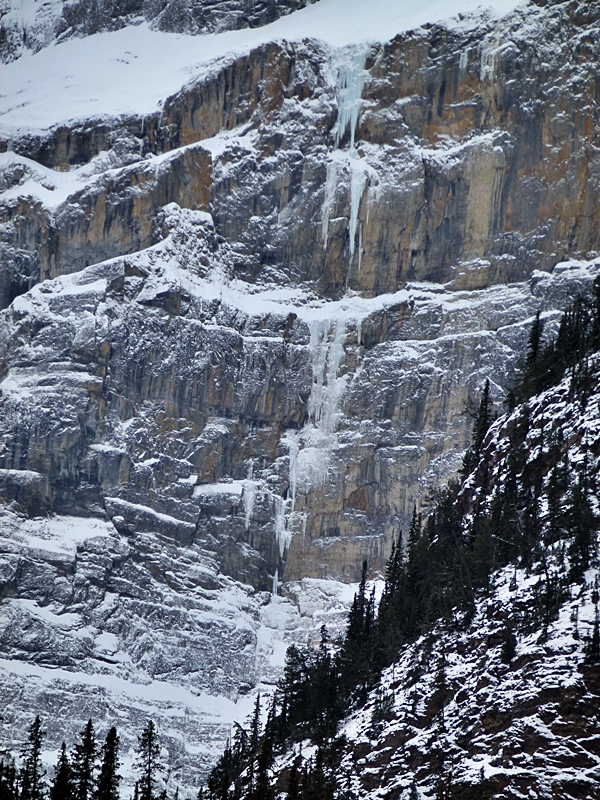 Rocket Man. “The ice is as fat as it gets.” Raphael Slawinski. 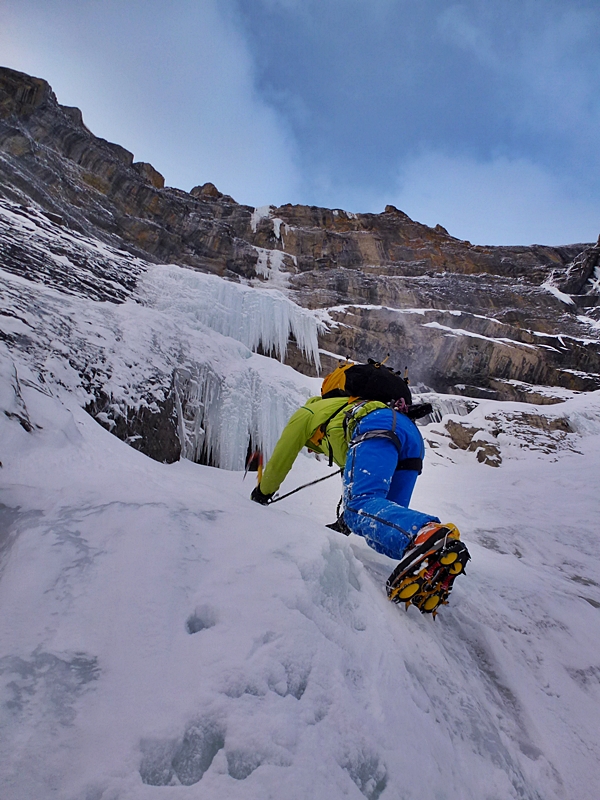 Greg Boswell getting us going at the start of the 350m route. Its like getting up to go to school. 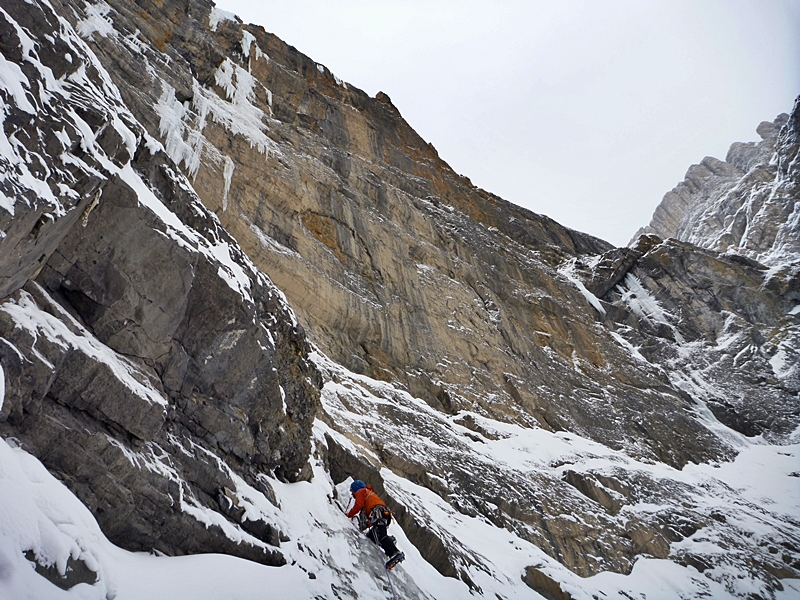 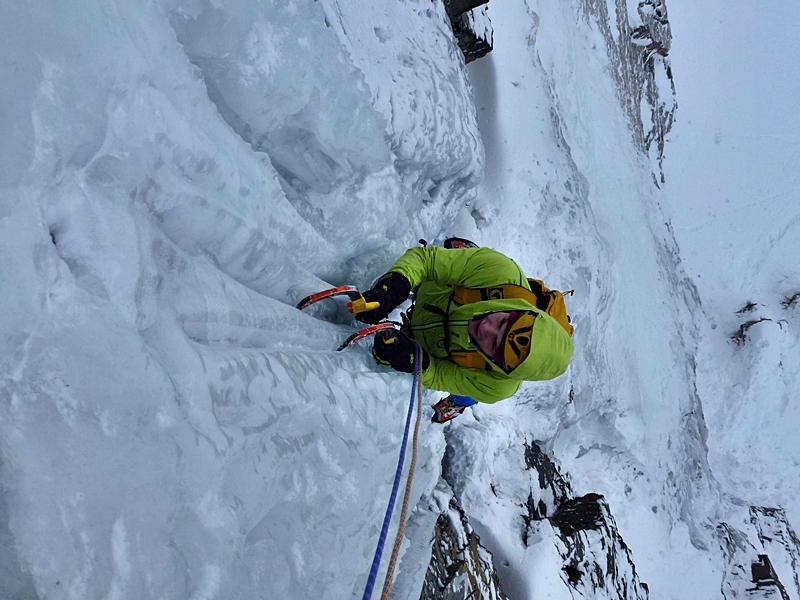 Greg Boswell following the second pitch. I climbed too far but given the quality of the ice, I’m glad I did. 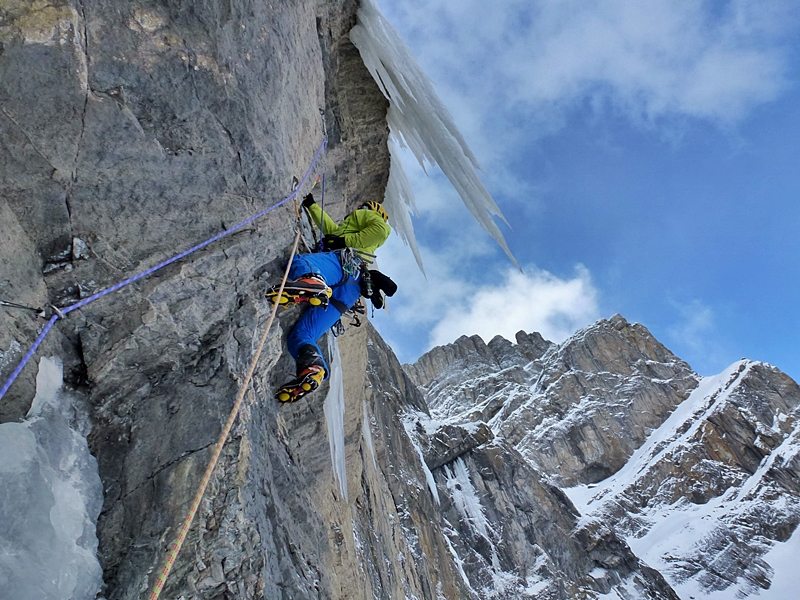 Boswell strapping it on to the M7 mixed pitch 3. 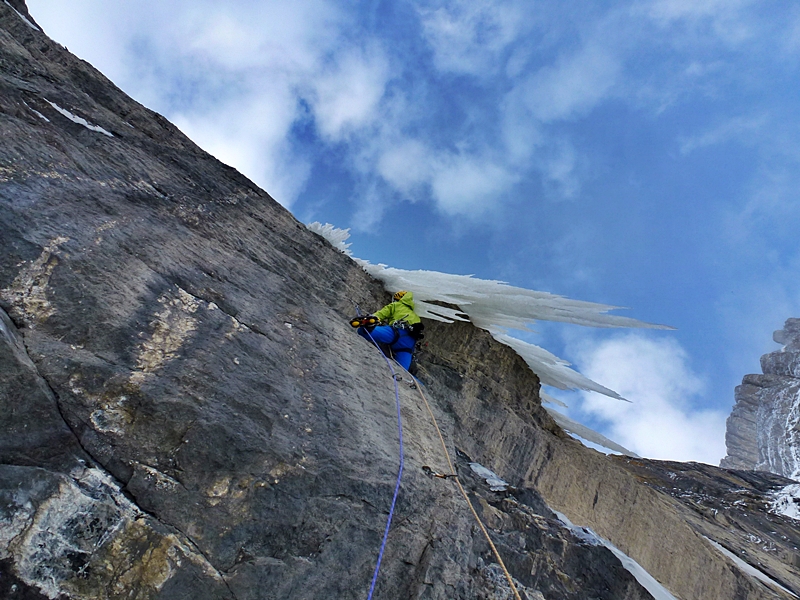 The icicle was good for a rest, well until you had to pull onto it, but the knee bar behind it made it even better! ‘A route with a knee bar is a righteous route.’ George Smith. 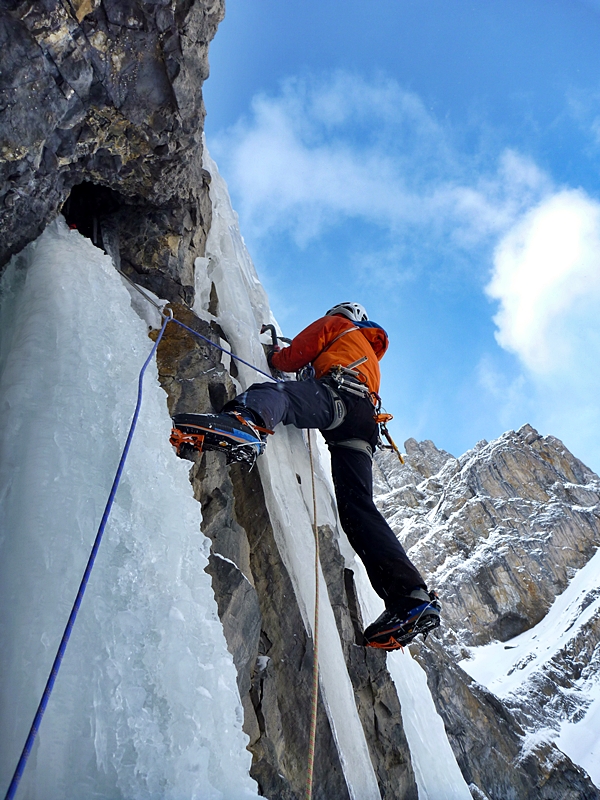 Nick Bullock setting out on pitch four. The Ice was a tad rotten to start but breezy after. 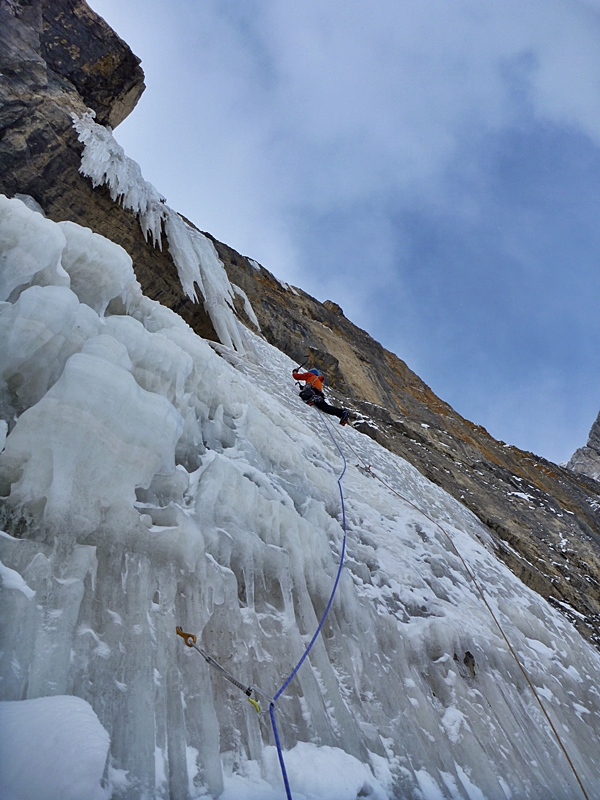 Nick Bullock climbing thin ice which by-passes some of the mixed. It was ok as long as gear is not your thing. 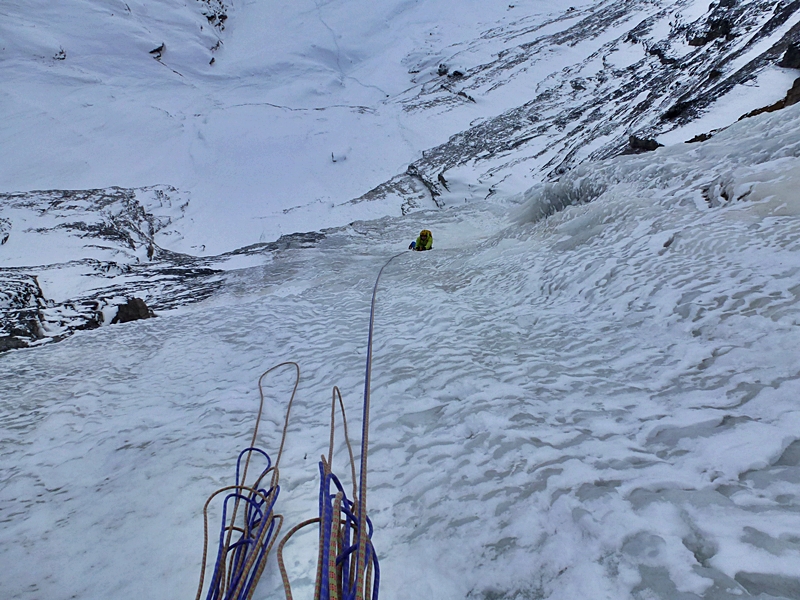 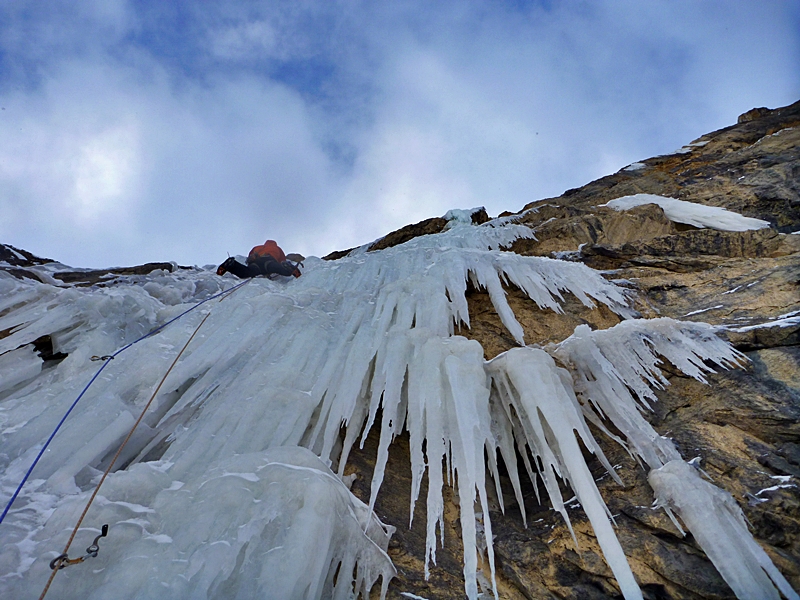 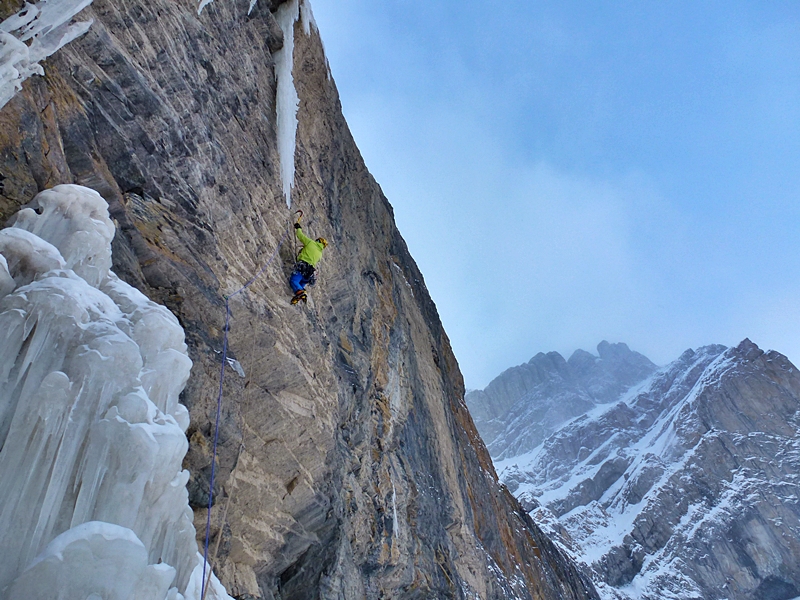 Here we go again. Lets play to the teams strengths, I do run-out ice while the strong youth does, strong! pitch 7. 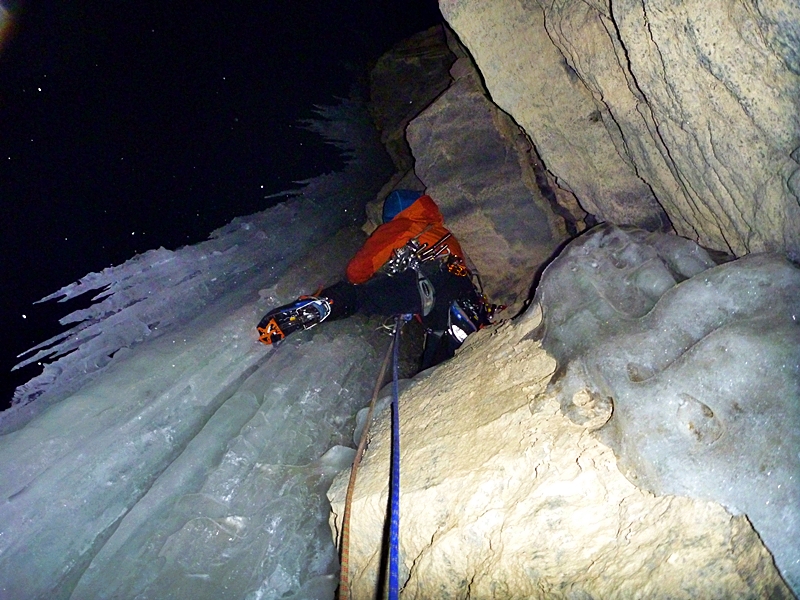 Pitch 8. It was now dark but with only two pitches left we couldn’t just stop. Nick Bullock about to head left. 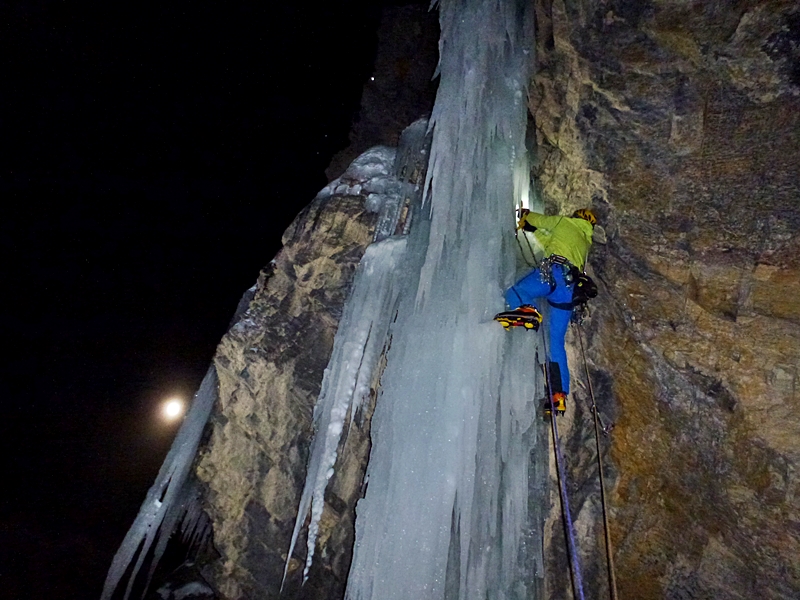 The moon looks on as Greg Boswell climbs the final, ninth pitch of Rocket Man.