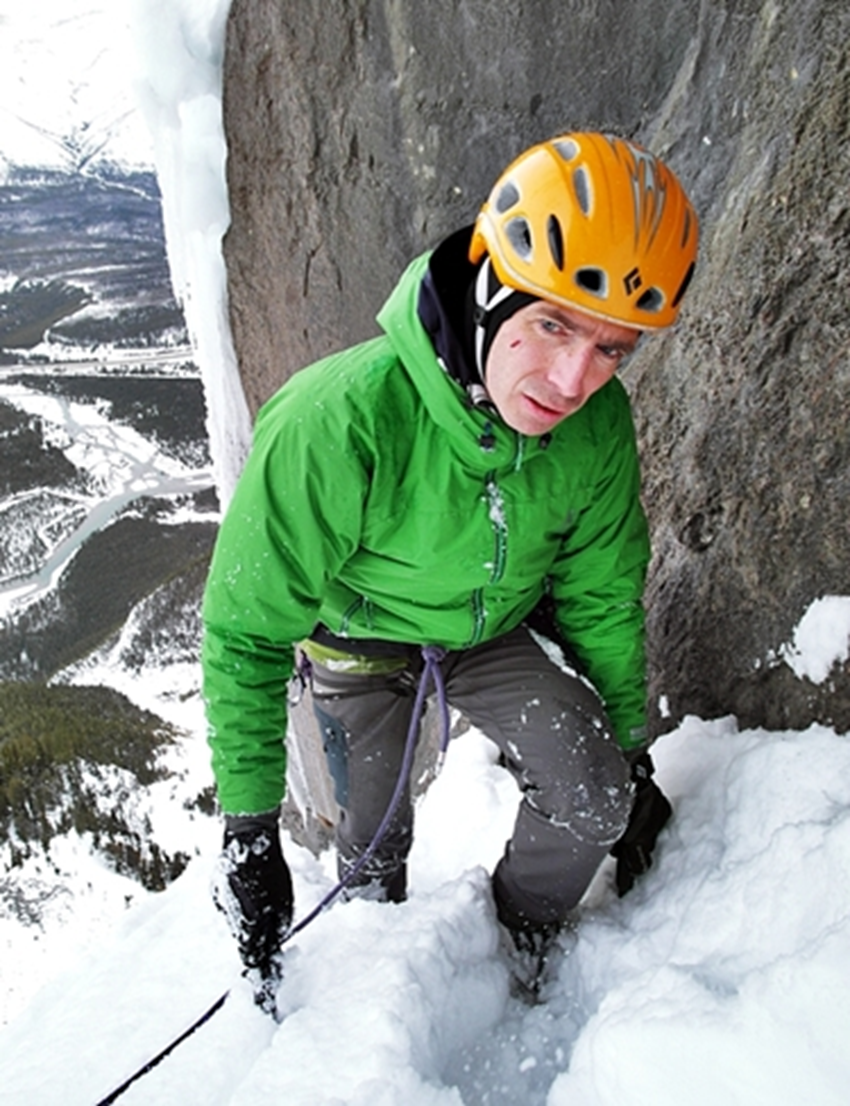 Raphael Slawinski from my previous trip to Canada. He is approaching the belay after Rob Greenwood, Raphael and myself had climbed the second ascent of Exterminator on The Trophy Wall, Rundle, which was actually a Slawinski route! I had belayed using an ice V-thread Raphael had made three weeks earlier on the first ascent and a stubby screw. He saw the screw belay and said, “Ah, a stubby in the belay, novel”

Walking the zig zagging snow trail into The Stanley Headwall, a trail that has become almost as familiar to me as The Ben Nevis track, we pass through the burnt husks of pine scorched by summer fire.  Greg Boswell and I, each in thoughts of our own. A head torch existence.

The massive silhouetted baulk of The Headwall dominates to our right.

The Headwall for me represents big multi-pitch adventure. This is my favourite type of winter climbing. But today in the lean ice conditions we are after a two pitch variation on a climb I still long to complete, Uniform Queen. The climb is Victoria’s Secret Deviation, first climbed by that man again, Raphael Slawinski. I know this line appeals more to Greg than me because of the published pictures of Raphael on the route and I’m sure because of the reputation the climb has for technical and sustained difficulty. This must inspire a young driven mind?

My interest in climbing Victoria’s Secret is not as piqued as Boswell’s. Even so, I am not out for an easy ride today. I have already said that I would like to lead the main pitch as the style of climbing sounds everything I relish, so who-ever goes first, will then abseil and strip the pitch in preparation for the second round.

I suppose my interest is even more heightened knowing Slawinski and knowing how well he climbs. He gave the pitch a grade of M7++ and basically what that means is, difficult. The fact Slawinski fell three times while attempting to make the first ascent, on the on-sight, is particularly daunting, but anyone who is a part of this totally irrelevant and somewhat pointless practice knows, the person up there the first time has a whole load of voices and barriers against them.

In winter climbing on traditionally protected routes and certainly routes that heavily feature cracks, it is easy to forget that as the climb becomes more travelled it also becomes easier. The gear is easier to spot and place, the pick slots clean out and the mono-point placements become worn and easy to see. Victoria’s Secret Deviation has seen some action but not a lot by any means, so it would be an interesting exercise. And in a way, for the first time on this trip, that was how I was looking at the day, it was exercise. Certainly for me, climbing a two pitch route was not going to compare with the likes of Rocketman, but to be honest, after Rocketman, I was relishing the thought of not climbing the whole day and into the dark and into temperatures of minus 18.

Standing beneath the route Greg and I scissor, paper, stoned for who was to be first up on the main pitch. Greg won. This was the best result I think as like I said, I was not that bothered. This has generally been a theme of my climbing, summer or winter, because in a way I’m quite laid back and there will always be enough to go around in the long run.

Victoria’s Secret as far as we both knew had only had two ascents, one by Slawainski of course and the second by that winter hard hitter and under the radar,  well as far as Britain is concerned, Jon Walsh. Walsh had fallen at the very top of the main pitch so the route had never had an on-sight ascent.

Greg took to the challenge well and soon was half way up the pitch that reminded me a little bit of Left Wall on Dinas Cromlech in the Llanberis Pass, North Wales. (Don’t worry, I’m not about to try this in winter people)

And after an hour or so, maybe it was more so than an hour, Greg made it to the top for the first on-sight and third over-all ascent.

This is possibly the first time in my life I have been involved in something like this in winter. My head was shouting insistently and saying what it usually does in similar situations but these situations are normally in summer, it was saying, ‘oh don’t be so petty, just second the pitch to save time and effort, you will have climbed it no-matter whether on lead or second’. But for once I refused to bow to the more sensible voice and allowed Greg to strip the pitch.

The first moves from the belay were tricky and insecure. The thread of doubt needled through my brain, but once I pulled onto the wall the fears subsided as the hooks were solid and the gear was good. Footholds, pick placements and planning was obviously going to be the way too getting up this thing clean and soon my mind warmed to the situation. Greg shouted beta, in a way he didn’t need to as it was obvious what to do, but I didn’t mind and there was no way I could call my ascent an on-sight anyway.

I steadily made move after move. Most of the climbing was very secure but there was a point at about half height where the good feet placements ran out and the pick placements were first tooth torques in the shallow crack. This in itself would not have been bad, the wall was just off-vertical, but the wall bulged and for the first time, hard pulling with feet on small edges and placed high was necessary. Several times through this section I pulled my head level with the pick imagining it exploding and hitting me in the face.

Moves had to be constantly planned and the higher I climbed the more scared of falling I became. It wasn’t because I was going to fall a long way, I just didn’t want to mess it up and the thought of Greg down there, wrapped in two jackets and glowing from his clean ascent, made me even more scared. It wasn’t a competition thing, he felt great about his climb and rightly so but possibly, if I fell, it would dampen his celebrations.

Tiny calcifications for feet, single tooth torques, cross over axe moves, balance, balance… time ticked, the climbing left to the top decreased and the more embroiled I became. Snow was falling, sticking to the rock, resting on the tiny edges.

At last, the very last move before a low angled snow gully and it was the typical Headwall scrape, catch, pull and pray with knees pressed to a ledge. This move was so easy to blow. My body trembled. There was so much tension running through it and the tension running through my brain was more. Three times I went to make the move and reversed, I was so afraid to mess it up but at last I committed and by good luck and maybe some skill, I didn’t fall and the groove was under my feet.

Walking out, the dark was engulfing once again and the snow steadily falling settled. Inside the yellow beam of my head torch I was contemplating.

No, Victoria’s Secret was not a nine pitch adventure, but it was an adventure and such a beautiful technical climb, which thanks to the vision of Raphael by not bolting it, it would stay up there in the memory as if it were something bigger and longer. 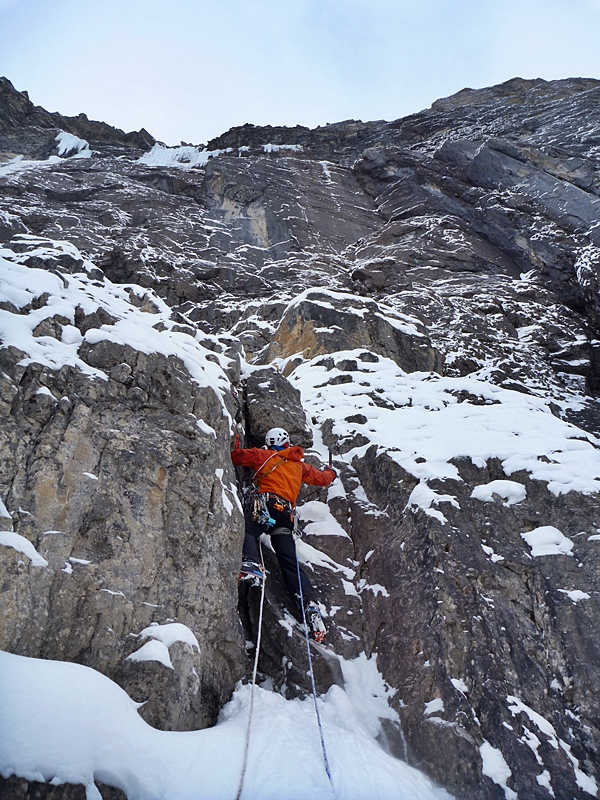 Nick Bullock higher on pitch one of Uniform Queen with the wall looming. 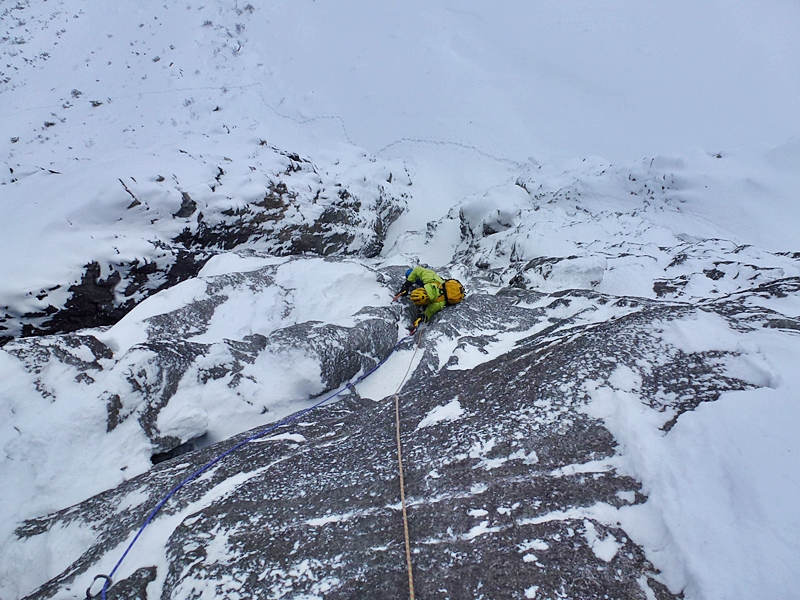 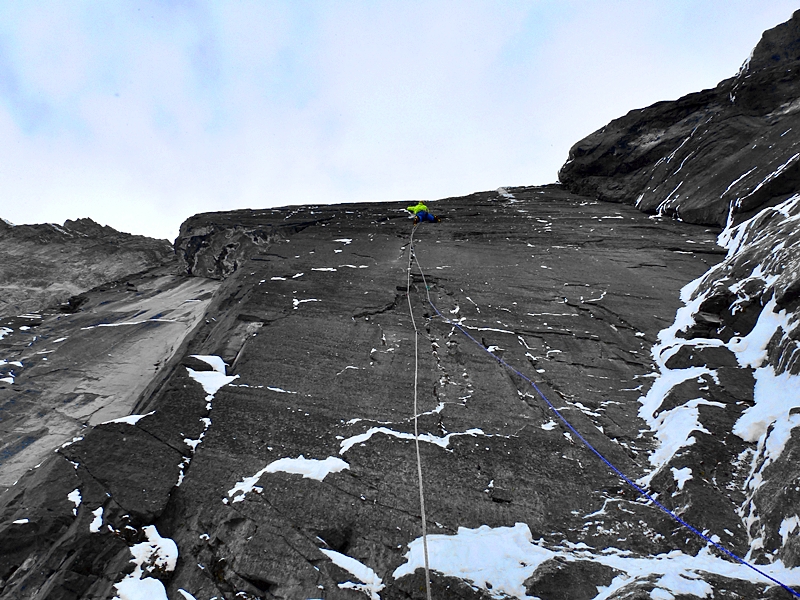 Greg on his way to making the first on-sight of Victoria’s Secret Deviation. 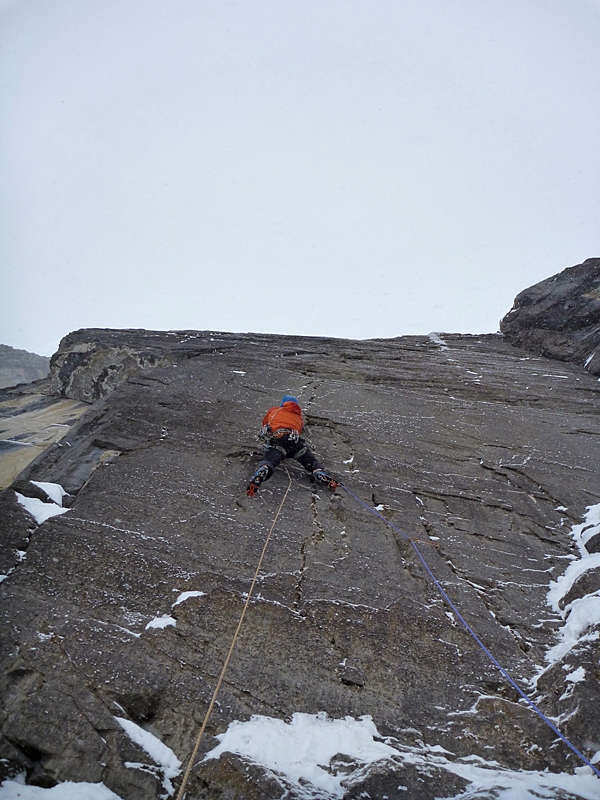 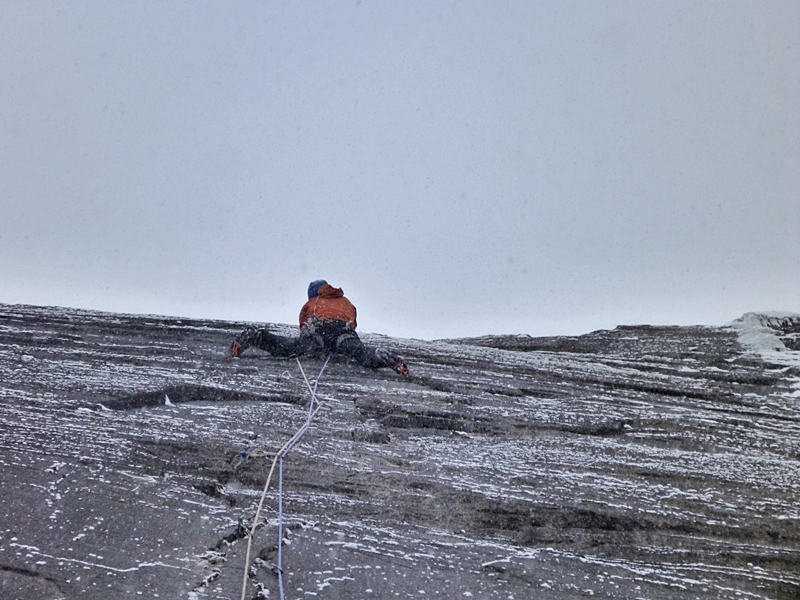 Nick Bullock trying not to shake, or breathe. Getting more nervous with every move up!