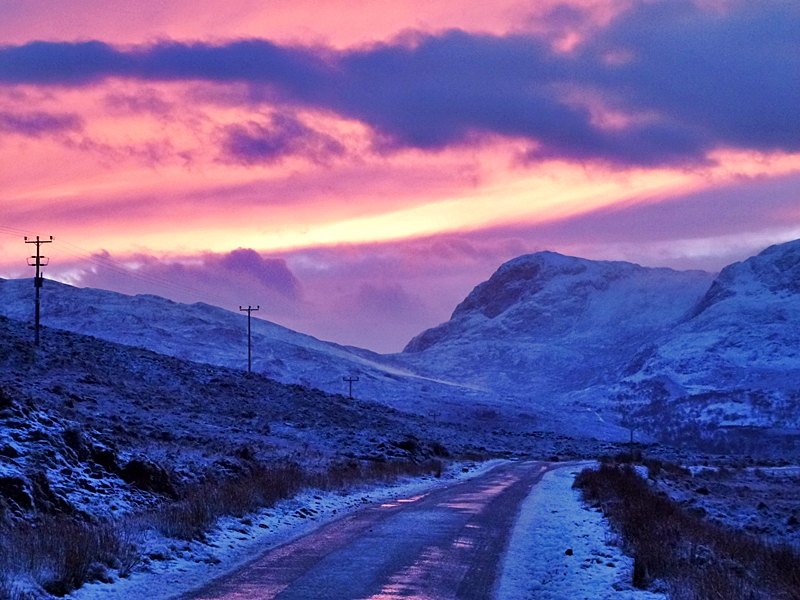 The rain… The bloody rain … it poured. And poured.

I was running along Cormac McCarthy’s, The Road. I felt separated in this post-apocalyptic highlands.

I had walked into four different crags in the week and walked out again. The bag remained unpacked. The most memorable and inspiring part of the week’s failures had been the 5am battle to reach the Cairngorm Plateau. Driving snow and gales. Whiteout. What the fuck had Robbo and me been thinking? In the beam of the headtorch I picked out a white carrier bag blowing in my direction. It was only when it tumbled nearer I realised it was a Ptarmigan, being beaten by the wind.  Her wings so used to being strong, carrying her body ,flapped like polythene. She clawed to snow and found purchase and hunkered down a metre away. I shone the torch. Her dark eyes blazed survival.

I sat in my van on Morrisons car park watching people leave the train station and meet loved ones – a wet, close, loving embrace in the pouring rain. Closeness.

Heading for the underpass toward Fort William town centre – rippled and stirred by the wind, I avoided the large puddles. My mood was grey and dark. It had been too long since the last climb and hanging in wet Scotland made me dour – I had too much time to think.

Streams of water poured down the tiles on the front face of the underpass. The inside was lit, almost dazzling compared to the nether world outside, music echoed and begrudgingly filtered outside and into the gloom.

Buskers stress me, if I don’t add to their guitar case, hat, cup or whatever receptacle they use to catch change, generally I feel embarrassed and guilty but maybe that’s me and my prejudice – maybe busking is like writing and climbing, you need to be heard or read or actively involved no matter the pay, the piece of prose, the song, the grade…  but somehow I doubt it, I’m sure many buskers busk out of necessity?

This busker was in his fifties, a medium sized guy – wax jacket, bit of a belly, flat cap made of tweed, grey complexion and a life worn and weary face. He played an acoustic guitar and his singing and playing was really good. Emotion stirred deep into the pit of my stomach. I wondered why he needed to busk, what had gone wrong? His eyes were bright and sharp, eyes that also stirred something in me – something that punched me in that hollow self-pitying gut. I placed a few coins in his guitar case and looked him in those eyes. Swinging the guitar from side to side – strumming, singing – he gave me a nod and a knowing smile.

Walking from the underpass, back into the rain, my mood felt lighter. I made a pact with myself to stop wallowing in self-pity and raw emotion and to cheer up – there was always a glimmer of hope and the small un-noticed things of life, like the Ptarmigan, bring some relief.

Walking back from internetting at Whetherspoons, along Fort William high street, a young boy sat in the doorway outside a shop licking a sherbet lollipop. He looked like the lad from the front cover of a Roddy Doyle book called Paddy Clarke ha ha ha – blond, skinny, very cheeky, his whole life ahead of him. ‘Lucky bugger’ I thought.

The first day of the BMC Winter International meet, the forecast was atrocious. What to do? My mood was once again sliding, but I thought of the busker, music, life, love, the cheeky young boy and the Ptarmigan and I knew life was a curve ball –  lows and highs, rights and wrongs, shit happens, sometimes times are good, sometimes it rains – this is what makes life, life, and this is what makes the good times good.

Canadian, Jon Walsh and I, walked in, checked it out and the following day climbed the third ascent of Extasy on the Pinnacle Face of Craig Meagaidh. Its difficult to imaging that I will have a more compelling, engaging day of the winter than this one. We climbed the route totally on ice but the ice was less than perfect and the ground at times was steep. The gear to protect the climb was minimal and the descent ‘interesting’… All in all, a pretty full-on day. 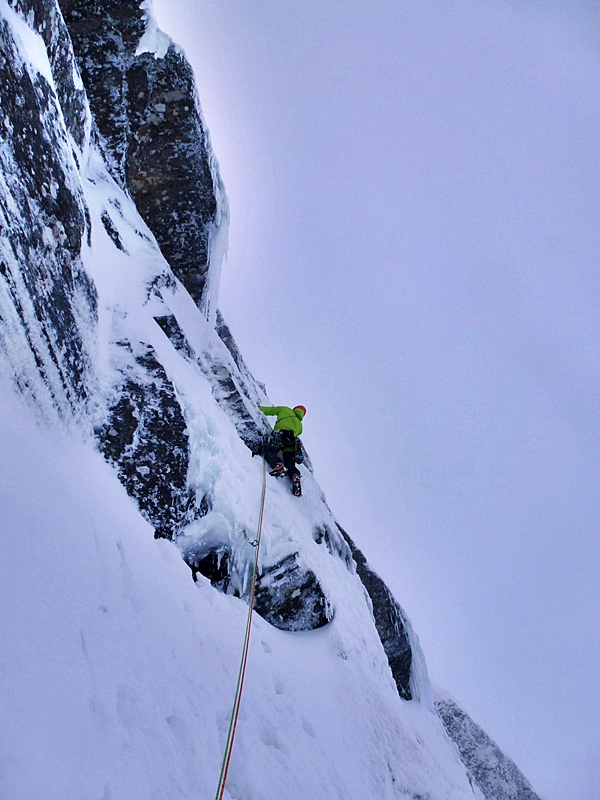 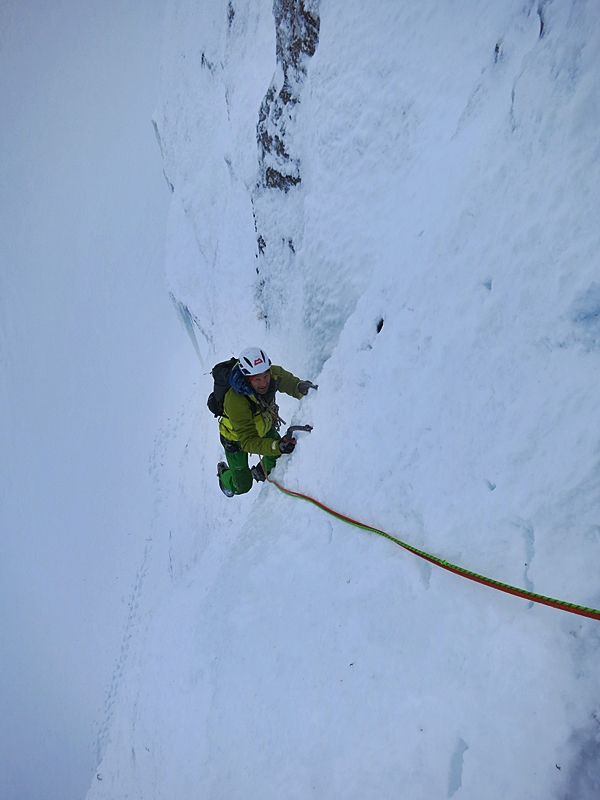 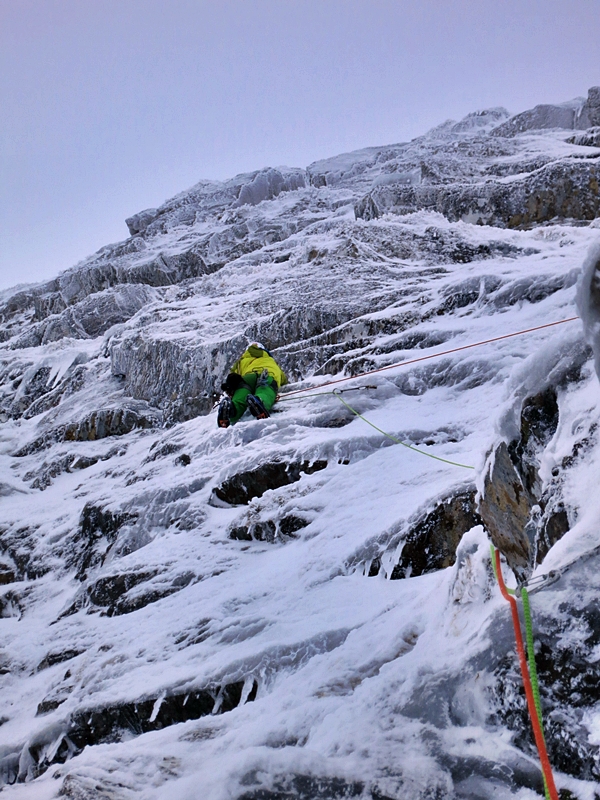 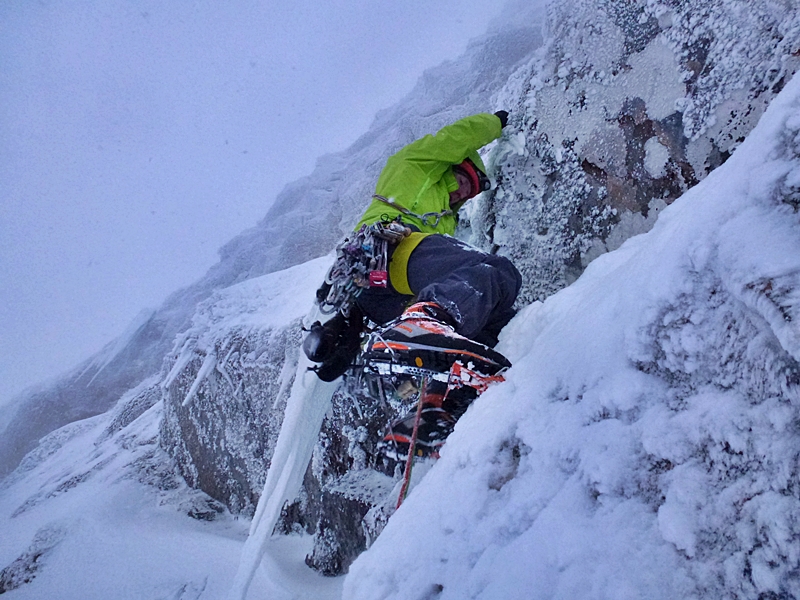 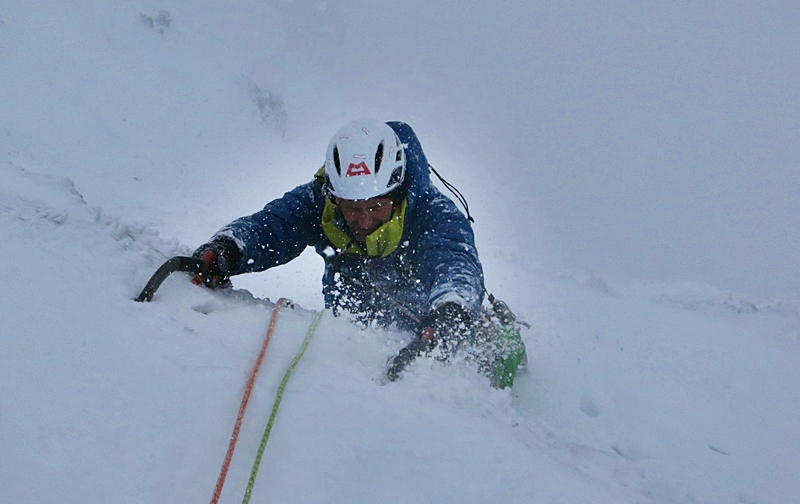 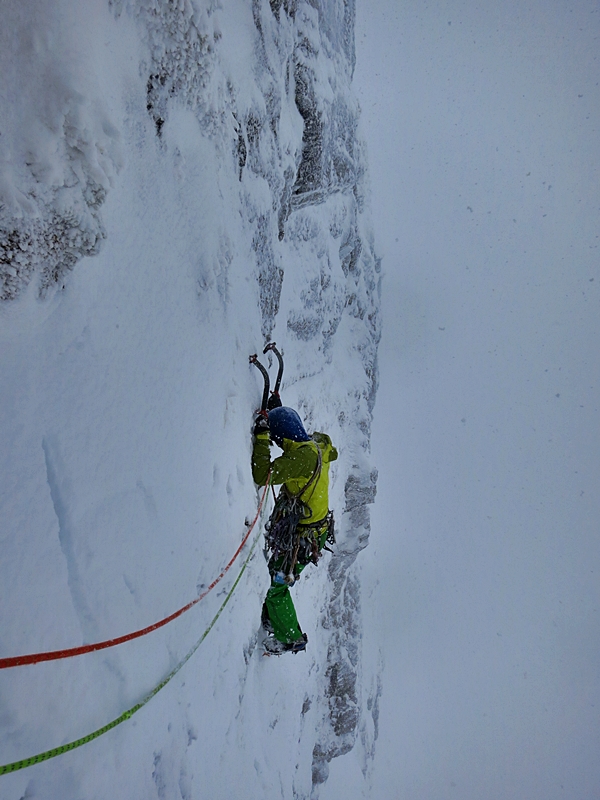 The perfect day. Stunning settled weather, a magnificent situation and a line both Greg and I had spotted a few years back. I lost Scissor, paper, stone all day and climbed the third pitch which was still good but not as spectacular as the second pitch or as sustained as the first pitch. We called it Making the Cut after talking to Simon Richardson about the amount of entries he has on his blog Scottish Winter climbs. 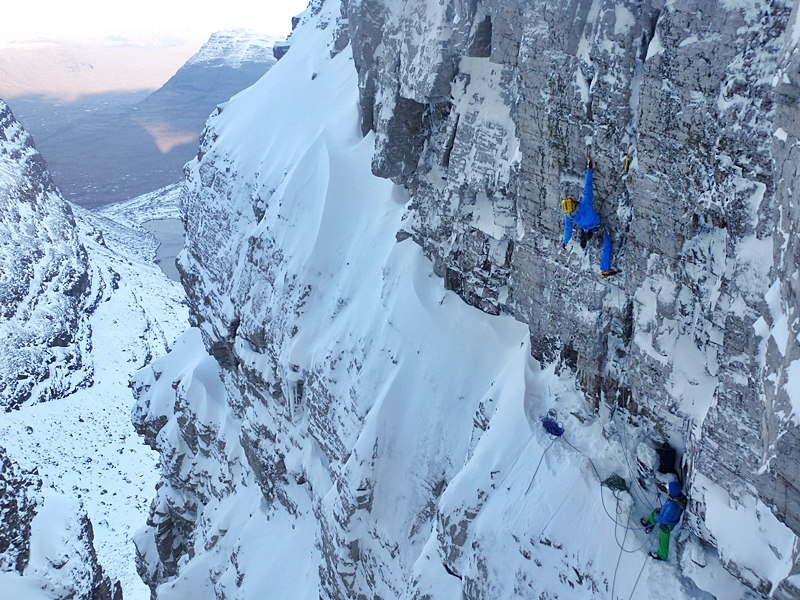 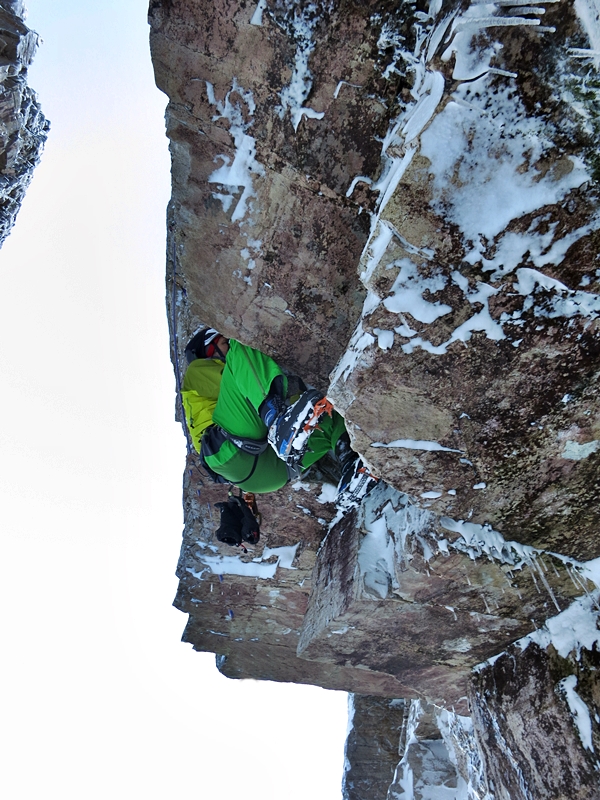 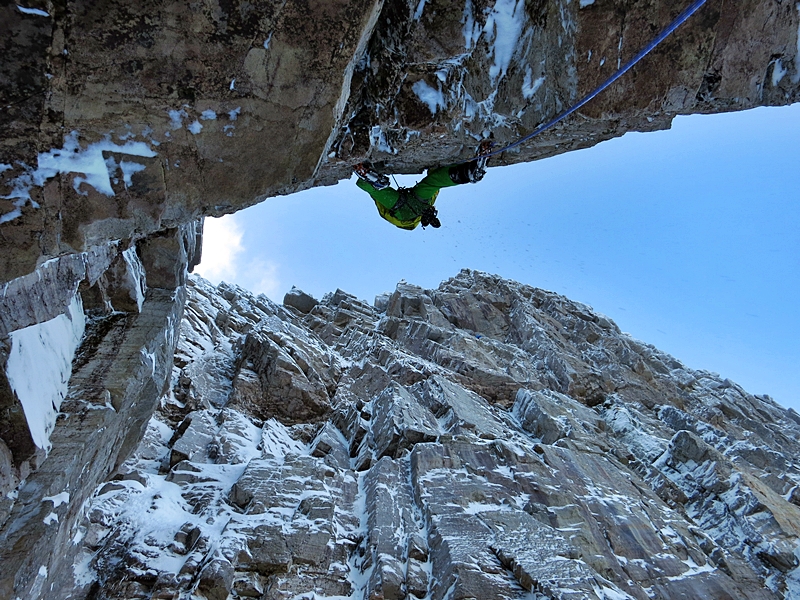 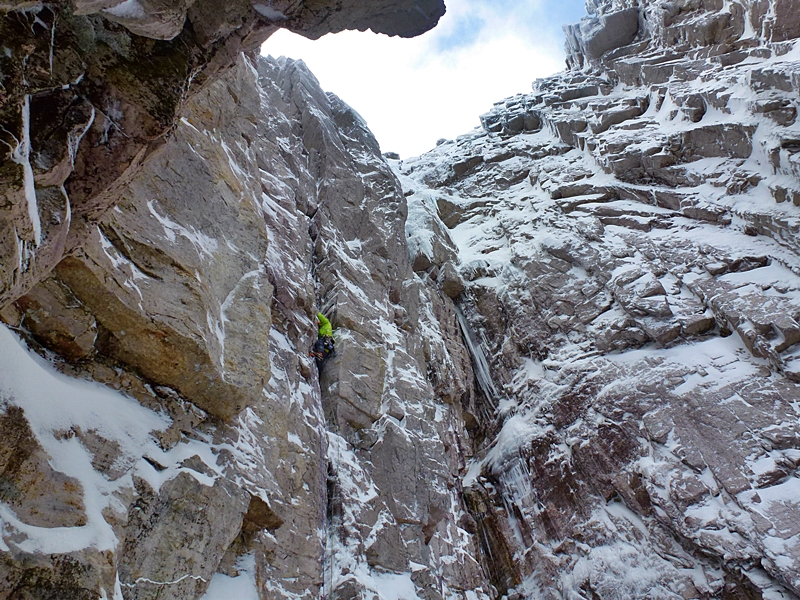 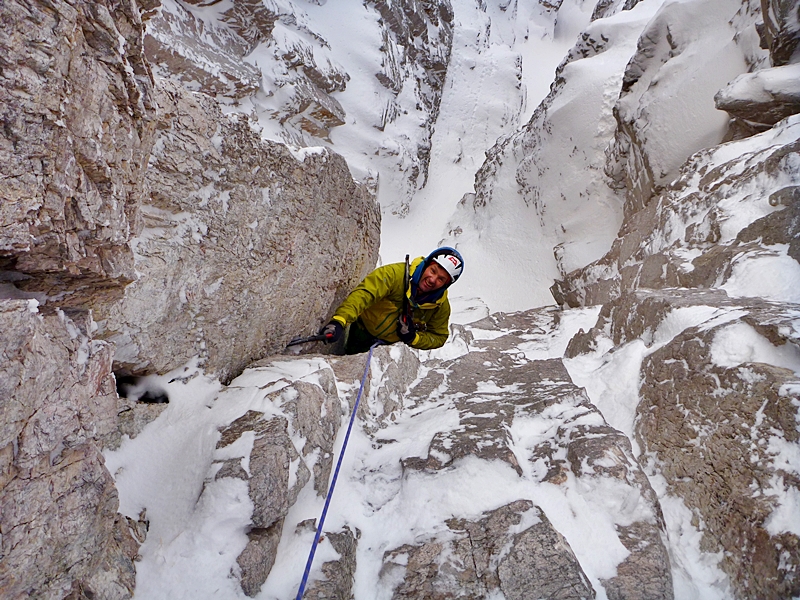 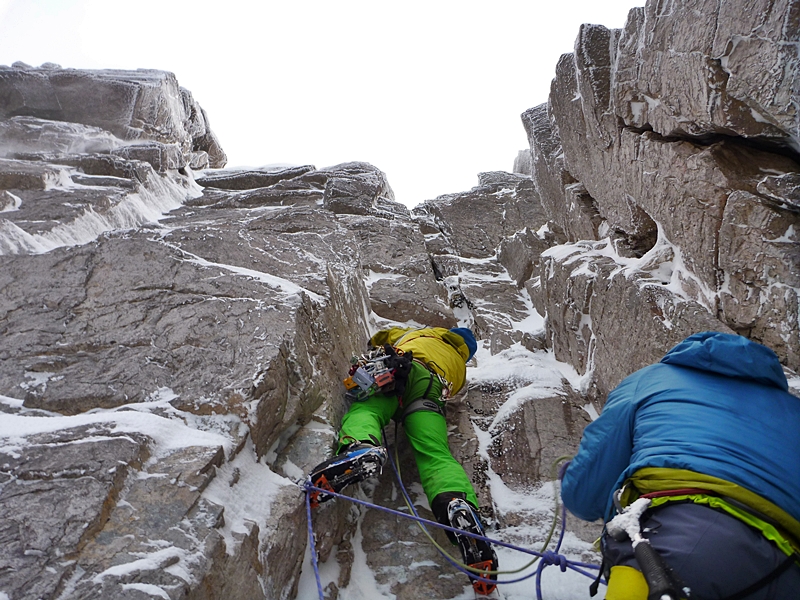 Thanks to DMM for covering the cost of the week and thanks to Nick Colton and Becky McGovern of the BMC for the great work, friendship and help throughout the week.

One Response to The Road.