In the Rucksack Straps of Mick. 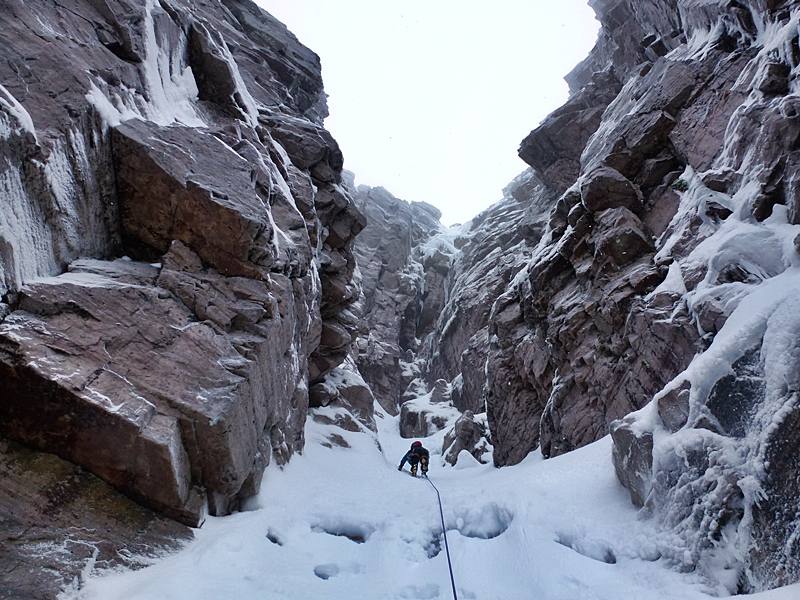 In the winter of 2009, as high pressure sat firm and fixed over Scotland and low pressure dominated in the French Alps. Pete Benson and I, both resident in the Chamonix Valley, took the unusual decision to fly from France to Scotland for the week. The final climb of the week, a snatch in thaw conditions, was what we thought at the time Mick Fowler and Mike Morrison’s wild and only once repeated in twenty two years, West Central Gully on Beinn Eighe. Pete showed some pictures to Guy Robertson and it was discovered we had actually climbed a new variation, passing right around the large overhang instead of left. Pete Benson supplied Simon Richardson with the information about the ascent and named it The Bullhorn/Benson Variation.

Hood up, head bowed, torch glowing – I chuntered. The rain slapped into the saturated earth and the sodden snow sponged up the moisture. The steep heather hillside, to reach the summit ridge of Beinn Eighe, was not the place I wanted to be in this deluge – in this wet miserable morning at 7am but Keith Ball was in-front and try as hard as I could to catch him, he remained far enough away. And the reason he remained out of shouting distance was because he knew this was rubbish. The small streams running from high on the hill could have been canoed and thick black bands of clouds covered all of the summits. Not half way up the horrible hill, my feet slewed like greasy chips in a bag.

An hour later and the summit ridge, clagged in cloud and swathed in sheets of spindrift, turned my nightmare into white buffeting reality. Any heat that had not been sucked from my soul blew away on the body juddering gusts. Large wet flakes of snow slapped into both Keith and my face.

After going around in little whiteout circles for a while we found the top of West Central Gully and decided to take a look. I abseiled the line of Blood Sweat and Frozen Tears. The steep overhanging walls drooled blue strings of ice and out of the bruising wind my world turned pink. And as I abseiled my glasses became rose tinted and in some moment of madness, I suggested to Keith, when we both stood in thigh deep snow in the base of the gully, that we change from the cunning plan of a quick wiz up the Central Buttress, for a quick wiz up the Fowler/Morrison route, West Central Gully.

“It’ll be quicker than plodding around to the central buttress, its only two pitches and I’ve done the first one before, it’s easy… how hard can it be… we’ll be up and out and back to the van, dried and fed and set up and ready for something more-tricky tomorrow.” I said, quicker than you can say the word epic.”

“OK Nick, I’m psyched, but we don’t have any ice screws, do you think that’ll be a problem?”

Keith looked up, up into the depths of the mountain, to the back of the gully, the line of the climb. A cave, a third of the way up was capped by a massive roof and to the left of the roof, blossoming from the overhanging corner, were two ice drips marking the way we would climb. After the roof thicker ice led to another overhang and after this steep continuous ice flowed to the top.

“Naa, we’ll be fine, it’s got all of that rock around it and let’s face it, its ice up there, who needs screws to climb ice in Scotland – ice in Scotland is never more difficult than WI4 and WI4 is piss.”

Keith thumped a track – knee-deep plunges into unconsolidated snow – and as I followed, I saw the temperature increase and in my worried wallowing, I watched the steep towering walls, walls that had suddenly turned into our cloistering prison, begin to cry with laughter.

In 2009, when Pete Benson and I climbed the fowler/Morrison line, my contentment swelled – this climb was one of those that had engrained itself beneath my skin – it was everything about it – the line, the first ascentionists – but most of all it was the story written by Fowler of him being on the edge, pumped stupid – pumped and slumping and hanging from a chord leading from his axes attached to his rucksack strap. When I first read the account of West Central Gully I had imagined and pictured, I could see him dangling from rucksack shoulder straps with legs kicking and now I had shared the same ground, or so I thought at the time. 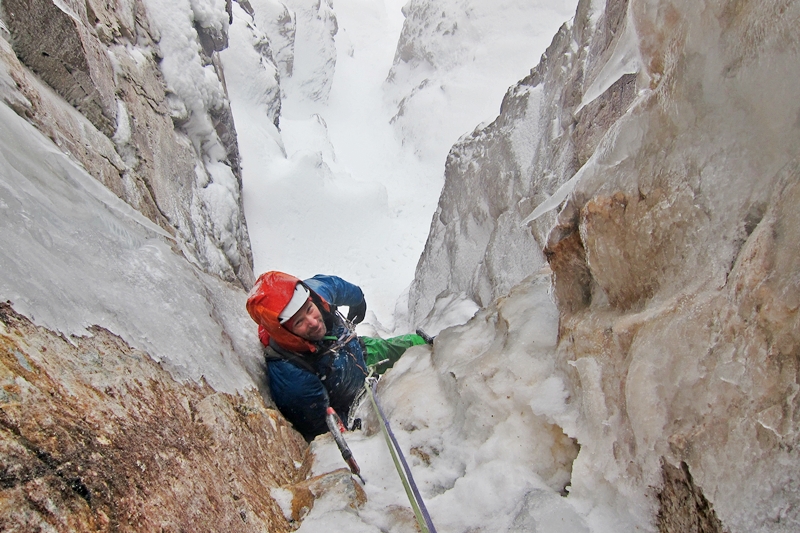 Keith and I were surrounded by an armadillo of orange quartzite. Lumps and ears and bulges that shed their frozen skin and the two frozen drips blooming from beneath a large flake-roof poured clear water from the tips of their fragile formations. I pulled into the cave from which Keith had belayed. The gully had become dark and the cave, in which we now sorted gear, was darker still. Spindrift carried on the wind, rumbled from the top of the gully, it cut a trench in the rotten ice and launched into space pouring over our horizon to thump into the snow packed gully a long way beneath us.

Before Keith had started on the first pitch, I said I didn’t mind who climbed what and if he wanted to climb both pitches that was fine, but as I pulled into the cave, Keith had said that he thought it best if I climb the top pitch. I was honoured that Keith had so much faith in my abilities, I wasn’t that certain myself. Braced – feet on one wall and my back on the other, we sorted gear and on occasion I stole a glance to the dark wall I was hoping to cross. 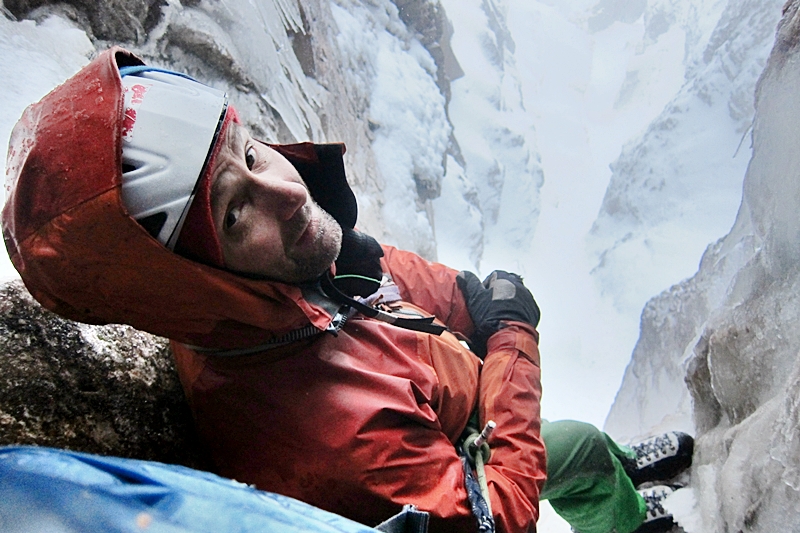 “I’ll use those sloping footholds to get out to the ice and see what happens. Got a feeling a few ice screws would have helped, there doesn’t look to be much in the way of rock kit.”

Three trips in and out from the belay resulted in a small cluster of rock gear, a pumped right arm while hanging from small edges and placing gear and a whole lot of nervous tension. On one of the soirees I had leaned back from a torque that could easily rip and cleaned the large fringe of icicles before attempting to make a placement in the ice above. The ice being in a delicate state decided to fracture and shatter and break and explode into the deep snow below. The gully reverberated. Another swing and another fracture line… I reversed a move or two and doubt flooded into my mind.

“This is going to be stimulating, the ice is all melting.”  When I get scared I do have a habit of stating the obvious.

Once again I leant-out from beneath the roof and the ice drip and swung and once again the ice cracked. I imagined the whole lump cutting loose with me still clinging to both axes planted firmly into it.

I ran back to the embracing arms of the belay cave. Why did we have no ice screws, what the hell? The climbing was overhanging and the ice was melting and all of my experience told me that the moves above my highest position were going to be even more committing as the ice would no doubt be rotten and mushy. I blamed Keith for getting me into this, ‘what a bastard, I would not normally have left my bed in weather like it had been, he was to blame, he did this to us, he had let us down.’ But after a few seconds I got a grip and remembered who had suggested this climb and remembered that I was a grown man who could have said no, so instead of complaining I decided to get on with it. 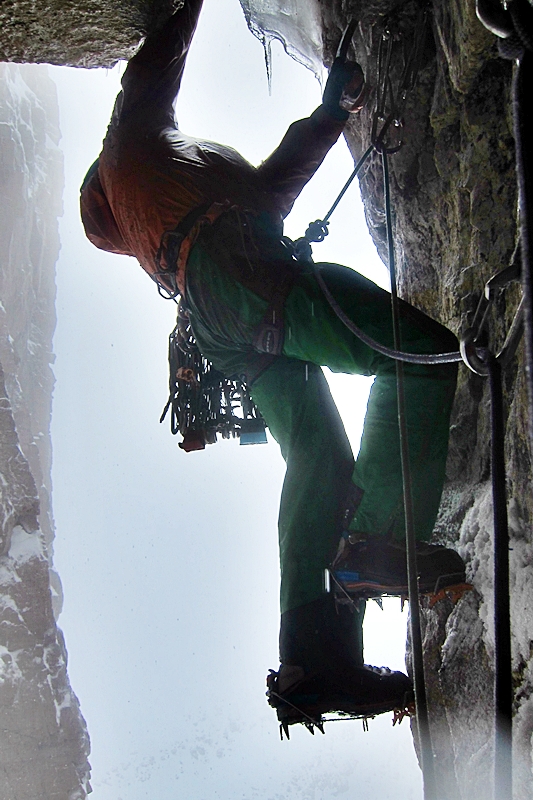 Nick Bullock building the courage to pull into a world of melting unprotected.

Trusting one pick into the ice blob I leaned-out, and leaned out some more and eventually I pulled. Eyes darted – footholds, gear placements, ice condition, the height I was above the cluster of gear, in a flash I took it all in and in that same moment, once that barrier has been crossed my mind quietened and focus was everything. Small edges for the left front-point were crucial, I pushed my shoulder to the right wall relieving weight from the axe-picks which were placed in mush and attempted not to think about what would happen if the left front-point slewed and I shock loaded the axes.

Inching, inching – mush, no gear – inching – melting ice, no gear – inching … I was past the first drip beneath the second more continuous flow… fifteen minutes… fifteen minutes, maybe more, planning and digging and building courage and planning and digging. I changed feet several times to try different inching up combinations that would put the least amount of force on both axe placements. I’m useless at crosswords and puzzles but this was a puzzle I had played before and eventually, after much thought and many mind twisting combinations of feet and axe placements I made a decision and pulled.

Stood at the side of the semi-circular snow gutter, just beneath the summit ridge on a flat rock step, the same place I had belayed in 2009, shards of snow exfoliated my face and in between sinking into the depths of my jacket, I looked around and in that looking around, into that pale blue sky, that electrifying wind, once again I felt the same bursting glow of contentment which was filled even more when Keith pulled into the gully above the overhang and was continually pounded by spindrift. ‘Ha, that’ll teach you Keith Ball, getting me out in such rubbish weather.’ My day was now complete! 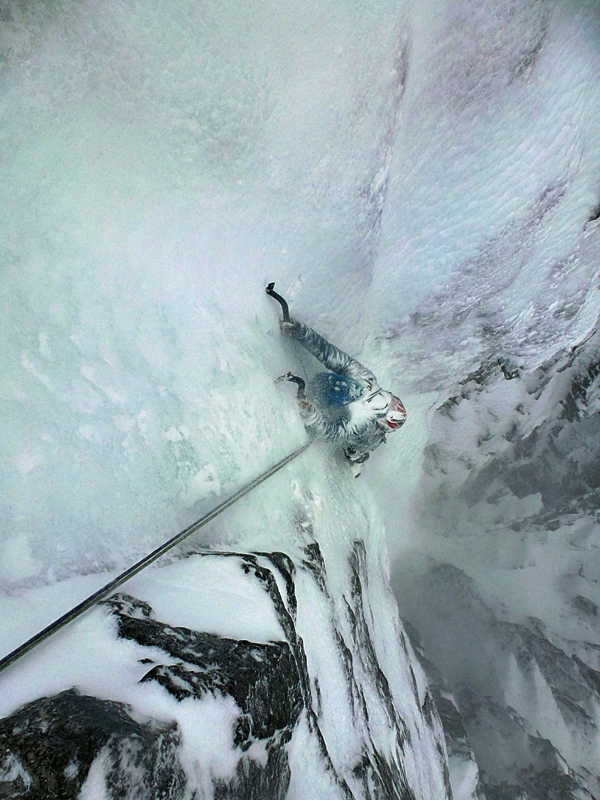 Keith Ball getting his just deserves! 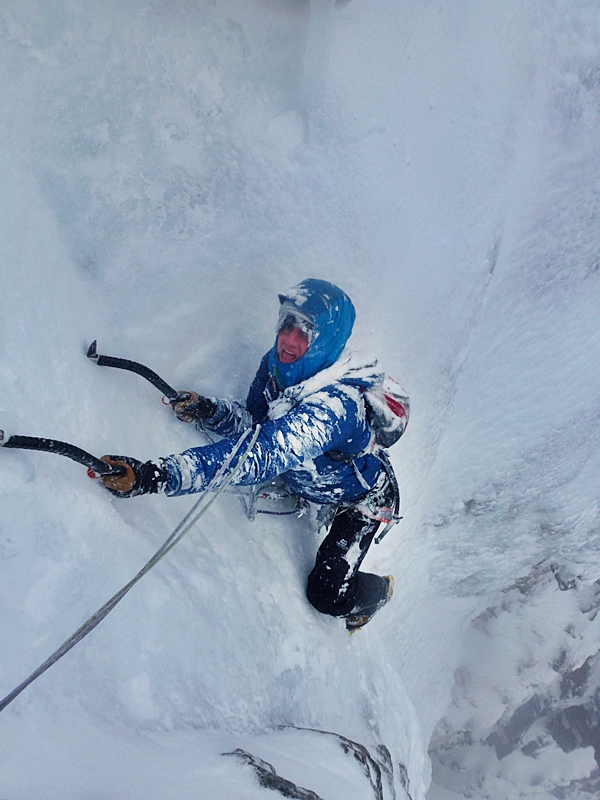 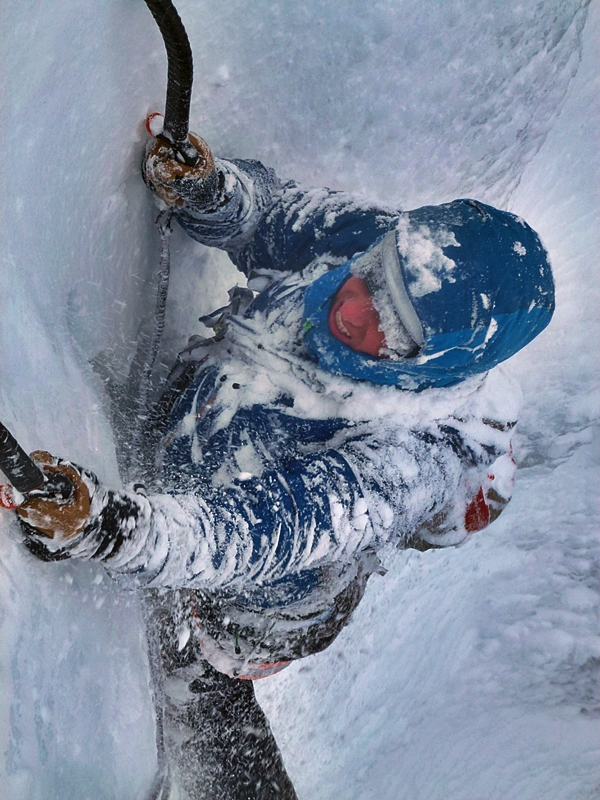 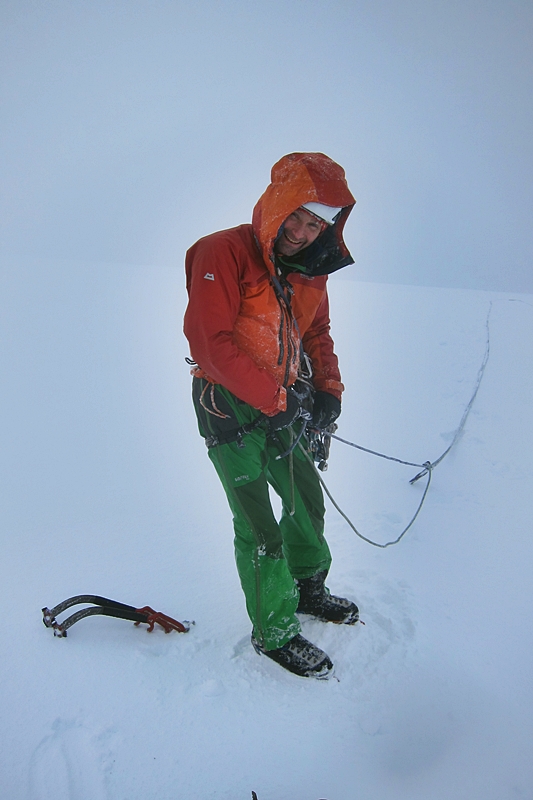 Glad to be out… 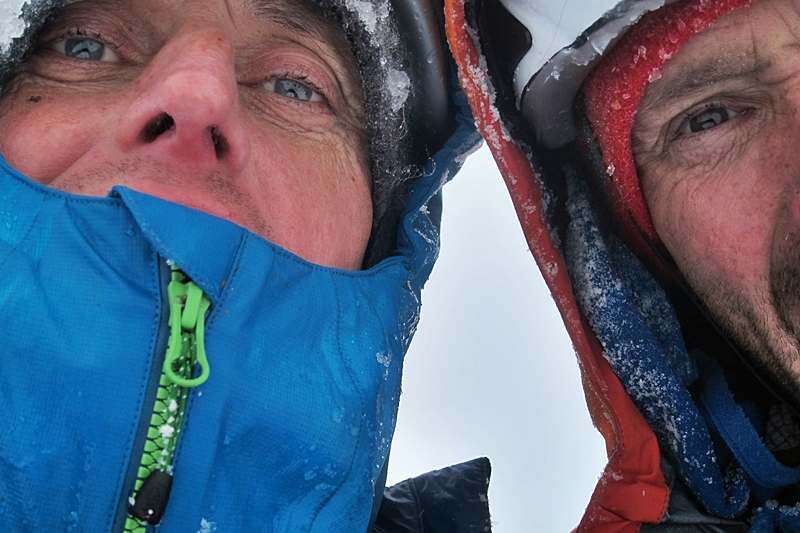 The eyes of old men who should know better!

One Response to In the Rucksack Straps of Mick.