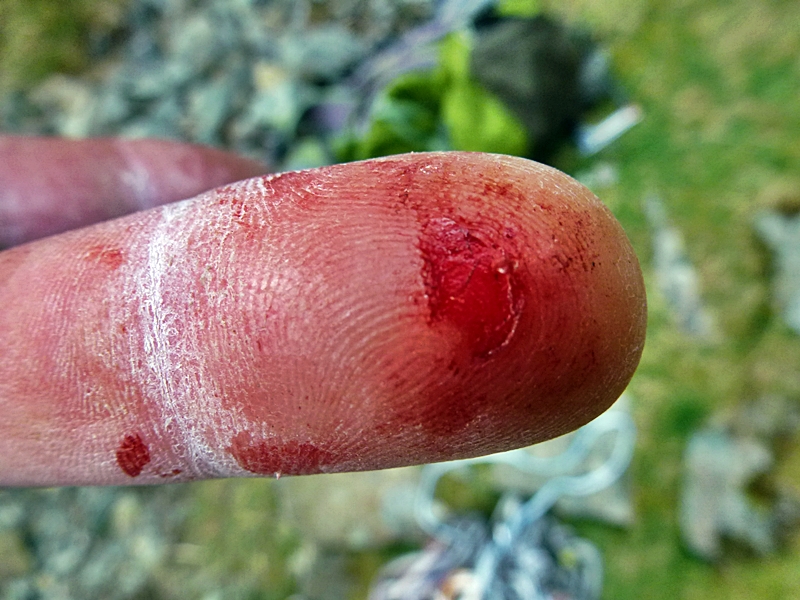 Locked inside bone, how is that voice to be quelled?

How much is enough?

How much is not enough?

…Scimitar Ridge, concave like the inside of a wooden rowing boat tipped onto its side, is a slice of corrugated basalt cut from the steep heather of the Llanberis Pass. Twisting through the valley base below Scimitar, a stream of clear mountain water slowly flows and in that slow flow is the reflection of the sun and the mountains. The stream is a glittering artery feeding the dark boggy earth – earth made-up of lives – lives blown on the wind of years – desiccated skin, blood, bone, sinew – lives lived, lives lost.

Scimitar is the home of hard climbing, climbing made difficult by the nature of the rock. There are few crimps and holds to pull down – it is open hand, side-pull, smears for feet, palming – spotting protection from below is difficult and reading the rock, even more. Scimitar rewards the confident.

Two years ago, or maybe it was more, I opened my eyes to the minutia while working a climb called The Trumpet Slappers. There was an empty space to the right of the Jonny Dawes route, The 39 Slaps. But of course this space was not empty; it was an empty space on a page in a guidebook – a picture space without a line. In this, ‘real life’ there was the smooth grey of Scimitar’s Basalt. And in places, glued to the surface of the grey were cumulous scabs with sharp bubbled edges of metamorphosed quartz. There was also, one very small in-cut, triangular crimp and one mini basalt column and an overhanging groove and an overhanging arête. Unfortunately in this space – this ‘none space’ – there was very little way to protect, what would be difficult climbing.

So, two years ago, or more, I successfully climbed a strange hybrid, The Trumpet Slappers – The 39 Slaps into the top section of The Trumpet Blowers – and sometime afterwards, Graham ‘The Hippy’ Desroy and I dropped a rope into the airy space around this ‘none space’ and decided very quickly it would go, all be with a lot of effort and courage, (pointless stupidity some may say) and time.

The start, a savage boulder problem, did not suit me, it was technical and powerful with smears for feet, but the bold and overhanging wilderness above, a strange eclectic mishmash of features – features to be used in a million different ways – did. And for two years, or maybe more, I imagined.

Last week, or maybe it was more, crisp northerlies caught on the rhyolite boulders as the wind travelled through the pass. I returned to Scimitar Ridge with Katy Forrester. I had spoken about this ‘none space’ frequently and had in my mind to warm-up on established climbs to get into the Scimitar smears and side-pulls before checking the ‘none space’ to the right of The 39 Slaps. Katy was the secret weapon to unlocking the technical boulder start as she is a much more gifted rock climber than I will ever be.

It was Easter and the snow streak, a long thin line high on the side of the pass clung to the shade in Parsley Fern Gully. Cars, motorbikes, busses, people and cyclists joined the flowing northerlies but unlike the cool breeze, which turned Scimitar’s unforgiving basalt into something friendly, I could hear car horns, the squeal of brakes and the odd shout of an annoyed cyclist.

Climbing appears worthless and useless and stupid to many people and in a way, I understand this point of view, but there is something primeval and liberating for me, to become involved with a piece of rock and the movement required to successfully journey up that piece of rock, until there is connection and personal history. Hubris? Recognition with a small R? Maybe, but climbing, and the associated things which surround climbing, make my life more complete, complete and fulfilled in the same way as a piece of well written prose, a great film, music, poetry, wild weather, a tasty meal, a rugged landscape, a glass of wine or watching a rare and shy wild animal.

Katy worked a sequence of moves that involved deep drop knees, smears and many exact toe placements and after a while she had unlocked the lower barrier. My plan had backfired, no way was this going to work for me, so I took a more direct approach pulling as hard as I could from sharp edges and putting one on for a large slippery side-pull. The side-pull had to be snatched with an open hand and a thumb pressed very precisely to a roughening on its front face. That roughening is orange with a millimetre deep depression and as I write I can see it. Minutia. Body tension – so much body tension and as I write I can feel that tension. And this snap of tension has to be timed perfectly with hitting the side-pull and leaning to the left and the pressing of a toe to a high sloping smear.

The body’s ability to adapt and the minds ability to upload never fails to amaze and I knew with time and practice, my body and mind would become strong and tuned but I know also the mind is very practiced at denial and much like that ever decreasing Parsley Fern snow sliver, I knew time was the greatest price.

Two stacked micro wires, impossible to place on lead was the protection for approximately the first half of the climb. A small section of rock had already broken next to the wires. I did not trust the wires or the rock they were placed, or my ability to hit and hold the side-pull and successfully continue with the moves afterwards.

This climb into ‘none space’ starts from Agamemnon, an established E1 and follows this for a few metres. Leaving Agamemnon, a high side runner could be placed, which would not stop a crunching fall should the micro wires rip, but it would stop a continued journey into boulders and down the steep hillside.

I sit beneath the crag on the steep slippery grass slope with the cool northerly breeze and look up to slowly moving people-specks silhouetted along the ridge of Crib Goch. Below, running down the white lines in the middle of the road, three sheep trot and baa. Traffic builds on both sides of the sheep. Hot cars with peeping horns. The Parsley Fern snow patch is now the shape of Italy. 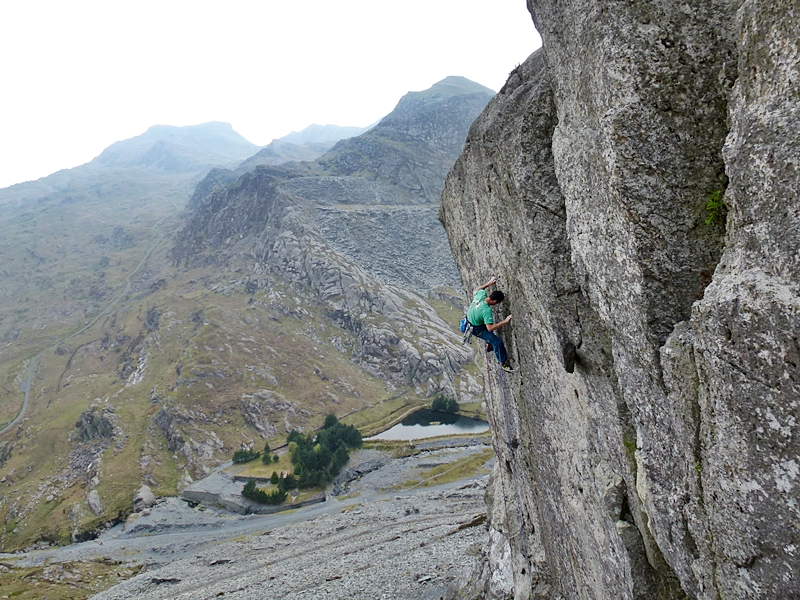 Getting into the headspace on Purple Paradise, Craig y Clipiau. Pic, Tim Neill.

Returned today to Scimitar with Tim Neill and climbed the new line. 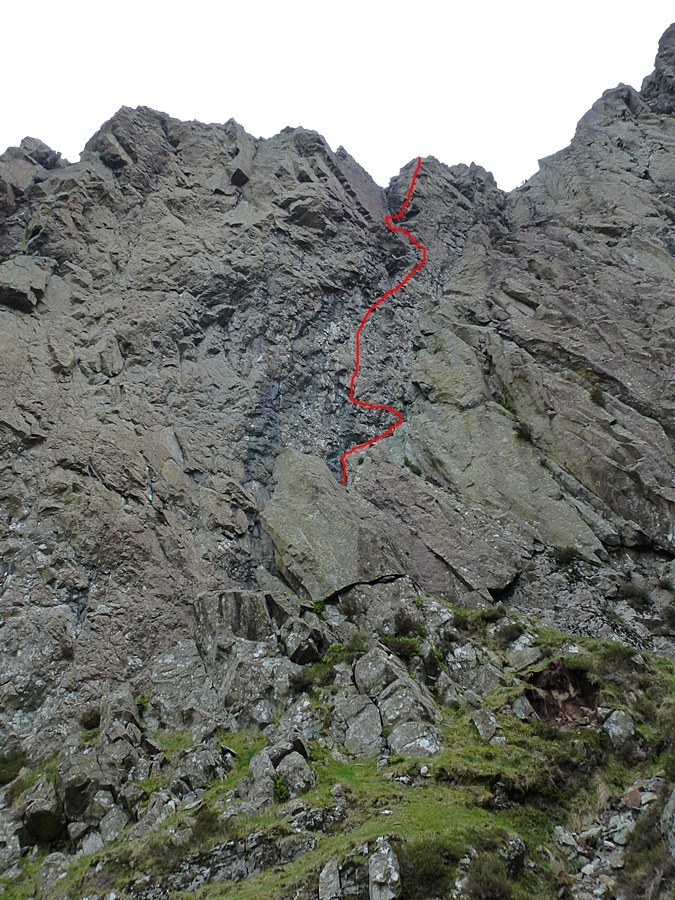 Climb the first few metres of Agamemnon, place a high runner or two level with two Imps, pre-placed just below the triangular side-pull. Down climb until level with a down pointing spike on the left. Climb to the spike and make hard moves up and slightly right past the Imps to the a large slippery sidepull. From the sidepull climb left and then back right to a small Basalt column and under-clings. Good gear. Move up and right until it is possible to stand on the top of the spike of Agamemnon. Arrange gear before climbing into the base of the steep v-groove above which is level with a flying arête on the right. Pull onto the arête using a hidden hold on the right and climb it to the top.

Thanks to Katy Forrester, Will Sim and Tim Neill for the belays, couldn’t of done it without you. 🙂