It’s All About the Number 8? 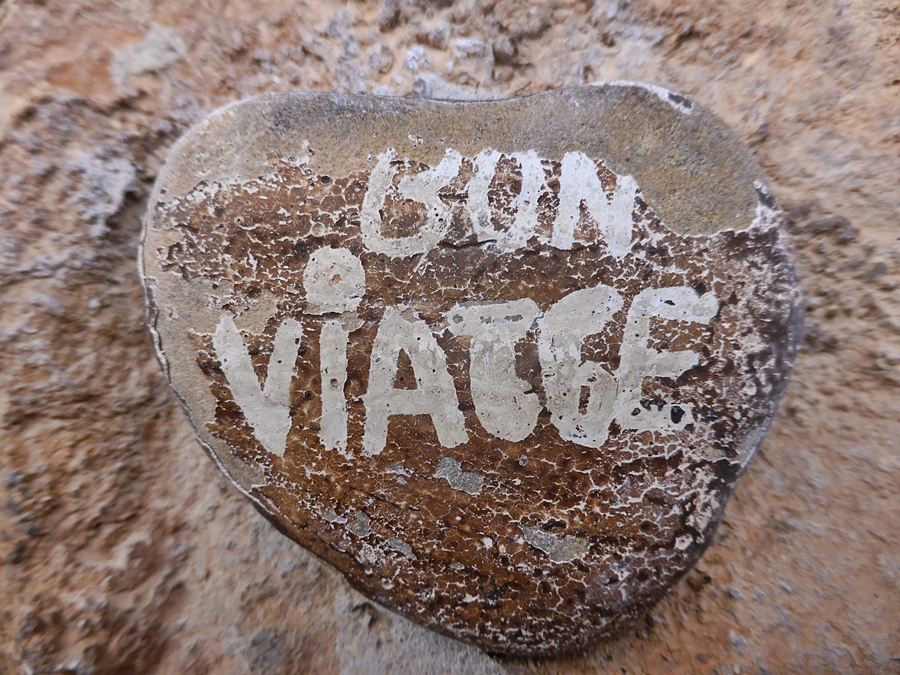 8a was a grade I wanted to climb but it was a grade that alluded due to a multitude of reasons, the main ones being my inability to remain focused on a single climb, enjoying traditional climbing more than bolt clipping and taking big breaks in rock climbing while going to the mountains or winter climbing. I also think a lack of my technical ability played a part as you just can’t throw yourself up an 8a, well, I can’t anyway.

Over the years, especially the more recent years, I always felt 8a was a gap in my CV as it is a bench mark, it’s like Grade VIII in Scottish winter, WI 6 on ice or E7 on trad, so when I successfully clipped the chains a few days ago on my first 8a it was super satisfying. The climb which popped my 8a cherry was Bon Viatge, Les Bruixes, Terradets, it took two and a half days and approximately five attempts before, on the sixth, it went. Since climbing Bon Viatge I have thought and chatted a lot about why 8a was important to me and I concluded that 8a was always a grade and style, another planet from what I envisaged was possible for me several years ago.

But, and for me it’s a big but, I can’t get past the fact that in some ways, for some people, it appears to be more about the number, not so much about the climb, the situation, the experience, the company… or does it? Many times people have said to me, “Go to this climb, that climb, find one that suits you, this one is easy touch.” Which suggests that any 8a would do as long as I could climb it, which in turn suggests that it’s not about the climb, its more about the grade of the climb and this makes me ask, is it all just about ego which in turn led me to wonder, how much in climbing is about pushing personal boundaries and how much it is about ego and is there is much difference and this led to me wondering, why improving the grade you climb, is so important to climbers in general? This is not a go at sport climbing or people who focus on climbing harder, because this scenario can be used for any aspect of climbing – traditional climbing, ice, mixed, bouldering, mountaineering – but why is pushing the grade important and is it a bad thing?

I think the difference for me on Bon Viatge, compared to the other four 8a’s I’ve attempted in the past is, I enjoyed the moves, the style and the experience and it is in Spain not Wales where the sport climbing is mediocre and the traditional climbing is some of the best in the world and it’s certainly a fact that I have always enjoyed the psychological aspect of climbing more than the physical and doing hard moves or even stepping from the ground on something that I know will mentally test me is always going to be a more memorable and rewarding experience.

Anyway, all said and done, old punter mountaineer climbs 8a, chest puffed, ego fluffed even though I’ve missed the boat and everybody and his dog climb 8a nowadays, so all in all I guess it must nearly  be time for the mountains again and to get weak 😉 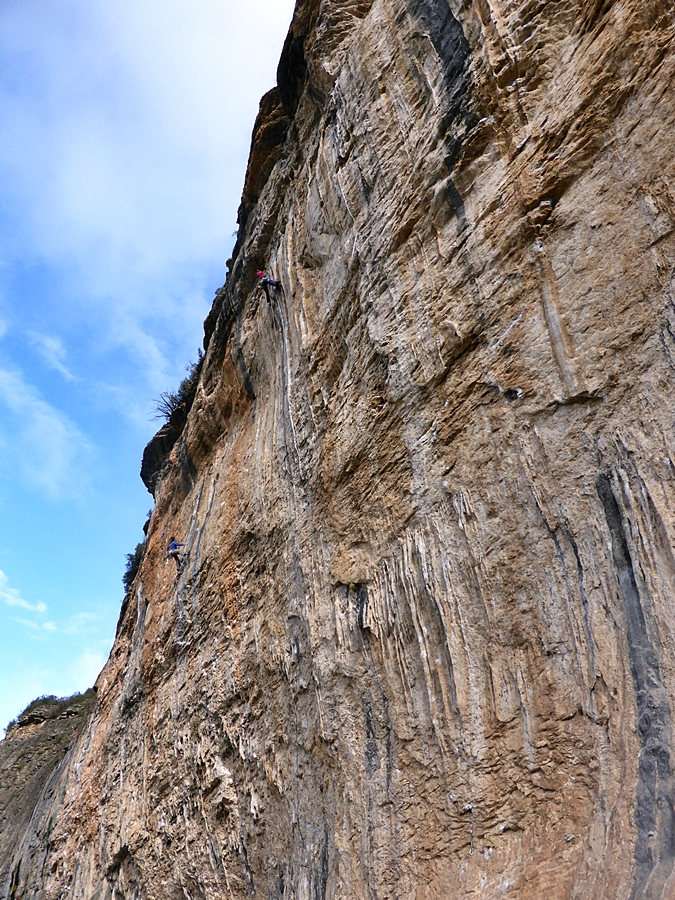 Lucy Creamer warming up on El Latido del Miedo, certainly not her first 8a! 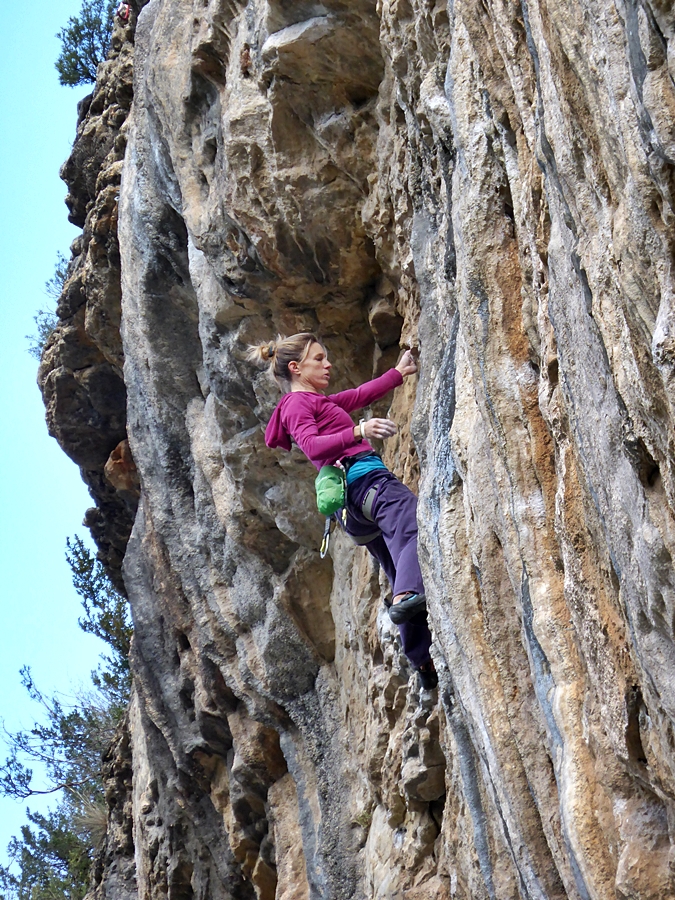 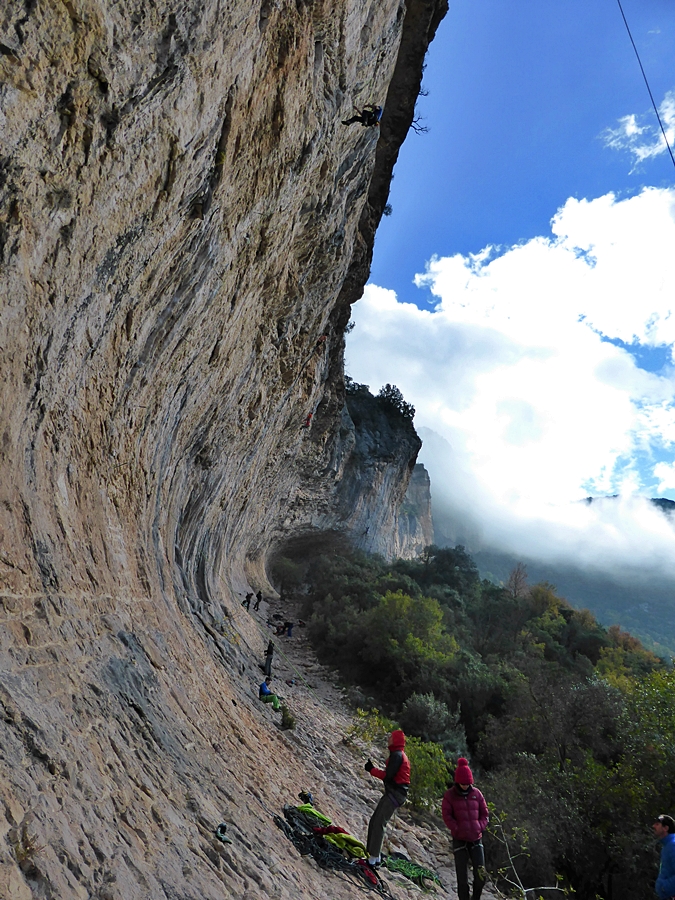 Another day in the Terradets office.