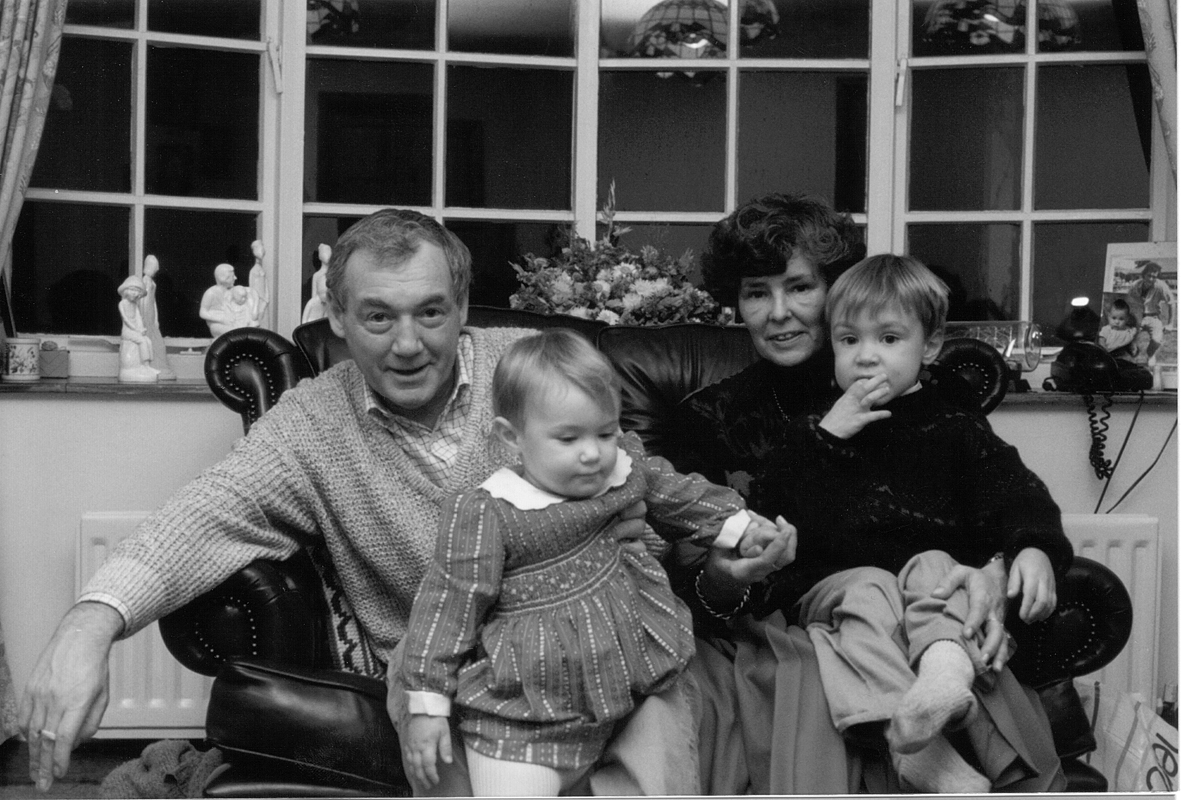 The grains in an egg timer.Dad, my niece, Cloe, Mum and my nephew Jake from a long time ago. cloe and Jake are now grown up and married.

Whispering white grasped by the wind was thrown down the granite V-groove, fortunately the grey overhang capping a dog-leg in the groove, protected me. Spindrift flowed – grains in an egg timer – the snow caught in the granite cracks that laced the steep surrounding walls and made small dunes. The sand-spindrift measured time, it marked time – grains, we are all just bloody grains – a lifetime, our time, our only time… catching the last lift was going to be close – the last lift to take us back to the valley was at 4.30pm.

Tim Neill and I had caught the first cable car from La Palud, the small village with its stone roofs and steep narrow roads above Courmayeur in Italy to exit at Pointe Helbronner and after a look at the West Wall of The Tour Ronde, we skied to the base of Pointe Adolphe Rey and a flaring v-groove. The groove had been climbed on 23rd Oct 2014 by Jean-Marc Chanoine and Denis Trento but before this, for the first ascent, the groove was climbed by the driven and tenacious Erhard Loretan who died before his time in 2011,aged 52. The groove appeared fitting for the first climb of my alpine winter.

Tim climbed the first ice pitch and I climbed the technical V-groove capped by a roof, and as I pulled into the higher groove, the spindrift for some reason stopped until I hung from two pitons and belayed. The walls were flecked with the white of quartz and the white of snow. Looking out from the confines, out across the wastelands of the Vallee Blanche, I watched clouds – like familiar old people nearing the end of their time ,slowly creeping across the glacier before shrouding the mountains.

Tim reached me and checked his watch, it was 2pm. We had to skin back to the top lift at Punta Helbronner which, given our un-acclimatised condition, was not going to be quick. “Shall we abseil.” I suggested. “You lead it, you’ll be quick.” I grabbed the rack, Tim sorted the ropes and then I set-off using my hard won Canadian drag and hook and pull technique. The climbing was easier than the second pitch but the rock had deteriorated and being quick was made even more difficult because I didn’t fancy killing Tim today as he was belayed in the groove below and anything I set free would hit him.

Reaching the crest, dervishes of snow wound around loose blocks of granite. I rigged a belay and Tim joined me before tying tat around a large spike to begin the abseiling and the weaving sprint through the deep blue crevasses of the glacier.

“It’s quarter past four, we’re not going to make it.” Tim delivered the news but apart from being expensive, it was not really that bad, the Torino Hut was open housing the workers who were working on a new cable car station. It wouldn’t have been bad anyway; I had bivouacked in  closed for the day Téléphérique stations quite a few times before.

Inside the Torino Refuge, white painted walls with hand written chalked sentences in several languages, dull yellow light, shadows, wood beams and wood furniture, stacked bags of wood chip to feed the boilers, yellow patterned plastic tablecloths – this is the world on the summit of an alpine mountain in winter. Behind encased walls, life and the world is separated. I felt like a child, safe, protected by the family home while a storm rages outside. Sorting gear in the boot room, a cat that looked like a racoon helped. Tim and I had decided to climb the next day, what was to lose, we were already up and our acclimatisation was improving by the hour.

I received the text from my sister as I woke at 6am the following morning, “Mum admitted to emergency admission unit, we’ve been called in, it’s not looking good.” I sat in the dull yellow light of the hut – the dark outside was dense and cold and lonely.

My Mum was not going to make it through the day.

Tim and I returned to the valley, the sleety-snow stuck to the thick and warped stone roof-tiles in Courmayeur. People dressed in hefty clothes walked, heads bowed. The world was dark and cold and life to me at the moment, with a million images from the past spinning through my mind, appeared short.

My Mum died at approximately 11am that morning. 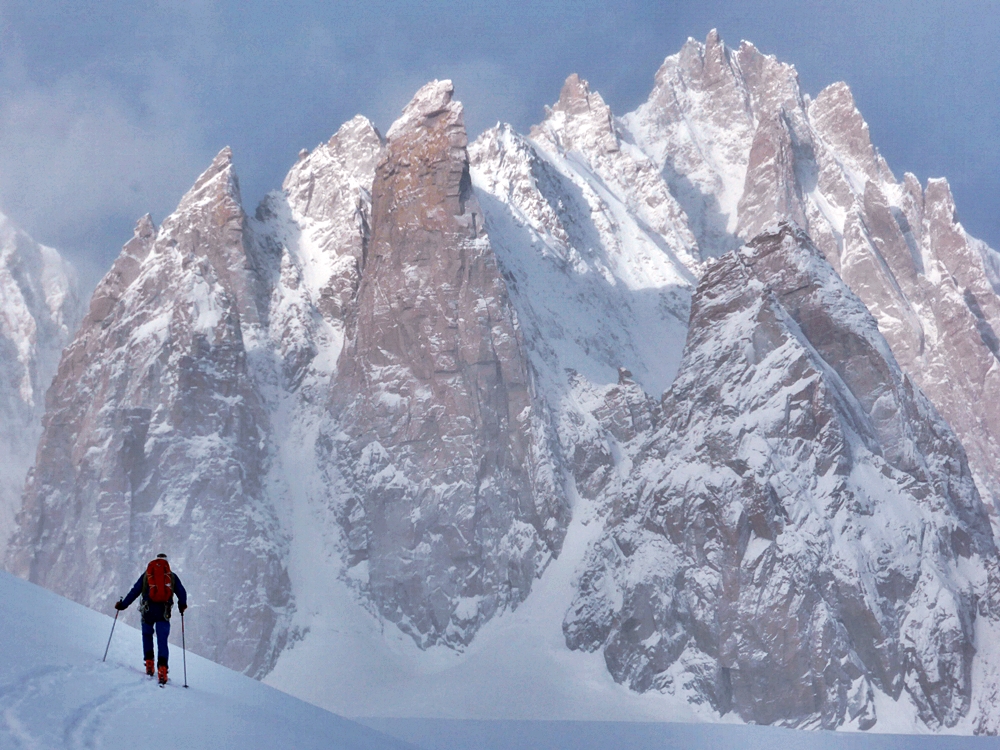 Tim Neill skinning to have a look around Cirque Maudit . 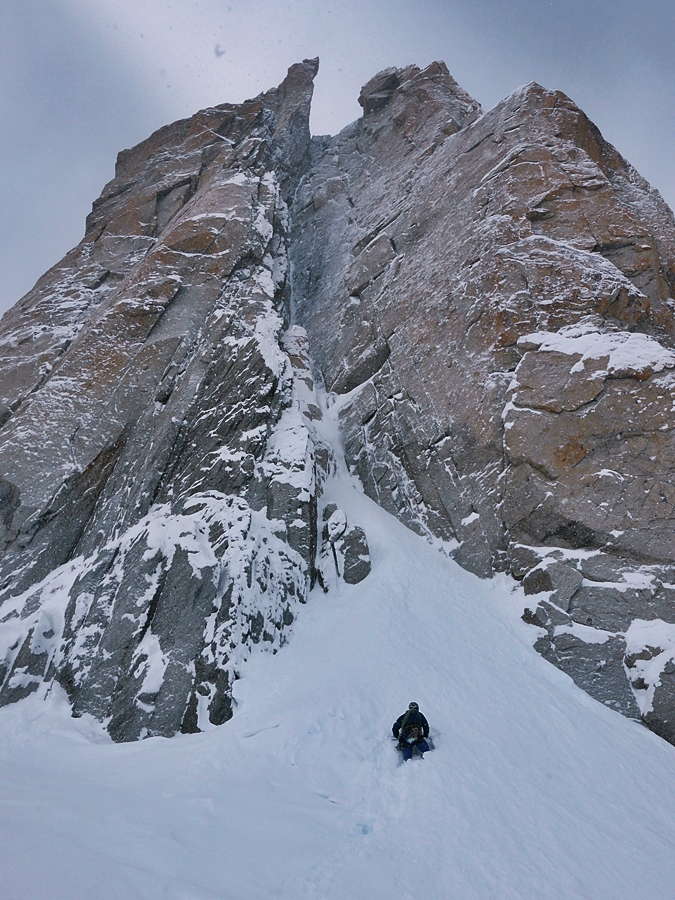 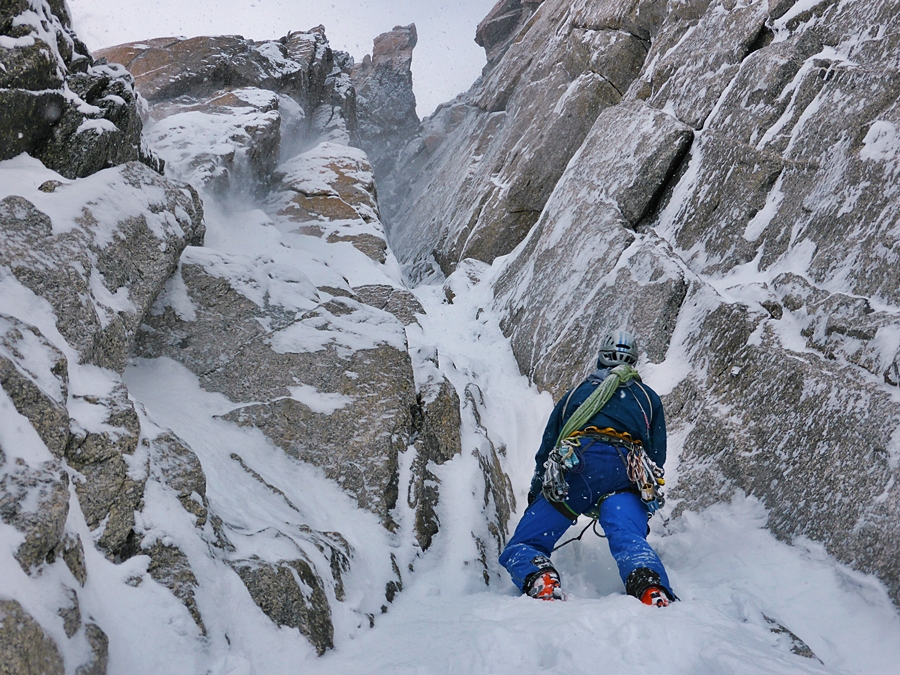 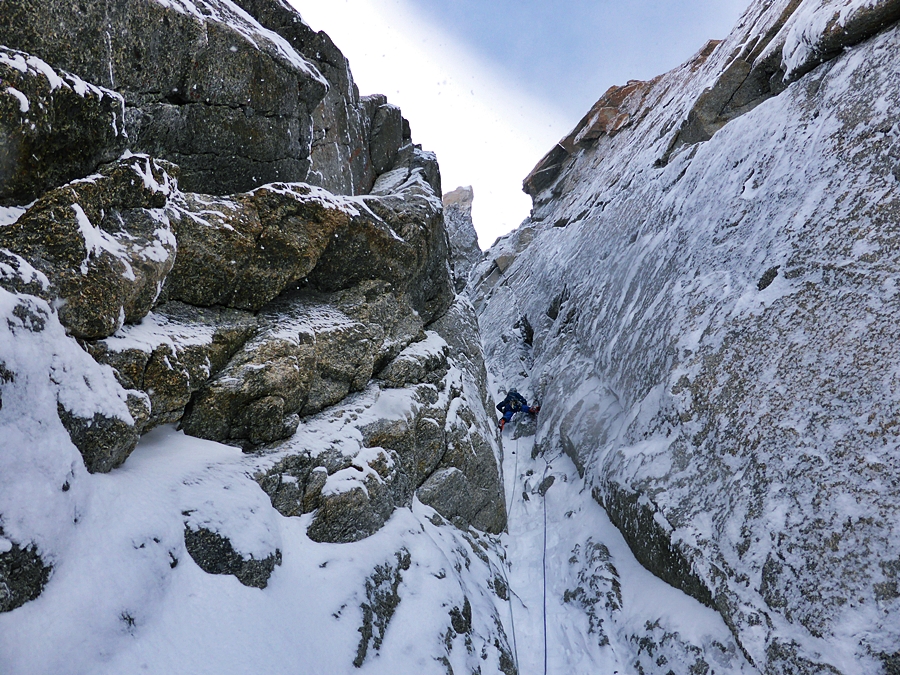 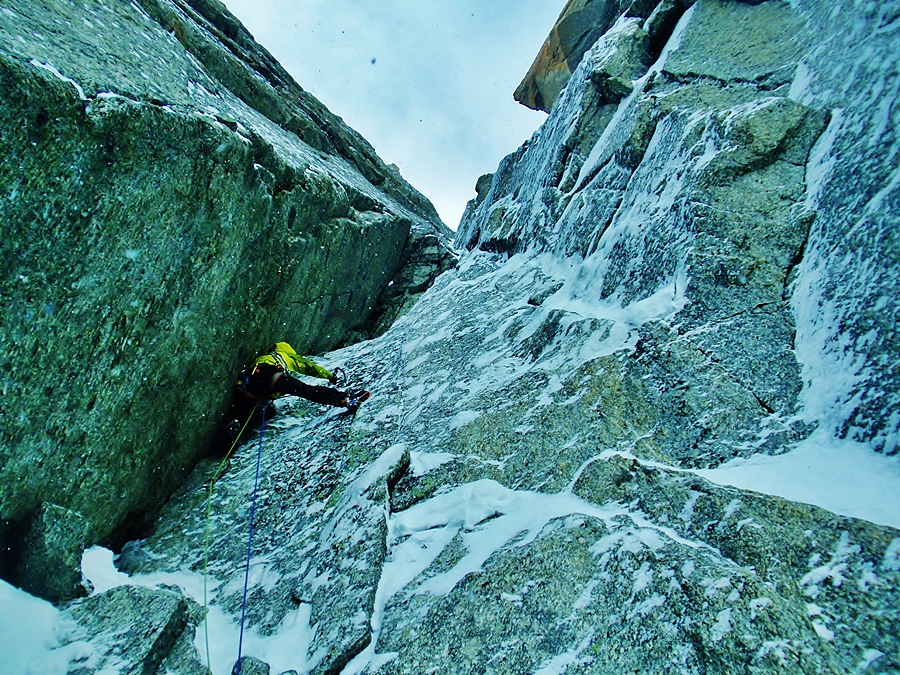 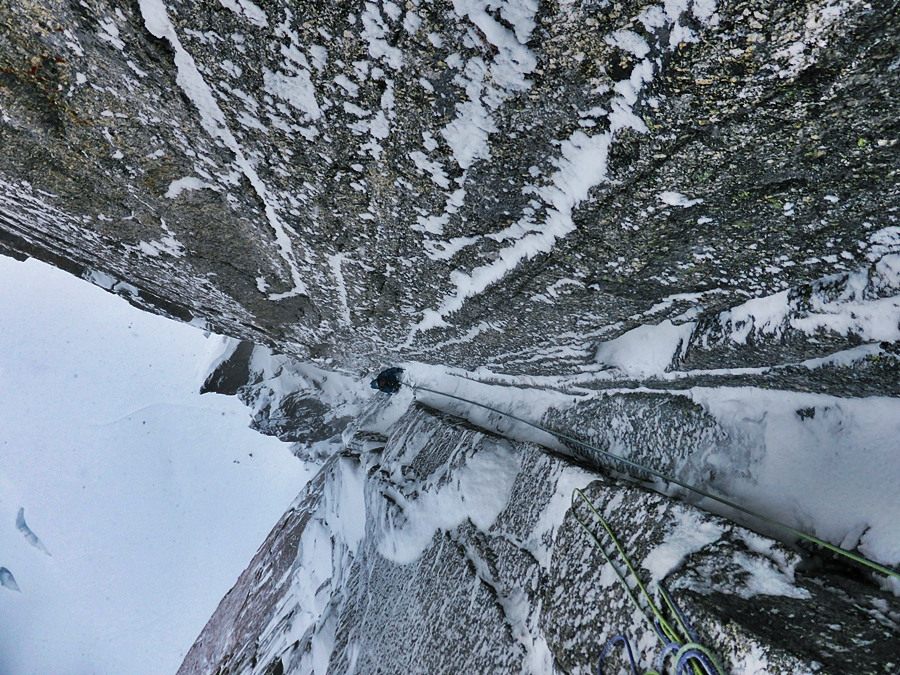 Tim having just pulled around the capping roof and dog-leg on pitch two.. 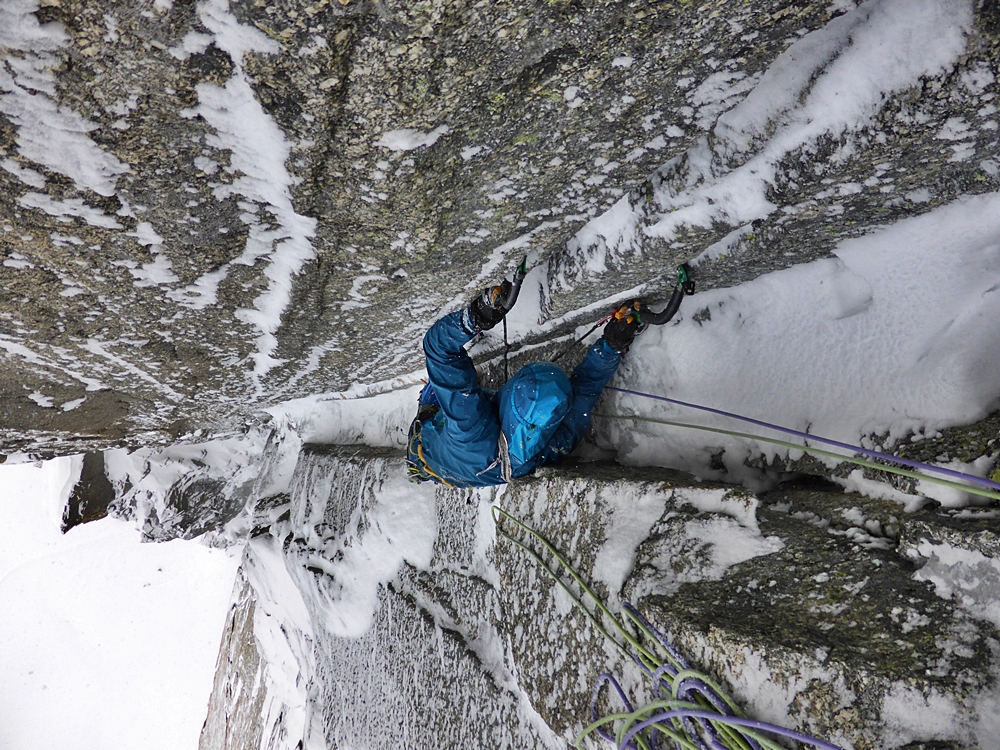 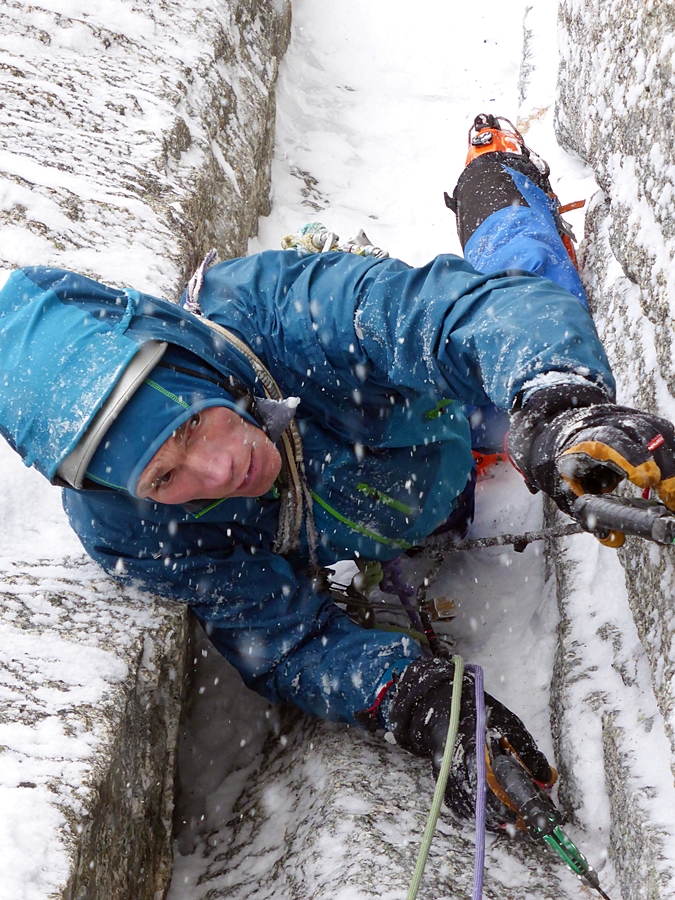 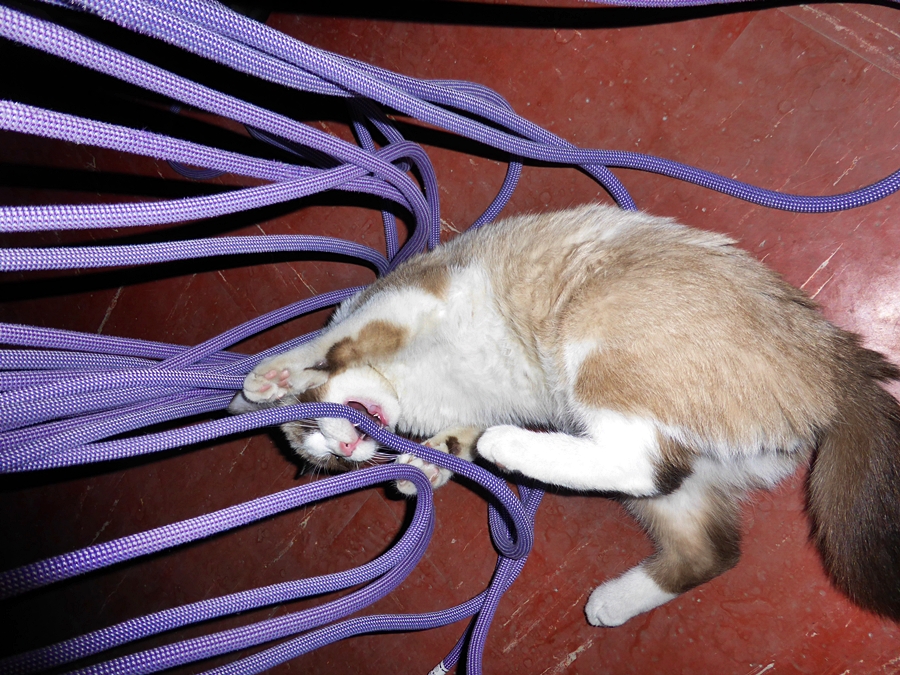 Torino Cat helps with the rope. 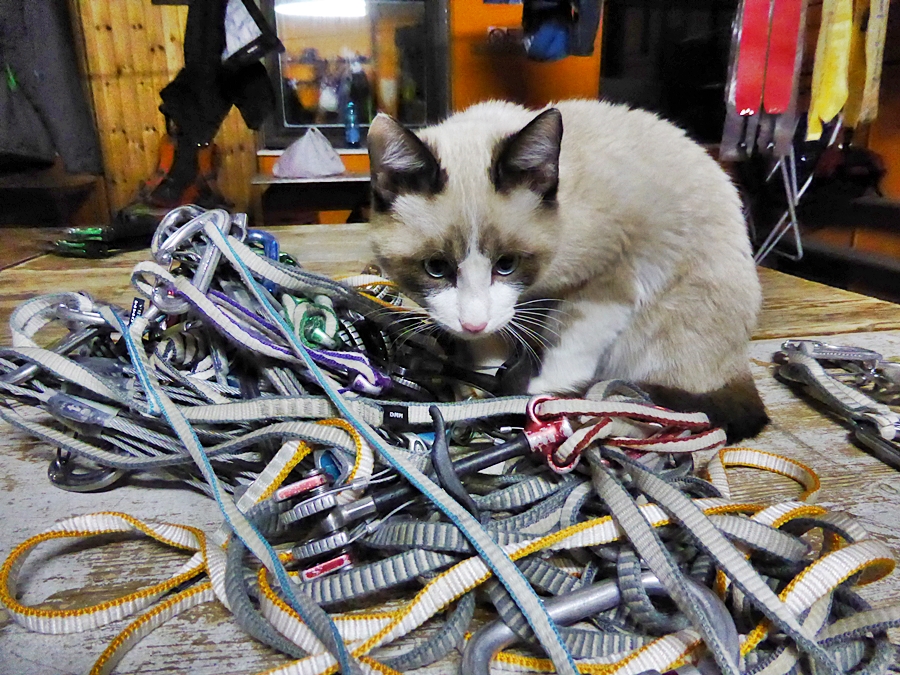 Torino Cat helps with the rack.

2 Responses to The Countdown.