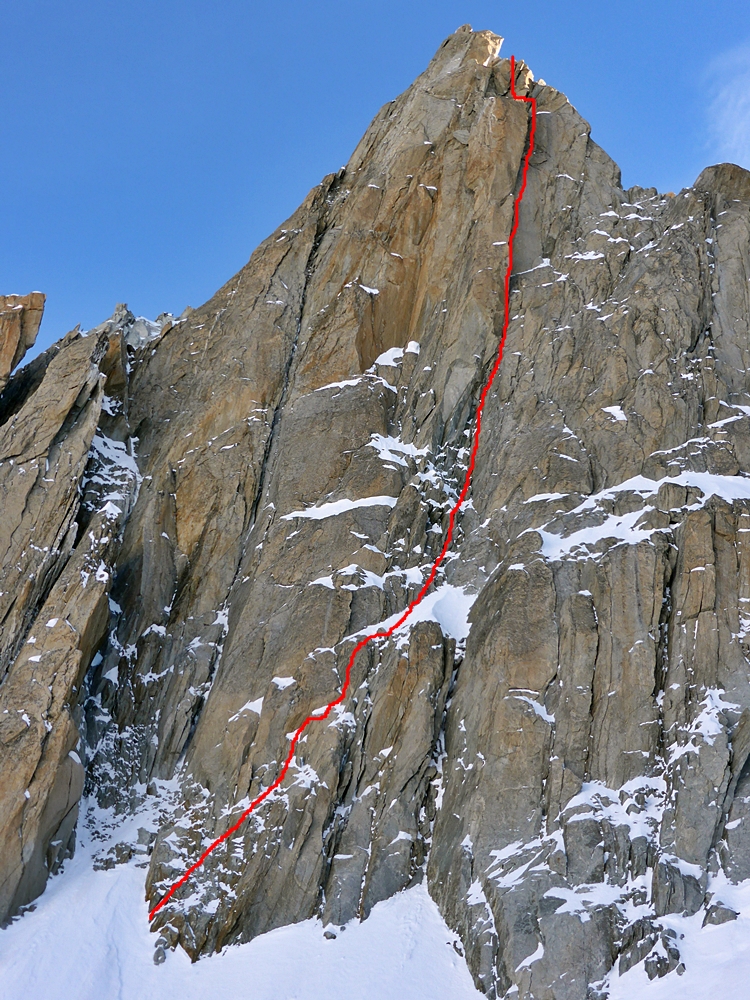 In a week where innocent people are shot down in Paris for expressing their cartoon  feelings and then, several hours later, more killing – four innocent hostages and three fundamentalists are shot, also in Paris, it makes writing about a personal experience in the form of a climb, somewhat trite. How the hell as climbers do we continue to stick our heads in the rock and continue like nothing bad is going on out there and why do we continue to spray about something, which on the grand scheme, is pointless and serves no value?

I have never studied in-depth, the news, politics, economics, facts, figures, numbers, philosophy. I have never been able to get a grip of think tanks, meetings, suits, offices, scales, sales, shiny shoes, graphs, policy. Yes, I am ignorant. I am also a person with feeling and emotion; I am a human being and because of this I can tell when something is correct and when something is morally wrong. Is it right to kill people… and by this I mean all people, no matter their religion, nation, colour of skin, beliefs –  personally I don’t think it is. I believe the only way to move on and get somewhere is by listening, attempt at understanding, compassion, forgiveness, openness. In my mind, an eye for an eye solves nothing, it does not bring peace, it’s an out-dated philosophy.

Since returning from a climb on the Tour Ronde, I have heard and read racism and xenophobia, its rampant. Not everyone who is Muslim and practices Islam is a terrorist or a fundamentalist, one of the two policemen protecting the cartoonists at Charlie Hebdo, Ahmed Merabet, killed at the hands of the fundamentalists, was Muslim. There is no need to call for everyone from a certain religion, faith, background, country, to be herded together and bombed and I would appreciate anyone who knows me, not to express this line – it is racist, small minded and solves nothing – what it does is escalate hate and violence and intolerance and I want no part of it.

Maybe the questions I raised at the start of this piece are worth reconsidering; maybe climbing and climbers are a small voice of obsessive sanity amongst all of the madness. Maybe the world should begin climbing and then, maybe we will have arguments about bolts and ethics and style, but no one will be shot and racism and xenophobia will be a thing of the past?

On Thursday 8th of January, the day after the Charlie Hebdo attack, Matt Helliker and I stood beneath the West Wall of the Tour Ronde. The glacier was silent. Peaceful. The West Wall – giant brown granite flakes and pillars stood proud and upright, an erect middle finger, a massive up-yours to all of the craziness and racism and for once I didn’t feel guilt. Separation from everything going on out there, gave me faith in my difference. Being in a wonderful white land, surrounded by mountains that were neither racist, xenophobic, hateful or calling for retribution, gave me hope. Each to their own as long as no-one is hurt, but people are being hurt, the world at this present time to me appeared mad –  long live personal challenge, the challenge of human spirit and the fight against gravity – climbing had suddenly become sanity.

Tim Neill and I had attempted this line earlier in the winter but after three pitches we bailed – the climbing had been difficult and committing, there was a certain amount of loose rock and there appeared to be much more difficult climbing above our high point. I would not say I was obsessed by the climb – which after study, does not fit into any description of established climbs on the West Wall and is possibly new – but the soaring overhanging corner promised a commitment of a certain kind and because of this it very much appealed.

Matt set off climbing the first two ‘warm up’ pitches and rapidly established us in the centre of the wall. I climbed the third, difficult pitch, – overhanging, tenuous, technical, something similar to the pod and crux of the E4, Void at Tremadog, with the odd loose block thrown in. Having climbed the pitch, I hang from the belay, still in place from Tim and my the previous high point, and look above, my guesstimate of two more pitches and not as difficult may have been naive, but like most things in my life, I preferred hopeless optimism over gloom and despair, it is this optimism that has seen me step from the ground on many climbs.

The second attempt at the climb had hit a few hold-ups, today was Wednesday, Matt and I were hoping to have attempted the climb on Monday, but Helliker had hit melt down and when he had messaged me at 11pm Sunday evening, vomiting and wasted, we  had to hit the pause. Today was Thursday and now I had a recurrence of a chest infection, but I have never been good at sitting and waiting and even the night before, lying in a sweat filled bed, I knew no-matter, opportunities had to be grasped.

Matt climbed a short overhanging chimney and belayed to the side of an overhanging corner sprouting loose granite needles. As I set off to climb an off-width, which sliced  a steep slab to avoid the sea urchin bristling from the corner, Matt suggested taking the clean wall above and to the right, but this I’m sure is where the established rock climb goes and all said and done, the line was the corner; anything else was copout.

The fierce light of the sun hit the wall, but it was shown short-thrift by the bank of cloud clinging to the summit of Mont Blanc. I hung from picks hooked behind wobbling blocks and hoped they didn’t prize free – there would be no redemption should anything rip – and with each cautious hook, strenuous pull and forced inhalation of breath, breath held inside burning lungs, the death and destruction happing elsewhere in the world was put on hold. I fully embraced, but beneath the surface was the same old guilt, why me, why this life, why not starving, poverty, an office, a factory, a prison cell, a doorway, mental illness. I suppose we all have our crosses?

Matt climbed the continuation of the corner for fifty metres and it was as technical and difficult and as committing as the two previous pitches. I stood belaying in a small cave, blocks wedged into the corner were suspect and I was in the fall line. Behind me snow ravaged the Grand Pilier d’Angle and Mont Maudit had disappeared behind a wall of cloud that was driven by strong winds. When we next met,  Matt was hanging beneath a roof at the top of the corner, it was dark and snowing – the wind gusted and I felt wasted. “Are you ok to lead on?” Matt asked. I felt like saying, ‘No, of course I’m not,’ but grabbed the gear and set off sensing the end was close.

An hour later, standing together on the crest of the West Wall, the climb was done but the wind was gusting as if we had offended. Snow curled in a speeding cloud of spindrift that whipped over the whale-back ridge and it lashed soft skin and scraped eyes. I felt as blind as some of the people whose comments I had read on Facebook before starting this climb.

At 10pm, after abseiling into a maelstrom, we reached our skis and at midnight Matt and I staggered into Refuge Torino after being beaten by gales and snow and whiteout. When I told Jon Griffith I wanted to attempt this climb on the Tour Ronde, he hit me with an amusing comment and now that comment fizzed  in my brain like Coca Cola, “Nick, why do you want to go to the Tour Ronde, the Tour Ronde is for a Conville Course.” I had never attended a Conville Course, but if this is what they involved, it was obvious I had missed out – sign me up please.

When I woke and staggered from the bedroom at 8am, I was surprised to find the refuge buzzing with people – it turned out E.N.S.A. had based themselves at the hut on the ski test for aspirant guides and as I walked to the toilet I was asked where I had been climbing. I replied The Tour Ronde. “You need to go downstairs and inform the hut warden you are safe, a rescue has been called for you.”  I was shocked and still very asleep and I didn’t immediately move and replied, “Well we didn’t ask for a rescue.” I was told with short thrift that if I had needed a rescue, I would have been quite pleased to have received one, which I suppose was fair, although given the weather it was pretty obvious there were not going to be any rescues happening too quickly. It turned out that Patrick Gabarrou who had been climbing in the cirque had seen our torches high on the Ronde and given the weather, thought it advisable to inform the rescue that they might be needed. Fortunately they weren’t. Its always good to meet one of your hero’s and find he is caring.

Fear appears to be a large part of society today in Europe, fear of missing out, fear of not having the latest electronic item, fear of being unemployed, fear of cultures that are different from our own, fear of being different, fear of actually living. In these mad times climbing, something pretty pointless, gives distraction and purpose and helps me, as an individual, actually put things in perspective, it helps me look from a different perspective. The world has always had something mad going on and will continue to do so and I’m sure once the shock of this latest atrocity has passed, the majority who are fortunate and privileged will get through and continue with life, a life that should be for living and loving, not fearing and hating.

After reaching the crest we down climbed snow to the left, (facing out) and abseiled the spur on the left (facing out) of the line of ascent where we found two in-situ anchors. 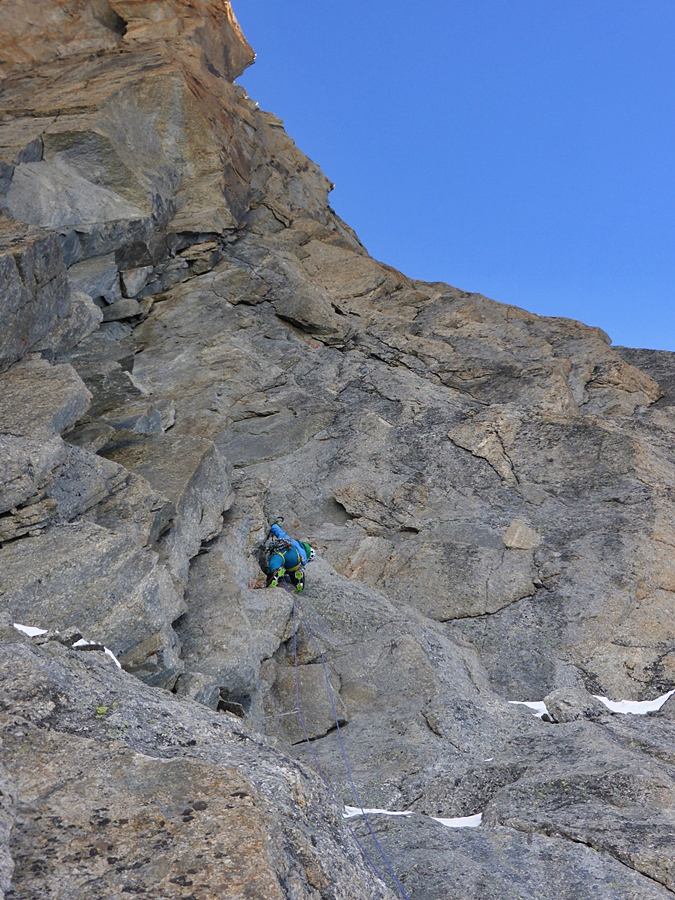 Matt Helliker taking us to beneath the corner on pitch two. . 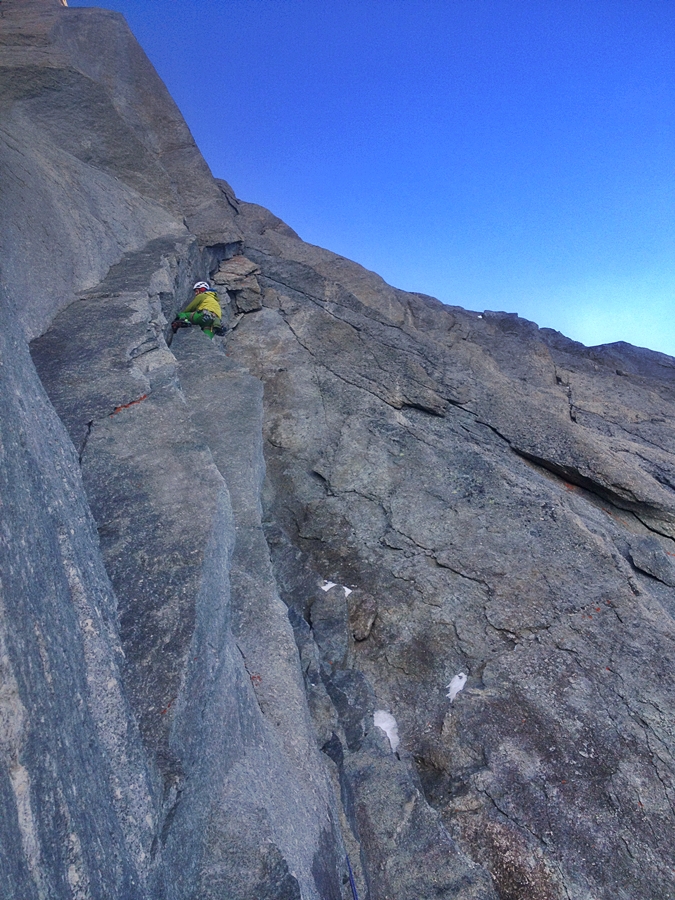 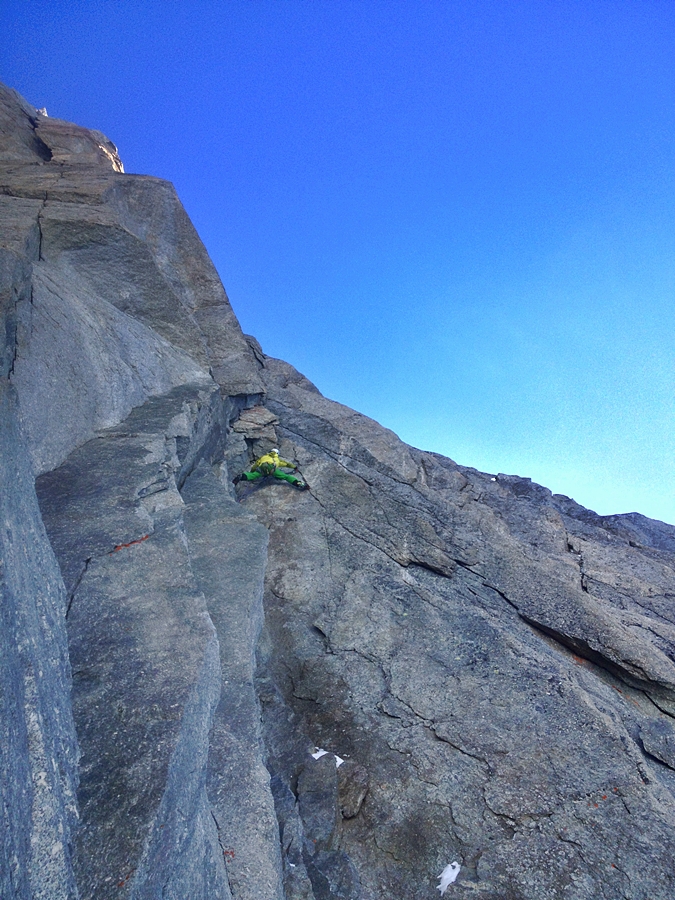 Difficult moves right to the bottom of the flake/crack. 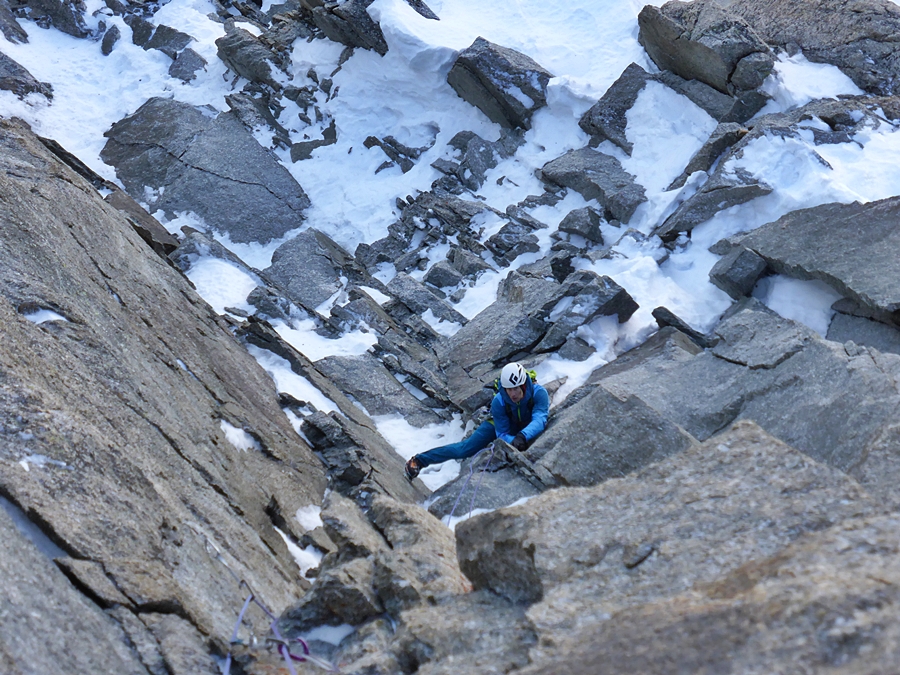 Matt Helliker before entering the Void like pod on pitch three. 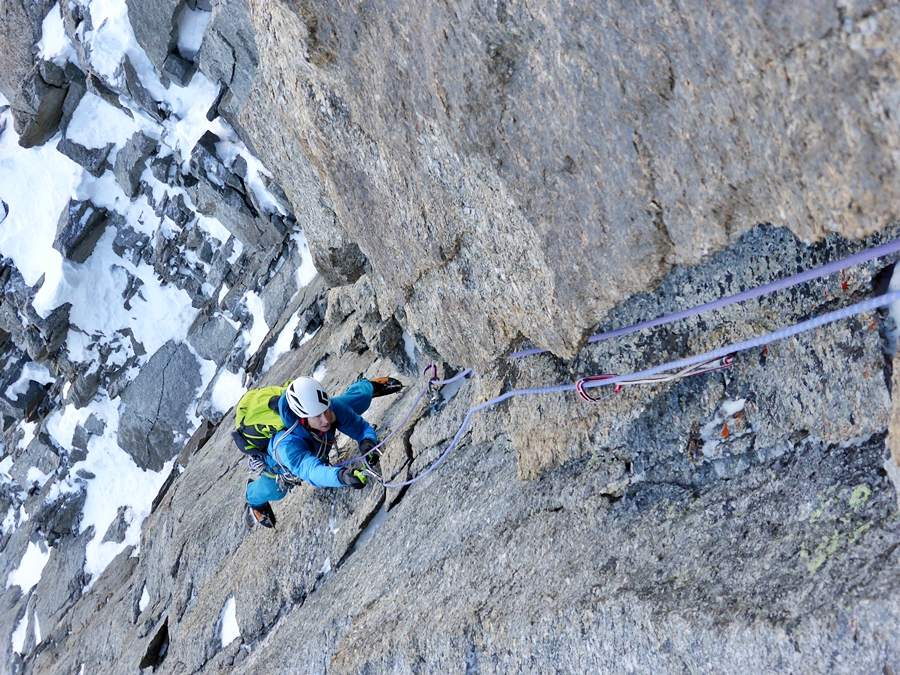 Matt seconding the technical moves, moving around the roof and entering the flake/crack. 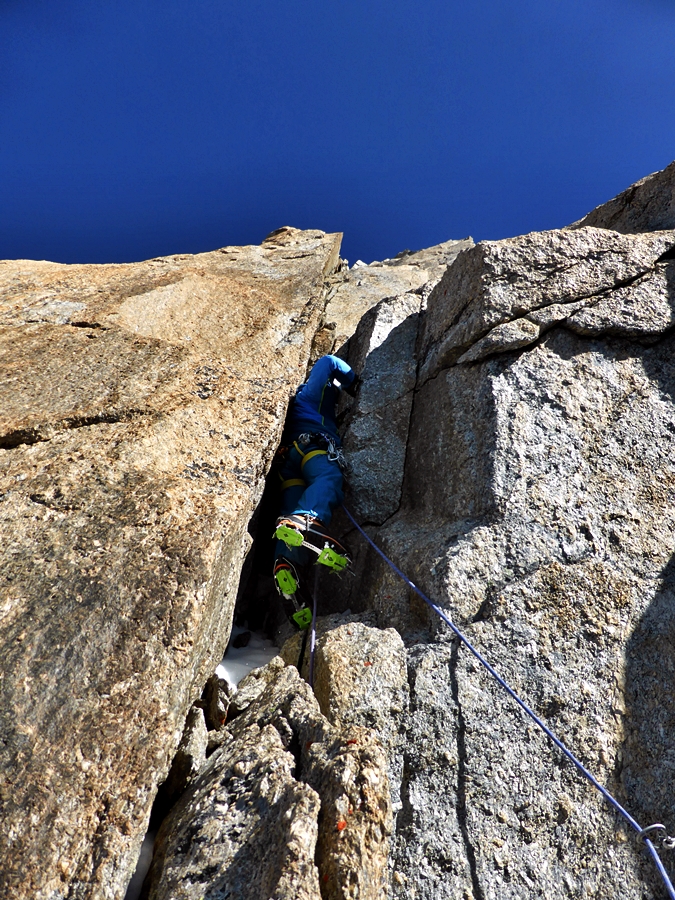 The easy short pitch 4 of the flake/crack. 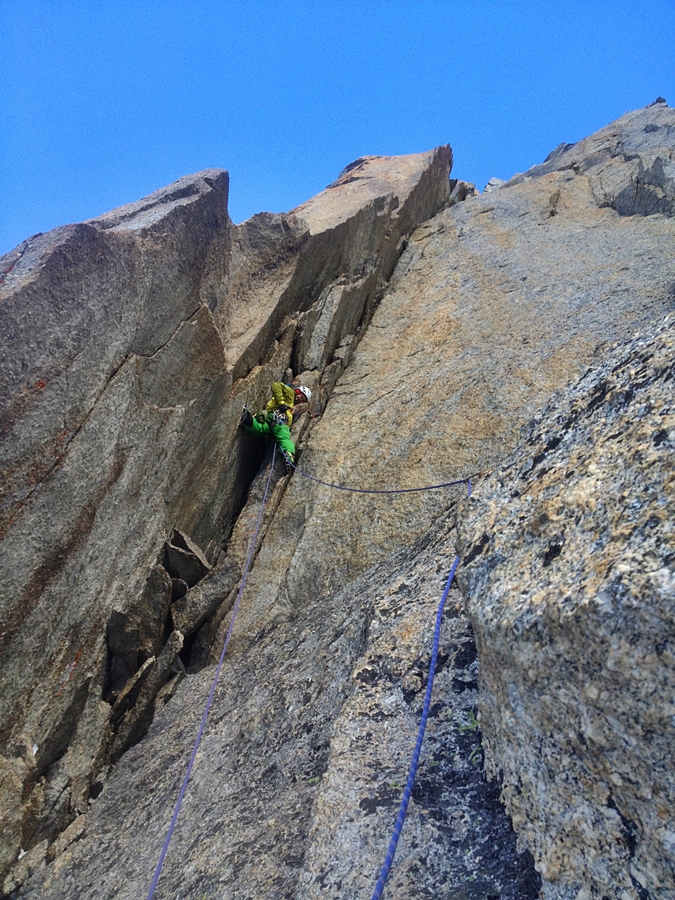 Climbing the corner (obviously!) of pitch 5. 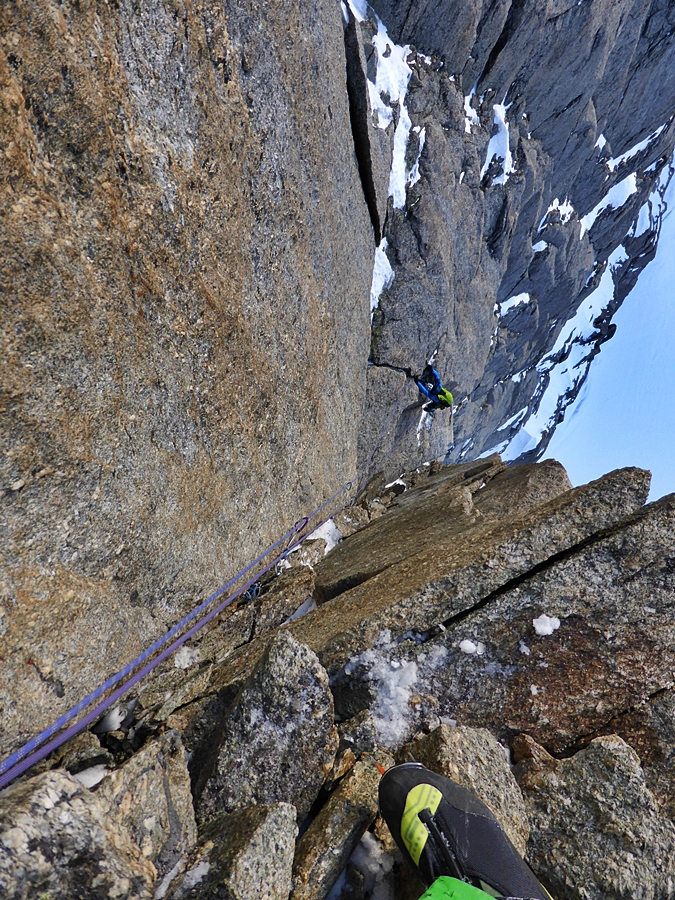 Looking down to Matt climbing the off-width of pitch 5 before traversing left above the Sea Urchin and climbing the corner. 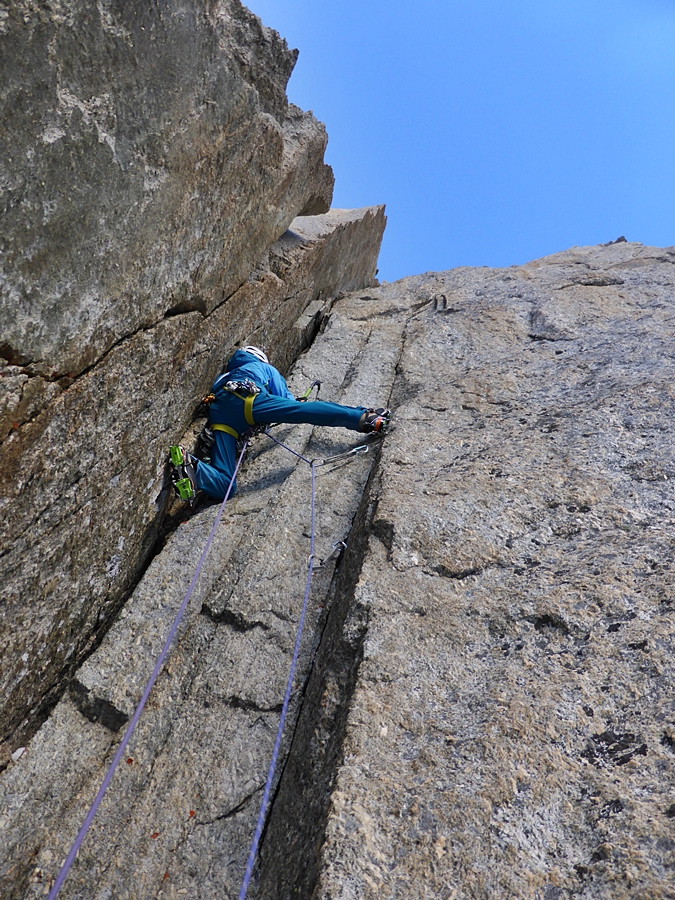 Pitch 6, Fortunately Matt climbed this really technical 50m pitch while there was still daylight. Unfortunately I did not! 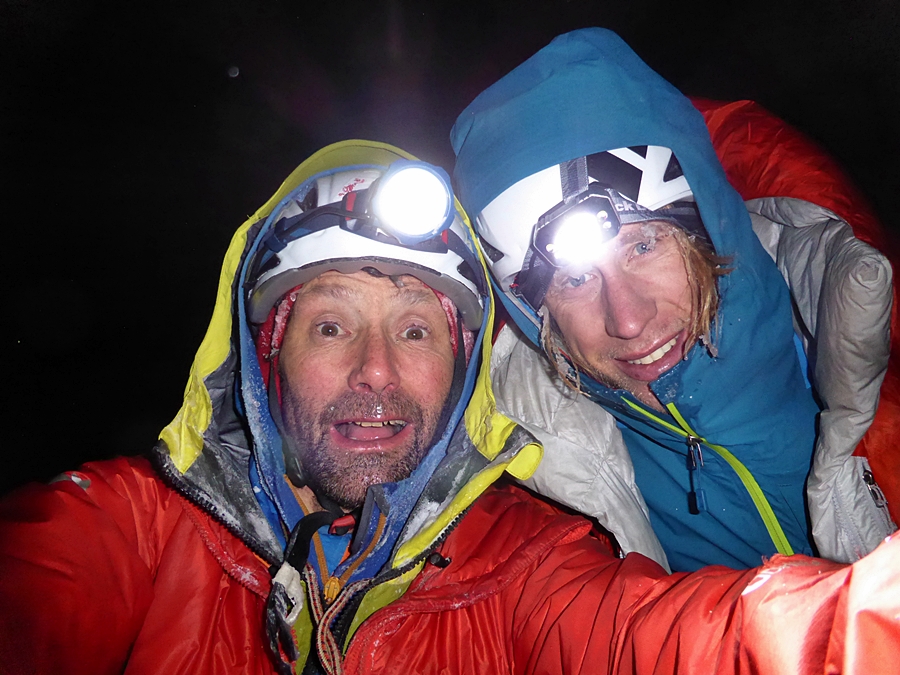 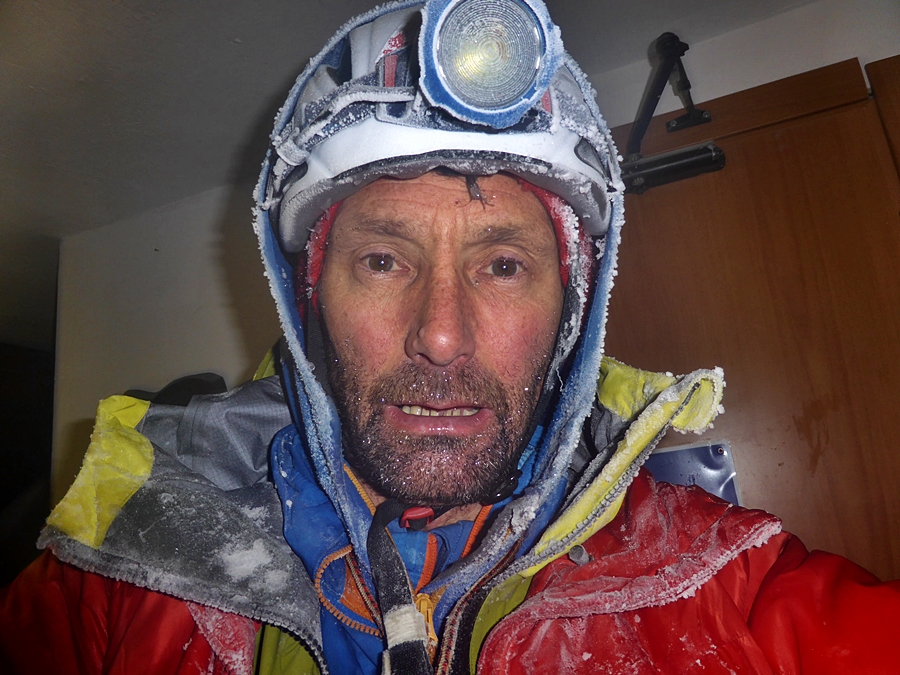 Midnight after a slightly harrowing and challenging skin to the Torino. Maybe I should have done a Conville course to prepare me for this experience!