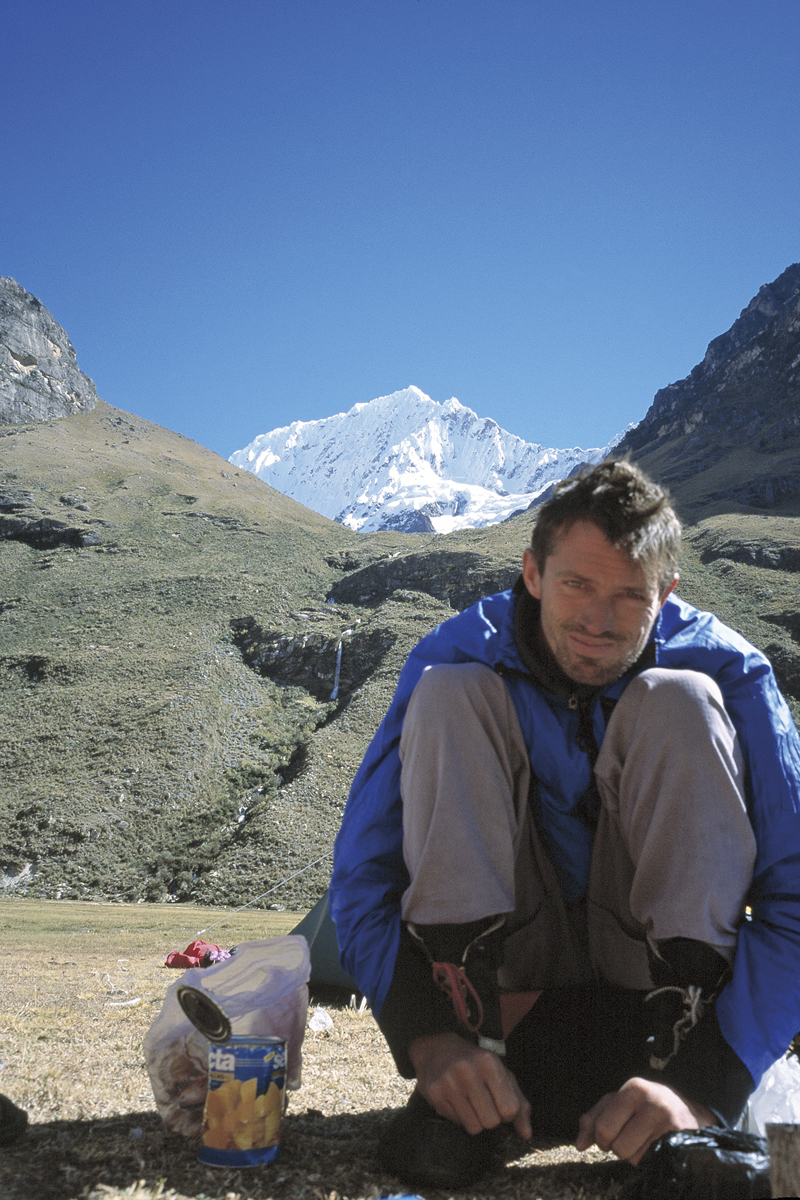 Al Powell holding his frost-nipped toes after a three day push on Quitaraju.

I was approached a while back and asked if I would write “a couple of sentences or more,” to be included in an article about the changing face of British Alpinism.

The first thing that came to mind was how is it possible to put into ‘a couple of sentences,’ and give a true and reflective answer to such a grand and subjective topic and the second was, if I am to be quoted in a couple of sentences and then my words are to be surrounded, dissected, possibly pulled apart, I may as well write the article myself, or at least, I can give my opinion and the message will not be used out of context. I’m sure this will not happen, but it’s difficult to be approached and then only give a very short answer. Below is a serious but slightly tongue in cheek look at the question, what is and what is not alpinism.

My immediate reaction was to answer a question with three questions of my own:

Is there a changing face of British alpinism and if so, when is it changed from and what has it changed onto?

In the time I have climbed in the European Alps there has only been a small group of people involved in what I would call alpinism and it appears to be similar now. In my experience there is possibly an even smaller group of people at the moment than when I began climbing in the Alps, but this number of course will fluctuate. But, to really get to the heart of the question, or for me, the more interesting question should be, ‘What is Alpine climbing?’

The climbing of the Alps or any equally high mountain ranges

What is alpinism? A subjective question and one that will mean many things too many people and because of this there will be many answers and of course who is to say which answer is wrong or right – there is no definitive answer, the true answer remains with the individual. The glitch comes when one person sees more value in their take of what is alpinism and possibly feels a less worthy style is receiving unjust credit. This also brings about other questions; why should this affect people, why should people getting credit from a different style of ascent concern and annoy?

What I see as alpinism is a lot deeper than The Free Dictionary definition suggests. Alpinism to me suggests certain ethics, or it could be called self-imposed restrictions which add to the challenge and experience and make the activity, in my mind, and the minds of many, much more rewarding. Alpinism for me is the activity of approaching via walking or skiing or paraponting, to the base of a large mountain face, climbing a route in a single push – going from the bottom to the top without returning to the bottom until what is designated the top is reached. The climb will finish on a summit ridge or a summit while everything you need is carried on your back. The descent can be down the line but it is more aesthetically pleasing to descend a different line and into a different valley than the one used for the approach and ascent. Generally the line chosen will require at least one night sleeping at the base of the face, on the face, on the summit or sometimes in a hut before or after. There are some very fit and skilful Alpinists that appear to be operating on a different level than almost everyone else; these people are able to climb big routes very quickly without needing to bivouac, this also counts!

Under my own definition, Alpinism is not any of the following, but let’s make it clear, I’m not saying I don’t take part in some of these styles of mountaineering, what I’m saying is, in my mind it’s not alpinism in my understanding.

Bolted clip ups are glorified sport climbs at altitude. Undoubtedly fantastic technical and personal achievement and very worthy of recognition, but this style of climbing on alpine faces is as far from alpinism as love is from spending the night with a prostitute.

Ascents where hundreds of metres of rope are fixed and beds, sofas, fridges stocked with a week of food, big sleeping bags, big jackets and all of the comforts of the valley are transported to the cliff-face and pitches can be redpointed is not alpinism and the reason it is not is because alpinism is the ticking clock, the countdown, the time-bomb. Alpinism is the shift in the weather and the internal psychological battles that comes from looking up and seeing a mackerel sky reflecting from stipple cloud. Alpinism is a flip of the stomach when out on the horizon a flash of lightening flicks the switch. Alpinism is the seemingly never ending night and the seemingly shortening daylight hours. Alpinism is uncertainty and worries and fear of becoming crag fast and deep routed thoughts of escape. Alpinism is dwindling mental strength and depleted physical energy. These factors are almost deleted by fixed rope – it’s a game changer, it takes away what for me is the true essence of Alpinism, being committed. My old mate Al Powel always used to say if jumars are taken its not alpinism.

Alpinism is not cragging.

The main concern and constricting factors for someone climbing in true alpine style, and the worry about getting up and over are not really an issue when cragging in the Alps and often, even the top of the route is forsaken in preference to catching the last lift. Not only is this not alpinism, it’s certainly not climbing the route!

The internet has changed alpine climbing and I suppose it has made the way for quick alpine hits where the outcome is almost certain. For a large percentage of modern alpinists, it appears there is no longer a mind-set or a willingness to take a punt with conditions, the weather and their own gut instincts which in my mind is a great loss. Sticking your neck out and taking a chance and pulling one out of the bag, for me, is one of the most rewarding aspects of alpinism. Maybe this is a reflection on a change in society as a whole where modern technology has dumbed down climbing and taken away much of the challenge?

Unless injured, catching a lift in a chopper to or from the mountain is not Alpinism.

Alpinism has changed and so have Alpinists. For many now it appears a nicely wrapped and guaranteed ‘adventure’ with a nice set of images to post to their Facebook profile or a super difficult and newsworthy, but super safe technical achievement without much in the way of discomfort and uncertainty or commitment is now considered the way forward. Call me a dinosaur, and many do, but the loser in all of this I feel is the participant but, there is of course a different alpinism to be found for the individual if it is chosen and the imagination is opened.