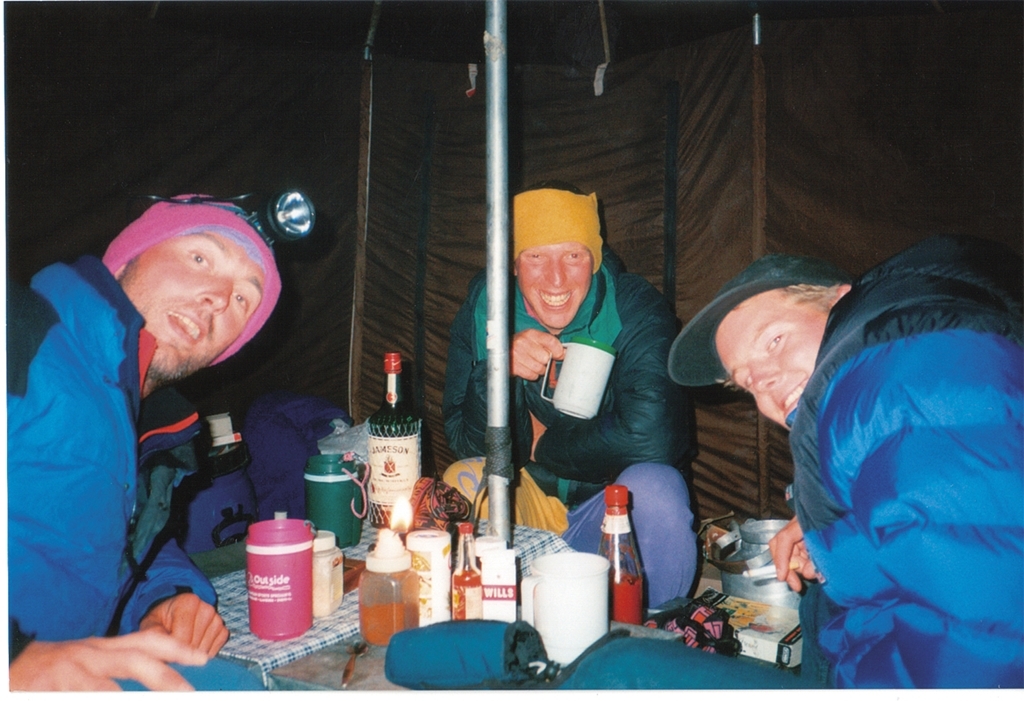 Keith Ball, Tim Neill and I stood in the col between Piz Cengalo and the Piz Badile. The space surrounding the Piz Badile’s huge North Face felt like a vacuum. The dark turned to grey and in the grey, we carefully climbed down – the space and the pull beneath the acres of granite were constant. I looked down to the col where, eleven years before, my close friend Jules Cartwright would have crossed with his client Julie Colverd. They had both fell and had been killed. I wasn’t sure how this mountain would affect me. The palms of my hands pushed down into dirt to take weight and my feet kicked steps. The dirt and rock moved hardly supporting bodyweight. Feral. Basic animal instinct. Survival. In the light breeze mist swirled, the mountain vortex, a minds vortex, a day, a week, a year… a split second … I thought of my friend who would have been forty years old now. 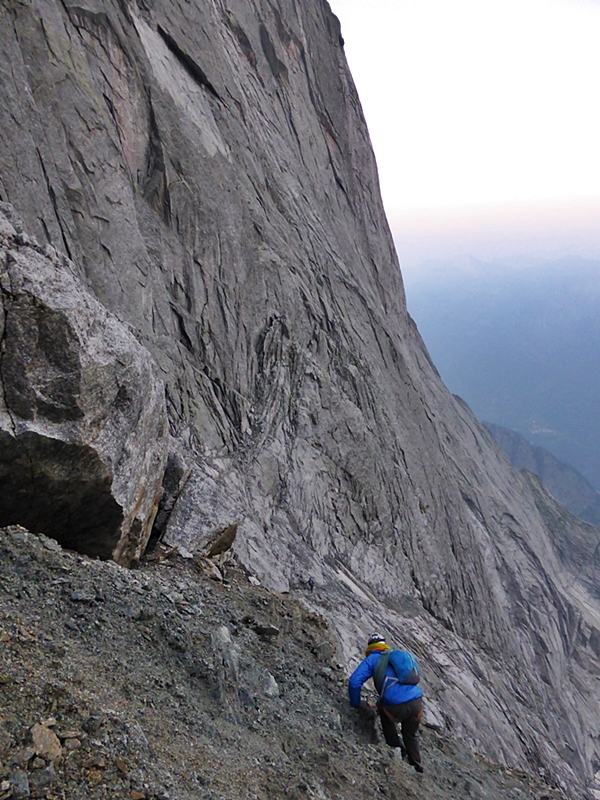 Keith Ball pushing down in an attempt to keep the slope in the place it should be on the descent from the col between Cengalo and The Piz Badile.

Tim had driven his well-used, black, VW Transporter from a stormy Chamonix the day before. Keith and I were packed beside in the front watching the windscreen wipers swish rain. We had walked three hours from the forested Val Masino in Italy, passing the Gianetti Refuge to gratefully – after hours on the move – relax and bivvi in the meadows beneath a massive sloping lump of shimmering granite, the south face of Cengalo. Boulders and grass and sheep and streams and red setting sun reflecting from behind the clouds – a heavenly haven.

The view from the Cengalo Bivi.

Tim and Keith were in front, kicking and pushing down. Rocks clattered and tumbled into the void, echoing and exploding. Dirt flowed like snow to cascade over the edge of the cliff and falling onto the rotten strip of snow hundreds of metres below. I looked across to the teams climbing the Cassin down below and to our right. We were aiming for the left side of the north face of the Piz Badile to attempt a seldom climbed route called the Peoples Direct. I hoped the climb would feel less intimidating than the approach.

Relief consumed as we made it to a point that followed a series of flakes heading into the granite wilderness. “That was fun.” “No, actually, it wasn’t.” 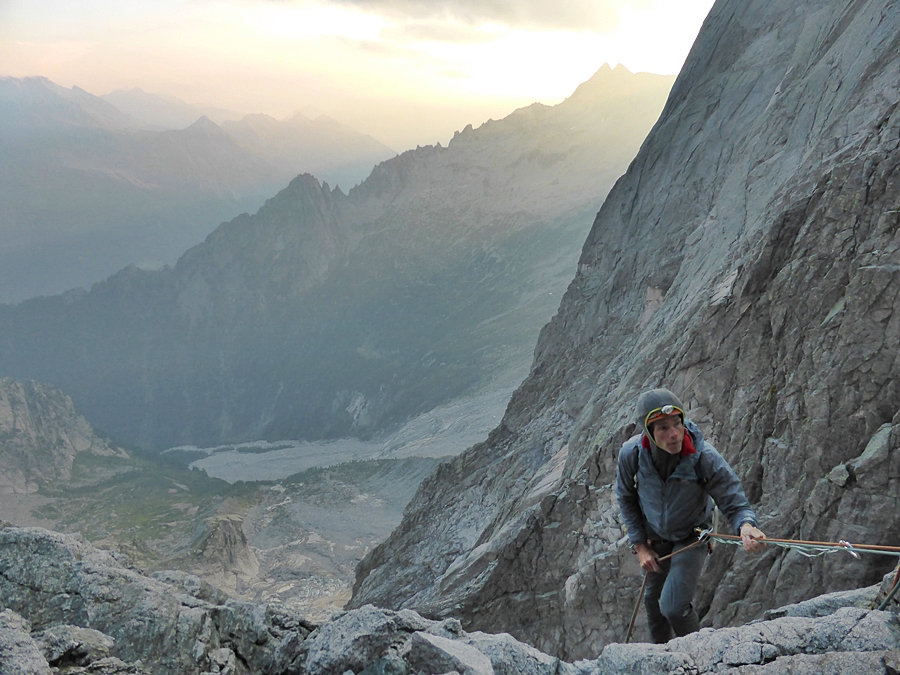 Tim Neill abseiling from choss to the base of the route, The Peoples Direct on the Piz Badile.

Keith tied on and started to climb. Seconding, wearing approach shoes and tied to a single half rope, my body twisted and turned, using smears while pulling flakes – high foot, rock over, pull. Pulling without first testing, I ripped the flake I was holding and then I was flying. The air and space grabbed. Quick. Quick. So bloody quick. I wondered if this is what it would be like? Fortunately the rope didn’t wipe Tim out who was above me and even more fortunate, Keith’s belay was bomb proof.  “Are you OK?” “Yeah, I’m fine.” I hoped the tremors running through my body did not extend to my voice. When I calmed, I continued, but now I would test every hold before pulling. 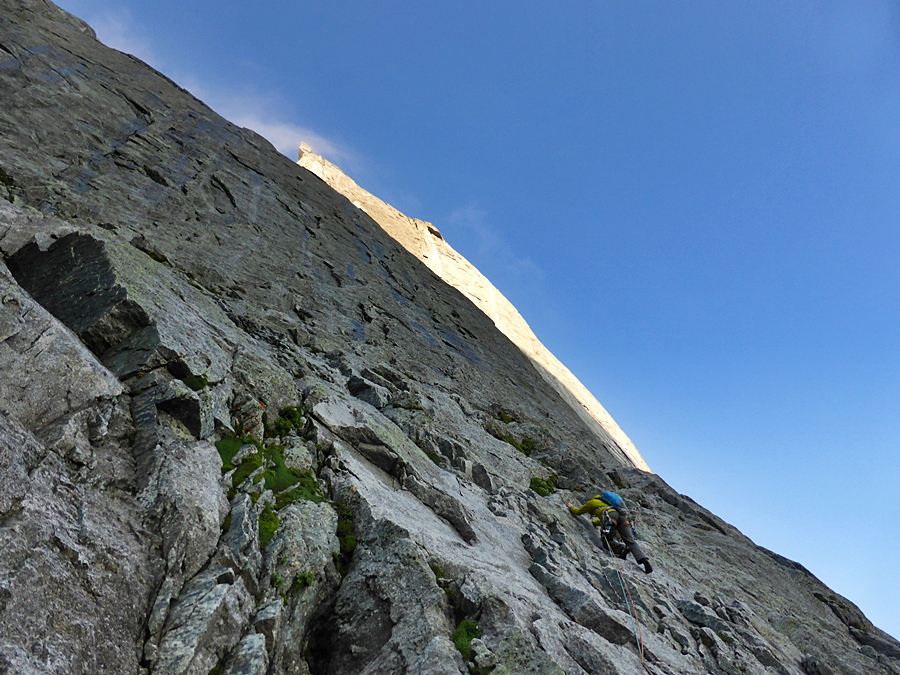 Keith Ball starting out into the wilderness. The Peoples Direct.

Creaking flakes and smears and cracks and streaks of water, old pegs with rings threaded through heads, faded cord. The cliff and rock and its history and the history of those who had been before were speaking. Clouds bubbled, but on occasion the sun broke from behind the cumulous and lit the face. The atmosphere lightened in the sun. Skin warmed.

Climbing in blocks, Keith led several pitches before Tim took over. The difficulty of the climb increased with height as the face barrelled. Undercutting a huge and booming flake, Tim moved fluently and confidently still in his approach shoes. It had been several years since we had climbed granite in Cornwall and on Lundy Island and I had forgotten how natural he moved across this rock type. I pulled close, “Tell you what, I’m struggling to get into the granite zone, the smears and the movement feel forced.” We both looked up to the overhanging crux corners high above, “Well, you better quickly get used to it” 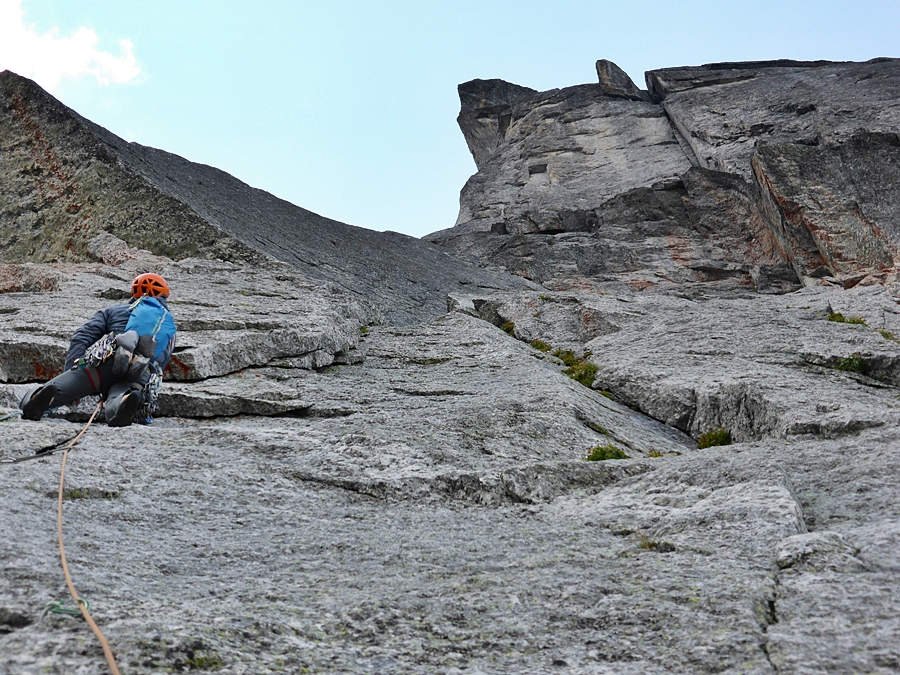 Tim Neill on the start of the steeper stuff of The Peoples Direct.

I settled down with the first of my block while climbing a vertical corner and wide crack which consumed gear as well as hands and feet. I was more comfortable on lead, more focused, more relaxed on the steep, and I was less intimidated by the space while squeezed within the confines of my corner – but the second pitch of my block was the crux of the whole climb and it was obviously going to be more difficult as the angle increased, leading to an overhang near the top of the pitch. The grade of this pitch was reportedly 7a+, a grade, when rock fit, as I now was, should not be too concerning, but high on a mountain, wearing a rucksack with wet and grass and loose rock and with the pressure of time, I knew this pitch would be tough to climb free. 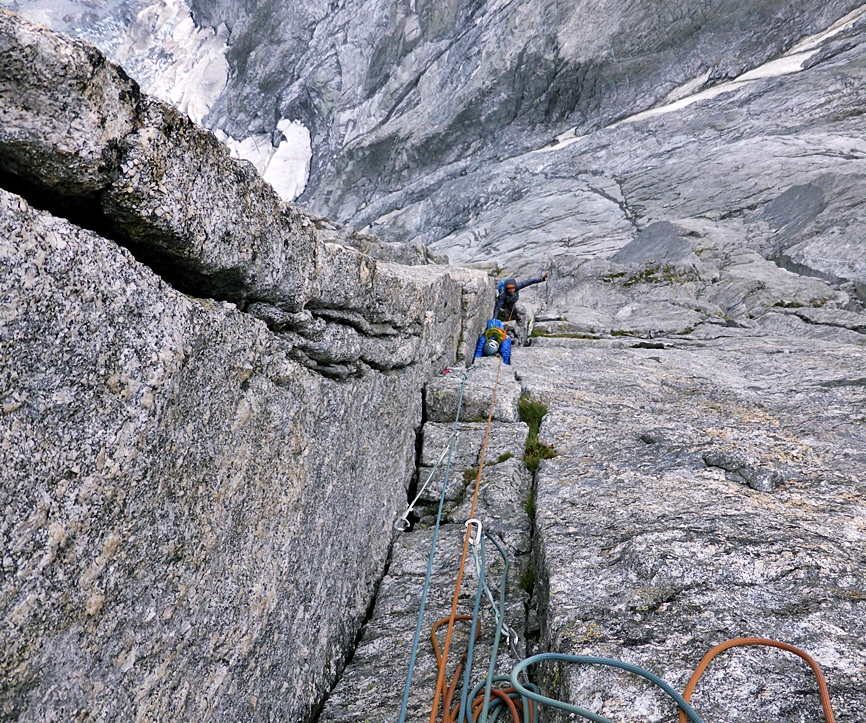 Keith Ball and Tim Neill seconding the first of my block of pitches on the Peoples direct.

Half way up the crux pitch, standing on a small edge, placing a cam and de-pumping while drying my right hand, unbeknown to me it was pouring rain. The rain was not hitting me or the rock but the crack and wall to the right of the crack was running with water. Smearing feet, finger locking and laybacking was going to take commitment and belief. I didn’t really think I had much hope to free the pitch, but as I began, the thought of pulling on gear didn’t enter my head. Finger lock in wet, half jams in wet, smearing feet on wet – I move up and up and up. For the first time on this climb, sweat began to bead. Shaking out, creeping, inching, placing gear, body tension – my Strawberries training had paid off. Every time I sunk and twisted fingers into a positive lock, I relaxed – my feet felt solid. Higher. Higher. The pump caught hold on the final pull over the roof, so, without placing anymore gear, I sprinted, laybacking until stood on a flat ledge. 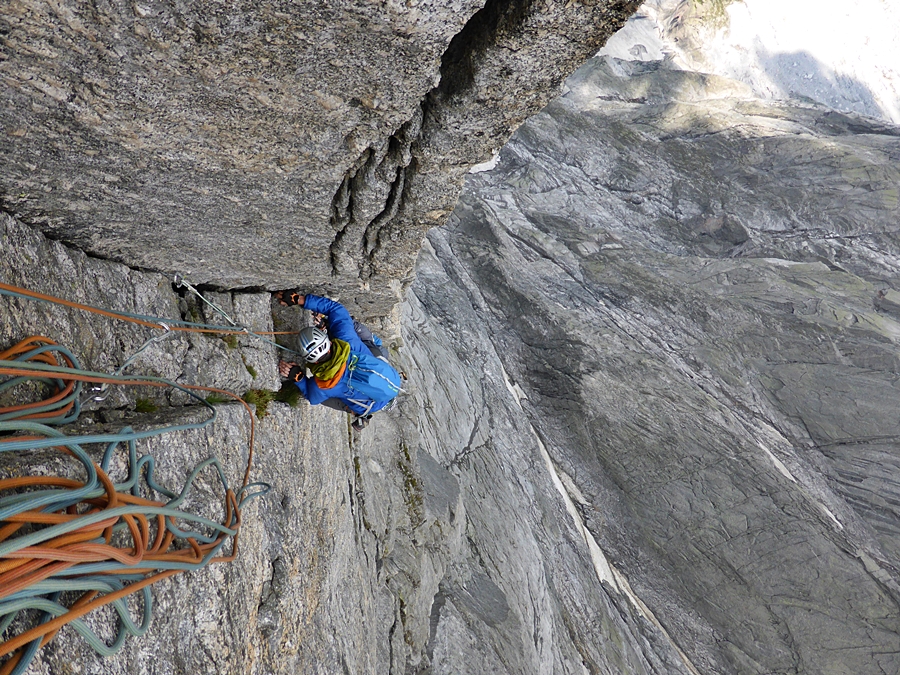 Keith Ball seconding the first of my block of pitches.

After another hard pitch and one more long wet pitch, all three of us stood on the summit ridge in the mist and rain, there didn’t appear to be any other life, no birds, no animal noise. In front, Tim and Keith hopped, walked and climbed, we moved un-roped consumed, enshrouded, until finding the descent line down the south side. 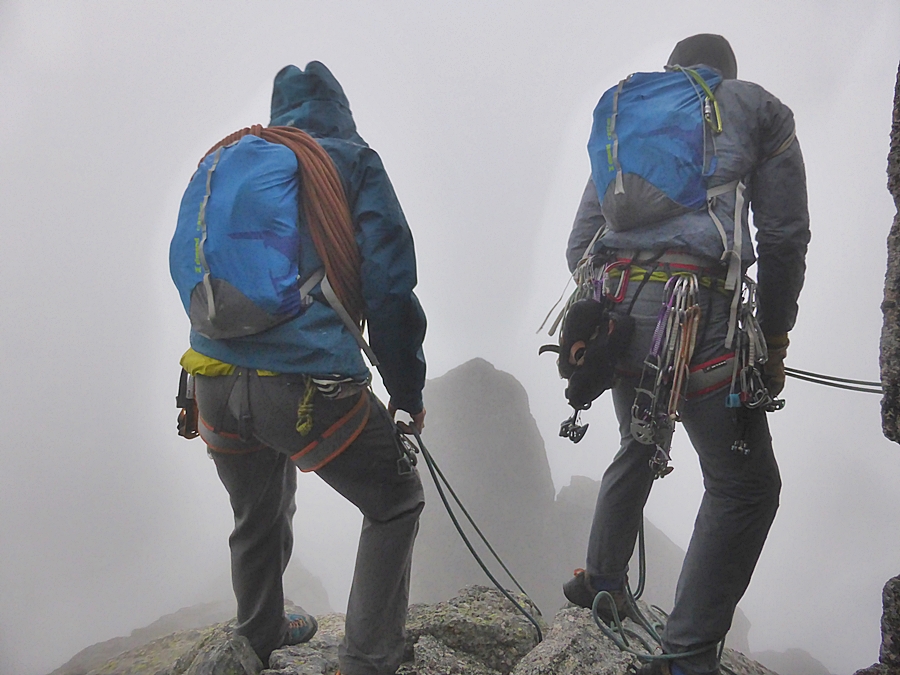 Keith and Tim trying to decided where we want to go on the descent.

It turned dark as we stumbled back into our bivi where we spent a night zipped against heavy rain. 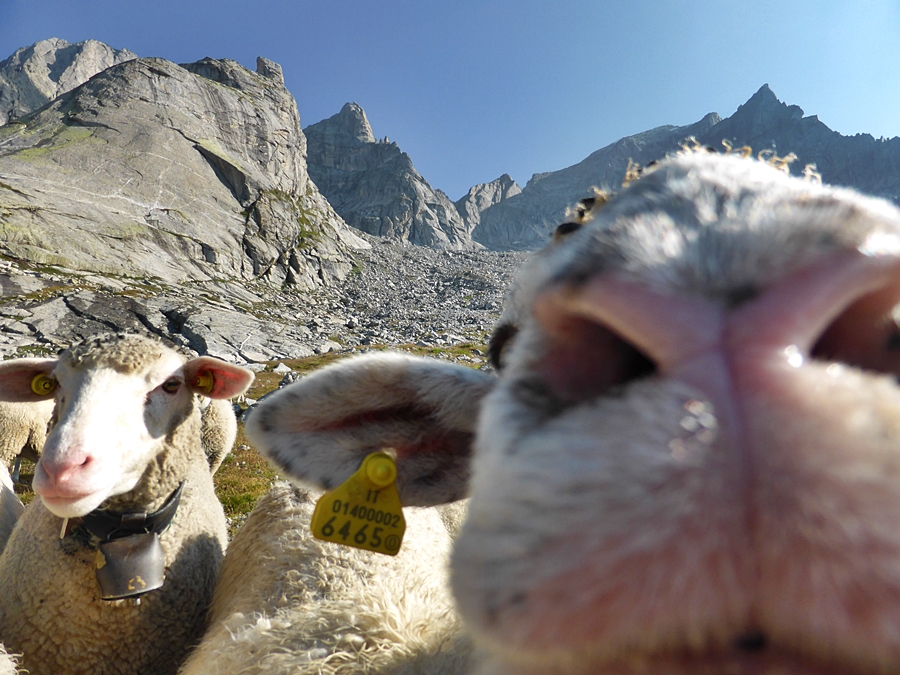 Visitors after the rain at the Cengalo bivi the morning after.

In the morning we reversed our three hour walk, sat in the sun with beer and pizza while joking about our language inadequacies with the waitress and drove the forty three miles to reach Bondo in Switzerland in the sunlit early evening. The river flowed against and around massive white boulders. Large pine trees butted the river and the track we were parked. Birds flitted, Jay’s screamed. The bridge where the path starts in earnest for the walk to climb The Cassin was a little way upstream. 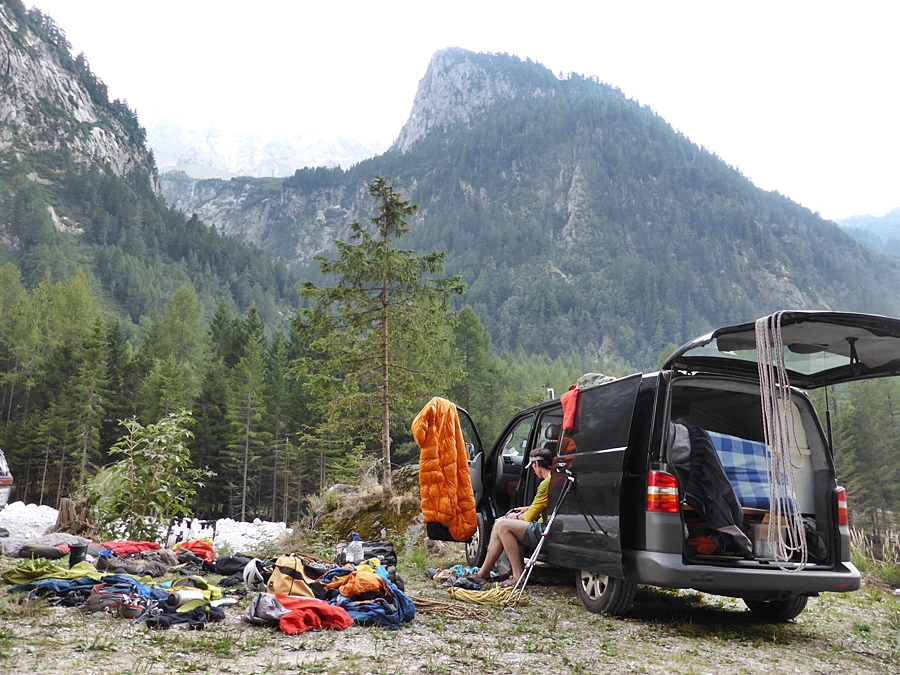 The second parking up/bivi spot at the head of the forest track in Switzerland.

The alarm was set for midnight, but the rain woke me at eleven. I crawled under the van with my head sticking out from beneath the plastic bumper. At midnight Tim stepped from the back and nearly stood on my head. It was still raining so we delayed for an hour and a half.

Walking through the forest, along the steep zigzag track, my headtorch lit welts cut from muddy clods. Even though it was only just past two a.m., it was warm and humid. The wet pine-smell filled my head. I looked down and imagined my friend, Jules walking this same path, stepping the same muddy welts, stepping the same polished rock, grabbing the same links of chain that acted as handrails, smelling the same pine, while cheerfully chatting to his client Julie, while never imagining this would be his last walk-in. The Grande Jorasses, the Grand Pilier d’ Angle, The Cobbler, Savoia Kangri, The Sans Nom, Mont Maudit, The Sharks Fin, North Stack Wall, Wen Zawn, Beinn Eighe, Ben Nevis, Teng Kangpoche, The Broadfield Pub, The Heights, The Vaynol, La Terrasse – I had walked to these and many more with my friend.

It was still dark as the three of us down-climbed and abseiled the notch at the base of the North Ridge. This was it; this is where Jules and Julie had fallen from. I felt air and space – solitude, emptiness, loneliness, despair, grief – my mind spun with all kinds of pain and regret and loss. This mountain caused a vacuum.

I caught-up with Tim and Keith who were flaking the rope beneath the first tricky pitch of The Cassin. It was still dark but in the sky, there were signs of daylight. 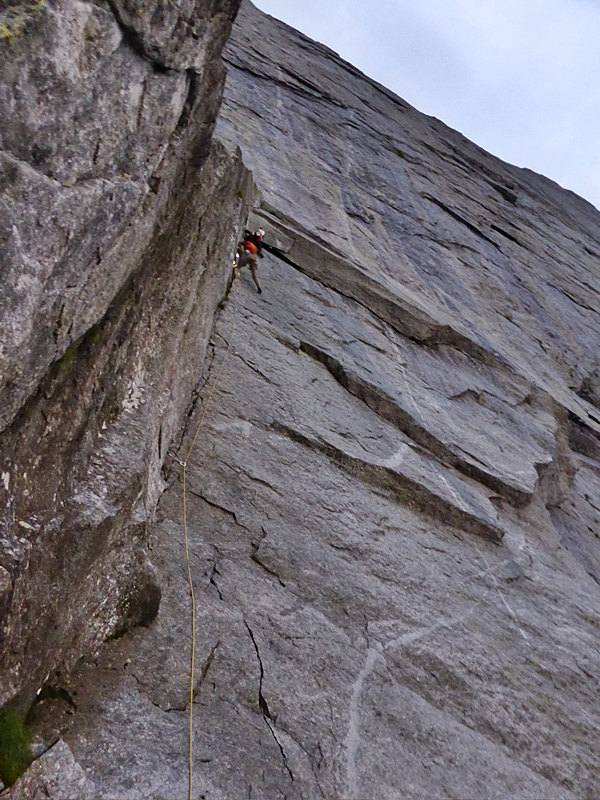 Tim Neill setting off on the first roped pitch of the Cassin. 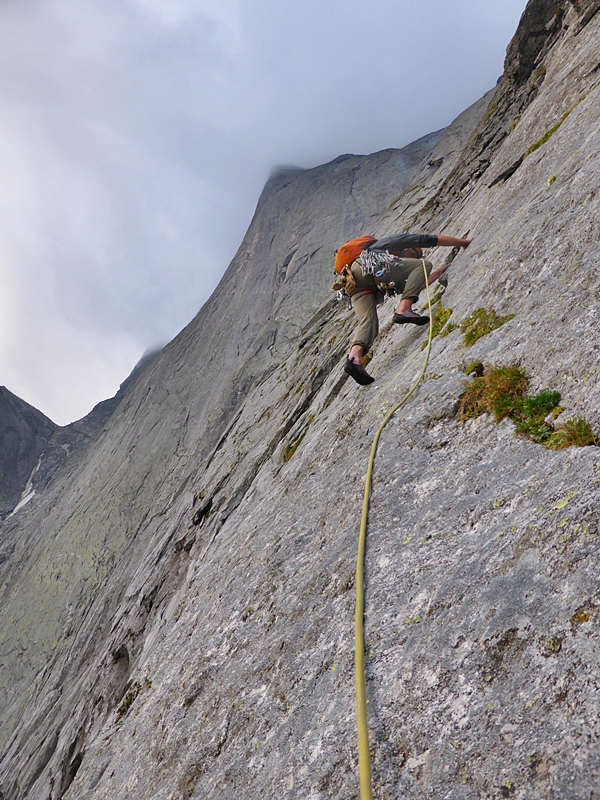 Tim Neill higher on the Cassin. 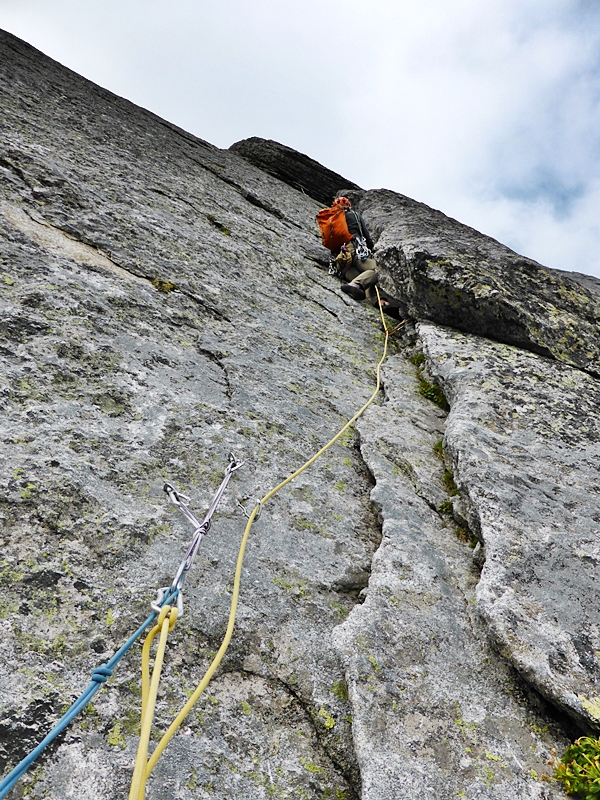 Tim Neill climbing another one of the technical pitches of the Cassin. 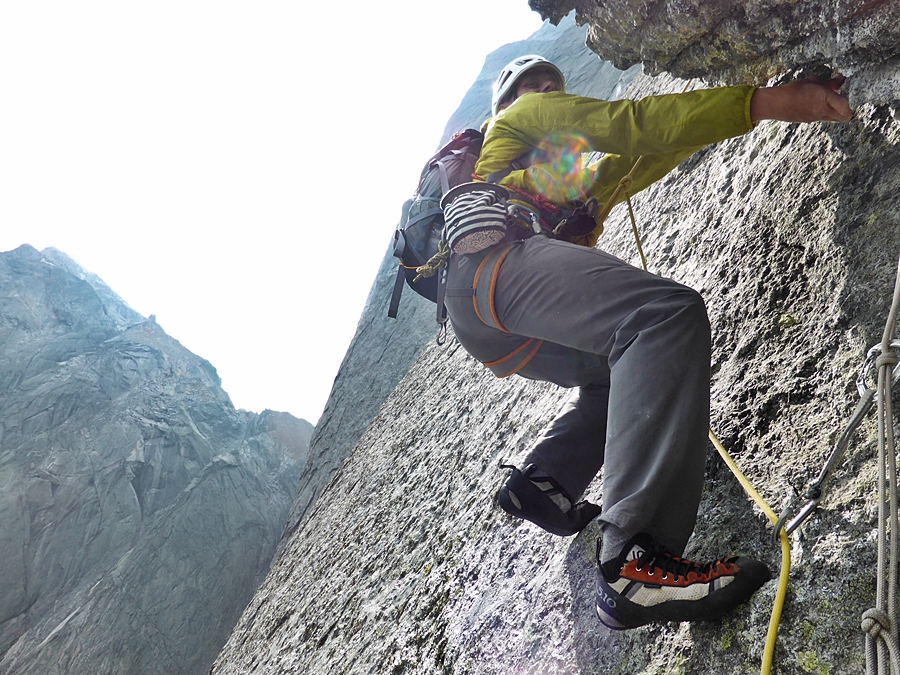 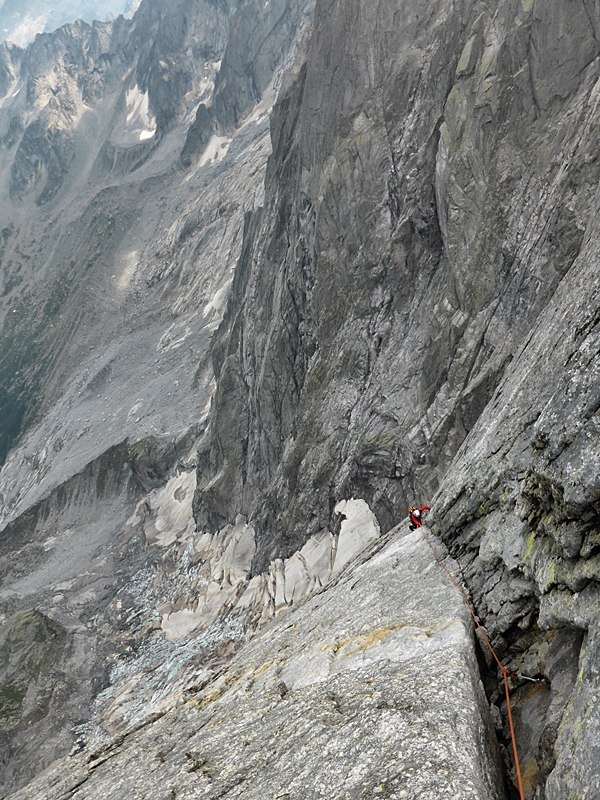 Looking down at one of the Austrian team behind us. Chatting to these guys added to the day as they were really friendly with great banter. 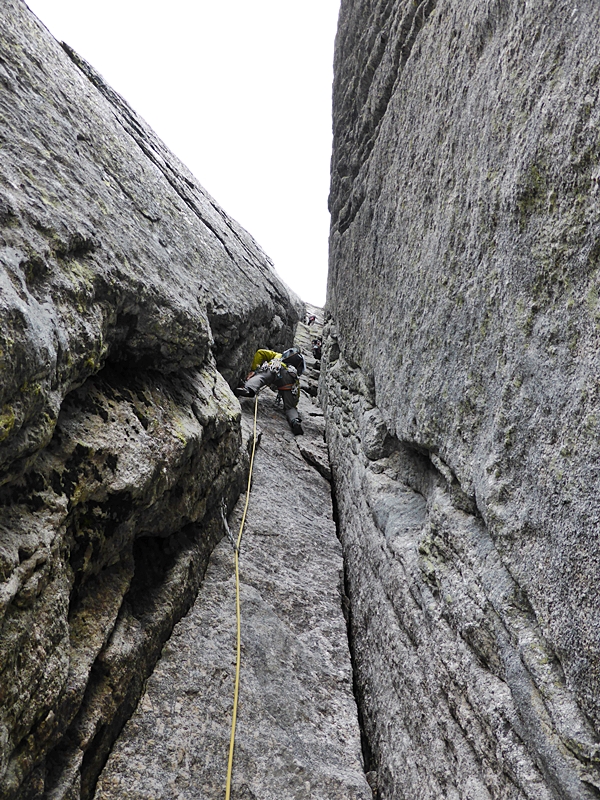 Keith Ball in the chimneys near the top of the Cassin. 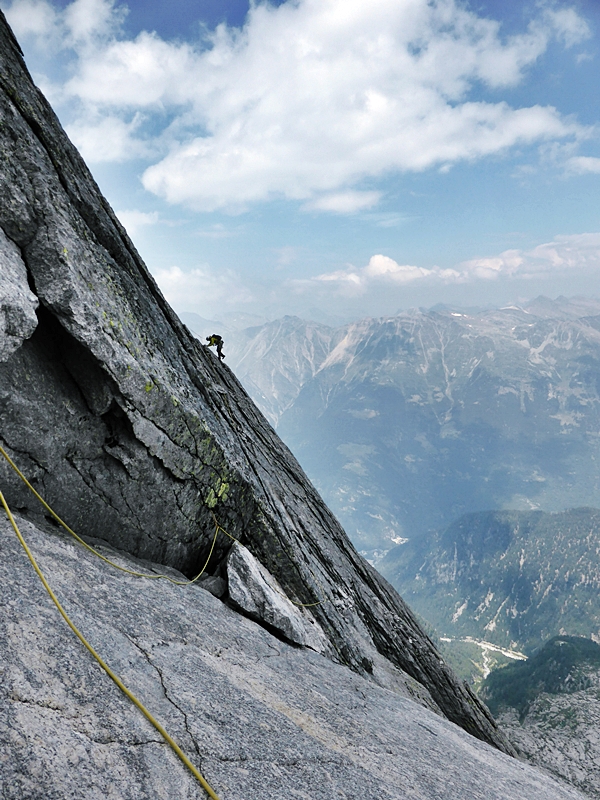 Keith Ball getting us to The North Ridge. 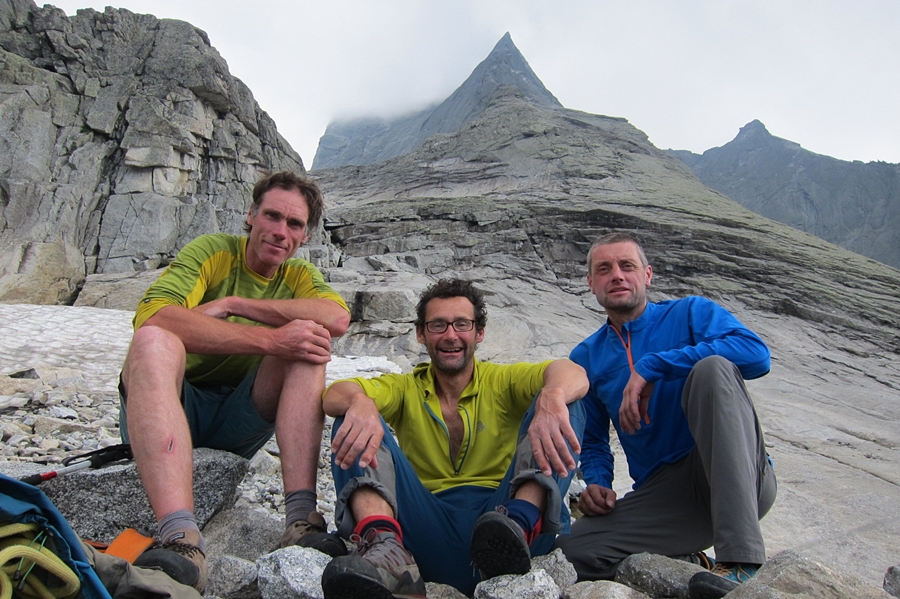 Big Tim, me and Keith Ball.

3 Responses to The Vacuum.