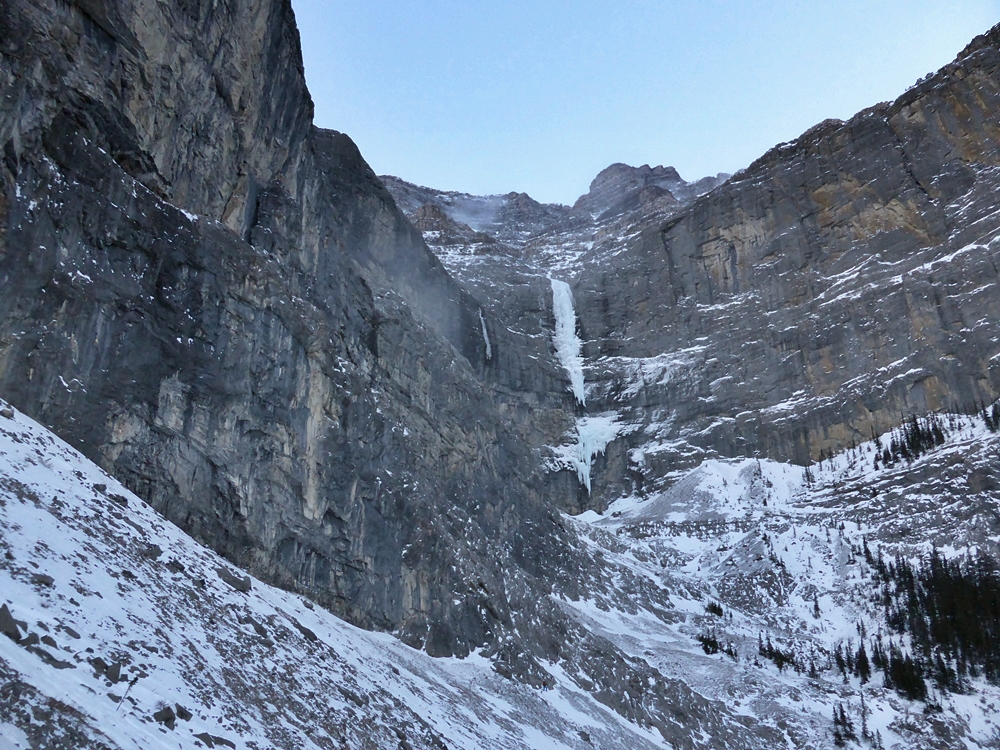 The Real Big Drip. The Ghost

Turning from the tarmac, onto the unmetalled and through the gates, Greg Boswell and I judder the cattle grid heading into the back of beyond. Driving the rented jeep, as it scutters toward the Ghost, I remember the last and only time I made this turn, through these gates and across this cattle grid, it was back in 2003 with Dave Hunter. On that occasion, as we juddered the metal bars, I looked left, and pacing the same direction, showing us very little thrift, was a Grey Wolf. He was huge, with feet so big, if they were islands, they would have had a population count. Sturdy legs propelled and dense fur shimmered silver grey. He swung his snout to lock us with orange eyes – eyes that glimmered intelligence, survival, ferral.

Dave Hunter and I were nearing the end of our three weeks of ice in Canada and had decided to take our small rented town car back to Calgary and request an upgrade, ‘we want to drive the Icefields Parkway.’ The upgraded was a silver Jeep that had chunky tyres, bash plates, diff lock and low ratio, but getting into the North Ghost to climb Hydrophobia and The Sorcerer still felt risky. Two days later the concern rattled through my brain as I swung  into steep ice, half way up Hydrophobia, because the silencing snow fell, making climbing the route, and driving out asap, paramount.

The 2015 rented Jeep, which I had christened Betty, had 4×4, but it was only that and the name Jeep which was common to the 2003 model. Betty’s tyres are M&S, which for the uninitiated isn’t a posh supermarket, it supposedly equates mud and snow, but in reality it should stand for mainly shit, only good for collecting the kids from their public school. 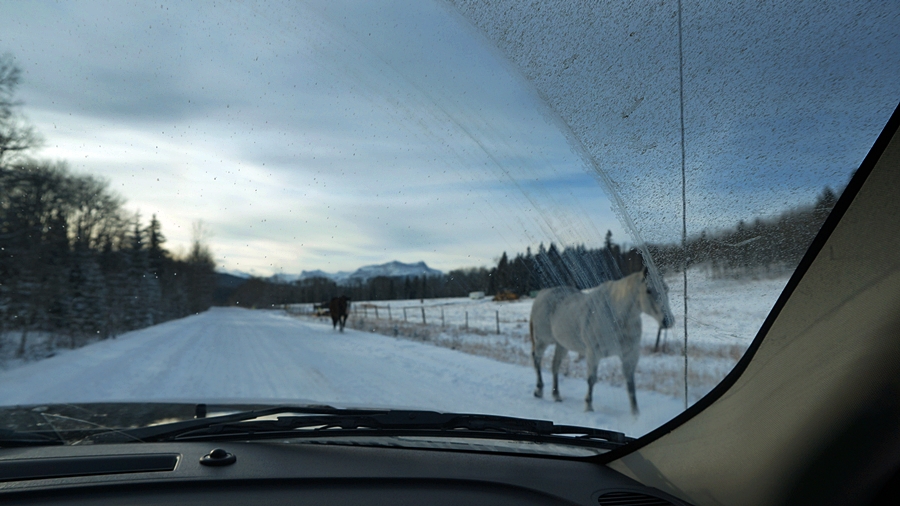 Greg and I decided to drive the afternoon before the climb and check things out and Betty would second as our luxury bivi to allow an early start in the morning. A few days before it had dumped snow and the thermometer told us it was minus 10, Canadian winter had finally arrived.

Parking at the top of the ‘Big Hill’ and going for a walk showed Betty was going no farther. I can’t believe how bold I use to be, the thought of driving the Chelsea tractor, down this hill made me queasy. I don’t mean in case we crashed, I mean the cost to pay someone to recover us from this empty place. I’m sure I thought nothing of it in 2003. 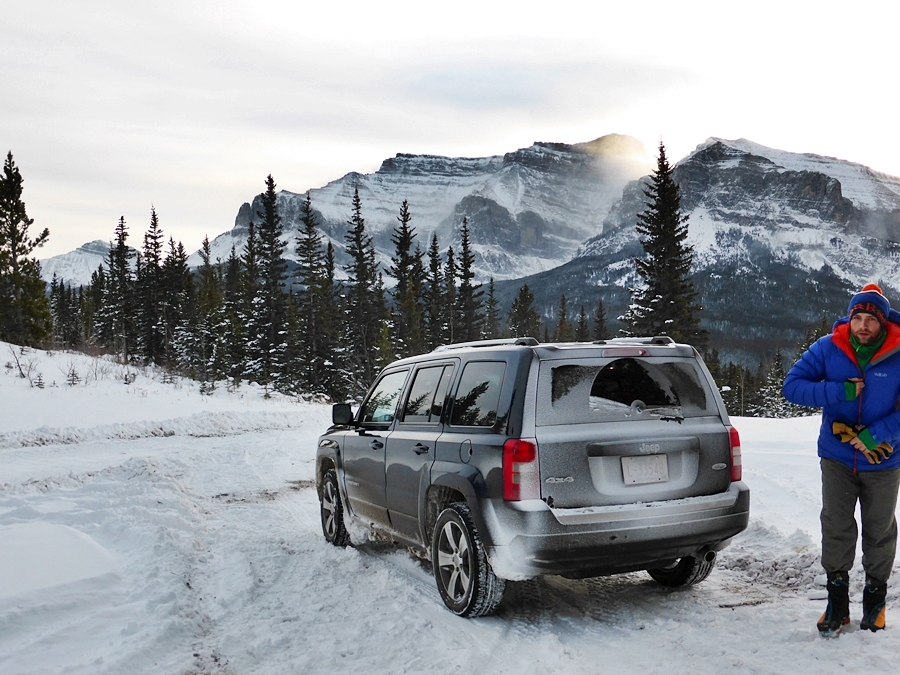 The Real Big Drip, Betty and Boswell all on top of the Big Hill.

Greg and I walked down the Big Hill and turned left following a rough track across the dried river bed until we stood on the raised bank made from small grey rocks washed by the river. The wind scythed the open plain. Snow devils kept us company as we walked the three kilometres, before the turning right into the woods and the track which would eventually led to our intended climb, The Real Big Drip.  We climbed a large bank formed by the cutting motion of the river hundreds of years before and between sheltering eyes from the  bullets of snow, there it was, our climb, still another hour or so away, but there it was cutting a white line directly up the back of a rock cirque.

Looking back to the Big Hill nearly from the right turn toward the climb.

Two weeks earlier there had hardly been any ice in the range, the temperatures were unseasonably warm, but a cold snap had shocked the water and lines were forming almost in front of the eyes. When we attempted to climb The Drip tomorrow, it would be the first ascent this winter, which excited, but also intimidated.

As Greg and I turned, heading off the platform and back to the track leading to the comfort of Betty, I couldn’t stop my mind picturing strings of chandeliered overhanging ice, ice untouched so far this season. The first pitch was also something unknown as a large flake had broken and the reputed grade of M7+ had increased to M9. Tomorrow would tell, but the one thing I was happy about was the drive back out of the Ghost, that would be casual, because Betty was staying exactly where she was… 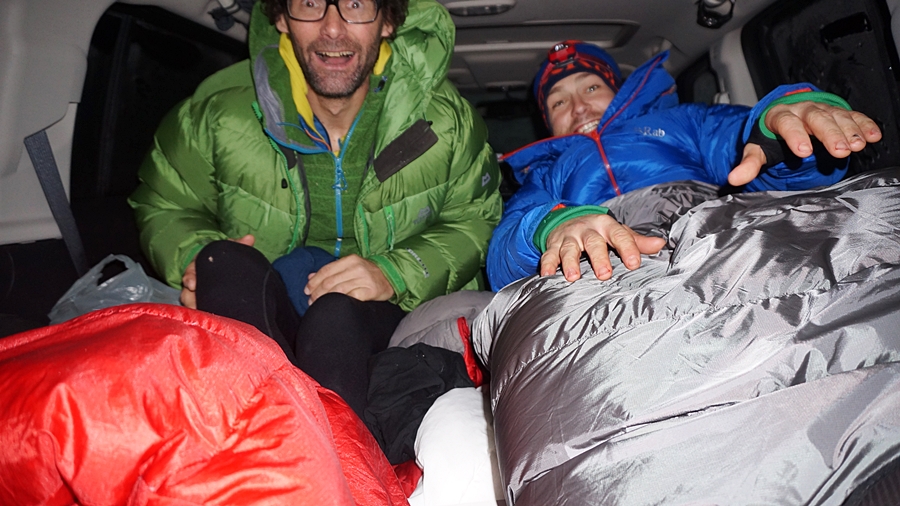 Greg and I successfully climbed the route returning to Betty at approximately ten pm. The wind had gusted to almost gale and the temperature had risen from minus fifteen to plus five. The climb with its tons of hanging daggers had flowed water and at one point the wind gripped a huge dagger from the second roof and ripped it free. I was alongside at the time climbing the fourth pitch and as I teetered, battling the wind and cold and wet, I watched tons of solid water slice the air. When the ice connected, the cirque rattled, but I rattled more.

“Should be back in Canmore by midnight.” I said to Greg, but how wrong I was. Betty decided she didn’t do drifted snow and with the gardening spade loaned from the Alpine Clubhut, the crux of our day was just beginning… 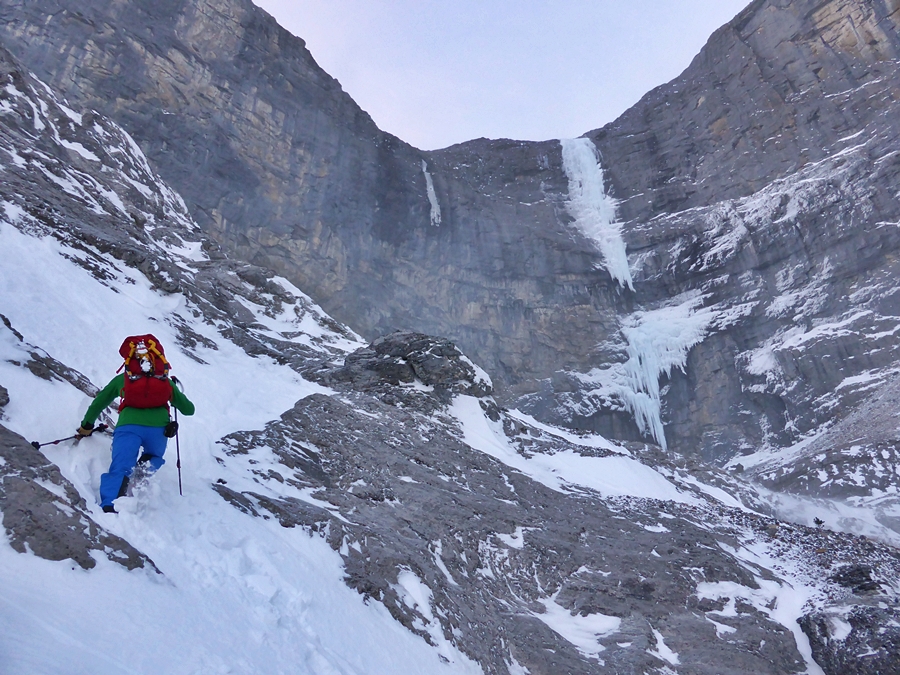 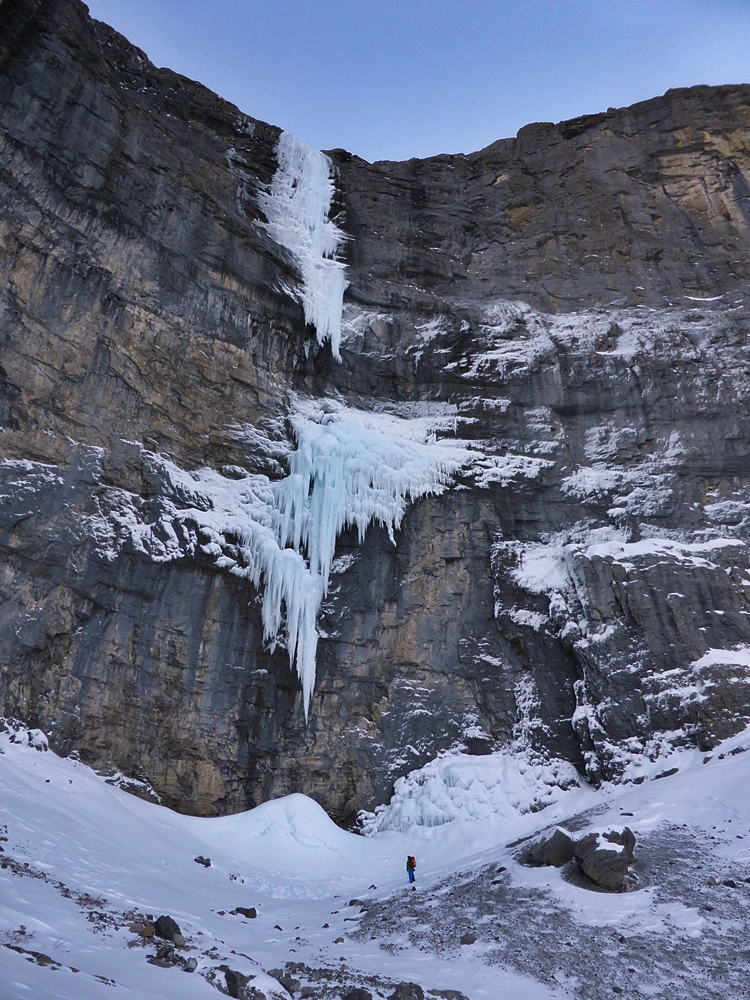 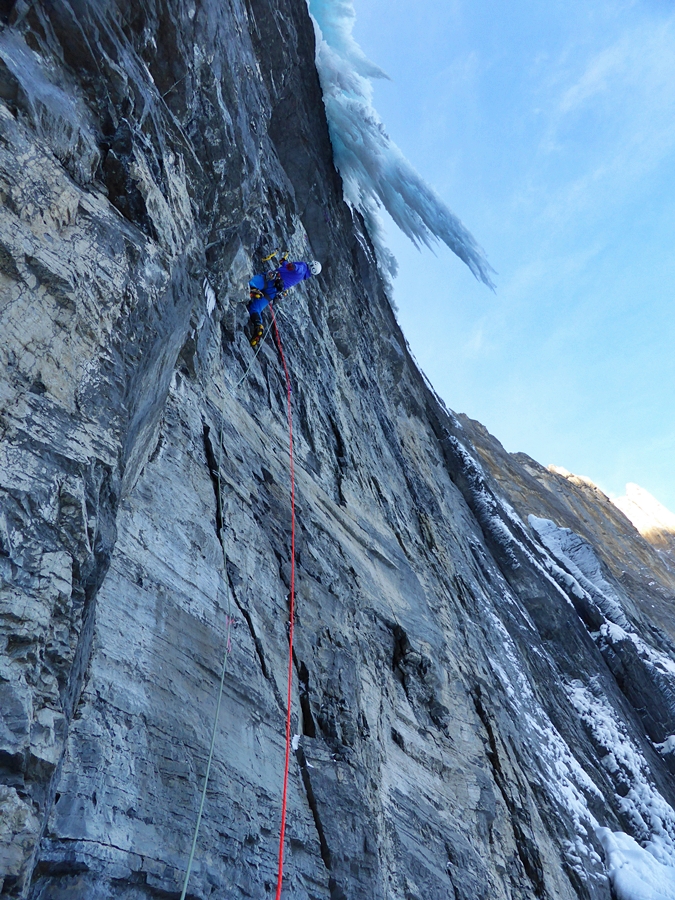 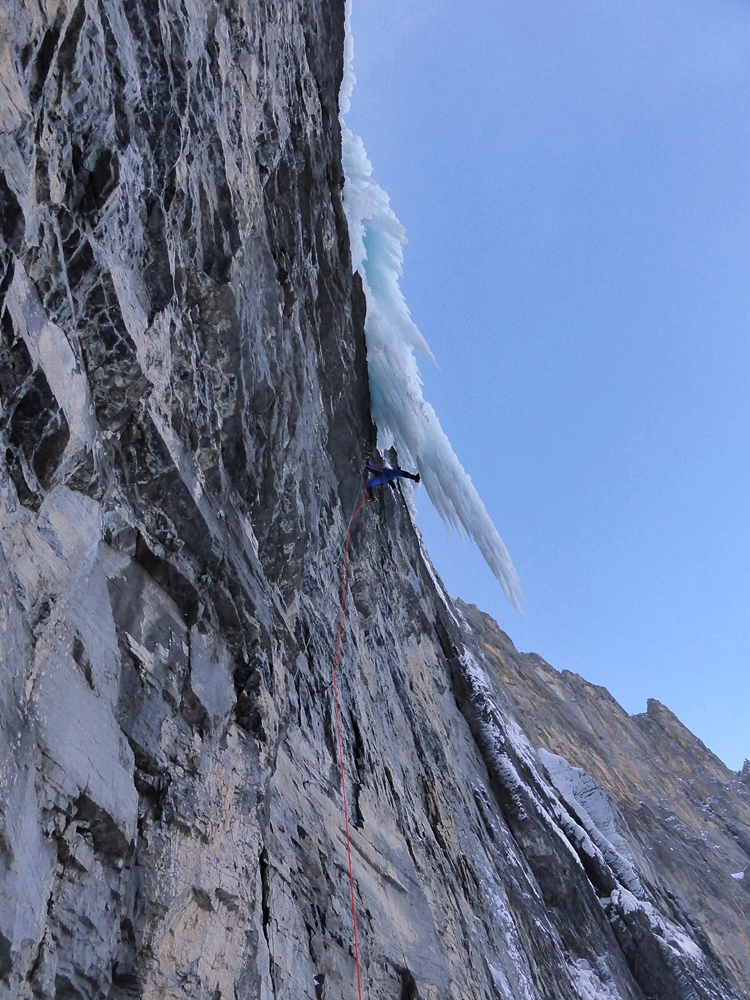 Greg reaching thank god ice. “Shall I bridge onto the ice?” … “I would have about four moves earlier!” 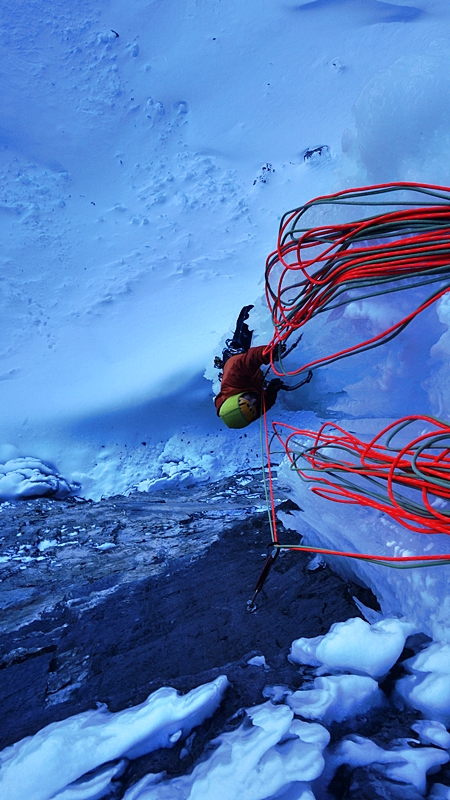 Myself on the ice at the top of pitch one. Credit, Greg Boswell. 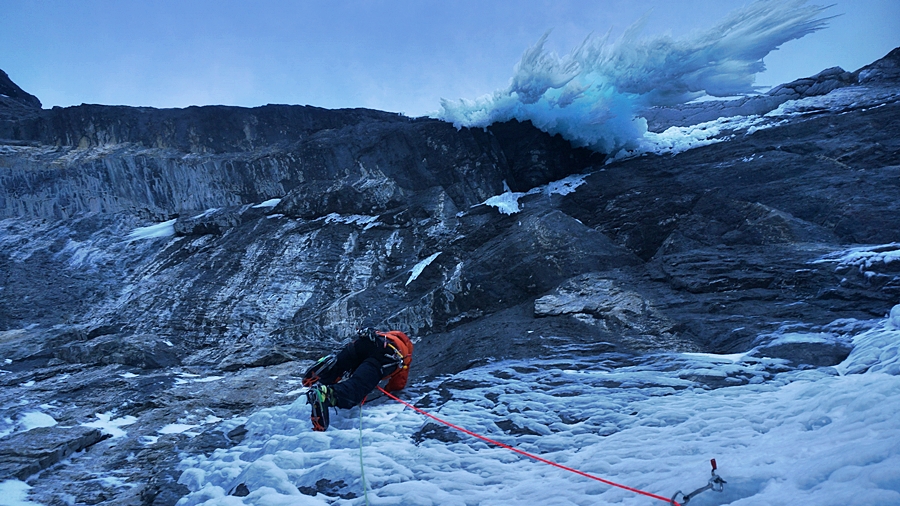 Myself setting off on pitch four. Look at the icicle, the wind is about to alter its looks… Credit, Greg Boswell. 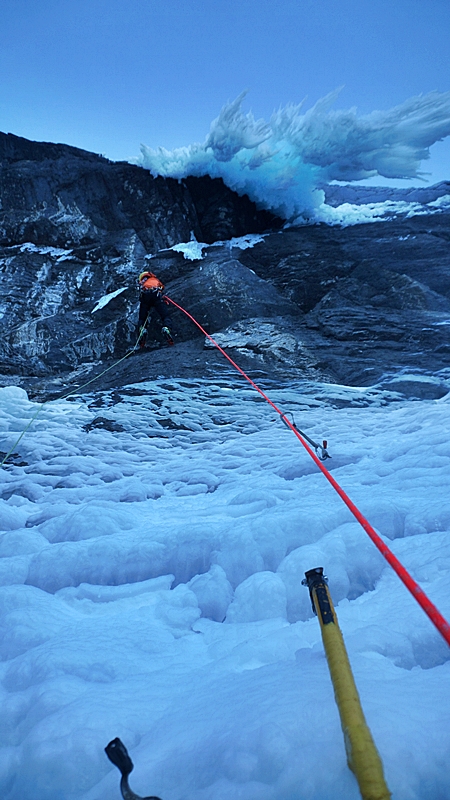 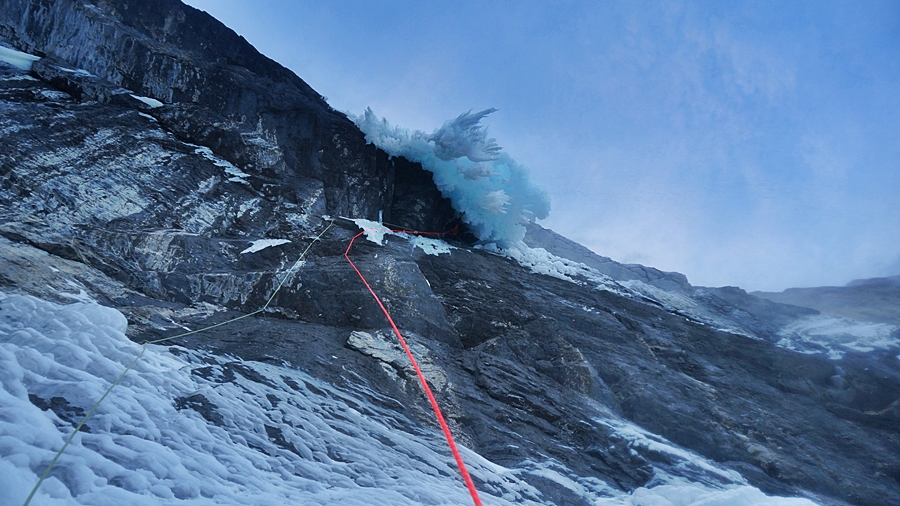 Hiding after the wind had taken hold of the icicle. Credit Greg Boswell. 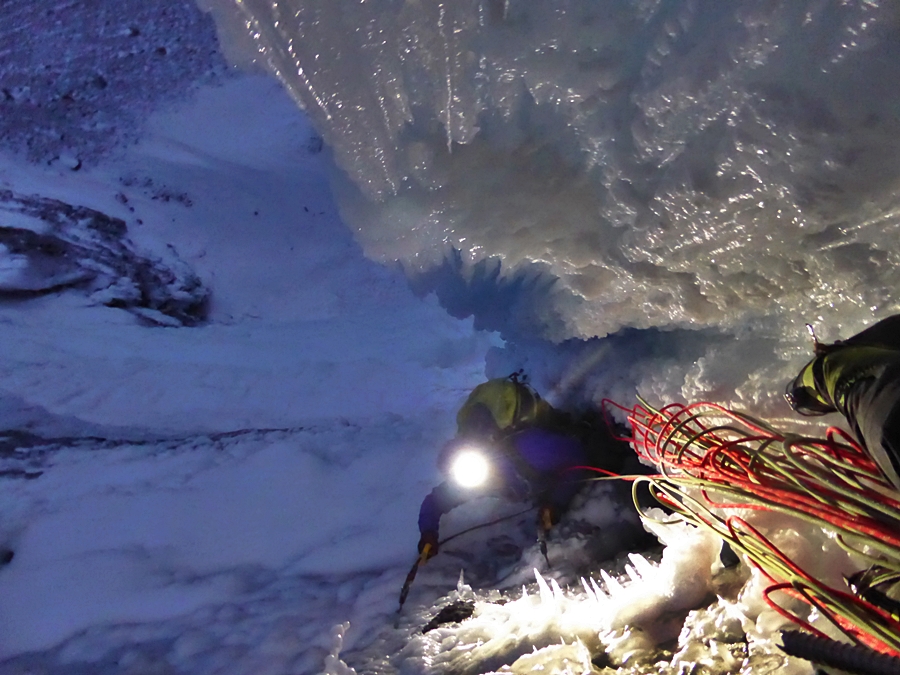 Greg seconding to the belay behind the pitch four icicle.

11 Responses to Betty Battles The Ghost.