Back in the East. 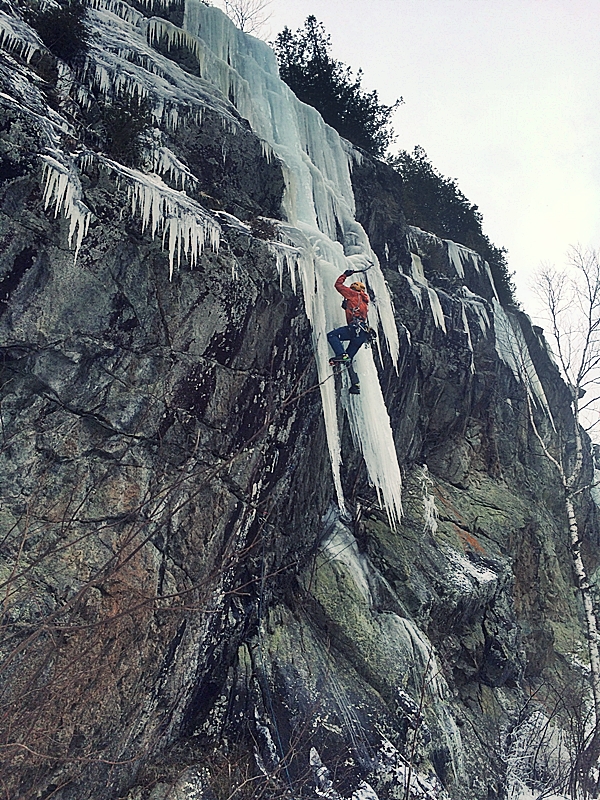 Day one of climbing since my last trip to the East a couple of years ago. This climb is called Cassowary. I was determined for things not to get to crazy to soon. Kevin Mahoney is not the right person to go out with given this criteria, and the next climb, Catatonic Immobility started to up the anti, although the climbing was at least safe.

The day after I arrive in the States, a punch of winter hits the Adirondacks. Dana Seaton and I pull up late afternoon at the Rock and River Lodge – dark wood and warmth set at the end of an unmetalled lane in the middle of the forest. The morning shocks with chill and the snow, so fine, dusts the decking. The petrified hardwoods shiver. The morning is distilled chrome.

Back in the East. Slow flowing rivers with small, heavy with white, ice-islands that on occasion break and take a trip. Shutter board, shingle, Dutch barns filled with steaming black and white cows, post boxes on stalks like waiting schoolchildren at the side of the road. Space and emptiness. A set of red plimsolls, one in front of the other, as if out for a walk by themselves, stand on the snow in the middle of the road. I wonder if their owner had been knocked clean out of them and carried away welded to the grate of some truck. Pipes, tapping the trees for maple sap, bow with frost. The suns milk glows between branches.

Back in the East. Friendly people. People who are friends. Kind people. Piles of hewn logs and a smattering of hewn, well wrapped people. The Stars and Stripes hangs outside the general store flickering in the wind. A black Pitbull chasing a stick bounces through the snow. A jet cuts a ski trail through the sky.

Back in the East. Small crags shine with sheen. Breaking glass. Control the burn and control the brain and control the urge to sprint. Sprinting is not a recommendation. The protection glints a long way below. “You can never have enough pound in kit Nick.” I remember my friend Byard saying just after I almost hit the deck. “We’ll start steady, Matt McCormick said and almost as quick as you can say epic, I was teetering high, attached to thin silver looking at the distance I would go and my head screamed, ‘How the hell did this happen all over again and so soon?’

A big thank you to everyone for their kindness and who made me very welcome at the Rock and River and to everyone involved with the organisation and running of the Adirondack International Mountaineering Festival. 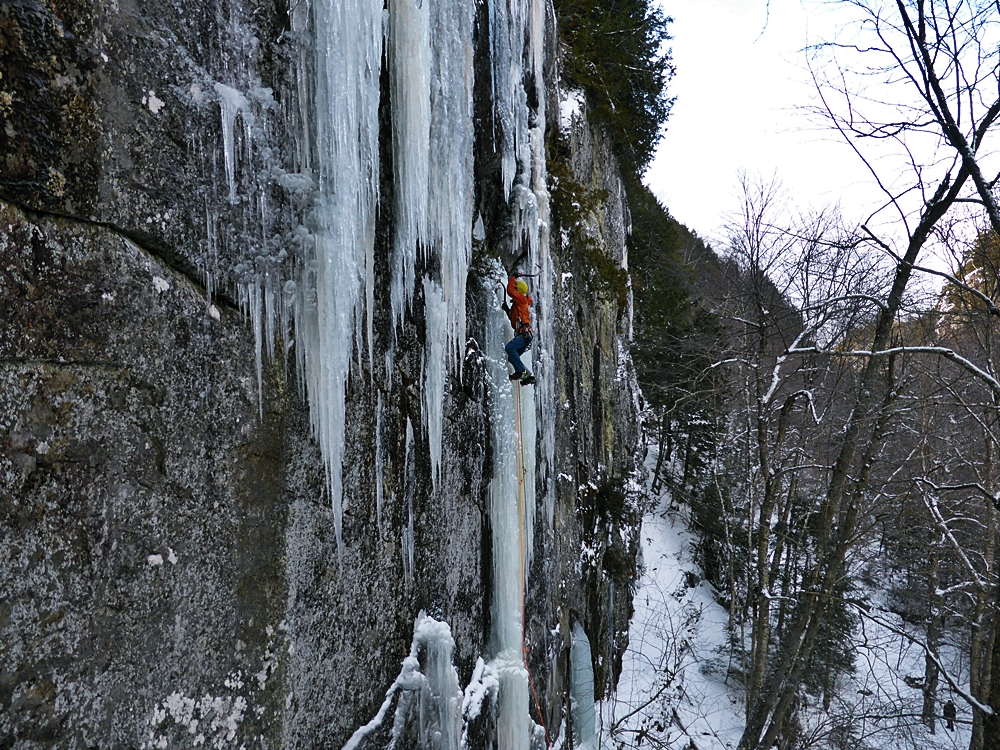 The second day of climbing with Matt McCormick, Alexa Siegel and Matt Horner went somewhat adrift and was getting close to what I left behind on my last visit to the East… There is still so long to go on this trip as well! This climb was put up by the great, Alex Lowe and Scott Backes and is called Ice Storm. 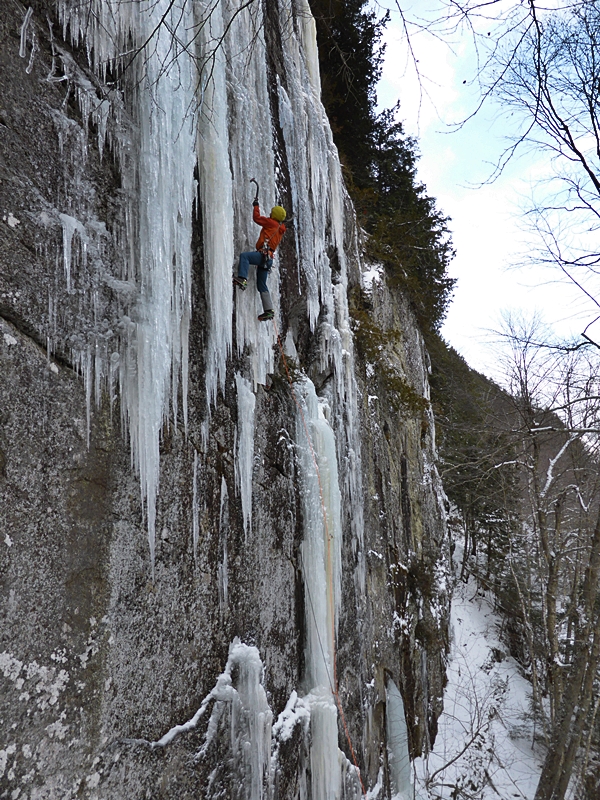 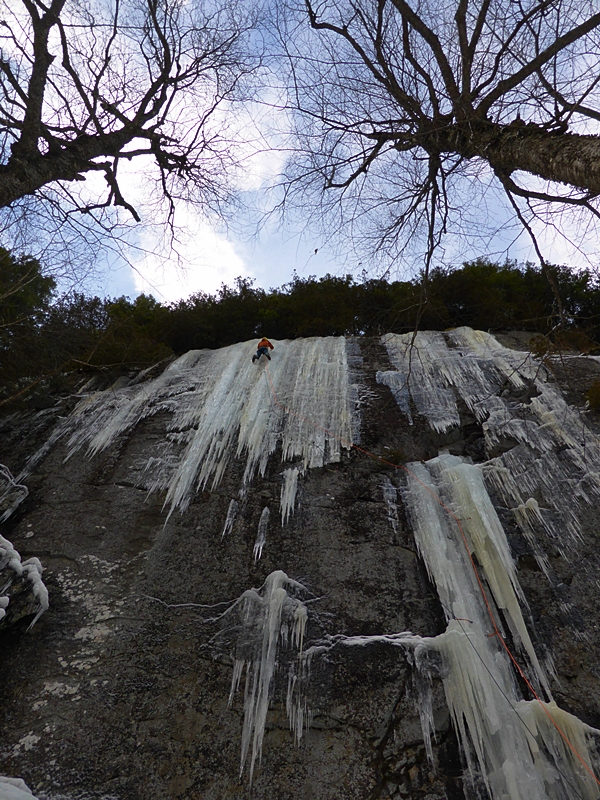 Topping out on Ice Storm. 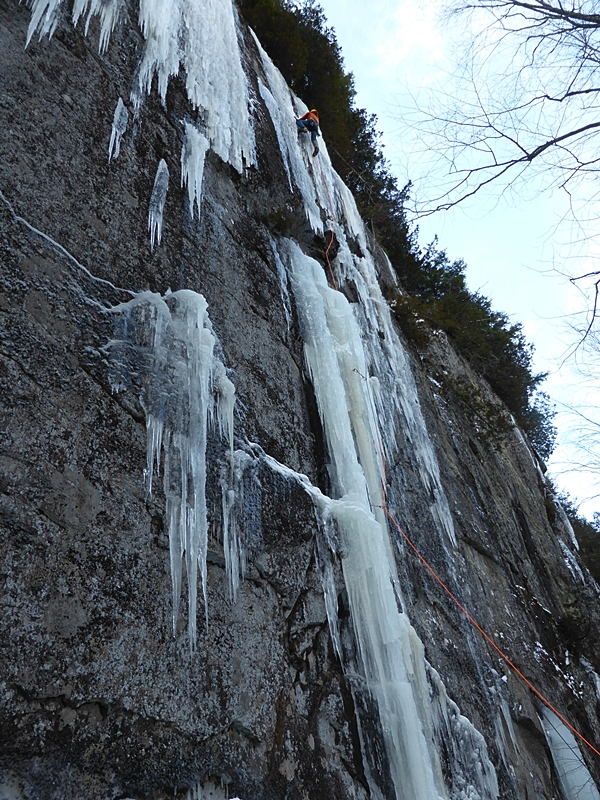 Things beginning to get a bit silly way too soon on a pretty bold climb called Bubba. WI 5+ first climbed by Ed Palen and Paul Brown. 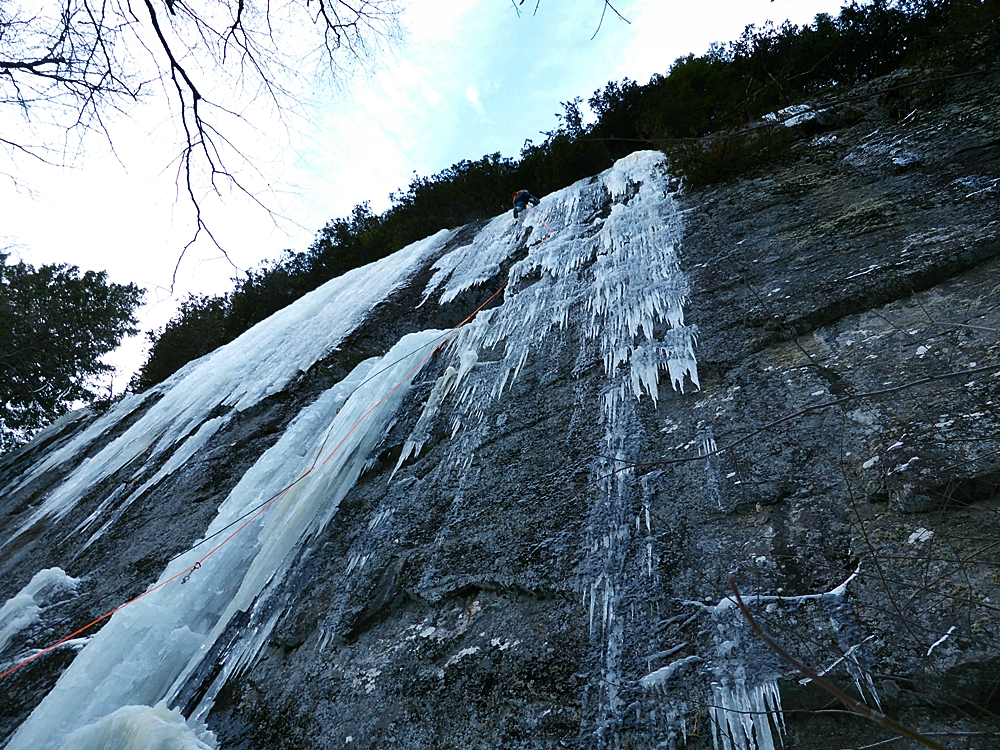 Thankfully topping out on Bubba…