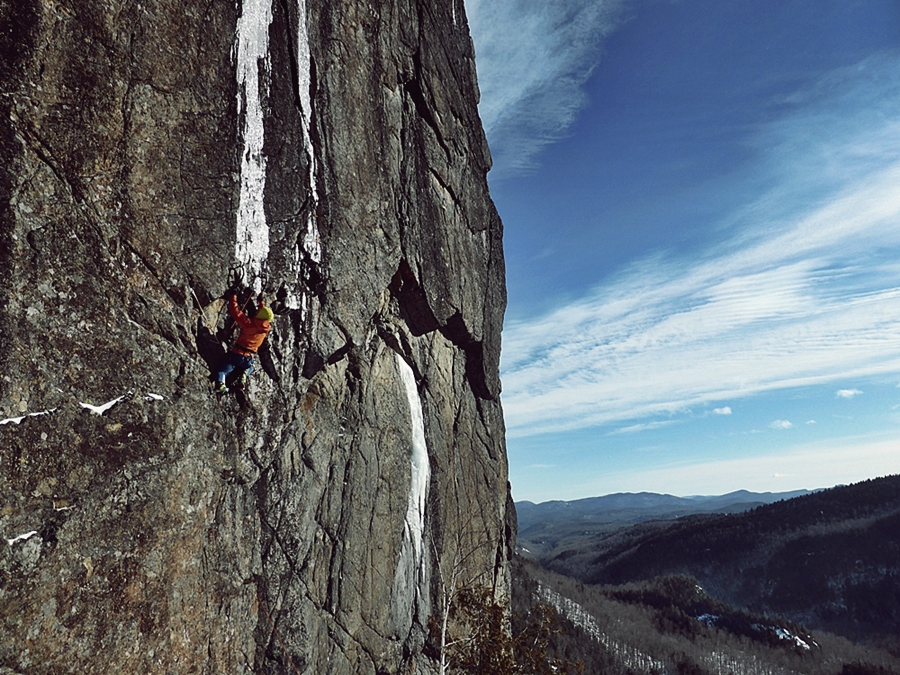 Myself on Flight into Emerald City before the sun made its presence felt! Pic credit, Matt McCormick.

Matt, Doug and I, huddled deep inside our down jackets while walking the snow-devilled pavement of Burlington in the state of Vermont. It was nine-thirty in the evening and I would have expected the city to be quiet, but the pavements and the bars and the restaurants were heaving. Matt McCormick and I wore climbing clothes, sporty little soft shell numbers, having driven south from the Adirondacks before meeting Doug Madara in the climbing wall, where we started to set two dry tooling routes in preparation for a competition in two days’ time. Skeletal trees, growing around a chained off grass square and what looked like a public building, had illuminated electricity bulbs high in the branches – green, red, blue, yellow, orange – the multi colours reflected through the frigid and smeared the red brick and mortar.

The three of us entered El Gato Cantina, a Mexican restaurant and immediately I felt a little uncomfortable. I have lived in Llanberis in North Wales for thirteen years, Llanberis is a small town and quiet for much of the time in comparison to many places in the UK. People move to Beris for the climbing and the climbing vibe, but it is relatively insulated and separated and the ratio of men to women in the climbing population is as wide as a hippopotamus’s arse – wide enough in fact to make entering the real world, a world that has other objectives apart from climbing, running, cycling and surfing, something almost mystifying and downright intimidating, well at least for an old full time climber who is wearing sweat-stinking climbing clothes while faced with a Mexican Restaurant full of young women dressed to the nines and out to party.

I turned to Doug, who was ten years older than me, but looking more comfortable with the situation and said, “Shit, is this normal, I don’t think I’ve ever seen so many women in the same place since reading about the suffragette movement. Doug spoke without turning to look at me, “No.” And then I remembered what had happened earlier in the day and felt more comfortable in my old skin because I imagined the whole buzzing vibe of this female fuelled Mexican restaurant, all of the clinking of glasses, the happy chatter, the laughing and joking and whooping and partying, suddenly stopping and in that same instant, where a knife-blade could be heard hitting the floor, I watch the whole restaurant, every beautiful woman turn to face us and in unison they all lift their heavily bangled arms and point at Matt – good looking Matt, young Matt, and the most confident in this partying vibe of twenty something year olds, and in unison, i imagined the beautiful throng saying in monotone, “It was him, it was him, he is the one that let himself down – he jibbed, he scuttled away, he cried out the word that no climber should ever cry, ‘TAKE,’ he let himself down, he let Naomi his girlfriend down, he let his family down, he failed.” And in that moment all of my insecurities paled, life was once again good.

Earlier in the day, Kevin Mahoney, Matt and I returned to the Adirondacks. Rolling hills with snow and spruce. And between the hills, cliffs of steep compact rock wearing glistening baking foil. Two days previous, when we climbed at Chapel Pond Canyon, Matt watched a line form high on the Upper Washbowl and throughout the day gave running commentary, “Its getting fatter, wider, longer, it’s almost touching down…” The excitement oozing from Matt was easy to pick up and it became infecting.

The line that held Matt’s interest was a streak running down the line of a rock climb called Flight into Emerald City and this was what the three of us were going to have a close look.

Matt climbed a fifty metre mixed pitch that lead the three of us to a belay from a tree beneath a slightly overhanging wall of cracks and ice streaks. The whole of the glistening Adirondacks filled our blinking eyes. The sun shone, but the temperature, which was about minus fifteen, stopped the ice dribbling away and as quick as you can say, ‘Kevin Mahoney is a MOG who is never going to get beaten to having the first attempt’, Kevin was away and above us and swinging around and pulling moves that a man of so much girth should not be doing. Matt and I stood below looking and waiting for the clatter of a MOG being spat from less ice than is generally in a tumbler, but no, it didn’t happen, and after a time the call came to lower him back to the ledge and down alongside Kevin came the first winter ascent in his outsized pocket.

It was then I realised the sun had moved and was now shining fully onto the face, but it was still cold and reasonably early, but how long this would remain was anyone’s guess. I looked up, up onto a beautiful wall glittering cold and dangling pieces of well-placed MOG protection and in an instant I knew it would be best to get on this truly amazing looking climb, sooner, rather than later, and as I lowered Kevin, it made sense to go for the lead on his gear to speed things up. I looked at Matt and asked him if he wanted to go, while simmering beneath my easy going, jovial, was a ticking clock of cunning knowing Matt is one of the nicest and kindest guys out there and my cunning plan worked, “Oh, you know Nick,” Matt said in his deep East Coast drawl, “You should go, you’re the guest.” And in a flash I said, “OK.” Without giving Matt any time for reconsidering. 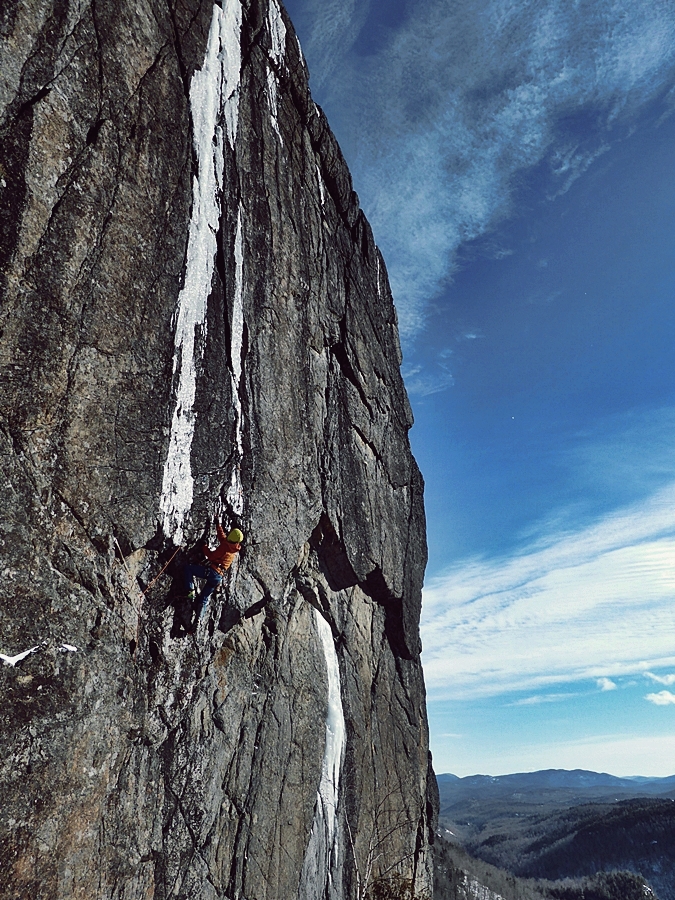 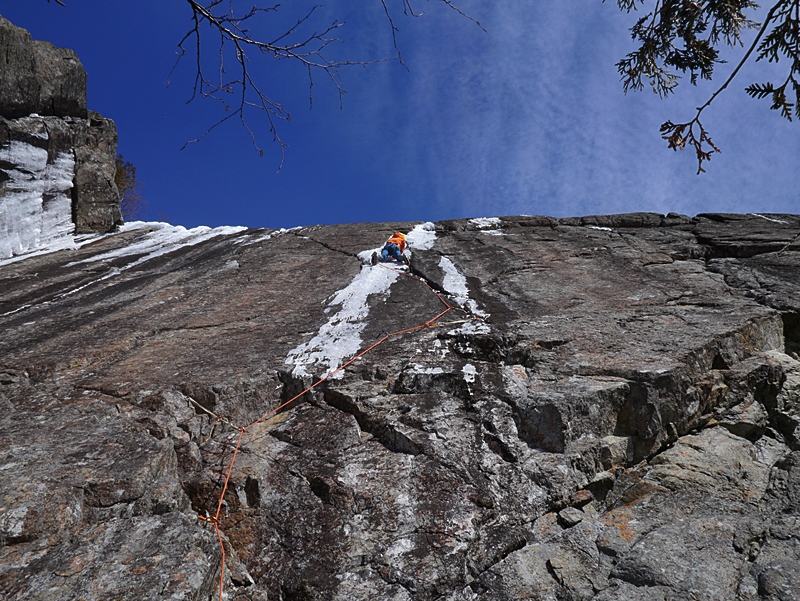 Myself higher on the second ascent of Flight into Emerald City. Pic credit, Matt McCormick

What a situation, the air, the space, the cold, although the cold was not quite as cold anymore… I grabbed the second winter ascent after a few heart in mouth moments while tapping away at a weakening, puckering thin skin, which appeared to be starting to slowly delaminate.

We pulled the rope for a second time and Matt set off. The overhanging lower section didn’t rely on ice too much and Matt made short work of the powerful crux although the tap pouring water from the sheet above him – the sheet he was soon going to have to teeter and trust, the sheet with stubby ice screw protection up high, the hollow creaking cracking sheet – had opened full and was rinsing Matt in the face. “Oh, this is not good, this is really not good, its falling off, peeling, I don’t know what to do.”

The MOG and I content with our respective ascents didn’t really care, but we gave encouragement, “Get on with it Matt, its fine.”

Matt had climbed the iced crack but now he had to cross the sheet to a crack on the left and with each tap and each kick, the ice creaked and lumps pealed, twisting and smashing onto the rock ledge.

Somehow, Matt scuttered across what was ice but what now resembled a flowing stream and plugged the crack full of cams.

“All of the ice is breaking away, the whole lot, I really don’t like this.”

“No, I really don’t think it is, all of the ice is bulging and balancing… Take, TAKE.”

But as I lowered him and he landed back on the ledge shaking his head with his weakness, the sheet making up the bottom half of the climb detached and crashed to the ledge obliterating to a million pieces and fortunately missing the three of us.

“Hmm, guess the ice had gotten a little warm!” 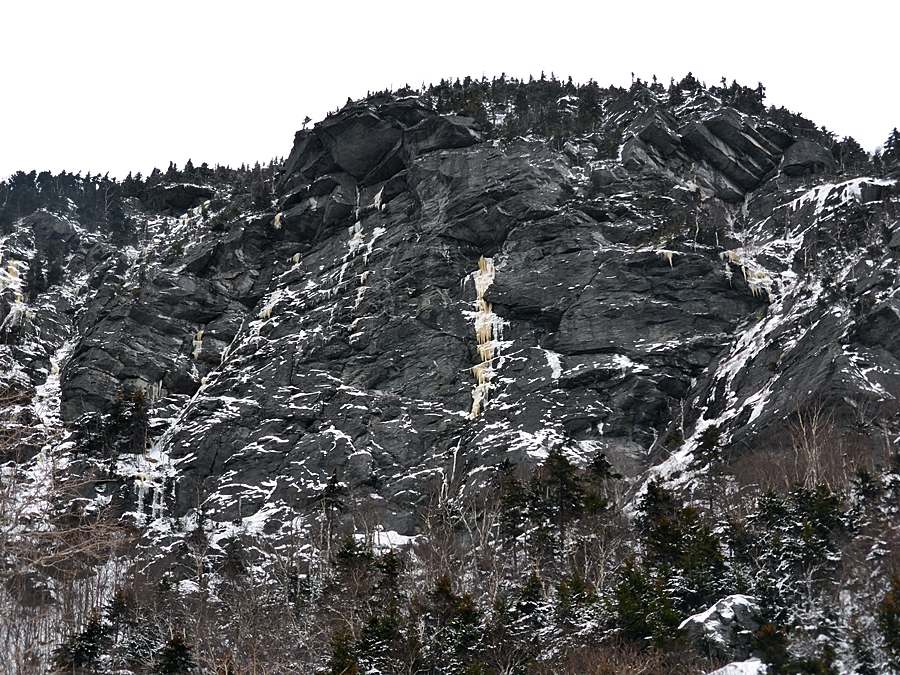 The Quartz Crack Face and the Snotsickle which Kevin Mahoney and I climbed hoping to make the second ascent of Post Nasel Drip, a mixed line first put up by Matt McCormick and Peter Ducette that follows the roof to the left at the top of the ice, across the face and up an overhanging crack on the left. Unfortunately Kevin, being a professional, decided getting back to work on time had to take precidence. 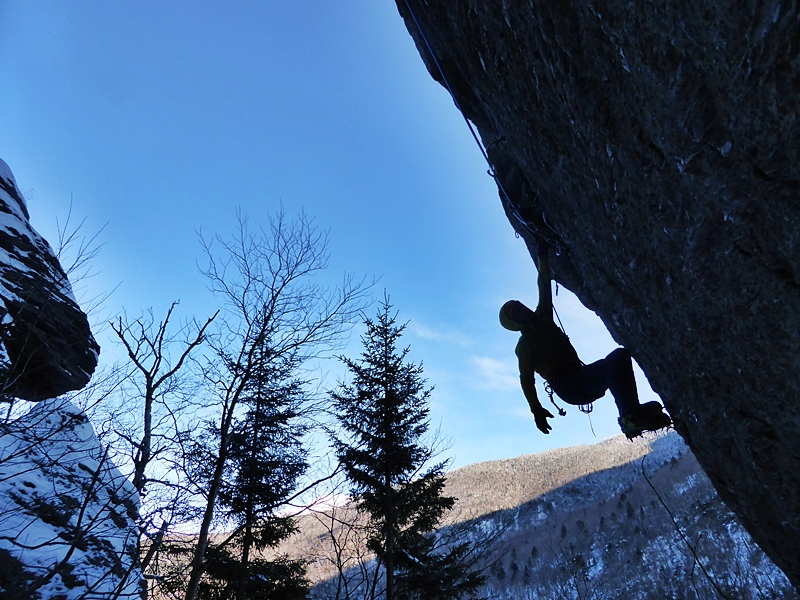 Myself leading End of the Begining. Both Kevin and I led this one, which is a pumpy number on gear and bolts leading to a fine thing smear of ice. Pic credit, Kevin Mahoney. 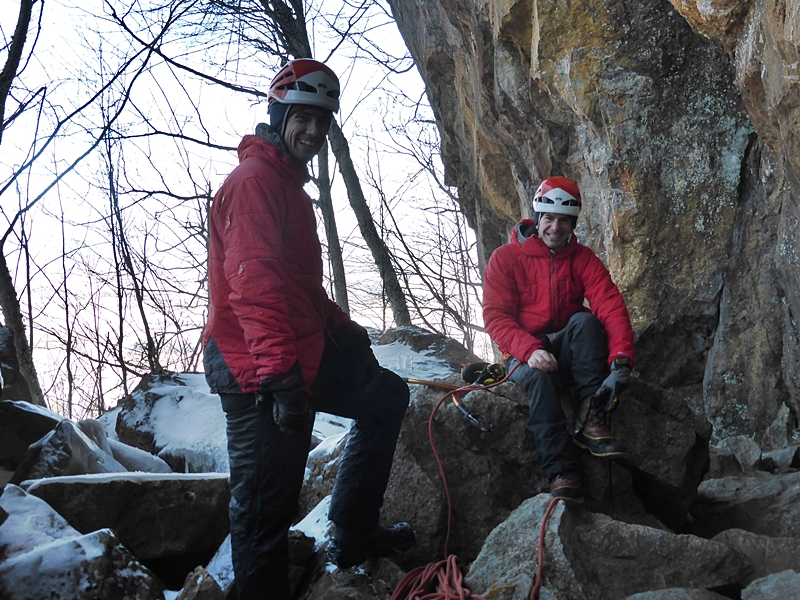 Another day and another great Vermont crag. Snake Mountain. Matt and Michael do partner look! 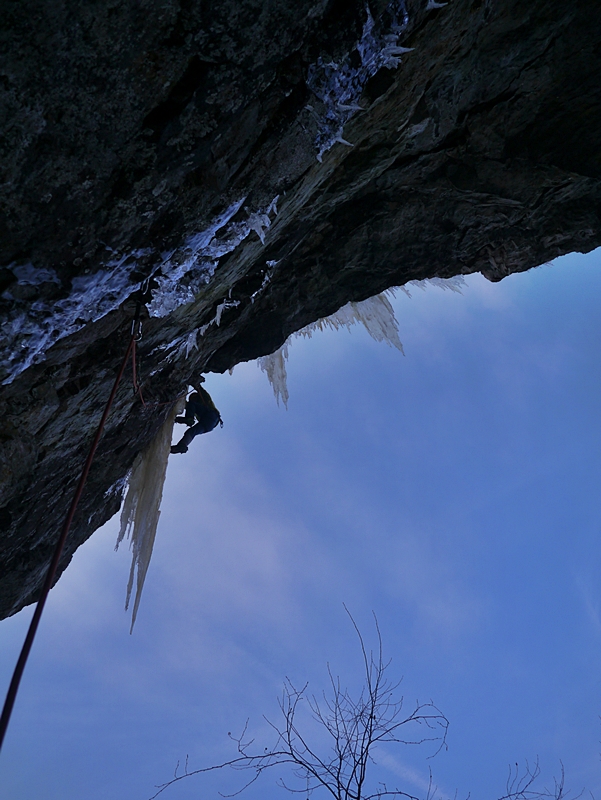 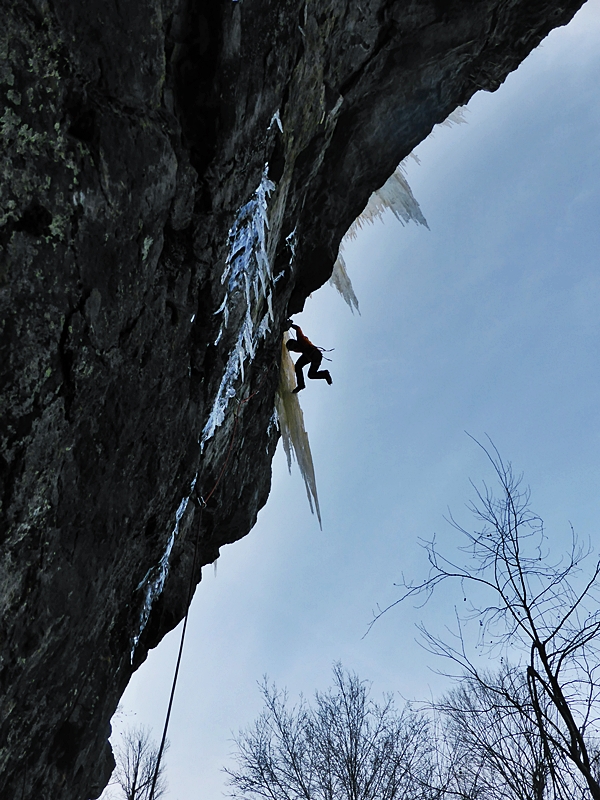 Matt McCormick on the SNRF. 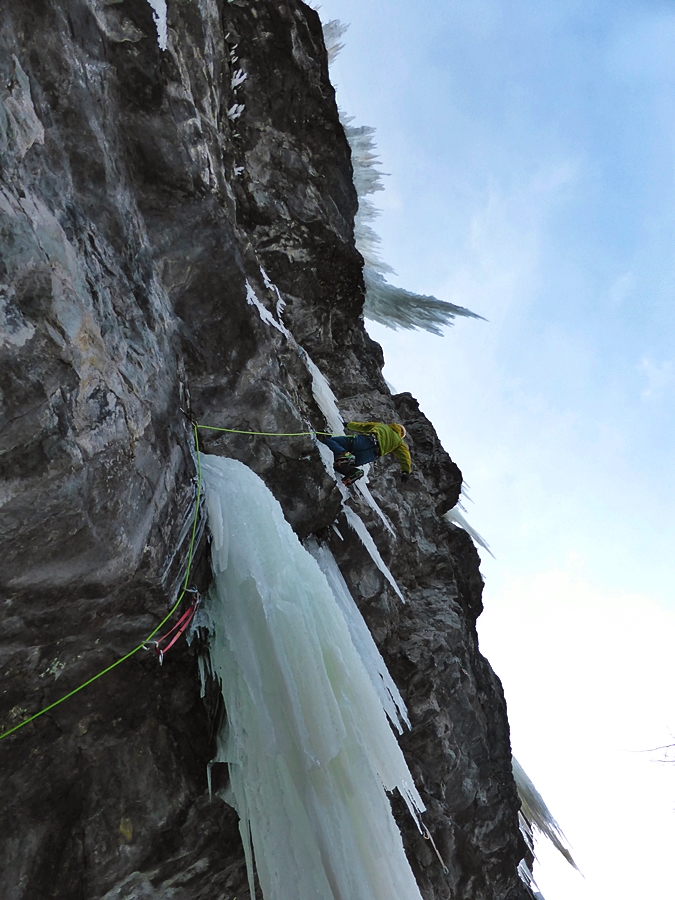 Myself on an absolute shoulder blaster called Fang Shui. Matt tried it afterwards but got a little rough with the icicle which scudded into the earth making the climb a whole lot more pumpier proposition. After this climb Matt and I decided tomorrow would be a rest day! Pic credit, Matt McCormick.

One Response to Flight into El Gato.