Rock and Roll and Rock and Snow. 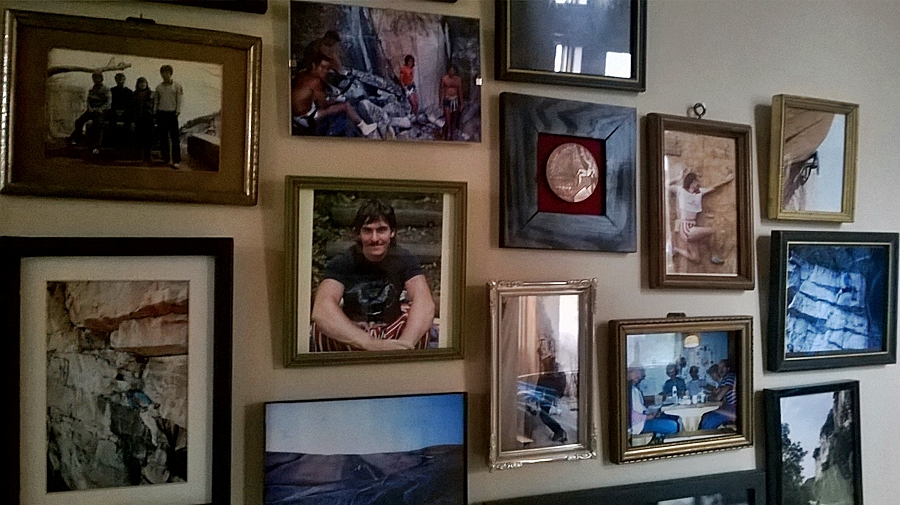 A few pics on entering Russ and Amy’s place will give you a clue to the Clune.

I’m sat on my own inside a large detached house owned by Amy Pickering and Russ Clune. Looking through the large window, deer walk through marsh grass, silver birch glitter with Goldfinch and as a backdrop, the Gunks shine in the early morning sun. The house is near the small and quirky town of New Paltz in New York State. On the first drive through New Paltz, two days ago, looking out through the side window, I immediately liked what I saw and felt, because what I saw and felt reminded me of similar quirky towns near the sea on the Cornish Coast of Britain.

Small individually owned cafes and bars rubbed gable ends with red brick and shutterboard art shops, a Turkish restaurant, record shops, a sushi joint, tattoo parlours, a hostel with a large plastic sasquatch, and the place we were visiting, where tomorrow I would give a presentation, Rock and Snow, an independently owned climbing shop, the type that are becoming rare in our world of sterile internet consumer convenience. Rock and Snow is a cave stuffed to the slippery walls and full of history and gear and knowledge and intimacy, a place of love and dedication, the kind of place when I first found climbing I would enter and feel like I’d found Nirvana.

Talking about Nirvana, the first time I met Amy and Russ was about two weeks before at the Keene Valley Ice festival where on being introduced to Russ, someone I was told had something to do with Black Diamond, I possibly upset him, because as we shook hands, Russ asked, “What’s your story?” And being a Brit, who would rather listen to someone else tell their story, I answered rather curt and somewhat bolshie “I don’t have a story, what’s your story?”

Later in the evening, sat at the dinner table next to Amy and Barry Blanchard with Russ and Matt McCormick sat opposite, Amy turned to Barry and me and said, “What’s the best punk rock single ever. I felt somewhat enlightened with this turn of conversation and listened as Barry said it had to be something by the Clash. I answered it had to be a Sex Pistols song. Amy thought for a while before saying she may begrudgingly admit to agreeing with my choice, but her decision was swayed by having met John Lydon and not having a good experience. As you may imagine, this took me back a little. Being a Brit and slightly cynical and loving most of what John Lydon stands for, I immediately thought, ‘is this woman bullshitting,’ but as the conversation progressed, it became obvious not only had Amy met John Lydon, she was good friends with a whole host of other well-known and very successful musicians. Russ passed me his phone and it showed a picture of Amy sat with Dave Grohl and it wasn’t the type of “can I have my picture taken with you please,” picture, Dave Grohl was laughing and sat with his arm around Amy looking like a close friend. Holy shit, this woman was the real deal. Barry also looked at the picture and asked “Who is that,” which gave me a little bit of warmth that someone as cool as Barry didn’t recognise someone as cool as Dave Grohl, but maybe this just makes me really uncool the fact that I thought it cool.

It turns out Russ Clune is the real deal and also has a story, but I’ll let you look that one up for yourselves. Needless to say, given my present location my ice trip is on hold for a day before I hitch a ride with Doug Madara to North Conway for the final presentation at the Mount Washington Icefest and tomorrow I’m going rock climbing with Russ at the Gunks.

Got to say, thanks to everyone here in New Paltz for showing me friendship and kindness, especially everyone at Rock and Snow, yes, that even includes you Rich with your terrible jokes and of course Russ and Amy for leaving me home alone in their home without a single cat to look after. 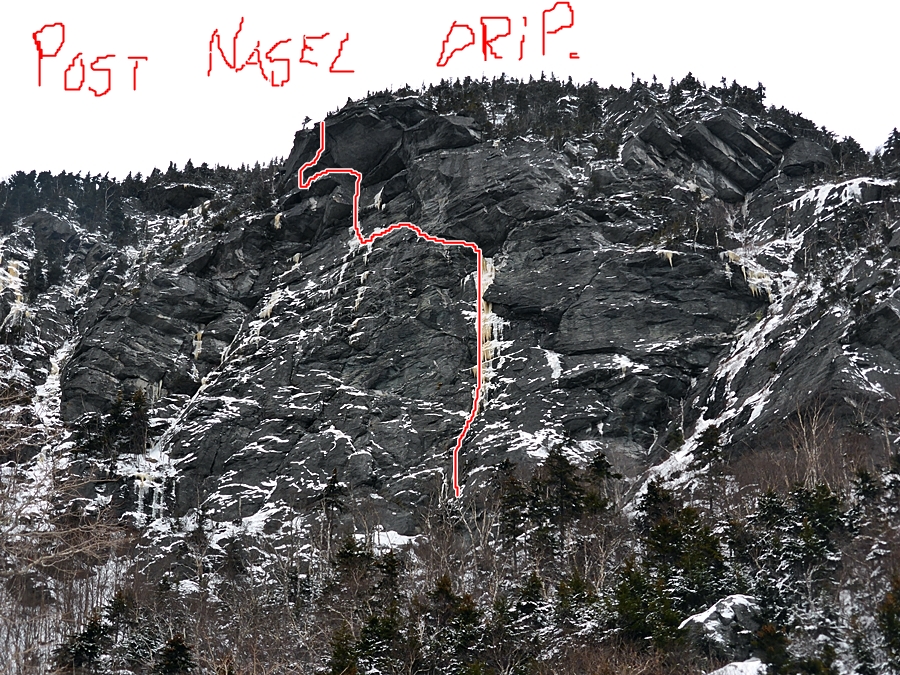 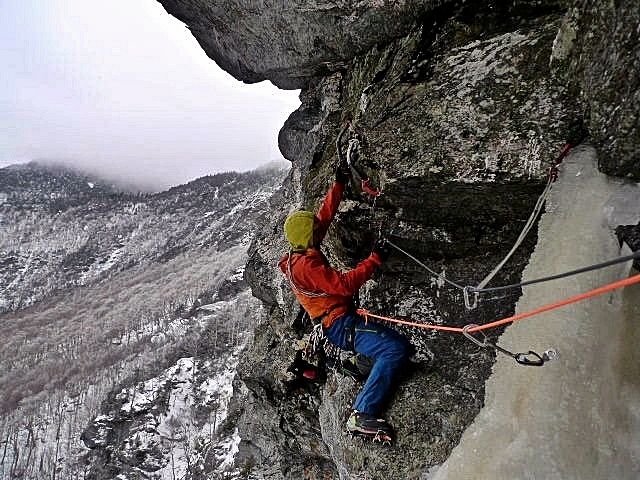 Setting off on pitch 2, leaving behind The Snotsickle and most of the ice. Pic credit, Kevin Mahoney. 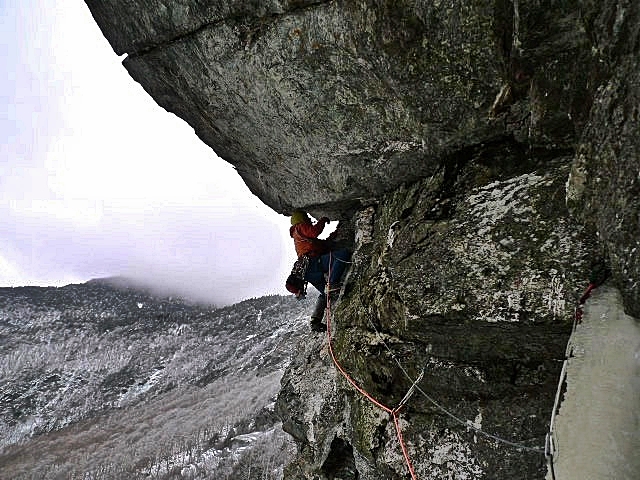 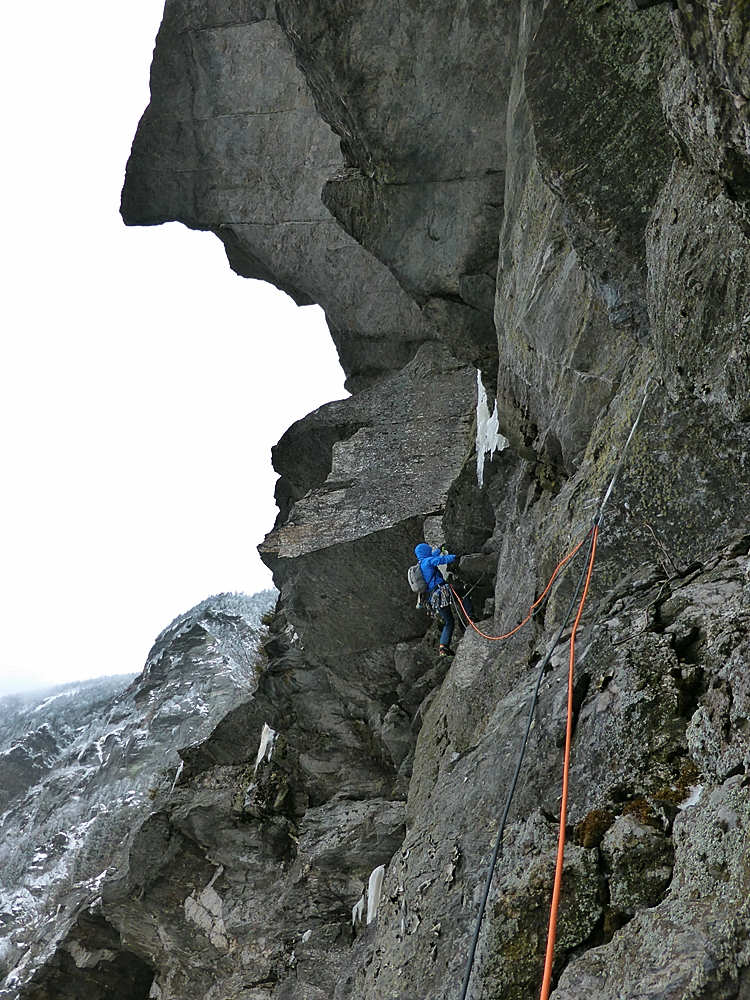 Kevin leading pitch 3 of Post Nasel Drip. The pull into the corner was tricky and the exposure a little airy. 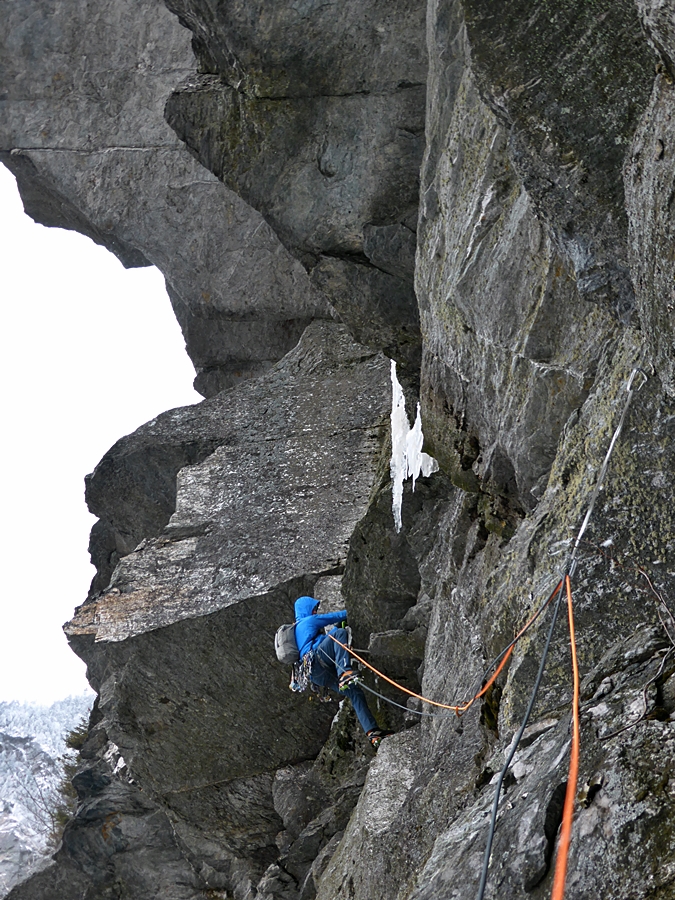 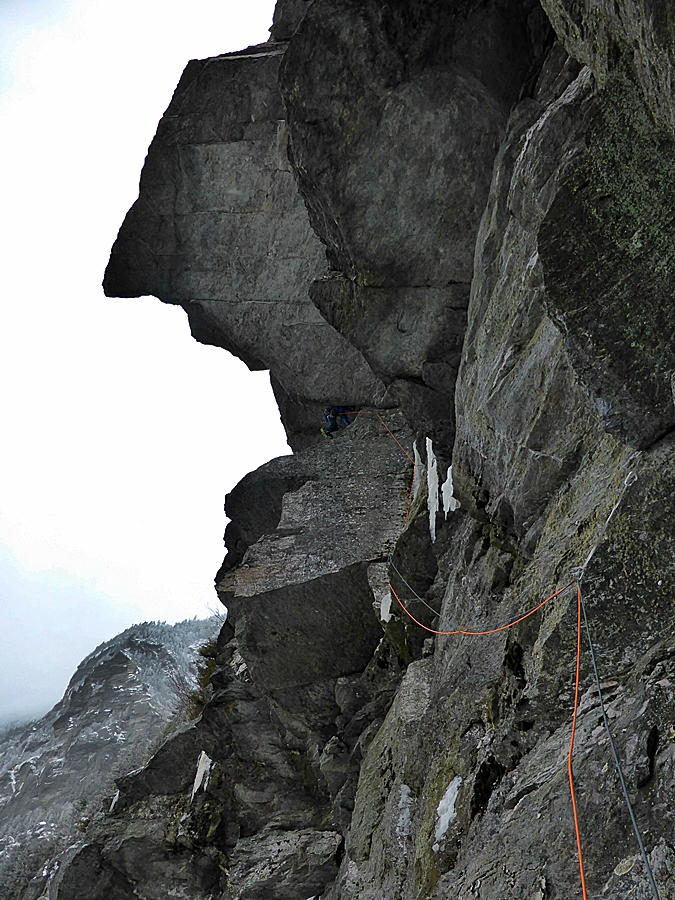 Nearly at the belay with even more exposure. 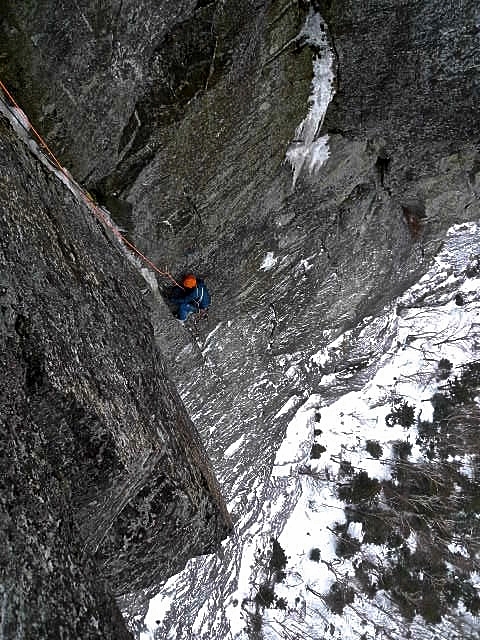 Looking down at me seconding pitch 3. Credit, Kevin Mahoney. 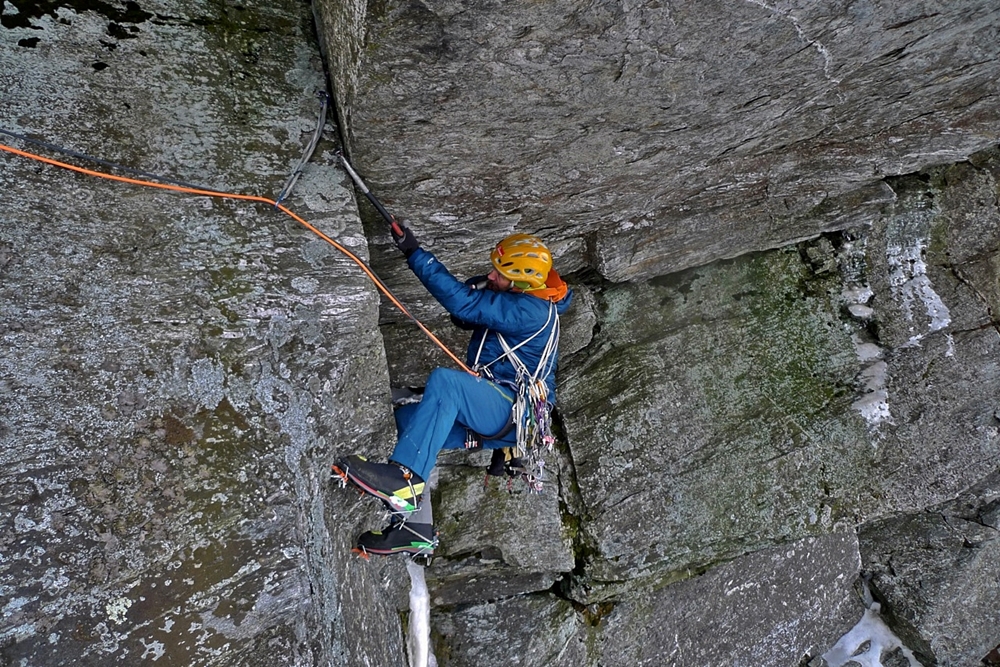 Nearly at the belay on pitch 3. OK, so its the States, no need to say its looking black! Credit, Kevin Mahoney. 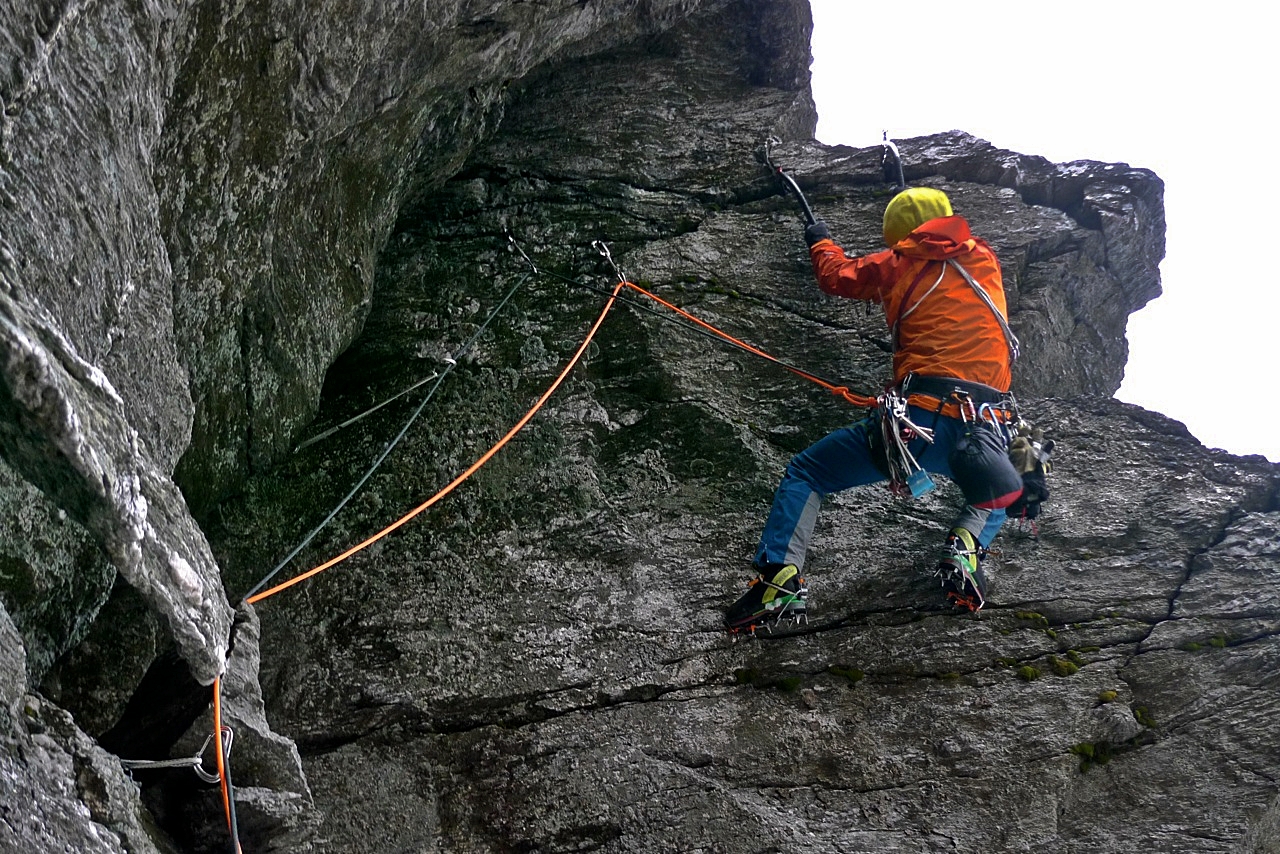 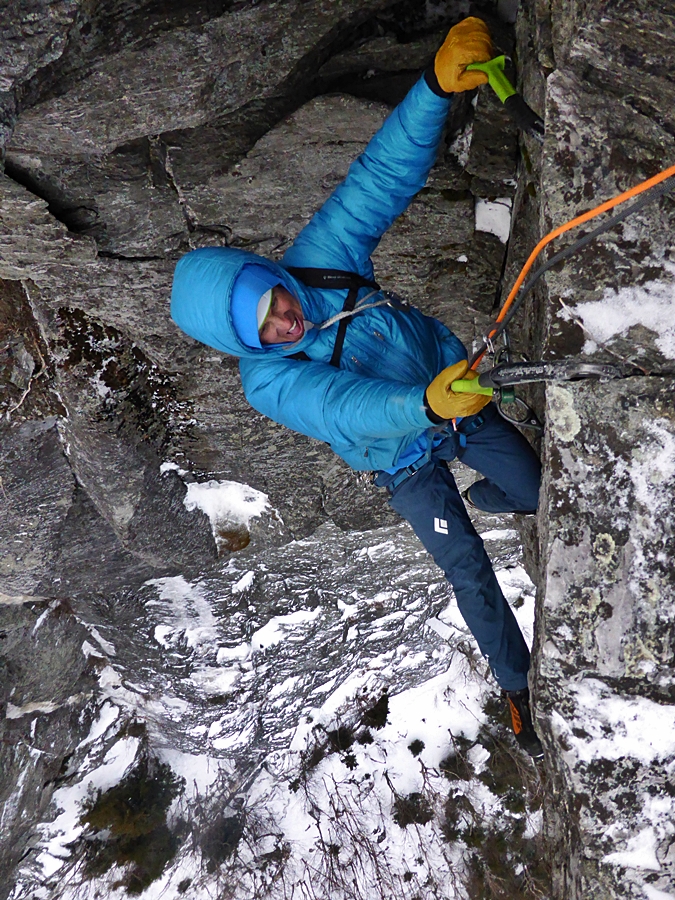 The following day after climbing Post Nasel Drip, Matt McCormick and I climbed at Willoughby. I love this place that is situated in the north of Vermont. While climbing, the frozen lake below creaks and stretches and makes mournful whale like noises adding to the atmosphre. 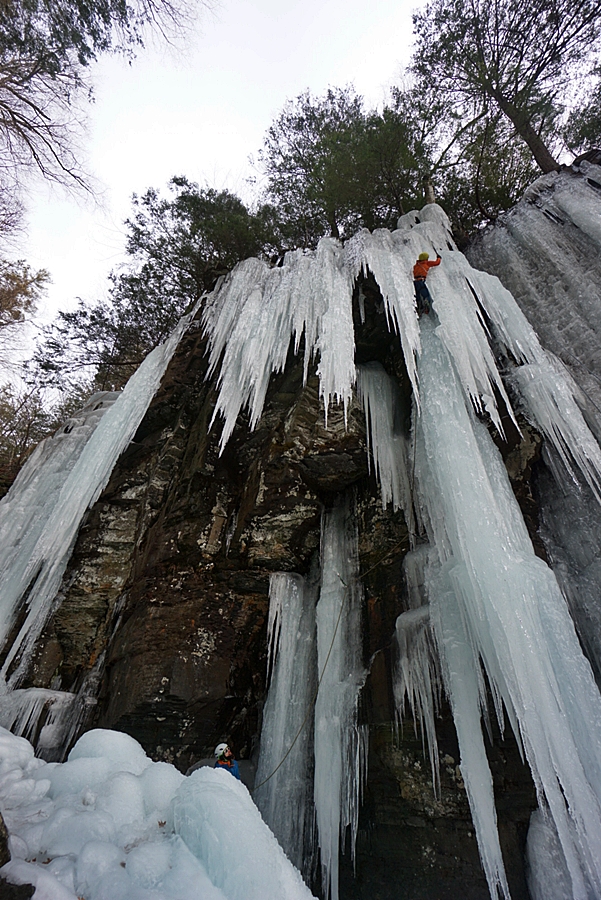 Climbing in the Devils Kitchen. Not the one in North Wales before you all jump in your cars, this is at The Catskills, New York State. Credit Marty Molitoris. 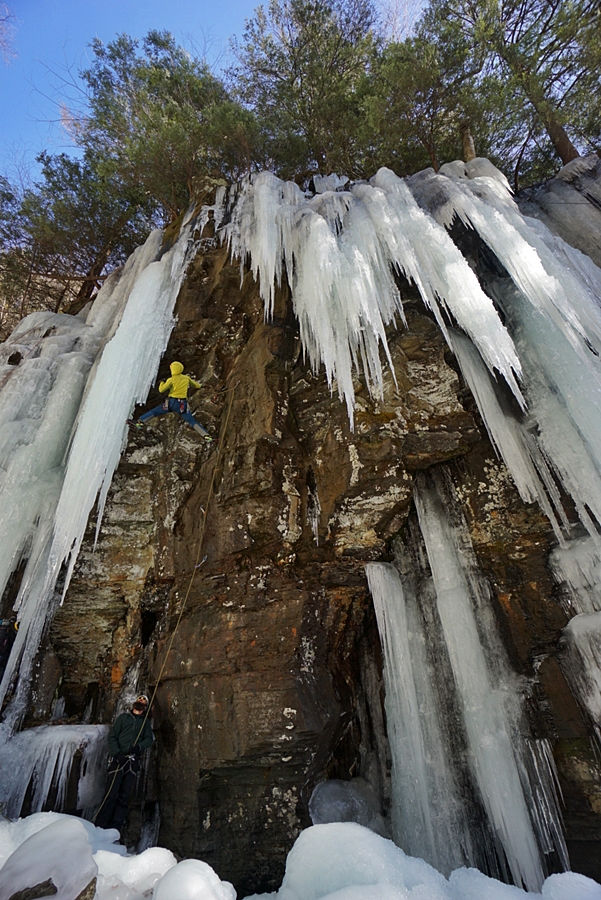 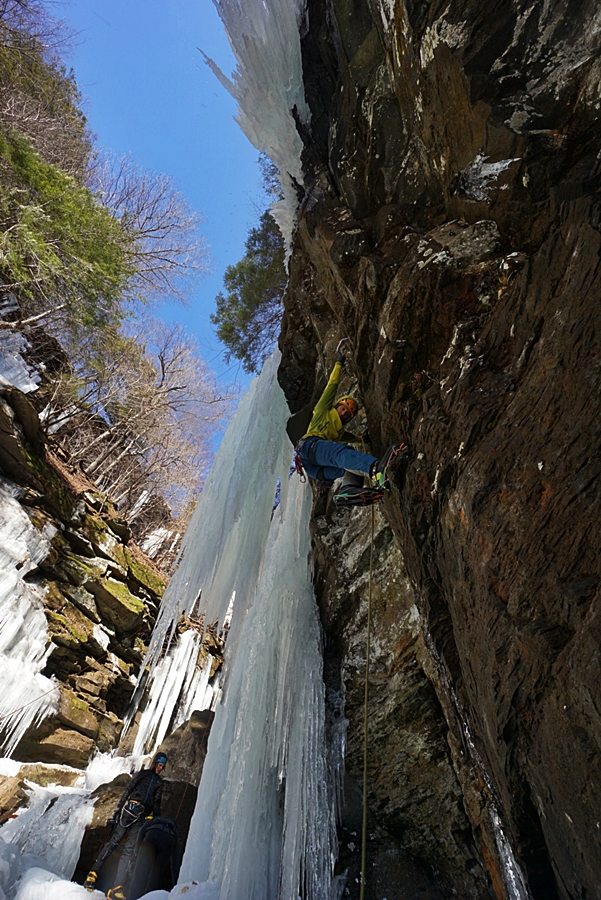 And another… Credit, Marty Molitoris.