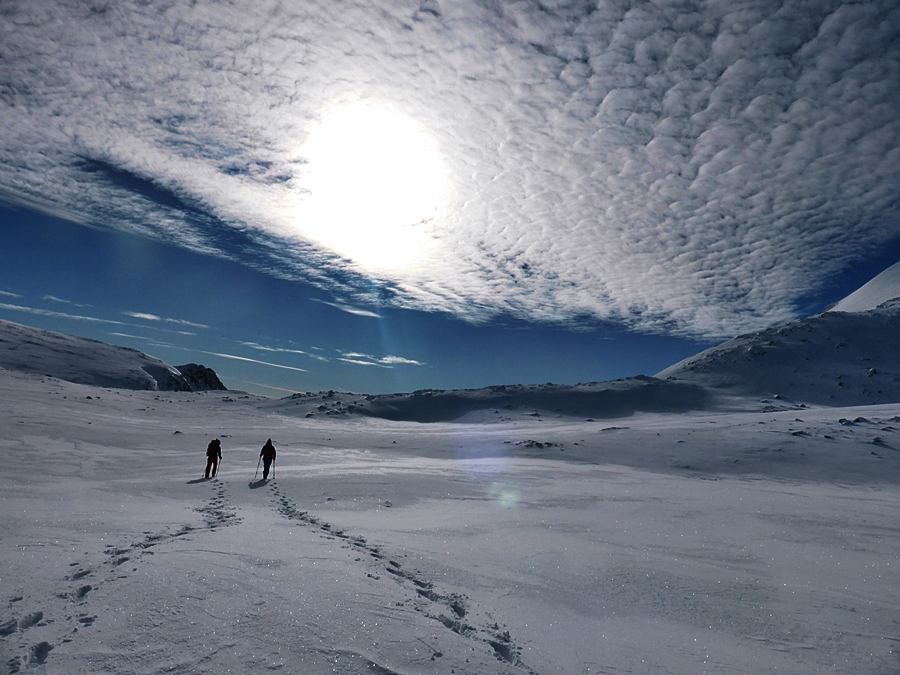 Guy Robertson and Andy Inglis approaching the col before dropping beneath the Southeast Face of Coire Ghranda, Beinn Dearg

Sat by myself, I drive north from Llanberis.

Several hours later, just over the Kessock Bridge, the bridge that crosses the Beauly Firth in Inverness, I turn into the tourist information centre and set about to wait. Sitting, eating a sandwich, listening to Radio 4 – the sun, between the clouds, sets and over the water, a fire of shadows stirs.

Turning off the radio, the gentle sway of sea and the call of birds can be heard between the cars passing on the road behind.

Guy Robertson, the Highland Powerball, who like me, has become somewhat tempered with the passing years, arrives and we travel together, in my red van, towards Ullapool.

Eighteen years since my last visit to the town set on the side of Loch Broom, Ullapool was as I remembered – thick walled houses made from sandstone, short and stock and sturdy, making me, for some reason, think of wild ponies.

Not moving an inch, fishing boats sit in silence, moored to the quay that has nets and chains, yellow plastic crates, stacked lobster pots, weathered wooden boxes. Large pink floats the shape of space hoppers but without a smiley face, hang from the side of the fishing boats. Waiting. The boats wait. The sea waits. Eighteen years. Time waits for no one.

We drive past the bar that years before, on a New Years eve, Jon Bracey and I meet people that became friends, drifted, reacquainted, drifted… The bar tonight was closed and dark, no shadows, no ceilidh, no sloshing pints, no burn of single malt – just a brief echo, a glimmer.

Tesco carpark, shining chrome bars and blue neon feels out of place, but on meeting Andy Inglis, who is sat waiting inside the dark of his car, he appears to fit well with the landscape surrounding Ullapool.

Driving into the night, following Andy, a deer jumps from the heather and runs into the glittering road. Caught in the lights, she looks almost surprised. I brake and swerve, looking more than almost surprised. Fortunately, the road is wide enough for the both of us and she scutters off into the heathery bog. In the black ink above, the northern lights shimmer in ethereal waves. 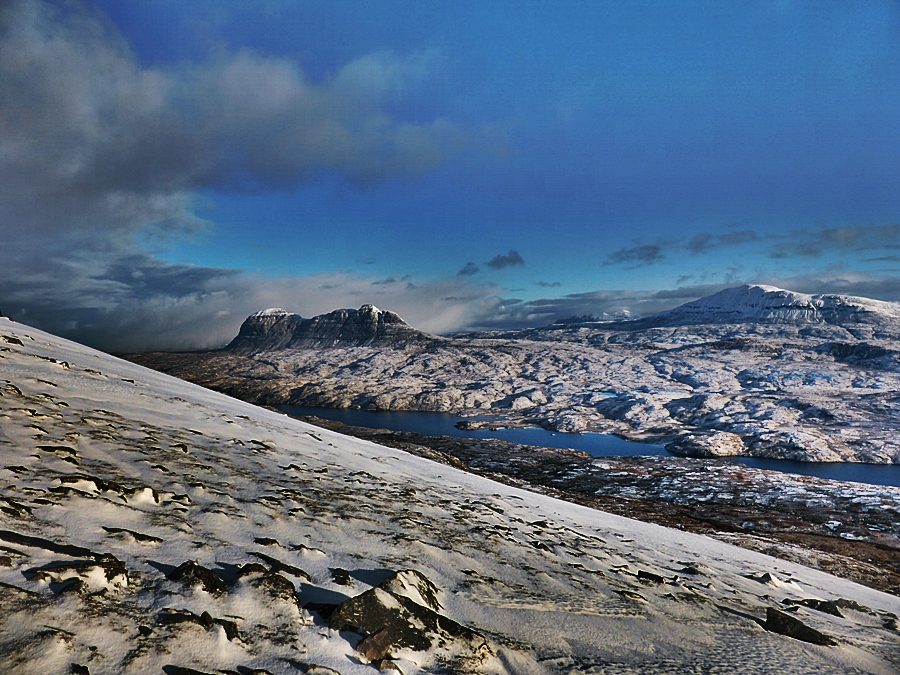 Looking towards Suilven on the walk in to Cùl Mòr. 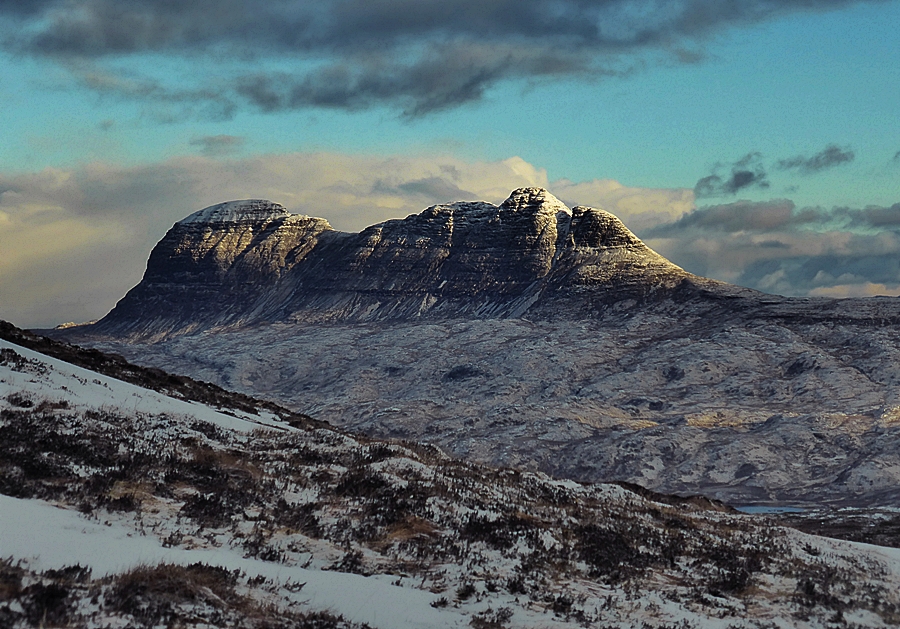 Early the next day, clouds pour over Suilven and its long ridge. The sea behind, a dark sheet, full of life, is flat. The land is a quiver with white and green and brown. Lochs – those pools of deep and quiet, appear imprisoned within the earth, yearning to join the sea, but like a child who has lost a parent, they will never join again.

A shaft of sun splits cloud. Shadows of the three of us, stretch and lead the way to Cùl Mòr where an ephemeral single silver streak, a wrecking light, waits.

Later, stood on the summit of Cùl Mòr, the green sea, in front stretches to infinity ans Suilven is to my right and above, a pair of eagles wheel on massive wings.

From the summit of Cùl Mòr. Credit, Guy Robertson. 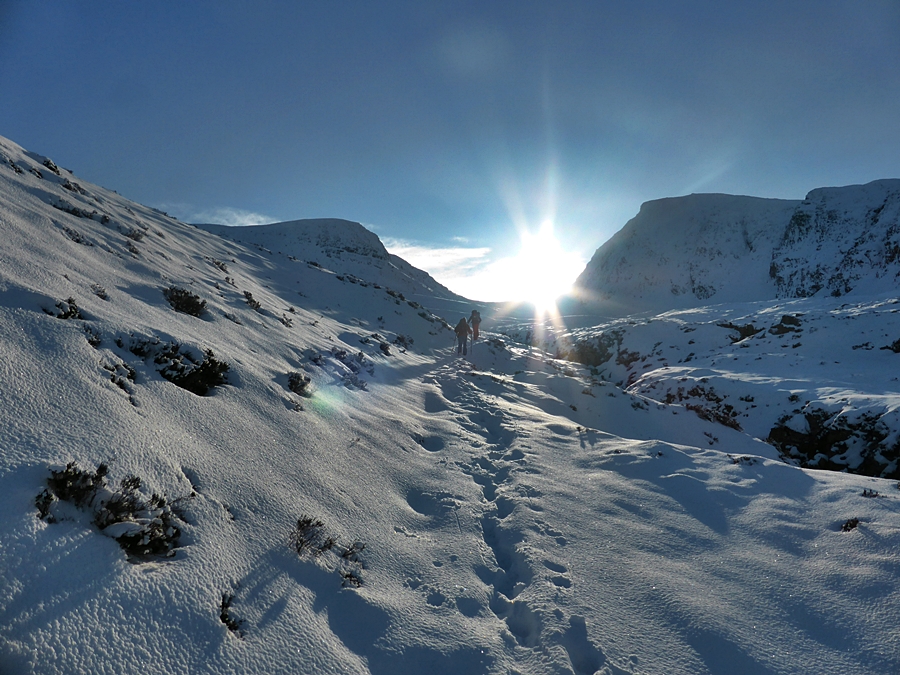 The second day of climbing had more walking than the first. Coire Ghranda on Beinn Dearg held on to its secrets as if embarrassed, but at long last, after four hours, we gaze at the cliff.

Ice Bomb, yet another Fowler gem is todays present, all wrapped in ice and mystique but the real prize is completing the climb in its entirety.

And as the sun beats and the clock ticks we begin… 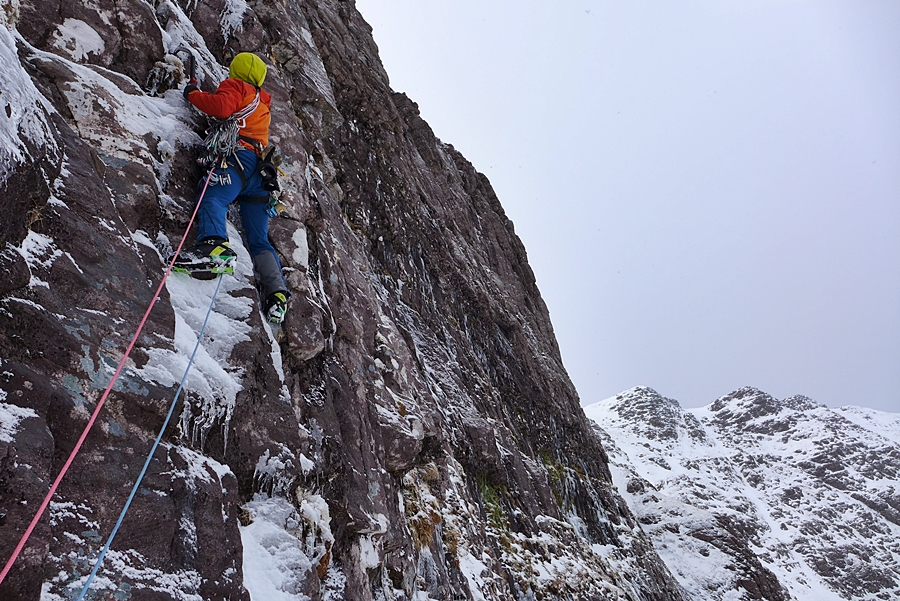 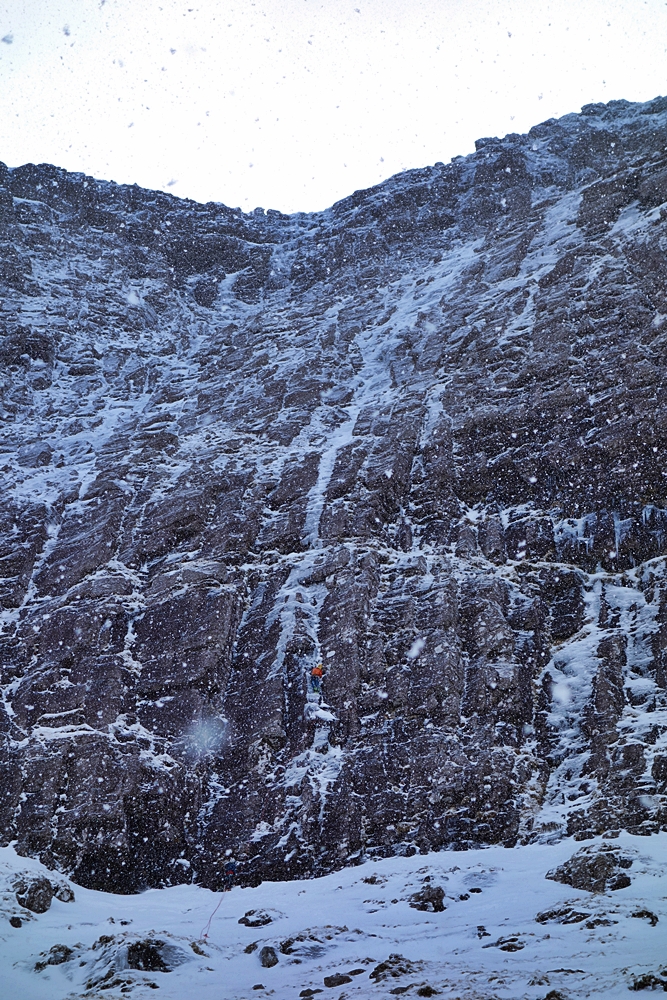 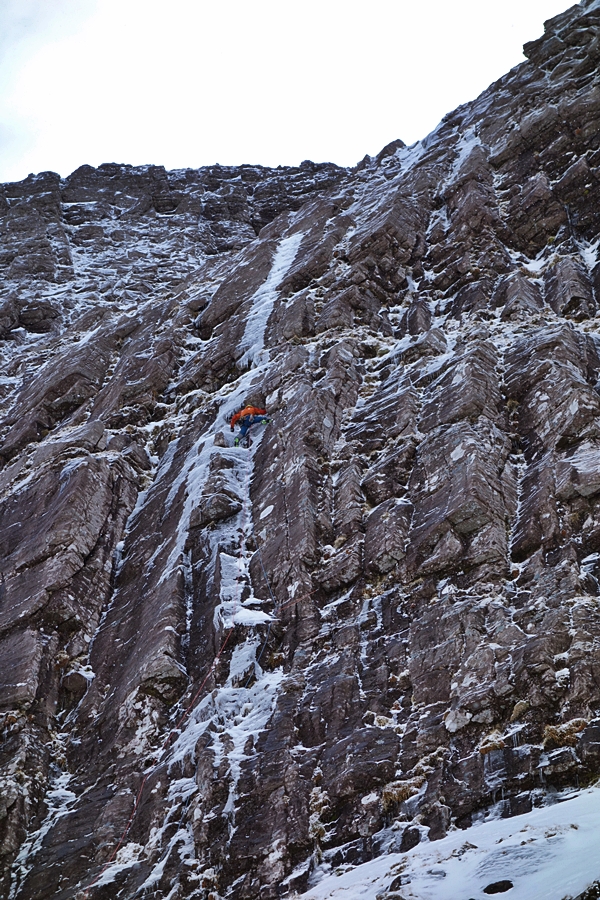 Myself on the first pitch of The Wrecking Light. Credit, Andy Inglis. 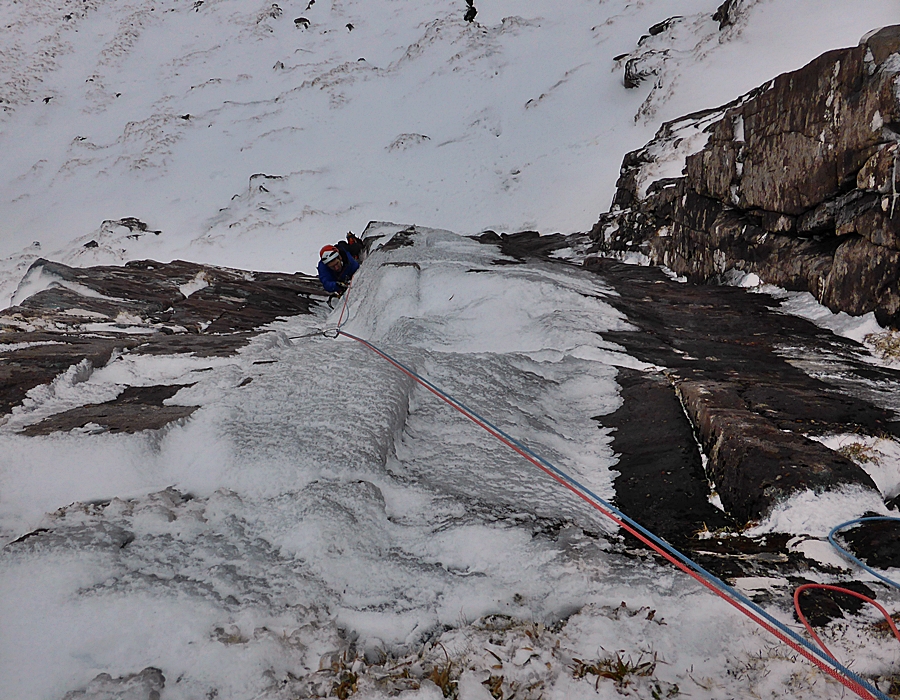 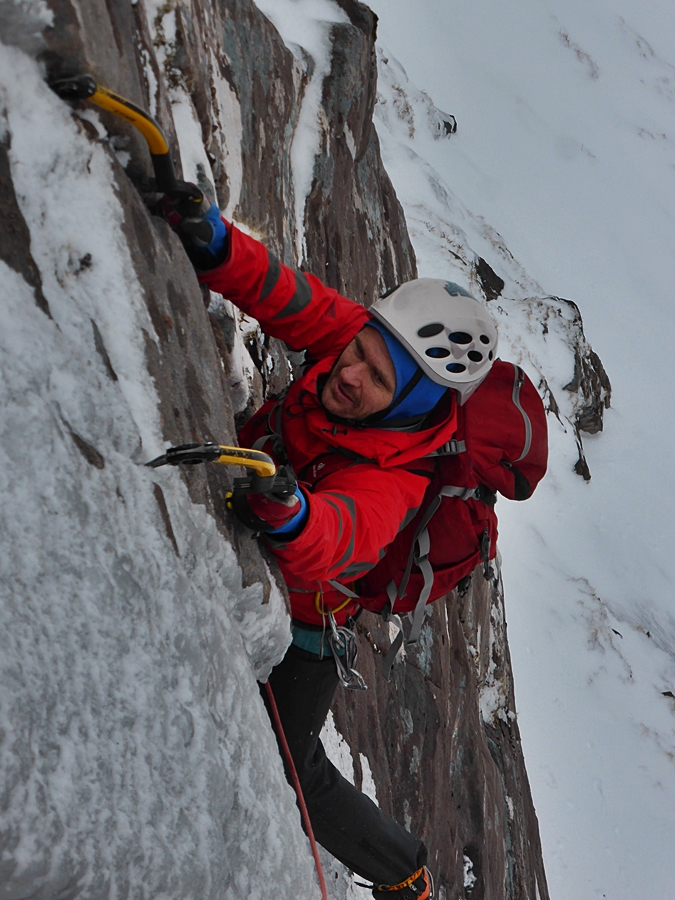 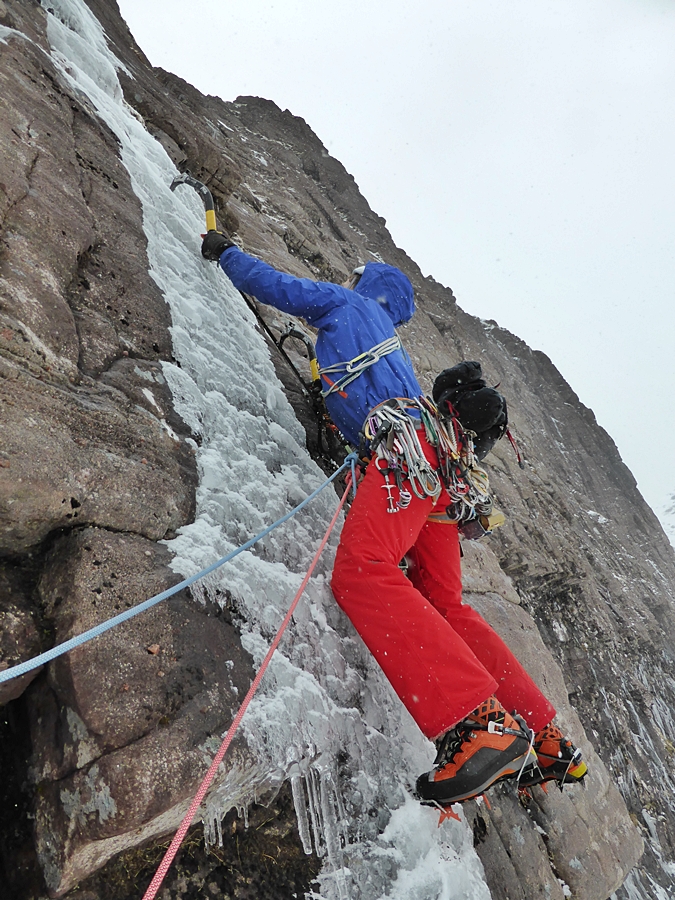 Andy setting off on the second pitch of The Wrecking Light. Credit, Nick Bullock. 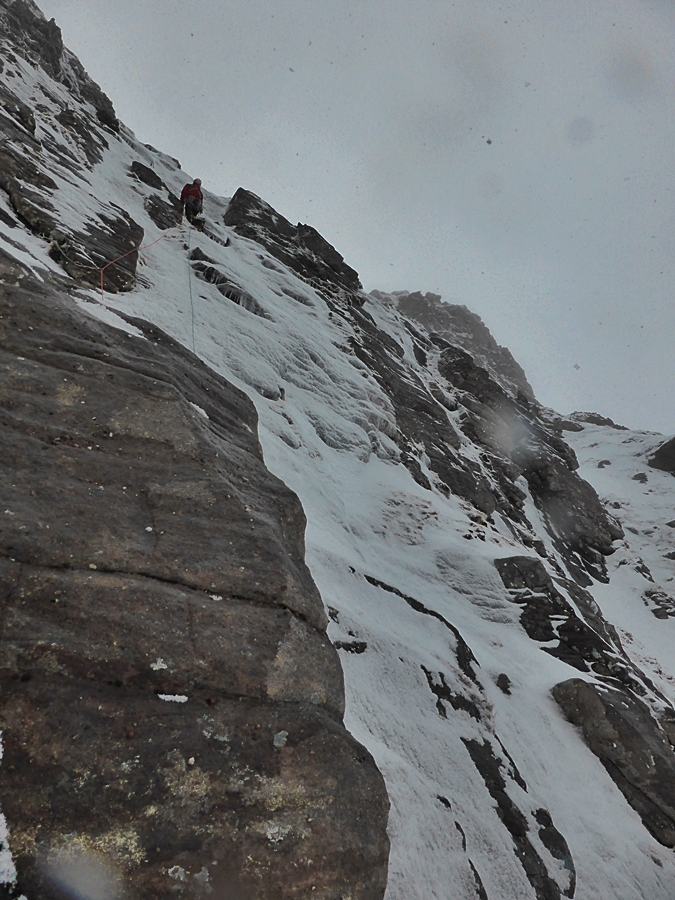 Guy Robertson on the third pitch of The Wrecking Light. Credit, Nick Bullock. 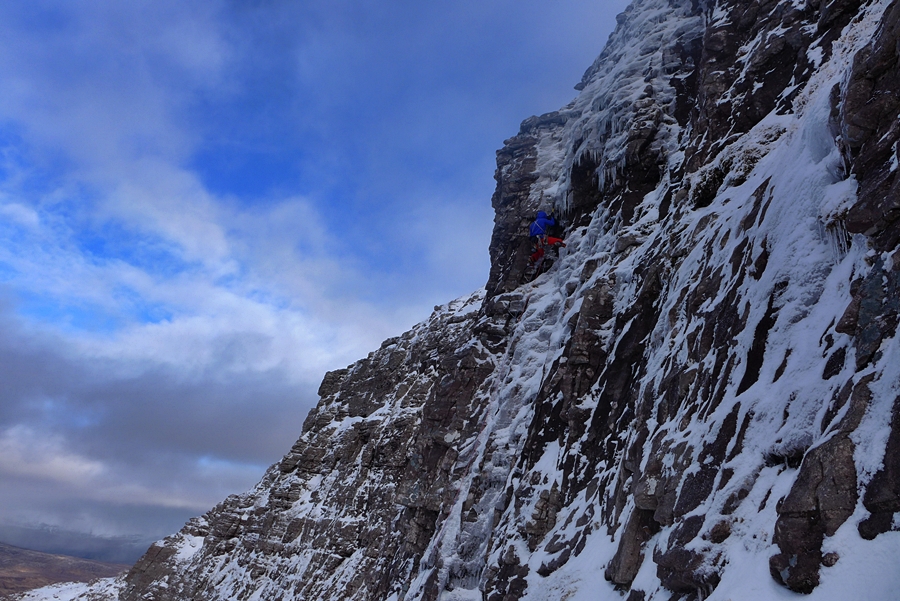 Andy Inglis on the fourth pitch of The Wrecking Light. Credit, Nick Bullock. 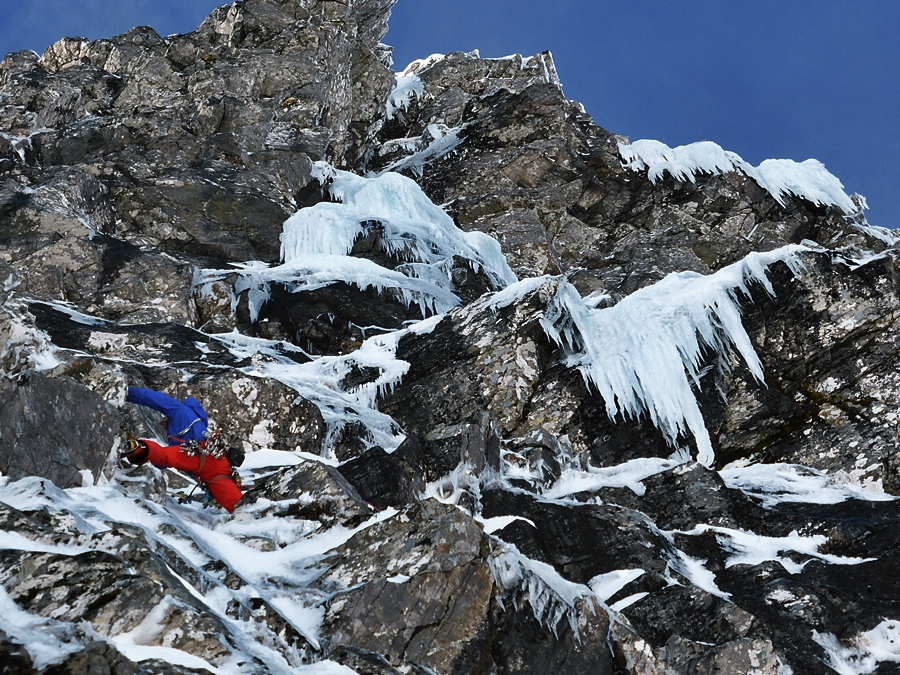 Andy Inglis on the first pitch of Ice Bomb. Ice Bomb was first climbed in 1988 by Mick Fowler and Dave Wilkinson. Beneath the overhanging top chimney, Fowler tensioned left and climbed a line on the face/arete to the left leaving the second ascent but the first true ascent of the line to be climbed. On the 7.3.16 Guy Robertson, Andy Inglis and I climbed the whole line, including the overhanging top chimney. The grade is bench mark old school Fowler VI and we called it the Mind Bomb Finish. 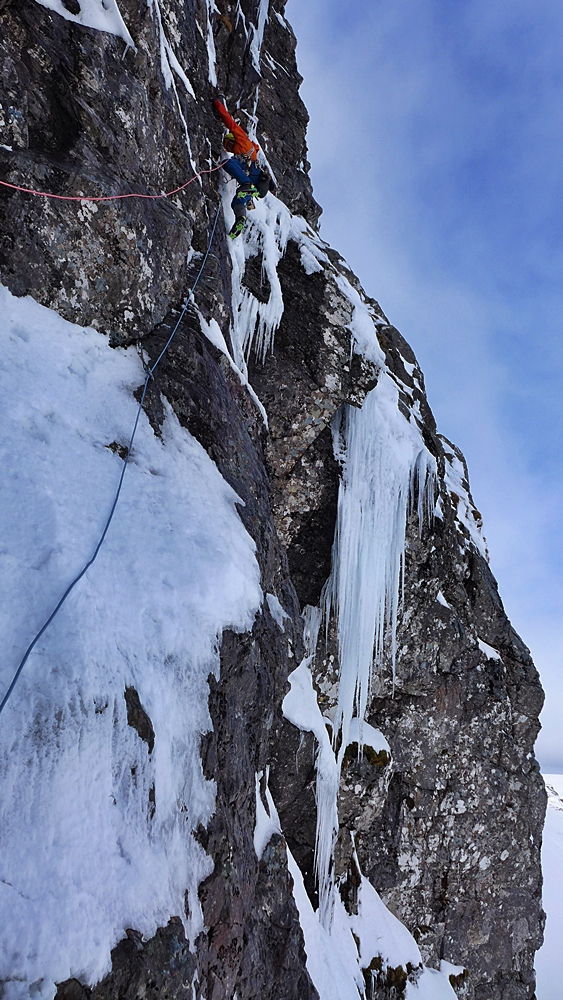 Myself on pitch two of Ice Bomb. Credit, Guy Robertson. 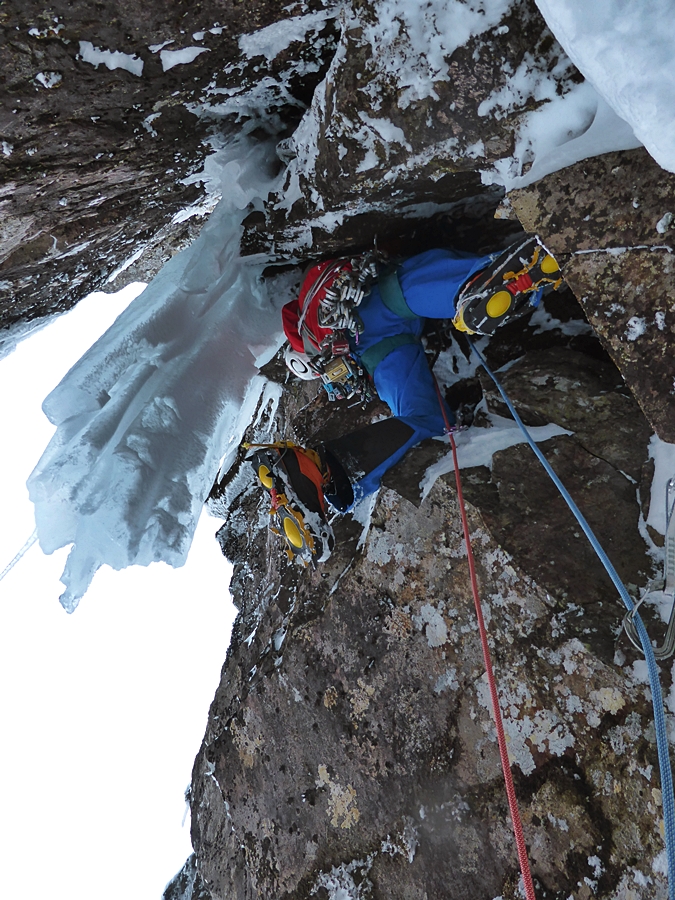 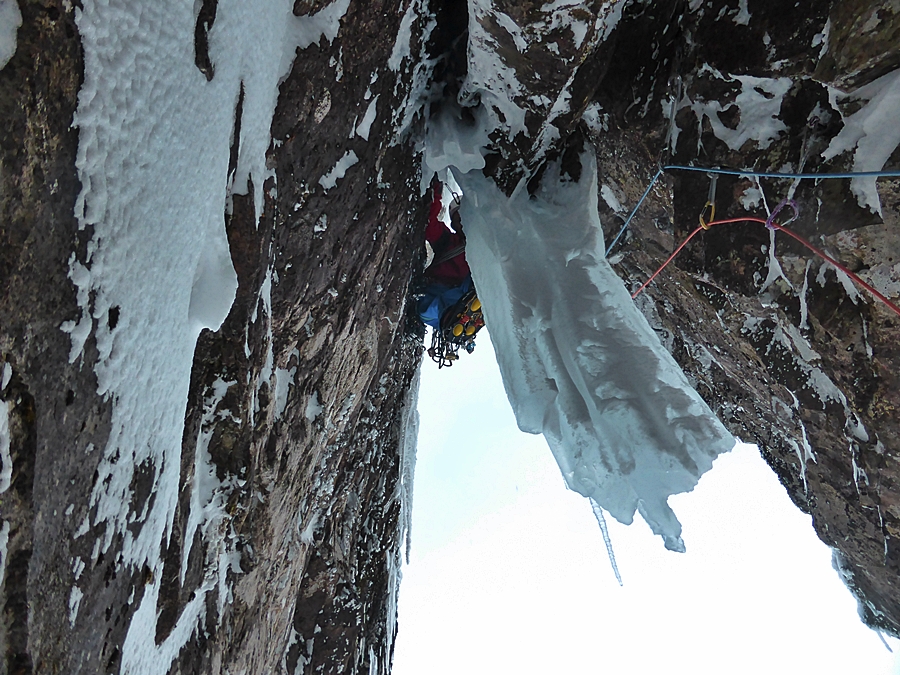 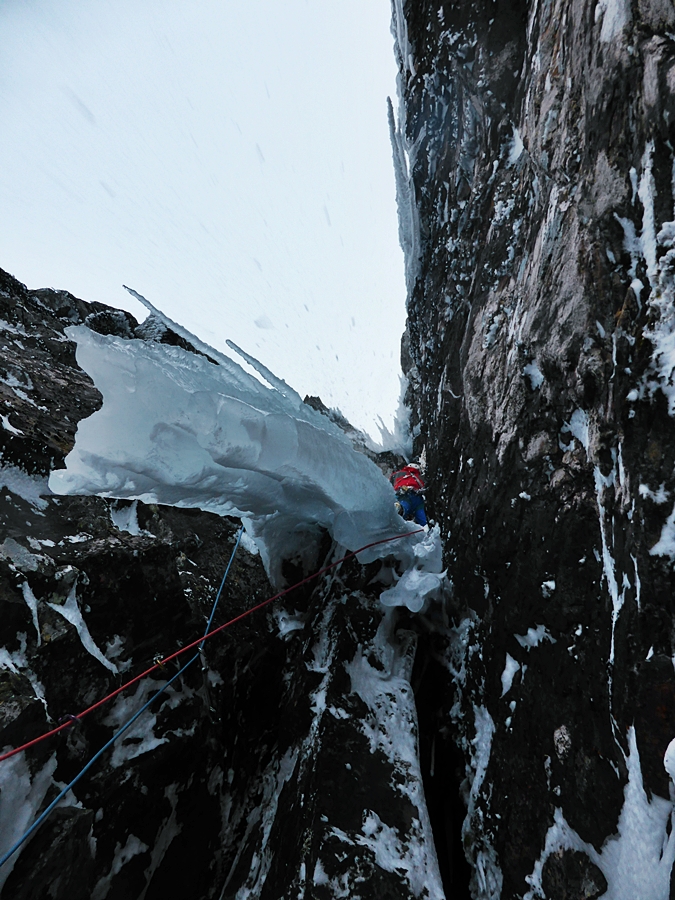 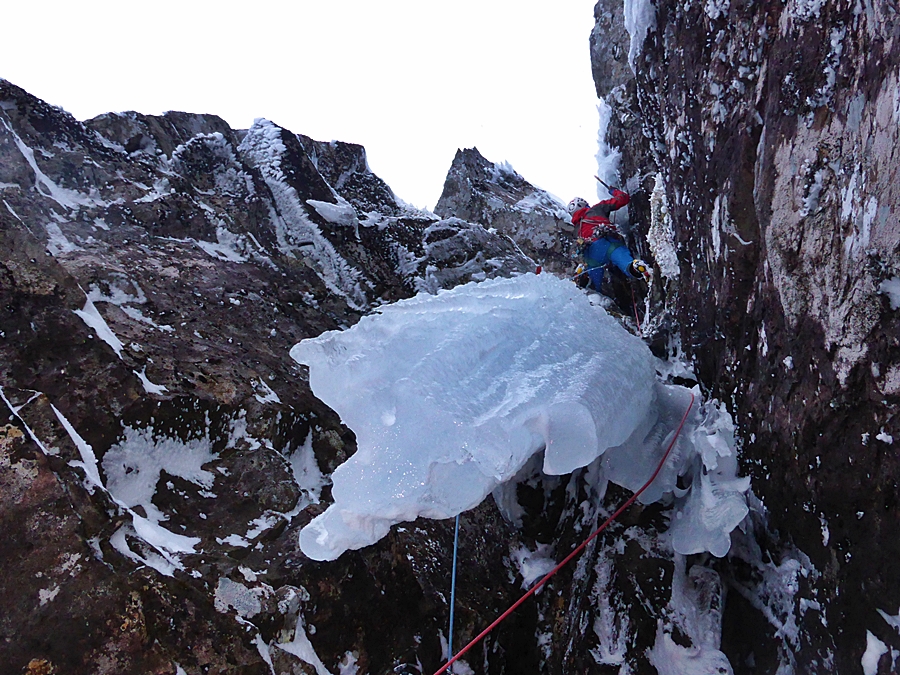