On the summit of Ysgolian Duon, The Black Ladders in the Carneddau, North Wales above the town of Bethesda. January 2013. Pic credit, Tim Neill. 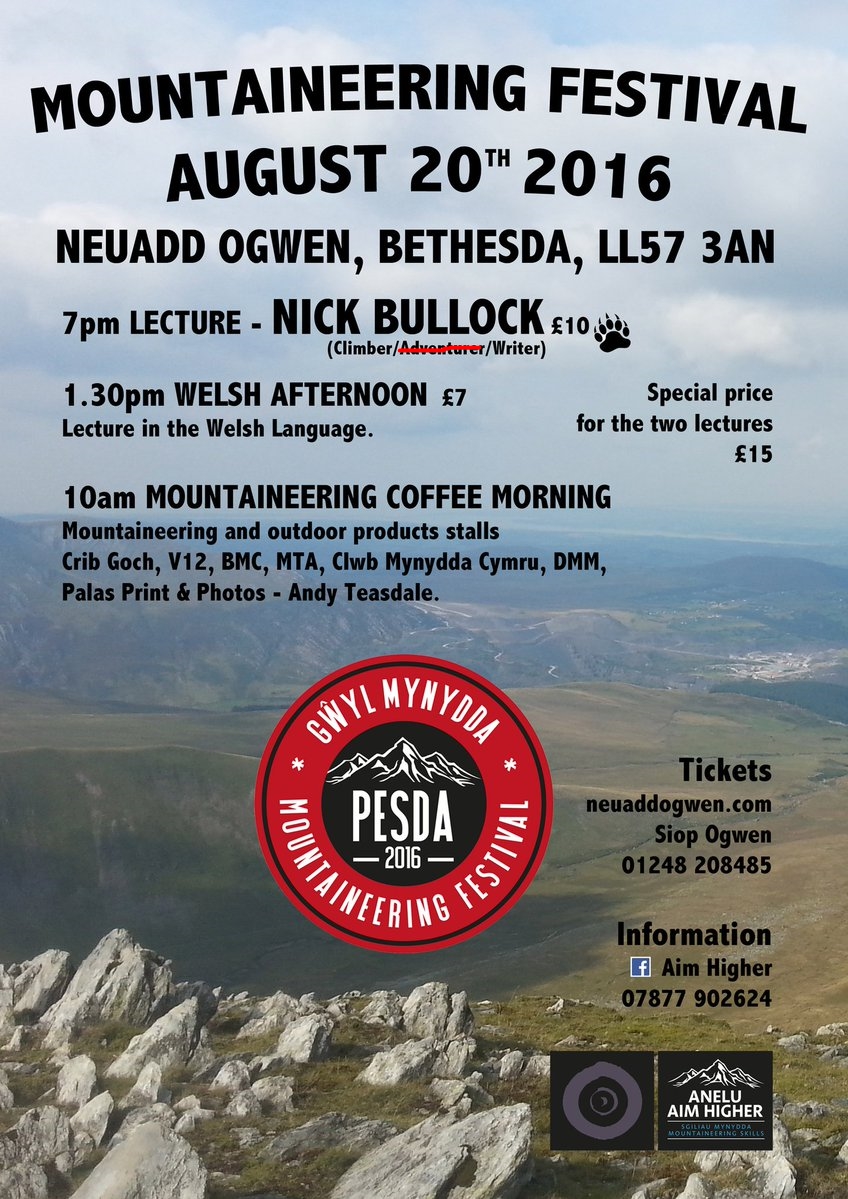 The PESDA poster with everything you need to know if you want to come along and a slight alteration as I don’t see myself and certainly would not describe myself as an adventurer. Being described as an adventurer nowadays makes me think of people like Bear Grylls and the like, people who want to do the motivational lecture circuit and be a household name and make a load of cash while attempting to disguise it in a package of  ‘inspire others to live the dream’ and all the other over worked clichés that usually abound that always include the words, empower, extraordinary, amazing, conquer. Yes, it’s my problem that I am more than willing to admit, just don’t call me an adventurer 😉

This time last year, maybe a little earlier, I met Paul Ramsden while cat sitting in the Hippy’s house in Waunfawr. Paul had driven over to chat about travelling to Tibet to try and climb a new route on a seven thousand metre mountain. At the time of meeting and speaking to Paul, I knew, if the trip looked like happening, I would dedicate my 2016 summer to being in Wales, writing, training and climbing and in that order.

It is now summer 2016. The flight to Tibet is booked and the issue of the permit is a distinct possibility, although as I have found out since become involved with this trip, nothing is guaranteed when attempting to climb in Tibet.

As promised to myself, I have remained in Wales. Every day I have spent the mornings writing and editing the fourth draft of my second book and the afternoons have taken the form of running, cycling or circuit training (obviously not all on the same afternoon, only Matt Helliker could do that!). The evenings have generally involved a visit to The Beacon climbing wall. On a rare occasion, through the working week, I have trad climbed, but more often than not, climbing outdoors has only happened on the weekend.

An unseen benefit of staying in Wales for the summer is being able to present a lecture at the Mountaineering Festival taking place in Bethesda on the 20th of August. I must admit there is more than a little irony in this…

In January 2013, I wrote a piece about winter climbing on Ysgolian Duon, The Black Ladders, and Llech Ddu, both cliffs in the Carneddau of North Wales situated above the town of Bethesda, which you can read here. North Wales, and in particular, Llanberis and the surrounding area, is the place I now feel most comfortable, its home, I have found no-where I prefer to be when I am not climbing somewhere else in the world, but in 2013, via an email to Chris Rowlands at DMM and Duncan Machin at Mountain Equipment, I was told by one person I was not welcome in Bethesda.

Back in the winter of 2013, after writing my blog, I was surprised when my friend and overseas brand manager at DMM, Chris, called me over one cold and wet afternoon when I visited the offices of DMM intent on snaffling some bandwidth.

I walked across the warm office. The usual clatter and chatter and trill of phones was my soundtrack.

Chris pointed me at his computer screen and an email. The email was from an unhappy man who said he was a mountain instructor living in Bethesda and he was angry by my description of Bethesda. It turned out he had also contacted and complained to Duncan Machin at Mountain Equipment. I don’t recall the exact wording of the email, but it followed something along these lines, he was friends with many Plas y Brenin instructors and they were also pissed off with my description of the town, which I must admit to being a little surprised as I am also very good friends with many of the staff at The Brenin, in fact I had been climbing with one of them in the account on the blog, Tim Neill, and not one of the Brenin staff had said anything to me about the piece. He then went on to say to Chris and Duncan I should be controlled, censored, taken in hand, dressed down and I should be ordered to remove my piece. As I said above, I don’t remember the exact wording of the email, but this was the conclusion I drew. I also surmised he was telling my sponsors they should think about ending their relationship with me because I had written this piece with their endorsement. To say I was a little taken back by this email is understatement, especially considering the content of my blog which for me was very controlled.

When Stephen Jones, mountain instructor from Bethesda contacted me to ask if I would be interested in presenting a lecture at the Mountaineering Festival in Bethesda, I must admit to feeling a little awkward amusement, as at the time, I couldn’t, and still don’t, remember the name of the guy who emailed my sponsors, and I wondered if it was Steve and he was setting a trap.

I imagined myself agreeing to meet him in Bethesda and being grabbed, beaten, tied, bagged and thrown in some dark cellar beneath Neuadd Ogwen, the venue for the festival, where after weeks in the dark, I would be force fed daffodils and pumped, ‘learn to speak Welsh’ on replay.

So, it was with more than a little trepidation a few weeks ago, I parked my red van down the road from Neuadd Ogwen. I left the van door unlocked and the engine running and parked at the far end of a lay-by pointing towards England.

Walking the pavement toward Neuadd Ogwen, I felt similar to what I imagine Jason Bourne feels. I studied the passing cars and cyclists, I flashed a glance at the upstairs windows, the old lady walking toward me with her attack Corgi could be in disguise, she could be a hit woman. So, it was with a huge sigh of relief, I pushed the glass doors open of Neuadd Ogwen and entered the dark room. Two guys stood chatting in Welsh. This was it, this was where it was all to end. I was never to be seen again, I was doomed, my mouth puckered in anticipation of green and yellow Daffodil juice…

“Hi Nick, how you doing?” The bigger guy said thrusting his hand toward me.

It’s a trap, it’s a trap, he’ll grab my hand and perform some type of Welsh Kung Fu.

I took his hand expecting the worse and apart from a firm grip, there was nothing more, no, I lie, there was more, there was warmth and enthusiasm and a big friendly smile.

“Steve I presume, nice to meet you.”

That was what I said, although what I thought was, ‘Steve, nice to meet you, even better to not be tied up and stuffed in a bag and thrown into the cellar.’

Steve then introduced me Dilwyn, the manager, who was also very friendly and helpful and didn’t appear to hate or want to cosh and bag me, and if anything, Dilwyn appeared more psyched than Steve. My day was already feeling a success, but, by the end of our meeting and chat and walk around Neuadd Ogwen, I was feeling much more than success, the venue was great. I could not believe I didn’t know the place existed, and the ebullience both Steve and Dilwyn emitted about the festival and Bethesda was infectious.

At times it’s easy to focus on face value and not stop to think about what’s happening beneath the skin and make a knee jerk reaction. I say this two-fold, because I make no apology about my original blog, it was a factual description of what I saw at the time and I made no judgement about Bethesda or the people who live in Bethesda, apart from I would imagine life for some in the town is a struggle and I felt a little awkward and rather privileged walking through the town wearing expensive clothes, but I suppose could have also focused on some of the less obvious, the good things happening in the community, or at least hinted at them. I could have suggested that given more support and encouragement the town could thrive, it could have the same buzz as Llanberis, but I didn’t, it didn’t fit with the piece and if I am honest, it didn’t occur to me to do this. But being involved now with Steve and with PESDA, the mountaineering festival, it is obvious there are many people who are committed and have their hearts set on improvement and growth in Bethesda and this is certainly something to write about and support.

It turns out that Steve was not the person who complained about my blog piece, so on the 20th of August I will be the one dressed in a suit of armour and shouting about cold topics including Canadian ice and mixed, Canadian alpine on Mt Alberta’s North Face with the second ascent of The House/Anderson, some episode with a bear that you may not have heard about where Greg Boswell plays Leonardo Dicaprio, falling off a mixed climb while belayed by Steve House, going feral with Tim Emmett and a film by Jack Geldard and Nick Brown of me puntering my way up a hard climb in the Rive Gauche while belayed by Jeff Mercier who is laughing!