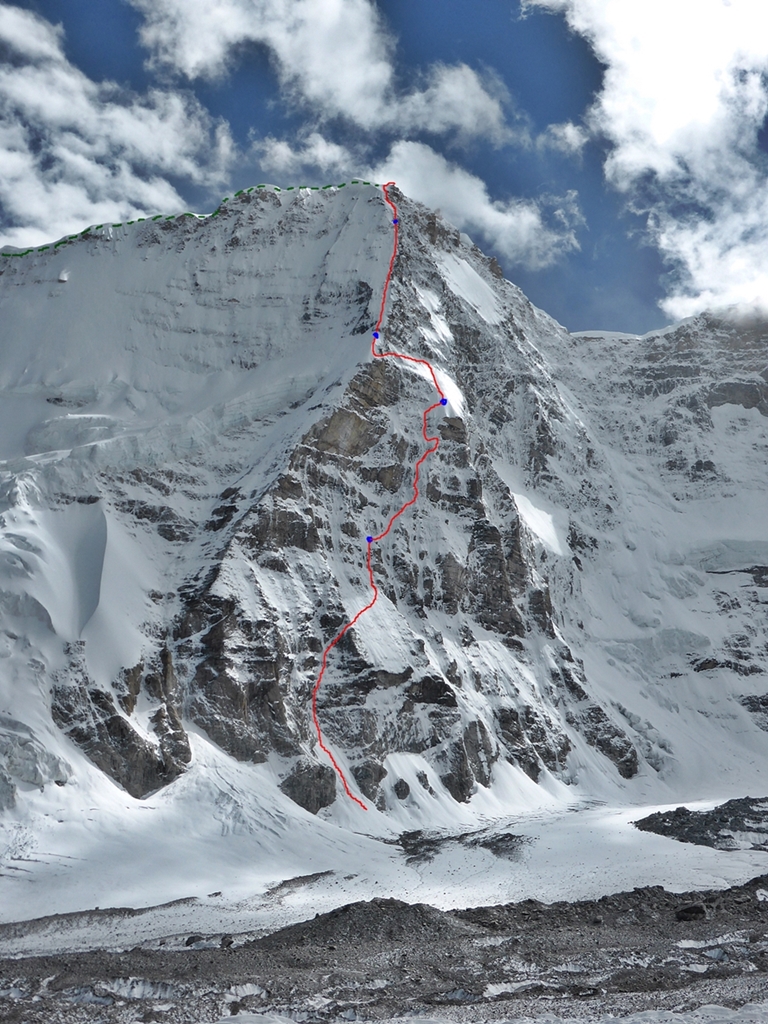 The North Buttress of Nyainqentangla South East first ascent by Paul Ramsden/Nick Bullock. 1600m. ED+
Descent via the East Ridge into the South Valley. October 2nd and back into the valley, 8th.

I sat in our tent and blue stripe tarp, our makeshift home. Paul Ramsden sat nearby. To our left the fast flowing glacial river pounded grey rocks – rocks rubbed smooth by the constant grey flow. To our knowledge we were the first Westerners to explore this valley on the North on the Nyainqentangla peaks. “No, that’s not the side to climb from.” That one always makes me warm. “No that’s not the side to climb from, it’s too steep, no one has climbed from that side. Truth be told, hardly anyone had climbed from either side, the small sub-range range, which holds the four highest mountains in the whole of the thousand-mile East and West Nyainqentangla was an enigma, an unknown, a very difficult to get permission, a magician’s trick, but the Yorkshire man who was sat on my right had somehow managed it.

A few days had passed and it was now time to acclimatise and see what the range revealed, what would unfold. Until now we had only seen a few long distance photos taken by Tom Nakamura, great shots that opened the imagination but none truly undressed the range, they teased with possibilities, but we would need to walk the seven or eight miles to become involved and begin this relationship.

There was obviously the ridge on the pointed Nyainqentangla I, but there had to more? In emails before the trip Paul had often mentioned the big North Face almost hidden in all pictures, but on Google Earth he had scoped and suggested there might be opportunities.
We left BC burdened with packs large enough to stay away for several days. Easy does it, BC was at a height of 5000m, so we stopped in a small grassy fold behind a prominent moraine ridge with a stream and Yaks at 5400m. Looking across at the four 7000m mountains, two of which were reportedly unclimbed, the anticipation heightened as ice runnels could just be seen in the bottom half of one of the unclimbed monoliths that the locals knew as Nyainqentangla South East and it was this face that Paul had shown much interest. 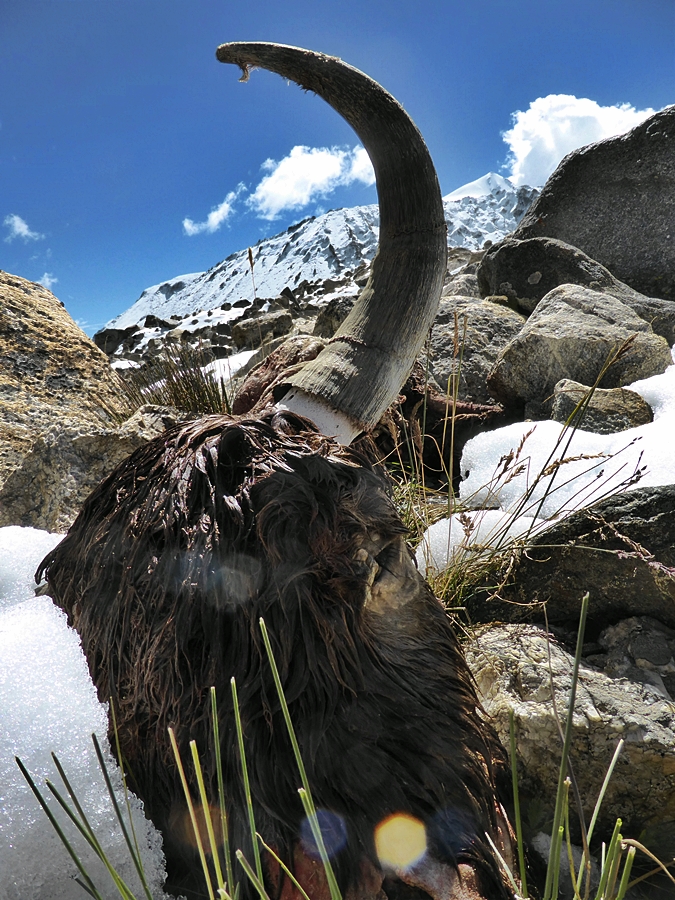 Day two of the acclimatisation came, we stumbled a little higher sending rocks splintering while large birds passed high overhead before eventually setting camp in the afternoon. The mystery face opened, it was dramatic, triangular, overhanging, a wonder… The charge between Paul and myself crackled. This face, this unclimbed face on an unclimbed mountain was almost impossible to describe without using superlatives, it was a dream, it had runnels, ice, fields of snow, arêtes – the face twisted and turned in some warped massive monster Matterhorn way and we fathomed, from our position, that the climbing started at 5400m and the summit was a reported 7046m, making the face a mouth-puckering 1600m. Paul and I stood and weaved imagined lines, we didn’t need to look any farther for our objective. 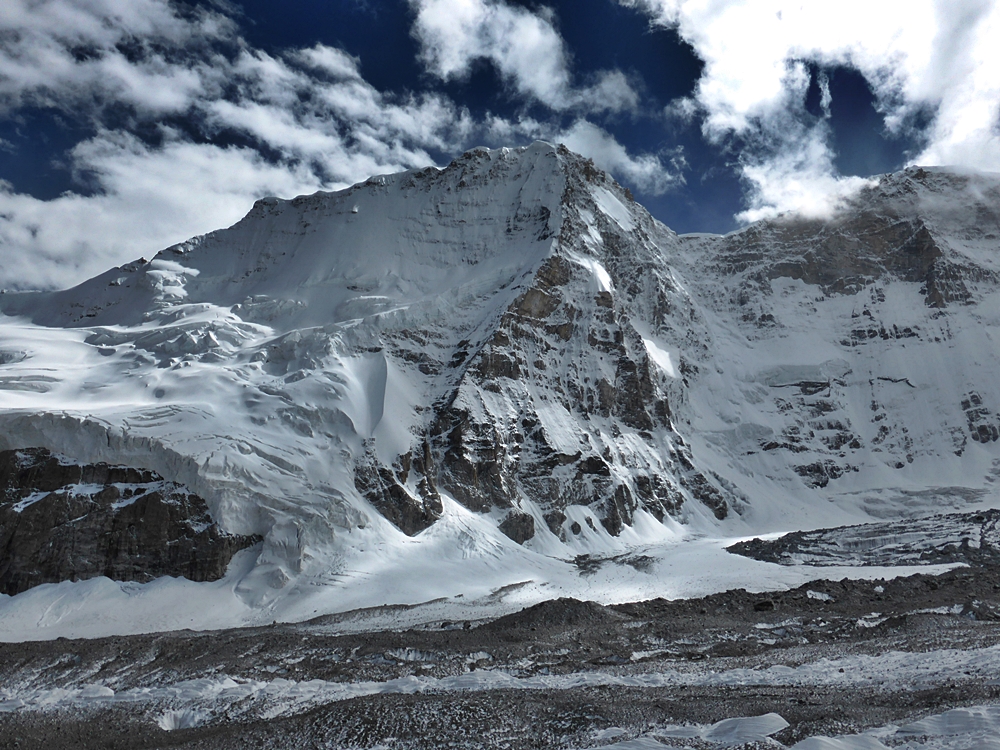 The weather in the range was complicated. Most days had sun, rain, snow, wind, sleet, cloud, storm, hail. No day was the same and mostly the weather of the moment only lasted for a little while before some other form of meteorological bruising took over. This climb was not going to be one of those wait for a perfect five-day forecast, which was OK, because we had absolutely no form of contact from which to get one, we were on our own. This climb was going to be a get involved and sit out the not so desirable until it hopefully passed. 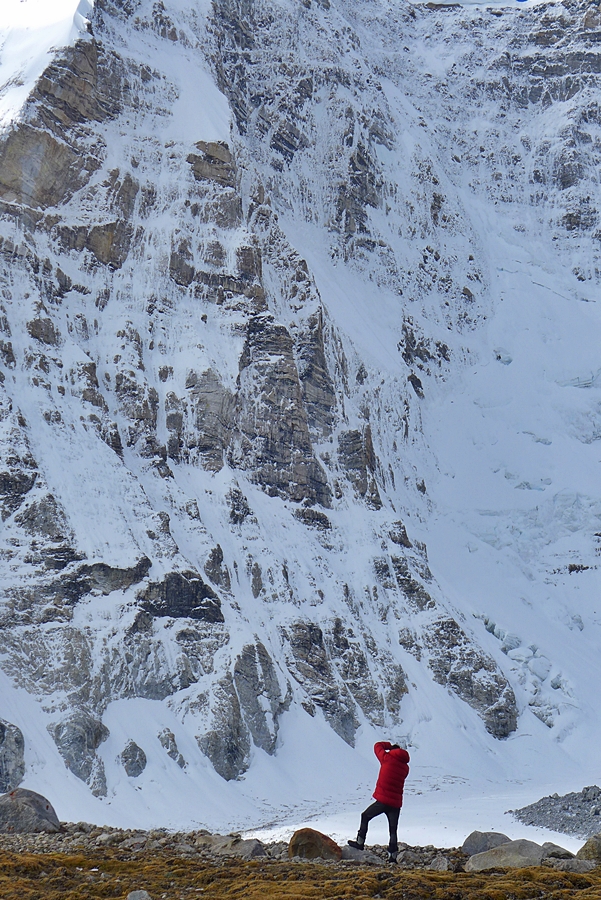 Checking it out on the acclimatisation. Pic credit, Paul Ramsden.

After the five days acclimatisation, some bad weather, some resting (for me), Paul and I walked up the valley with bags packed. Being camped beneath the triangular face made the word, insignificance, have meaning. The face was huge. In the night it hailed and snowed several inches. We had time, so we left all of the gear and ran away, but remember, this was a Ramsden trip and Ramsden does not really do waiting well, so after only one day of rest, we were again camped beneath the face. On this day of walking we had been granted our first full day of sun and dry since we arrived, it had to be a sign, a pointer from the gods, a good luck gift, but of course it wasn’t, it was just another card, an incitement pulled from the bag of weather tricks this range had in its pocket.

Day one was deep powder, post holing, some steep, some run-out, some exploring, but always dramatic and thrilling. We were on our way and once again the weather was holding tight, although it had to, and it had to hold for at least for another day because looking up at the steep and technical to come, on what we had already christened the crux day, the thought of been in those steep, sometimes overhanging ice runnels with powder pouring was too much to contemplate. 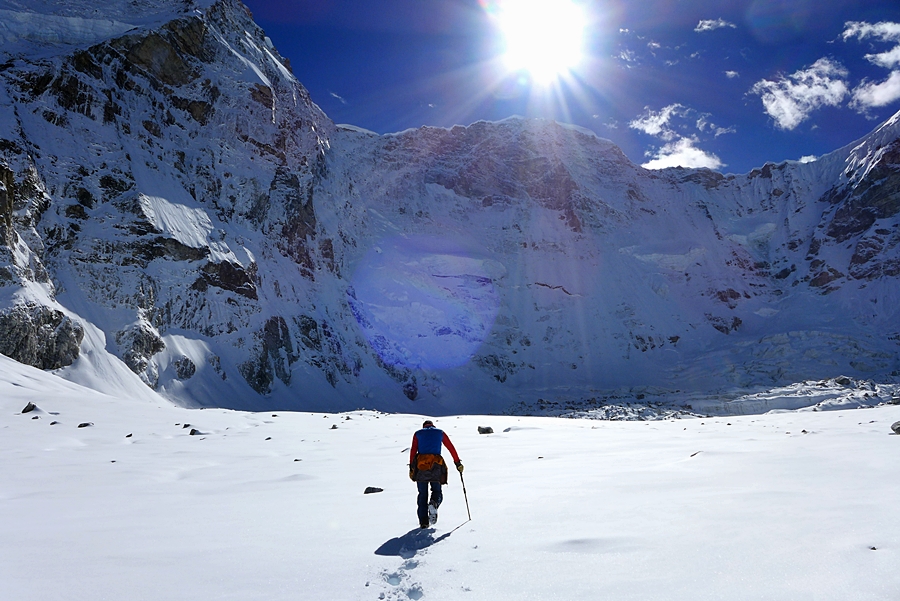 Myself taking the turn to put in a track the evening before… pic, Paul Ramsden. 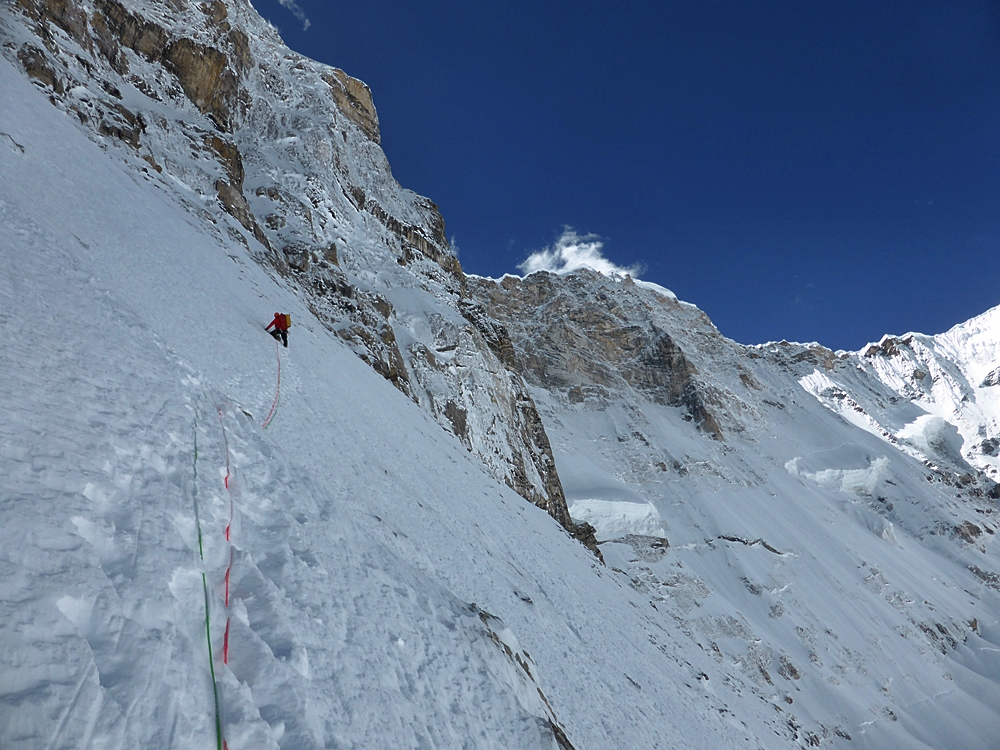 Paul on day one. 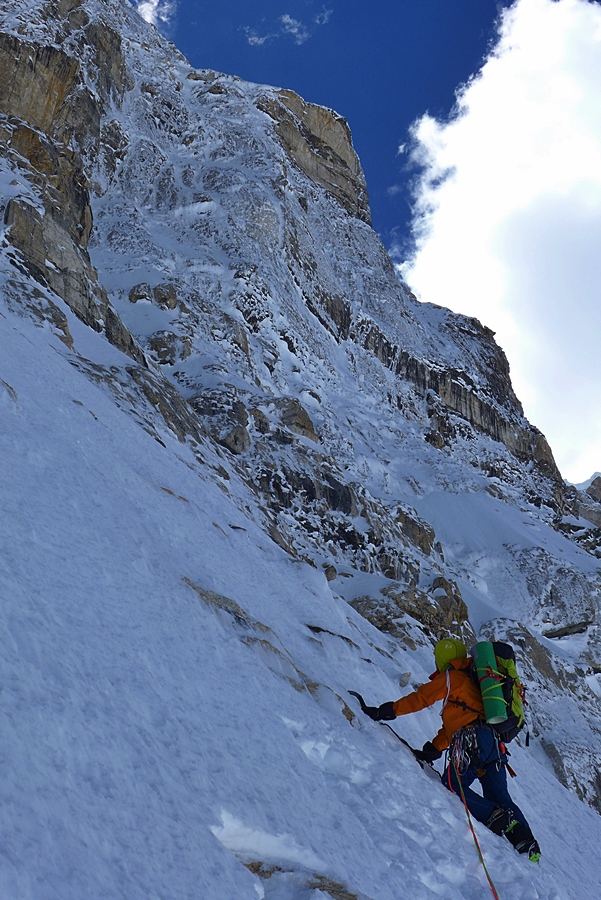 Day two, an open bivvy encouraged us to set off reasonably early. Luckily the steep nature of the ground we climbed now had formed névé and did we needed it.
Several hours later I pulled from the top of what first appeared to be an ice romp but what was in fact one of the harder pitches, which turned into a rotten, overhanging, lung straining, gut busting. Paul joined me looking a tad haggard for a Yorky and agreed we needed to bivvy. 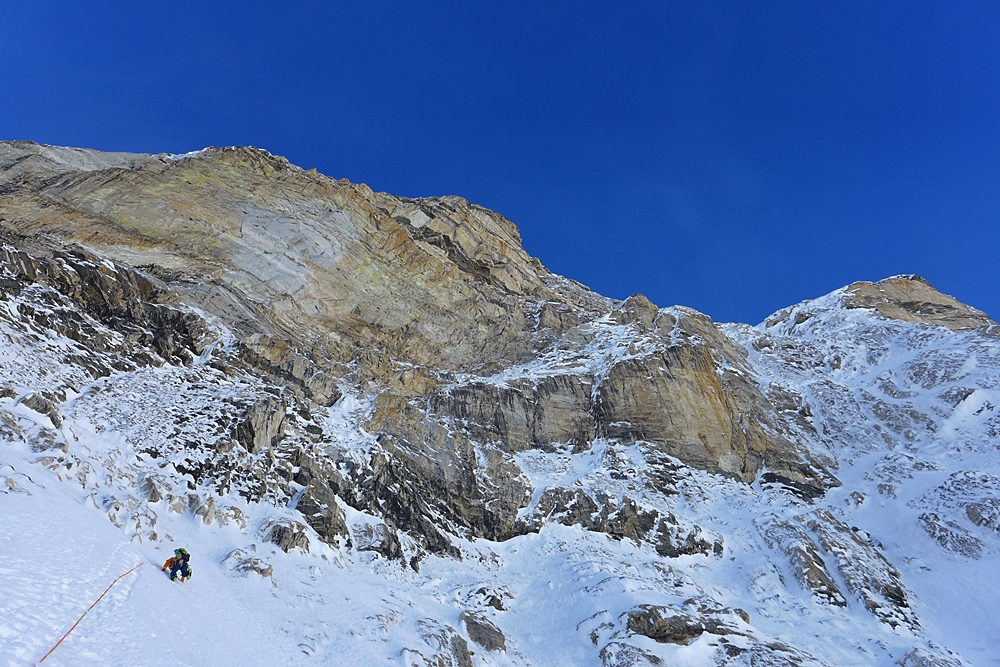 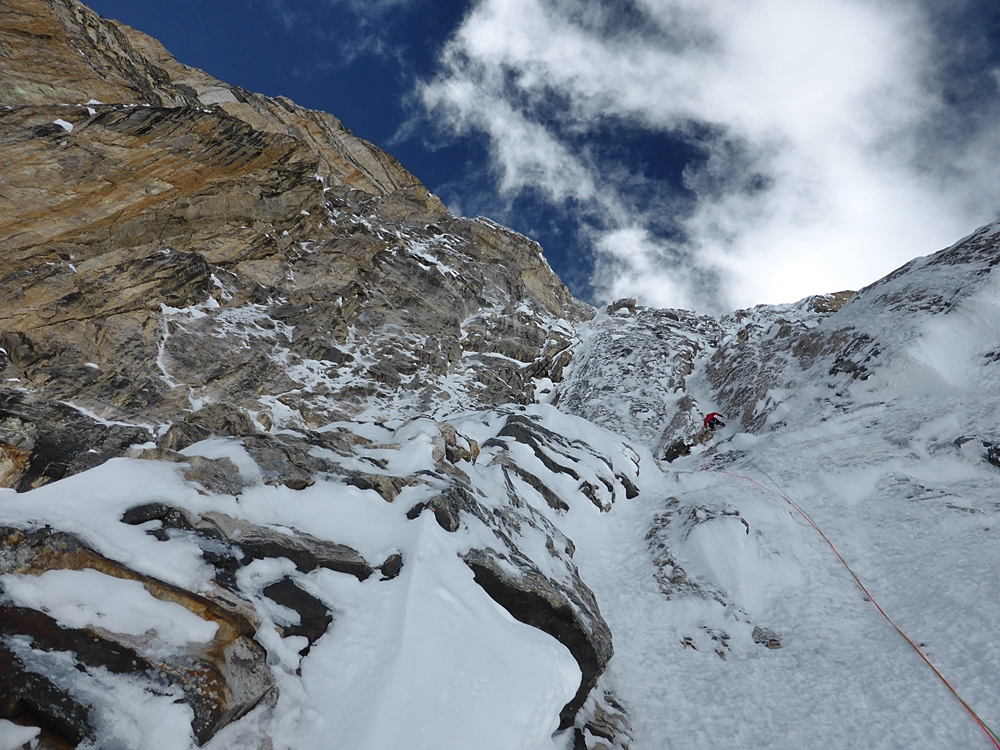 Paul on one of the steeper sections day two. 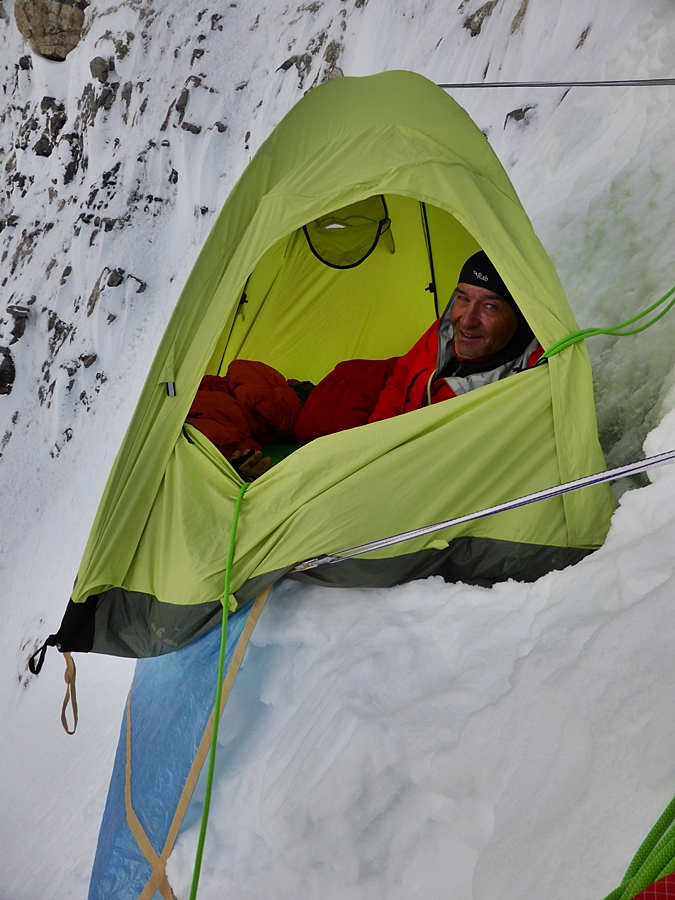 An excellent night was had by all! Paul happy with his tent and hammock.

Day three was a short one and decisive. We had originally spied a line joining the three ice fields to our right but after the first and physical two days, looking right filled both our heads with doubt, it just wasn’t certain enough even for gamblers and looking to the left, at a snow shelf leading direct to the prominent rib that was a direct line to the summit, caught our vote. 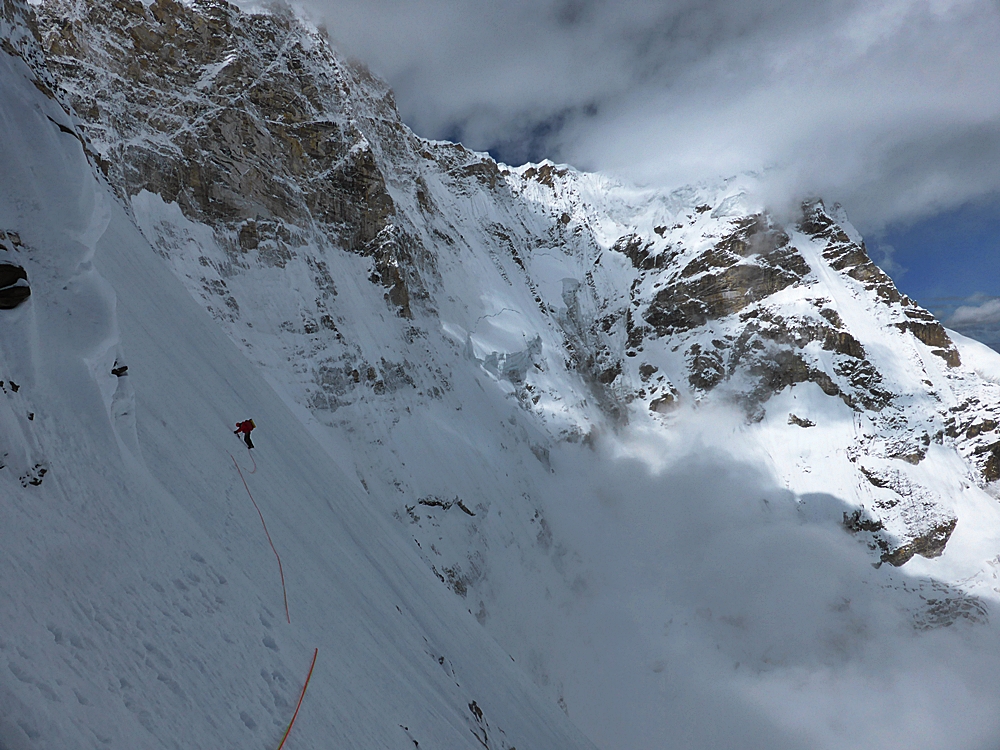 We finished early and dug a portion of fine snow arête which was enhanced by a cradle to catch the snow and enlarge the ledge even more. Paul happily pitched the tent enthusing the sowing skills of his Mother-in-Law, Di, who had constructed and sewn the sheet from which it was now was anchored by ice screws and supported extra snow to form a larger ledge. In the evening it started to snow, sleet, hail and gust, our sabbatical was over.
Day four felt a long one, we left our arête camp and pummelled all the way to 6700m and another ledge supported by the blue tarp constructed somewhere in Nottingham. The snow chucked at us what it could through the night. 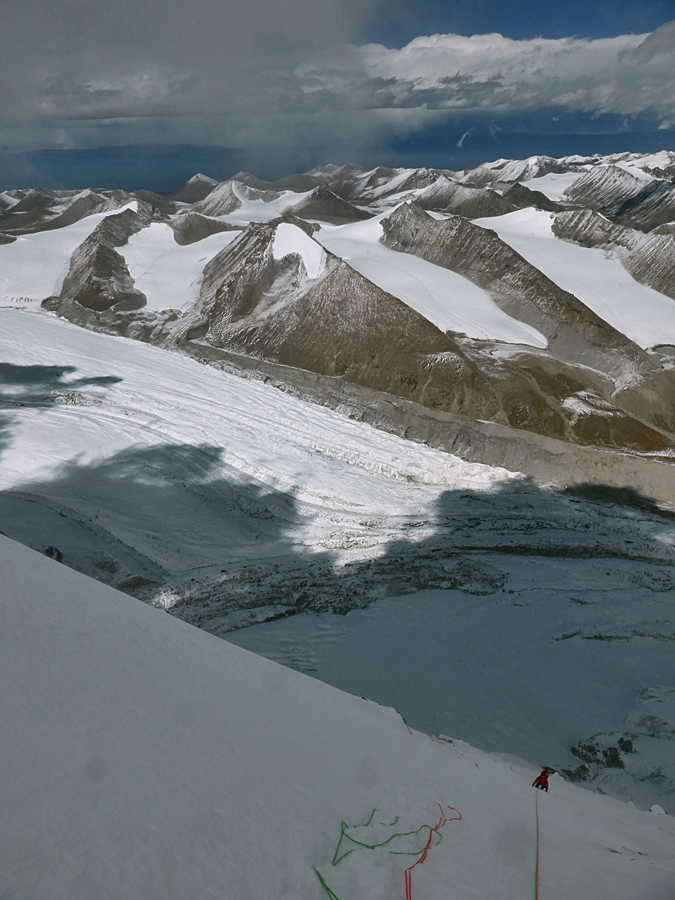 Day five. Day five. What can be said about day five other than it snowed, and then the sun shone before the wind picked up before both Paul and I stood on the summit at midday.
I will admit to being very happy. Paul was also happy. The weather wasn’t too bad and the idea to descend the line of the climb should bad weather hamper was not taken. Both Paul and I had checked out a traverse of the East Ridge and at its culmination a turn left to romp an innocuous looking snow slope back to ‘our’ valley and ‘our’ well know moraine and finally BC. 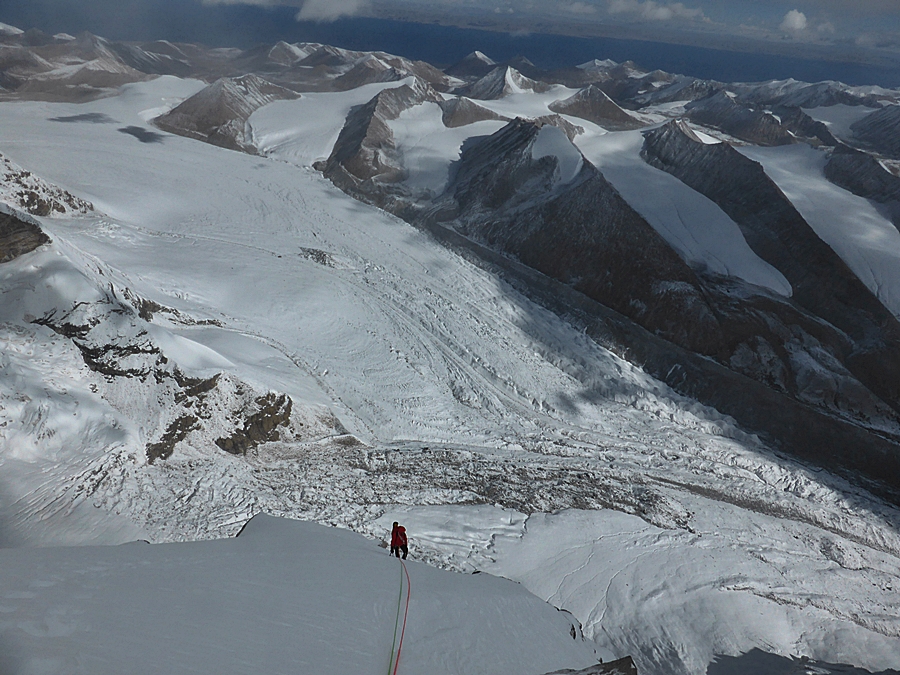 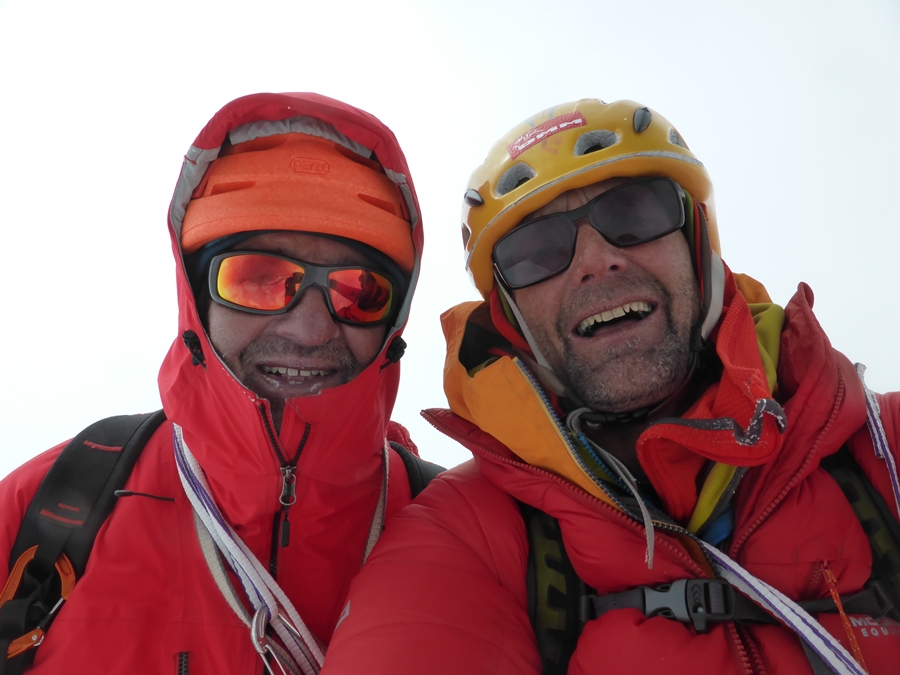 Setting off, almost immediately on cue, the clouds chose to wrap us in our dreams, but somehow, like a homing Pigeon, Paul led across ridges and down and around dubious snow-slopes stopping whenever the cloud turned pea-souper…
The cloud became even thicker, the snow whiter, the angle and territory more dangerous and after falling into three bergschrunds, we stopped and set up the tent in one of the holes found by Paul himself.

I wasn’t worried, we had summited and the weather wasn’t that bad. If only the cloud would bugger off tomorrow morning, the hidden gully-exit we needed to find, which would lead to the North Face and the traverse to a lower ridge and finally our snow slope to the moraine and safety, we would be OK.

Soon after dark it began to snow, and snow and snow some more. I lay, not sleeping at all, while admonishing myself for not forcing the issue and abseiling the line we had climbed. Now we were stuck somewhere teetering on a ridge above 6500m in a dump of snow with limited food and limited knowledge how to get off. What were we thinking? We had climbed the line, we had our prize, this was just the way off, it didn’t matter, it was a fucking way off, that’s all and it was going to kill us.
Day six, and it’s still snowing and white-out. We would have to stay put, but by 9am the winds abated, the snow stopped and we launched, well, we teetered and staggered. I couldn’t help but voice concerns about the amount of snow hat had fallen through the night but what were we to do, sit there and hope for some kind of none-avalanche terrain miracle? 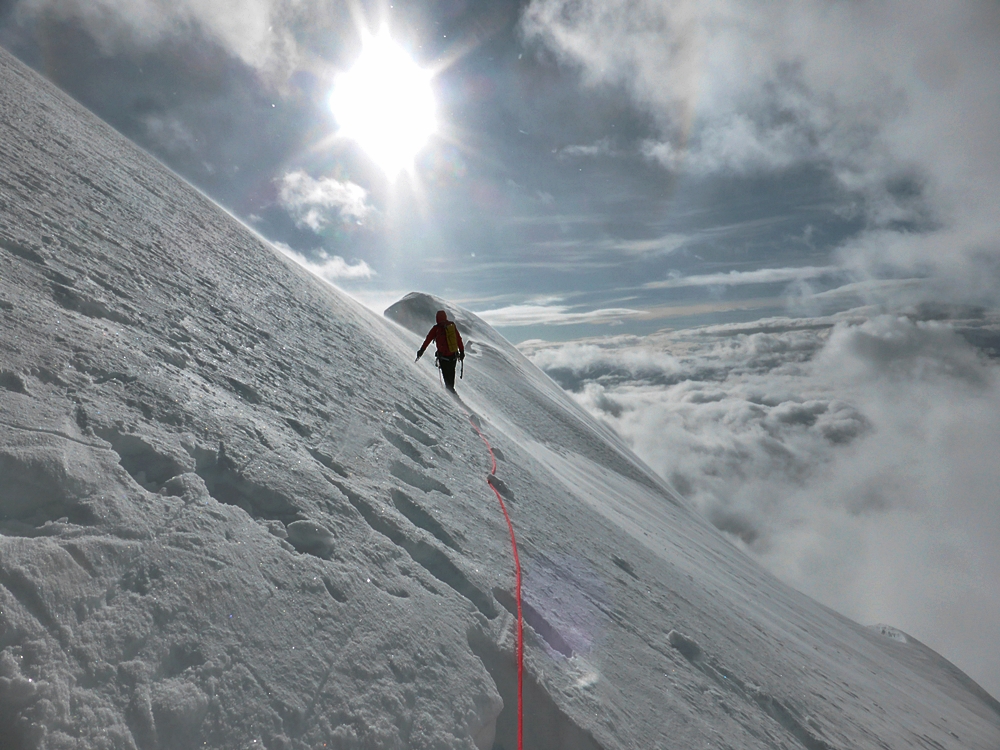 The Yorkshire homing Pigeon pulled a master stroke finding the exit gully leading from the upper ridge to the lower ridge via several abseils directly down the North Face. Paul’s ability to sniff out the line and cover technical ground was astounding, his years and years of Alpine climbing and the experience easy to see. Eventually, after covering several pockets of serious slab which chose to stay-put, we reached the lower ridge and after a few technical sections hit our turn left col, but the mess of glacial holes and lines and overhangs changed our plan, so instead we turned right into the south valley before stopping on flattening.

Day seven was a long arduous day following no path just a jumble of moraine and a river which after seven or eight hours popped us back into some form of reality near the village and house from which we started and the house where our Tibetan Liaison Officer was staying. 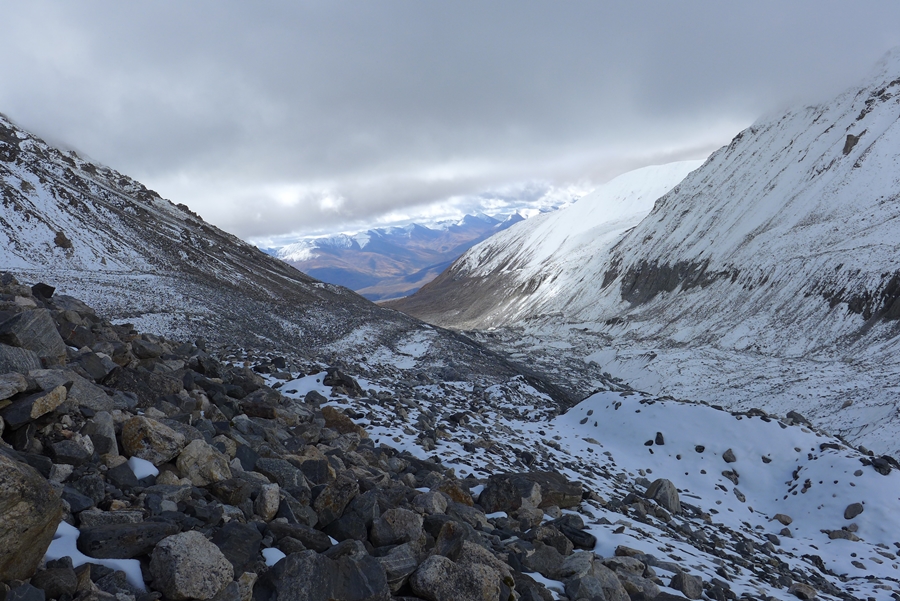 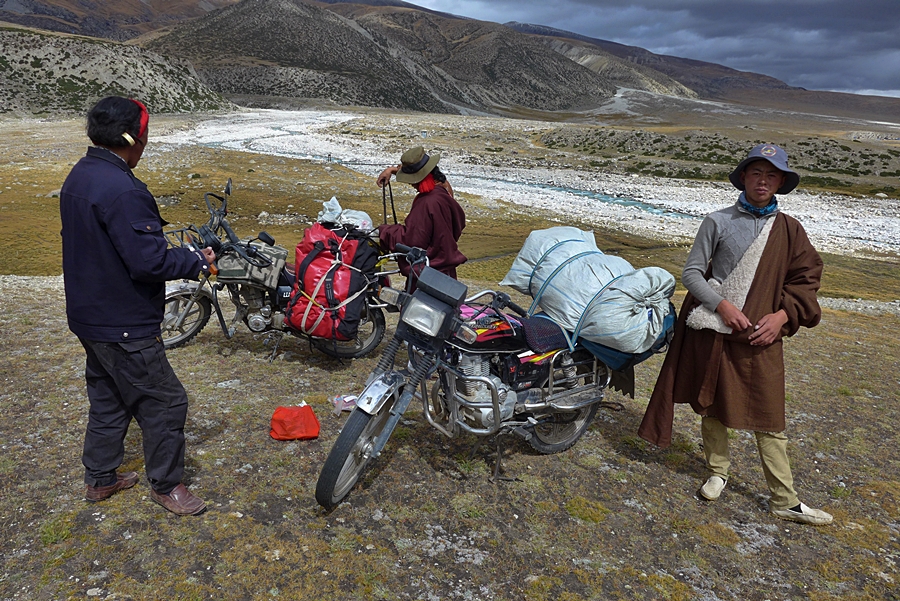 Paul went back in with a team of bikers to strip BC. Pic credit, Paul Ramsden. 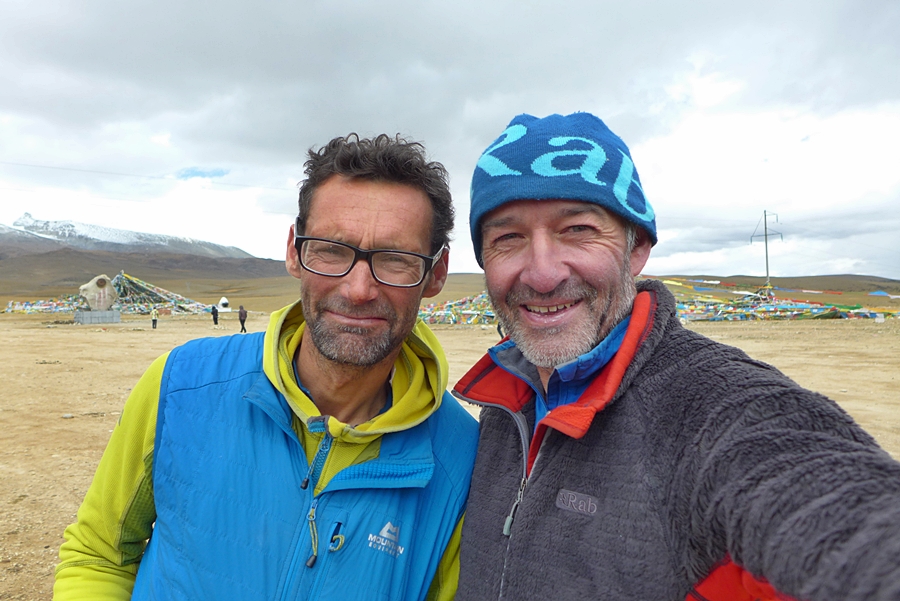 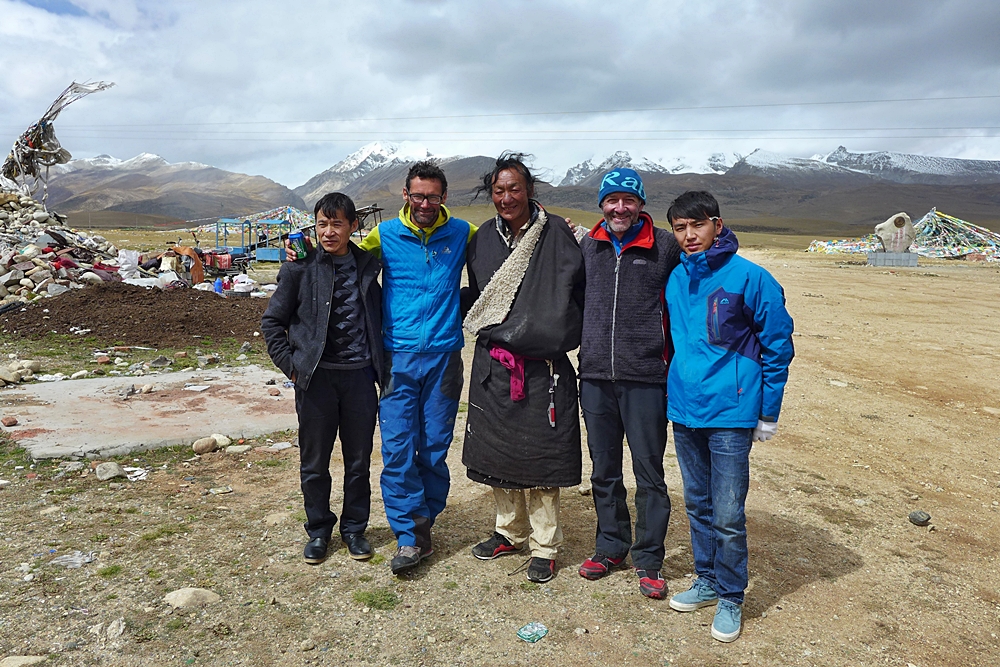 Tashi, the LO, me, the village headman who put us up in his home, Paul and drives… 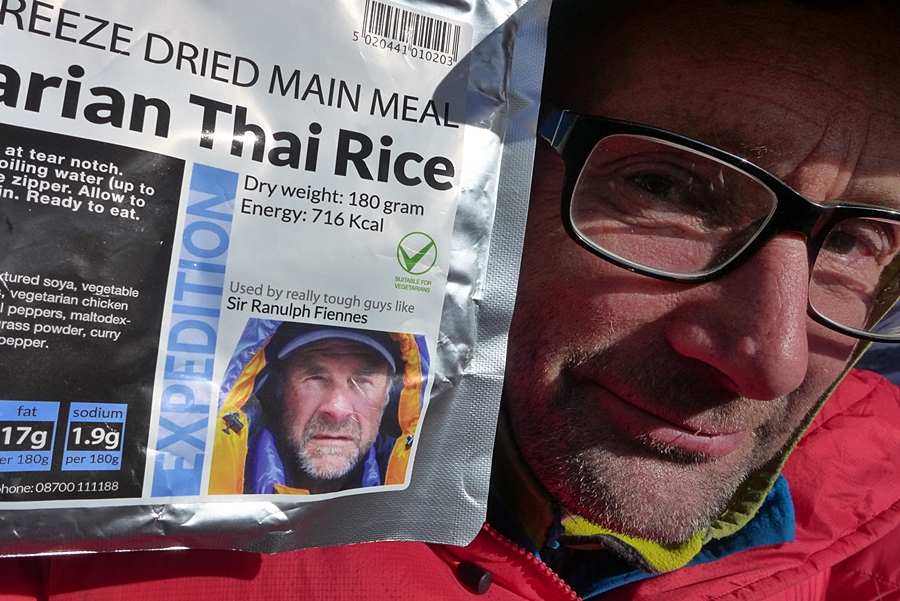 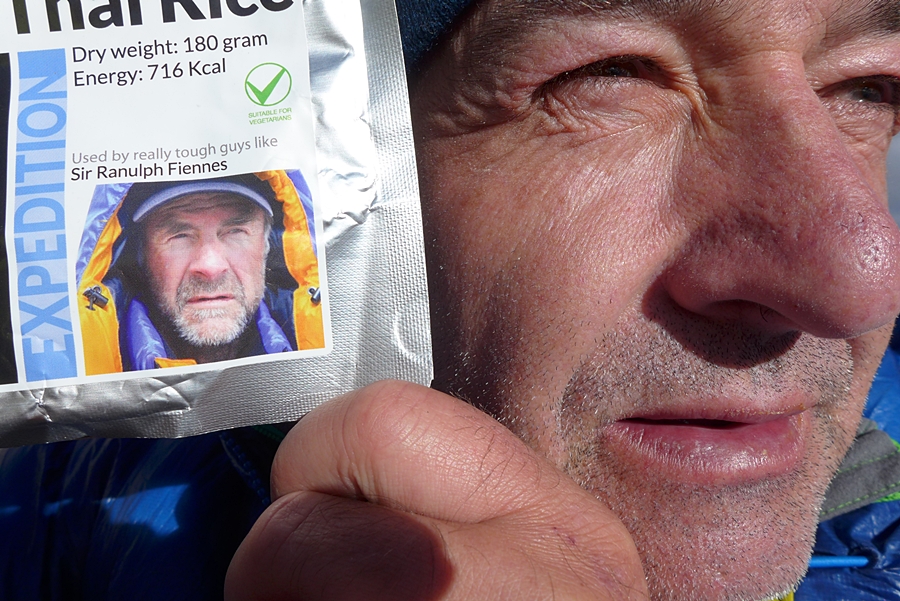 Paul Ramsden and I would like to thank the following in their helping this expedition exist through the form of grant monies.

I would like to thank Paul Ramsden for his imagination and drive and foresight and of course his ability to make brews given any circumstance. I would also, as ever like to thank my sponsors who are very supportive and help me continue to live the life I do.

15 Responses to Nyainqentangla South East via the North Buttress.