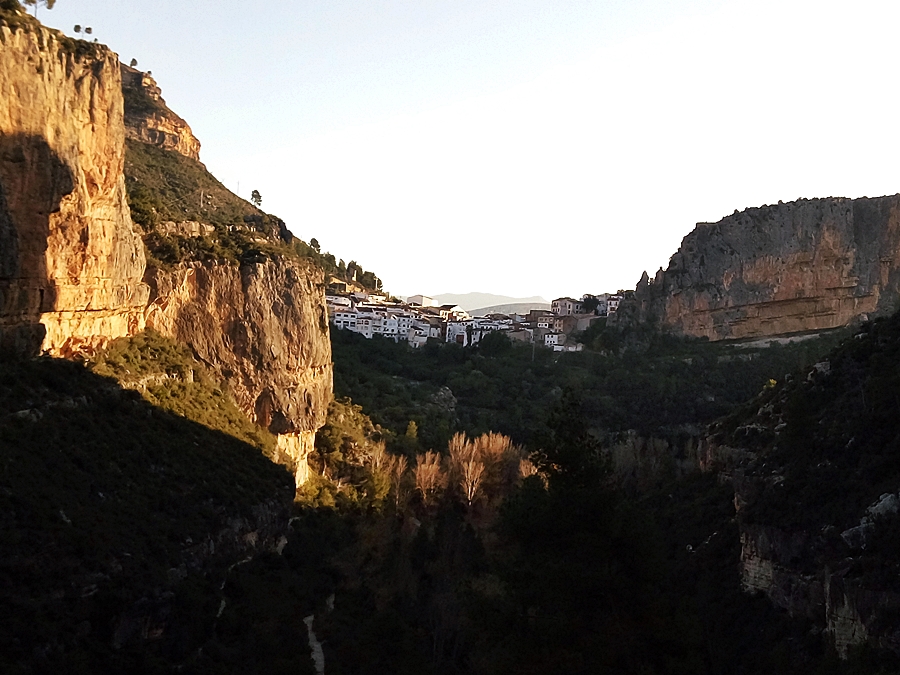 In the shadows cast by streetlights, Zylo and I walked the cobbled piazza in the centre of Chulilla. A wash of white confetti circles swirled, butting against stacks of metal chairs outside the shuttered cafes and piling against the stone of the font. We were leaving to catch an early plane after a month of climbing rock.

Steep and narrow streets. Three story houses. Cats and dogs and succulent cacti. Spider plants in ceramic pots creeping from deep window sills. And above the town, the dilapidated castle and its walls. Last night, as we dumped bags in the minty-green Fiat 500, the town had been lit by strings of light swinging in the breeze. Fiesta de Los Tres Reyes Mages, Spanish Epiphany – children, groups of adults, climbers wearing bright down jackets. Packs of dogs. A choir singing Silent Night. The chime of the church bells.

I was sad to leave. Deserted, dark, almost post-apocalyptic. It almost felt like we were steeling away in the middle of the night in an attempt to outrun something sinister. But maybe we were, because isn’t this what climbers do – we keep running, training, driving, flying, pulling, lowering, hanging, stressing, crimping. We try to eek-out every minute of every hour of every day of every week of every month of every year. We scream as we try so very hard and we scream when we fail. We run around ticking lists, comparing, thumping ropes at the base of the rock as we take our place.

Deserted. Silent. Illuminated by ornamental street lights. We walked, brushing confetti into cracks between cobbles before the breeze caught it once more stirring it to a whirligig of white circles. The chill of a January night in Spain.

The day before, our last day of climbing, we had climbed Sendero sinuoso, a three star 7a+ that weaves its glittering course of orange crozzles for forty metres. To the left of Sendero sinuoso was Animula vavula blandula, also a three-star climb, but a little more difficult at 7b. As I stood on a ledge half way up my climb, furiously shaking life into numb fingers, a man sprinted past and lowered, barely giving himself time to appreciate his success. For a second, while hanging and shaking out, I thought of saying hello and having a laugh at my ineptitude, but he didn’t look like he would appreciate the banter so I remained stum. The man didn’t appear to be enjoying himself, he didn’t smile once, maybe he had just received some bad news? Later, another climber in the same group, a big guy who smiled and laughed even though he had struggled and fallen on the same route, told me his friend was unsatisfied because he had not climbed any routes that challenged him, even though every day he climbed three star routes in this magnificent setting.

Later, as I stood belaying, two more people appeared to my left intent on climbing Animula vagula blandula. They looked around hawkishly before thumping their rope at the base of the route. One of them squatted as close as he could to the rock while flicking the pages of a small note book and writing. Occasionally he stopped from his study and lifted his head territorially. He reminded me of a raptor on a carcass.

Just before climbing the final route of the trip, Zylo and I hauled ourselves up the ladder of metal rungs until stood on the large dusty shelf beneath the orange tufa dripping overhang of El Balconcito. We had come for a look because until now neither of us had seen the wall up close. A month of great climbs in beautiful surroundings, a month of good food and wine and comfort and challenge, a month of play. And as I stood on this final day looking up I wanted more, I wanted to launch onto this wall with all of its unknows, all of its slim fins of fine grey porcelain and decorations of rough orange squares and its dark, cool pockets, and with this wanting, a judder of unsatisfied chilled me. I had climbed and climbed and battled and climbed and tested myself almost to the limit over the month and here I stood daring myself not to be satisfied …

… But the climbs I had climbed had been so good, so brain-twisting with their technicality, so fulfilling that every time I returned to the ground it felt as if I was still high. On occasion, on several occasions, I had struggled and tried and tried. What more can a person ask of themselves? While belaying and in between climbs, I had watched friendly groups of Alpine Accentors with their pristine and pippety blue-grey plumage walking and pecking almost at my feet. We had stood on the wooden bridge looking down on the large brown fish, its broad body and fan-tail swishing against the flow of in spate water while its head remained blindly snurfling in mud unaware of us looking down from above. The early morning cormorant sleek and swimming underwater in the river narrows at the bottom of the canyon. The black and white blur of the Greater Spotted Woodpecker rattling its brain while digging deep into the soft wood of the yellow poplar. A tiny Firecrest. Gangs of choughs mobbing the cliffs above the climbs and tossing sticks on the climbers below. I had made friends of the village cats and fussed a million dogs. I had met old friends and friendly new people, and on Christmas day, after working myself on Kataplof, a wild and crazy 40m 7c, Zylo and I sat on a large orange boulder, sharing a river-chilled beer and enjoying the calm as the day cooled. Jupiter appeared first of all, bright in the darkening blue. I was a year older and another year was almost done…

Reaching the steps on the far side of the square, a wake of paper spindrift washes against the concrete of the first step. Time moves one way only and chaos will ensue. But there is rhythm amongst this chaos, amongst these turbulent tides, if we can only allow ourselves happiness. 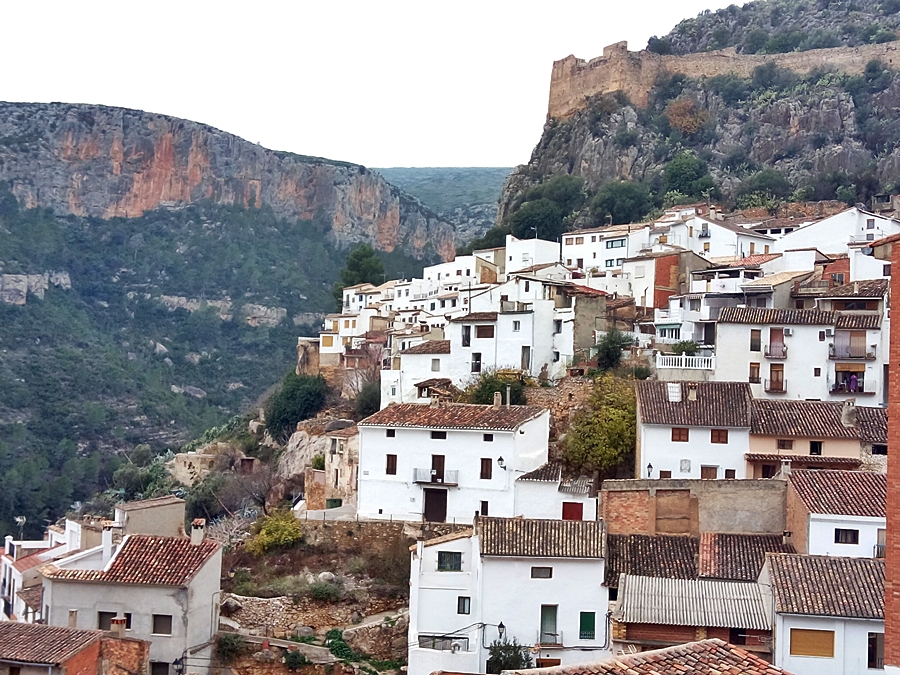 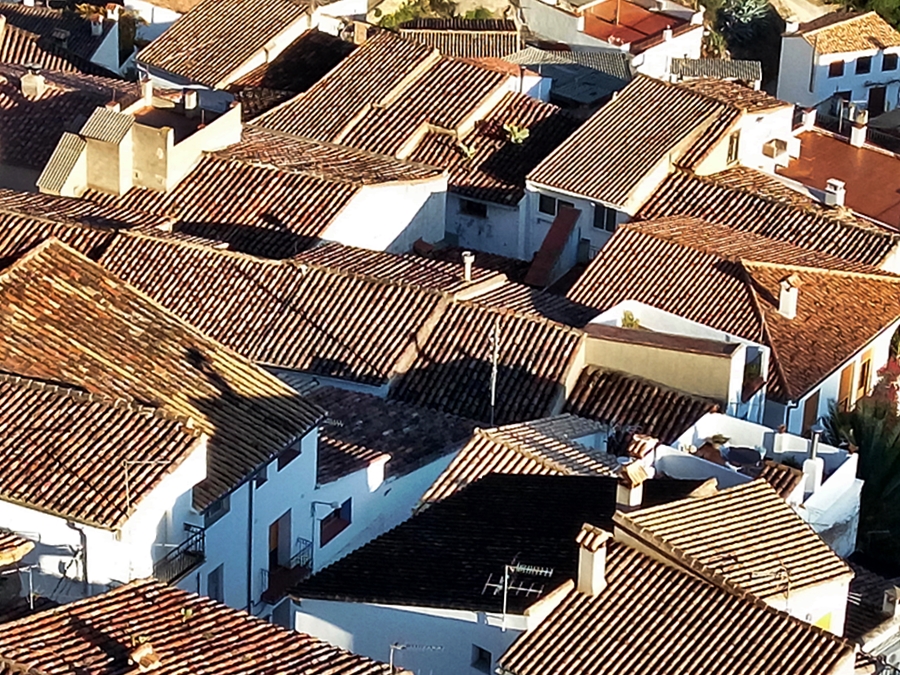 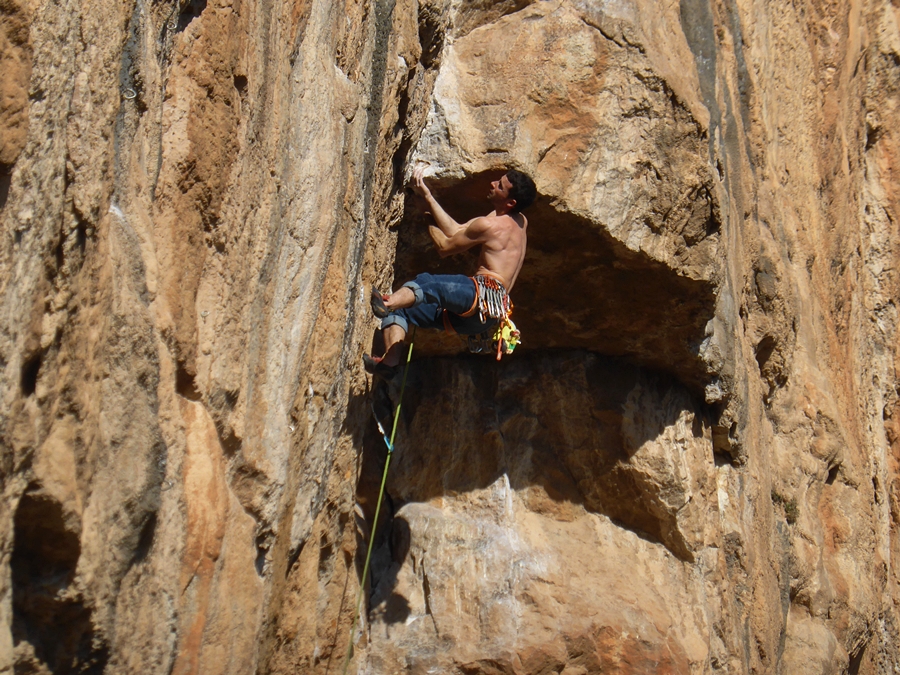 Unknown climber passing the final roof of the brilliant 35m, 7c Los Franceses. This is the point the climb turns from an E4 into 7c! 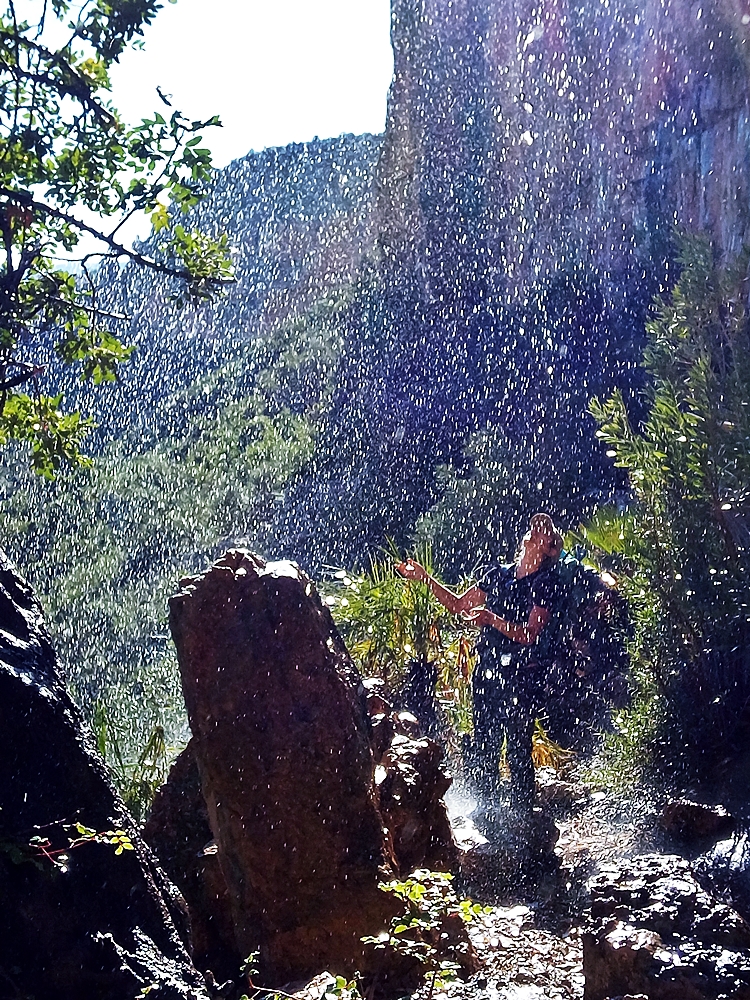 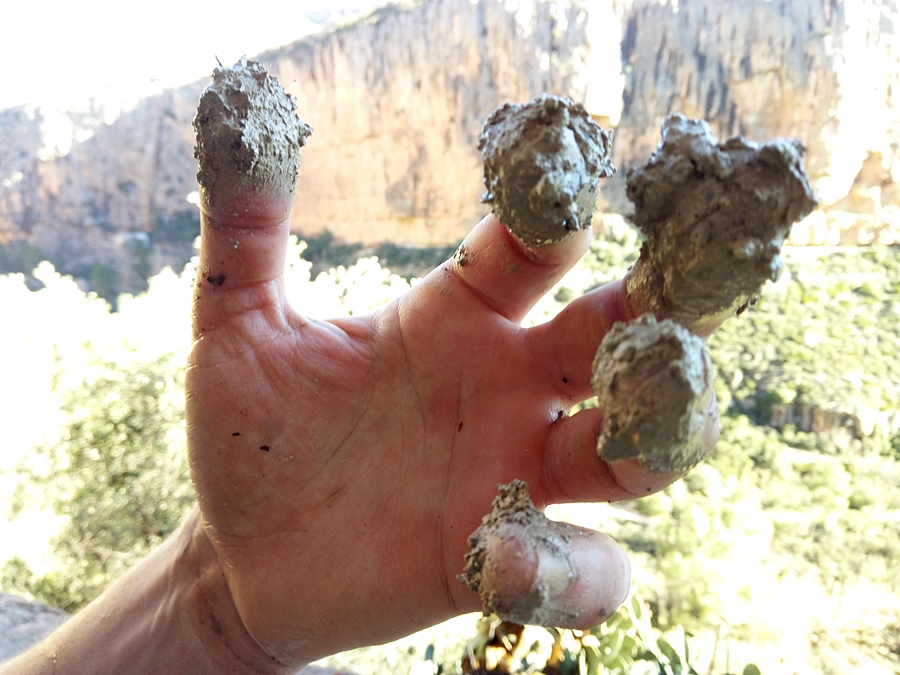 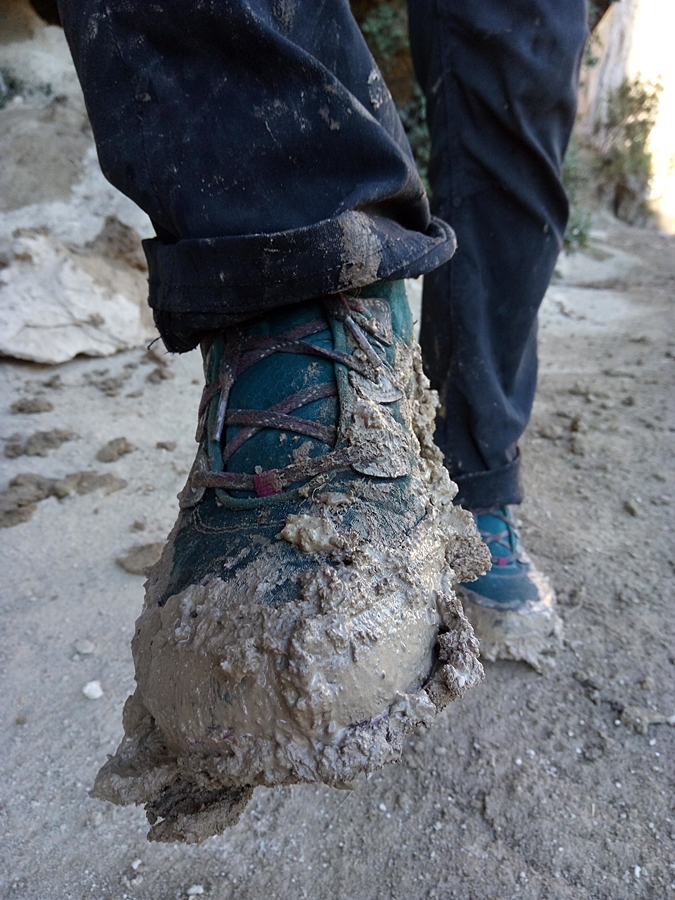 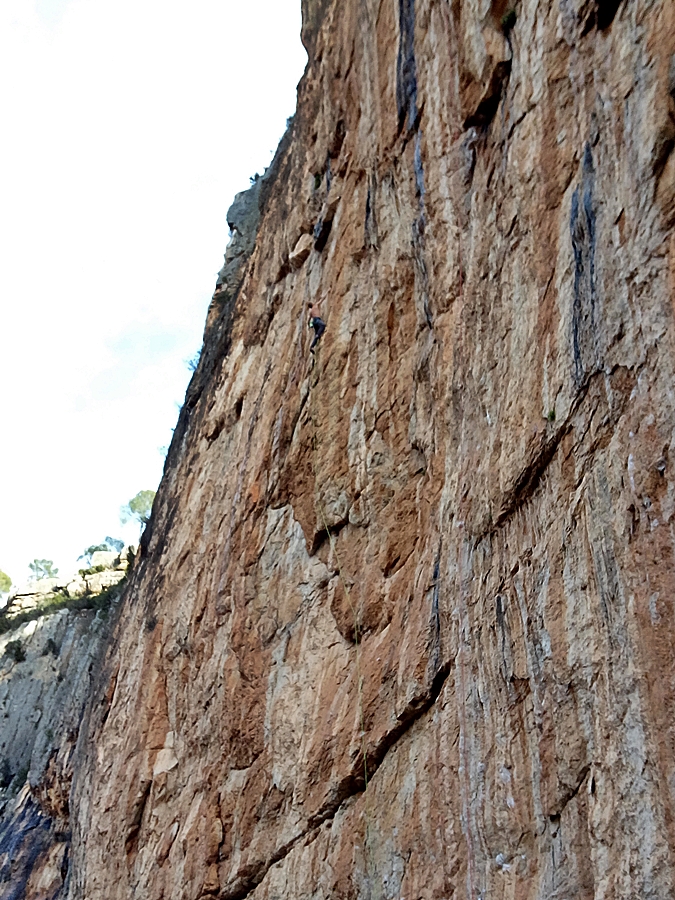 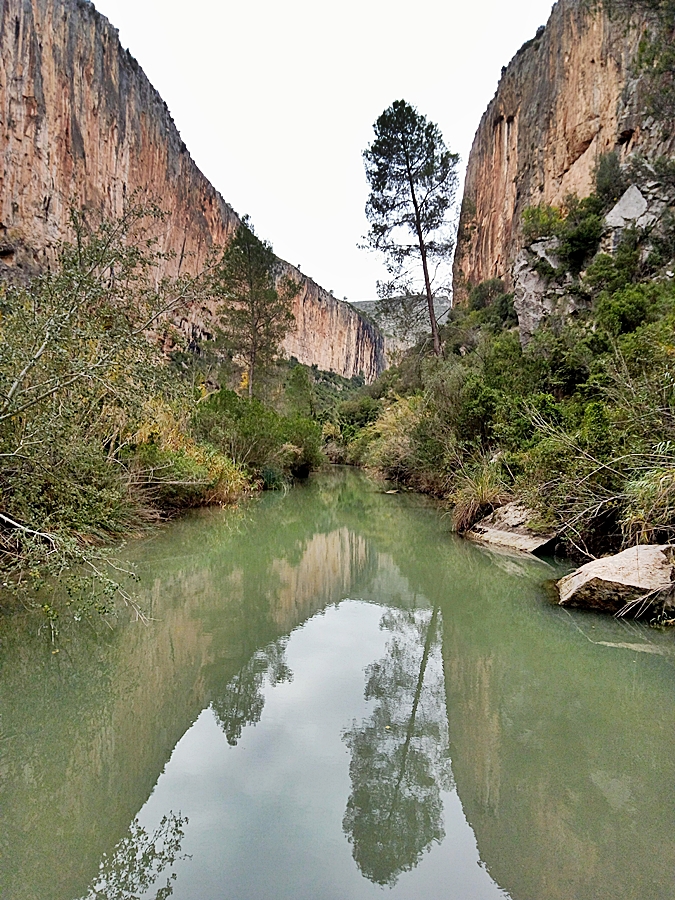 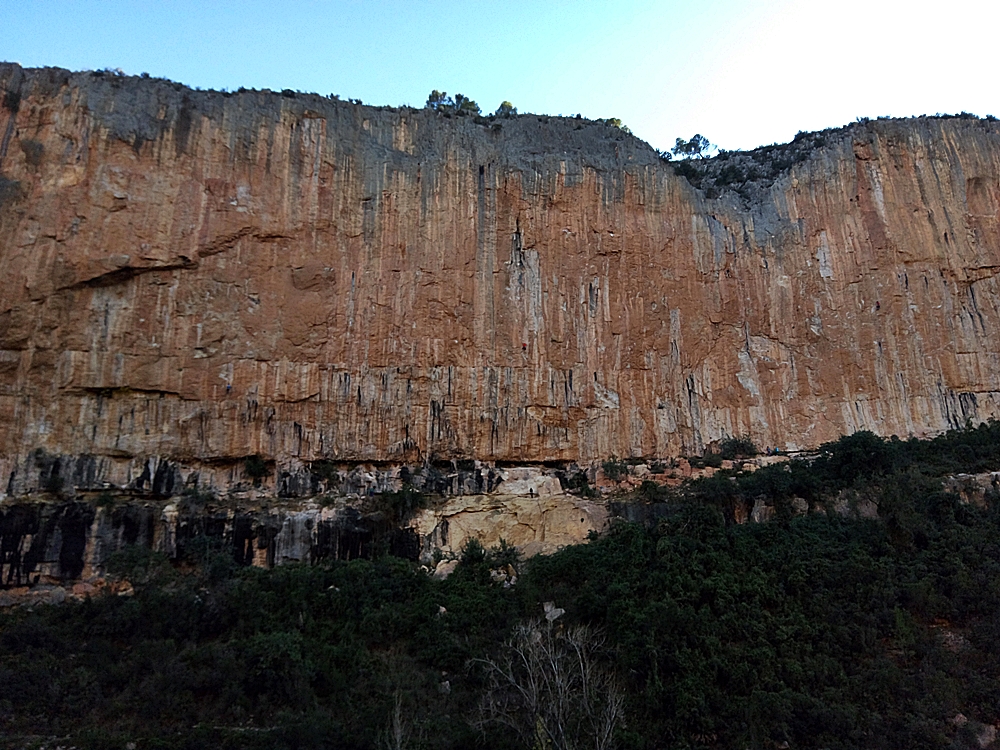 Unknown climber from the USA fighting a few wet holds on Tequila Sunrise. 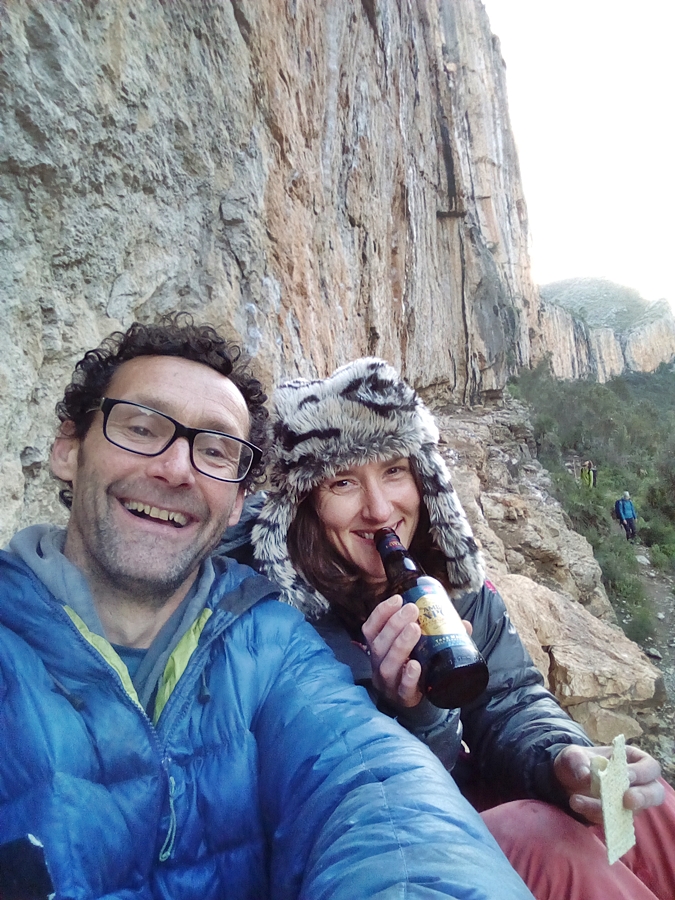 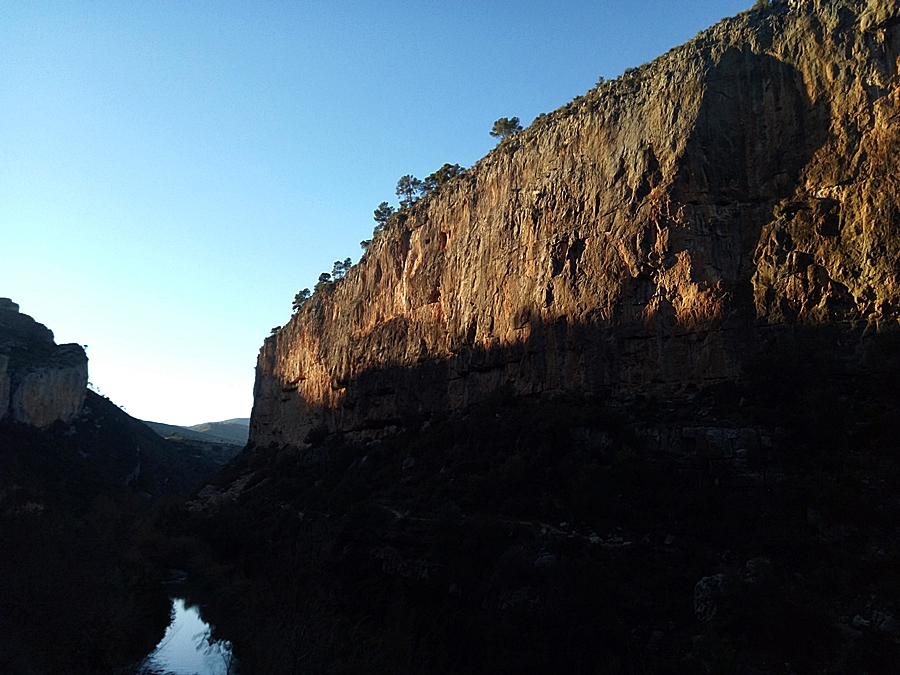 The end of another great and memorable day.