Breadgate. Fable for another time. 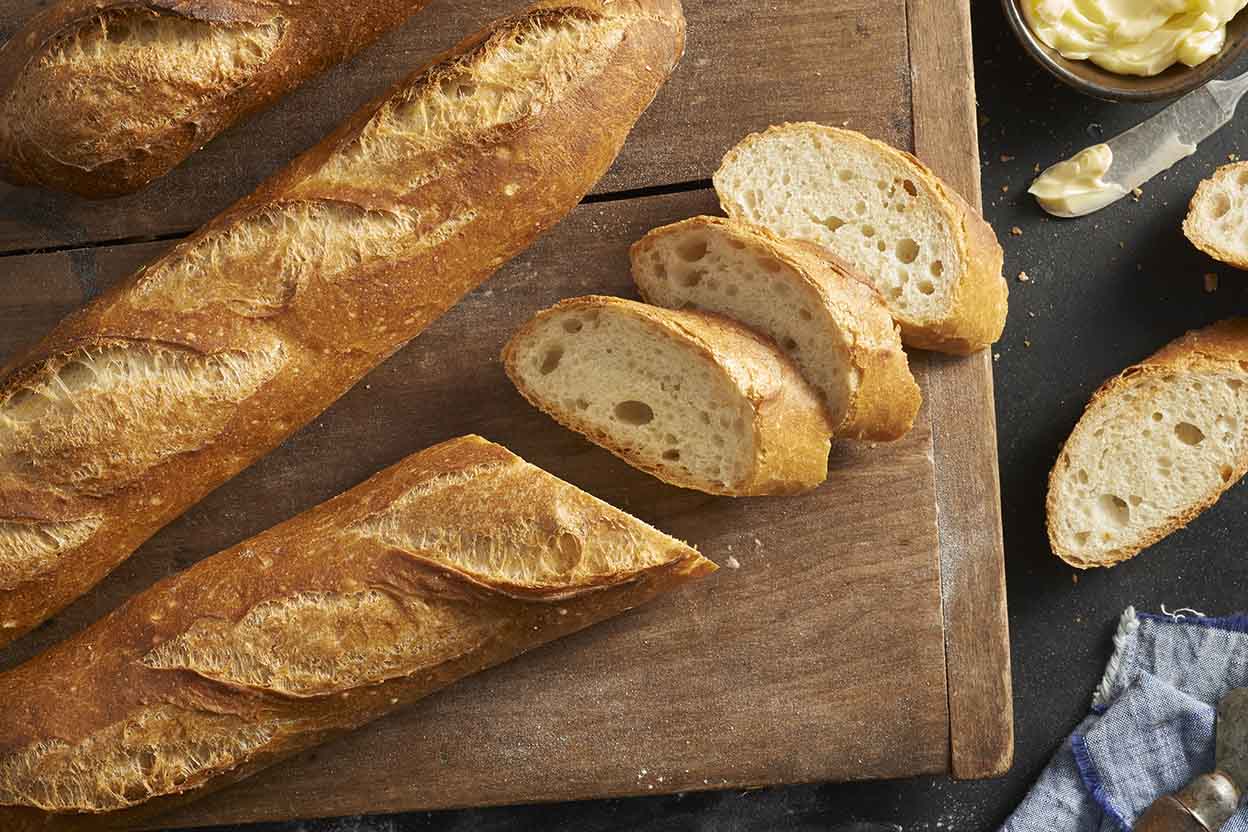 In April, 2005, Tim Neil, Dougal Tavener, Jonny Garside and I travelled to the Gorges du Tarn. This was the first time any of us had been to the Tarn. I remember the four of us packed into the small hire car and entering Les Vignes, the village where the camp site was, and already I was in awe of this quiet and beautiful place. Steep, pocketed and orange limestone reared from both sides of the road. Large bulbous pillars towered above pine and spruce, the gorge felt almost fairy-tale. And the blue of the river cutting the base of the gorge was radiant. 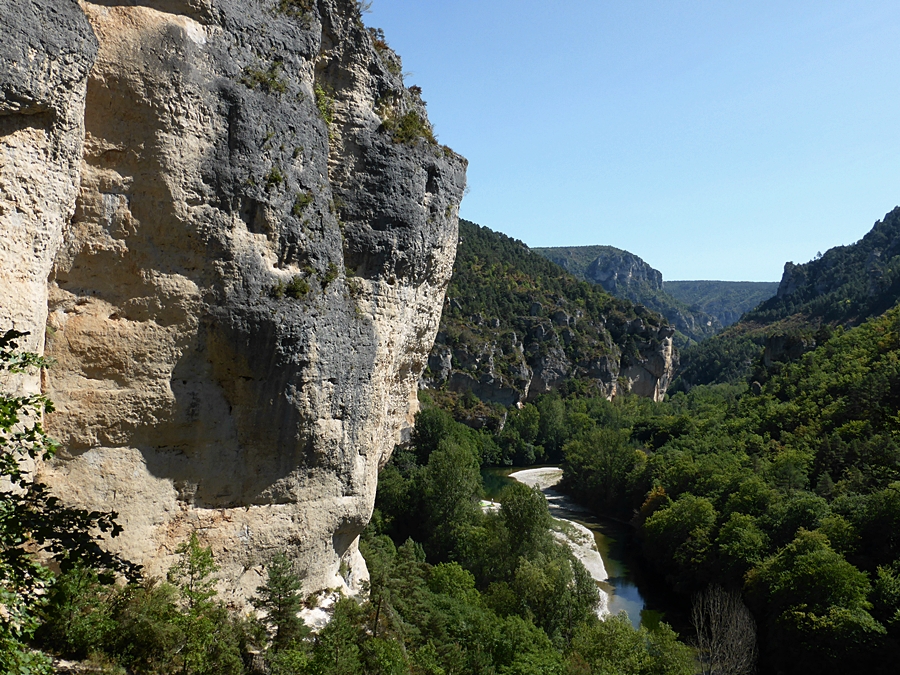 I had known Tim for years, but I hadn’t known Dougal or Jonny for long. Dougal was on the Assistant Instructor scheme at Plas y Brenin, as Jonny had been at one time, but he was now working for the BMC. Dougal was extremely gifted at most things, he had been the British junior white-water kayak champion, and even though he had only been climbing for a few years, he was already knocking off some routes with a reputation. Jonny was talented also, but talented in a reserved way, and unlike Dougal, who was blond and angular, and had what my Mum would have described as dashing good looks, Jonny was dark and calculating and a little predatory – less dashing, more hawkish and flittery, missing nothing. I found out that Jonny’s nickname was Birdy, a name that suited him well. I also discovered Jonny had a penchant for packing his day time snacks in a selection of different sized Tupperware boxes. Jonny liked Tupperware! I was soon to find out Jonny had another love alongside that of Tupperware,and that was one of being irritating and argumentative and Jonny took to what was soon to be known as Bullock baiting with a passion. If there had been a championship for the sport of baiting a Bullock, for it was most certainly sport to Jonny, he would have won gold. His nickname took on new meaning, as he now resembled a Peregrine pecking and pulling at a pigeon, and I was pigeon! 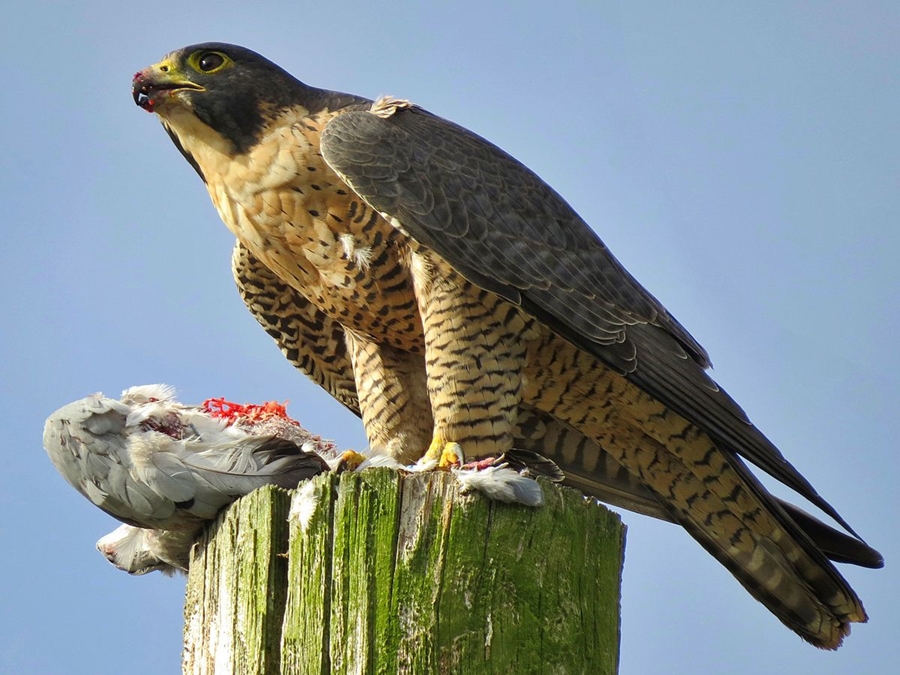 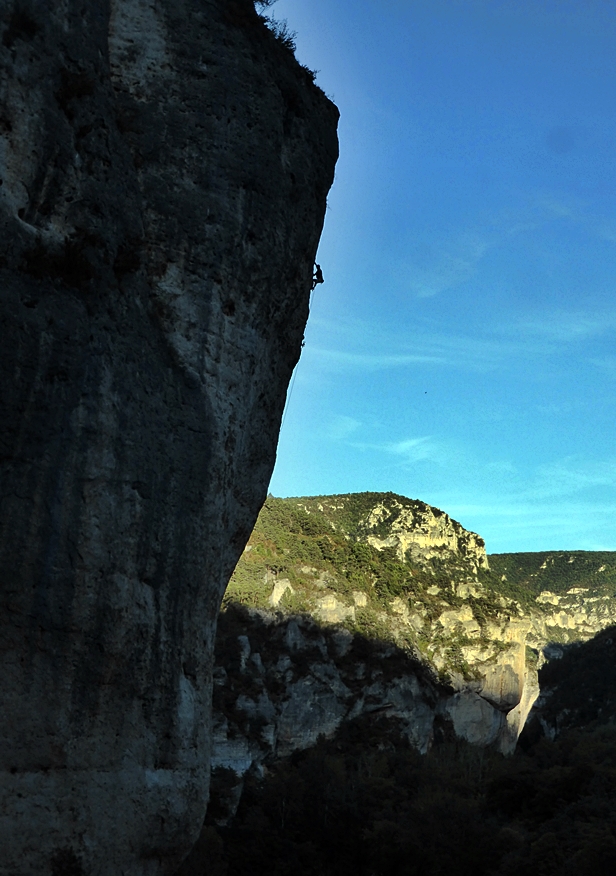 I returned again to the Tarn the following year. I loved the place – the river, the vultures, the Jays with their shock of blue and screech, the friendly local people and the style of climbing. Long run-out pitches, with pockets of various depths, which generally meandered up a vertical, or more often, overhanging sheet of perfect orange. That first trip with Tim and Dougal and Jonny had only been my second ever sport climbing trip. I really enjoyed the climbing and the physicality, but at that time, especially coming out of winter, I only really looked on these trips as a way to get fit for the summer trad climbing in Wales. But it was on my second trip with Phil Dowthwaite, when I was walking along the road, looking up at the massive cutaway in the seventy to one hundred metre walls of Dé Qué fas Aqui, that I stood fixated. There was a climber who was continuing on his climb after what looked like he had already reached the lower-off, and continue he did, almost topping out in one huge, almost inconceivably long, single pitch. He was so high he must have needed oxygen. Do they make ropes that long, surely not! But they must because I could not see a join. Just before he stepped onto the top of the crag he fell and my, did he fall. And as he fell he screamed. At first he screamed in terror. Then his scream lightened with joy. Then the rage took hold, before finally, he sobbed. And when he eventually stopped falling, he let out a loud and machine gun like list of expletives that I didn’t understand as it was all in French. I remember thinking how the hell does a person become so fit to even contemplate climbing a pitch so long, and later, when I found out the grade of the climb was 8a, my fascination turned to a complete lack of comprehension. 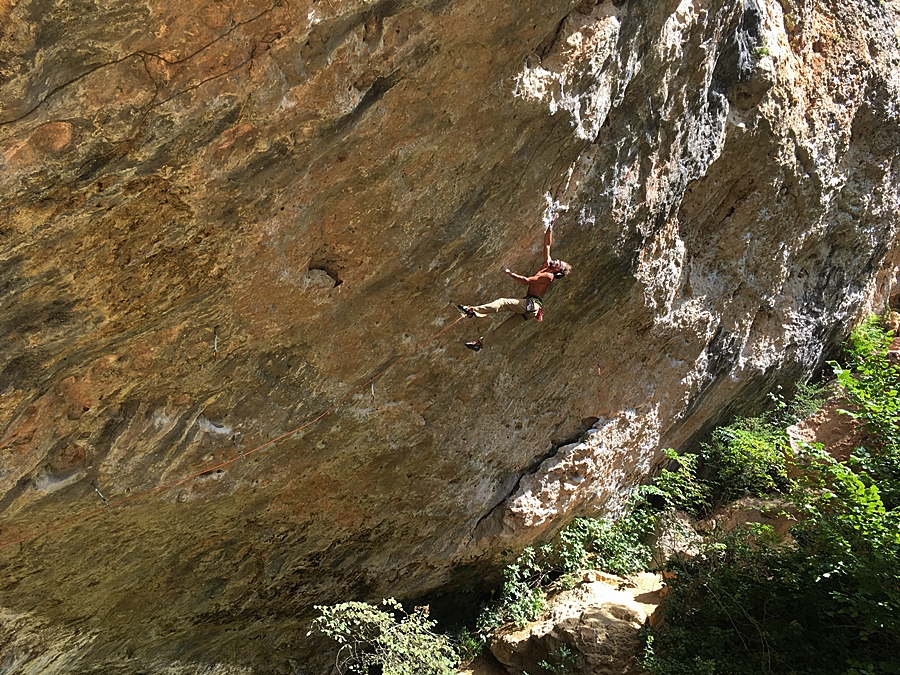 One of the Locals almost latching the hold on Dessèchement Planétaire, the 8c in L’ Oasif. Pic Rich Kirby.

On that first trip, Tim, Dougal, Jonny and I improved as the days past – getting fitter, understanding how to use pockets and how to get to grip with the run-outs, which on some climbs were dramatic. Dougal soon became the front runner, but annoyingly, it turned out Jonny was a great climber, he not only had good technique, he was also bold, taking repeated whippers, although I must admit the tiny shorts he wore were embarrassing for everyone apart from Jonny. Tim was solid and I did my usual, using strength and fitness as my ally, fighting my way, and on occasion even reaching the chains. It’s fair to say, I was more suited to the lines that were long and ‘trad like’. Big corners and faults that soared into the sky with overhangs that could be skirted by underclinging, by-passing the steepness. Knees, elbows, back, thighs, push as much onto the rock as possible, that was my style. There was one climb in particular that fitted this bill, it was called Féerie pour une autre fois, Fable for another Time, a thirty five metre 7a+ with a Tremadoc style groove, surmounted by fingerlocking while trusting the feet to smears. Layback. Thrutch. Udge. After the crux there was a run-out overlap that traversed by underclinging with the feet pushed to smears, until at last the chains were reached. I was attracted to this line like slobber to a bulldog’s jowl. Unfortunately, like slobber is prone, I stretched and snapped and fell from the traverse, much to the amusement of everyone below. What a brilliant climb. I got it second go, but only just, flapping, and screaming and blowing. My arms were so full of blood, if someone had pricked them, the walls would have splattered red. Féerie pour une autre fois was the start of the seventy metre 8a I would stand and watch the French climber fall from the following year.

Tim, Dougal, Jonny and my trip continued with the tension hitting a high point at about the day five mark. For many years, ever since being a PE Instructor and training for most of the day, I eat very little after breakfast, training on a full stomach never appealed. I have taken this habit of not eating through the day, on into my climbing life, but there comes a point in the evening when I really need to eat. It was on this trip that Tim pointed out to me how not eating in the day effected my mood later in the evening. At the time, I could not see it, but with hindsight, he was correct. I’m also what some people may call a ‘bready person’ I love bread of most types and eat bread with almost every meal. Bread is a very important thing in my life! Our trip was early in the holiday season and the little shop in Les Vignes only opened in the morning, and each morning Tim would take it on himself to get up and walk to the shop to do the bread run. On his return, we would all eat breakfast.  I would not make sandwiches for later in the day because I didn’t eat through the day. Jonny, I noticed, always made a big sandwich, almost using a whole baguette, before packing it very carefully in his Tupperware.

When we returned to the camp site in the evening the shop was closed, and more often than not there would only be a small amount of bread left. At this point I was very hungry, but I believe in delayed gratification where food is concerned, I’ve never been one to wolf down whatever in a quick fix before preparing my tea. Needless to say, years down the line I can see this is my thing, this is my shit, not everyone is the same, and on this occasion Jonny was not the same! But to be honest, I’m sure neither was Tim or Dougal, but neither Tim nor Dougal had taken so well to Bullock baiting so if they were eating bread I chose not to notice. For days, I had watched our last remaining bread be guzzled by a Birdy without, what in my mind, any consideration to me and the fact I did not make a sandwich. In my mind, I was due some bread, if not all of the bread reserves. I snapped at about day five! “Fucksake Jonny, leave me some bread, you’ve had your share.” It would be at this point that most people would have read the warning signs and acted appropriate, they possible would have thought, ‘Here is a very hungry and annoyed Bullock, he is close to snapping, maybe I need to back away from the mike… But not Jonny, this was not Jonny’s style, he could now see this was the time, because this time would have the best effect and cause me the most upset. “The bread is bought for all of us Nick, its team bread,” he said in a really annoyingly sanctimonious way, and continued, “If you don’t want to make a sandwich or choose to wait until you’ve made your dinner before wanting any bread that’s your choice, if it runs-out before you want any that’s your problem.”

Tim is six foot seven and on this day it was a good thing, he manoeuvred quick and pinned me down. Eventually, Tim calmed the situation by promising each morning to buy an extra baguette, which would be my very own baguette, and eaten when I liked.

I have now visited the Tarn seven times, it’s my favourite sport climbing destination and over the years a few things have changed. I don’t consider sport climbing as training for trad climbing any more. I now favour the more ‘sporty’ types of climbs and less, the trad thutchfests. I don’t go out to break myself by climbing as many routes as possibly on a trip or even in one day. I try not to climb all day long and in the direct sun light. I don’t run on rest days, I rest on rest days. I’ve discovered Hydration is good, but over half a bottle of wine the night before redpoint attempts is too much hydration. Belay glasses look weird but for 70m routes they’re a must. And Jonny and me are very good friends who laugh about Breadgate almost every time we meet.

I stood all those years ago watching in disbelief as the French climber reached the chains on the 7a+ section of what I remembered to be a really pumpy route and then continue to climb until he eventually fell. A few days ago, I’m still not sure how, I managed to successfully climb Féerie pour une autre fois Extension, the 70m 8a. Some things have certainly changed, but one thing hasn’t, I still love bread. 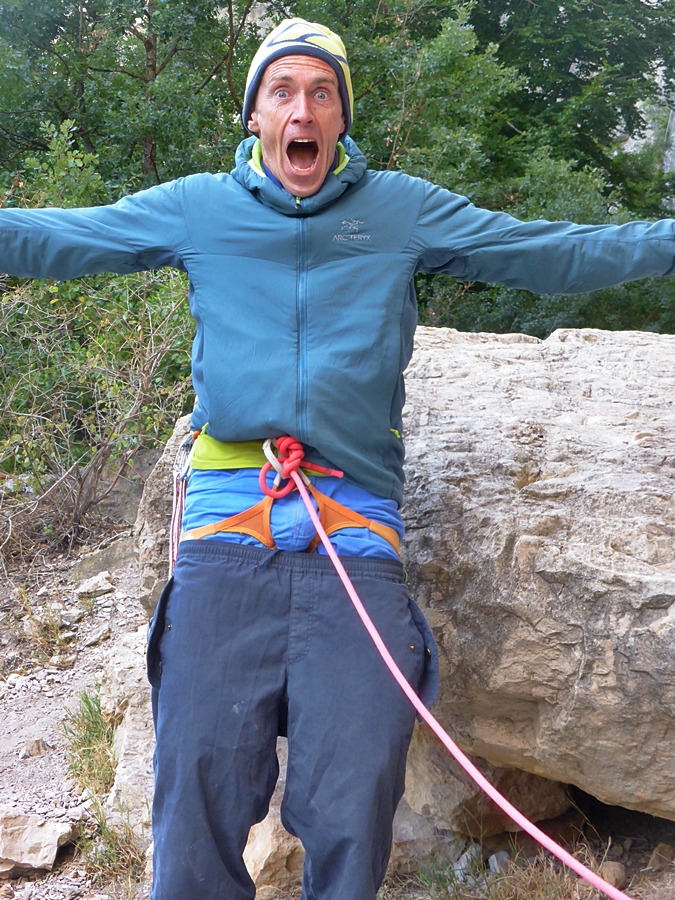 Rich Kirby psyching up before the big ascent! 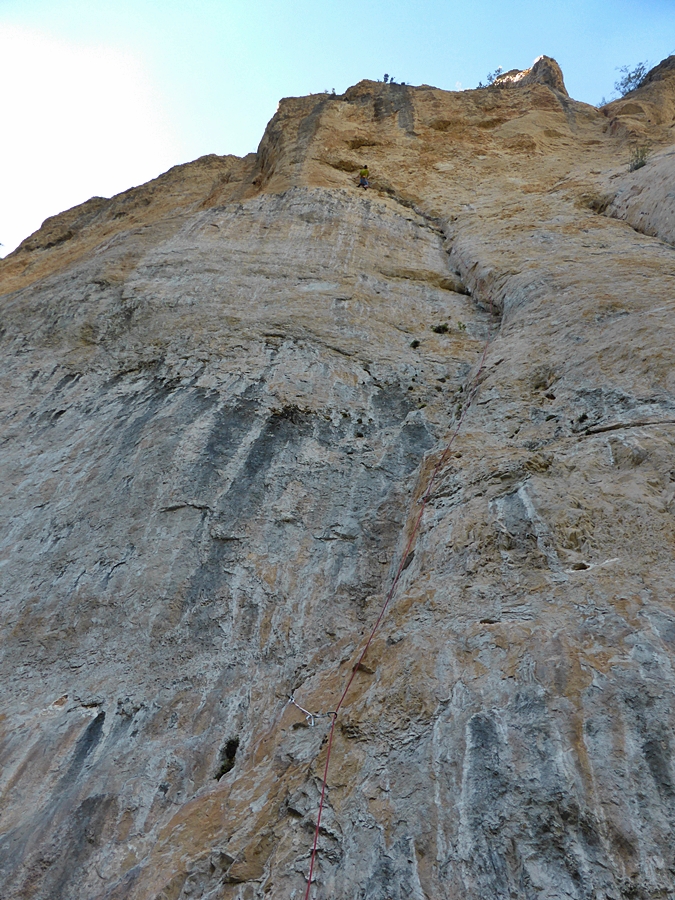 Rich having climbed the first 35m and about to embark on the second 35m. 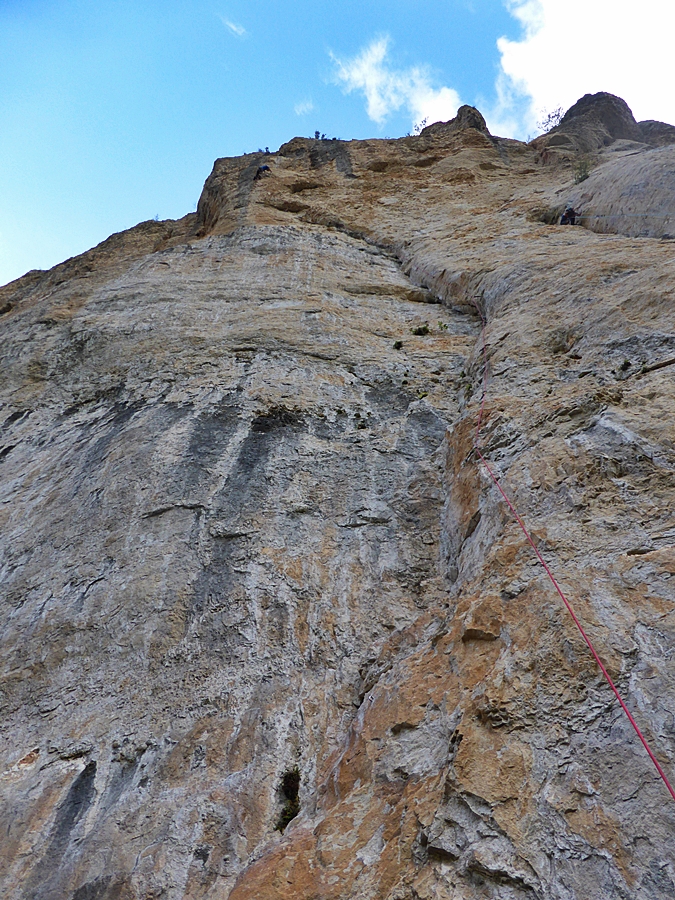 Myself on the ‘rest’ just before starting the crux sequence at the 50m mark. 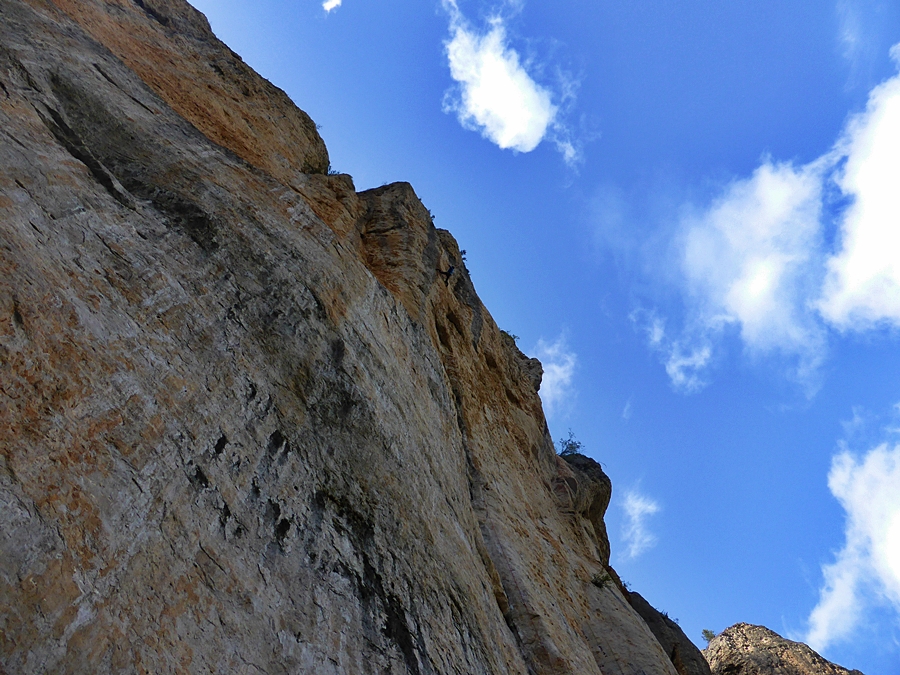 Myself setting off before falling once again from the crux! 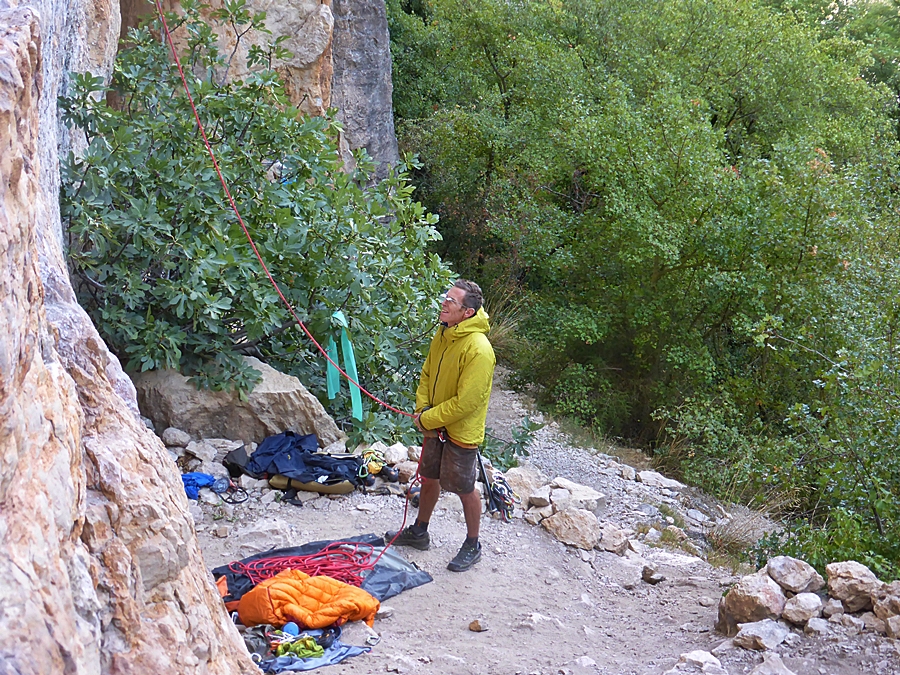 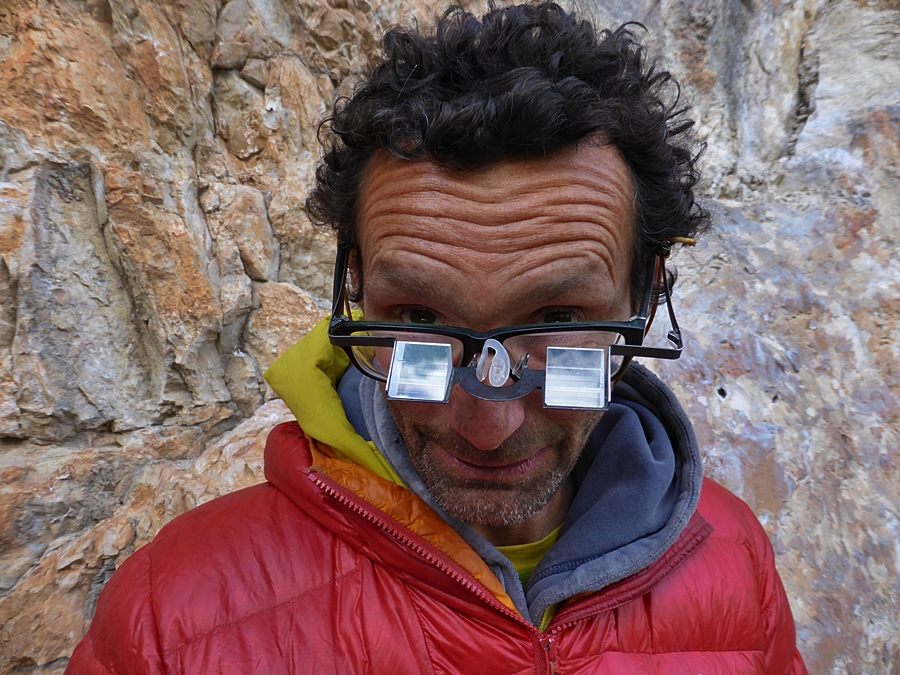 Belay glasses a must for what at times were up to 2hr belay sessions. 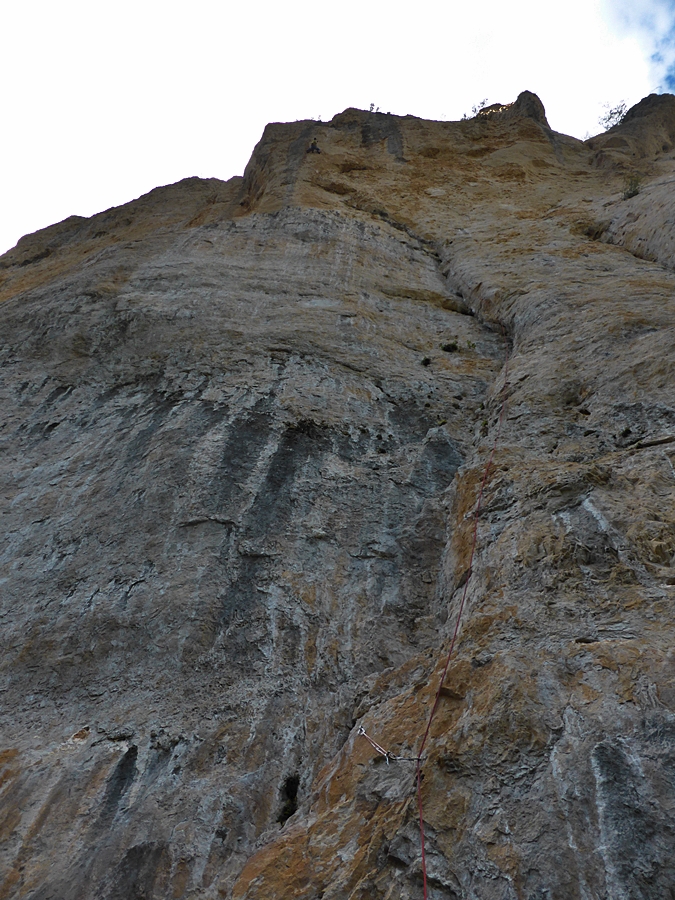 Rich also on the hangout just before the crux. “It’ll be fine Nick, you’ll never fall off the move after latching that pocket.” It was a close one though hey Rich? 😉 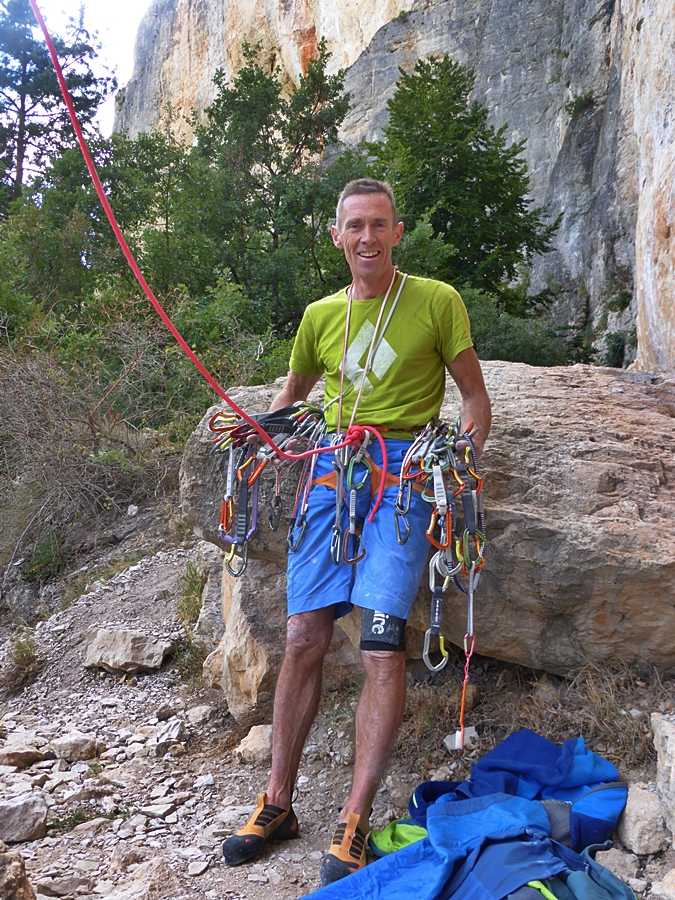 A happy man with a pile of stripped gear. It took us so long to climb this route clean, it’s a wonder the gear hadn’t rusted! 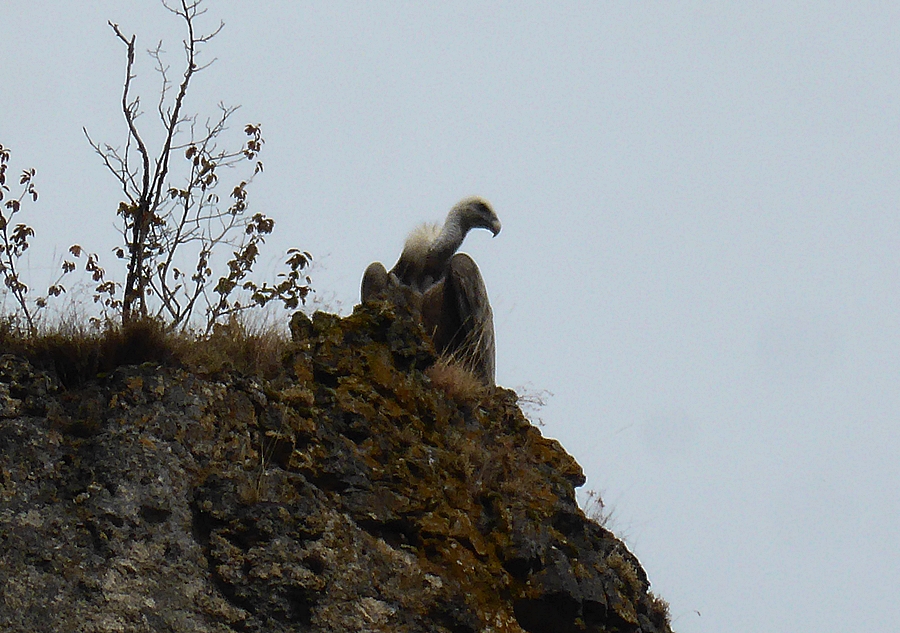 And the vultures looked on hoping for another failure.

2 Responses to Breadgate. Fable for another time.