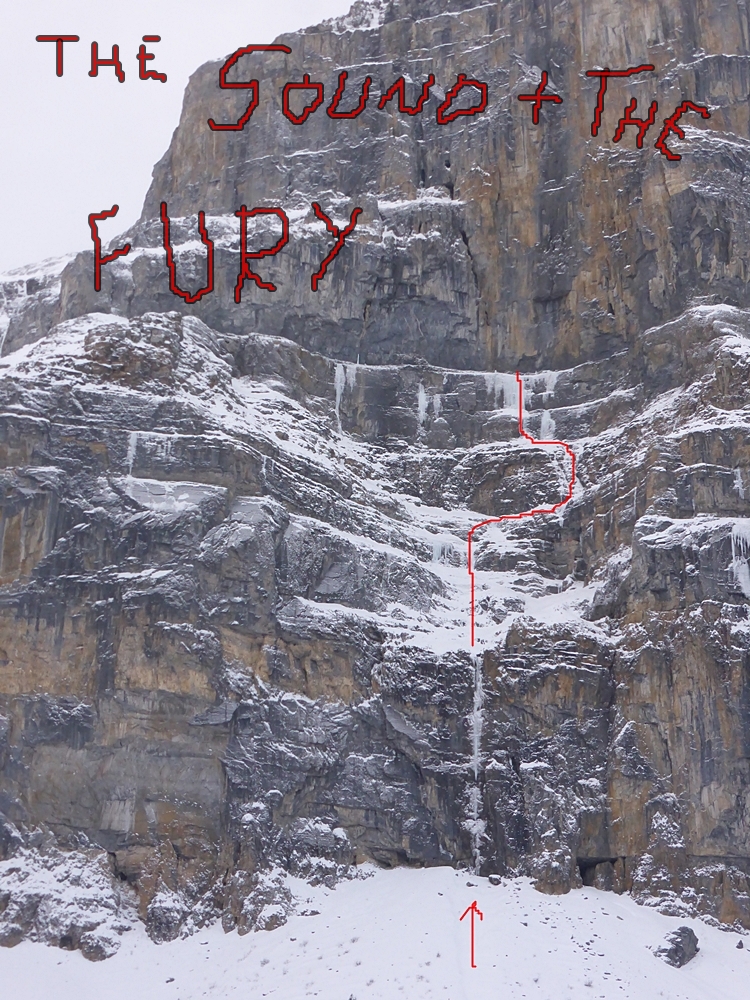 The Sound and the Fury takes the two pitch ice streak on the lower wall. Love is a Battlefield finish takes the ramble and 30m WI5 above. My suggestion to parties is climb the excellent streak and don’t bother with completing the ‘difficulties’ above, the climb for me is most certainly the first two pitches. 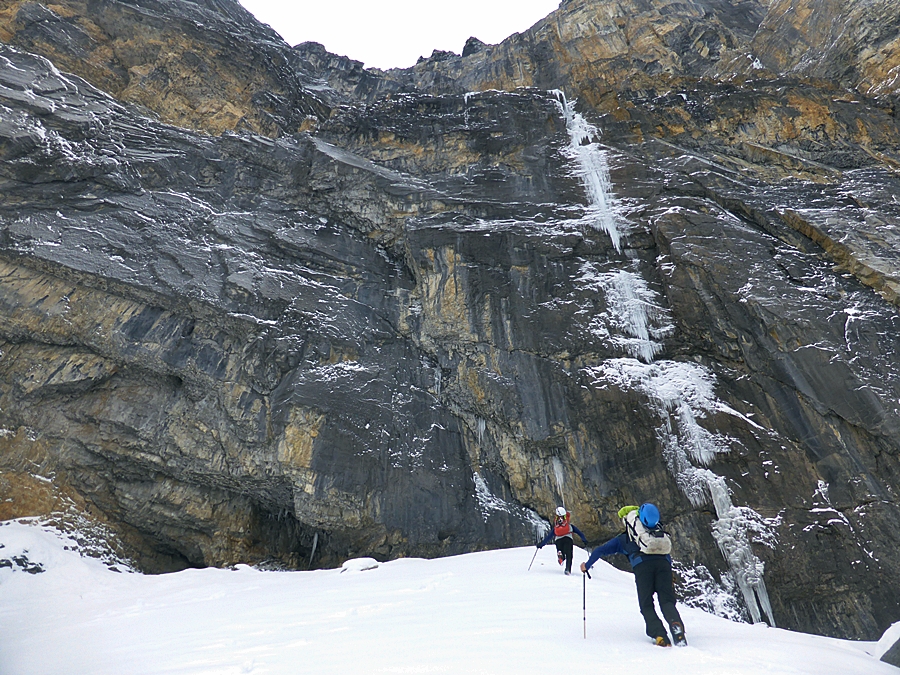 Raphael and Bayard approaching The Sound and the Fury.

The three of us, Bayard Russell, Raphael Slawinski and myself stood beneath a line of ice. The word ‘line’ suggests continuous, and the ‘line’ we now stood was anything but! This ‘line’ was disjointed islands, feeble daggers, and frozen blossoms crawling insidiously down from the snow field ninety metres above. This did not look to be a ‘line’ or a climb that I would choose to warm into winter.

The day before Bayard and myself had climbed Nemesis, the really classic ice climb of The Stanley Headwall. For Bayard and myself this was the first ice climb of the winter and most certainly a ‘line’. A week before I had completed two days of pulling on drilled pockets in the dark and rainy confines of a slate quarry up above Llanberis in North Wales and Bayard had hammered a few nails into wood. Nemesis was a sturdy progression.

Off the couch. I suppose off the couch can mean different things for different people? In email contact with Raphael the night before, I thought it prudent to point out to my lovably understated, and if truth be told, slightly bonkers friend, that if the three of us went to The Headwall to attempt the ephemeral streak that Raphael had spotted in an internet picture, he would possibly be leading the whole ‘line’. “Sporting.” That was how I described it to Raphael after taking a picture and emailing it to him. “Yes, ‘sporting’, it certainly looks that” Raphael emailed back, no-doubt rubbing his hands together at the thought of leading the first two pitches. “I’ve only climbed ice two days so far this winter also.” 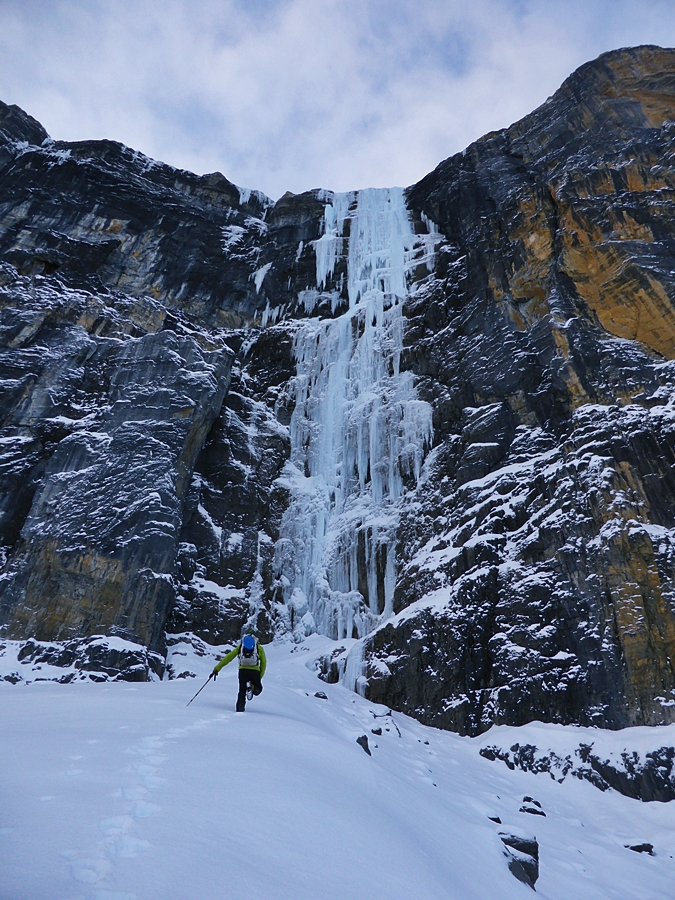 The day before. The very classy Nemesis with Bayard leading the way.

Exactly what the climb was, was almost as disjointed and ephemeral as the ‘line.’ “It’s a new route.” “It’s been done before.” “Its not been repeated.” “It was not climbed to the end of the difficulties.”

What appears to be the truth is, the first two pitches had been climbed, and the climb is called, The Sound and the Fury: Jeff Relph, Paul McSorley and Tom Gruber, November 04, although if folk law is to believed, Sean Isaac, author of the mixed climbing guide and the Canadian Alpine Journal decided not to enter it into the journal, because they stopped at the top of the first two pitches before the end of the difficulties.

These facts really didn’t concern me, I had other considerations, mainly staying alive and not being attacked by bears, but I’m sure it made the prospect of reaching the snow-bowl and continuing even more juicy for one member of our party, and as the three of us sat beneath the ‘line’ after a somewhat late start, I had several scenarios running through my head. The most obvious and sensible scenario was scenario 1:

Scenario 1. We would have a play and run away.

There were two other reasonably sensible scenarios…

Scenario 2. We would possibly make an inroad and run away.

Scenario 3. We would have a serious go and run away.

Every scenario ended in the sensible option of running away. Nowhere in the scenarios was reaching the top of the first two pitches. And the thought of us continuing to ‘the end of the difficulties’ (that is such a hilarious concept because if all of the ice was climbed until there was no more ice to climb, it still left half of the cliff above, with some very difficult, difficulties!) was about as possible as my booking a ticket for Pluto as a passenger on a microlight.

After a little mincing there was no-doubt Raphael was going to give it a go and when Raphael gives something a go, he goes. Sometime later he had a collection of gear below and some of it may even have held a fall, before he chose to leave the ice for the comfort of a corner on the right, where he belayed at the top. A two bolt belay that his corner had by-passed, was down and to the left of a hanging dagger. 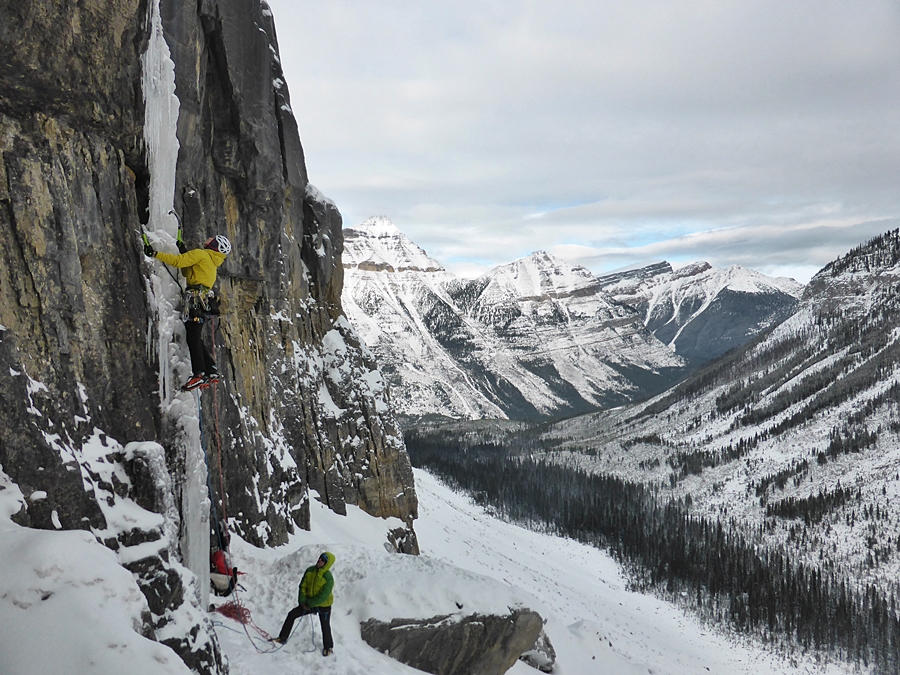 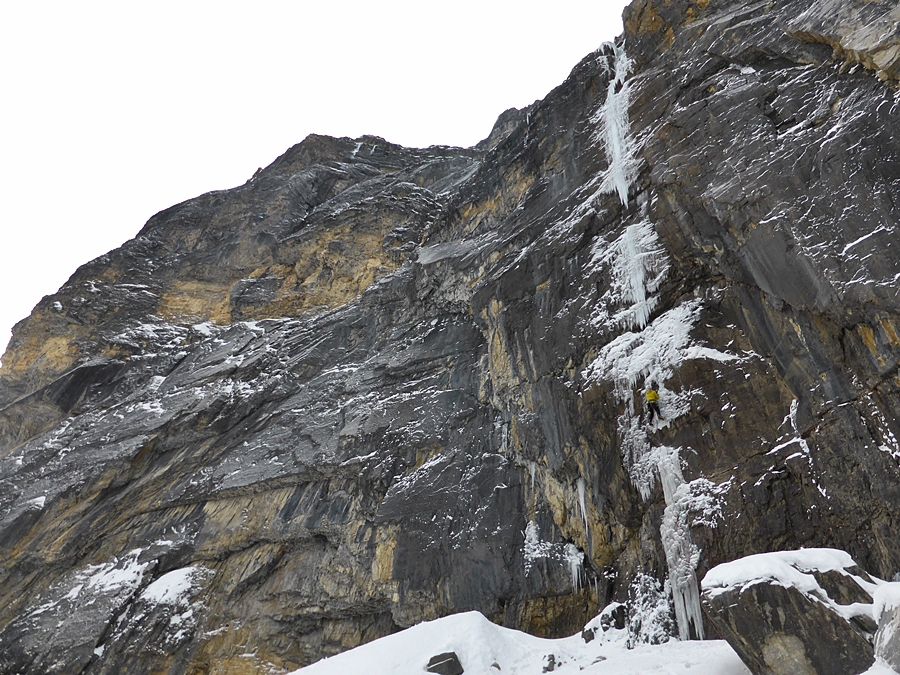 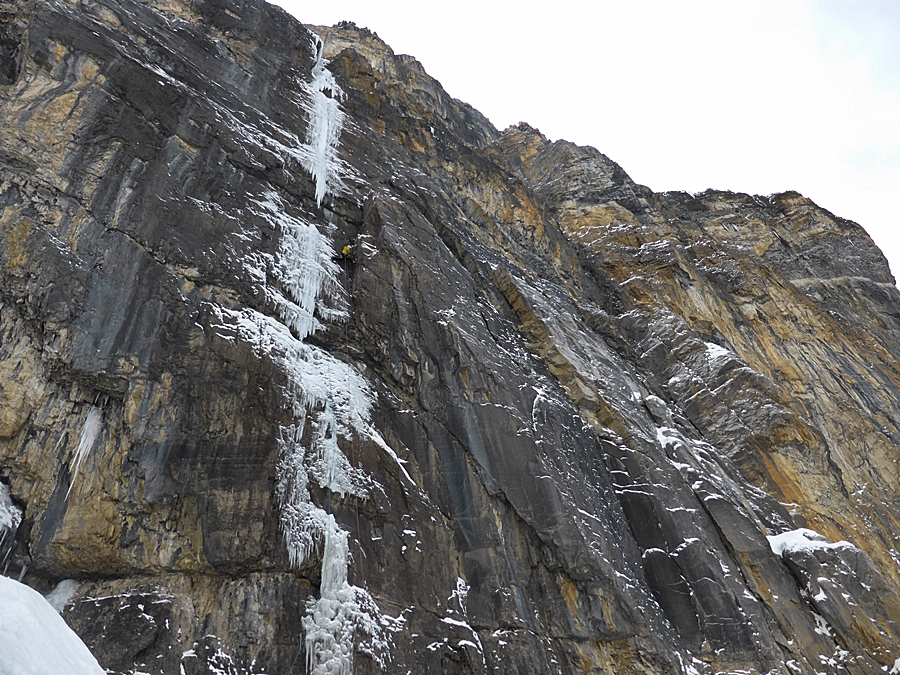 The Alligator Alternative! A fine and well protected corner when the ice is not enough to climb direct. 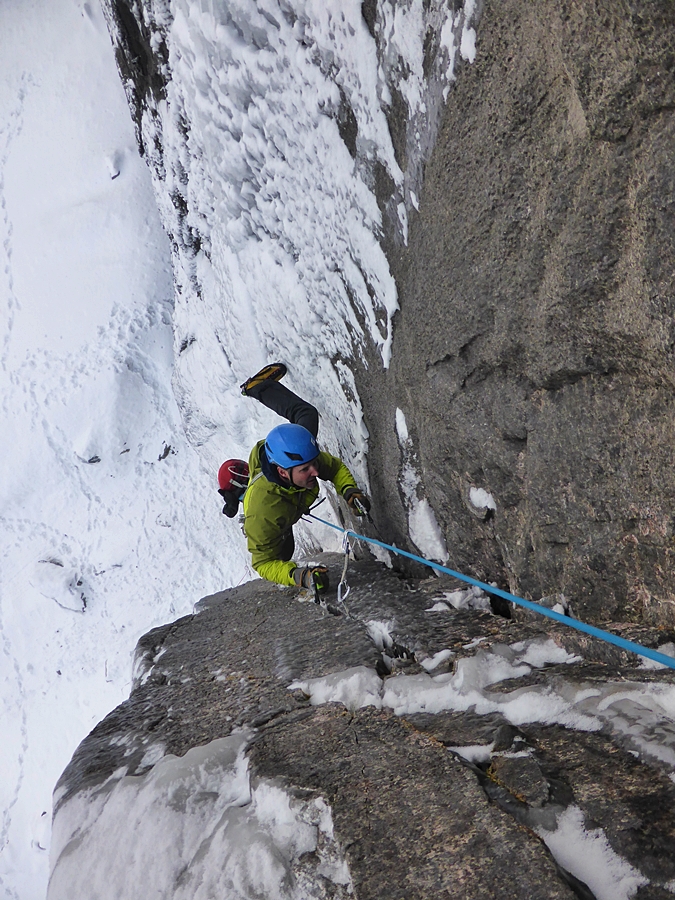 Bayard entering the corner of The Alligator Alternative.

It was a fine and bold lead for someone not quite off the couch, definitely not as much as Bayard and myself because he had 100% more climbing days logged, but when I pulled alongside Raphael, I felt less off the couch, and looking at two bolts that would protect the overhanging pull onto the thin dagger, I began to un-clip gear from Raphael’s harness.

“ERM, what are you doing Nick?” Raphael said looking somewhat shocked and even a little panicked.

“OH, YOU are going to lead this pitch.”

I looked at my friend and laughed, he looked like a child who had been told no more chocolate. And for a second I thought of saying you go for it, but then I looked at what ‘it’ was – a dagger of thin ice protected by a rocky overhang, leading to a narrow and rippled spine of thin ice, that turned into a confined corner. It looked exceptional. The chance of a Brit getting to lead something like this was rare, and I knew if I showed the slightest hesitation or even the merest hint that I would bow to pressure and pass it over, there would be no getting it back, Raphael was like an alligator with his eyes popping just above the water. I continued to un-clip gear from Raphael’s harness and for a few seconds Raphael continued to look like a child without chocolate.

I set off determined to give this pitch a good go and show no hesitation for the basking alligator was watching closely. I would like to say I pulled through the overhang like a majestic wildebeest, but I didn’t, I tackled the overhang and dagger almost like climbing a steep and muddy bank on the far side of a river. I skated and slipped, but at last, at last I was above and established, and no way was I going to allow the predator to sink his teeth into this pitch now. (The story of the alligator ascending the overhang goes something along the line of this… He turned to Bayard, mid crux, while wearing the rucksack and said, “I’ve been bouldering in the gym, and that move felt very easy.”) 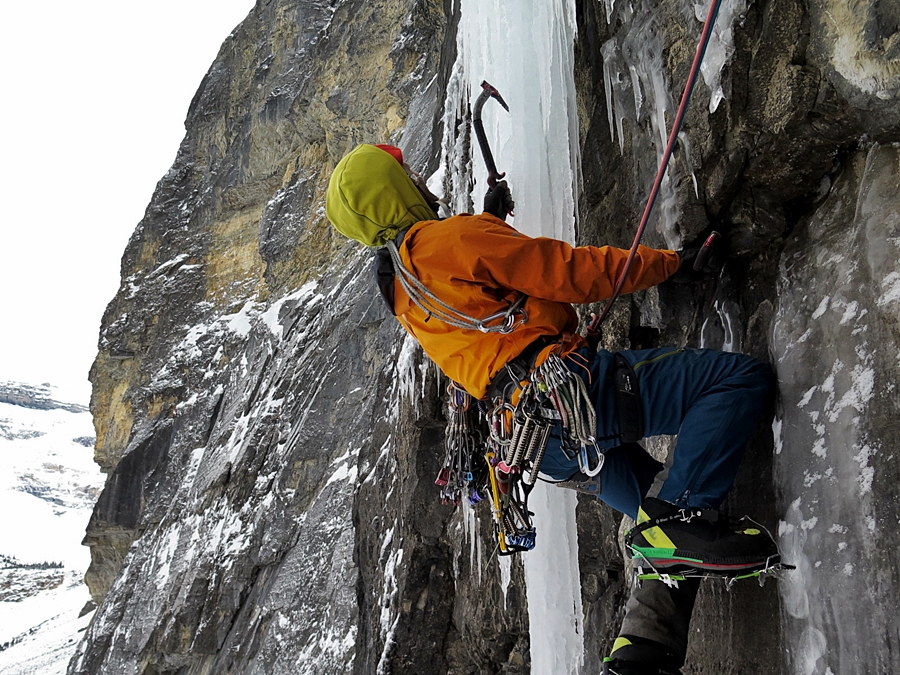 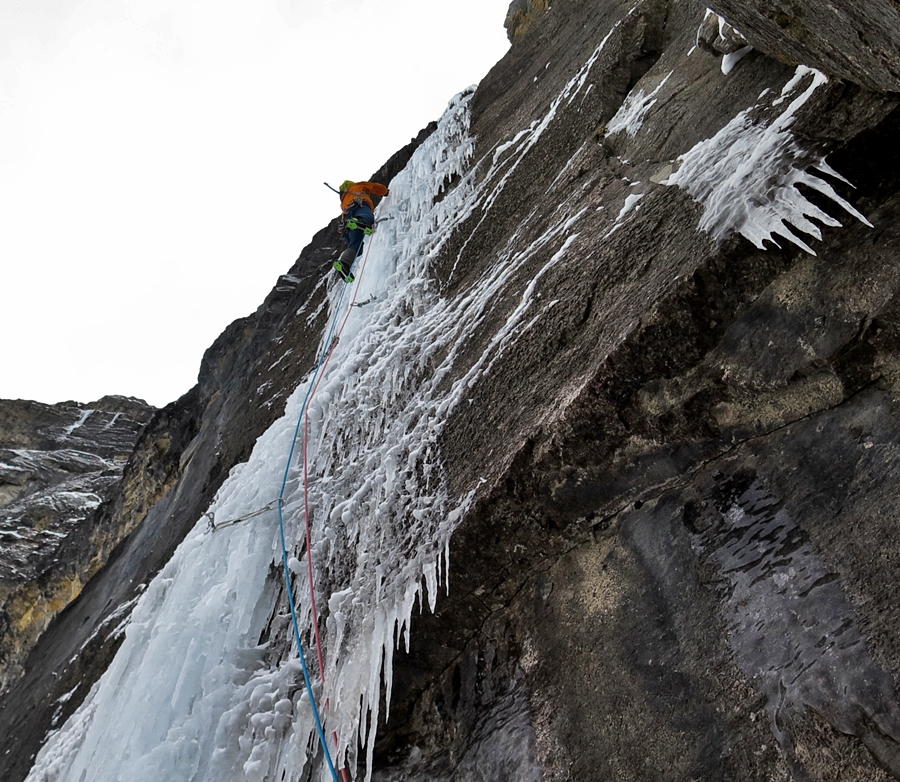 Some time a lot later, I belayed at the top of the second pitch looking above; a large snow bowl; a few steps of ice, a ledge, a gully and a 30m pitch of WI5. Some may say these are the difficulties above, but not me, the climb was the two pitches, the difficulties above were nothing to do with what we had climbed, and as I took so long to climb, the dark was not that long away. The alligator was on a time limit having a dinner date back in Calgary, and Bayard would certainly see sense. That was it then, I would be drinking wine in a few hours with a couple of great pitches to help with the warming into winter.

“Its not the route Raphael.”

Bayard now joined this feeding frenzy. Bayard would be the voice of sensibility. The alligator looked at him, he fixed on him with glazed eyes.

“What do you think Bayard, makes sense to go to the top of the difficulties, we have plenty of time.”

This was the first time Bayard had been in the company of a prehistoric climbing predator and he crumbled in a second.

“Yeah, lets go to the top of the difficulties.”

The alligator rolled his eyes as if latched to a fresh piece of meat. It hadn’t taken long for him to get his own back for my ‘stealing’ his quarry! 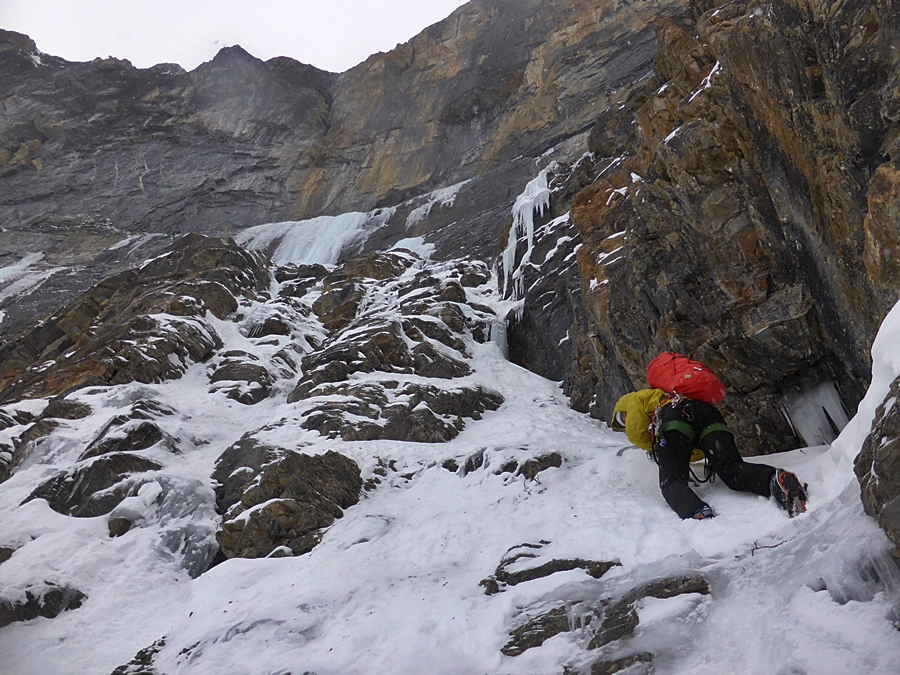 The Alligator continues to swim up-hill without slowing, almost as if he smells a fresh kill. 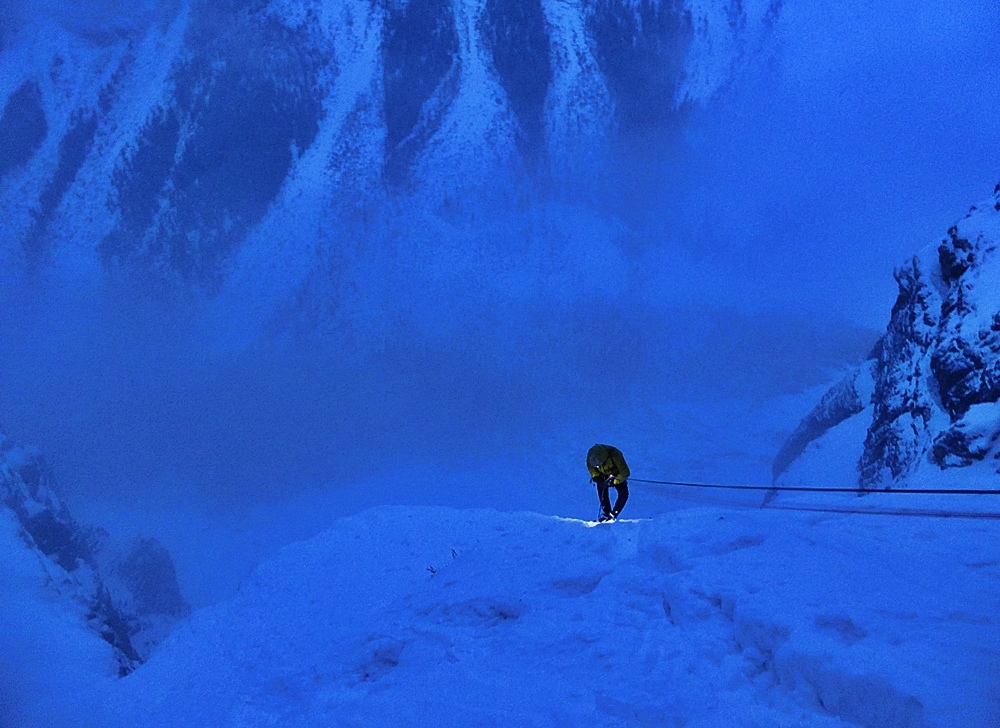 Back to the depths…