Protection. What once was a 5-hour walk with a Bivi recommended, becomes a 2.45hr jaunt!

Raphael Slawinski sent me an email, and attached to the email was a picture. There was no information or description – there was no telling where it was, or even how long the drive to where-ever the start of the walk-in began. A mystery. A Slawinski mystery. What’s the worst that could happen? The only information Raphael gave, “three hours in, two out”. I returned an email letting him know that Bayard and I were keen. The line in the picture looked almost alpine – deep gullies, pencils of ice, and it finished at the top of the cliff. Later that same evening I squeezed the possible length of the climb from Raphael, “Its 300m.”  But still no hint as to where it was.

While climbing on the Headwall two days later Raphael let it slip.

“Yes, but its not under snow and there is a track, it’s much quicker this year.”

I have walked into climbs with Raphael frequently now, and to be honest, I didn’t believe him, or more to the truth, I did believe it was three hours, but three hours at his pace, a Slawinski pace, even Mo Farrah would be taking silver in that event!

Over several visits to Alberta, I have climbed on the Trophy Wall on Mt Rundle four times. The Trophy Wall is where the famous climb, The Sea of Vapours is found. The guide book time states anything between two and a half to four hours. My first visit to the Trophy Wall was in 2003 with Dave Hunter and it took five hours. The second time in 2008 was with Ian Parnell, it took four and a half. The third visit took four, and the fourth, which was on the same trip in 2012 and alongside Rob Greenwood (no slouch) while following Raphael, took two and a half, car to car! Either I was lazy or Raphael is something of a speed freak, and I know where my money is placed.

Bayard, Raphael and I set off heading for Protection Valley with two teams ahead of us. Other people climbing at the same time and day was almost unknown for Protection Valley and not a good omen. Raphael was a little put out. I feared for my legs, especially as one of the teams ahead were friends,  Jon Walsh and Michelle Kadatz. Michelle had set off in a run trying to keep up with Jon. Jon had set off in a sprint as soon as he clocked Raphael. Michelle shouted, “Hey, Jon, slow down, I don’t want to race, I definitely don’t want to race Raphael.” But Jon was nothing but spindrift knocked from a wispy branch.

Two hours, forty five minutes later we stood beneath the base of the climb. And the climb, which would have been a new route, was called Grab the Cupcakes – it had been climbed three days earlier by Kris Irwin and Jay Mills. Not being locals, Bayard and I were unconcerned about the line being climbed, but I’m not so sure about our speedy friend. But we decided to climb the route anyway, and it was enjoyable and fun, well for most of it anyway! 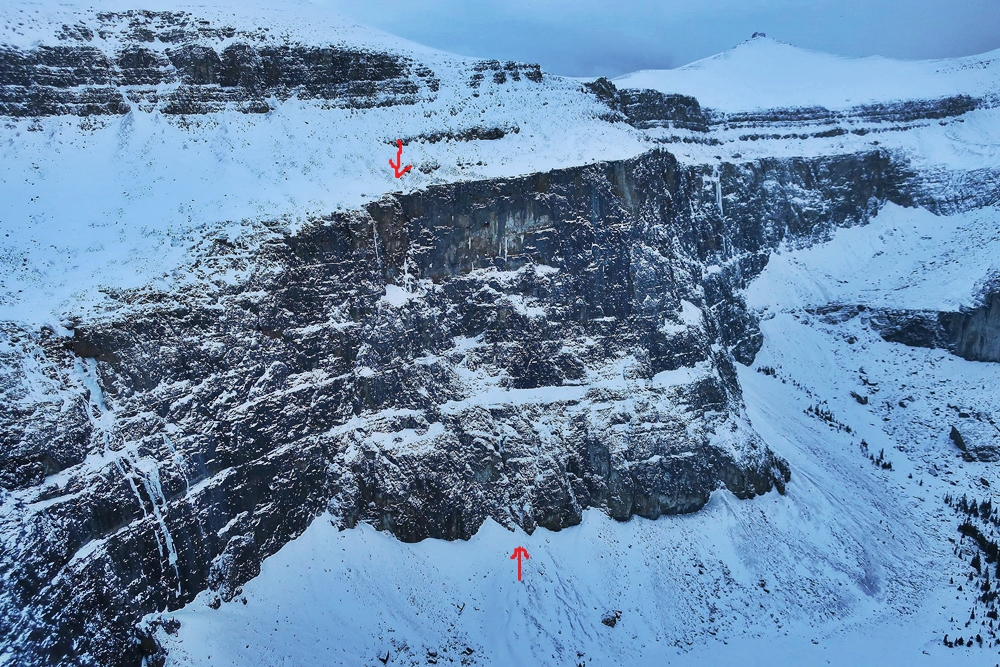 Jon Walsh picture showing the crag and the line of Grab the Cupcakes.

I hung from the belay. My two friends hung alongside. The daylight was becoming washed out, jaded almost. The end of the light was about an hour away. Plenty of time for thirty metres, although this thirty metres was an overhanging groove of what looked to be quality Canadian Rocky Mountains choss. I racked up thinking it might be fine. I could see ice, a few pockets, a crack, some vegetation and the top. No problem. 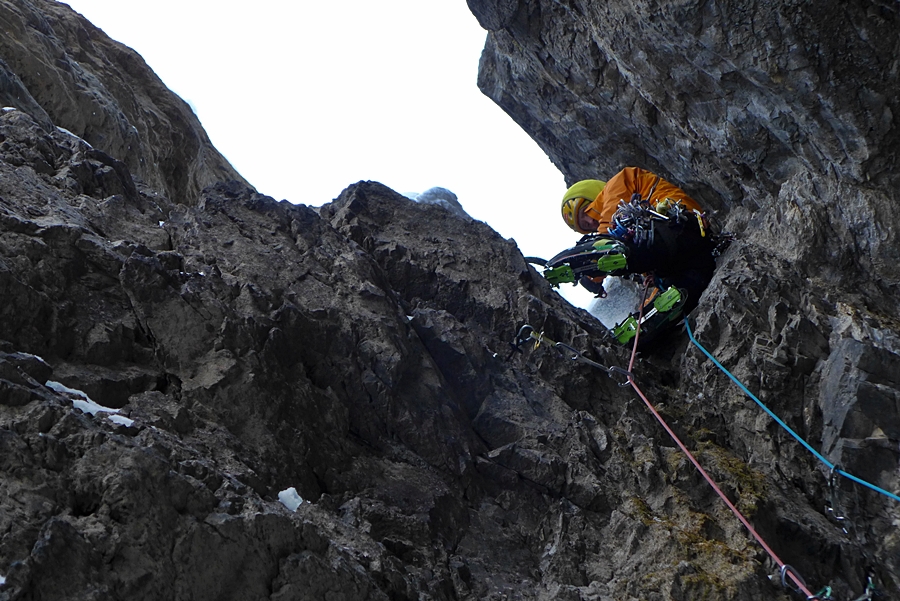 At fifteen metres in, wedged into the base of the overhanging groove, all was good. ‘Its good, its fine.’ The rock around me was yellow and orange and if it had not been frozen it would have poured with dirt. Over-cramming a cam into a crozzled pocket, I hook an edge with a single tooth of my pick, while hooking frozen moss with the other. The wind increased, causing a whirligig of snow to whip the groove above. Dirt in my eyes. Scraping. Wind whistling. Leaning back. One, and then two front-points to high and out of sight edges. A fleeting glance at the cam and heave. The wind howled. The rock, all jagged and orange stayed in place. The top of the climb, almost the end, was in reach, but the wind increased and with the wind was spindrift. My head was blasted. Ice cream brain hurt like the worse headache ever. Eyebrows froze, a thick white, and eyelashes, so heavy with frozen tears of ice, almost pulled lids closed. I couldn’t look up, I couldn’t look down. I closed my eyes and yelled profanities. The skin of my face tightened to a frozen mask. Every time I attempted to move up, or look for feet placements the spindrift strafed me in the eyes and face. “FUCKER!”

At last a slight lull in the wind and I scrabbled the last few moves to clip a newly constructed abseil point. Before leaning back, I checked the two nuts that made the station, both looked good, so I weighted the tat that joined the nuts, took a breath to calm myself. “SAFE.”

Raphael climbed first, followed in close proximity by Bayard. I didn’t expect either of them would fall, but the groove was fall-offable because of the quality of the rock. Raphael was into the crux and the wind dropped and along with the drop in the wind the spindrift ceased. I felt hard done to, so looking down I shouted “Shall I kick some snow on you?” His reply was a little curt, “You fucking well better not, I’m climbing the crux.” I laughed, but in a second my laughter stopped as the lower nut of the belay popped, hanging in front of my face like some gold beacon of very bad.

“ONE OF THE NUTS HAS COME OUT OF THE BELAY, DON’T FALL OFF.”

“How many nuts are in the belay?” Raphael shouted hopefully, but I’m sure he knew the answer. 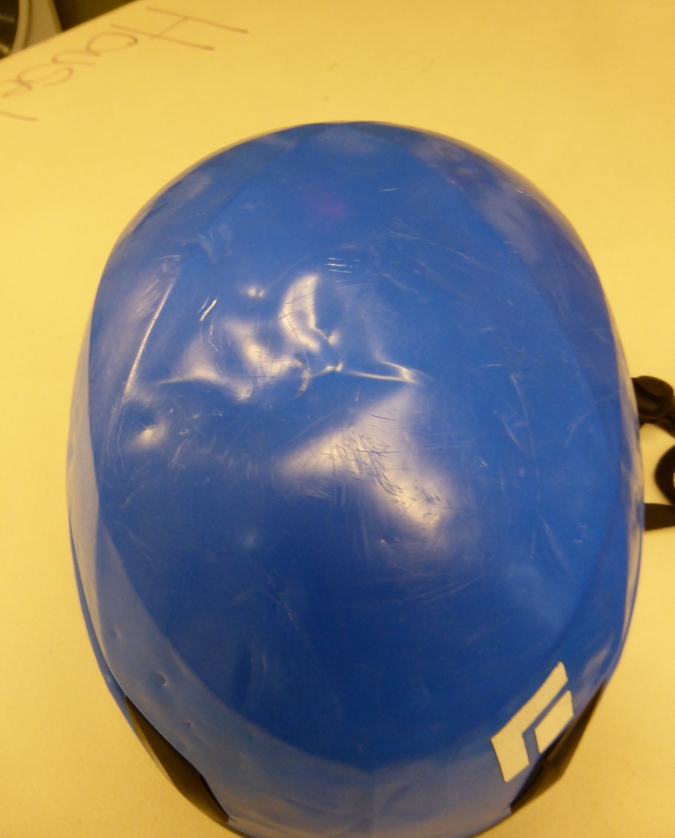 Bayard’s helmet sporting a little dent is up to the job.

Raphael, above the crux and alongside me started to run for the top of the crag, which meant I had to pay out and take in Bayard who was at the mossy hook move. I yelled, “STOP.”  Taking in, paying out, attempting to replace the nut – the wind chose to pick up again. I repositioned my foot so I could see into the crack and unbeknown to me my foot released a rock that clattered down the groove and hit Bayard in the middle of the helmet. He screamed. Raphael wanted slack. I wanted to replace the nut. The wind howled. The snow scuttered. The sun was almost gone. The sun was almost gone…

At last the nut was replaced. Bayard was climbing again but complaining about his neck, (what a wuss!) and above me, just up there, Raphael who had complained about the tame nature of the climb was at last looking content.

The left hand side of Protection. 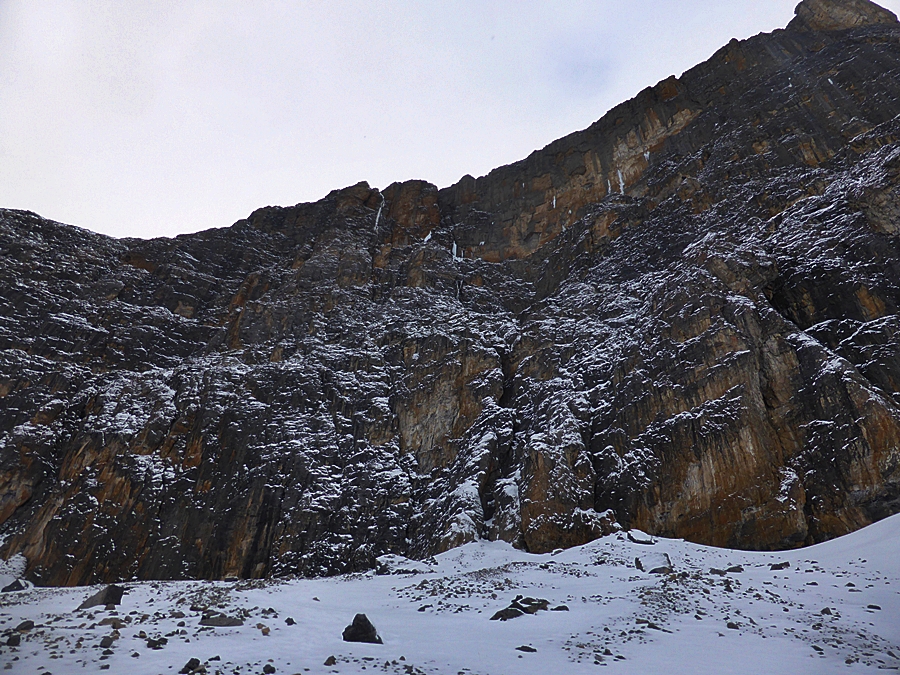 Grab the Cupcakes takes the deep chimney in the middle of the picture and leads leftward, to the right hand icefall beneath the top of the cliff. 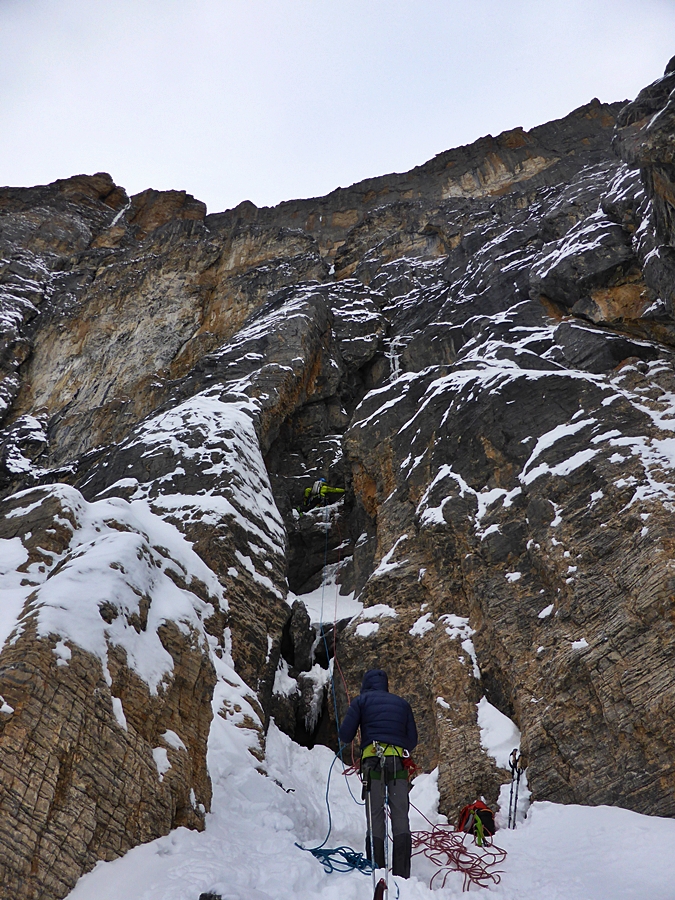 Bayard gets us going. 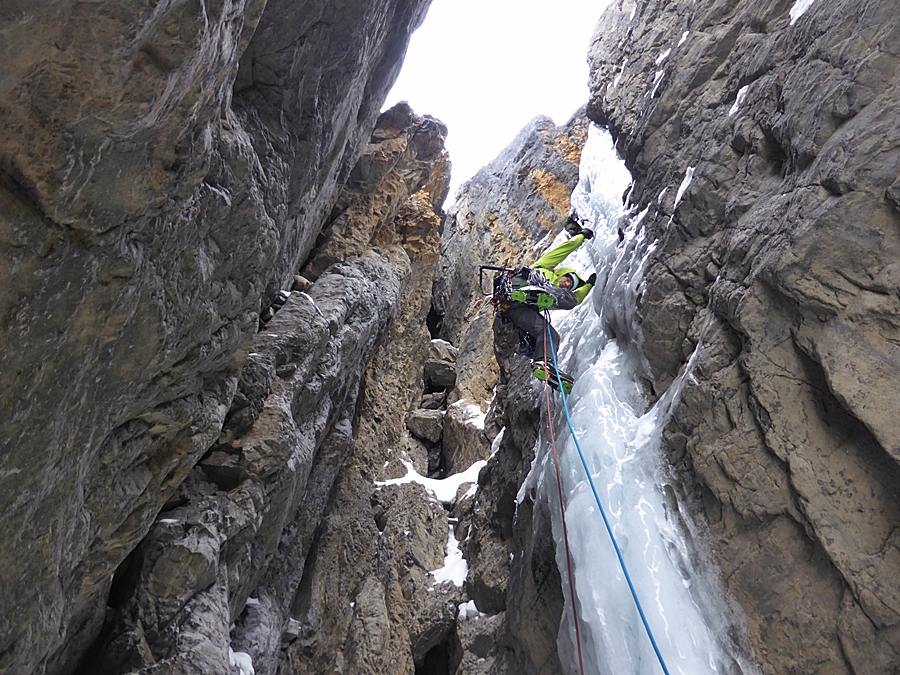 Raphael hoping for something a little more exciting while climbing some pretty uninspiring and easy climbing! 😉 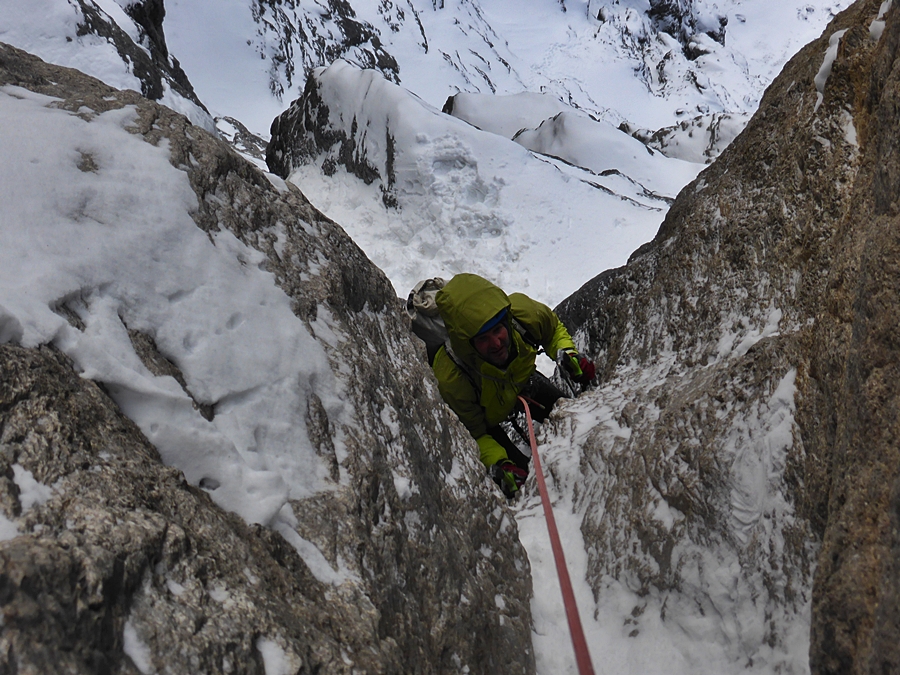 Bayard gets to grips with a typical Rocky Mountain slippery groove. 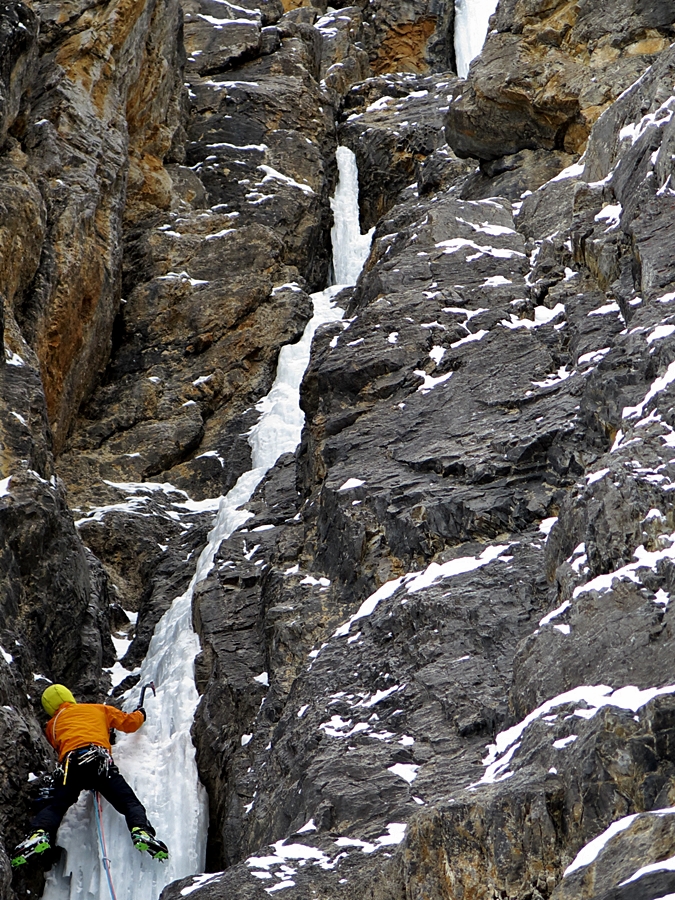 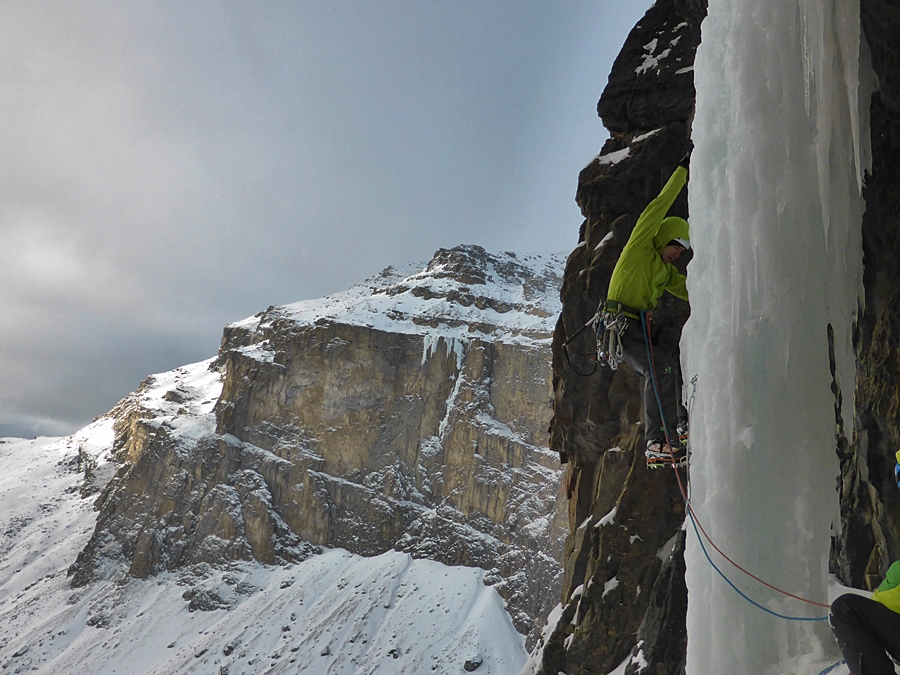 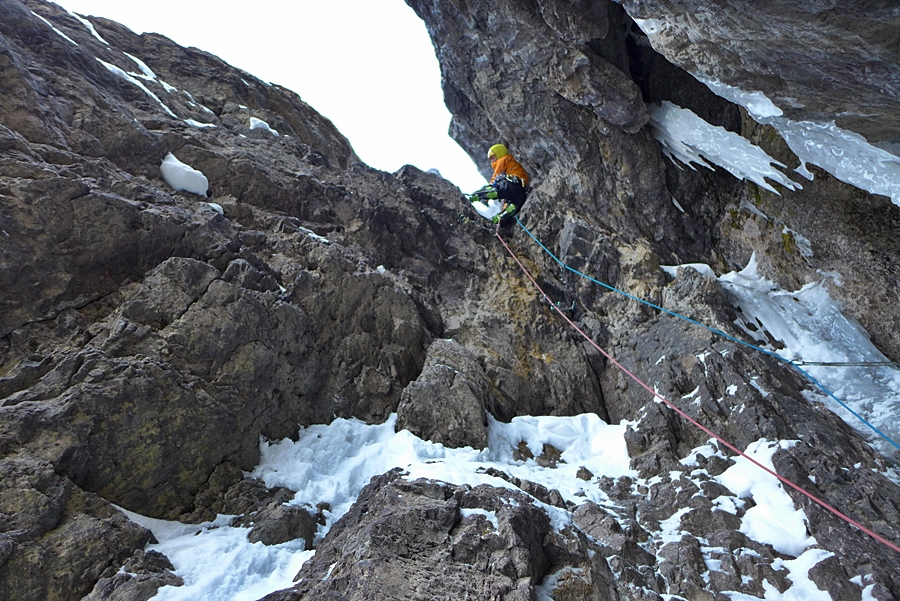 The wider view. In the groove. The final pitch almost looking at the top but not able to see the top. Pic Bayard Russell. 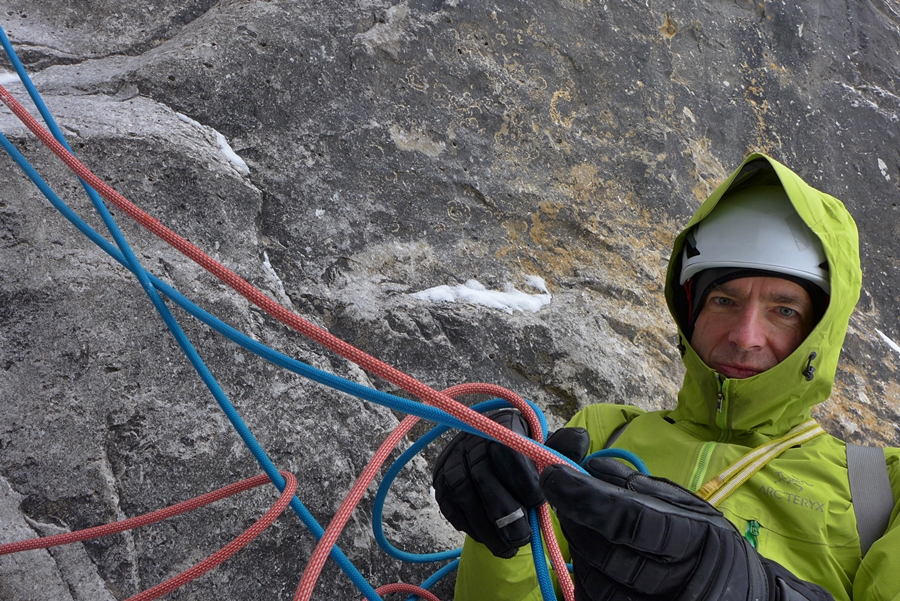 This is not the droid you are looking for… Starting to brighten up a little as the danger increases. Pic credit, Bayard Russell. 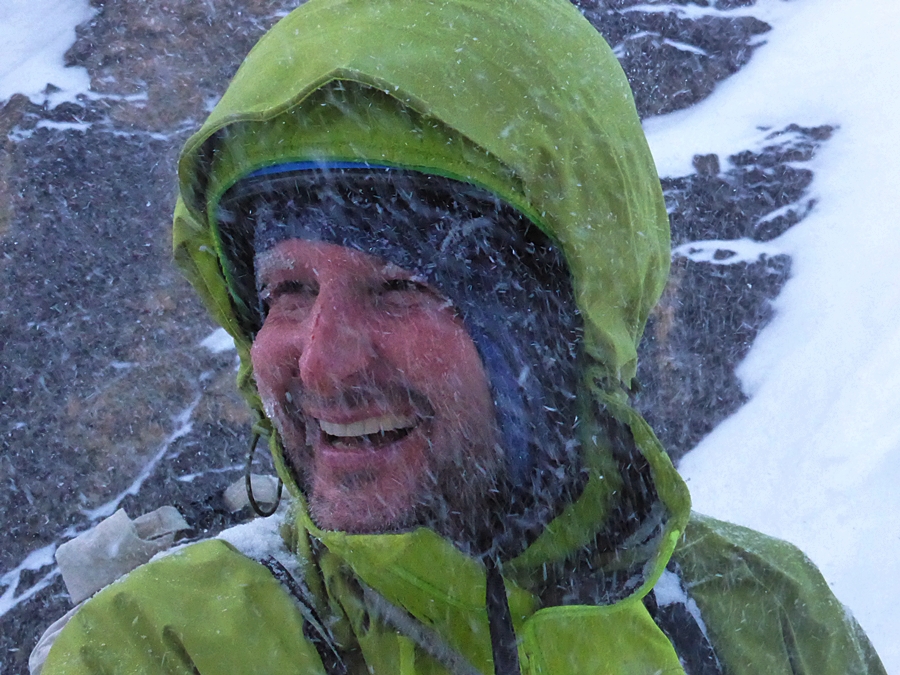 A rock on the head makes you look like this.