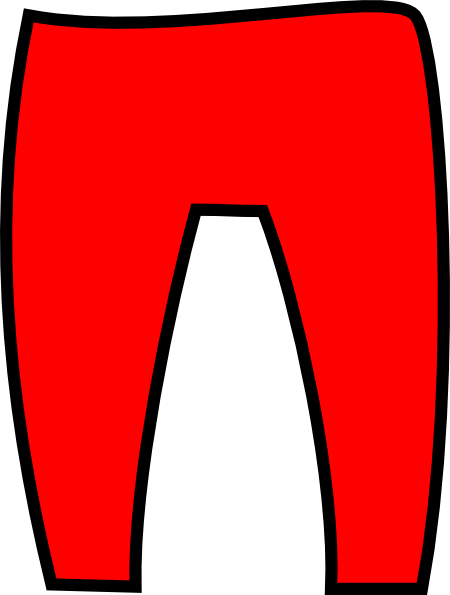 I had once spent a weekend in the company of those shocking red trousers when alongside the owner and Guy Robertson we had climbed in the far Northwest. But today, it was early, and I didn’t make the connection, it just didn’t register. The loud Scottish blather didn’t click either. I am old, and truth be told, I would have thought a team so young and fit would have been moving faster. It just didn’t register.

It was dark on the steep approach to Stob Coire nan Lochan. It really was dark. And even when I stopped to allow them past, because they were too happy and chatting too loud for me, (a person who finds happy blather at 6am too much) I didn’t recognise them, and in my defence, they didn’t recognise me either. Another old boy who doesn’t know when to let it all go…

Tim Neill and I crawled up the steep hill. Red Trousers and his partner pulled away. I was happy to bimble and relaxed with the return of peace and quiet. I really do struggle with early and gregarious!

The stream to my right gurgled, and the sun breaking the horizon lit the snowy track ahead. Red Trousers pulled the final steep slope, (which I call Heartbreak Hill) leading into the coire. As I topped Heartbreak Hill, the sight was one to behold. The coire was stuffed full of smooth snow, not a single boulder poked its nose. Red Trousers and his partner had stopped on the flattening, which was quite a long way from the climbing. They chatted while changing clothes and looking around.

Earlier in the season I had climbed in Stob Coire nan Lochan with Murdo Jamieson. Murdo regularly climbs with Iain Small and on that occasion Murdo told me the story of Iain refusing to stop and gear up until he was ahead of anyone else. The reason for this was to be sure he was ahead of the game (aka the competition). With this in mind, and because Red Trousers and his mate were obviously undecided on their route, I bumbled, following their track, until passing close by. It was then I heard them mention the climb Tim and I were here to try, a climb called The Duel. But this was fine, they were obviously just talking about all of the climbs and the Duel was well known, it stood out, it was a good marker and the logical place to orientate where the other climbs went. No worries, keep walking. (We actually wanted and did climb The Duel into En Garde, a recent winter addition for folk who don’t like off-widths).

On hearing mention of the Duel for a second time my head dropped to look at my boots (I was weary) and this was the reason I didn’t spot the massive cam clipped to the outside of a rucksack. Now, being old, I don’t remember, have I mentioned that the Duel has an off-width and in the guidebook description it suggests the use of a massive cam to protect the off-width. No, maybe I didn’t! But with my weary head hung low, almost looking away, skulking some may say, I quietly shuffled past.

After passing Red Trousers I followed another teams steps for as far as possible. They were heading to the main section of the cliff, but I surmised by following their steps I would save energy. Not for a moment did I think by heading in the less direct course to the base of the Duel I would disguise my route intentions. Of course I didn’t, I was just saving energy. Although for no apparent reason, as soon as I began to traverse and my intentions would become clear, I managed to stir the old body and find a bit of extra energy, and unless the red trousers were being worn by Usain Bolt, I was pretty sure no one would be passing.

I stood beneath the buttress where the climb began and below Tim had stopped to chat to Red Trousers and it was then I remembered Andy Inglis owned a pair of extremely bright red trousers. I liked Andy, in fact I had been meaning to contact him to see if he was free to climb. Andy was a very good winter climber and the Duel would no-doubt have been on his hit list, but no, no, it couldn’t be Andy, because Andy would never had stopped where he had. But you never know, maybe it was Andy, and a bumbling old man was judged to be no competition? 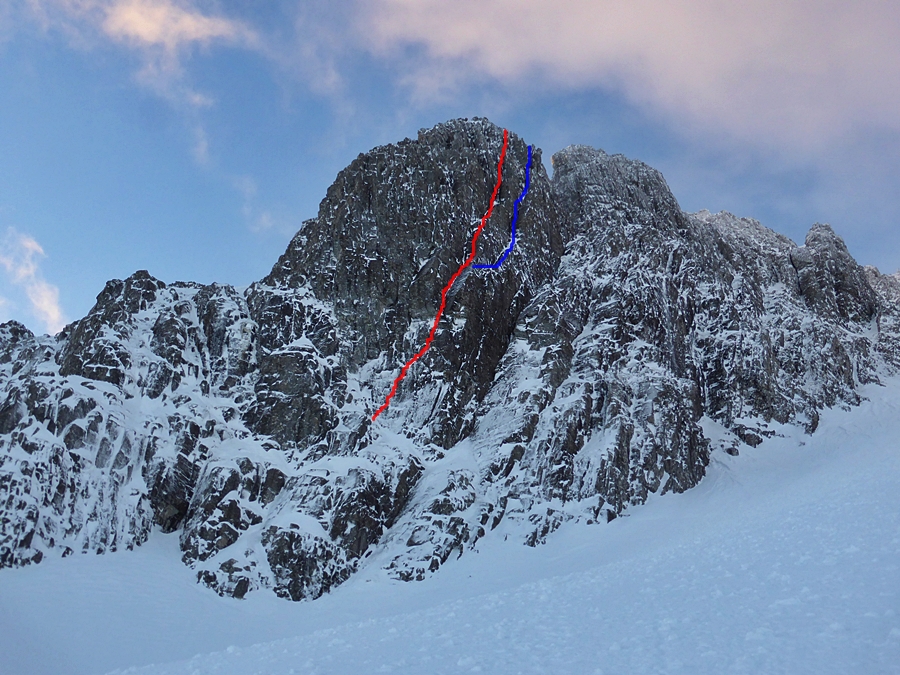 The red line is the line Tim and I climbed, (first winter ascent on the 16th December 17 by Murdo and Iain Small) which basically covers the crux of the Duel into an E1 called En Garde, ramping up the sustained nature of the whole climb, but does not need a massive cam! The red into blue, is the original line of the Duel. The grade of both is IX/9 More info here http://www.scottishwinter.com/?p=6629 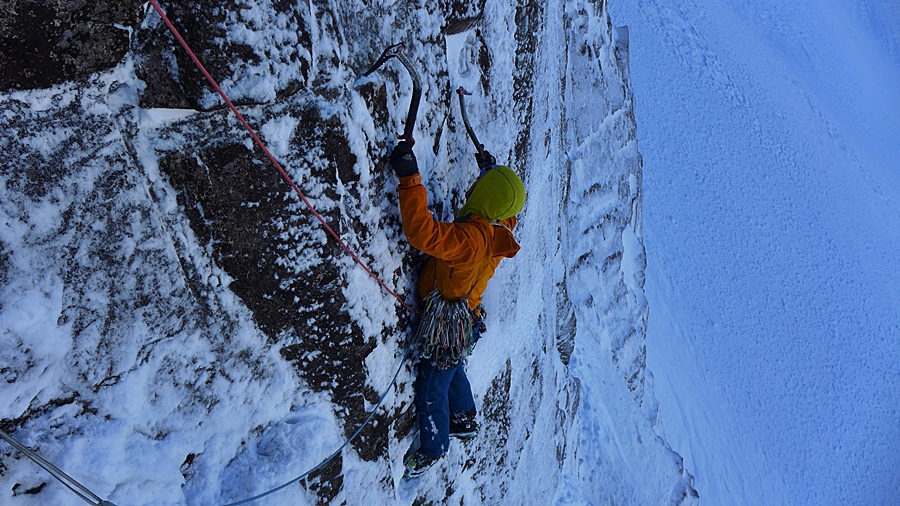 After inadvertently attempting a new, not direct, more coming in from the side, but much harder start, I found the correct line! pic credit, Tim Neill. 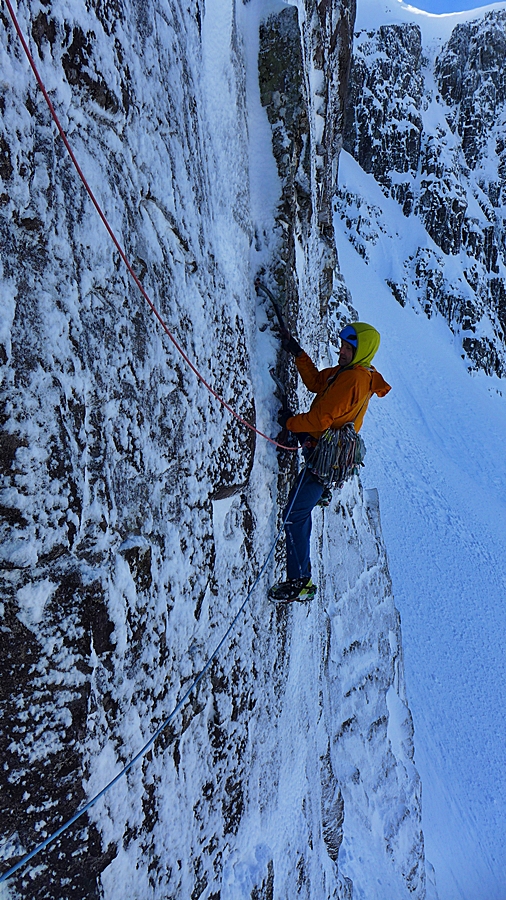 The groove is not as giving as an old climber would hope. Pic credit, Tim Neill. 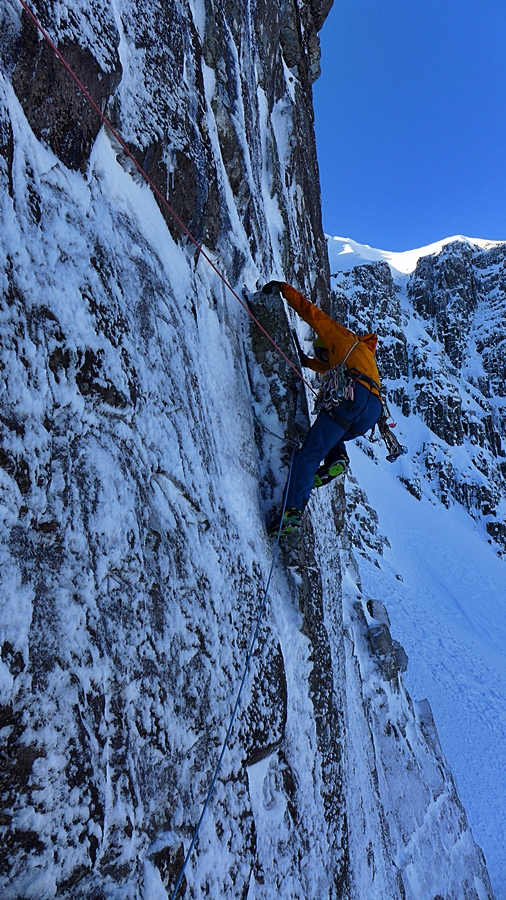 The biggest hold in the world, but standing on it is quite tricky. Pic credit, Tim Neill. 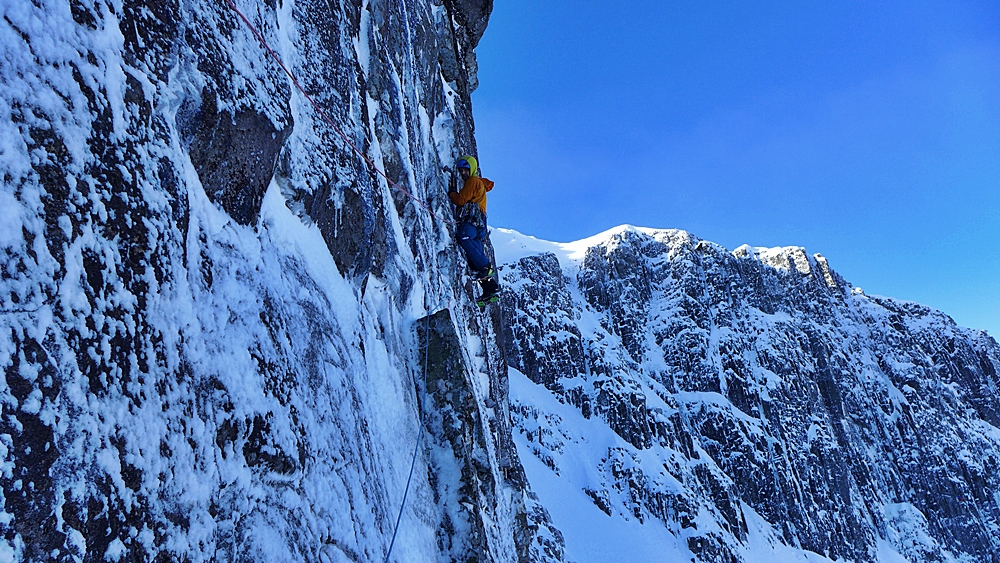 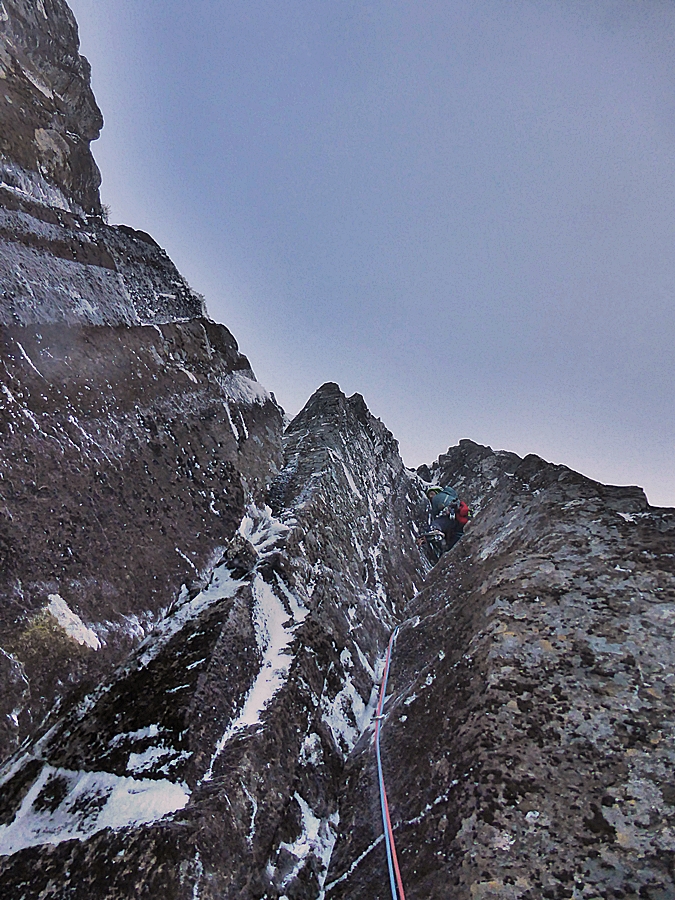 Tim on the fun, but really steep, second pitch of En Garde. Pity his jacket wasn’t a bit brighter!