Beinn Bhàn on the Applecross Peninsular. NW Highlands of Scotland.

My van is parked in a lay-by fifty metres before a bridge crossing the Kishorn River. To continue along the road, the Bealach na Bà, (Pass of the cattle), takes you to the wild, and almost deserted, Applecross Peninsular.

I’m sitting on the side-step of my van’s open door, drinking a mug of tea and looking across open marsh and the river. On either side of the marsh, the hills are snow covered. The river is slow moving, the sun reflects on the surface of the water and even though its three in the afternoon, on a winters day in Northwest Scotland, the air is still and almost warm. The sky is clear.

Hanging from open doors of the van are clothes, bedding and gear, all drying – all be it, slower than the water in the river moves towards Loch Kishorn. Eventually the water will run to the Inner Sound, a straight separating the Inner Hebridean islands of Skye, Raasay and South Rona from the Applecross peninsular.

My axes have sharp picks and crampons have freshly filed points. The rack is sorted, ropes and gloves dry. Set. In hundreds of days of Scottish winter climbing I can only remember a handful, (and a small handful at that) of days like this; sun, no wind, clear sky, frozen ground, hardly any humidity, and this is possibly the first time I have experienced all of the above and been able to stay in this peaceful, isolated environment after climbing.

Earlier, at 6.30am, Murdoch Jamieson had driven from Inverness to join me, where, in the dark, we sorted gear and began the walk towards Gully of the Gods, Coire an Fhamair on Beinn Bhàn. 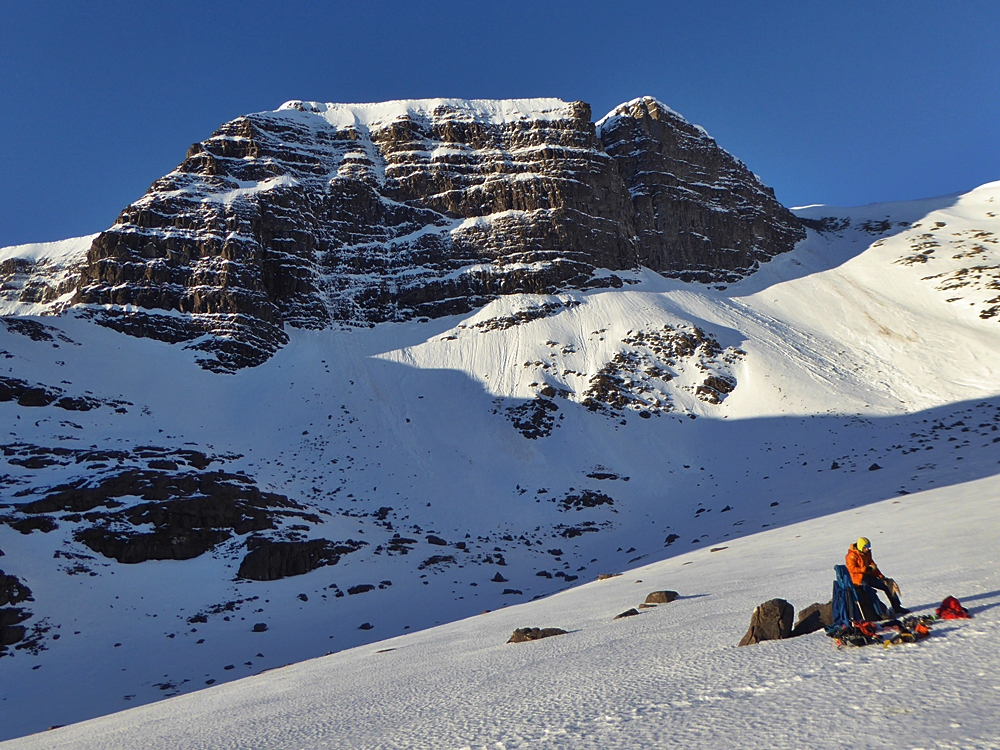 Myself sorting the rack beneath Coire an Fhamair on a day of remarkable weather. pic credit, Murdo Jamieson

…The walk-in was like never before, almost dry underfoot with no snow and when we reached the coire we were by ourselves and the sun shone and the wind was none existent. We climbed the ultra-classic, Gully of the Gods, without any knowledge whether it was in condition or not because no-had had reported it. I would rather take a punt than have guaranteed anytime, because when it comes-off, it feels special and bloody hell, this was already special given the weather and conditions.

At 1.30pm we left the coire; having climbed, topped out, returned to the bags and packed up – then looking at the cliff, which was very lean in the dry and sunny weather, I took several pictures before returning to Murdo. “Here you go, look at this, I reckon Die Riesenwand will go.”

Murdo studied the shots and after brief consultation with pointing fingers that traced a weaving line from blobs of white to thin threads of silver, we decided that yes, Die Riesenwand would go and it would be a great option for tomorrow… 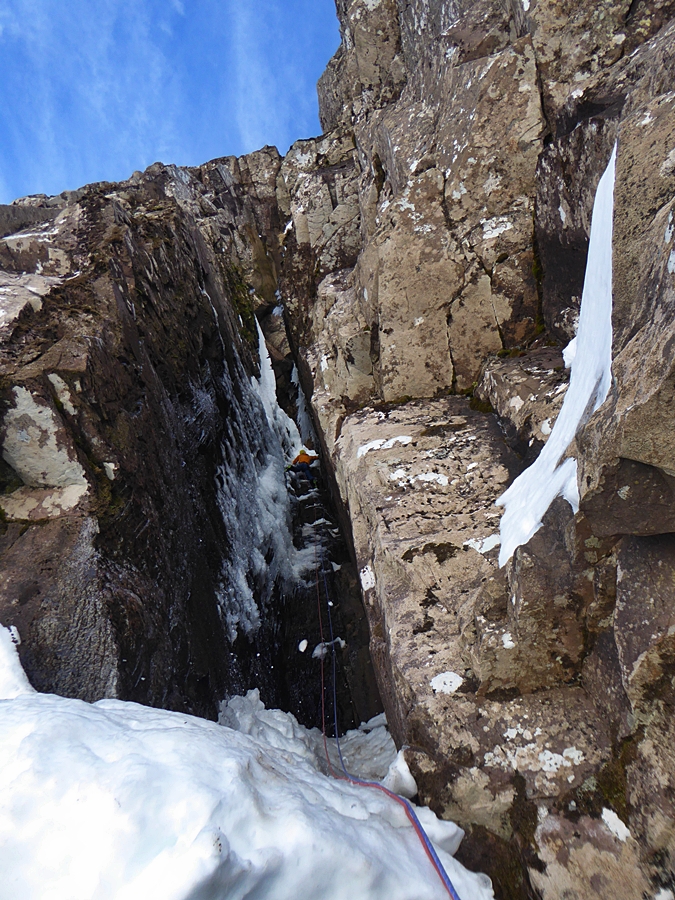 Myself, pitch 1 of Gully of the Gods. Pic credit, Murdo Jamieson. 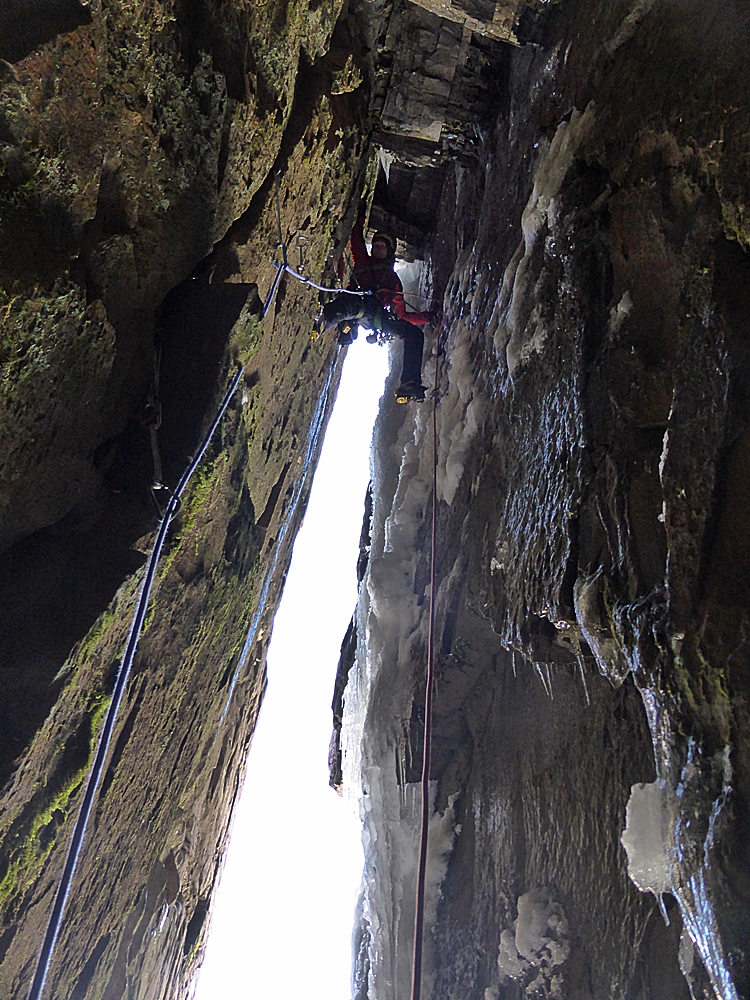 Murdo on the second pitch of Gully of the Gods.

I pulled the bedding from the door and stuffed it into the back of the van. It was 5pm, the sun dipped and cast shadows across the surface of the river. A heron eased his stilts through the shallows and struck, coming out with an eel, all twisting and wriggling around his lance. One quick flip and the eel was gone. A chill breeze stung, soon I would go to the back of the van and sort some food before going to bed and another early one.

The second day of climbing was possibly even better than the first. Murdo and I climbed Die Risenwand adding a new, and more difficult finish. Once again, I had led the easy pitches that took us to the top, this time chopping through a large cornice, that once surmounted, led into the dazzling sun and a shimmering vista of the Isle of Skye and the Black Cuillin across the blue of the Inner Sound. 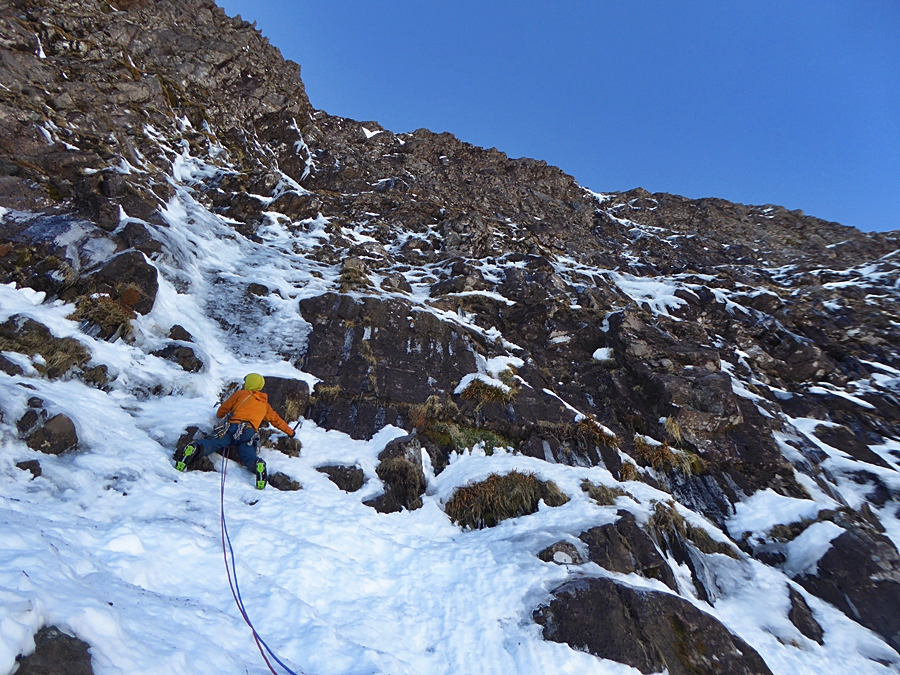 Day two of a memorable weekend of climbing. Myself on the first pitch of Die Riesenwand. Pic credit, Murdo Jamieson.

Murdo on the first of the traverse sections of Die Riesenwand. 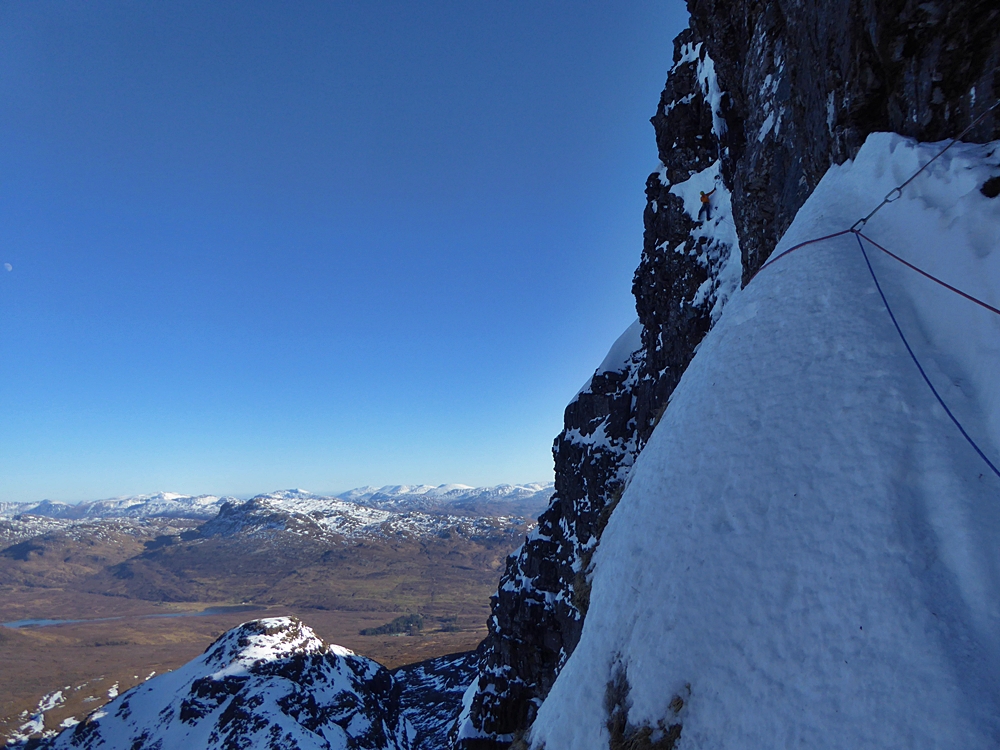 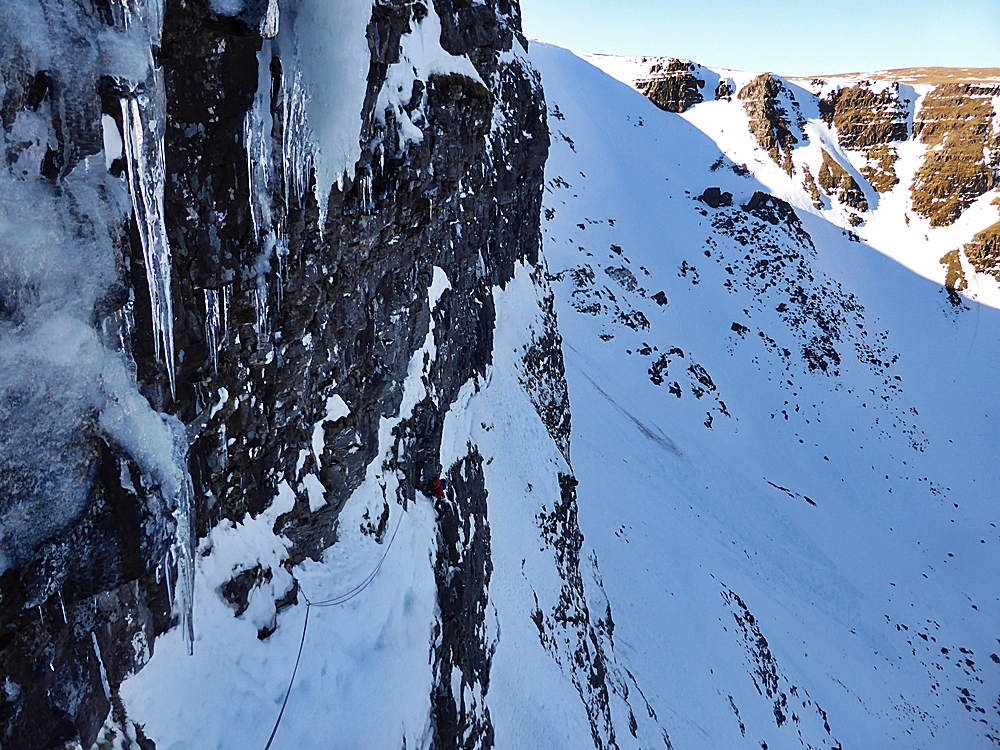 Murdo follows on the high traverse. 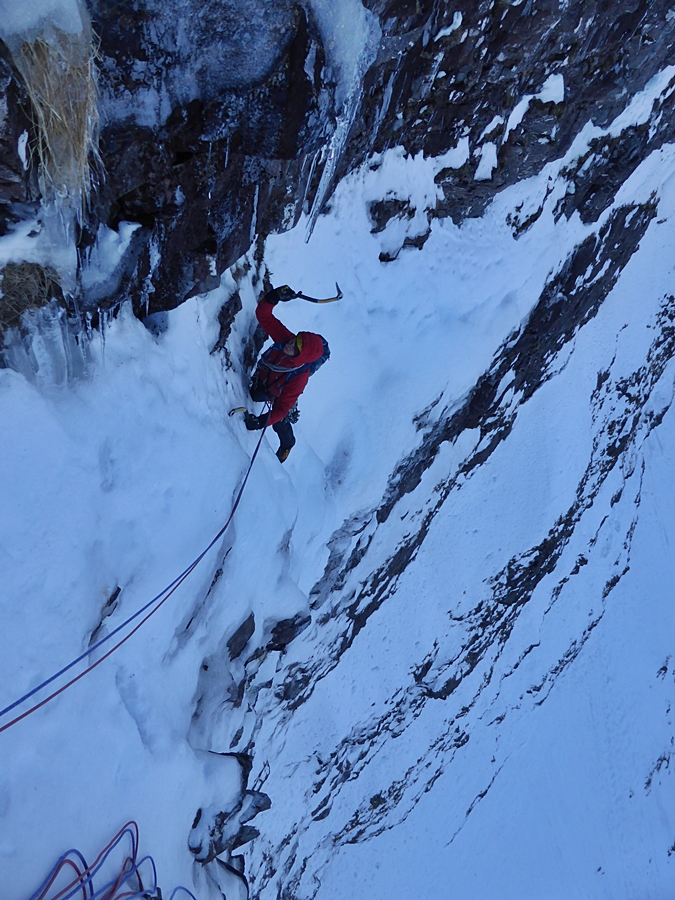 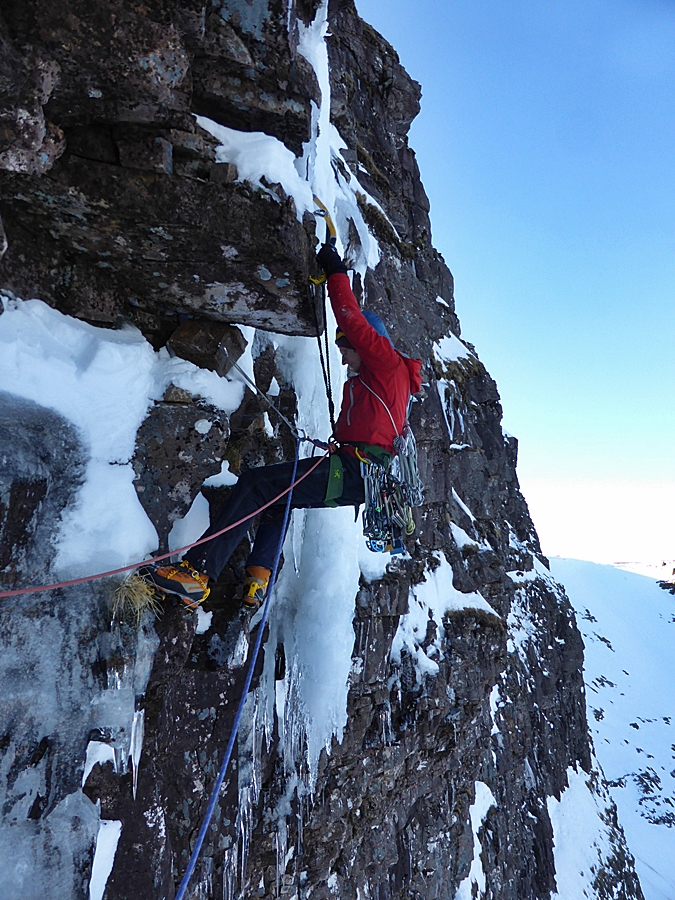 Later that evening after saying goodbye to Murdo I began the two hour drive back to the hut at Roy Bridge.

The two routes we had climbed were both 4 star classics and each great experiences, but the weekend as a whole had been more special than the actual climbing. Staying in such a wonderful place, with settled weather and remarkable conditions made me feel exceptionally privileged. Two weeks later, I would remember this weekend, but only on reflection after answering questions posed by Paula Wright for an Alpinist Magazine podcast called Threshold Shift, and can be listened to here.

In this interview, Paula raised a point from two of the articles I have written for Alpinist Magazine. At the time of the interview I don’t think I answered well, although in the interview I think Paula covers the issue and answers it better than me, but I have attempted to write a better answer here.

Some of what I have written in the past, and what I still write, appears conflicted, but that has always been the case, or at least in the last several years. To change one’s opinion, to continually asses, and reassess, means having an open mind doesn’t it? To change an opinion is not hypercritical, it’s been open to all opinions, and changing one’s opinion, when a better argument is presented, possibly means admitting things are different from how they were perceived at the time. My opinion about climbing changes often, almost on a daily basis, and will be swayed by what is happening in the world of climbing and mountaineering at the time, it will also change depending on my mood and recent experiences.

The pieces of writing that contradict each other, or possibly a better way to say it is, the pieces of writing that describe a different emotion from the one before, are taken from Alpinist 30, Into the Shadow and the latest article from Alpinist 57, Threshold Shift. Both articles cover death and loss in the mountains, and loss in the mountains featured quite significantly in our talk. Paula quoted me from Into the Shadow with the following;

“All I can think about is Tom’s question. What makes you want to put yourself in that position? I dig into the snow, looking for ice, for something solid, but find nothing. Two of my friends from the Shark’s Fin expedition, Jules Cartwright and Jamie Fisher, are gone. So is Phillip Lloyd from Pritchard’s attempt. In the valley, the losses make no sense. But up high, surrounded by thousands of mountains, something seems to expand, briefly, minutes swell to contain hours; infinity bursts within an instant; one life holds many lives, many possible ascents; one existence races along several paths, each way leading to liberation; and nothing good or bad ever ends. In such moments, mountaineering makes every sense.”

But then in Threshold Shift Paula quoted me;

“Lying in the little tent, I came clean with myself. Possibly for the first time in more than twenty years. “Life affirmation, the challenge, live life to the full….” It was true at some point I suppose, and still is for some, but now it all felt cliched. It felt like marketing consumeristic bullshit. The most honest answer I could conjure up is to know what you are and what you have to do when you wake in the morning: today I will walk to the foot of something that intimidates me, and I will begin to climb. But even this statement was untrue, even this was my mind’s marketing, because the real reason was for the after, for the adulation and acceptance and the slap on the back. It was all just a big erect middle finger. I’m getting mine, how about you? But at least I’m being honest, and possibly this is my answer, this is why I do it. Honesty is easy. Honesty is open. Honesty is a weight off. Honesty is no secrets, and once discovered, honesty is peace. Maybe I’m getting old? I am old. Trying to set the record straight.”

When I write, I attempt to write from a questioning position, one that will hopefully interest the reader enough into making them ask their own questions. I also write from a position that will make me ask my own questions, and in doing so will help me reach answers, or at least, form more questions and hopefully different answers. Sometimes I write from a position that I do not completely agree to see what comes back, but all of the time I attempt to write honestly.

I find attempting to answer the old question of why, especially when talking about loss, almost impossible. How can you justify the loss of someone fit and healthy, someone who had so much to offer, and how can you explain it to the people left behind? It all just ends up as platitudes and clichés. I think there is value to be had from not trying to explain because, as with many things in life, there are a thousand possible answers. At times the reason I climb is for the shear joy, the life expanding and at times it is in an attempt to be honest with myself, because being honest with oneself can be very difficult and climbing does help with this as long as you remember the real story when returning to the ground! And, at times, I struggle to come to terms with the whole climbing internet scene and the way some climbers appear to want to share everything they do, (whether they have actually done what they have said or not!). I become frustrated with the thinly disguised consumerism and self-promotion and retaliate with a big boast of my own, it is a big erect middle finger. For a very short period I may feel sated, but it isn’t long before I feel ashamed of myself and unfortunately it will no-doubt happen again in the future.

I’m pleased to say my final climbs in Scotland this winter gave me joy, satisfaction, and lasting memories and for that short period, I felt fortunate to experience some of the best of what life can offer and for this I’m glad I have climbing. 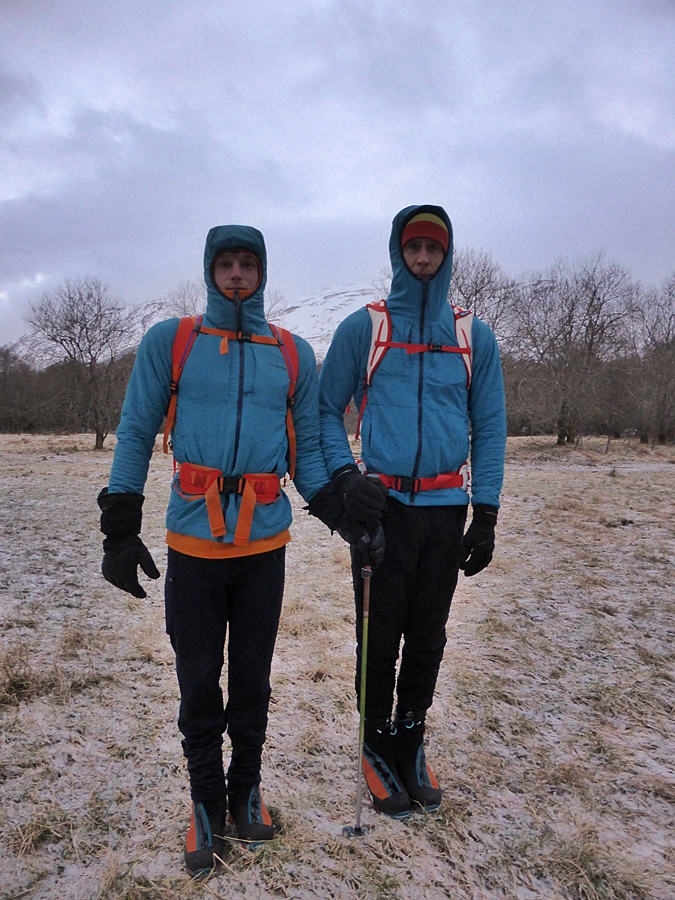 Brothers in arms. Pete Whittaker and Matt Helliker on the Fly Direct day. They really should make sure of their wardrobe the night before! 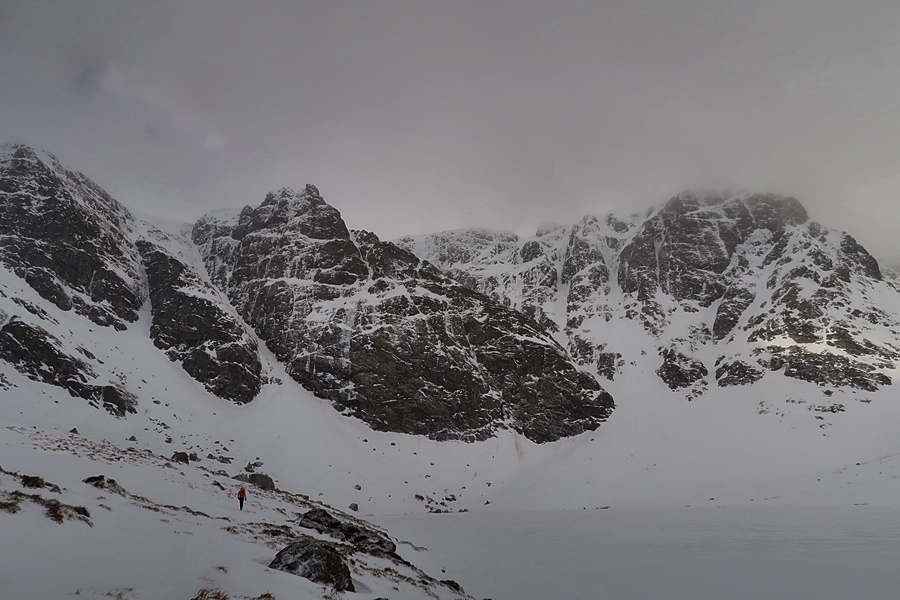 Walking in to Craig Meggy. Thanks to Andy Inglis for sending me a picture that stirred interest to go and have a punt at climbing the Fly Direct. 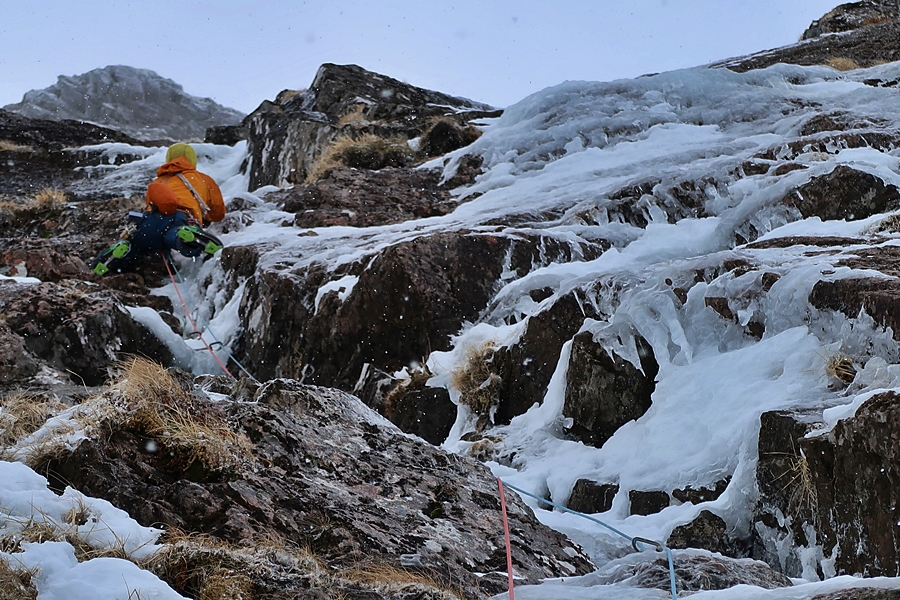 Myself setting off on the Fly Direct. It may look scrappy but it wasn’t, the route was one of the best of winter and in tremendous condition. We climbed it in four big pitches. Pic credit Pete Whittaker or Matt Helliker, sorry, I’m not sure who took it, maybe its because you both looked exactly the same! 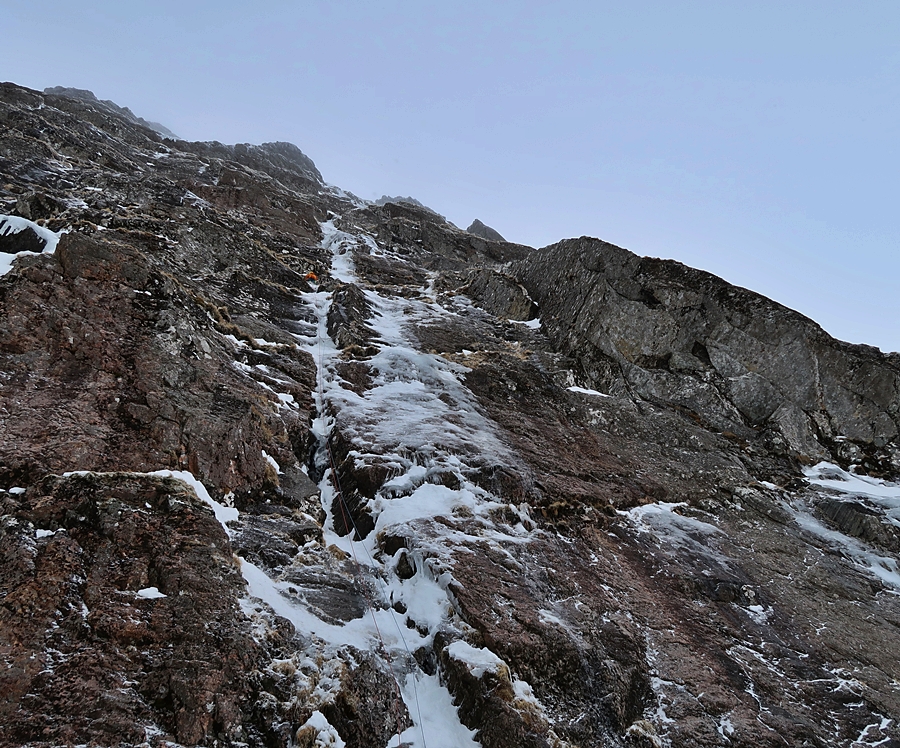 Myself setting the belay after climbing pitch one and two together. Pic credit as before! 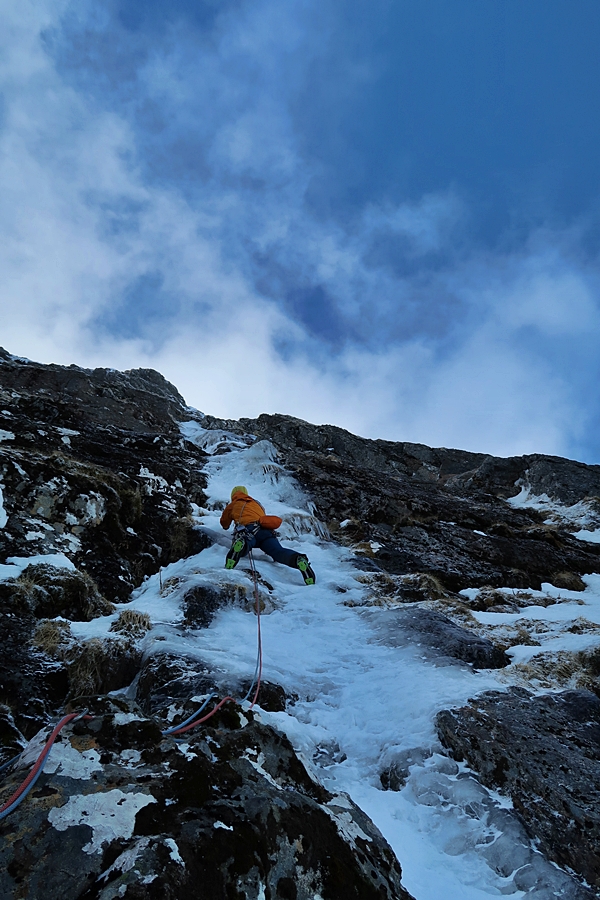 Myself setting off on the second pitch which was really pitch 3, supposedly the crux but it wasn’t, it was the closest I’ve come to climbing plastic Euro ice in Scotland. 🙂 Pic credit, Pete or Matt! 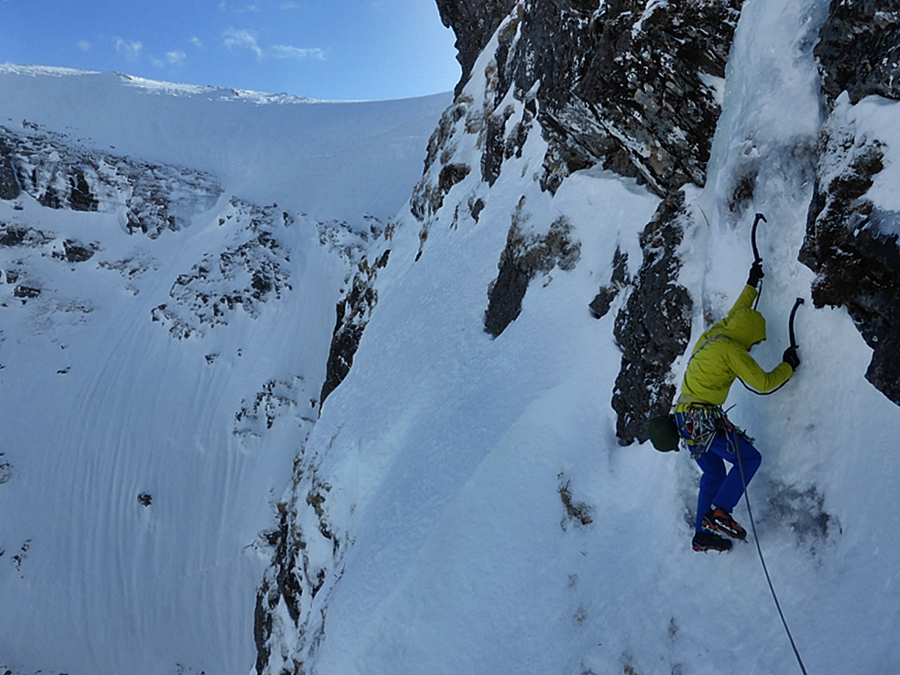 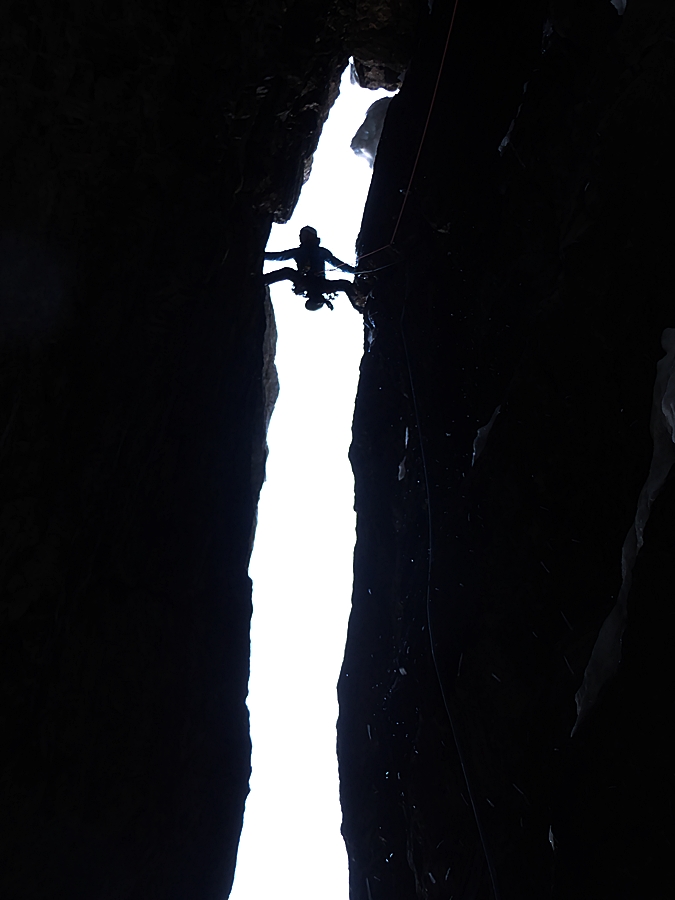 The day after the Fly Direct we went to Buachaille Etive Mòr and climbed Raven’s Gully with the direct finish. Well, I say we, I mean Pete led it all, Matt and I were still on a high from the previous day and it was too cold! The end of my Scottish winter with another 4 star route.